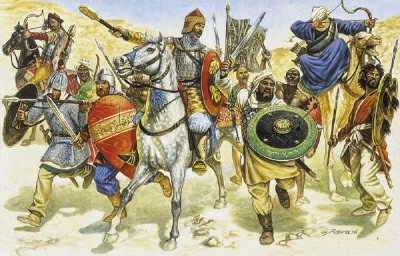 Sami H. was the man behind this Deus Vult -demogame and he came up with a nice set up and background for the game. Besides history,  tt's also familiar from the movie Kingdom of Heaven: Saladin is sieging Castle of Kerak and army of Jerusalem arrives to relive it. In the movie, there was no battle. Yesterday there certainly was! 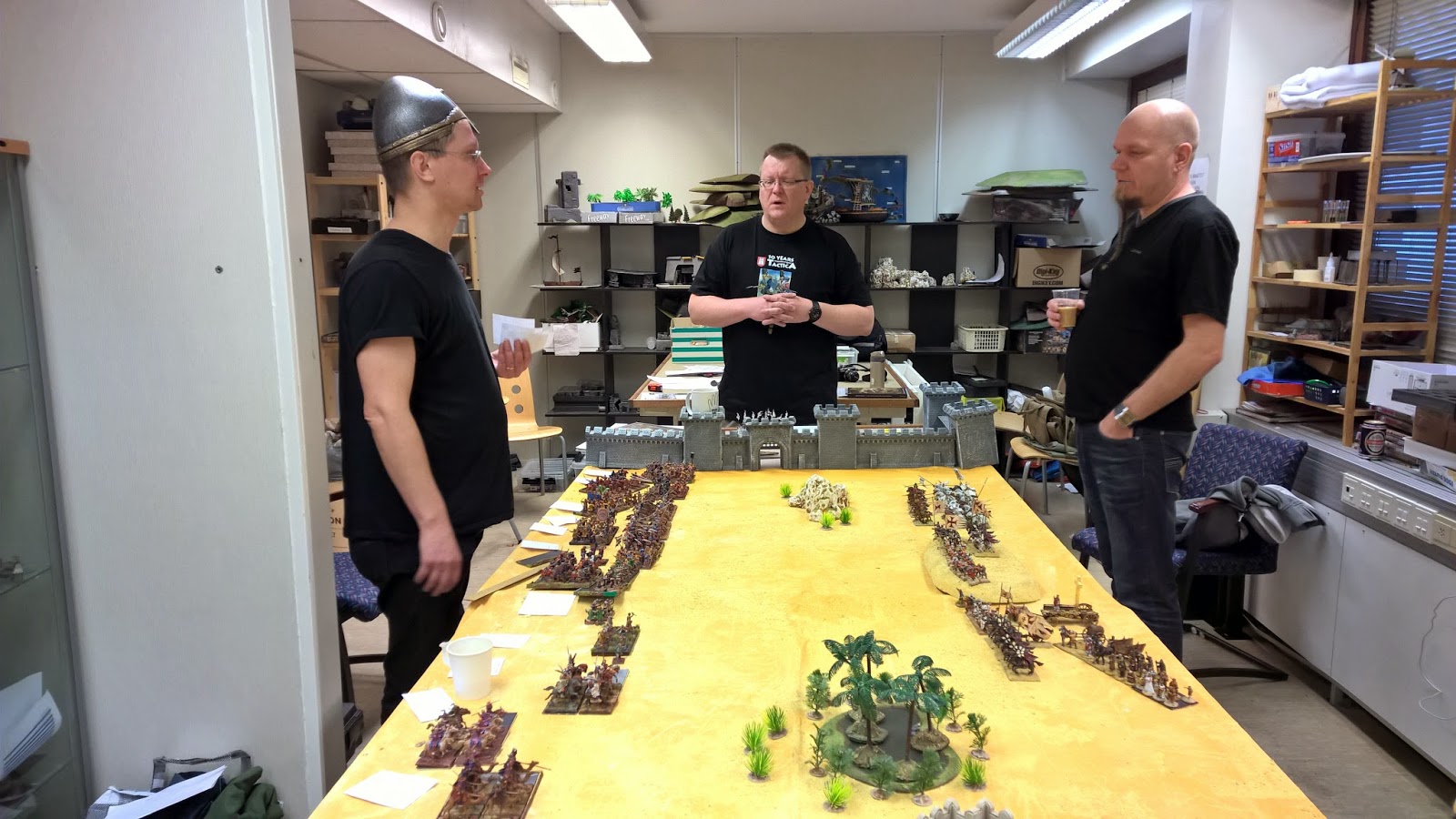 Set up (scouting, terrain and subterfuge) was done already on Friday to make sure we'd have enough time on Saturday. In the Pre-game communication our side (Saladin's Muslim Army) had communicated to our Umpire Sami, that we'd prepare for the battle by

* Poisoning all wells from Jerusalem to Kerak
* Trying to sneak into Kerak to cover our back, while battling against the army of Jerusalem

When it was time to draw our subterfuge cards, our fluff really turned into reality: we got sabotage:

"Choose one of the opposing player’s
divisions in the main force or rearguard.
That division’s baggage has been
poisoned, or the troops have drunk from
a poisoned well.
Each unit in the division must test its
by any battle leader, and if a unit scores
casualties if an infantry unit or D3
casualties if a cavalry or skirmishing unit."

Crusades certainly had an ace in their sleeve as well: they had chosen forced march and surprised us, while our troops were still getting out of their tents, the crusades were already approaching us in their battle formations! We didn't get any vanguard and all of our divisions had to test for disorder... damn.

Kallah Al-Manna, as my comrade in arms, and me had had a clear battle plan: slow their hard hitting knights down and then succumb them with our numerical superiority. Crusader's smart tactics messed this plan  before the battle even started, but we still had a few aces in our sleeves: we had seize initiative -strategy (?) and could steal initiative on a round of our choosing...


Then the actual game started and first initiative was rolled. Surprisingly the crusaders weren't in any hurry to move forward to take benefit from the chaos that about half of our army was in, including my whole division. 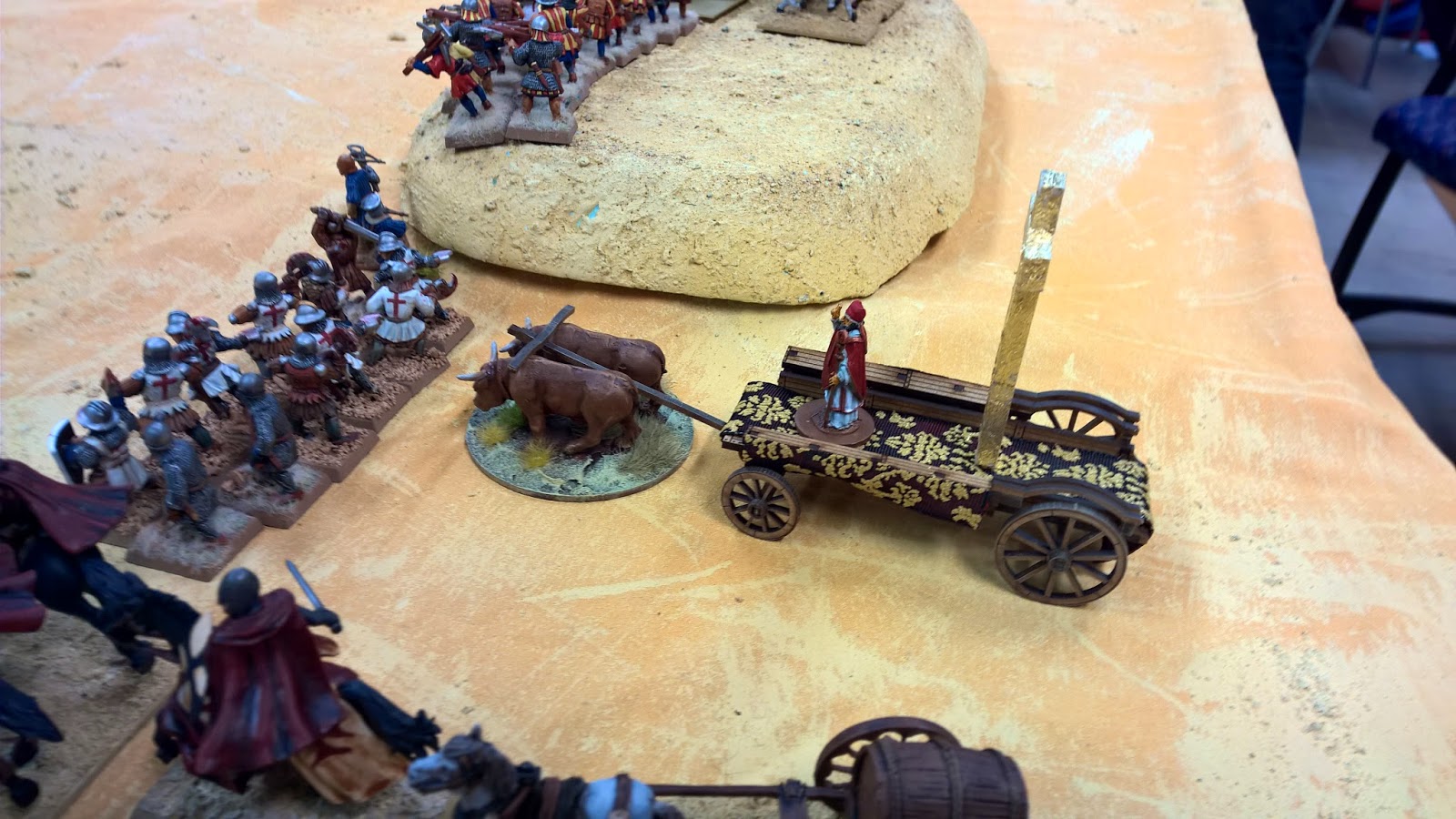 The True Cross lurched on and drove the knights into a true killing rage. We should have gone more aggressively after this small wonder (very nice piece of work from Sami), should we have realized it's effect earlier! 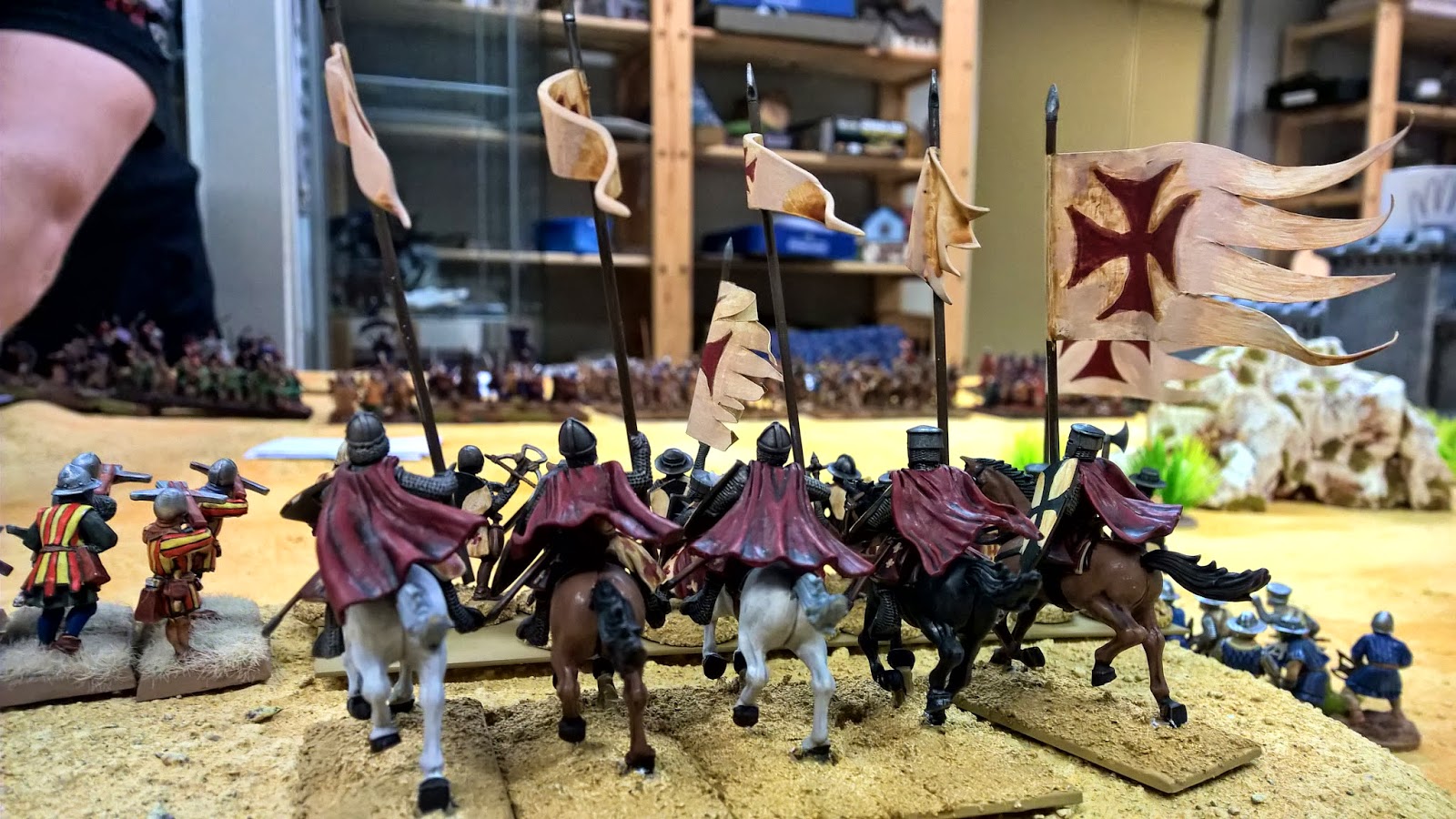 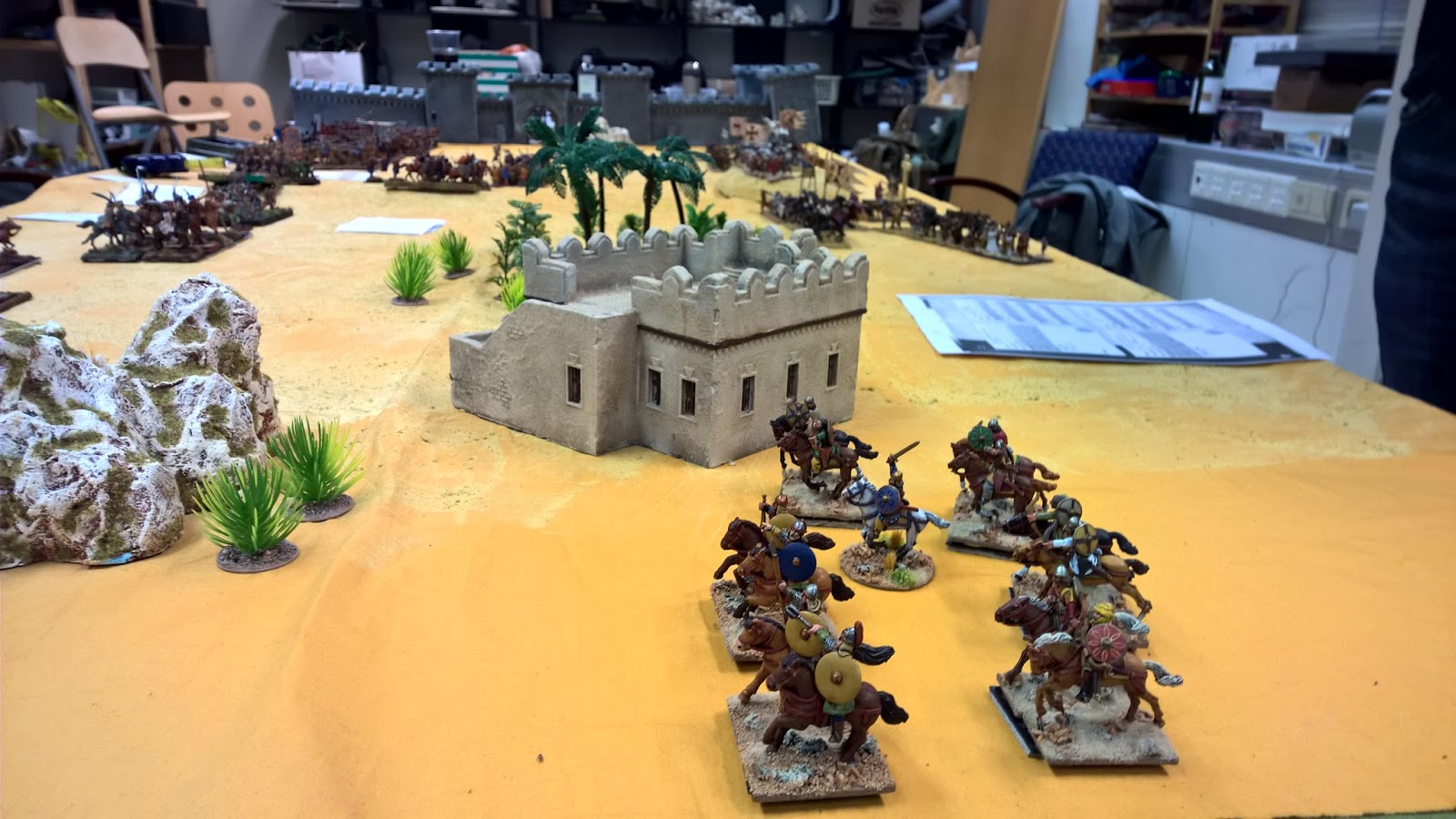 Crusader's skirmishing divisions' Turcopoles moved fast in from the left flank... but we had refused it, so they didn't really have much of impact to the game.

First round mainly saw the muslim army redressing it's ranks and some arrows and bolts being exchanged. Several rules were also learned and some played wrong...

Muslim army got rest of it's units back in order (this had already created a quite a traffic jam) and first combats we're initiated. 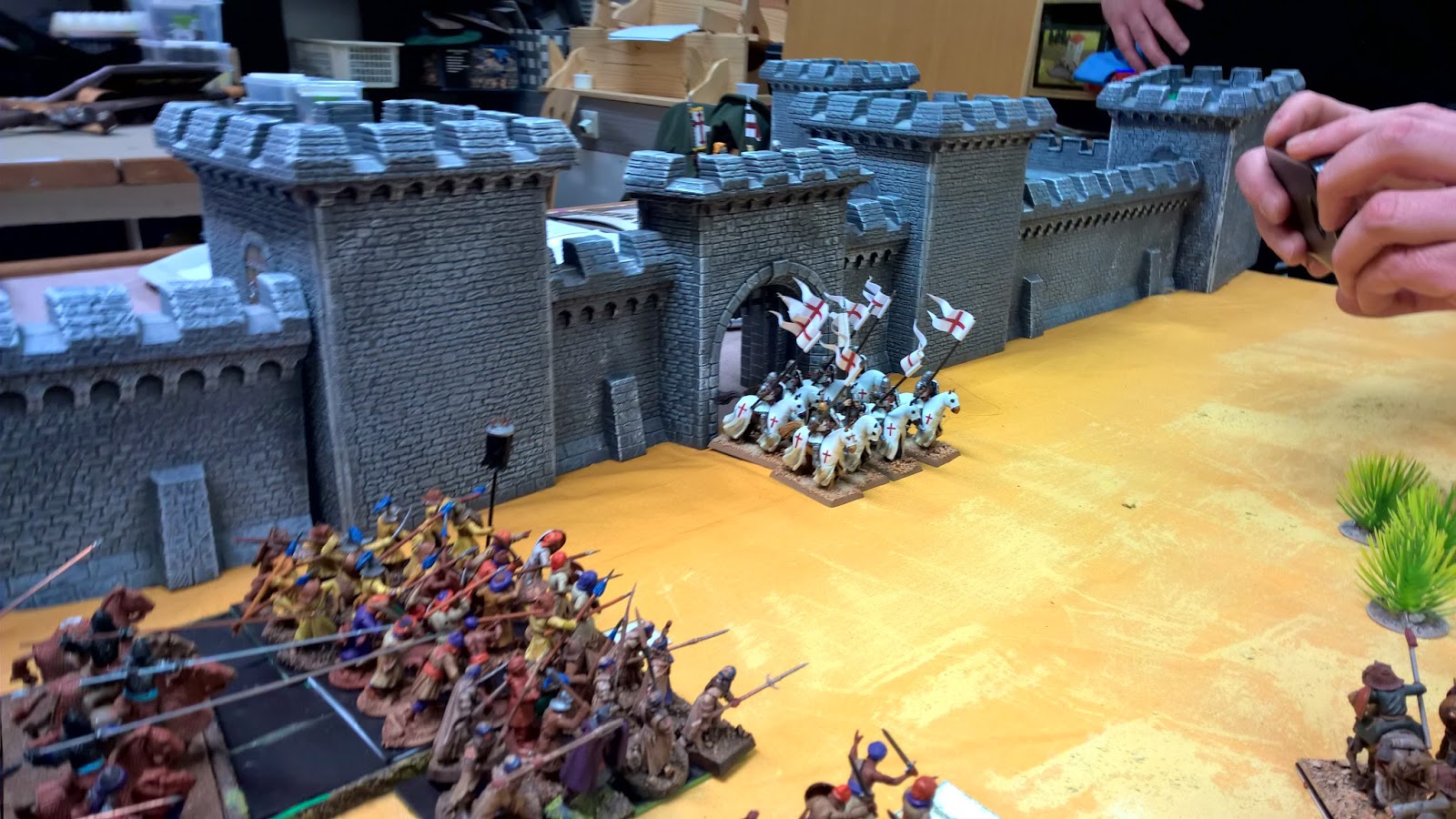 Outflanking knights sally out from Kerak. Our left flank hadn't really moved forward at all, and to make matters worse, our Arab "heavy" cavalry was placed BEHIND our infantry. Not so smart move by Saladin (alias Kallah Al-Manna). Luckily Saladin sent one of his elite Gulam units to help the left flank 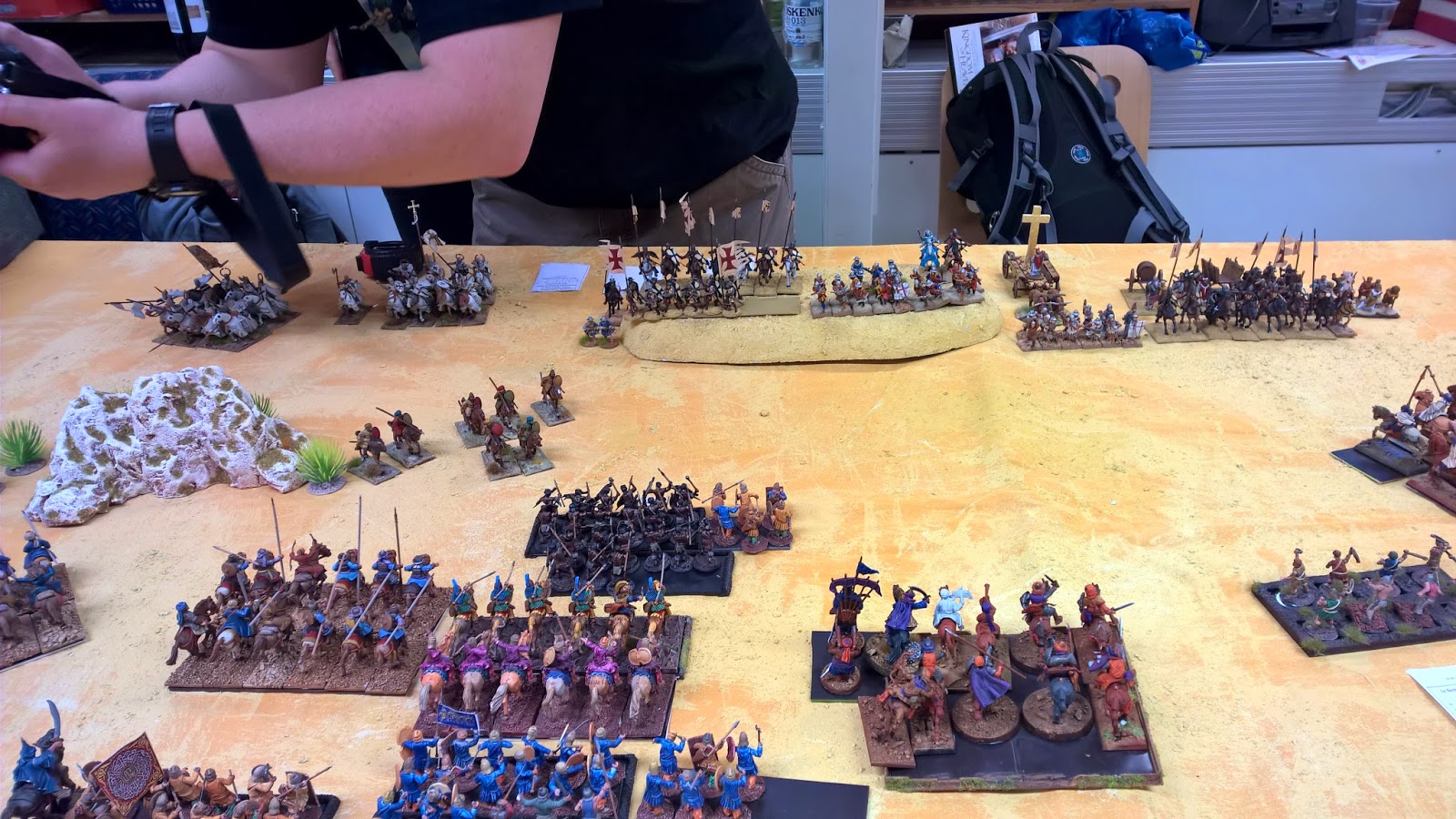 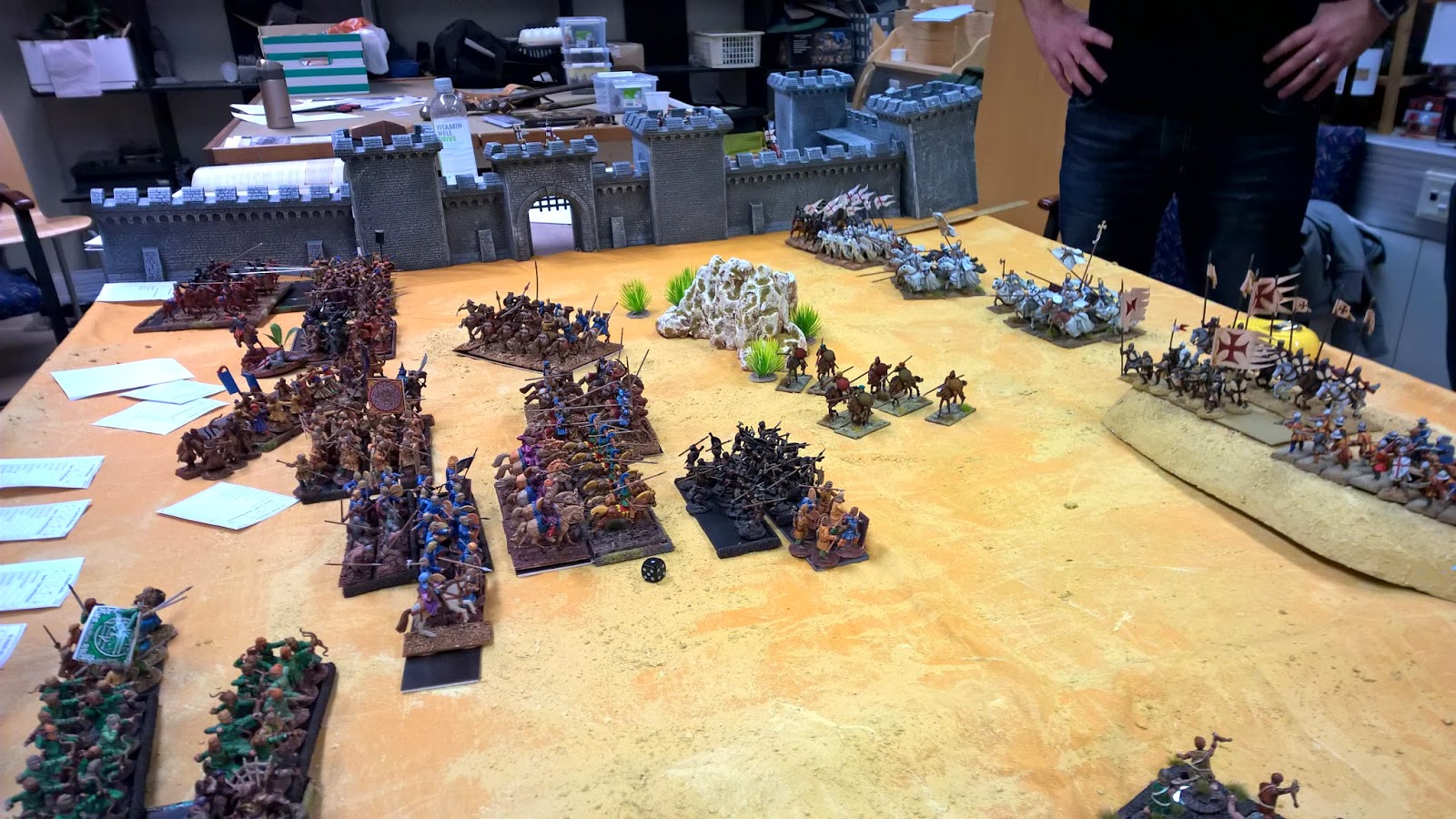 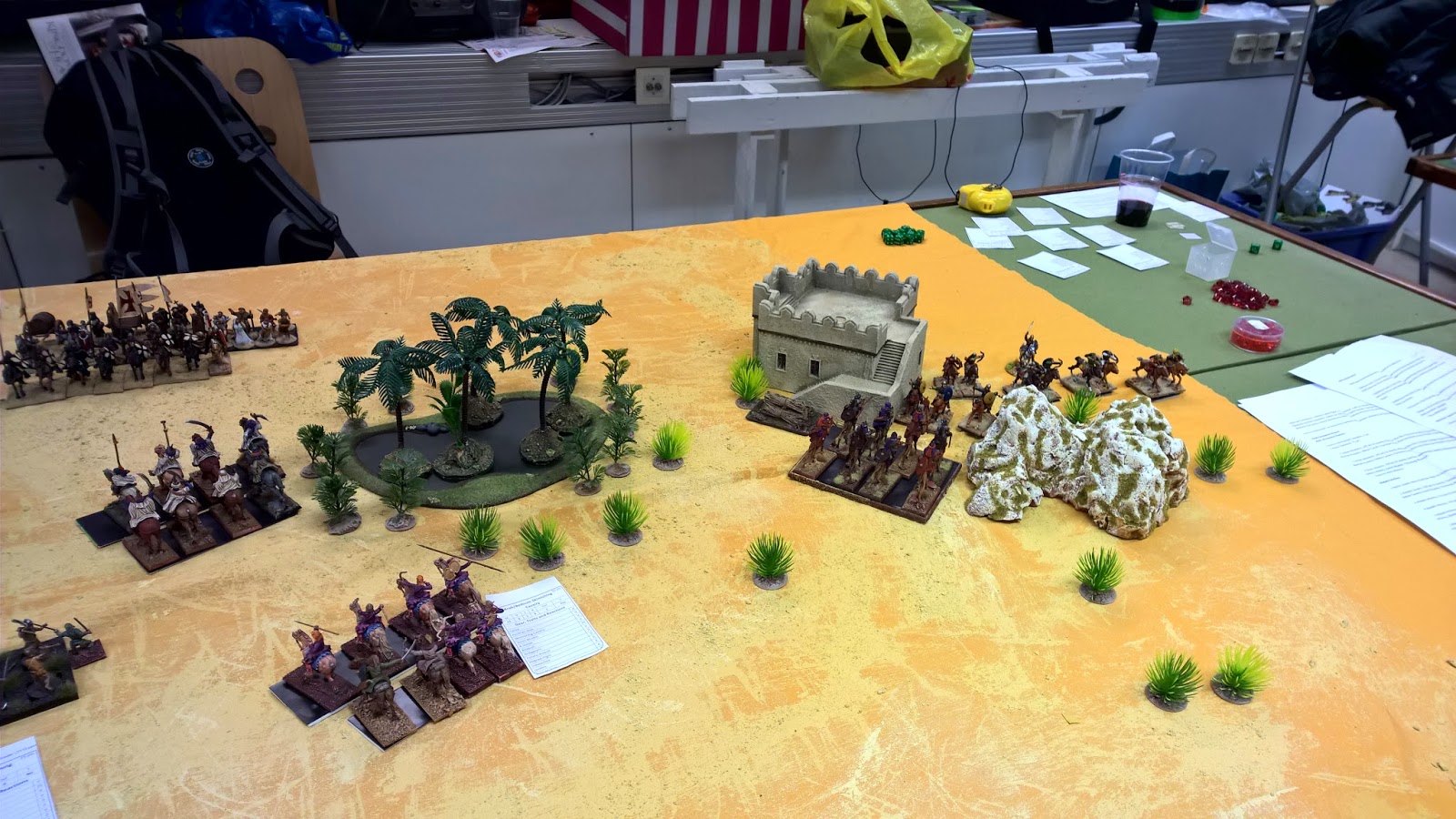 One unit of Beduine  cavalry held the right flank and released rest of our skirmishing division to support the push in the middle - which they very nicely did! They had the chance to go after both the King Baldvin (whom was captured) and the True Cross, which was run over and destroyed!

This was the climax of the battle with several units being destroyed on both sides and heroic duels fought. It seems that nothing could stop charging Teutogen knights. 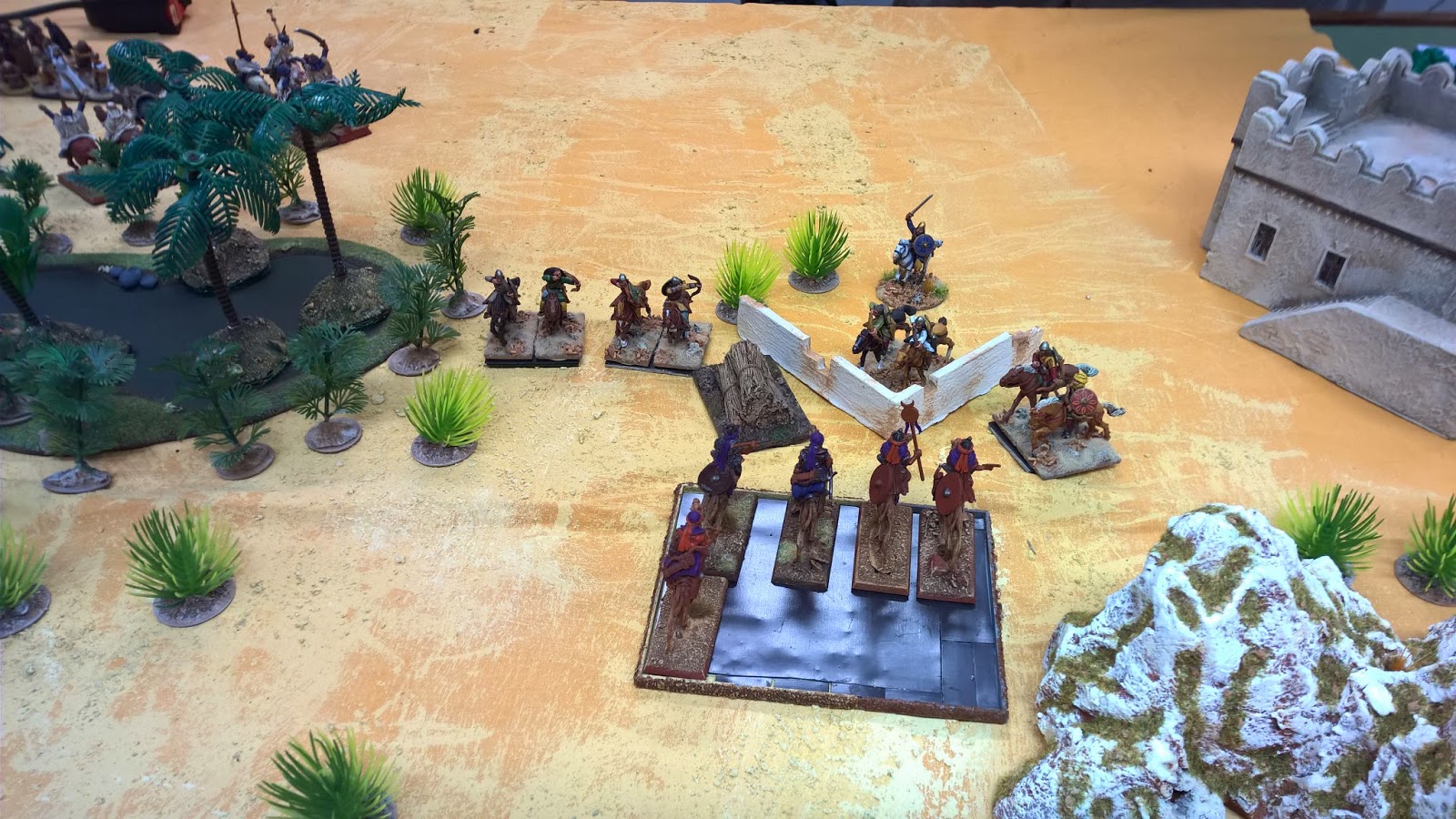 My Bedouine Cav in the right flank tried parthian shot + evade tactigue, but were caught and destroyed. Not a good tactic if the enemy is this close and fast I duly learned. 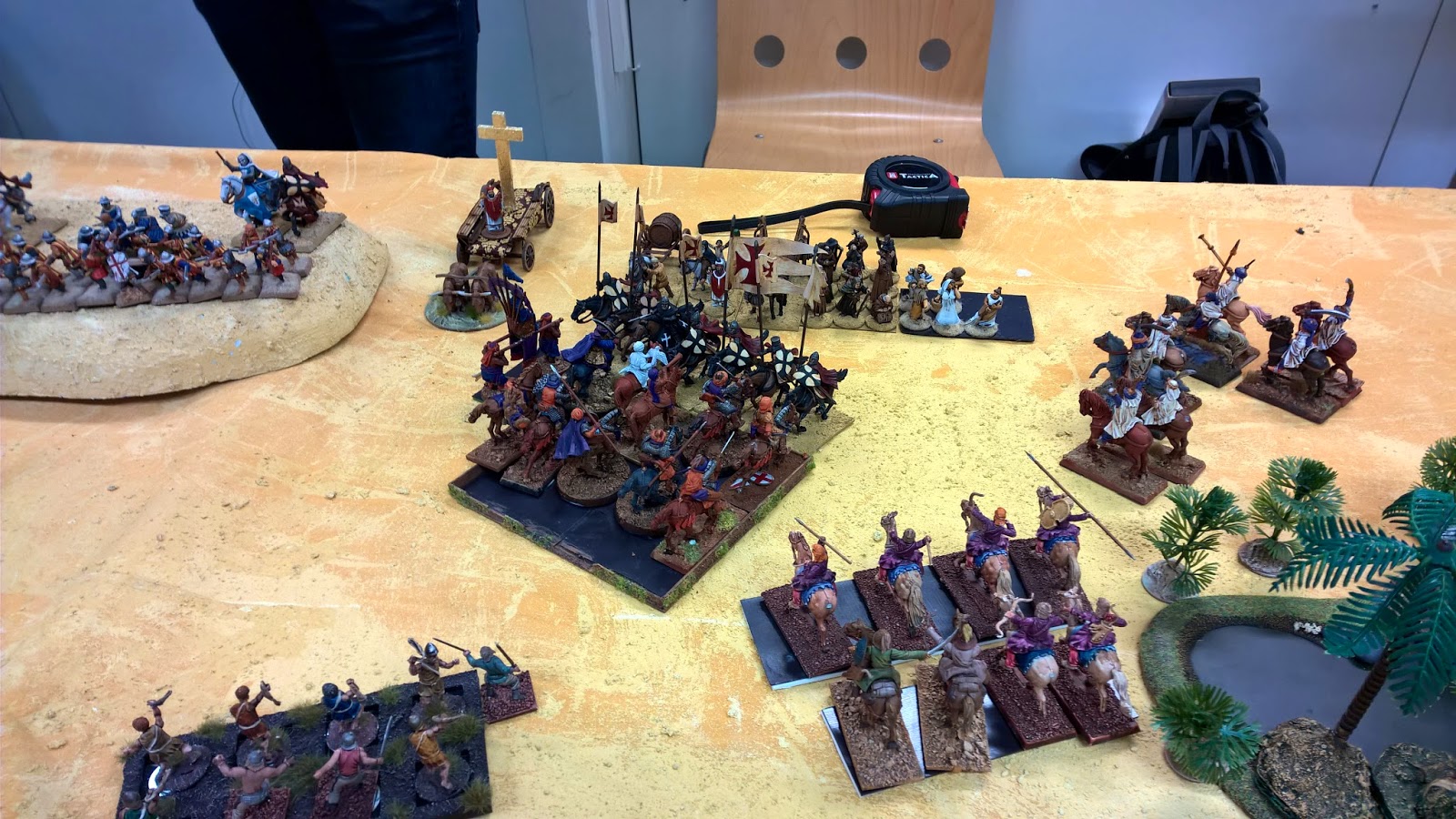 Crudader's center being crushed... The True Cross will soon meet it's vanquishers!

Unfortunately I don't have more pics ( it got so bloody AND intensive ) and  had to leave after this. I  left our army in the experienced hands of my battle comrade Kallah... things looked good - victory was within our reach!

So something went wrong after I left...

So too many valuable knights units were obviously left on the table. They are a hard kill!

Other views reports about the game:

Kallah's video here (you might want to turn of your volume first... ;-))

I'm not sure about:

? The rathed rigid movement -for example Hail Caesar is far more relaxed
? Only the charging unit striking close combat blows when they charge, the other side can break without a single strike back. Then again it makes planning the activation order of your divisions even more exiting.

Looking forward to our next DV-game and the Mongol supplement I've heard they're going to publish!