After two weeks of traveling with family in search of VIKINGS, I was itching to get back into painting and gaming! Reading the latest WI had heated me up for the coming Club Hail Caesar Campaign: Mare Nostrum (in Finnish) and for putting together some figures for the Three Musketeers (see a separate post / project page for that). 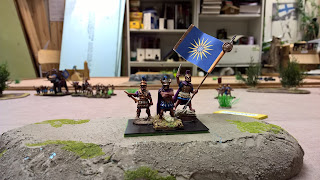 So we decided to have a rehearsal game with Kalle to test the first scenario as well as refreshing our minds on Hail Caesar -rules (I've been playing more Black Powder this year).

We agreed on 400 points game. I had three divisions and Kalle four (one of them cavalry only). My Ptolemian divisions were as follows:

3. Div.
Damn Army Builder stated in my print out, that my Agema cavalry would only move 6" instead of 9". This seriously hindered my advance, but fortunately didn't eventually ruin my game. Next time they'll be faster!!!

both armies had 3 small scout units. One on each side was chosen as the one with a critical message / mission. Victory points were awarded as follows:

Since HC doesn't have any rules for deployment we we decided to copy our approach from another game: I would set up first and get the first turn (unless Kalle would steal the initiative with a 6 on D6). So we deployed.

I had my my general's division in the middle, 2nd division in the right (with elefant and chariots) and the 3rd division on the left. I deployed all my closed order infantry in columns. Kalle chose to deploy with a "refused flank" strategy and placed everything on his right side part of the field. Horse archers on the front right, heavier cavalry next to them and infantry as the second wave. Greek mercenary hoplites were clearly deployed as a reserve. 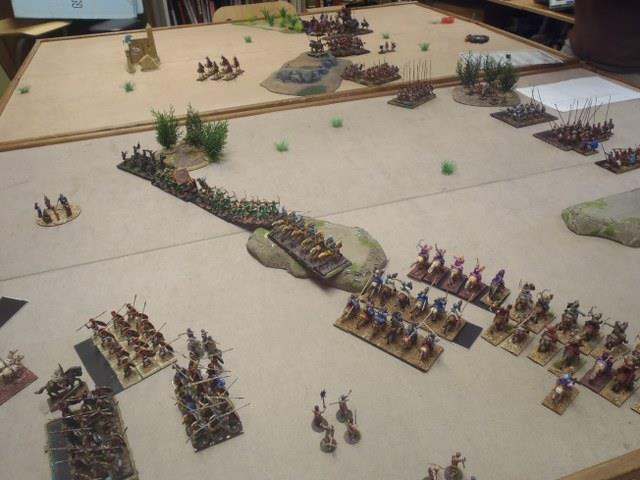 Situation after the first round. Still showing the original deployment quite clearly

In the beginning of the Kalle had the clear advantage due to his cunning deployment. Two of my divisions were far from any action - and they included most of my cavalry, chariots and the elefant. Hence Persian horse archers pushed forward and started raining arrows on my troops. Luckily they weren't very effective, even if my several break tests were rather bad with several retreats etc. 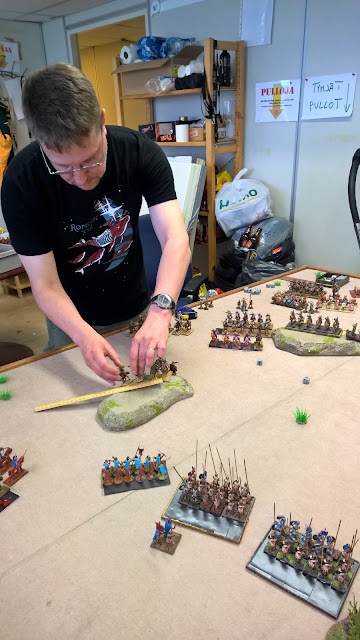 In the meanwhile my other divisions were force marching themselves towards the enemy, but with a frustrating slowness: only one move in each of the first rounds! Kalle's deployment seemed to work except for the fact that my scouts were all on the right side and tow of them, including the chosen one, had open field to cross! 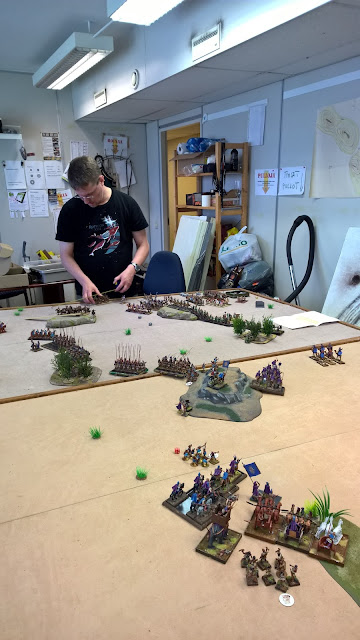 My right flank slowly advancing (my cavalry used 6" move insread of the correct 9").
Scout units with the round marker have a free ride
to complete their mission! 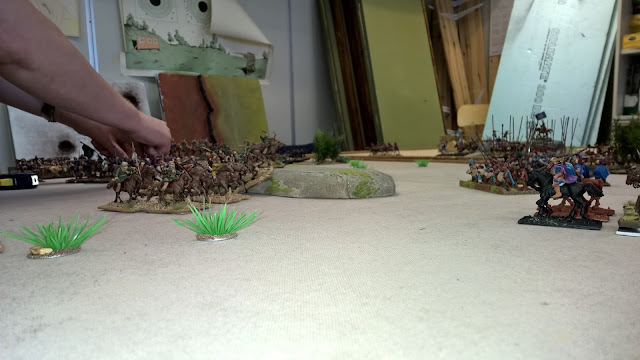 My ligth cav made one charge to try to drive the horse archers away - only to be panicked due to closing fire and duly retreated  back.
Later they succeeded in taking out one of the Persian scout units.

My 3rd division halted it's advance to wait for the other divisions to join in. In my left flank those damn horse archers kept harassing my infantry and shot my Thracians so badly they got shaken - they were fortunately rallied by my commander. Then they proceeded to take cover behind my phalanx, that would survive missile far better (-1 to hit on heavy infantry and 4+ morale save). Alas this was not to be: horse archers fired on the phalanx and they duly rolled 3 in their break test and scattered in panic. And they were supposed to be veterans!!! 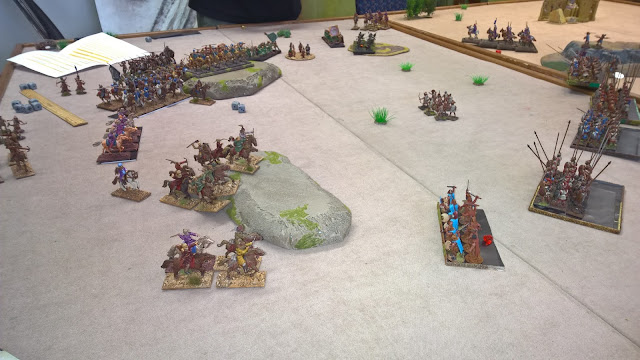 First elements of the right flank divisions are joining the battle on Persian left flank that is surprisingly weakly protected. 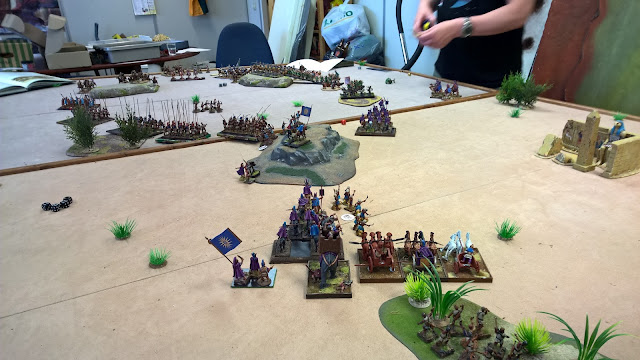 My 2nd Division is still far behind and the artillery crew is sweating to
drag their machine into firing range (it fired once during the whole game)...

Kalle started to realize that soon his flank would be engaged (probably since my camel riders and one Agema Hvy Cavalry crushed his Nubian skirmishers on their extreme left flank) and turned his infantry to face the oncoming threat. This was the signal to my remaining troops on the left flank - advance! Now we would crush the Persians!

Several of my units were in range to reach the Persian battle line with three moves (even with my Hvy Cav using wrong move value of 6"). So my 2nd division commander gave a divisional command: advance and engage the enemy immortals! Tense silence fell over the battlefield as the command dice clattered on the table... three moves it is! MY light chariots and two heavy cavs ploughed (even if we didn't use the wedge rule) into enemy lines - well supported! 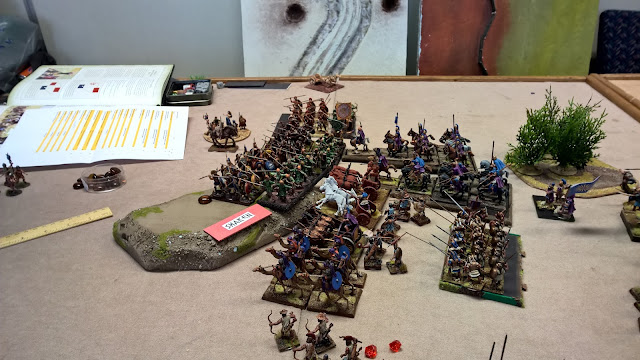 A furious combat followed seeing the immortals soon shaken (they had taken few hits from Cretan archers already) and break! My chariots and their support pushed forward to engage the damned traitors behind: Greek Hoplite mercenaries! 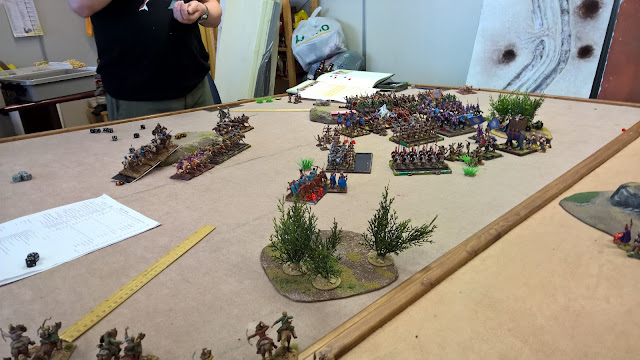 Persian cavalry looking from the distance as the Ptolemian army crashes into their comrades...

It was time for the Persian retaliation: left flank infantry successfully maneuvered into the flank of my Agema Cav. and  Persian cav. maneuvering into position to threaten the other flank. My Agema Cav. succeeded in defending itself to a draw. Shaken immortals to their front succeeded in their break test. Chariots won their combat against Greek mercenaries with a tight margin and this was also a draw (phalanx special rule). We didn't remember, that Greek mercenaries have long spears and my chariots would have lost their charge bonus and should have tested for disorder - one of the many rules forgotten... 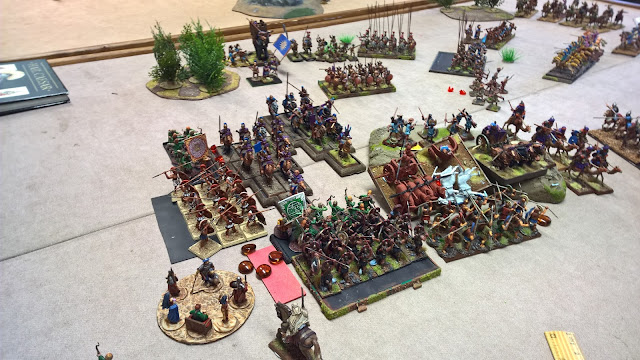 Our time was up and we called it a day. In a gentlemanly manner Kalle admitted defeat, due to the fact, that my army would have grinded his to dust before his cav could have helped and my scouts were all making their escape. I had managed to take one of the Persian scout units - possibly the chosen one...? 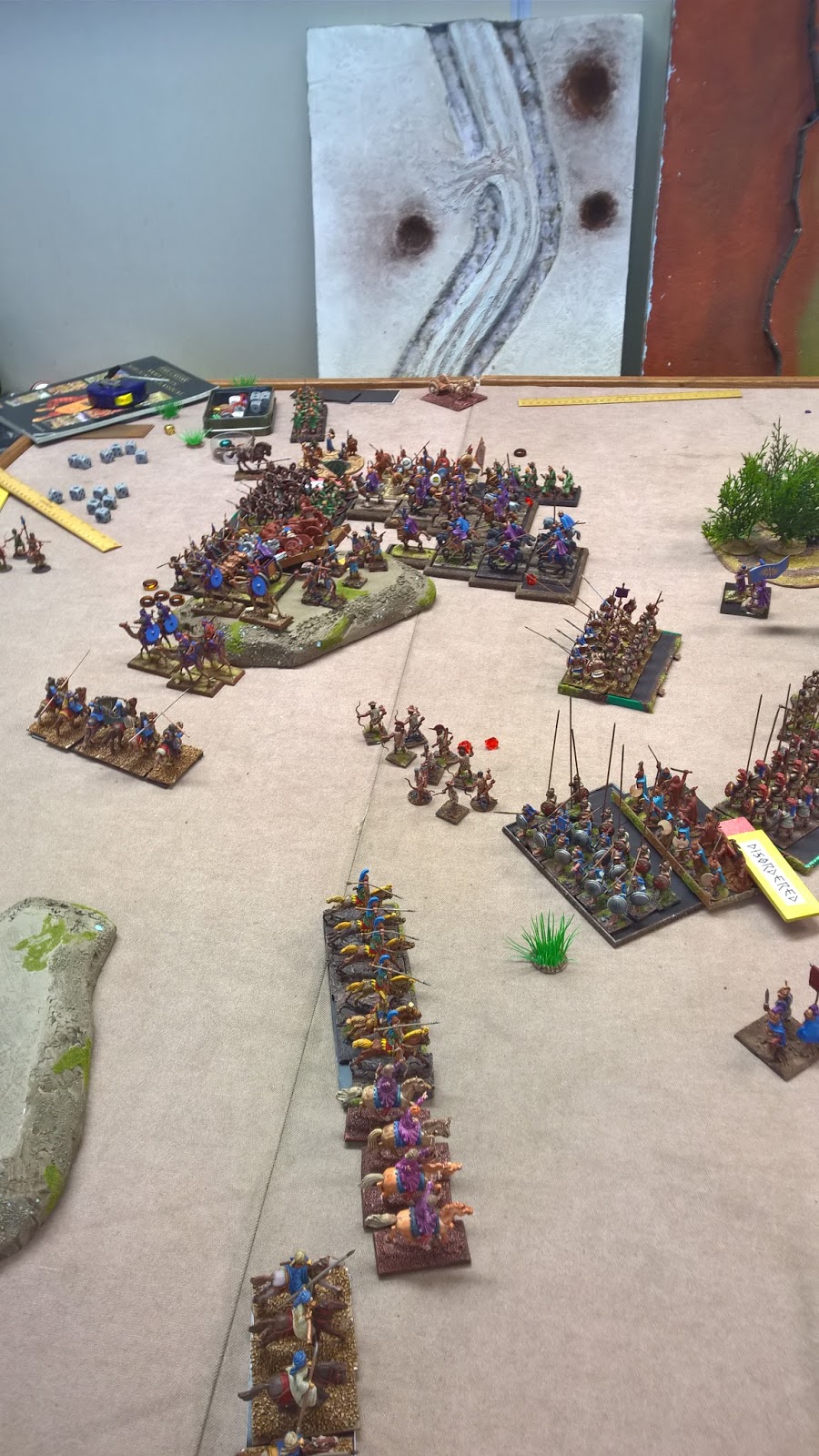 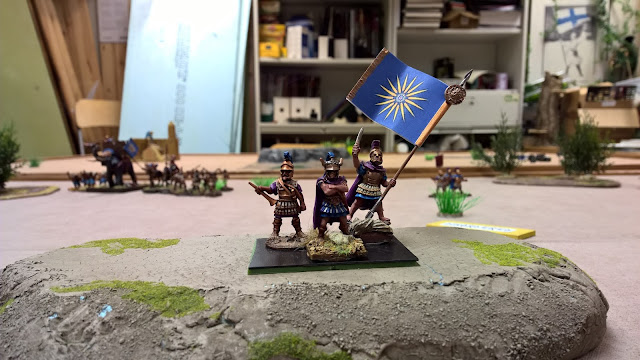