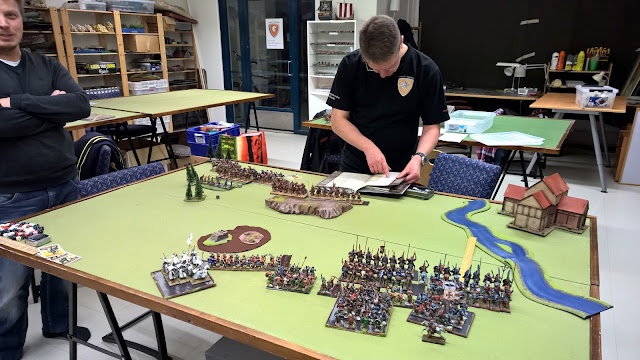 As a surprise to us both Novgorod army bested the mongols in this 1350 p. game. Main reason for this was the fact, the one Mongol division was outflanking and failed to arrive until it was too late - the two divisions on the table were shattered and the clock was late as well (we needed to check on the rules too much).

So here's a brief summary of events...

Mongols had of course totally ruled the scouting phase...

I started the game by a successful ambush. My Russian skirmishing archers were hiding in the woods and immediately send one mongol skirmishing cavalry packing with their ambush shot. Then they managed to hold their own throughout the game against another one in melee... unit of the match! 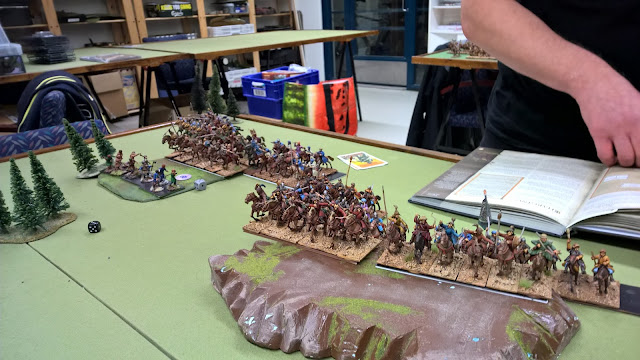 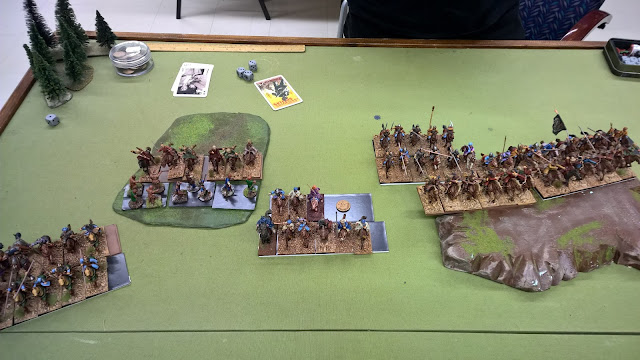 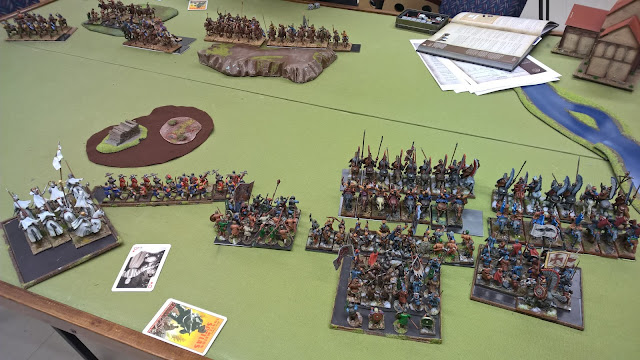 Novgrod with their German mercenaries (on the left) densely deployed in the right corner of the battlefield. Using the river as an anchor for the right flank. Rivers are a special feature for Novgorod army. 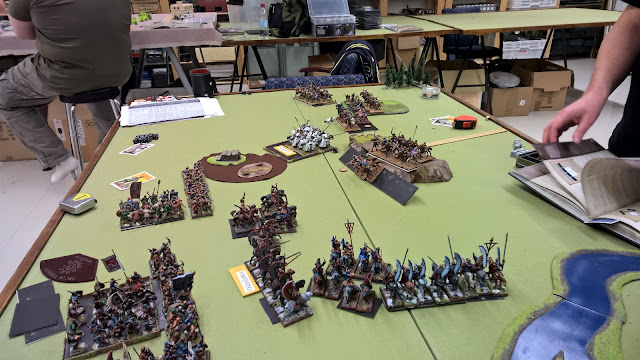 I got the initiative and proceeded to shoot with my cavalry division - druzhinas are great: they are heavily armored lance cavalry with the bonus of bows! Soon the fore most mongol units were taking toll of my arrows... 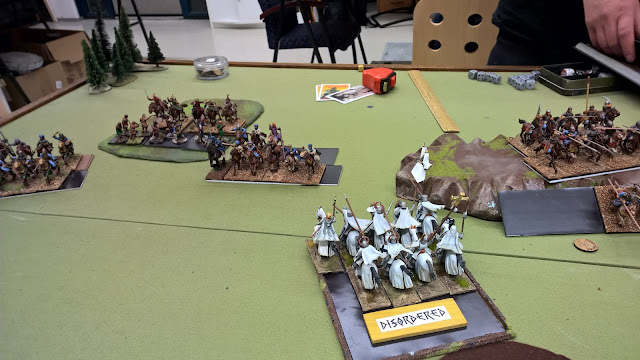 Then of course the impetous German Kights went on a rampage! They charged a mongol unit to their flank (My commander tried to restrain them!) and wiped them out. Naturally they were disordered in their sweeping advance... 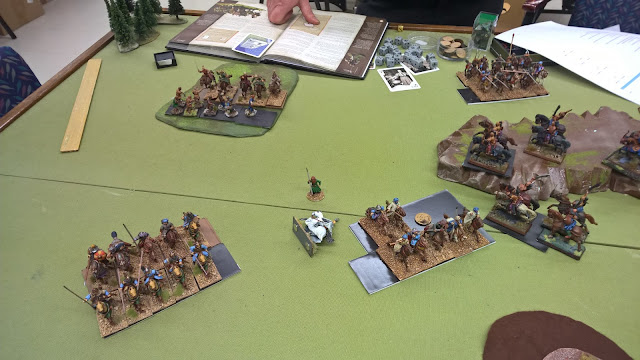 ...And were then destroyed by a counter charge of heavy mongol cavalry. Their commander managed to beat a mongolian commander in duel, before been overrun... heroic, but stupid! 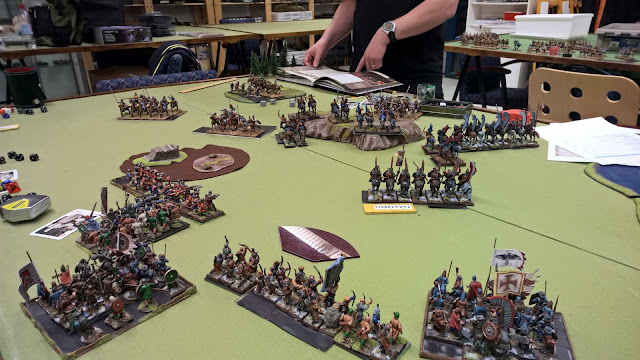 Another won initiative and my cavalry pushed forward. Slowly my infantry also woke up... should we actually join in this fight? 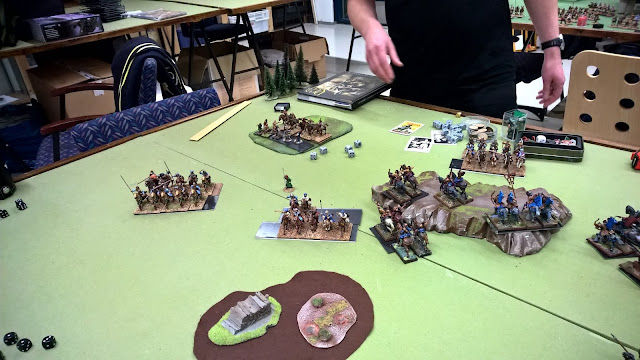 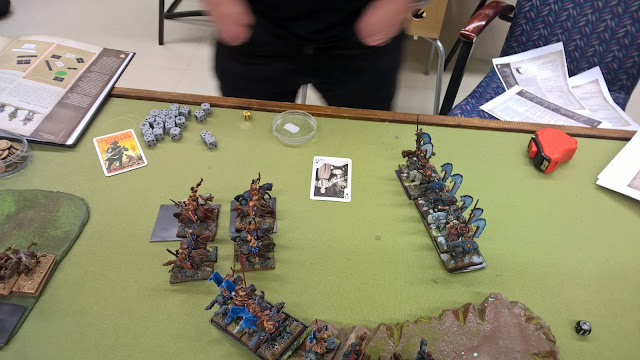 My next round saw the beautiful combination of fast nomad horse archers disordering a large unit of mongol cavalry and then the Junior Druzhinas levelling their lances and delivering the killing blow... You can see my opponent already putting his hands to jean's pockets... the game was pretty much in the bag. 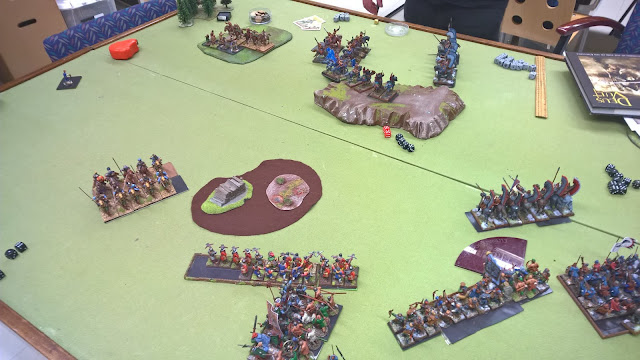 The game saw a one more charge from Mongols against my German crossbowmen. It looked bad for a moment, but then I remembered, that one can shoot into close combat (to flanks that are not engaged). I managed to disorder the Mongols with blacken the sky and after that my crossbowmen were able to mob up the remaining Mongols.

I guess we didn't get the full picture of Mongol army list potential, since the outflanking division never arrived. Just recently FireForge games released the updated Mongol Army list on their website.

The changes for the now released list seem good... based on this one game experience the Mongols were too few to take on the Novgorod, that also had plenty of shooting. My infantry units didn't even get to fight and Mongols were dropping like flies in my hail of arrows and crossbow bolts. In the official list they have few more special rules and the units are cheaper.

Check out the Forgestarter as well for a  new range of miniatures for Medieval Russians. I think I will participate!