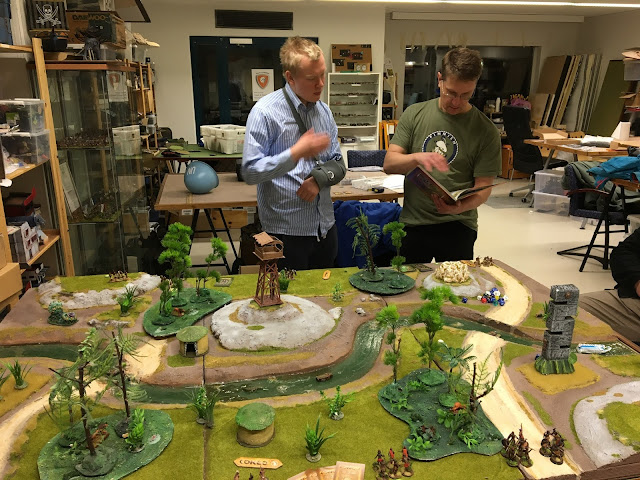 Kalle had been the first in our Nopat -club to acquire the quite new "Darkest Africa" game Congo by Wargames Foundry and Studio Tomahawk  .
So far there had only been excited discussion on our facebook discussion group focusing on not so main stream "eccentric" games. Now Kalle had taken a decisive action and announced a demo game to held. This led to 5 club members to announce themselves to come and play or watch. I "volunteered to play" and  this lead to frenzied painting to some African Forest Tribe warriors I had started earlier...

Some pictures on my WIP miniatures for Congo: 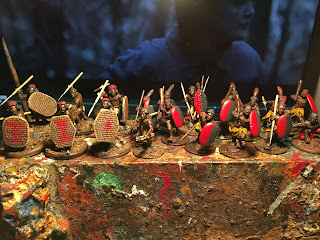 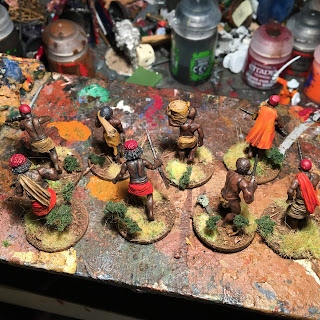 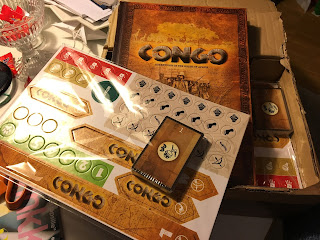 Kalle had prepared "columns" for each player. Here's my roster: 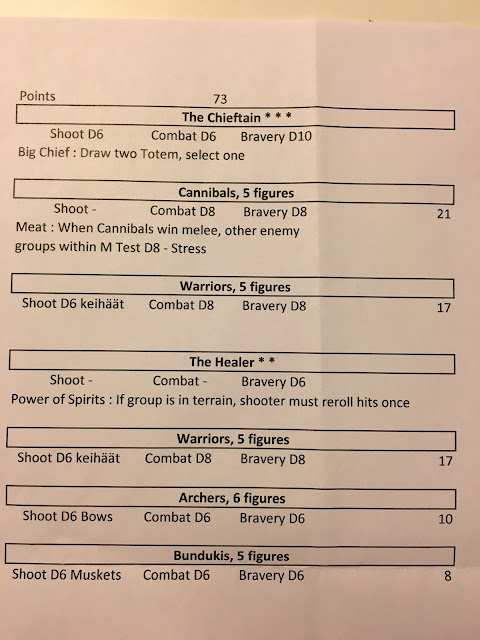 Mikko, just back from serving in the Finnish army, was my opponent guiding the White man's expedition... (doomed to die horribly!

Set up and start

Great tribal chief Mjubunga had heard alarming reports on white men and their henchmen moving into the Masai territory looking for valuables to loot and living things to shoot. It was time to act; Mjubunga sent his son; Lumjumba to investigate with his best warriors...

Soon our forces were deployed and first three (random for the first round) dealt. I got to pick two totem cards and pick the one I preferred due to a special rule of my big chief. My first round tactics were to sew terror into my enemy's heart and then move rapidly AFTER Mikko had moved... 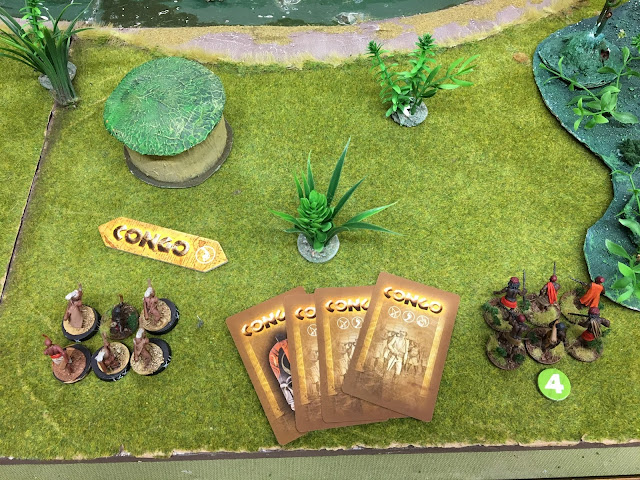 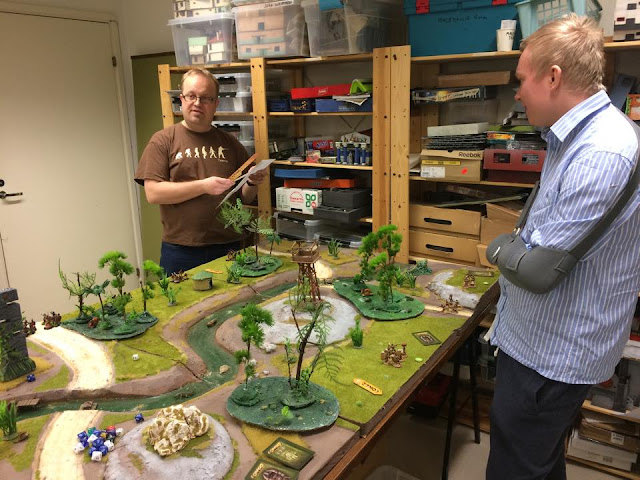 Lumjumba led his elite warriors (known to eat the raw hearts of their enemies) supported by another group of spear & shield wielding braves. They proceeded rapidly towards the river, unawares or rather unafraid of the Simba sleeping in the jungle. 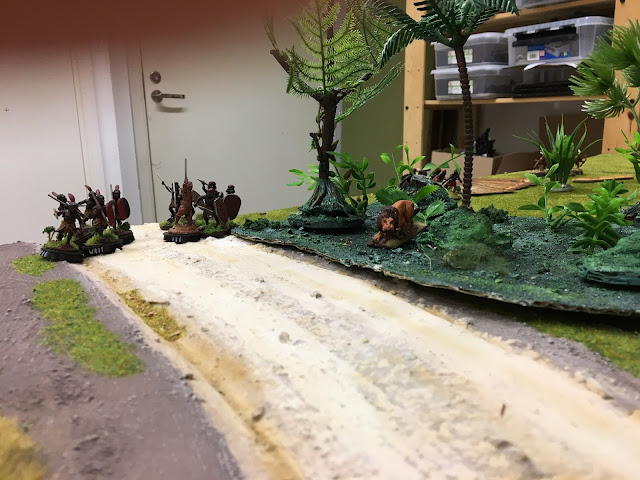 Soon they saw the first loot gleaming in the river (Lumjumba was thinking: "Why are these valuables
left in the river... there must be something more here than meets the eye".) 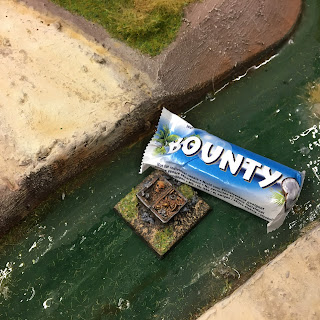 The terror tactics also worked nicely as the traitorous Azande warriors helping the white men were frozen to their starting positions! 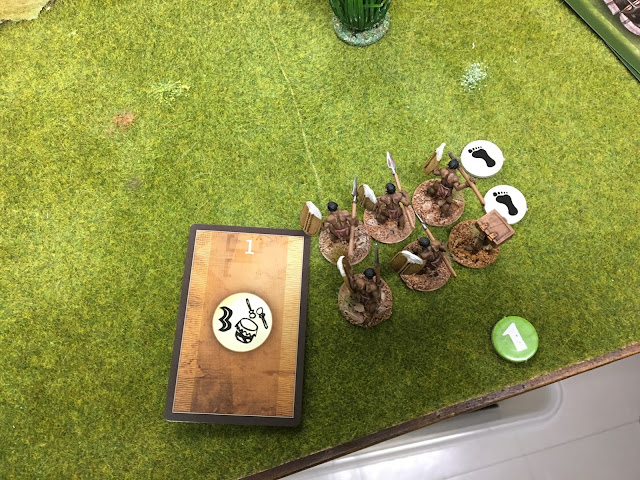 Positions after the first round: I had placed two groups in the cover of the left flank forest, while my chieftain led a strong warrior party towards the unit of soldiers in the right. My musket wielding Bundukis took a central position. 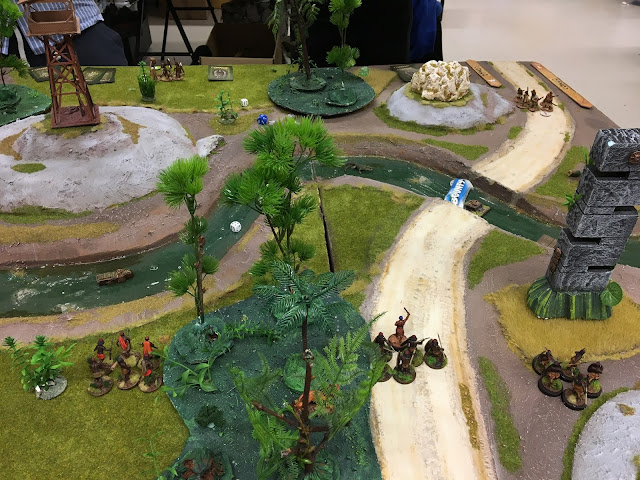 Lumjumba could see first glimpses of the approaching enemy, even if some
of them hid themselves in the forest 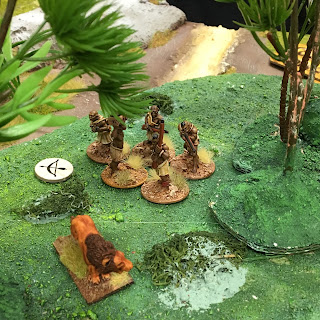 Lumjumba and his two groups of warriors arrived to the river 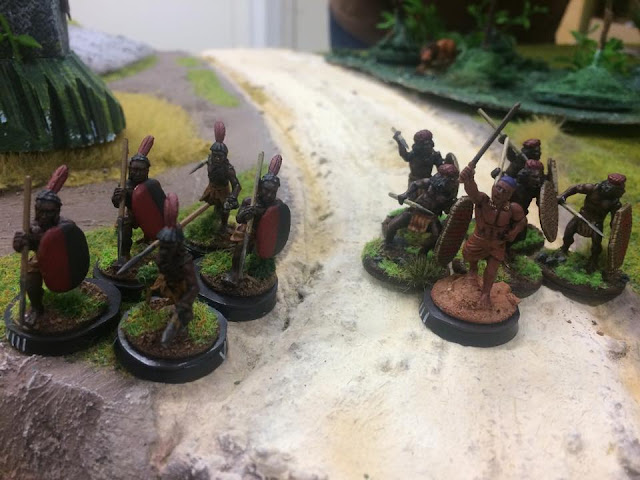 Lumjumba commanded the spear equipped braves to capture the loot in the river... 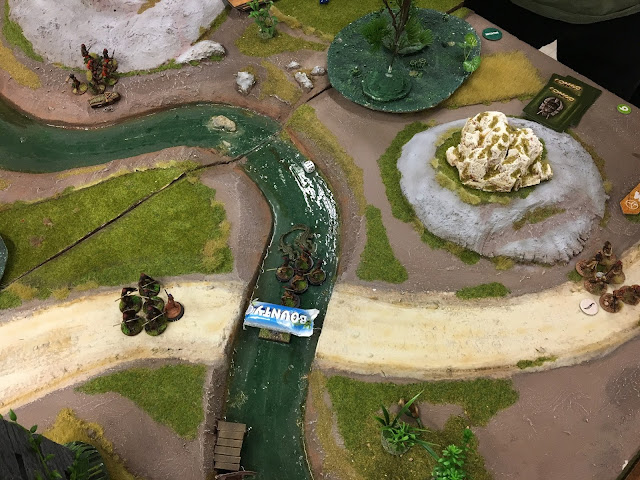 ... and found that his pre-sight had been right: braves were attacked by a swarm of crocos! Luckily the braves really wanted to impress the son of the great chief Mjubunga and duly proceeded in killing the crocos! Croco-skin would soon be made into new boots for the chief and his son! 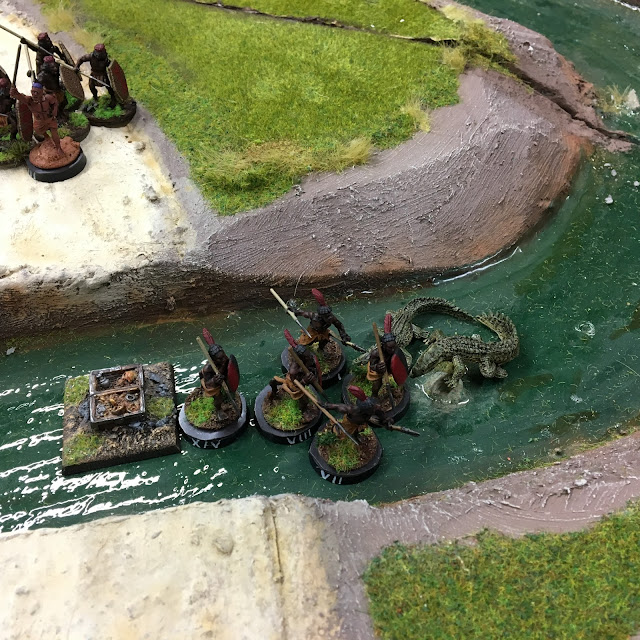 Just after Lumjumba also the white man explorer lead his henchmen to the loot in the middle of river, Lumjumba smiled as he saw another group of crocodiles swallow one of the henchmen... 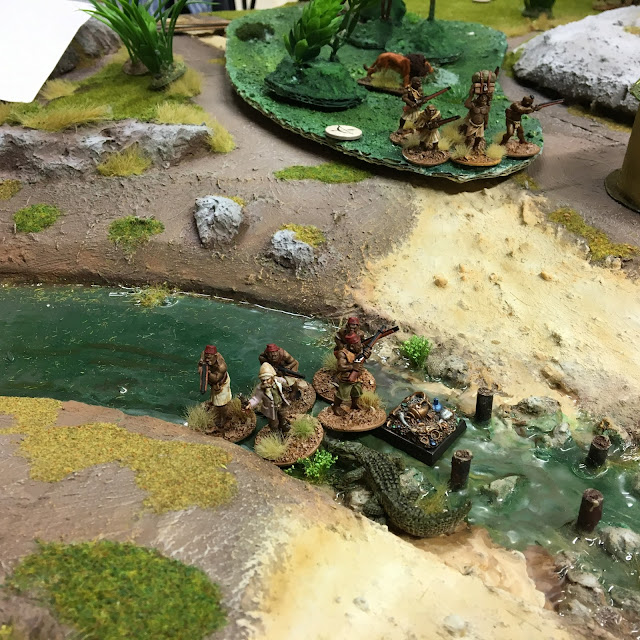 Mikko started the third round with a very cunning combination of an action card and a totem card: he went for all out shooting as the first card and played "initiative" -totem card changing his initiative 4 card to I 8 against my I 7 card (I had chosen that to make sure I get the first activations). Luckily most of my groups were in terrain (river included) and got to roll their saves on D8 (5+ is always a success in Congo, no mattter what dice type is used), so no serious damage was made. 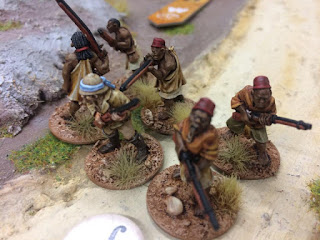 With the brutal smile still on his lips Lumjumba ordered the warriors with spears to target the white officer and his soldiers, whom tried to take cover as spear flew towards them..
This didn't help them as warriors were very skilled with their art of spears (hitting on 5+ on D6) and in a flash 3 soldiers fell to the ground impaled by spears! 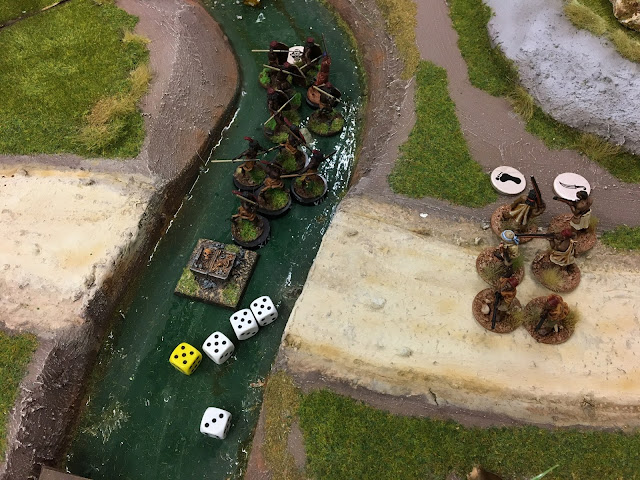 After this slaughter it was easy for Lumjumba to lead his elite warriors and finish of all already terrified soldiers, only the old officer was left alive, he had been covering behind his men and now staggered backwards in terror! 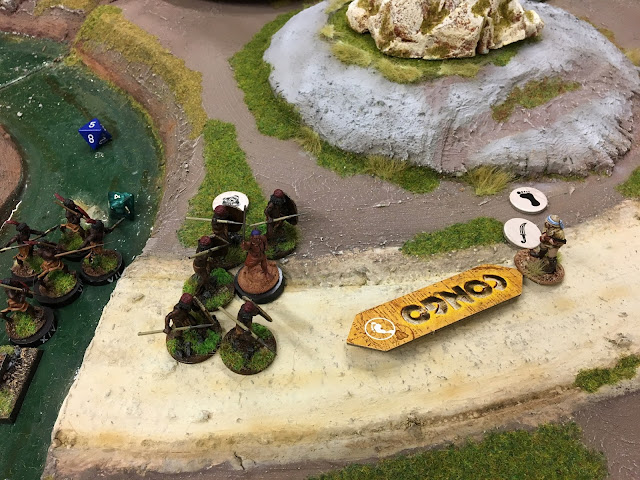 In the left flank Mr. Explorer hastily advanced with one of the loots and more of his henchmen moved in to cover his escape attempt. They were peppered with my archers from the jungle, causing few casualties. 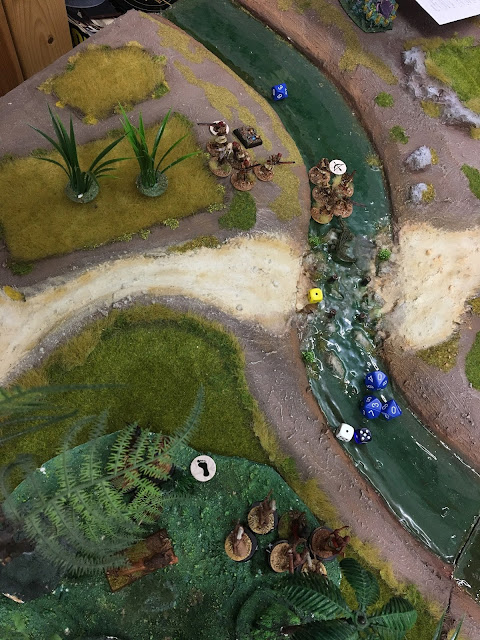 In the middle of field my Bundukis had secured one loot and pushed forward over the central hill.

Bunduki lead commanded his men to fire at the treacherous Asade warriors blocking their way to the
exit point, but as they were yet a bit unfamiliar with their muskets, they had forgotten to ram the shot into the musket - lot of noise and smoke, but no hits! 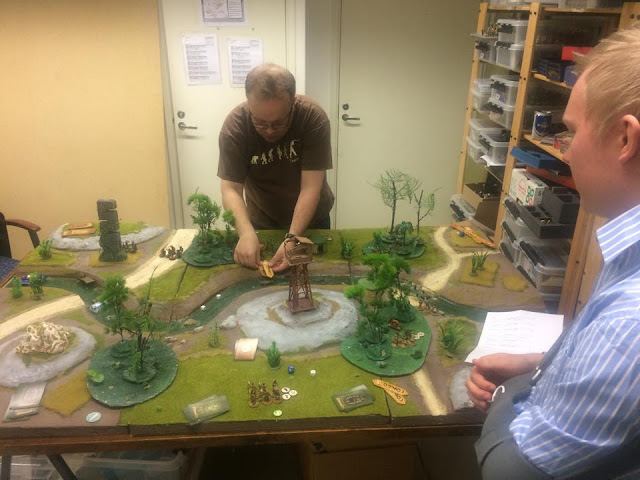 
In the meanwhile Mr. Explorer kept running towards the way out, he didn't even bother (or dare) to look back to see what was happening to the henchmen covering his flight - they we dying! 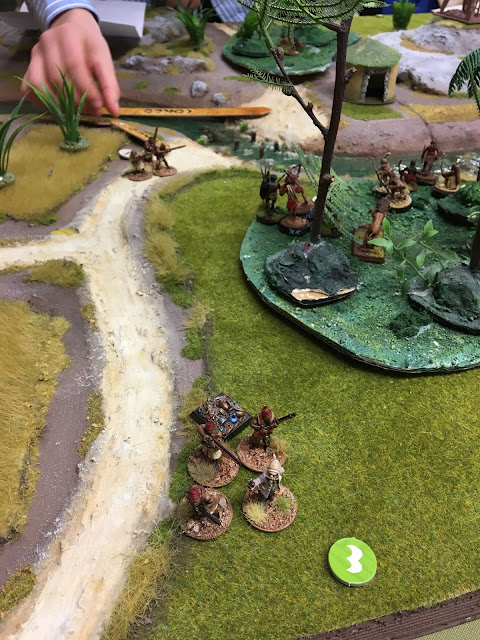 Last henchmen group had been steadily whittled down by my archers and as my warrior group
had gone chasing after the escaping Explorer my archers went all in and took out
the final henchman in a swift melee! 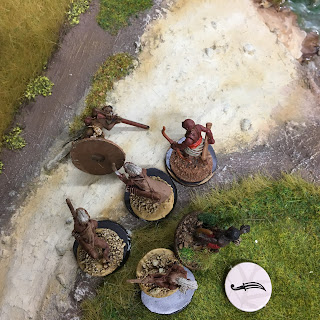 In the center my Bundukis had learned to use their muskets (even if we didn't know the rules, it takes on shooting action to load them) and peppered most of the Azande warriors with musket balls. After another swift melee their way was open to leaving the battlefield with their loot.
Healer had kept them safe throughout the game and not a single warrior from this group had fallen. 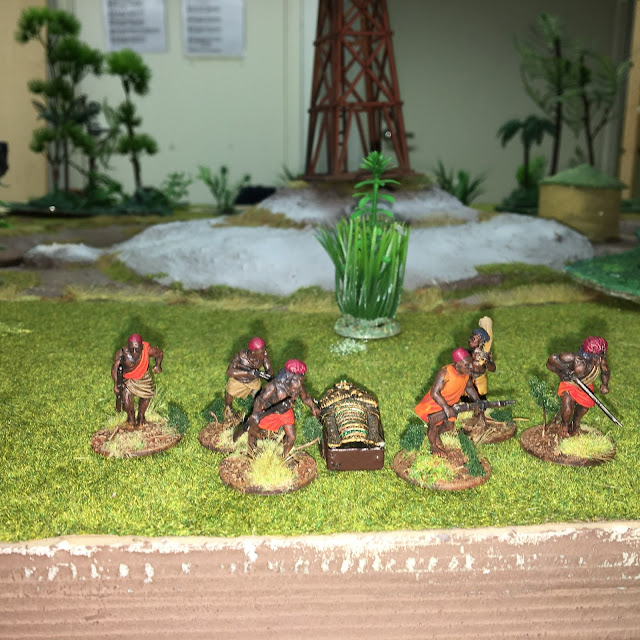 At this point we actually stopped the game. Mikko's Explorer has escaped with one loot, but his Column didn't have any models left on the table, hence my groups with two loots had a clear trek to VICTORY!

As the evening fell and loot had been taken to village, Lumjumba and his somewhat cannibalistic
warriors gathered around the wounded (retired) officer. The man was notorious of his evil deeds against the native African people... now he would pay for these deeds!