Testing a new Battleboard from Saga Age of Crusades: 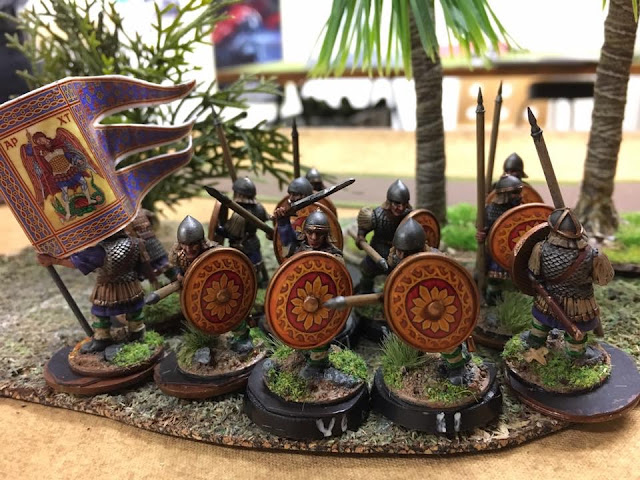 I've been slowly painting some FireForge Games plastic Byzantines (see review here ) as an allied force for my Rus / Medieval Russian army, that I've been playing our Kingdoms in the East -campaign. As the November Saga Game Night at our Nopat & Taktiikka Club was closing in (I was organizing it), I decided to take a sprint in painting my Byzants and challenged Saracens to a fight.

Then I started to study the battle board and it really caught my interest: a challenging board to play, but potentially devastating, when played in the right way - units clearly need to work in co-operation to get the best synergies; many abilities require or are boosted by other friendly units within 4".
As a downside, many abilities are pretty expensive: 3 of them require two Saga dice and only 3 can be activated with the common symbol. As the Warband also only has 1 warrior option: mounted with composite bows, one needs to have levies to bring some bodies and staying power to the field. As we know, levies can't be activated with common die symbol... What's most distinctive in this BB is the Domestikos ability: 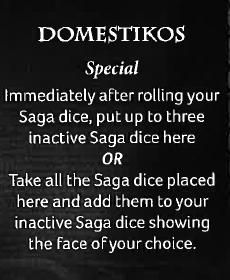 So this would really help in getting the needed symbols for the abilities and for playing a levy-heavy  Warband. Then again, at least in the beginning of the game you would first need to "charge up" your board - this could give the initiative to the enemy. In future rounds you can always use one of the dice in Domestikos to Basileus: 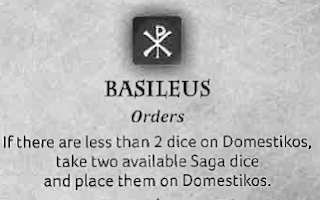 And hence keep the Domestikos wheel turning, on a moderate speed at least.

So let's see how all this works!

I had to build my warband based on miniatures I had already painted / could finalise before the game. A build started to form in my mind... I'd only have one unit of mounted warriors available... 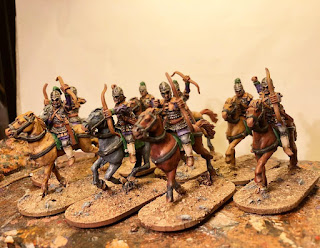 And one shouldn't go overboard with levies due to dice economy... 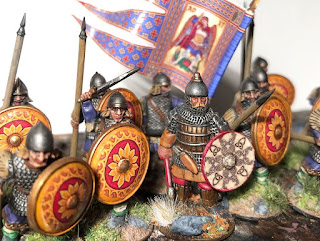 Levies with shields and spears - just as good as warriors I think! 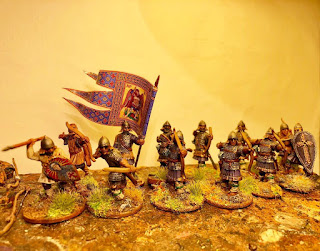 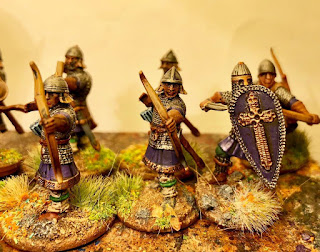 Plastics mainly from FireForge + some kitbashing

So with 3 points remaining I decided to go all HG... I do have both heavy cavalry
and Varangian Guard painted... this time I decided to go for 8 Varangian guards for 3 points.
In the game I split them to 1 unit of 4 with dane axes and 1 unit with hand weapons. 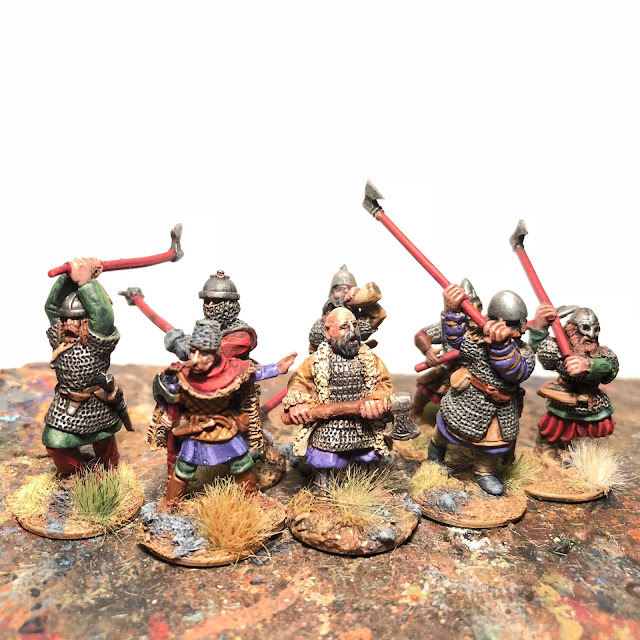 Kalle fielded a Saracen force with 8 mounted HG, 2 units of mounted warriors with composite bows and one on foot and one unit of  levies with bows. 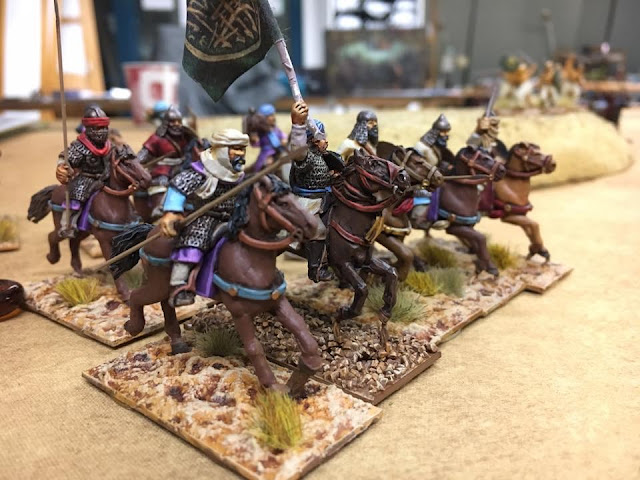 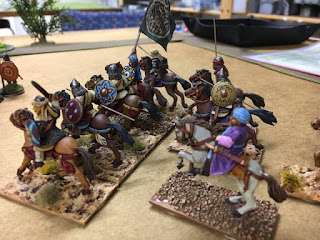 While still waiting for the soon to be available Book of Battles, we played the standard scenario from the Saga rulebook. After the terrain was set, Kallah placed half of his force, then I deployed all of mine and then Kallah finished with the rest. All units had to be deployed at least  6" away from other units, which was annoying, considering my battle board and my battle plan... 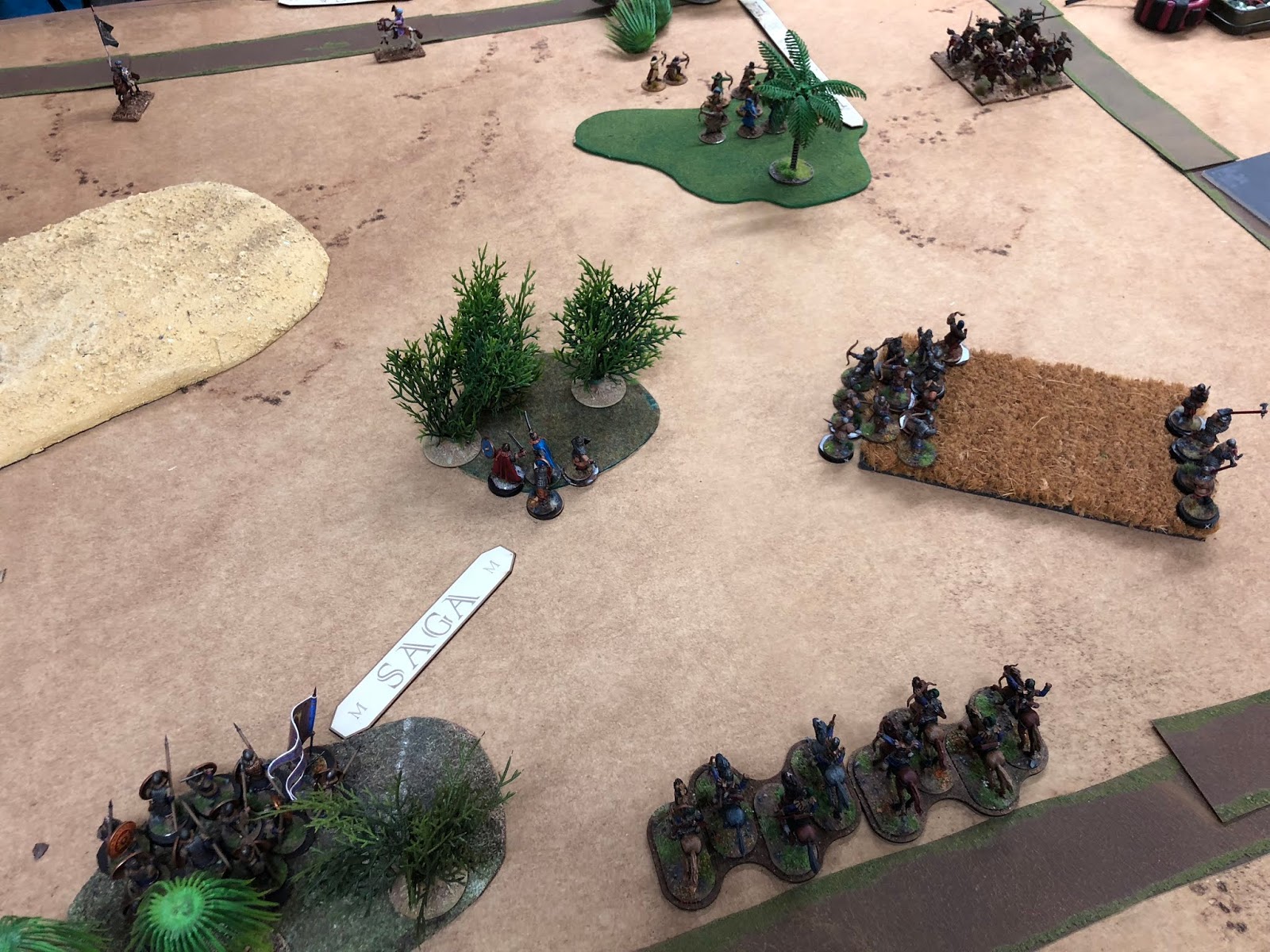 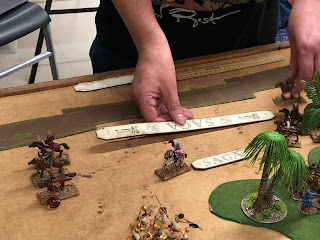 Then he proceeded to advance in the right flank and middle 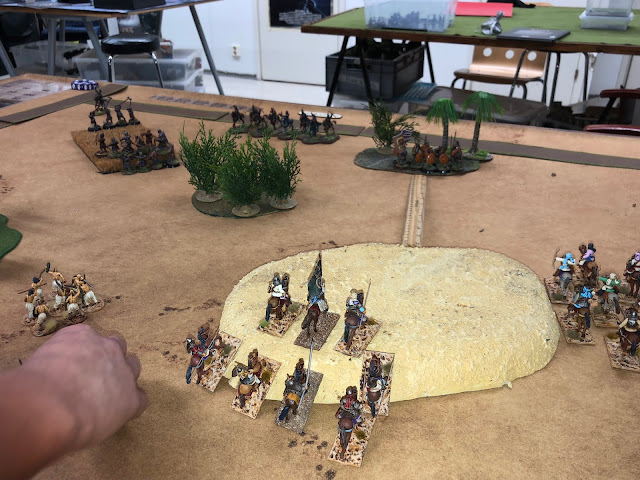 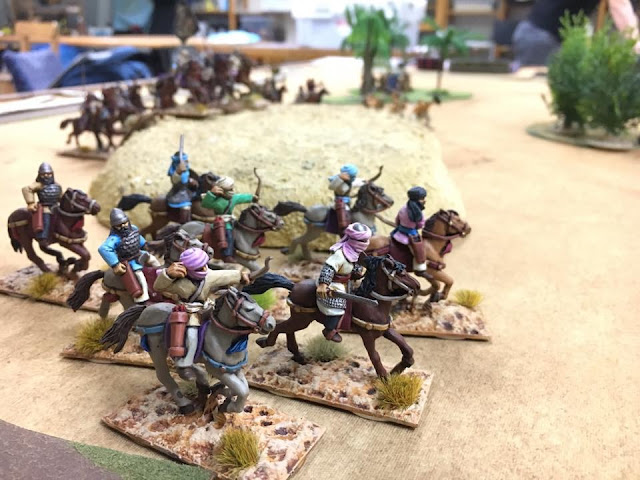 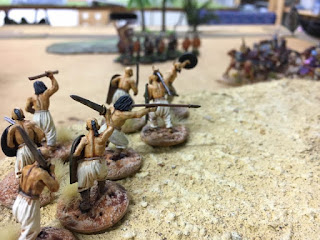 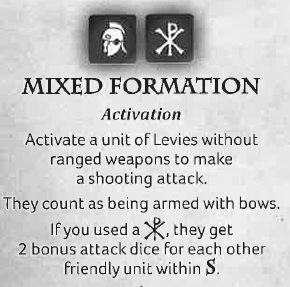 My mounted warriors rode forth to punish the same unit even more and after this barrage 5/8 mounted saracens had fallen - huzzah! 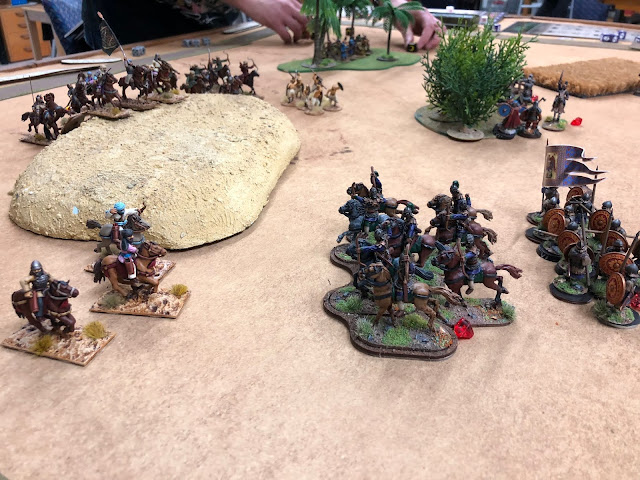 My Warlord Genikos Nikodemus was also moving towards the left flank with Varangian Guard and archers following. 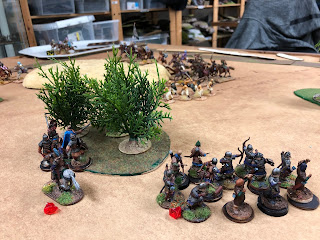 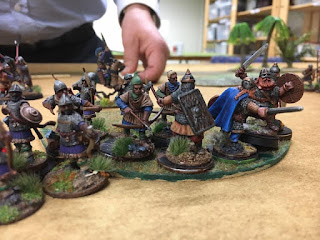 Round 2. Assault of the Saracen elite

I guess my cavalry was too soft a target to resist and Sheik Kallah hurled his HG headlong into them! 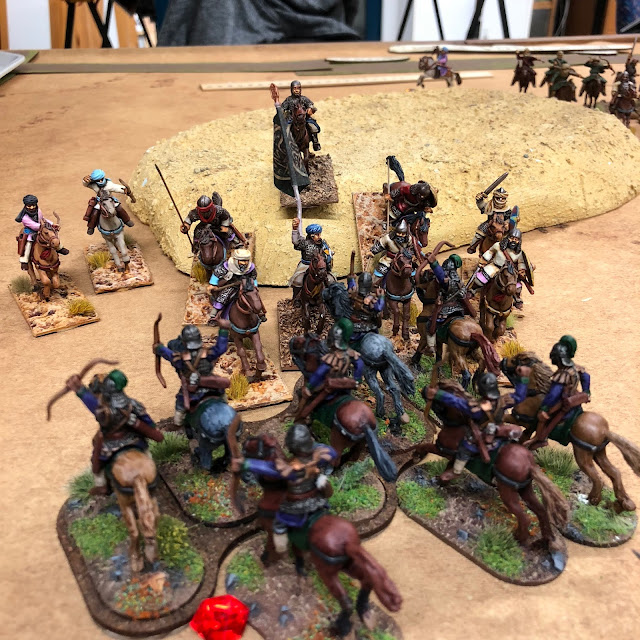 Saracen elite punched through my warriors with ease, losing only one of their number... emboldened by this they continued their charge and crashed against my shieldwall. I closed ranks and increased my armour by spending the enemy's fatigue. Kalle rolled a bucketful of dice, but my my improved armour and saves left my levy unit unscathed! In return I managed to drop few of the enemy - in revenge of my slain warriors! 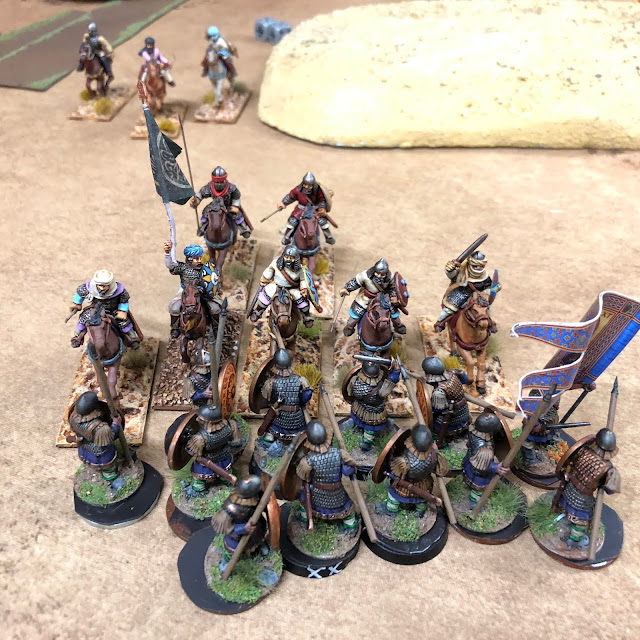 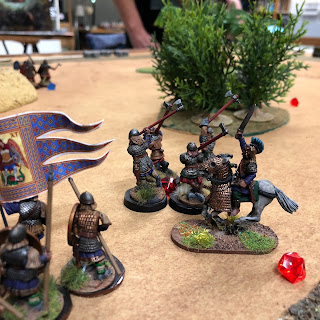 So more missiles rained down on the elite and their numbers kept dwindling, even if some excellent saves were made. 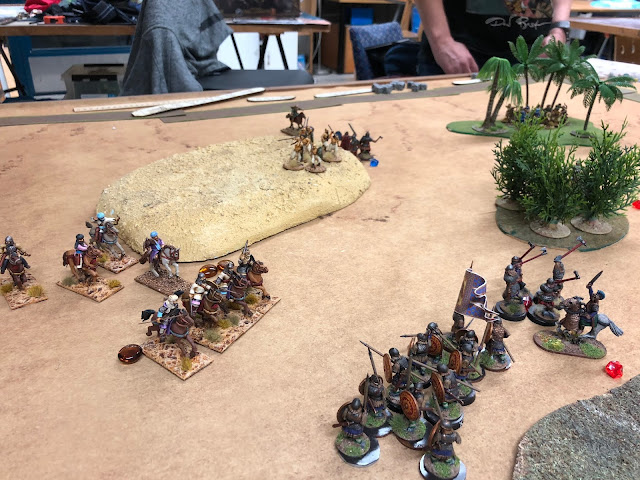 In the meanwhile I had sent my Varangian Guard to attack the other mounted warrior unit, whom had already been softened up by some arrows... 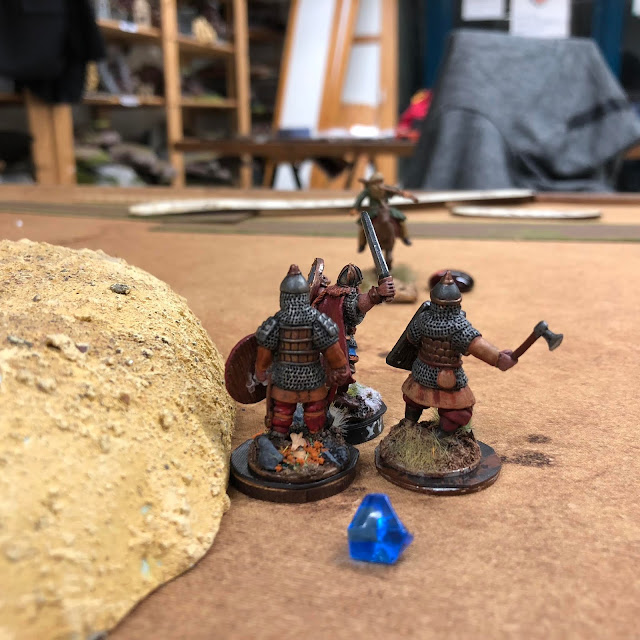 Enemy riders were driven of with just one warrior remaining. My elites had lost one of their number... Saracen warriors on foot counter attacked my elite and in a row of charges both my Varangians as well as enemy warriors were hacked to pieces.

With very few Saracens left in the battlefield, it was time to deliver the final blow. First my Warlord, Genikos Nikodemus charged Kallah, but didn't quite manage to kill him, but left him exhausted. Then the honour of striking notorious Kallah down with a mighty hew of his dane axe! 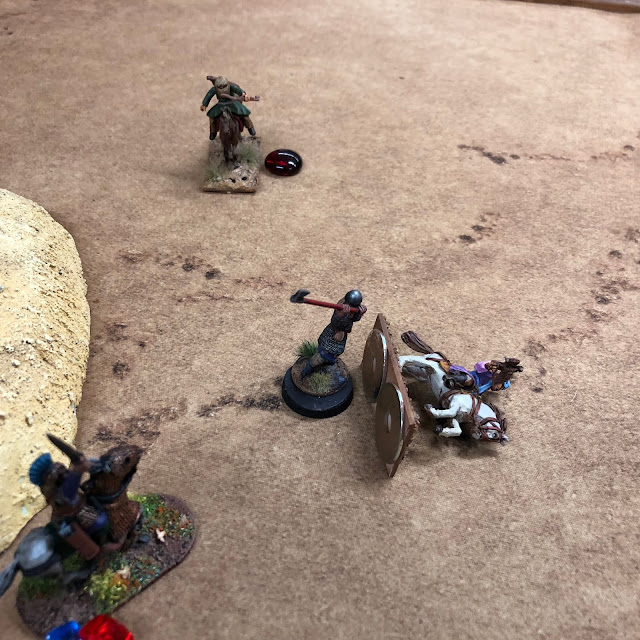