First go with Mother of Dragons 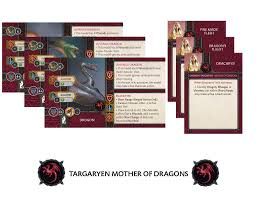 I guess everybody in ASOIAF TMG community have waited and feared for the arrival of the DRAGONS! And now they are here! If you've been reading my blog, you might remember, that I've been dancing with the dragons before too... but this was the first time I was able to actually play with them!

My brother in law has recently started with ASOIAF (I might have influenced this a bit) and he volunteered to try his luck against DRACARYS!

I faced a starter set army boosted with a unit of Stark Bowmen. Commanded by Robb and
Catelyn and Sansa as NCUs.

The key idea to my deployment was to keep Daenarys out of harms way and to play refused flank
in general. Dragons are naturally able to swiftly move to where they are needed, but then again, some
of Daenarys' cards only work if the dragon is close to her unit. Starks deployed more centrally, but
leaning towards the same flank to where my forces were, as they saw my deployment folding out. 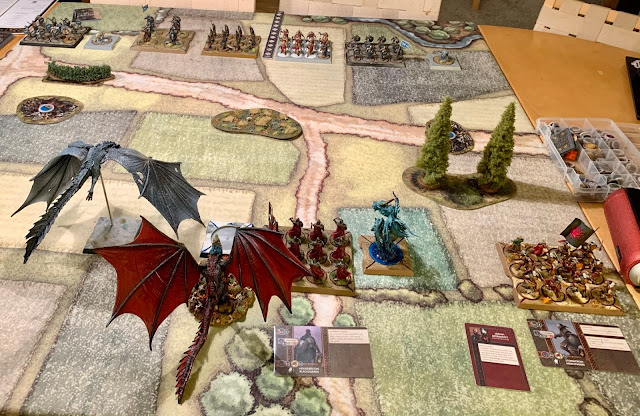 Dragons looming in the distance, but these brave (or stupid?) northmen are ready to face them! I got to start the game and after the usual Tactics pre-phase I moved Rhaegal to extreme right, covering
the corpse pile with an objective token. After this move I re-read the Dracarys card and realized, that a dragon needs to be within short from Dany's unit to use it. Well, it was a good position anyway. 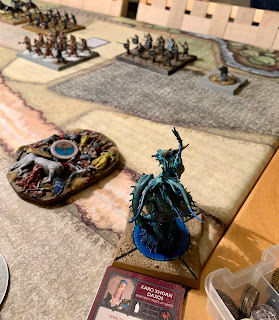 I learned from my mistake and placed Drogon so, that it was both 6" from Dany and 8" from Stark Sworn Swords, whom had marched too close, and then... 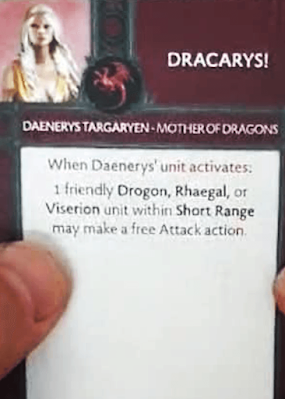 ...after  D3+3 wounds and a failed panic test there were only 3 men left standing in the midst
of fire and smoke! 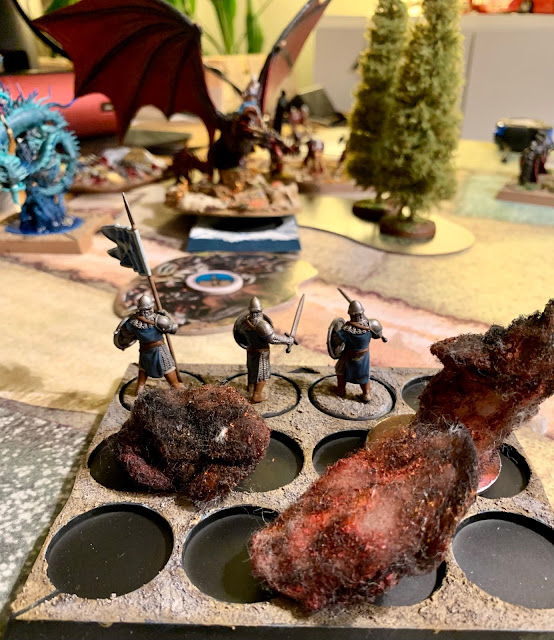 As dramatic as it was, (foolishly) brave Starks were far from beaten and they started the 2nd turn
was started with a charge declaration from the feared  Umber Berserkers... unfortunately they started from a corpse pile and had to roll two dice, needing at least a 3 to make it. With snake eyes they totally failed and tumbled slowly forward from the slippery pile of corpses! 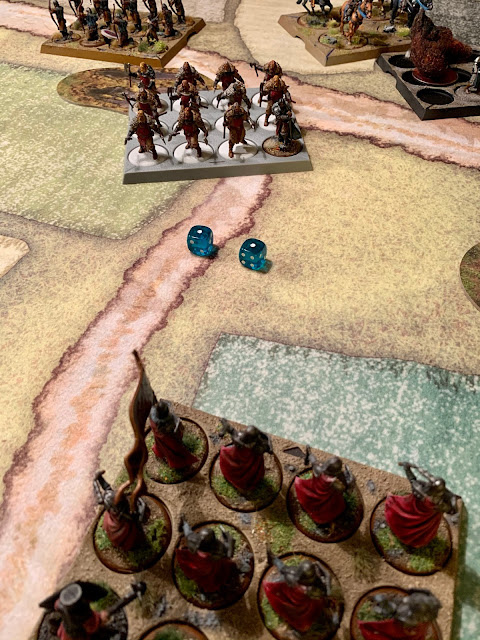 Rhaegal then swooped in and torched four Berserkers, making them really angry I guess... 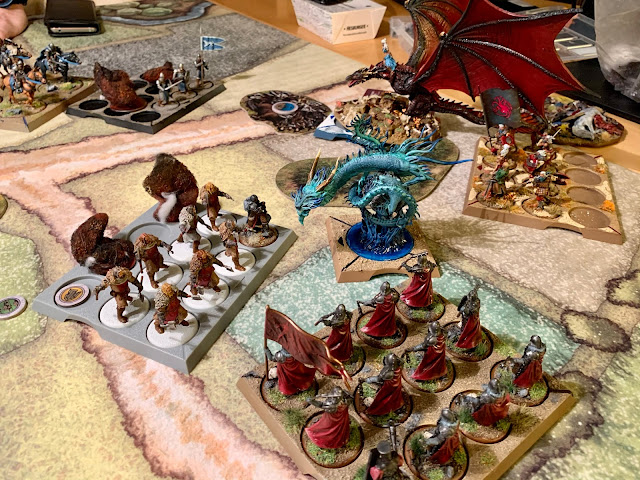 In a meanwhile, Drogon had charged to the remaining few Sworn Swords, eaten them and then with an "Overrub" TC charged forward to Stark Outriders, whom lost 8 wounds to this onslaught - our scenario really played to my advantage, as attacks from dragons are Vicious and most often enemy units attacked were close to a corpse pile, so they were making panic tests with -3! 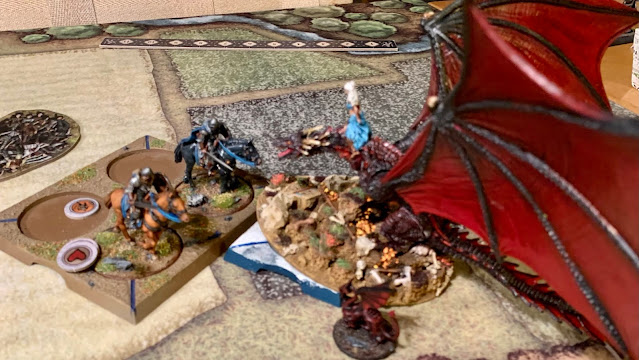 View in the end of Round 2. The problem for Starks is the fact they are feeding their units sort of piece meal to my dragons (and other units supporting them). 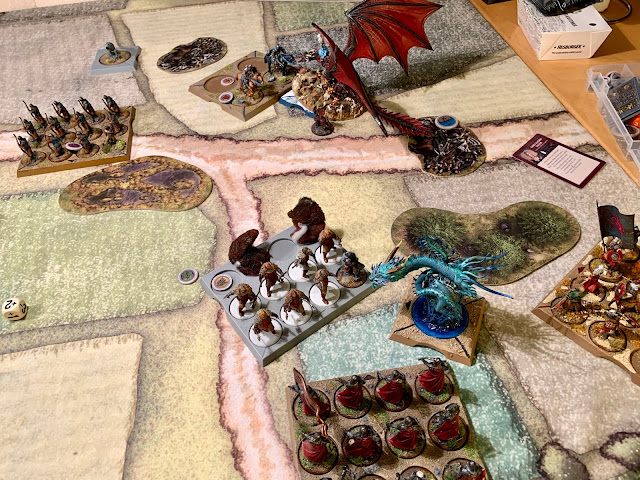 Berserkers finally got their charge in, but I used the "Fire made flesh" TC and  Rhaegal  only got a 1 wound from 3 unsaved hits. 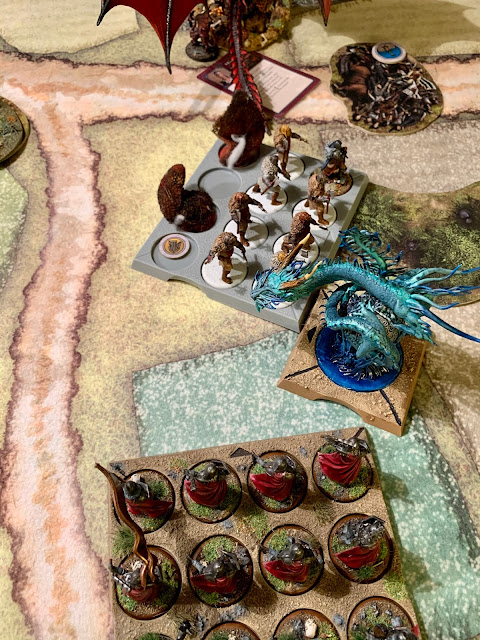 Irritated by this wound Rhaegal only left Robb Stark alive... 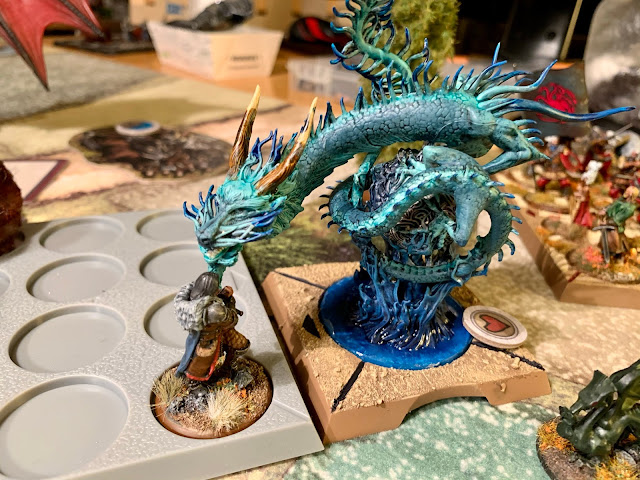 So that the Blackguards could charge in and finish him off! This then gave them a movement boost towards Stark Bowmen and objectives... 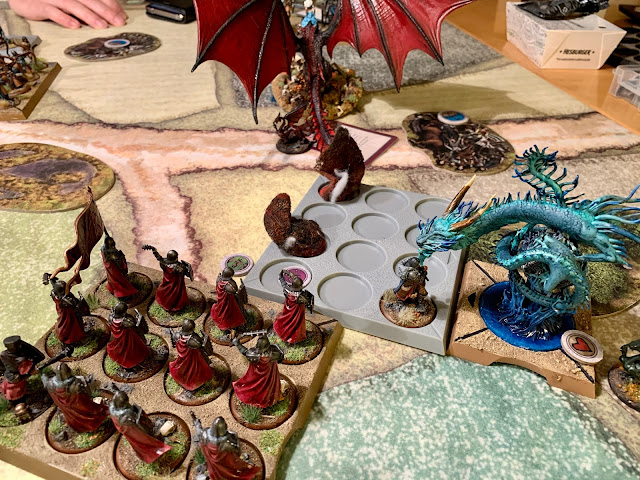 Outriders were motivated by Caitlin Stark to stay  in the battle and attack Drogon, that was protected by Xaro Xhoan Daxos and was hardly even scratched by this attack (I think my opponent also rolled poorly) 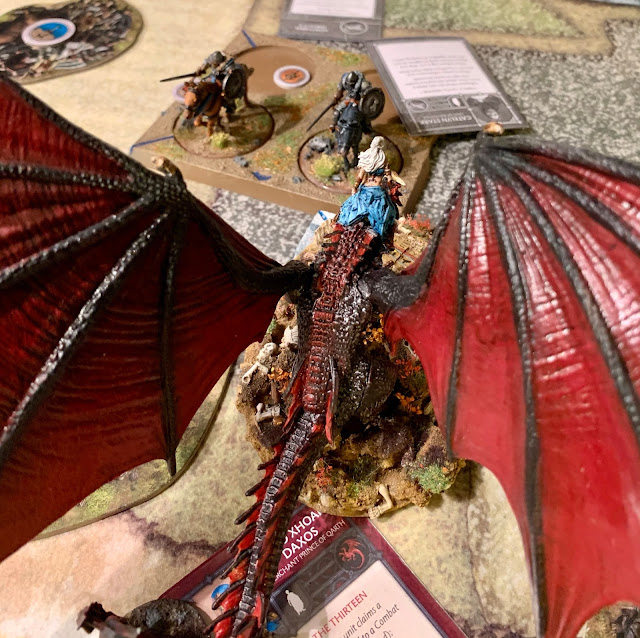 As round 2. was drawing near to it's end, Greywind jumped on to an objective. Starks were now holding more objectives then I was, but at least Daenarys with Stormcrows scored 2 points and I had already destroyed 2 Stark units... 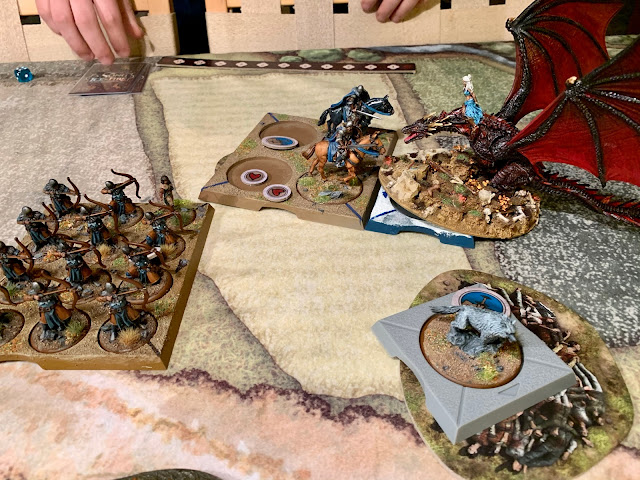 Brutal slaughter continued! I started and  took "Swords" from the Tactics Board and  Stark Outriders were destroyed.  With another "Dracarys" card soon after Stark Bowmen were also vaporized... they had made an error and shot at Drogon, which obviously pissed it off! 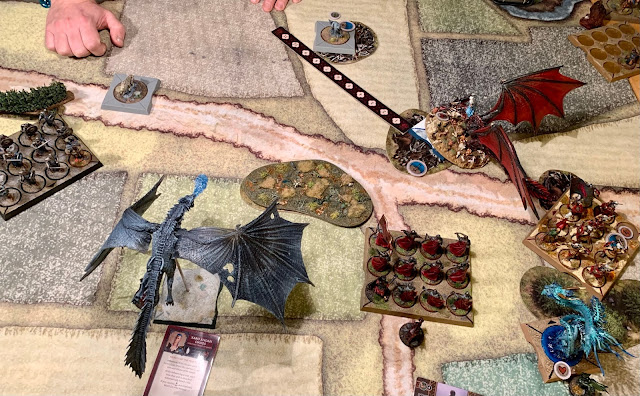 And the poor Graywind was torched from the objective it had run to protect... Drogon was on a rampage! Last Stark combat unit decided to leave their objective to try and kill at least one dragon! (at some point I had healed 3 wounds from Drogon and 2 from SCs with Tycho) I would have won on round three, but in my lust for fire and blood, I had made an obvious mistake: I had activated Dany's unit, but done nothing and Crown-zone was still free for my opponent to use. I was totally not surprised, that those cowardly Stormcrows dropped the Objective, losing me 2 VP! 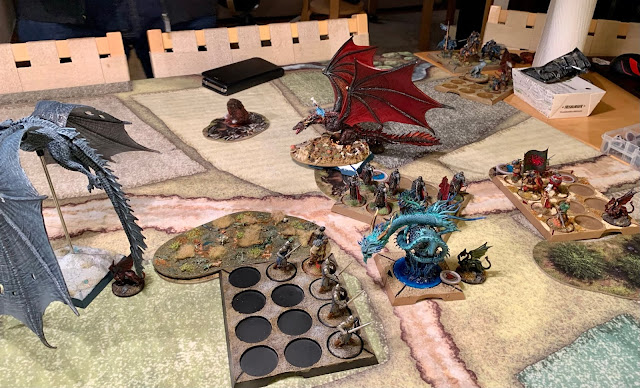 With typical Stark speed the last SwSw unit flew past Viserion and was ready to charge Rhaegal (maybe a "North remembers" card was involved too, and yes there are many brave northern boys killed here, that are worth remembering)

Starks (and my opponent) are clearly a stubborn and brave house, they simply refused to understand, that the battle was already lost! Bran and hodor lead a final desperate charge at Rhaegal, but once again not much damage was caused (possibly another "Fire made Flesh" card here) 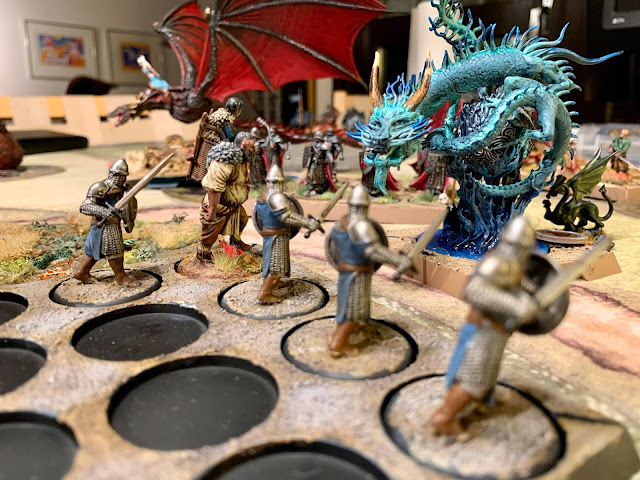 The last Stark man standing - Hodor, (whom is carrying Bran, whom hence is not actually standing) was gulped down by Rhaegal. Somewhere in the left Viserion had torched Summer already. 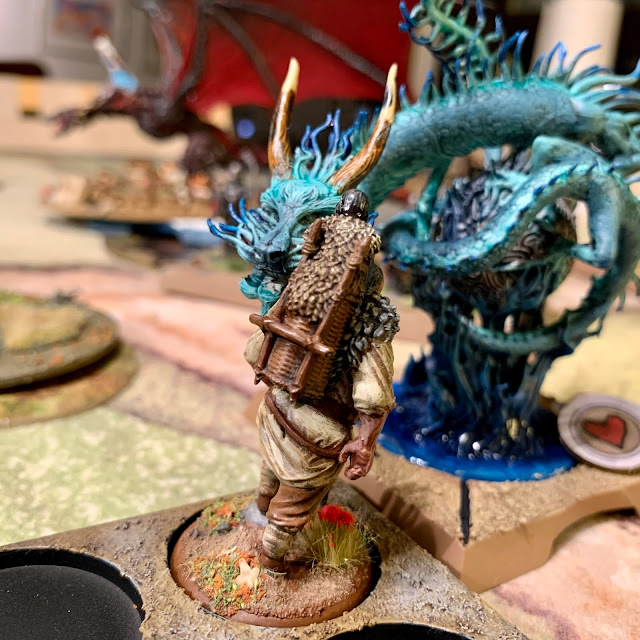 The field of battle was now completely in Targaryen hands! As the battle ended, all my units were still standing and my dragons had only 3 wounds amongst them (I had healed Drogon)! Daenarys was still with Stormcrows - Jorah's bodyguard services were not needed this time (can you also hear Whitney Houston singing... "And I will always..." 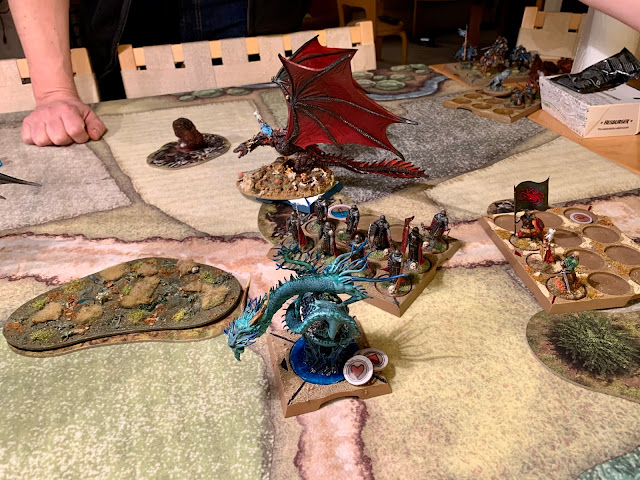 Maybe this result does not tell everything yet, as I’m quite a bit more experienced with #asoiaftmg then my opponent, but these beasts with #daenarystargaryen and her cards are quite terrifying! In 4 rounds there were no enemy left standing and all my units were still on the table! 14-3 victory to #housetargaryen !!! 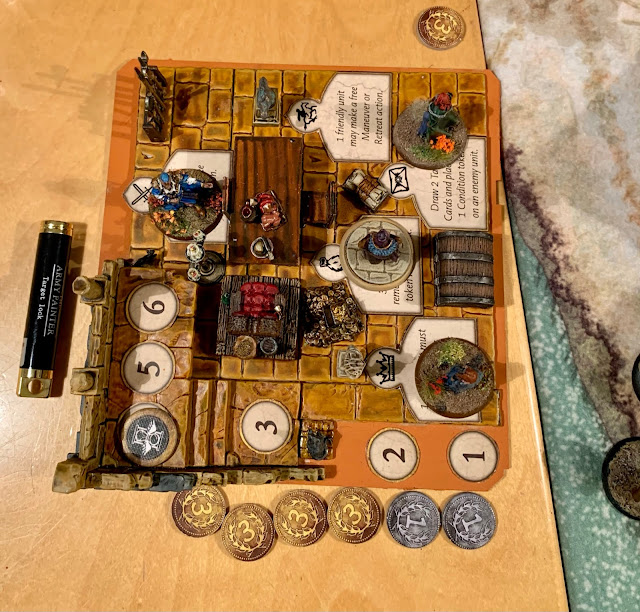