Fate of Eirik Bloodaxe, end of his Saga aka Battle of Clontarf

Today we fought the historical battle of Clontarf to conclude our club's Britannia Campaign. Campaign was played with Saga ruleset, but this battle was fought with Hail Caesar rules. 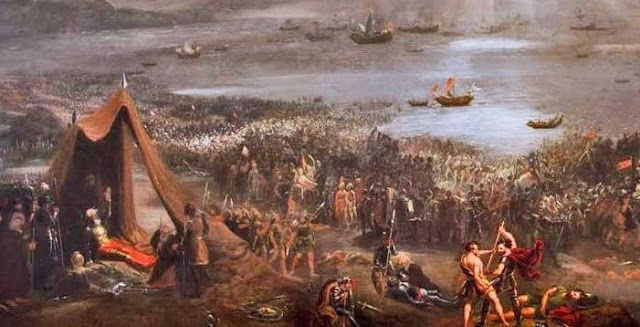 Read on to learn whether history repeated itself or not...

The Battle of Clontarf (Irish: Cath Chluain Tarbh) was a battle that took place on 23 April 1014 at Clontarf, nearDublin, on the east coast of Ireland. It pitted the forces of Brian Boru, high king of Ireland, against a Norse-Irishalliance comprising the forces of Sigtrygg Silkbeard, king of Dublin, Máel Mórda mac Murchada, king of Leinster, and a Viking contingent led by Sigurd of Orkney and Brodir of Mann. It lasted from sunrise to sunset, and ended in a rout of the Viking and Leinster forces. It is estimated that between 7,000 and 10,000 men were killed. Although Brian's forces were victorious, Brian himself was killed, as were his son Murchad and his grandsonToirdelbach. Leinster king Máel Mórda and Viking leaders Sigurd and Brodir were also slain. After the battle, the Vikings of Dublin were reduced to a secondary power. Brian's family was temporarily eclipsed, and there was no undisputed high king of Ireland until the late 12th century.
The battle was an important event in Irish history and is recorded in both Irish and Norse chronicles. In Ireland, the battle came to be seen as an event that freed the Irish from foreign domination, and Brian was hailed as a national hero. This view was especially popular during English and British rule in Ireland. Although the battle is today viewed in a more critical light, it still has a hold on popular imagination.[2]
Source: Wikipedia.

ORDER OF BATTLE AND OBJECTIVES 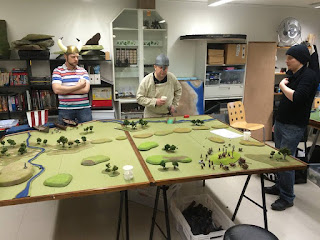 All Light infantry are small units.

Note! All Irish “Fianna” have morale 4+.

So the Irish had a slight (20%) upperhand on point values, but they had to attack to get to their objectivess.

Set up of forces: 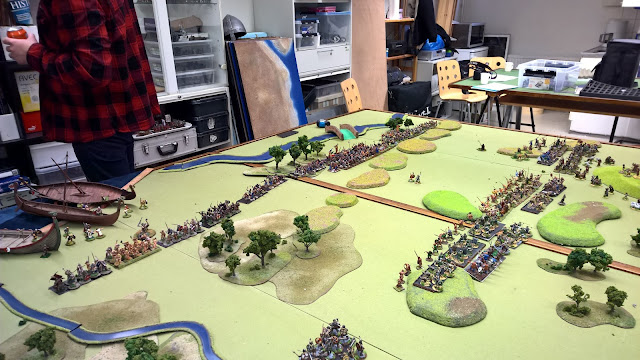 The Irish had the first go. Three commanders made surprisingly different "choises". Viking mercenaries on the Irish extreme left flank dashed three moves forward, showing the Irish the attitude. Modhla was still slighty drunk from last nights feasting and simply roared forward! Samuli rolled 3 moves and dashed forward to within 6 inches from Brodir's viking division, this brought a somewhat malicious smile to the faces of the Viking commanders. Murchad was more cautious and moved to a central position in the field - not yet giving out his plan (bridge or ships)... Finally Tadgh Mór shouted his very unclear commands, but nothing happened. Then he started waiving his hands (Aleksis rerolled the command dice) in a frantic manner and his entire division moved backwards (BLUNDER with the reroll). At this point Viking commanders were dancing dances of victory and laughing their guts out! 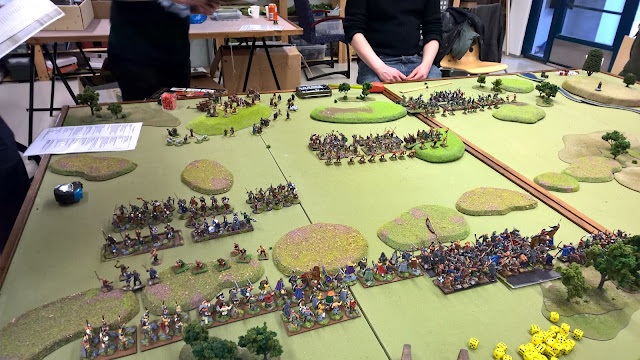 Viking Mercenaries advancing aggressively towards the Viking ships. Maybe they should have checked over their shoulders what their paymasters were doing - retreating!!! 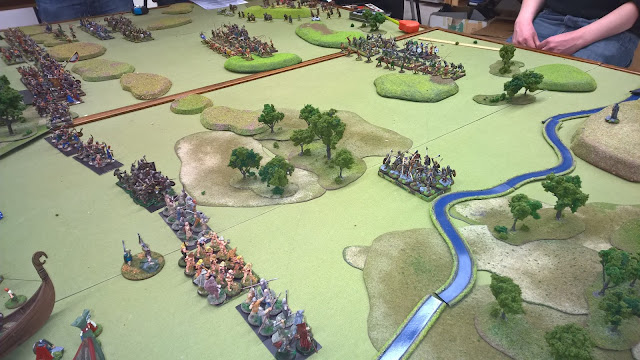 Beautiful, if not so planned echelon formation by the Irish 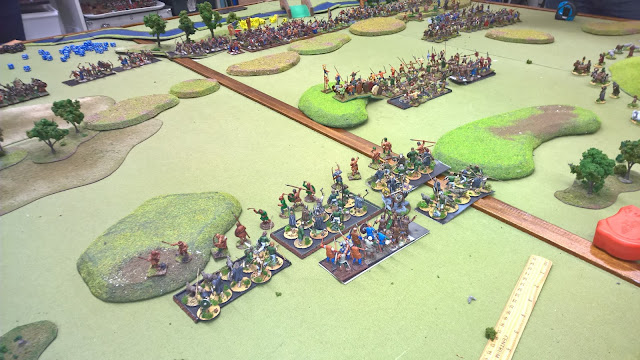 Brian Boru and his retinue of sheep (including the priests) wondering
what the hell his commanders are doing... 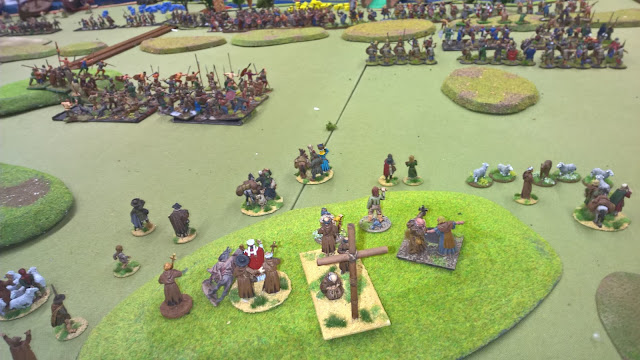 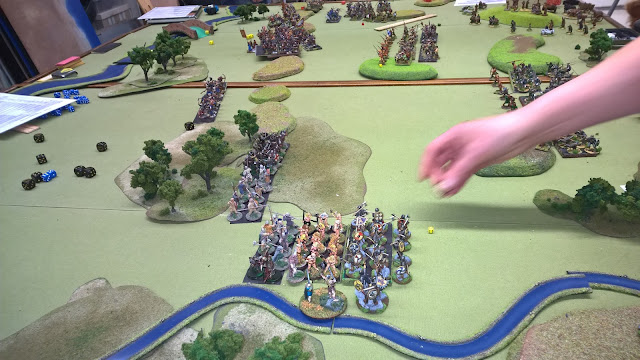 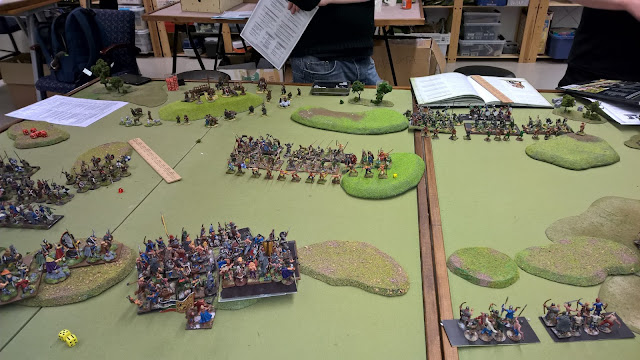 Viking shooting caused turmoil in Irish's and their viking allies' ranks with few units retreating and messing their battle line. 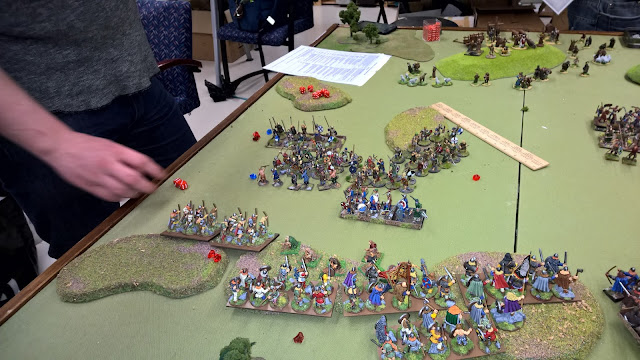 Brodir's division also engaged Irish and their Viking allies, that thrown themselves at their front. This started a long and bloody melee, that lasted throughout the game... 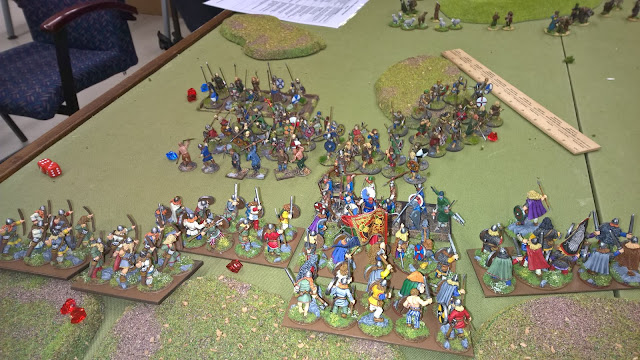 Turn 2 started with another blunder by the Irish, this time it was Murchad moving his entire division backwards. "Yultiden" the viking Jarls were thinking. 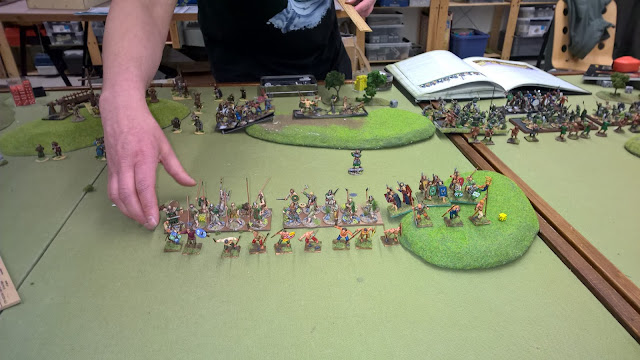 Two Irish warlords pondering: "Why are our divisions here?" 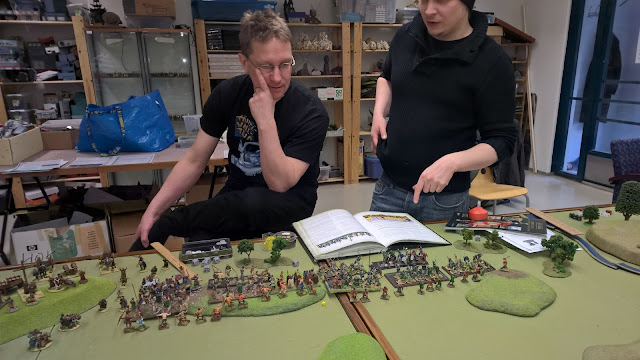 Sigurd division, led by the berserkers drove the Viking mercenaries back and eventually destroyed them 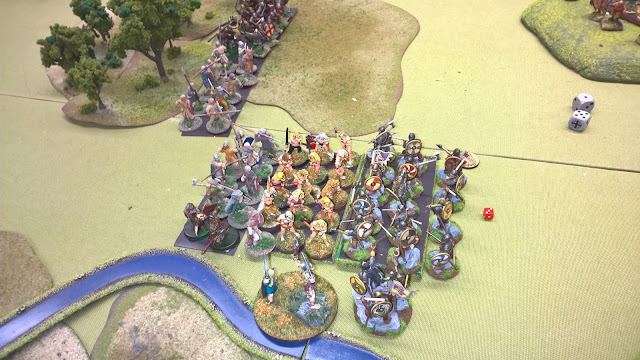 And then sweeped forward (2 moves) to outflank Tadgh Mór's division. 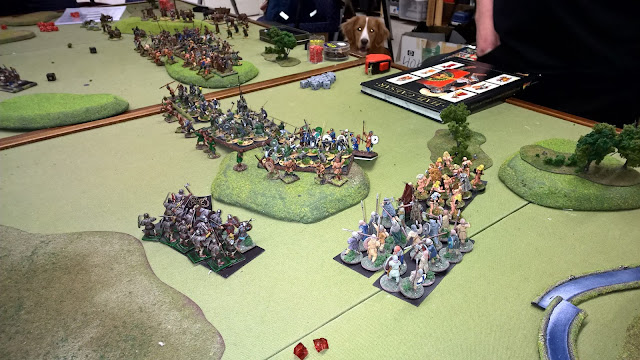 In the center Sigtrygg saw the opportunity to unite his strength to Brodir's in slaughtering a single enemy division. He sent light infantry forward to harass and screen Murchad's Irish division, while he then urged his hirdmen and bondi to engage the enemy, but alas it was not meant to be! Even with a reroll they could only get a one move. Should that charge have succeeded, it would most likely have been a game winning move... 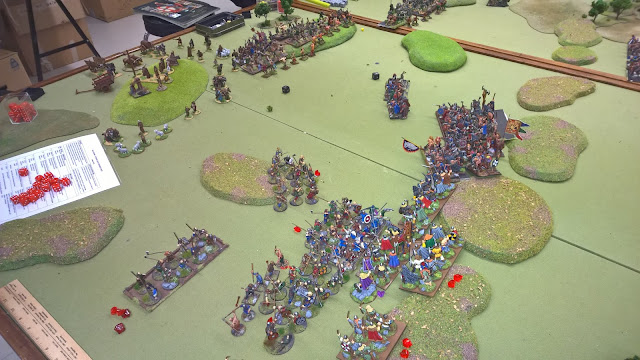 Round 3 Charge of the Dal Cais

Murchad had now grasped the control of his warriors and with rigorous resolve they now charged forward to the viking archers standing in their way. A reroll gave them 3 moves and they crashed in, wiping out the small units with their ferocious clash (value 9) and proceeded to engage Sigtrygg's warriors into their front and flank. Viking's had had a great opening for the battle, then we have played a gamble and now it blew on our faces... 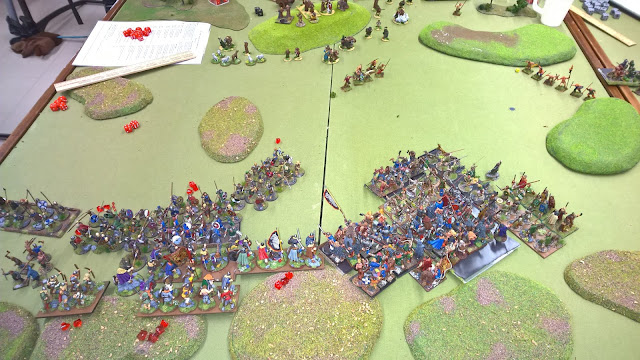 In the viking right flank the Irish very pondering what to do in a slight panic... 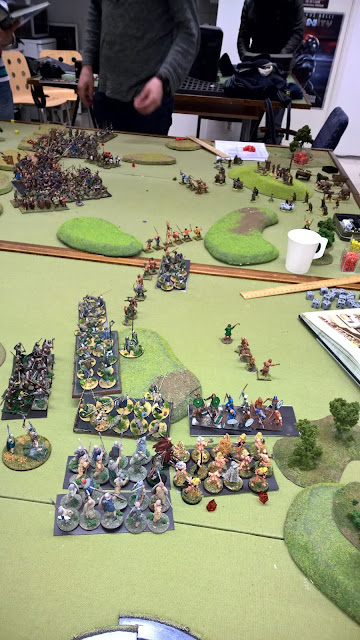 But eventually they also managed to turn this very awkward situation into an even fight. 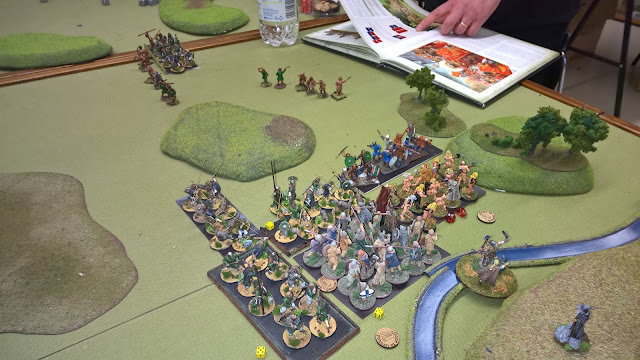 In the center viking were taking heavy losses, even if closed ranks kept them alive for a while. Rules of engagement (read Proximity-rule) were discussed in a quite heated manner as befits berserkers and wild Irish fighters. Several units broke on both sides, but unfortunately most of them were vikings, whom were fighting to their fronts and flanks...

Here also fell Eirik the Bloodaxe, with a bloody axe of an Irishman in his groin... so ended his glorius saga (he had been the Warlord with highest glory-ranking in our campaign). Sniff. 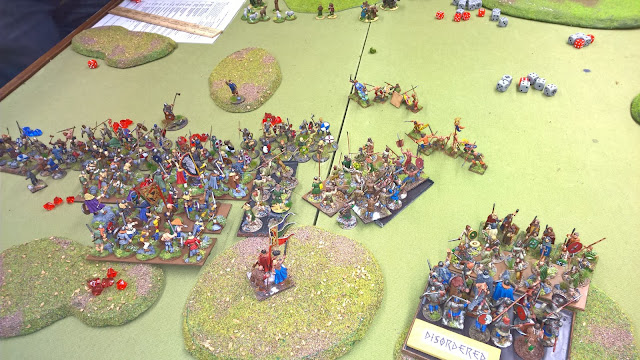 View from the ships (an Irish objective). Viking runners were bringing messages to
prepare them for immediate departure... 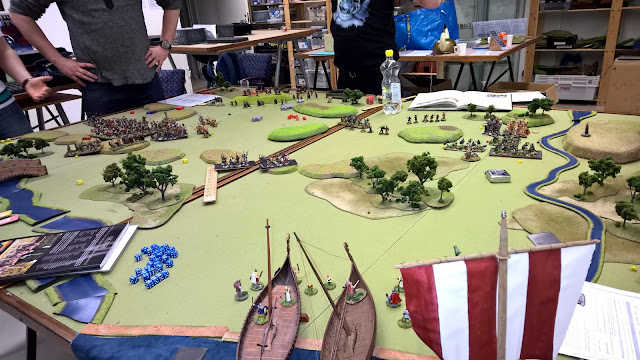 Hand of Odin pointing to the doomed vikings and inviting them to Valhalla.
At this point my (Sigtrygg's) division was no more. It didn't break, they were all killed (I managed to lose those bad odd fights only with reasonable margins - 2 and 3 - but my break test rolls were really bad). 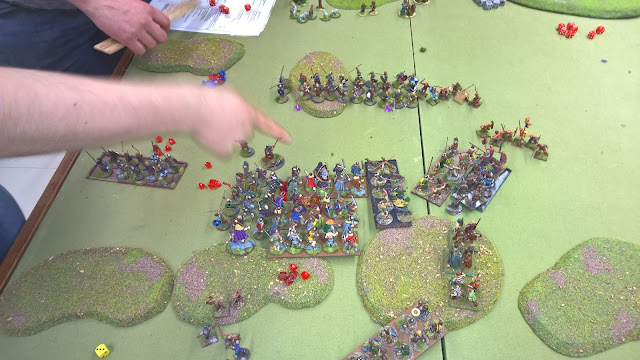 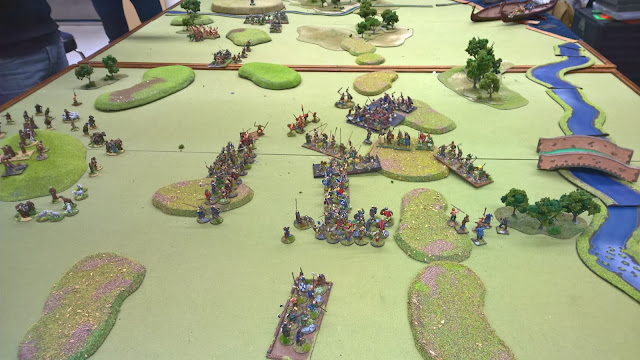 In the Viking right flank Sigurd's (who has also fallen) berserkers had cleared their way through the Irish and were making their way toward Brian Boru's encampment... 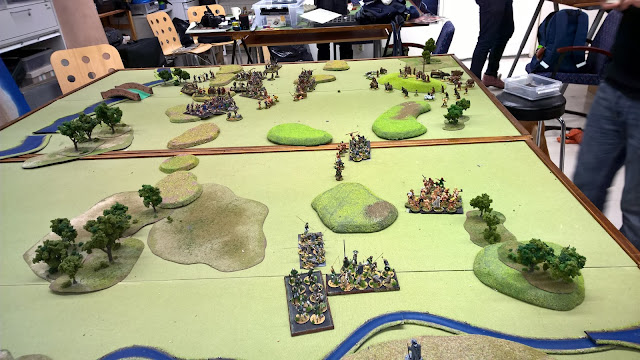 In the centre Sigurd's light infantry bondi shouted "Valhalla" and charged the rear of an Irish Fianna unit... only to be badly stomped and broke... 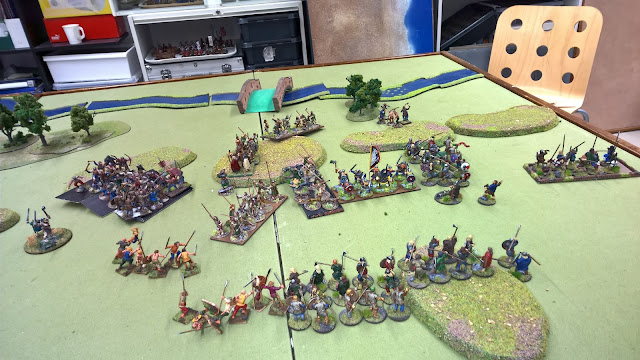 At this point we called it a day and summed up what had become to pass...

Irish had played a cunning trick on the vikings: two divisions retreated making us vikings too exited to exploit this opportunity AND throw our plan of "holding back and shooting before engaging" out of the window. This cost us dearly even if we were quite successfully in the beginning. At least our aggressive advance gave our people enough time to escape with our longships, but the Kingdom of Dublin was no more...

So what happened in Ireland?

Brian's  son Murchad died, but Brian survived. Also this simulation of Clontarf broke the political power of Vikings in Ireland, but as we had performed so well in our Britannia campaign, Viking's cultural heritage remained strong in Ireland.
Lähettänyt Teemu klo 19.34