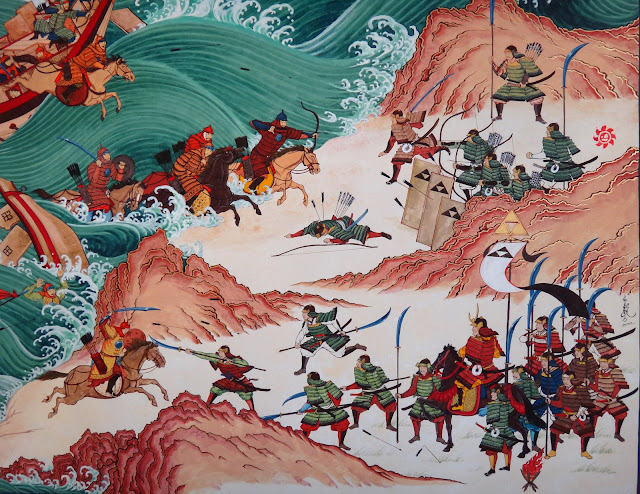 Actual, historical invasions by Mongols didn't go so well. Read more to find out, how our "what if" game went...

We recently got the new KoW Historical books with my friend Kalle and wanted to give it a try. We've been playing Hail Caesar quite a lot, but since it's army list points are pretty useless, we've been looking for some other system to play point match games.

We played the "Kill & loot" -scenario, where we deployed 6 objective markers, that were each worth 10% of the army size (180p.) in addition destroyed enemy units' point values would be counted.

My army was as follows: 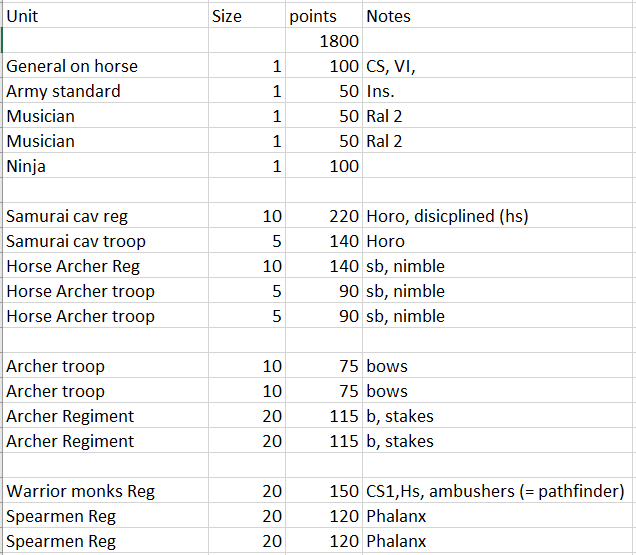 Kalle had an almost all cavalry army, all except just one trebuchet. He had two heavy / medium cav. lancers and ALL were skirmishing. This actually made the Mongol-list a bit broken, because skirmish makes them -1 to hit with ranged attacks (5+ hit typically). I had lot of shooting, but wasn't able to hit them. This fact (which I didn't know beforehand) made the game quite unbalanced.

Kalle chose his table half, but I won the roll of for deciding who goes first. Naturally one should choose to go second in an objective scenario, but I was too eager to get a change to shoot at them first, so I chose to go first.

I deployed my army in two strong division, one on the extreme lect flank and one a bit to the right from the center. Both divisions had archers & spearmen as basis and then some counter strike units and cav support as well heroes to boost morale. 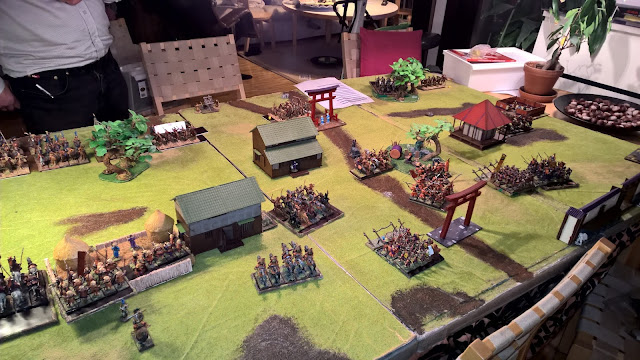 Positions after my first moves; horse archers in range to shoot. Unfortunately my first round shooting didn't really do that much damage, few wounds anyway. 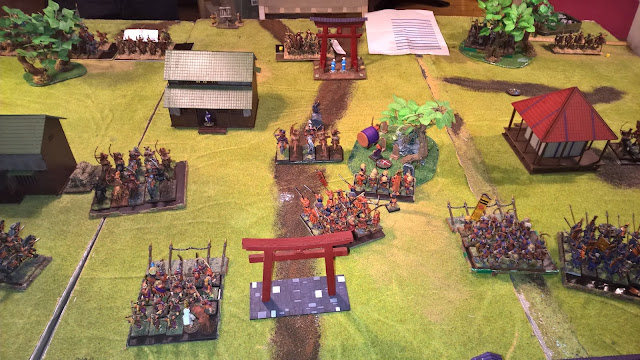 Left flank positions facing the brunt of the Mongol force 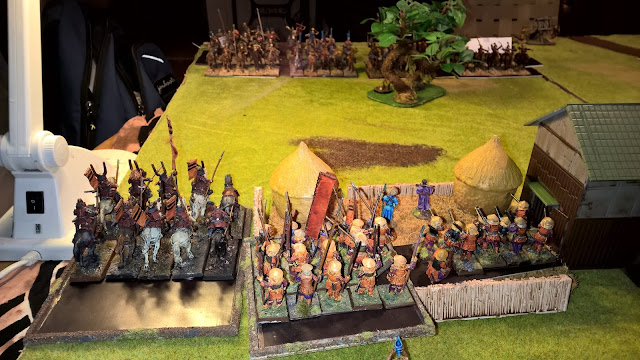 Deployment / First round moves from Mongol-perspective 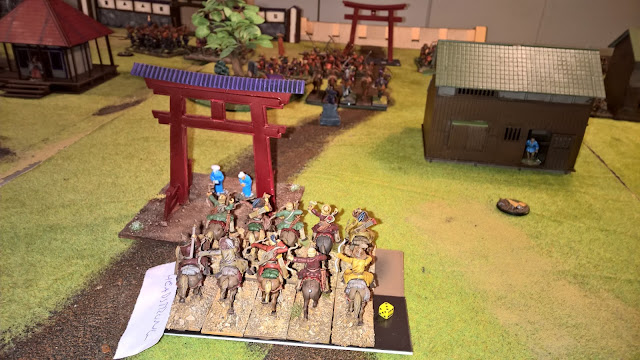 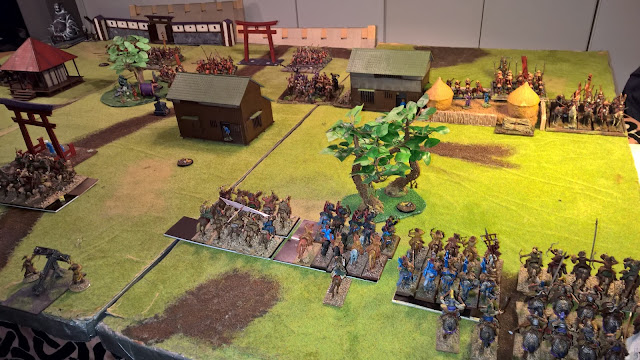 Deadly arrowpower from Mongols...
Kalle's first round of shooting caused an incredible amount of wounds and
two of my horse archers were no more - OUCH!!! 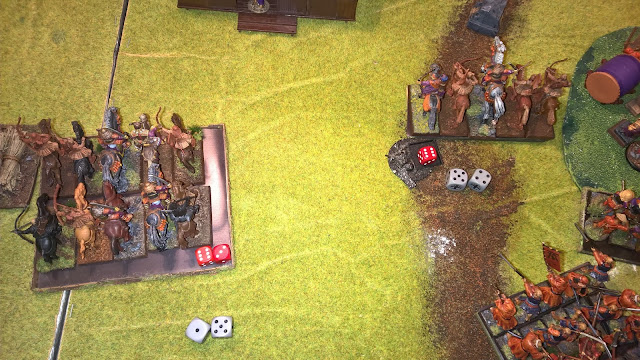 Mongol attack started on the right flank, where fast Mongol lancers (move 9) charged my last
horse archer unit (who's shooting range is 18") and decimated them in no time.

Death of a Ninja
My ninja had charged an already wounded Mongol Horse hoping to break them in one go.
Well, this time the dice didn't allow for this. On the counter charge Kalle threw 2 units against the lone Ninja... 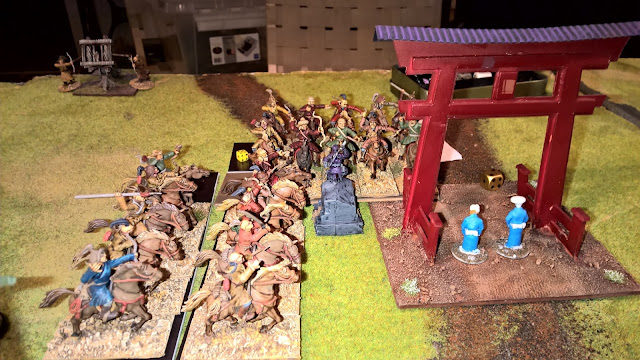 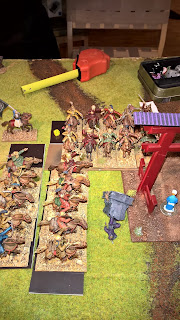 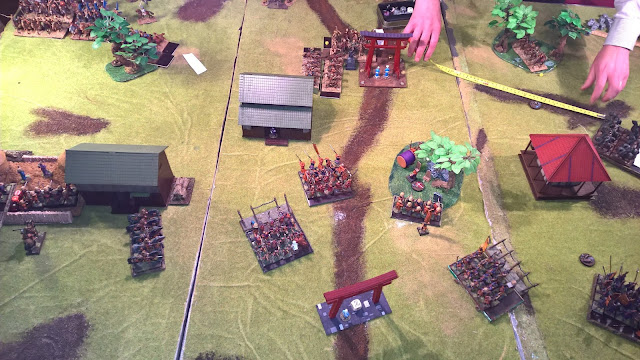 In the left flank I actually took steps back with my heavy hitting Samurai Cavalry.
Positions were such, that if I had pushed forward, Kalle would have been the first to charge
with his other lancers unit, so we were in a stale mate, that was not good for me, as the Mongol superiority in ranged attacks could only lead to one end... 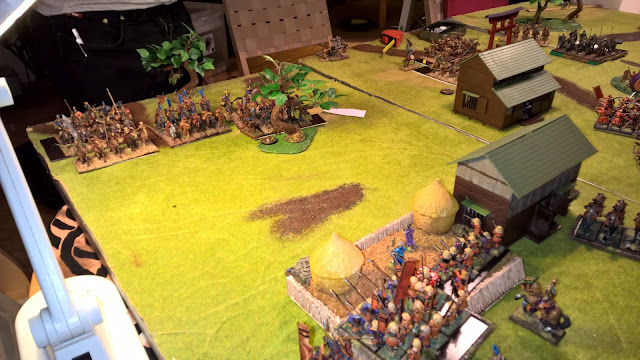 I moved the smaller Samurai Cav into the centre and pushed my infantry forward to get a some sort of battle line and to close in with the enemy, I needed to get into melee... 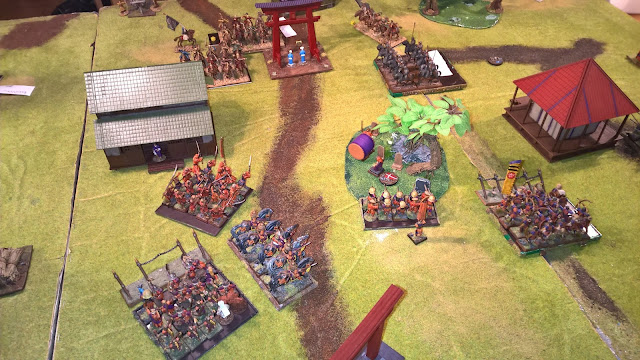 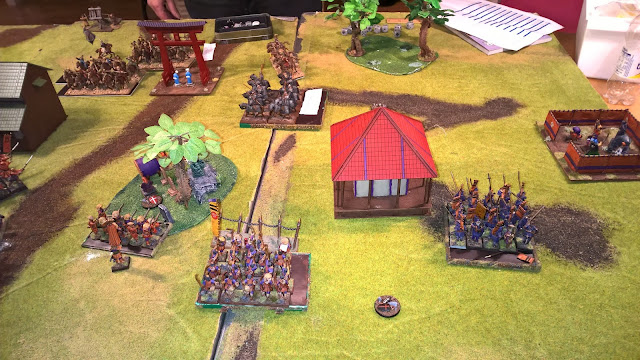 On Mongol turn the lancers once again rolled very well and took out my Samurai Cav. In the meanwhile my stubborn warrior monks were peppered with arrows. This battle was clearly not going my way... 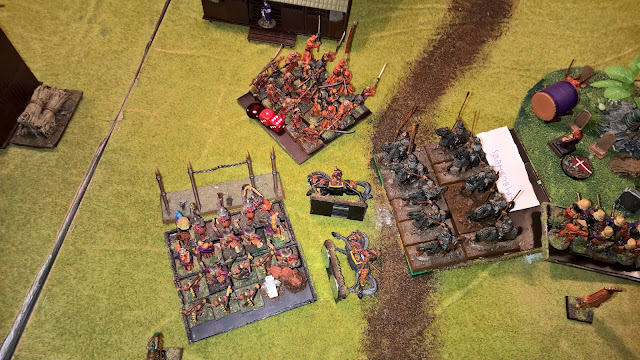 4th round was very fast, on my turn my General and ASB charged the Mongol lancers, but hardly dented them. In Kalle's turn his lancers charged my archer regiment behind staves, whom actually held their ground, thanks to staves. My warrior monks were destroyed with more accurate shooting from Mongols.

We actually called the game ended after four rounds as situation started to look quite
desperate for the Japanese, whom had lost several units against 0 lost from Mongols.

The following images present the fifth round or "truth" that can be created with blog battle reports, typically by the losing side. Here my spearmen have taken a one more objective, while my archers hold two more... 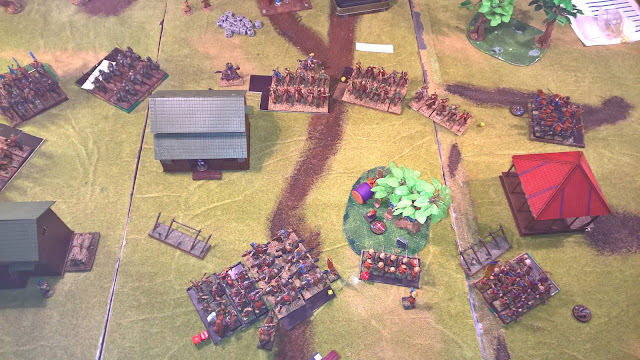 ...and my Samurai cav holds the fourth, giving me total of 4/6 objectives 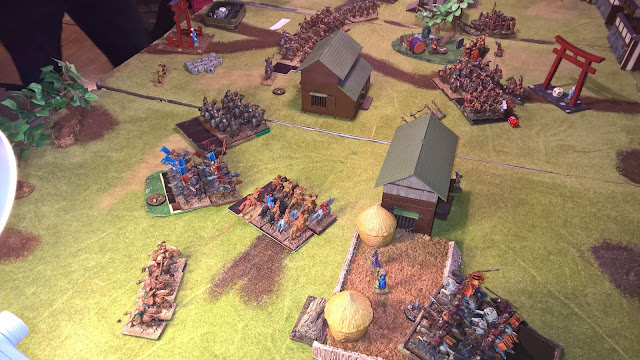 This of course doesn't count in the fact, that Mongols could contest most of the objective, since they would have the last moves. 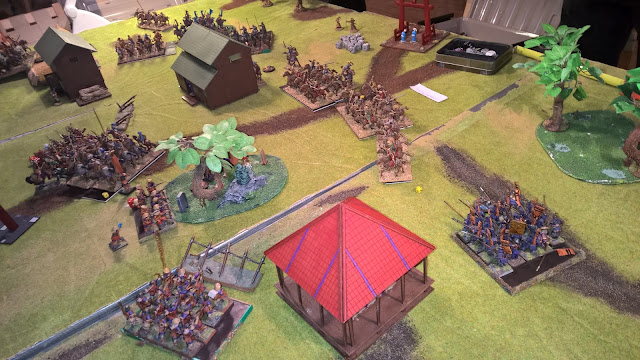