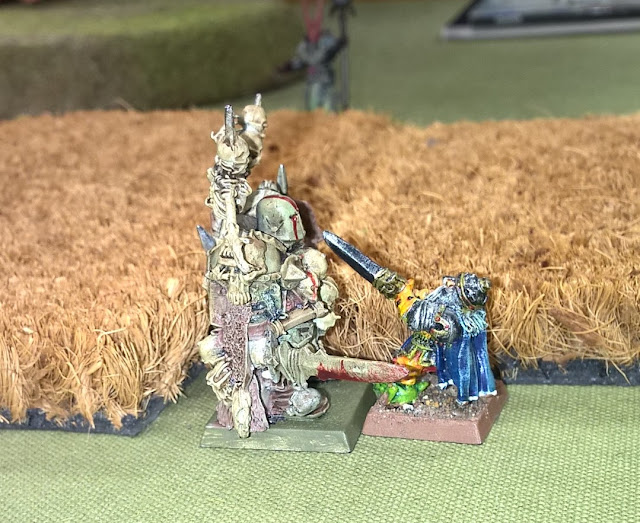 Played my 4th or so game of Kings of War. So far I hadn't been really convinced about the system (maybe because I haven't won a single battle ;-)), this game made the difference... read on to learn why!
Club member Kim had been active in promoting KoW and challenged me to a game. I thought, some fantasy could be refreshing for a change and hence I quickly accepted. We agreed on a 1500p. game and I decided to field my old school dwarves - all but one unit, the miniatures are at least 15 years old and also painted a long time ago.

My list focused on war machines and enough of "phalanx units" to counter probable thunderous charges, of course I would than have the heavy hitters for counter charges. 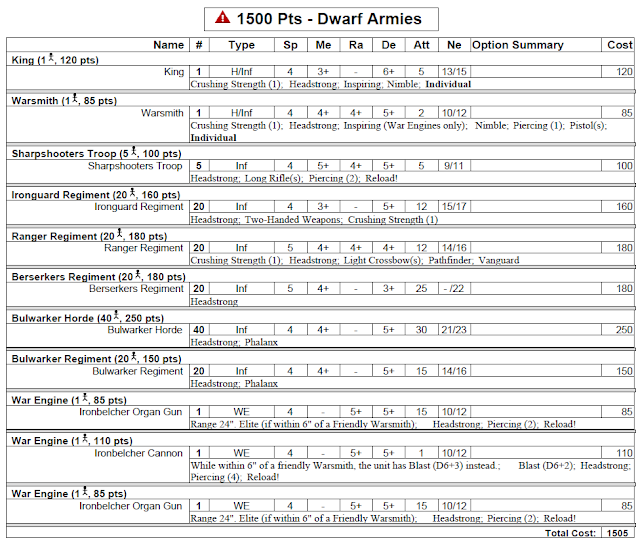 was number 3 from the rule book, where you count the points of units within 12" of the table center at the end of the game. Game duration would be 6 rounds and 7th on 4+ of D6.

I won both the roll for choosing table half and the start of the game. My deployment placed most of artillery on the central hill, more shooters in the front lines on both sides of the hill, Bullwark units with spears behind the shooters. As Kim had less units, I had the opportunity to deploy more strength to my left flank to get a local superiority there. My plan was simple: take out Varangur cavalry as it would be able to threaten my flanks, soften other units and take out the enemy wizard, as it was the only threat to my war machines during the first rounds of the game.

My rangers made their vanguard move and then I started the game.

Battle field positions after my first moves; my left flank starting their advance and my right flank holding and opening fire. 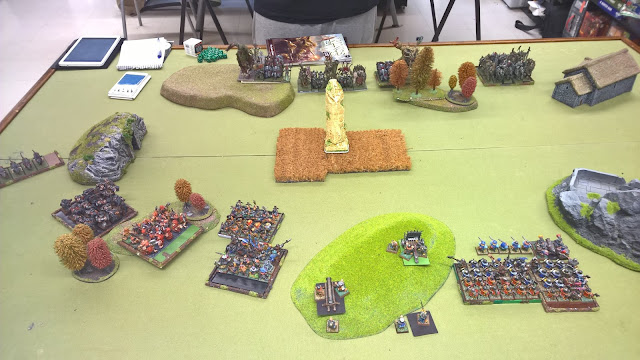 My sharpshooters started by delivering 2 wounds on the Varangur cavalry, my cannon missed and my rangers shot a volley at the enemy wizard and despite several hits, the "chaos armour" of the Magus couldn't be penetrated

Varangur started their turn with rapid moves towards dwarven lines and the center of the battle field. Tundra wolves made very rapid moves around both flanks, threatening my units with flank charges. 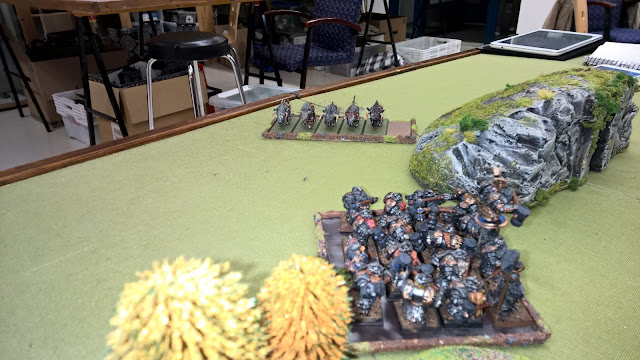 Stout defenders of my right flank, sharpshooters and an organ gun (proxy by flamethrowers) primed their guns on the enemy cavalry and their continuous shooting took it's toll... 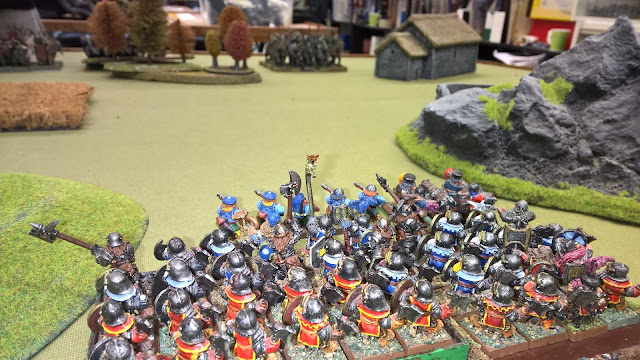 My rangers poured bolts from their light crossbows to the enemy magus, but he just couldn't be hurt! This was probably one of my very few mistakes in the game, I should have used that shooting against the enemy units to soften them up! 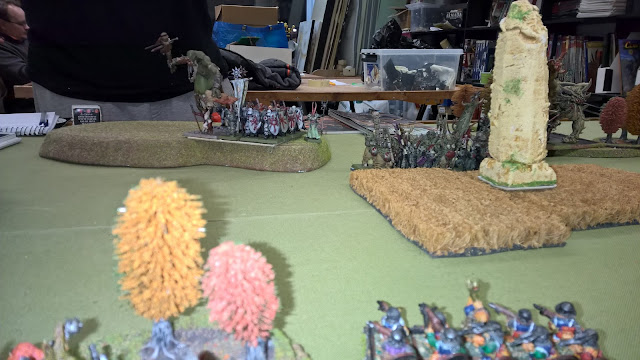 My berserkers had moved to cover the rear of my Ironguards and took the thunderous wolf charge with a grim resolution... 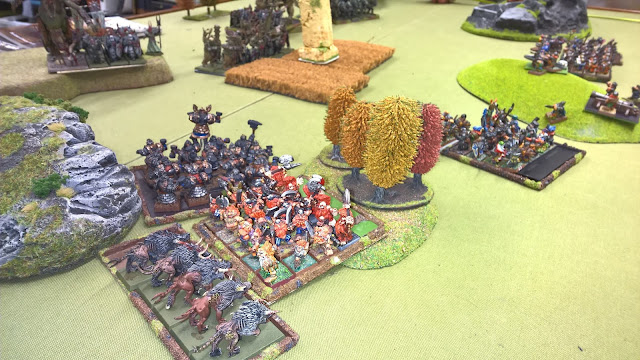 "You filthy beasts, come and get some!!!" 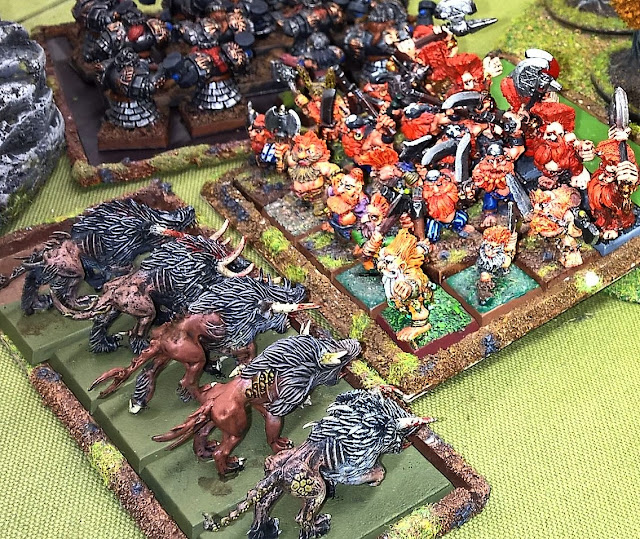 On the third round dwarfen (and mine) spirits were lifted as the cannon finally found it's mark and blasted the Varangur cavalry into oblivion - huzzah! 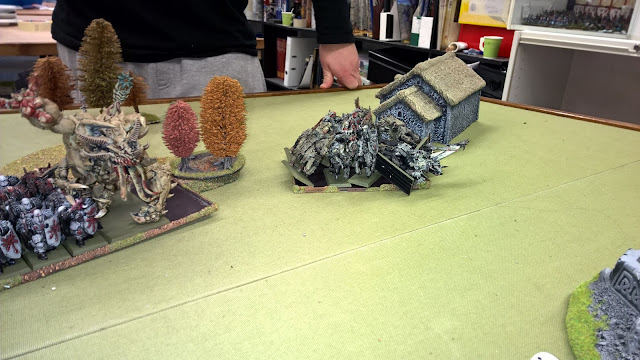 My berserkers swiftly decimated the wolves and then turned to support the Ironguards, whom were expected to smash through the enemy elite infantry with their mighty two handed hammers...

In the middle my heroic rangers put away their crossbows and bravely charged the enemy horde in the target area. They even managed to dent them! On the right flank my Bulwark horde had moved forward pass the shooters to encounter the incoming cavalry, but as the cavalry was now gone, they took a step back to stay out of the fight and allow the cannon to deliver it's payload once more. Organ gun on the hill turned to aim at the wolves approaching my rear from the left... 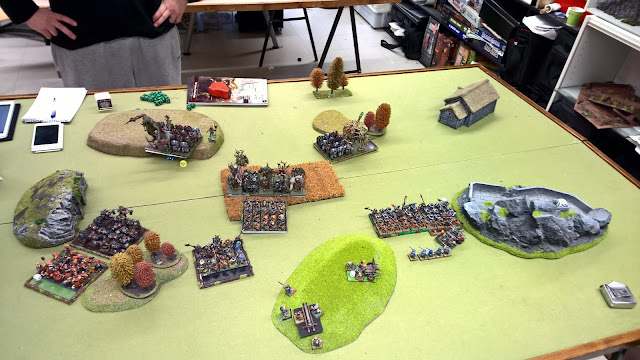 Situation during the Varangur turn - battle is reaching it's climax!

In the left flank my Ironguard shrugg of their wavering mode and hammered the Varangur into wavering, but the Varangur chieftain had cunningly moved to cover their flank from my Bulwark regiment - this move saved Kim's army from certain defeat. In the middle my rangers also steeled their minds and despite their losses charged again against the enemy horde this time aided by the King Jorrim Truesteel himself. Enemy was seriously bitch slapped but stayed in the fight with the help of brutal commands from their Chieftain Urluk Smellyfart

Enemy Magus Finrir Deepshit blasted my organ gun on the hill to bits, leaving their comrades vulnerable to wolf charge... 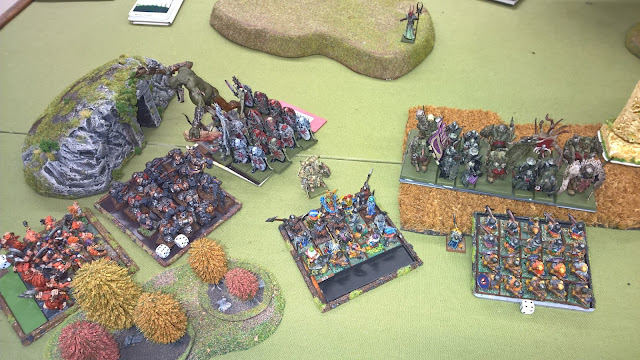 Those damn wolves tore into my Organ gun crew
and chew them apart in seconds... poor lads! 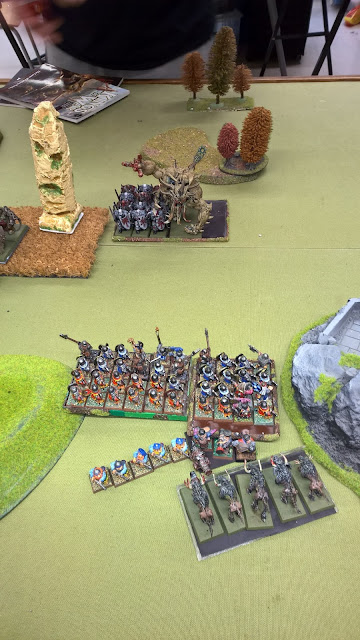 And then managed to get snake eyes even after being shot at an execution range by my sharp shooters (anything but snake eyes would have routed them!) 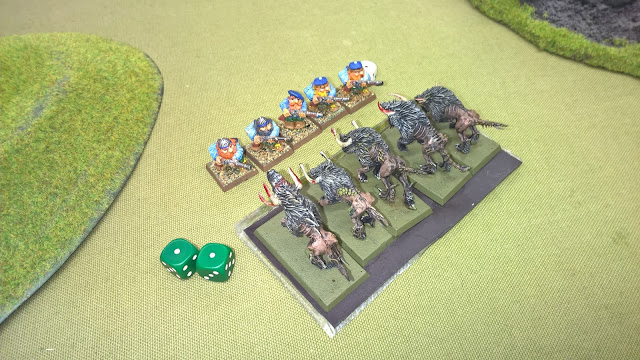 Magus Deepshit observing his minions from the safety of distance... my Ironguard had the opportunity to win the day as they charged again against the wavering Varangur elite, but their hands started to feel the wear from waving those massive hammers and the evil clansmen stayed in the fight and eventually took out the Dwarven elite... 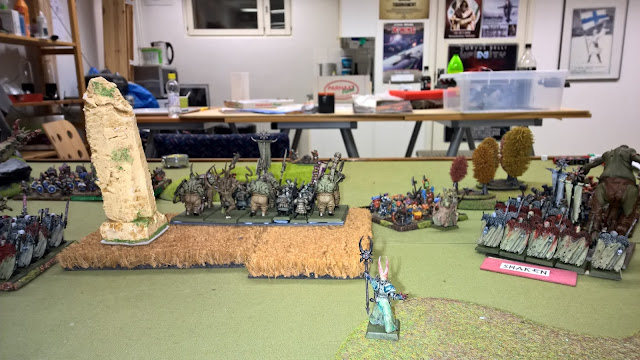 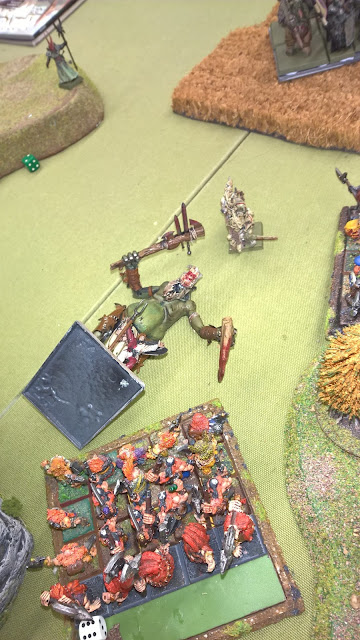 Finally my berserkers were free to charge and on they went to
claim vengeance for their fallen elite kin. With their 23
attacks they finished the already more than half dead Varangur elites.
I needed my Berserkers to move rapidly forward after the victory to reach the
target area during the possibly last, 6th round, but to my disappointement rolled
a 1 on my die (which I then tested for further rolls, results were 1,1,2,2... after this
the die was released from service for eternity)

On the right flank my Bulwark horde had moved forward to challenge the other enemy unit and they were now pounding one another - Varangurs with their terrible crushing strength 2 and my spear dwarves with their bucket load of attacks... 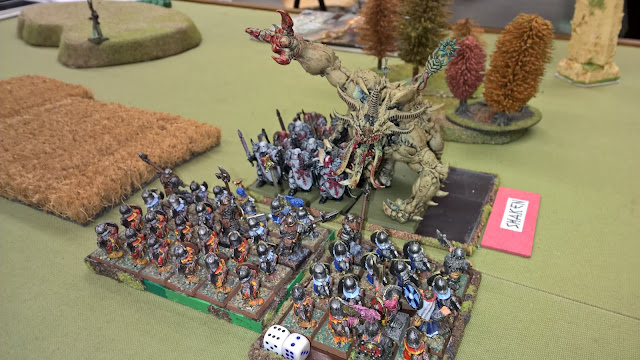 In the middle I faced very challenging decisions as I pondered on how could I still win the game... I decided to take the Varangur horde by the horns and my charged them alone! And true to his name, his strikes were true and the enemy horde broke before his fury and cold steel! Great victory for my King! 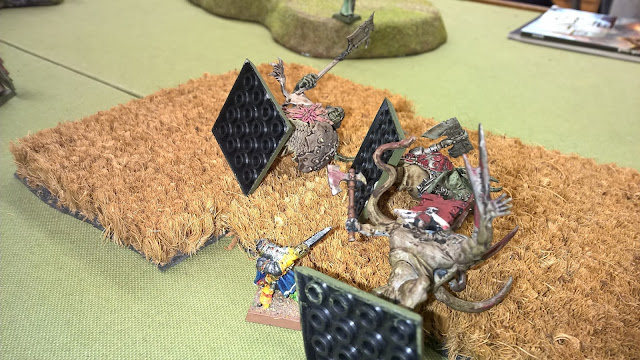 Final moments of the game saw the epic confrontation of army commanders fighting
for the control of this strategic, but muddy field! 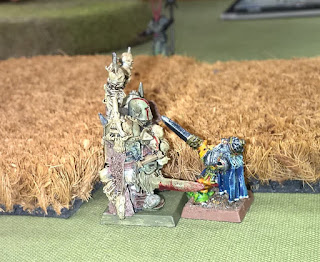 This figth was not finished and hence the name of Chieftain Urluk Smellyfart
is now written in the great book of grudges of the Truesteel clan.

Those terrible, unbreakable wolves then pounced my sharp shooters and
finished them off... 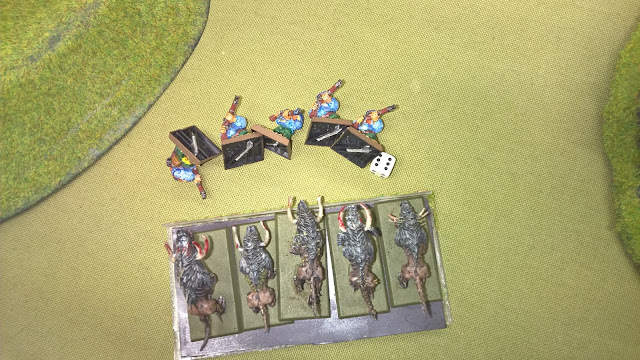 Officially the game ended as the dice gods didn't allow for round 7.

As you can see, the Varangur army has been smashed with only one proper unit still standing and facing my Bulwark horde. Technically Kim has won a marginal victory in points, as my units haven't yet reached the target area... ;-)

We agreed to play the 7th round

While the captains were fighting it out...

My left flank units rushed towards the target area, my warsmith finished the wolves by charging them  in the flank claiming vengeance for all those war machine crews and shooters! Unfortunately the final counter charge from the last varangur unit finished my Bulwark horde. 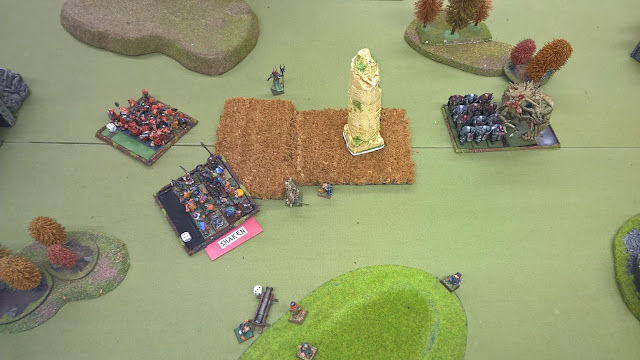 You are in my book of GRUDGES! 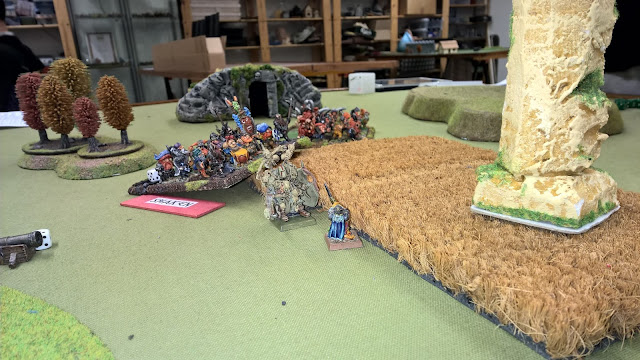 Great game - lot of fun and exciting moments and it was a very very close call!
Lähettänyt Teemu klo 23.42