Congo: Run for it!

June issue of Wargames Illustrated has excellent content! One of goodies on offer is two new scenarios for Congo. Kalle and me decided to test Cowrie if Coumba -scenario, where Whitewoman's Expedition column is trying to escape the wrath of the natives with a valuable artifact. This adventure is full of dramatic events and the new special rules (night, confusion and exhausted) give a nice extra flavor.

Painted some White woman adventurers (Copplestone Casting) and wild animals (Foundry) this week for the game: 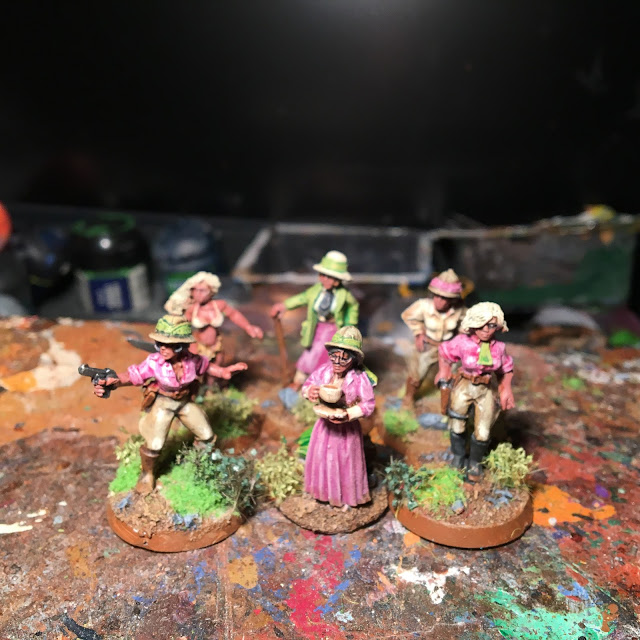 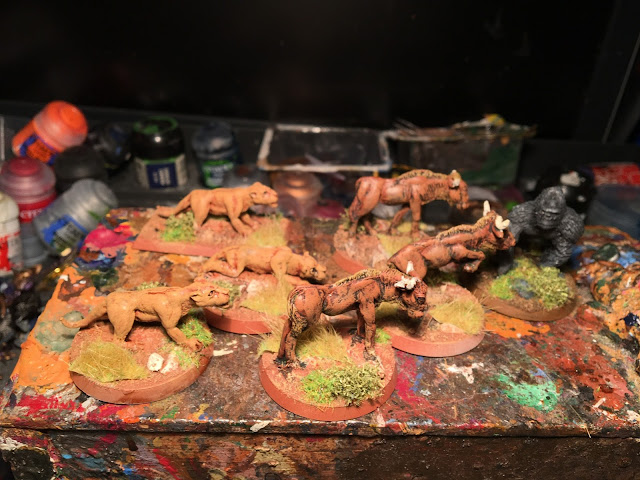 Read on to find out how these chicks fared in the untamed jungle!

So the girls need to escape to the ship waiting at the river. Natives chase them. VP's are given as follows: 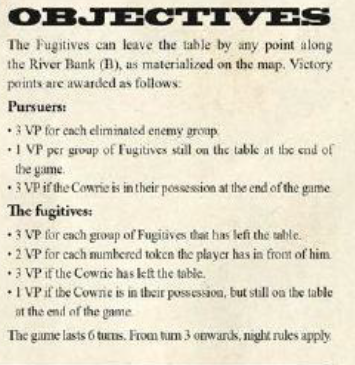 The field contains six area terrain elements, that are dangerous terrain and contain a loot counter numbered 1-6. Each counter also activated an event...

During the first round natives didn't use any activation cards and I had to pick random cards. Luckily I got pretty good ones. Moved 4 units to the board and shot at the native prince and his retinue of dangerous looking holy (and frenzied) warriors 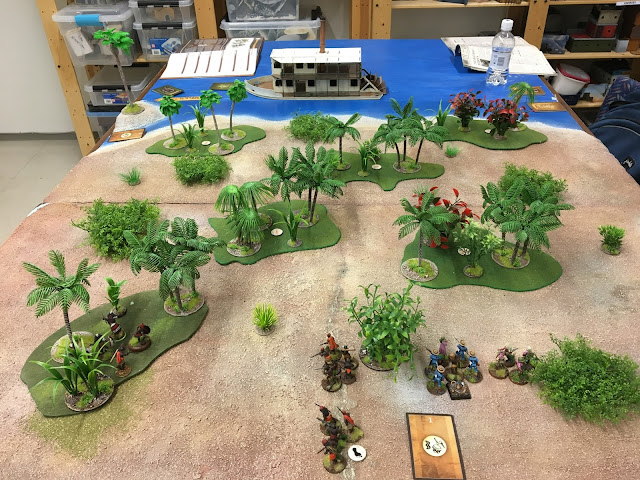 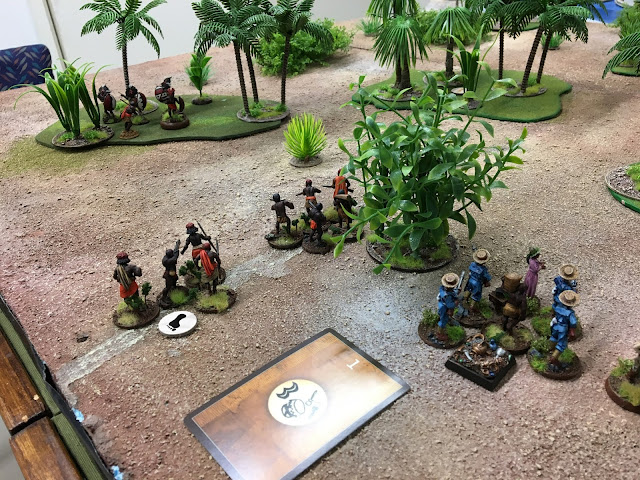 Scouts move in ready to scout the path ahead. Trained Askaris drop two holy warriors with their rifle fire - huzzah! 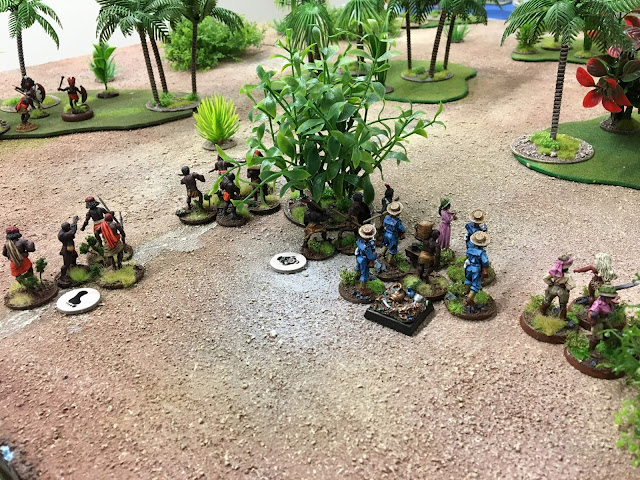 Native Prince and his remaining warriors charged my Askaris sacrificing one of their number. Three Askaris fell and the last fled in terror! 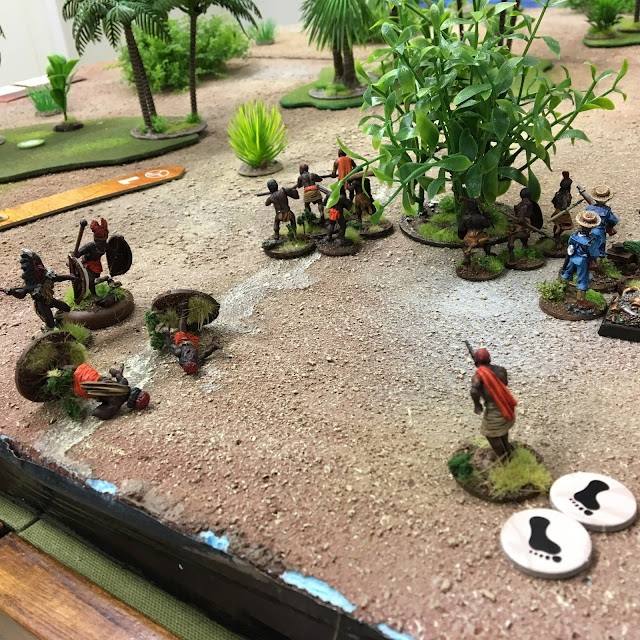 This was soon retaliated as fire from my troops dropped the last holy warrior and the Prince fled the battlefield. Was he too brave or just too fool? My young warriors watch him go. 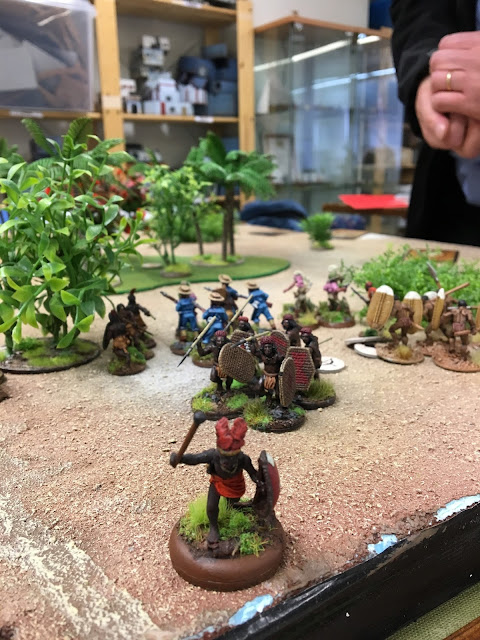 Round 3. Animals on Rampage!

My loot searching and Kalle's tricks (the pursuers get to look up one token and activate one token in the beginning of each round) launched a tide of wild animals to the field. First a heard of Gnus stampeded through my Askaris... 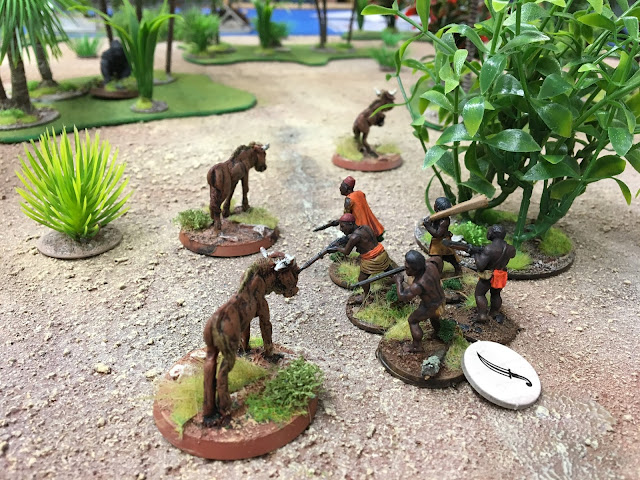 And then this huge gorilla was aroused from it's nap! Oh dear... I even threw some fuel to this fire by enraging this beast by shooting (but not killing) at it! 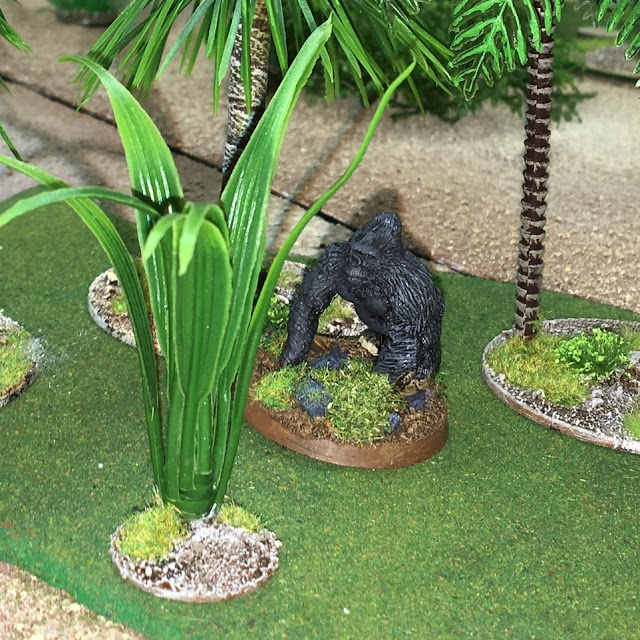 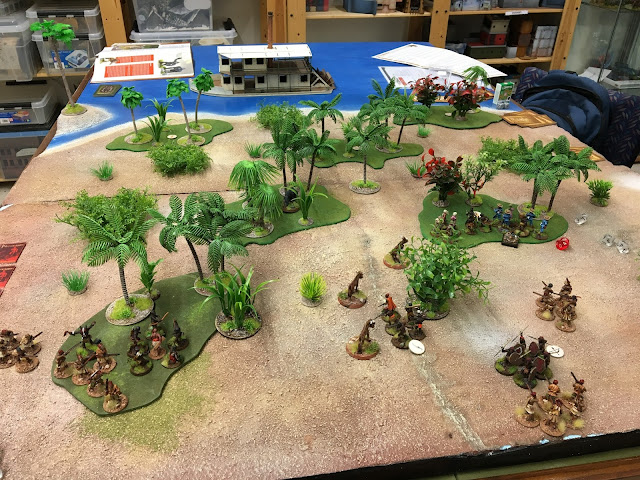 Four enemy units on the table - and the GOROLLA. My archers on the left have picked up the first loot counter and my forces furthest up are going for the next one. My remaining Trained Askari group and Young warriors are defending(?) my rear... Maybe I should already be further on my way... (this is the moment when I rechecked my objectives!)

As usually is the blackman's fate in the brutal world of Colonial Congo, again my natives groups had to bear the brunt of the pursuer's wrath...

Witch doctor and his minions harass my archers, that pour arrows at them, but the thick jungle protects all equally well. 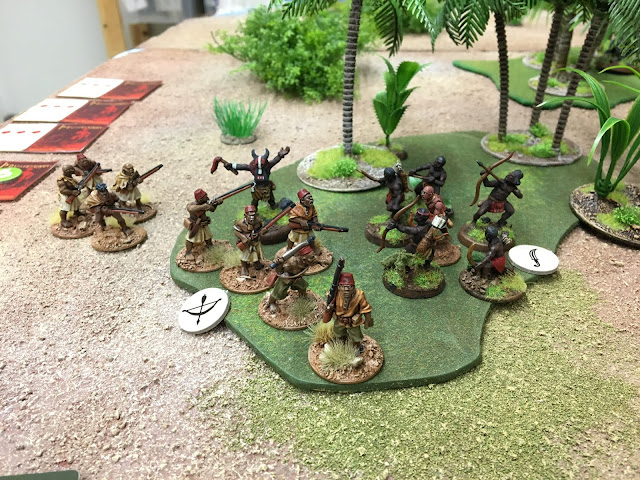 My young warriors take lot of fire and lose their nerve. As a revenge my Trained askaris take our several enemy musket wielding Ruga Rugas 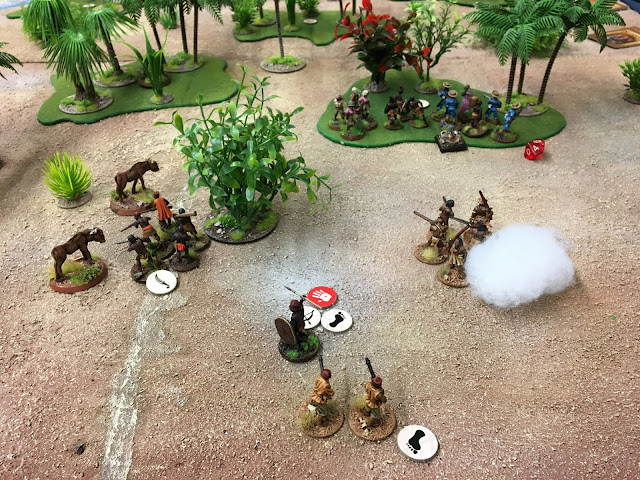 Deadly date with the beast

The jungle cracked and leafs fell as the raged gorilla charged forward towards my girls...


"Don't you know my husband is your King?"
Jane is playing the "Retired officer" -role 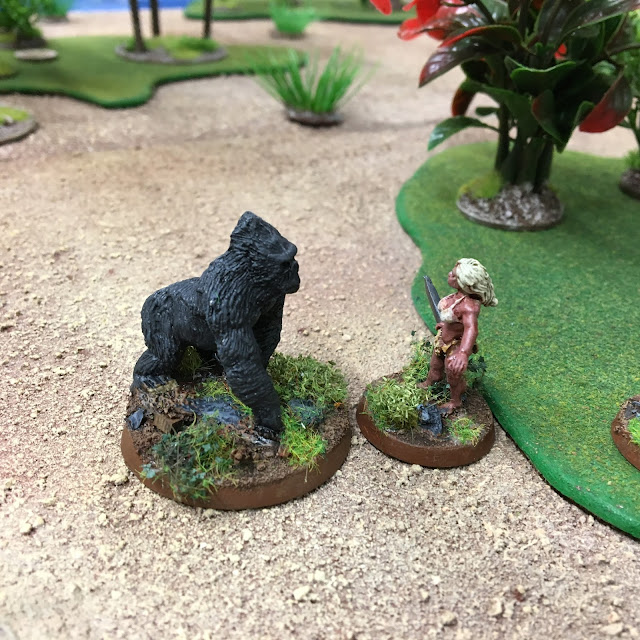 "Where are yous manners?" 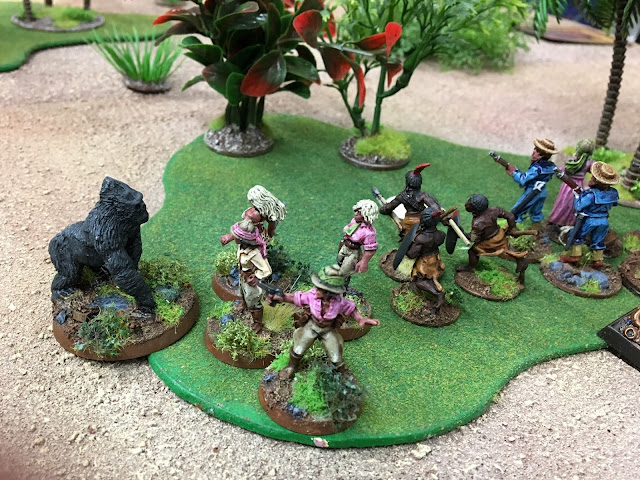 For few moments my adventuring girls on their pink shirts managed to fend of the beast and other enemies, but eventually their shirts turned to a darker shade of red... 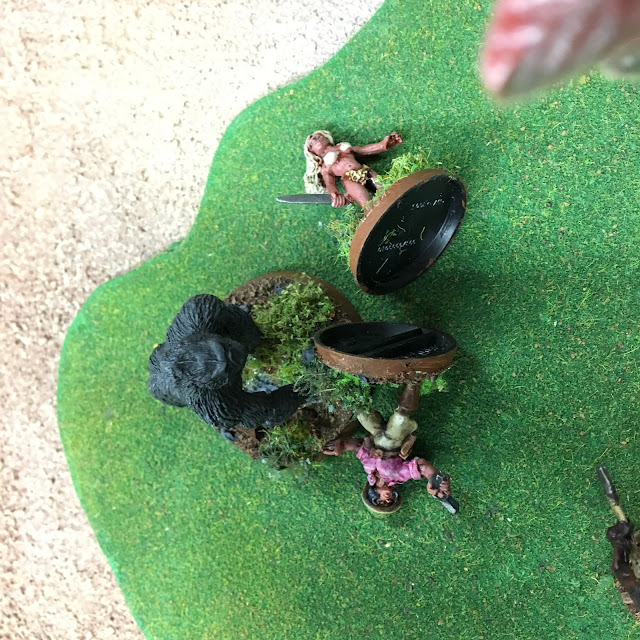 Clearly going for the MVP-status, the gorilla had already taken out two of my groups (scouts as well) as my explorer and his retinue dashed forward in a growing panic, quickly collecting some loot on the way. Hidden from view is the remaining unit of Trained Askaris also making their best to escape. 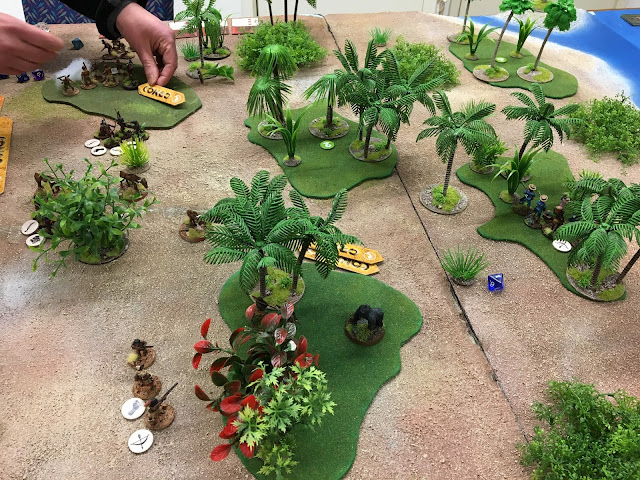 My soldiers fire one last salvo to take out the beast! 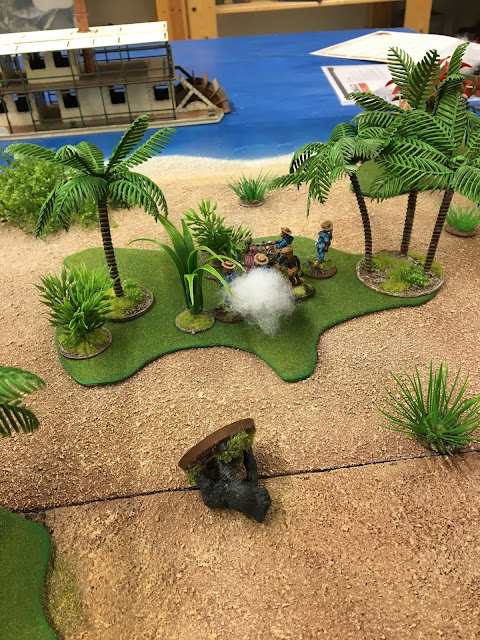 * What and exciting game and a great and balanced scenario
* Kalle won the game 18-14 through
- slaughtering 6 of my 7 groups - several of them though cunning use of terror (group with 4 stress token and just one model left is removed from game)
- if my Trained Askaris would also have made it to the boat (and they were close!), the score would have swinged to my favor 17-15 - so the game was decided  on the last round
- I got my points from 4 loot tokens (8p) and escaping with the Cowrie (3p.) and one unit(3p.) 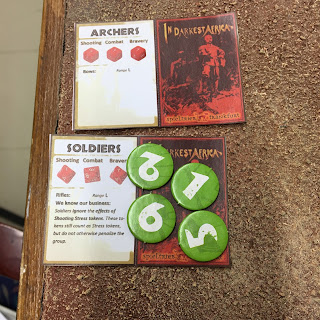 Time for some tea...
My exporer Lady Di in the safety of the boat and his loyal soldiers
- these were my only survivors...
But we have the artifact!!! 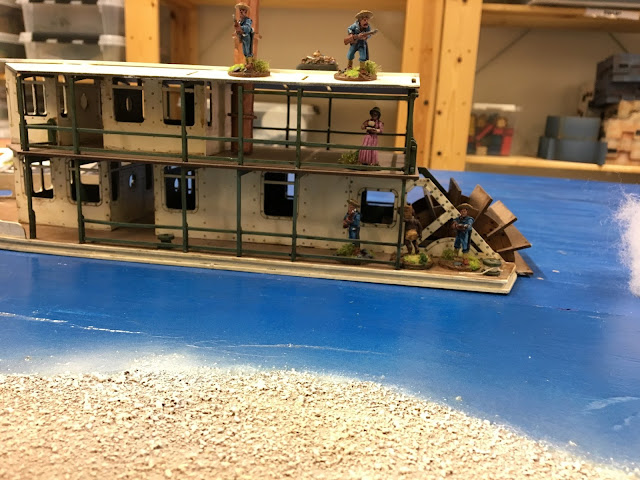