And a first Game with Erebor reclaimed

I'm preparing an army for a coming ME SBG tournament and wanted to try out the new edition before it... so I speed painted my force for the game with Kalle...

Read further for more pics on the minis and how they are converted... and of course to learn how the battle unfolded!

Just on principle I'm boycotting those awesome minis from WF. They are truly beautiful, but the pricing is simply a rip off. Hence I went creative...

Goat / Ram riders are a combination of Citadel's plastic sets: bodies are from Grim Hammers and spears from Warriors of Erebor. Them beasts are a ram pack from Unreleased miniatures, Dain Ironfoot is from there as well. 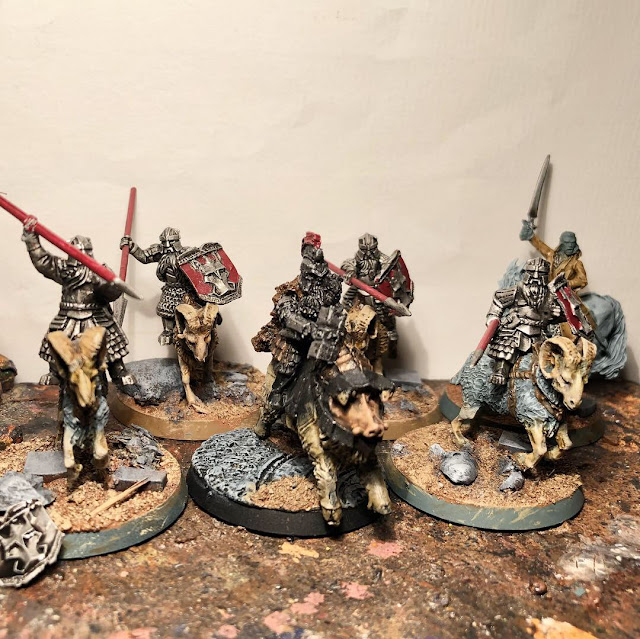 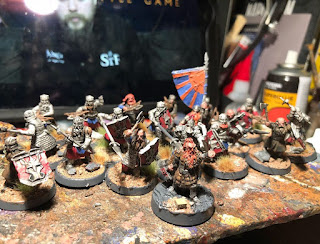 Crossbows are Citadel plastics with arms and crossbows from
FireForge's Medieval plastic minis. 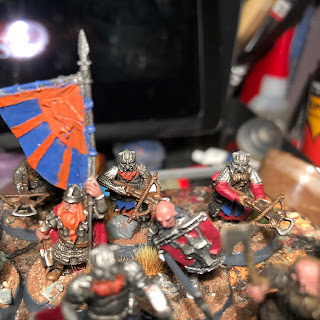 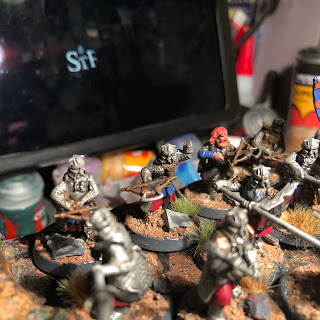 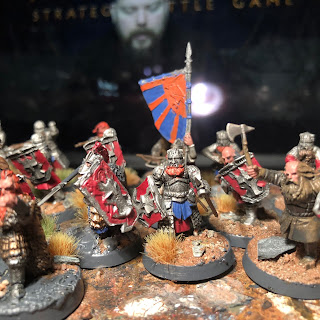 We played Seize the Prize from MESBG rulebook. There one has to crab an objective (dig it up!) from the centre of the field and gain VP from having it in the end of the battle and even more, if you can exit with it via your opponent's table half. The One Ring played this role.

Iron Hills formed a steelwall with their shields and softer survivors of LT took cover behind them on the left. IH Crossbows had a good view on the enemy and Dain and his Goat Riders took the right flank. Both armies were naturally centrally deployed...

Kalle had an Isengard force (yes wrong minis mostly) and 3 Trolls in it! On his left there were crossbow uruks and then more Uruk infantry with Lurtz leading from behind...

Start of the battle

First two rounds I gave initiative to Kalle and kept peppering the enemy from my positions. Dain and Goat riders made an outflanking move, which was countered with one of the trolls. Two others headed straight t my lines...

Uruks won the initiative. So I had to call a few heroic moves, which were countered too.
One of the trolls charge Dain and was then surrounded by goat riders counter charging.

Two trolls charged my lines with a warband of Uruks supporting them... but the Uruks got too tight and as my counter charges went in, these trolls too found themself trapped! I started the combat phase by calling Thorin's free heroic combat. He then finished off the first troll (it had been wounded by an arrow) and then led another charge (which actually finally trapped the third troll).

I slayed all three trolls in just one round of combat (yes, few might points were spent)!!!

With them trolls taken out my forces moved on with initiative to mob the rest of the enemy, Goat riders were leading the charge. Crossbows took out 4 Uruks! Thorin himself heroic combatted again and proceeded to slay the Uruk that had made the grave mistake to touch the heirloom of Durin's Line!

Last of the Uruks scattering in panic before Thorin!