Social media and naturally we too had been buzzing about Mortal Gods since end of 2018. Having been playing Test of Honor and beeing a fan of this classical era, I was really looking forward to this.
So pre-orders in and the waiting started. I also organized a joint order for our gaming club and some 7 other club mates joined in. Finally in May the wait was over and I agreed a first game with another Ancient Greece enthusiast, my mate Marko. After our practice game we also ran a "launch event" at our club. Read on to learn about our first impressions. 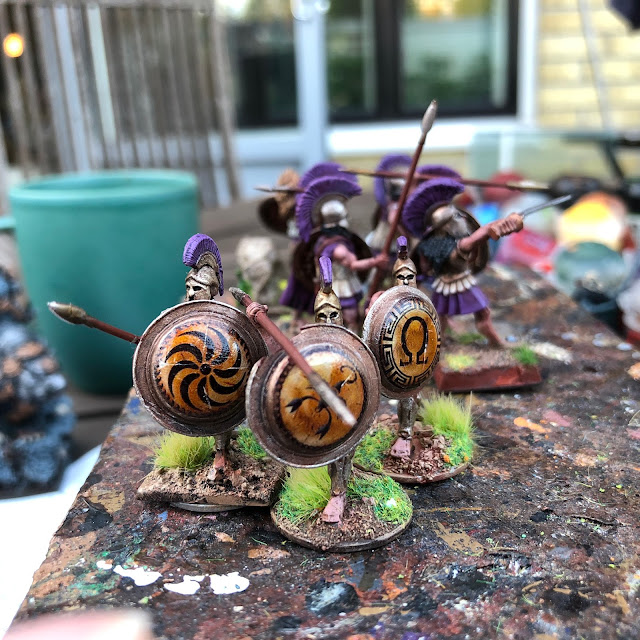 Painted some more hoplites for the first game 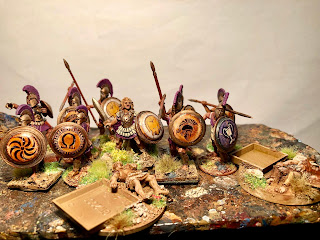 These larger hoplites are from Wargames Factory
(not sold at the moment), I find them suitable for skirmish
level gaming, as they are somewhat larger than the ones from Warlord
or Victrix. 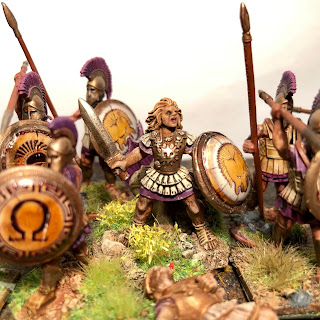 Love this model from Foundry 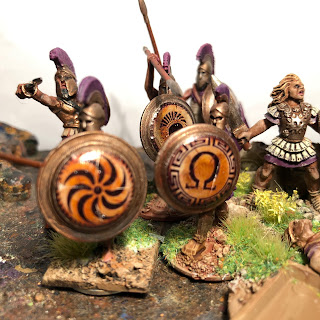 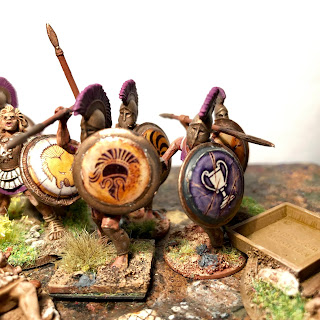 Battle at the Polis

Marko was kind enough to come over at my place and a small Polis was built in our living room. We chose a quite simple scenario: at the beginning of round 3 we would roll a D6 to decide in which of the three central sections the objective would be. In the end of round 5, whom ever controlled the objective would win the game. We had forces of bit less than 400p. Here's mine: 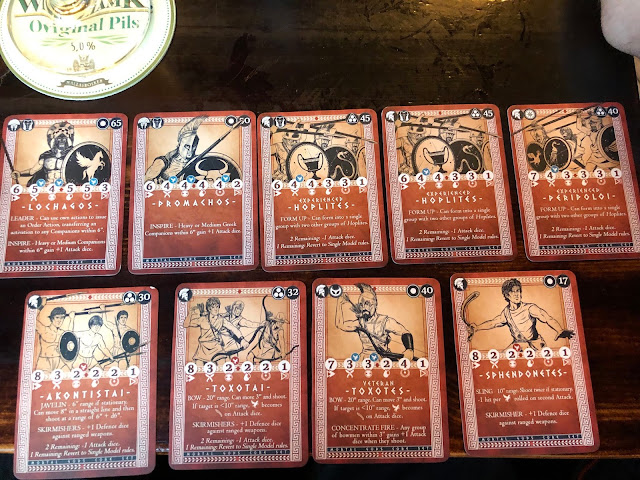 Marko's force didn't include any hoplites and just one combat hero, he had the seer though and plenty of missile skirmishers. At the start of the game we chose a couple gifts too.

During the first round I sent some missile troops to my left with the minor hero. My Leader and hoplites (not yet in phalanx) stayed in the middle. 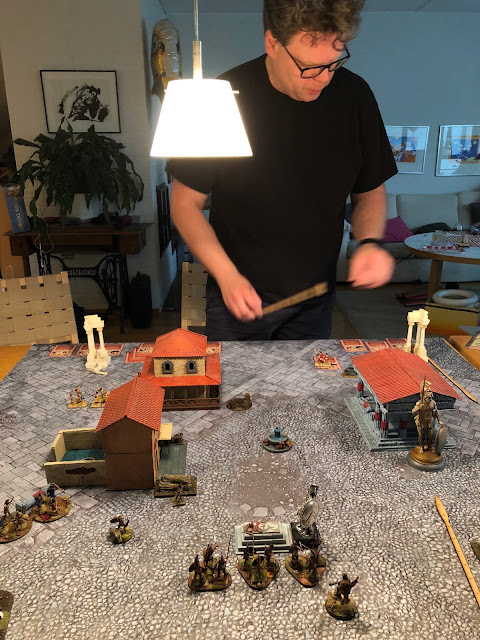 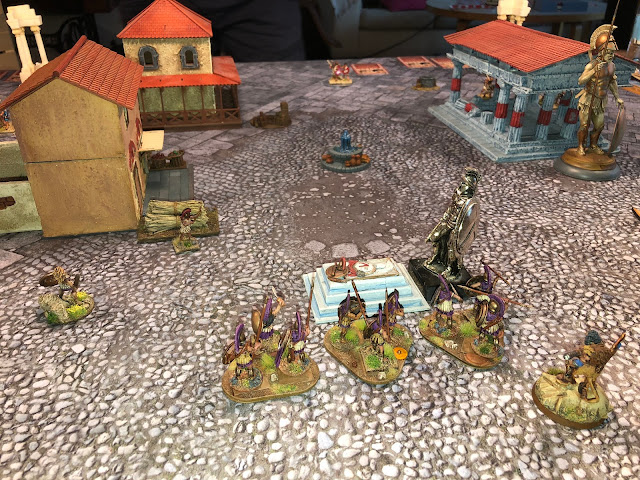 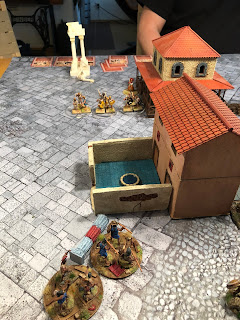 First blood was drawn as skirmishers started peppering one another with all kinds of missiles. My shooting wasn't optimal, as my veteran Toxotes was too far from my archers. 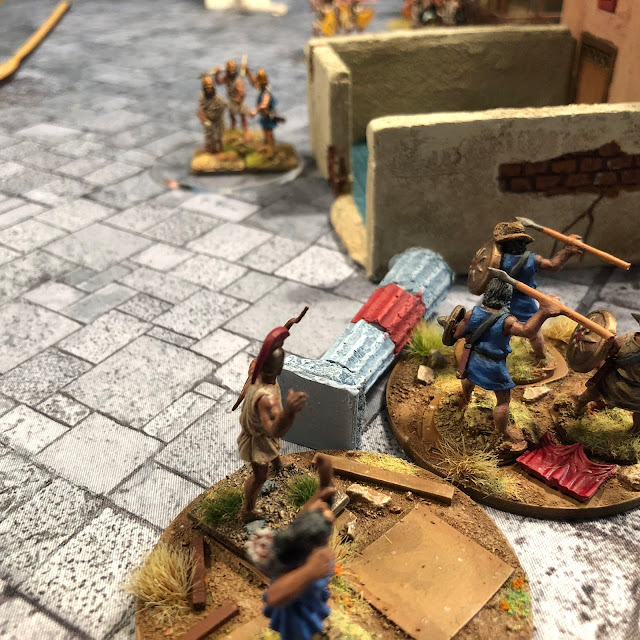 Proper nourishment was served too 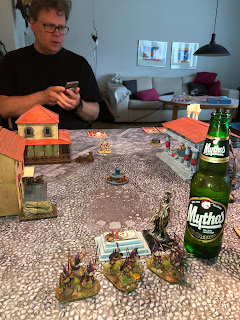 Hercules (my leader) had to make a decision - either to hang back and be eventually peppered my all those missile units or push forward and engage... well what did you expect he would choose? 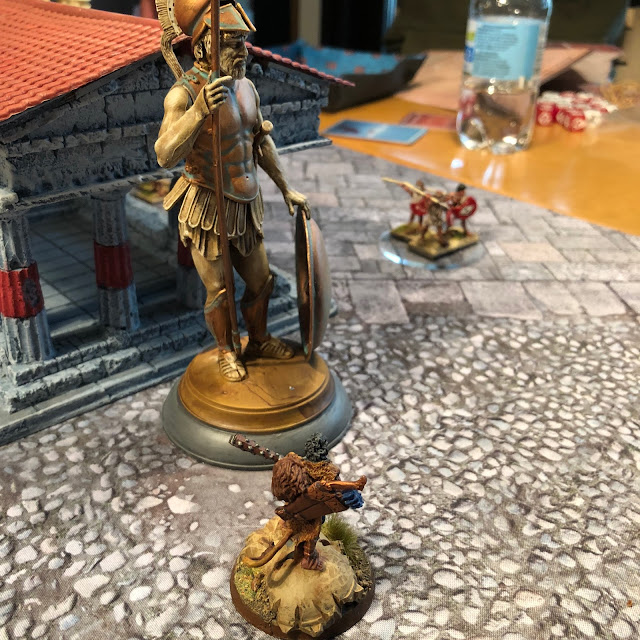 Marko's javelin tossers took out my single slinger, but the
revenge came fast! 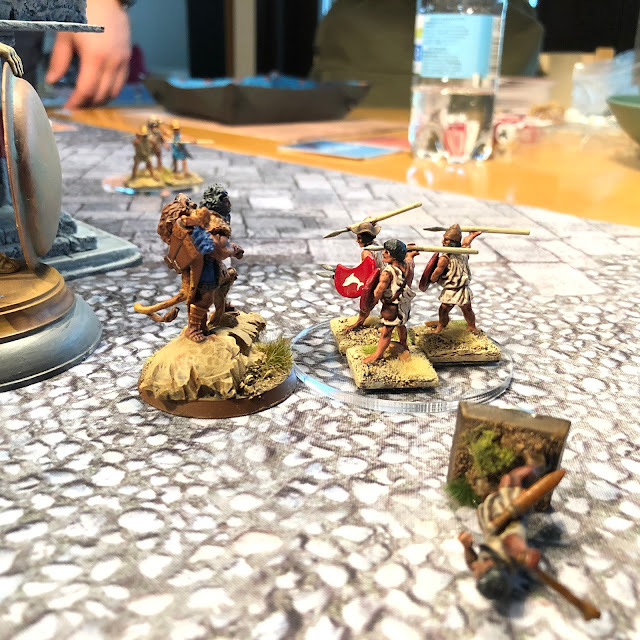 In my left flank my Promachos wanted to prove his mettle too... 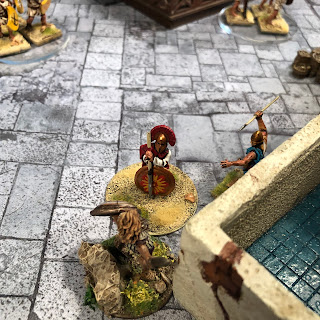 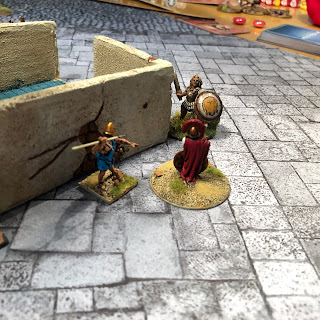 But the enemy leader was a bit too tough for him to chew! 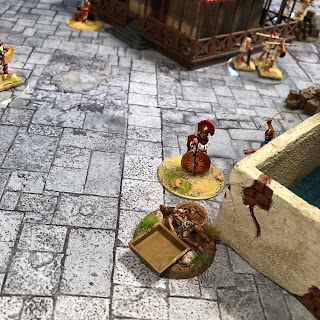 In the center my hoplites had formed a phalanx to better protect themselves from
enemy missile units lurking around. 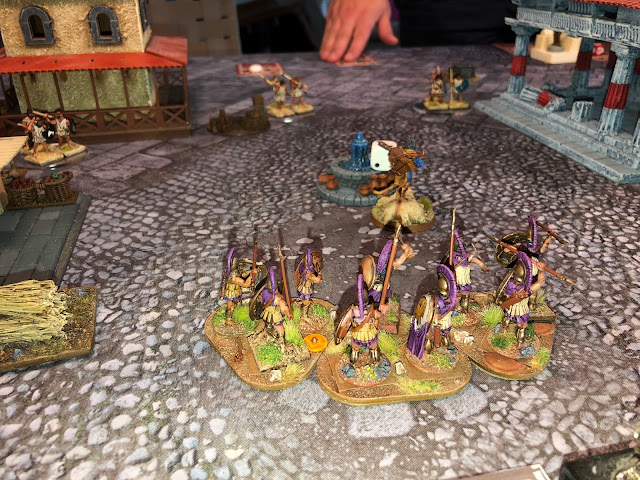 Go for the prize!

My phalanx soon dissolved as the prize was located in the somewhat damaged temple. Marko's skirmishers rapidly moved in to contest it, but my heavy hitters were on their way... 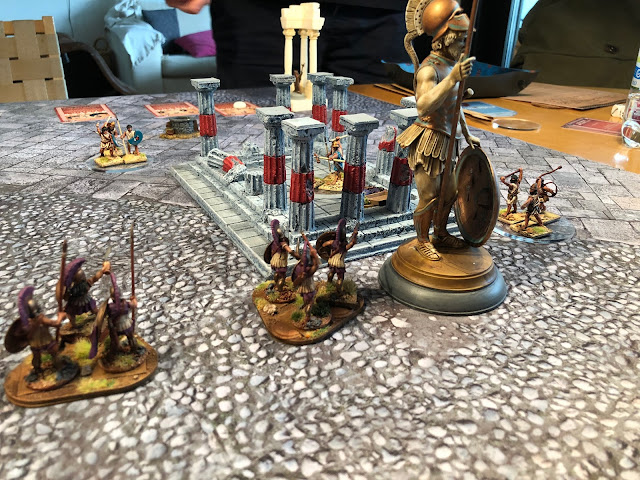 Some light troops clashed in the middle, but that was irrelevant now 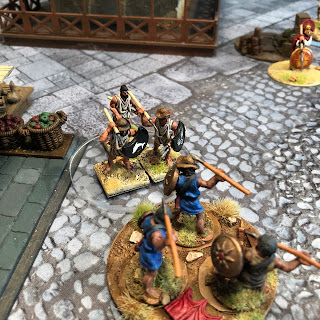 Hercules continued his rampage and rushed into the temple to engage the enemy rabble there. These pesky opponents were soon dispatched! 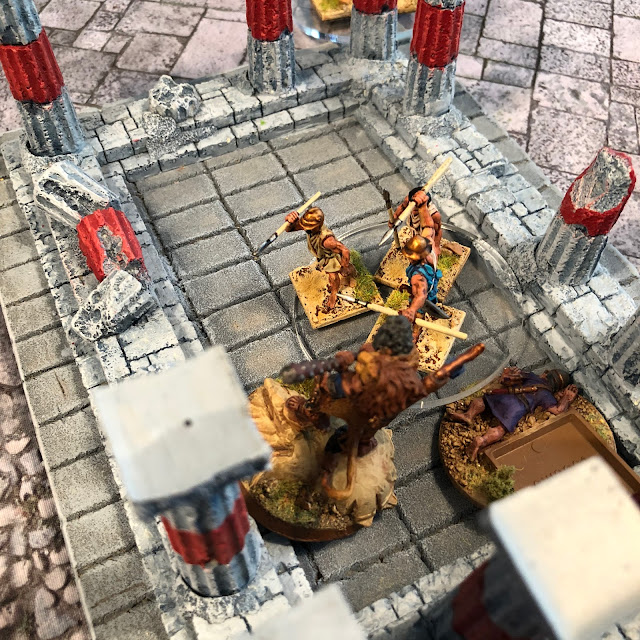 After Hercules had cleared the objective, my hoplites moved in to defend the prize and to bring their numbers to bear, should the enemy try to approach in great numbers.. 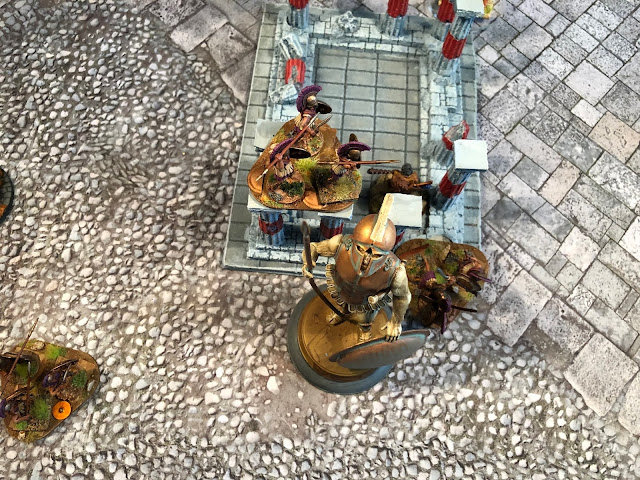 The enemy sure tried, but they were too few and too late! 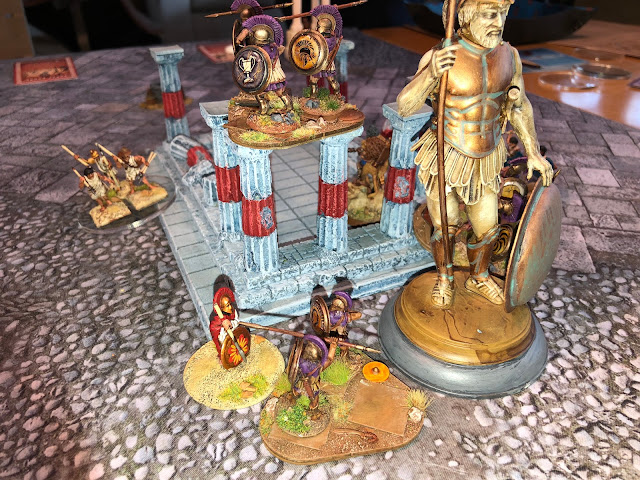 So a victory to my forces!


Few more pics on my hoplites 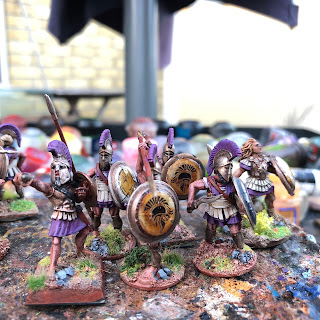 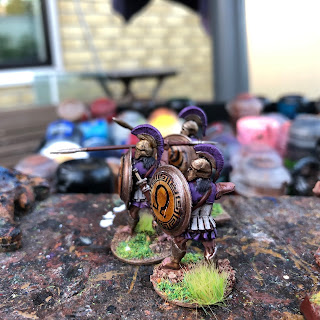 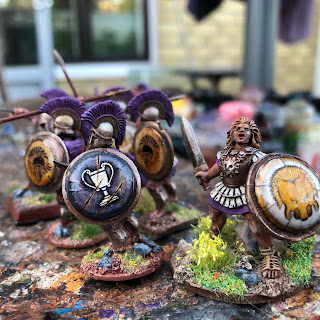 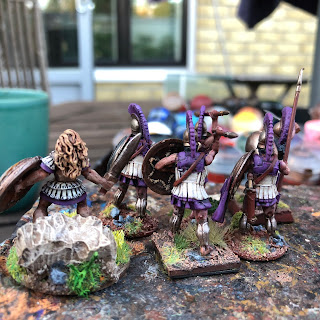 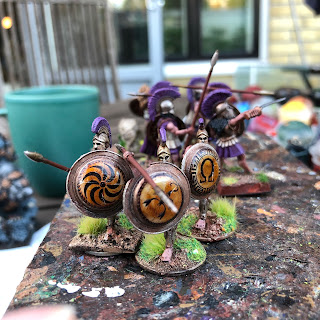