First Warband I tried and painted more minis for was MoUe. Dwarves was one of two first armies for Warhammer, when I started the hobby in 1989 or so and I've always had a soft spot for these tough warriors from the mountains. Read on to learn what I used for what in this warband. 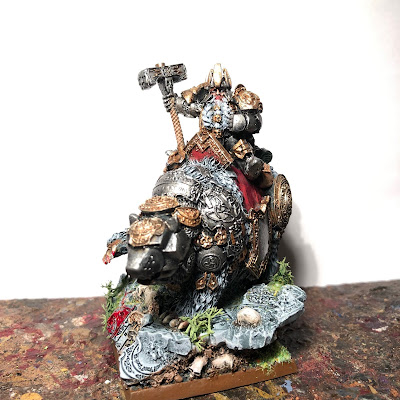 In Saga AoM I find, that warlords on beasts or flying beasts are an obvious choice: they have 10 attacks, move 12" and can cancel 8 wounds with fatigue! Some years back I had bought this awesome Scribor Miniatures dwarf lord mounted on a huge bear. I had actually forgotten I had it and was totally blown away as I found it, while gathering forces for this warband!  In all my games he has rampaged through my enemies, like the monster he is! 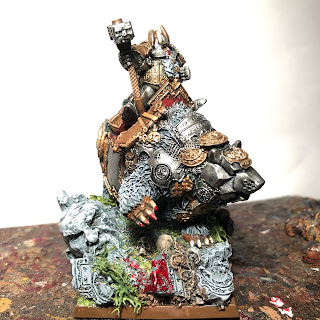 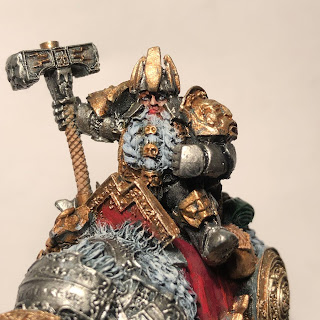 Warlord in action, making an alpha strike against enemy archers! 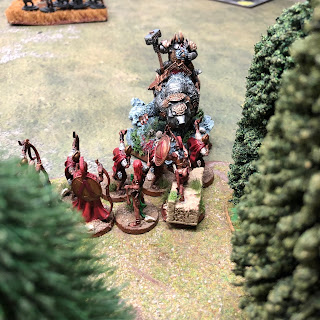 So my Warlord naturally needs an entourage! Even if this version doesn't have the Bodyguard rule... so a Lord on a mighty bear brings along his bear cavalry! MoUe could have mounted HG, but I've used them as... 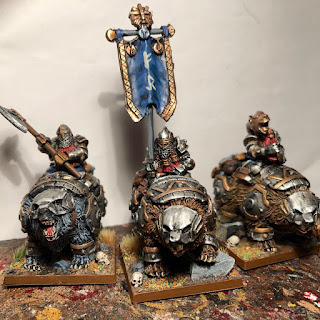 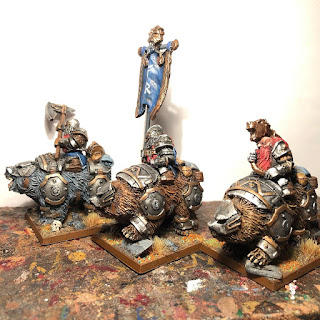 These teddy bears are from Norba Miniatures, whom make nice Dwarf miniatures on affordable prices, but their customer service is really really bad! Read on for further ugly facts on this matter...

WIP pic of the lot 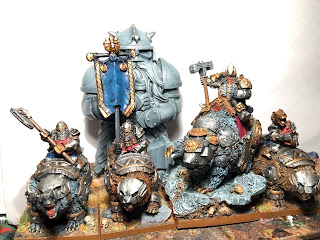 My Sorceror - an ancient model from Citadel 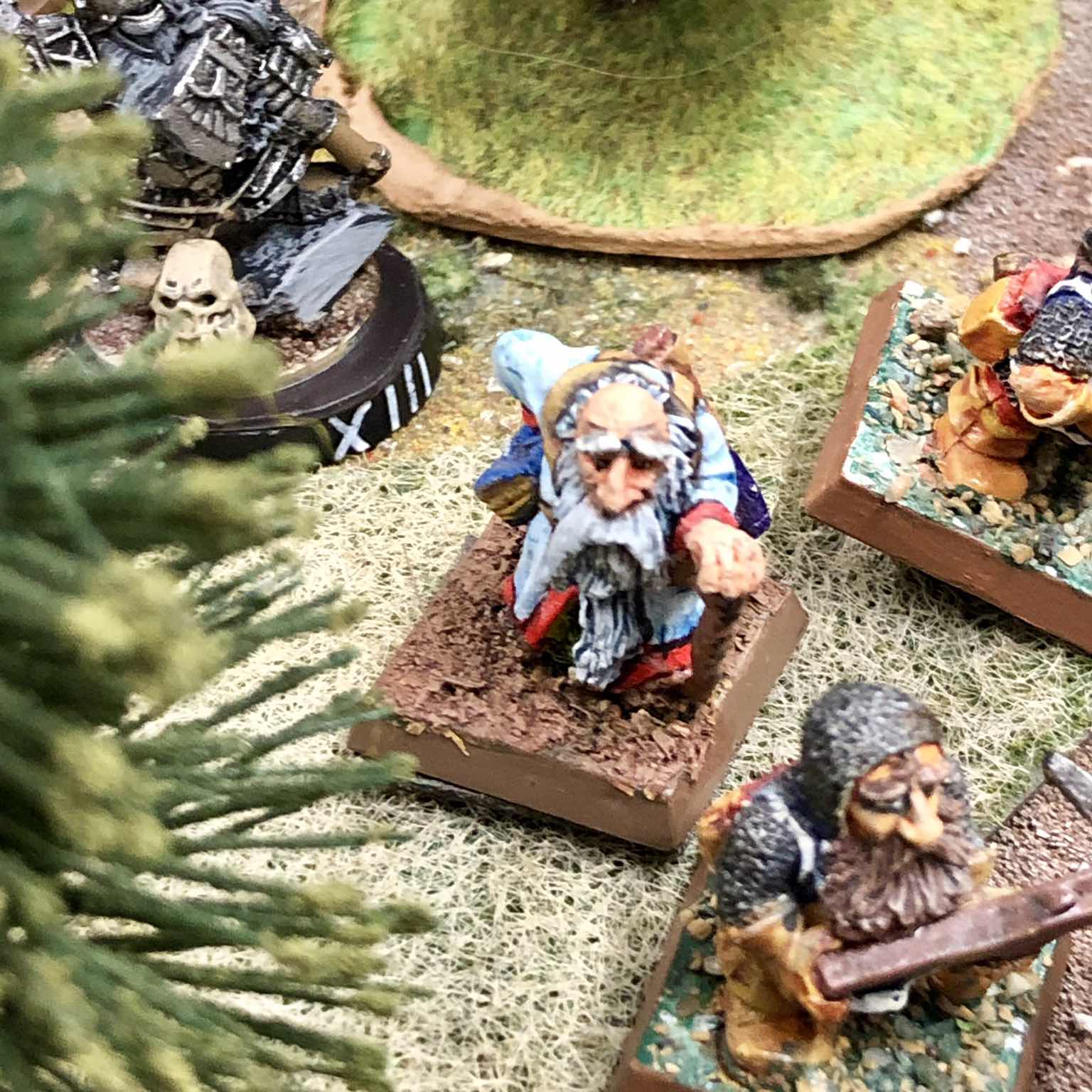 My lieutenant aka Alchemist, not so ancient miniature from Citadel 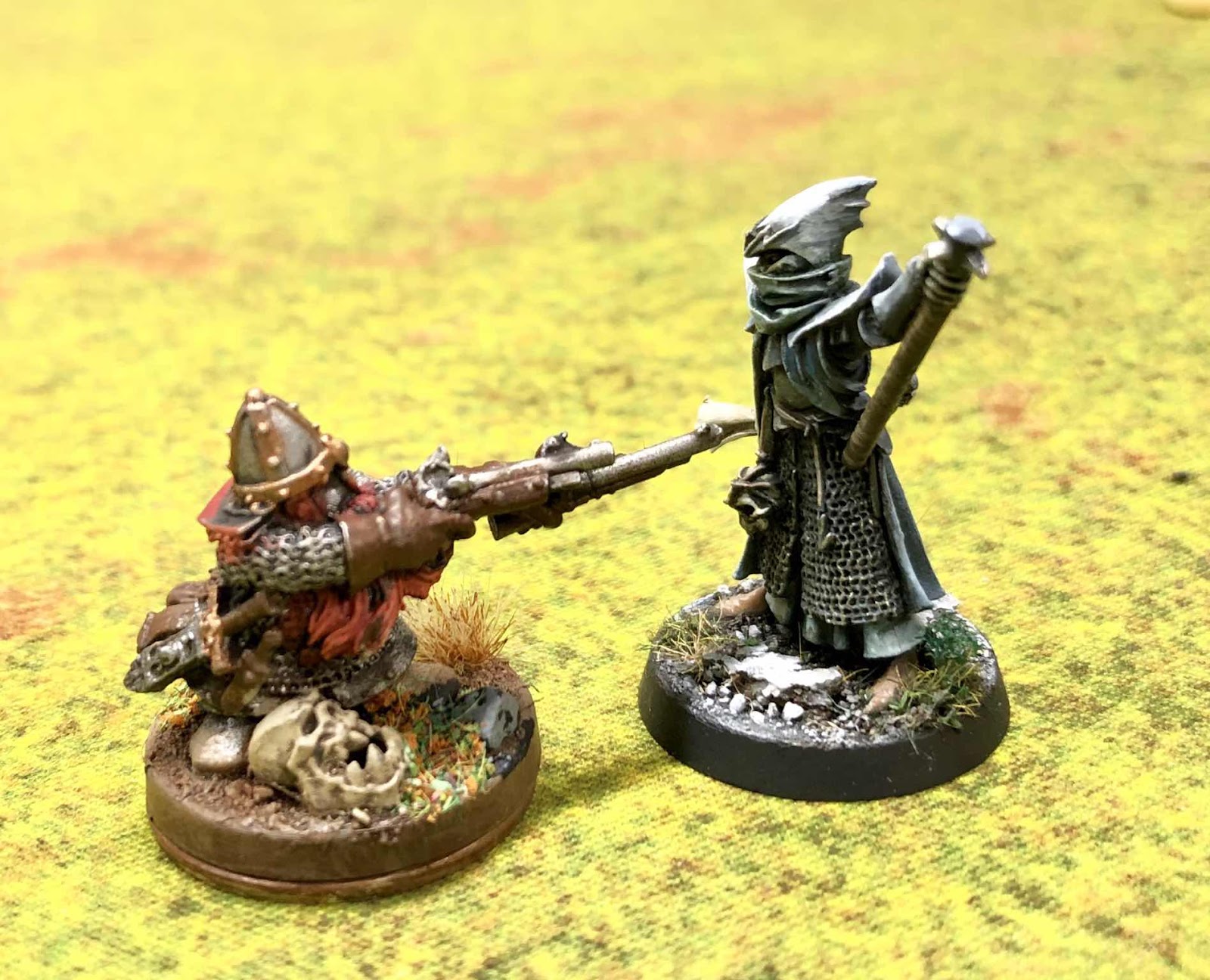 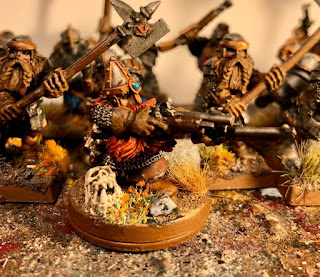 I rebased an ancient Citadel Dwarf Fire Thrower to make
a Destruction team. I haven't been very impressed with it's performance though. 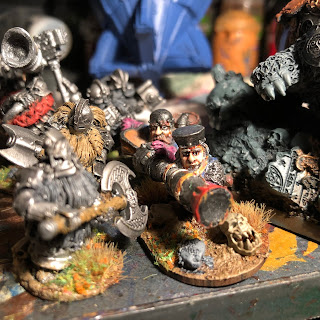 Destruction team and my Warlord in action 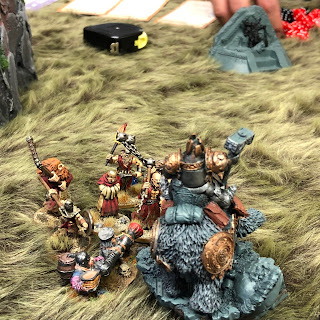 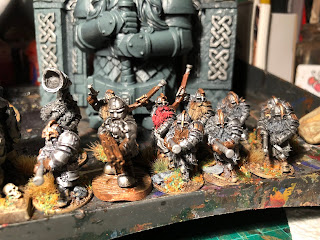 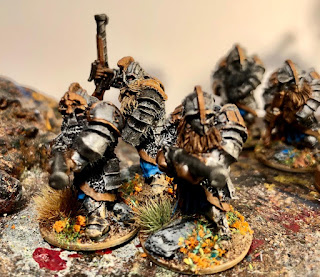 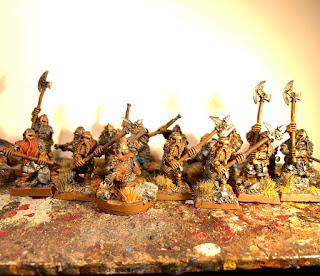 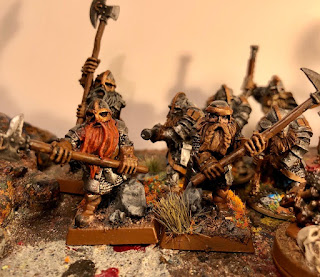 After I had played couple of games with firearms, I chose to swap
them to crossbows and digged up these quite ancient Citadel minis.
They do need rebasing!
Firearms needed to get within 6” to get the extra benefits and I DON’T think
missile troops should ever get that close! 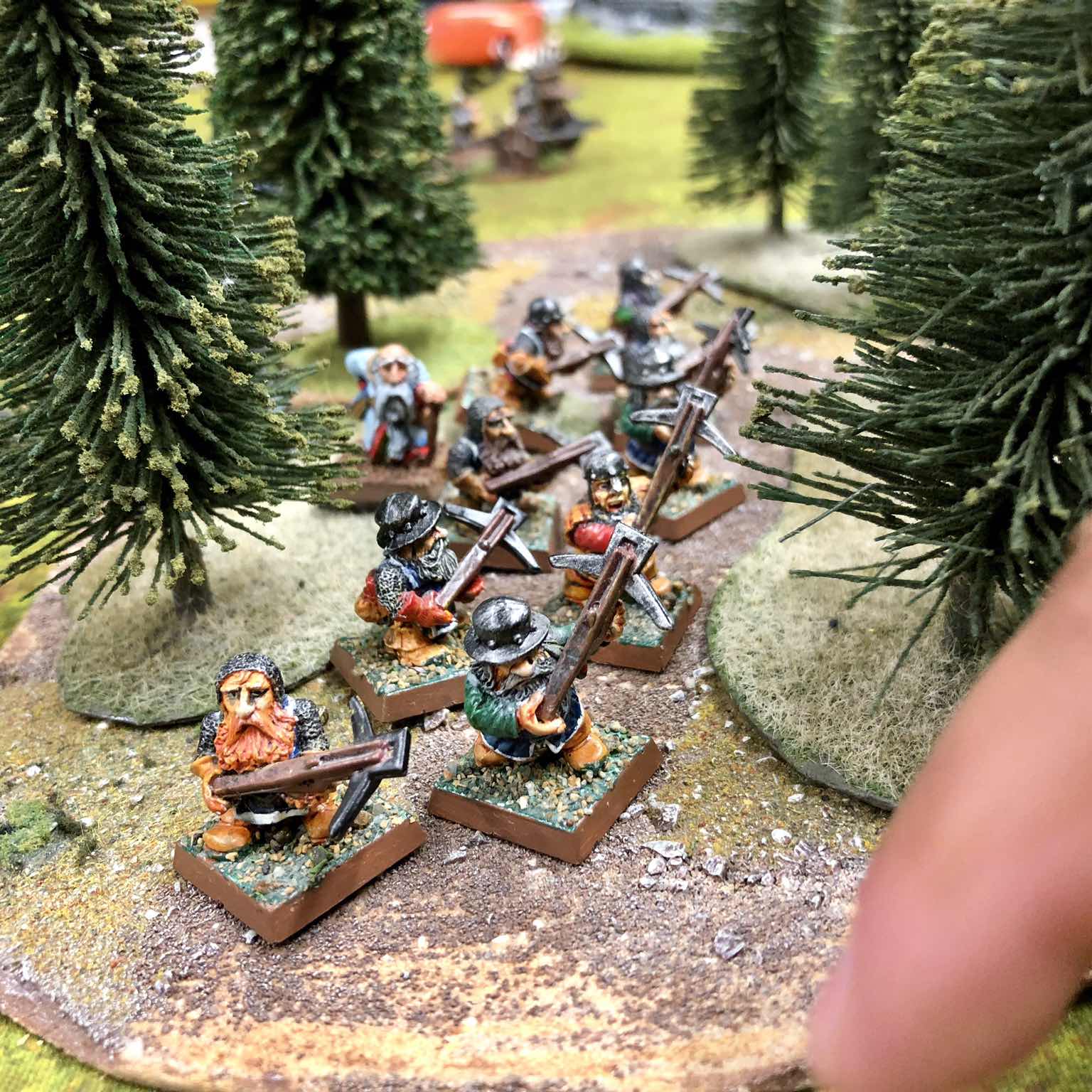 As basic warriors I have used old Warhammer dwarves.

Digged up a dwarf statue to present a Titan - a slow and heavy armored monster.
He has performed quite well, even if felled here by a Paladin from Great Kingdoms! 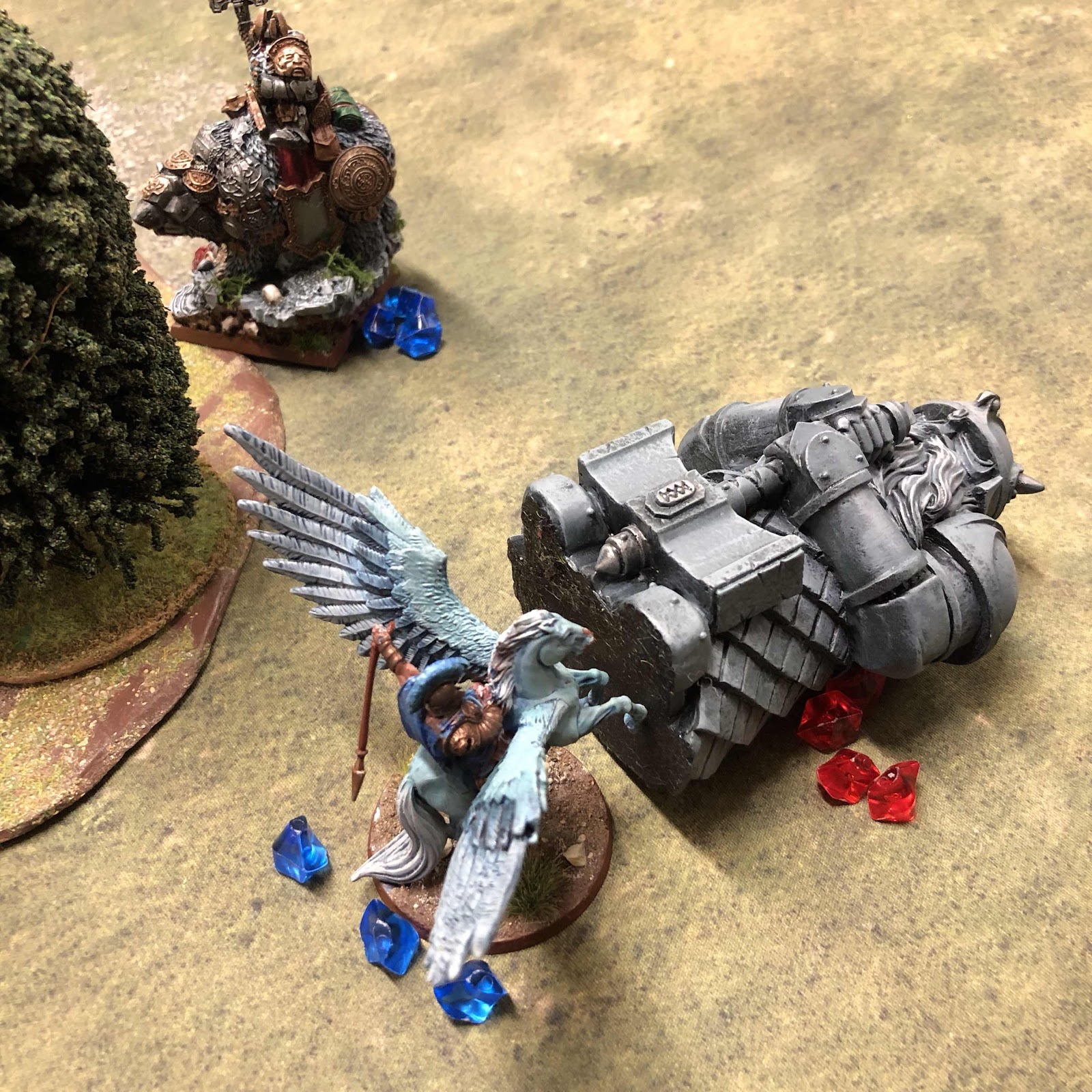 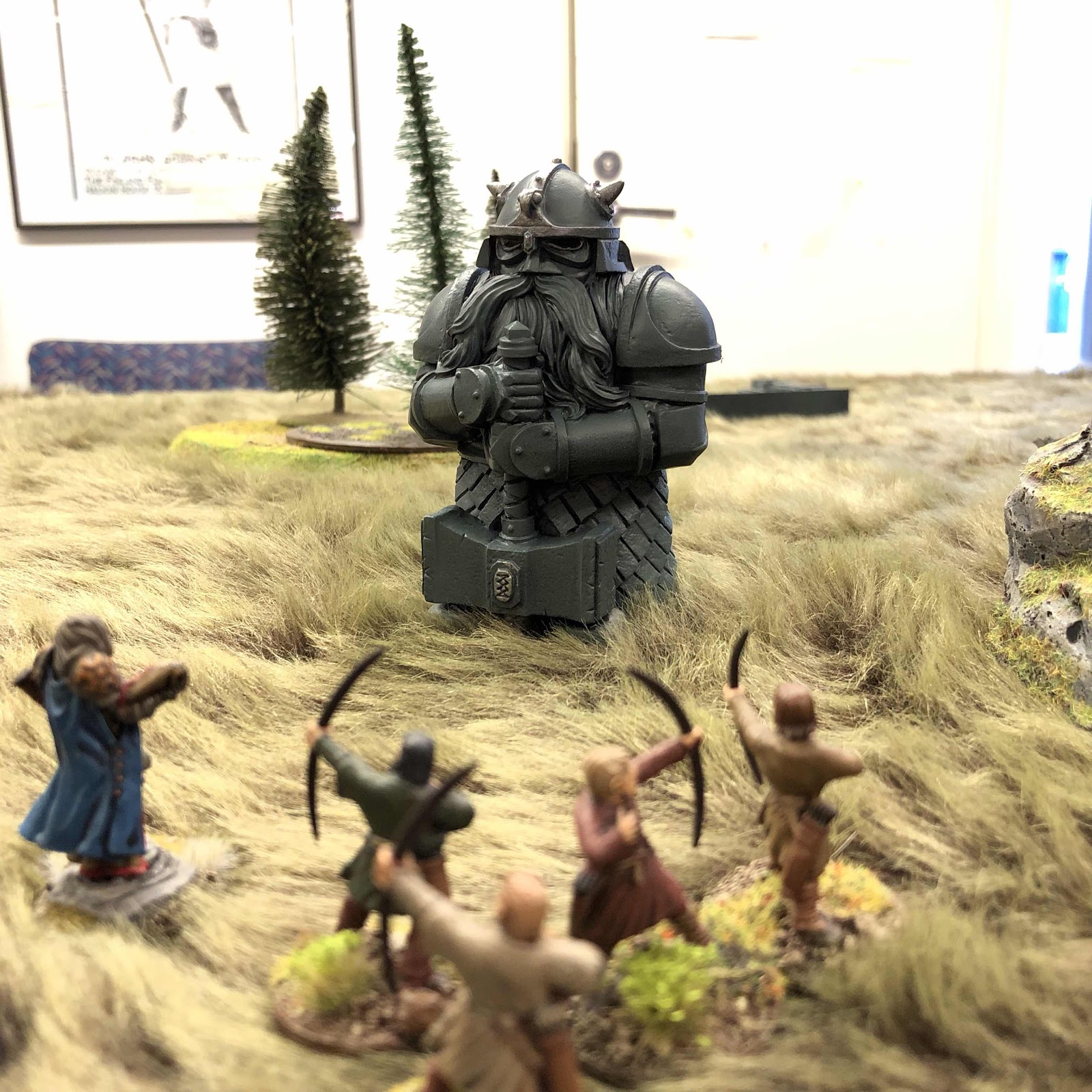 Clashing with a demonic Behemoth! 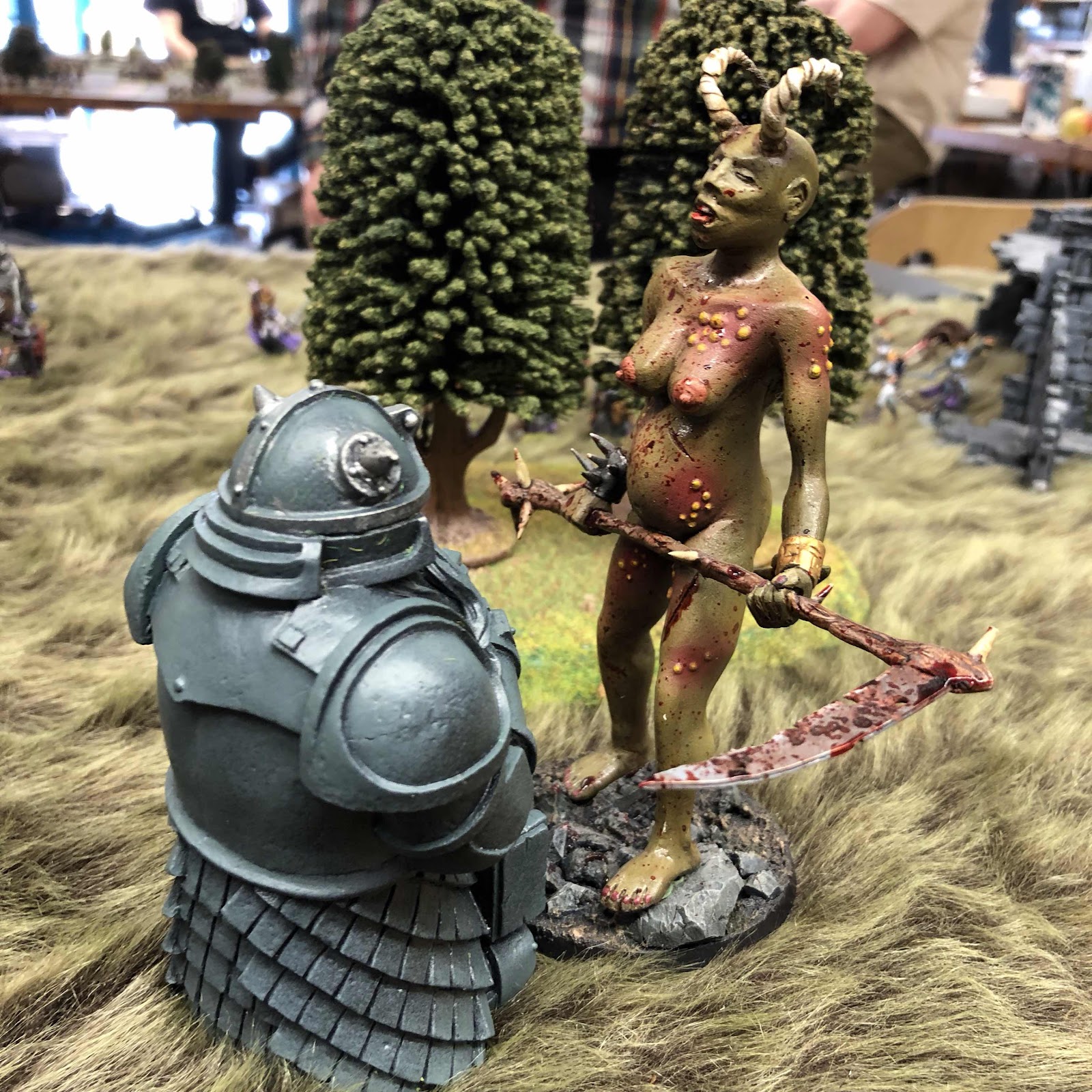 This impressive Dwarf Zeppelin is from Norba Miniatures 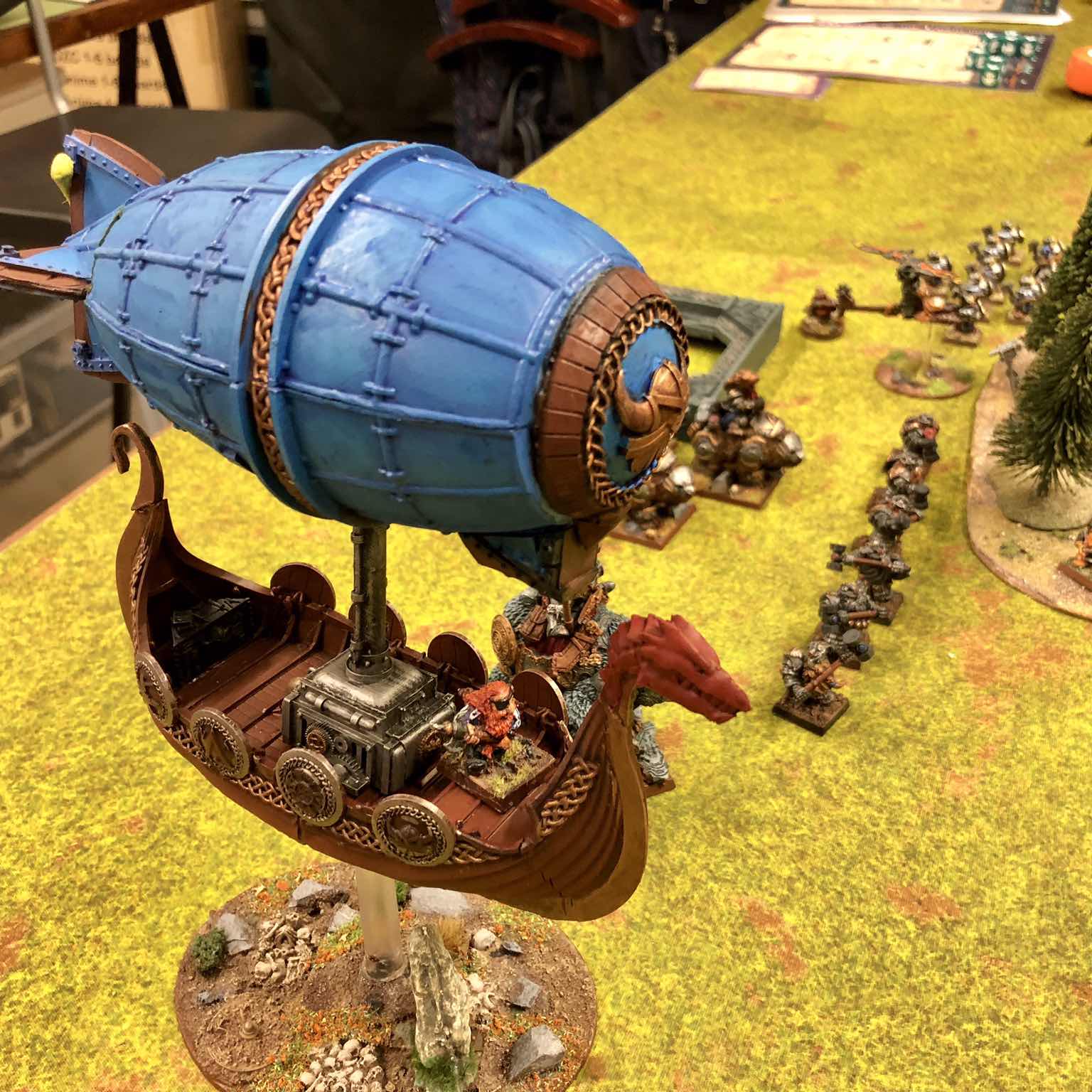 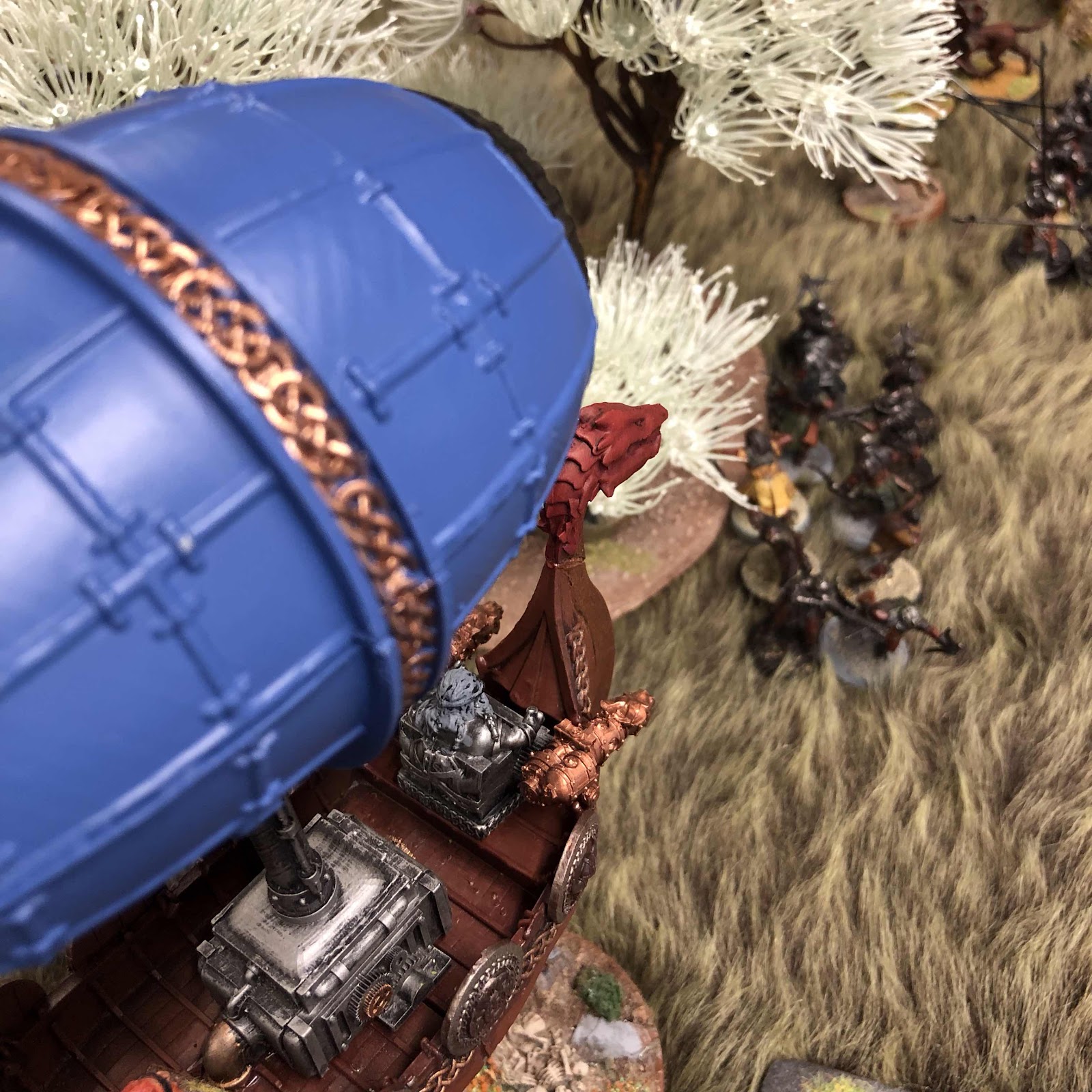 I think the Flying Warmachine is too wean an option, one should
place this beast as a flying monster. 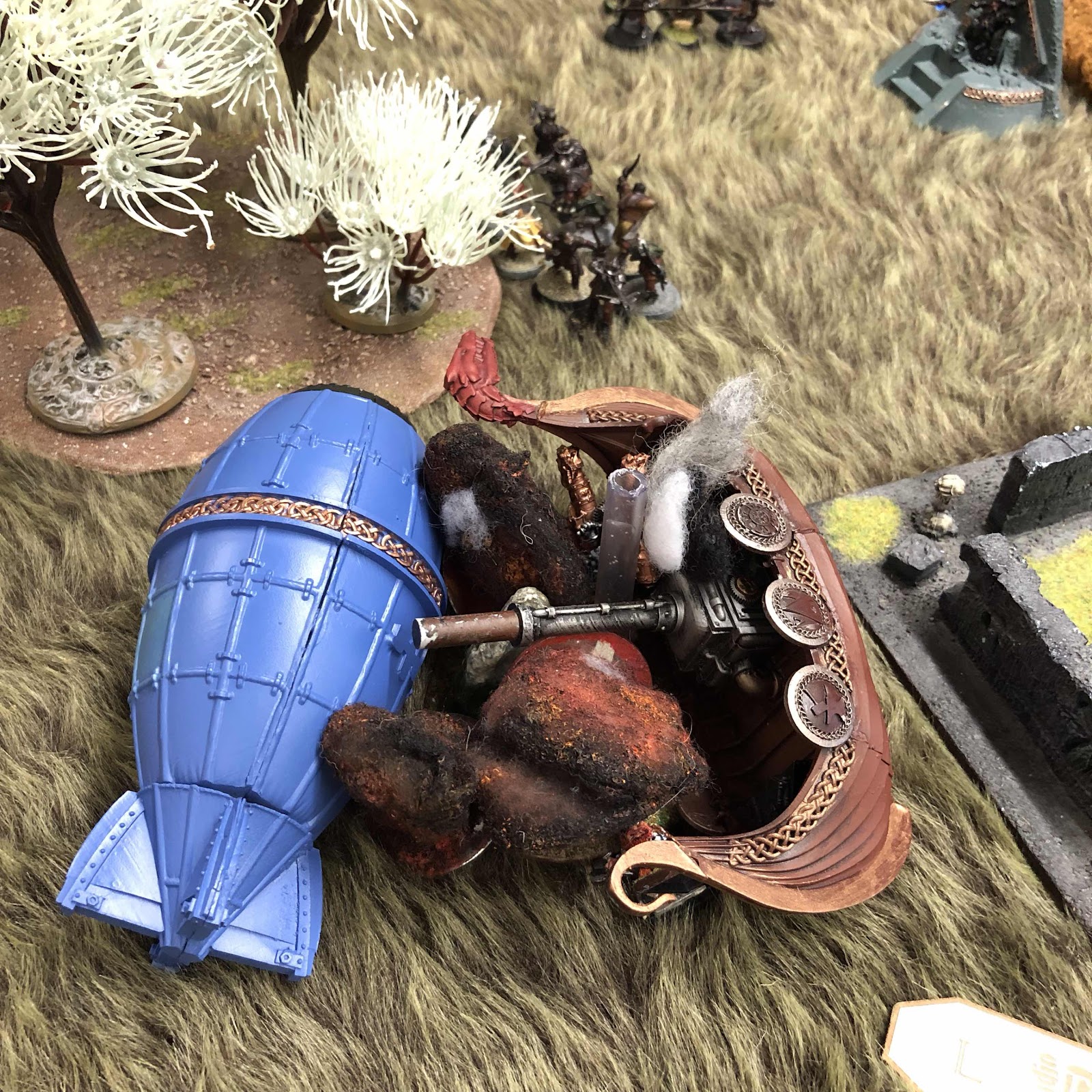 This is how it should be... 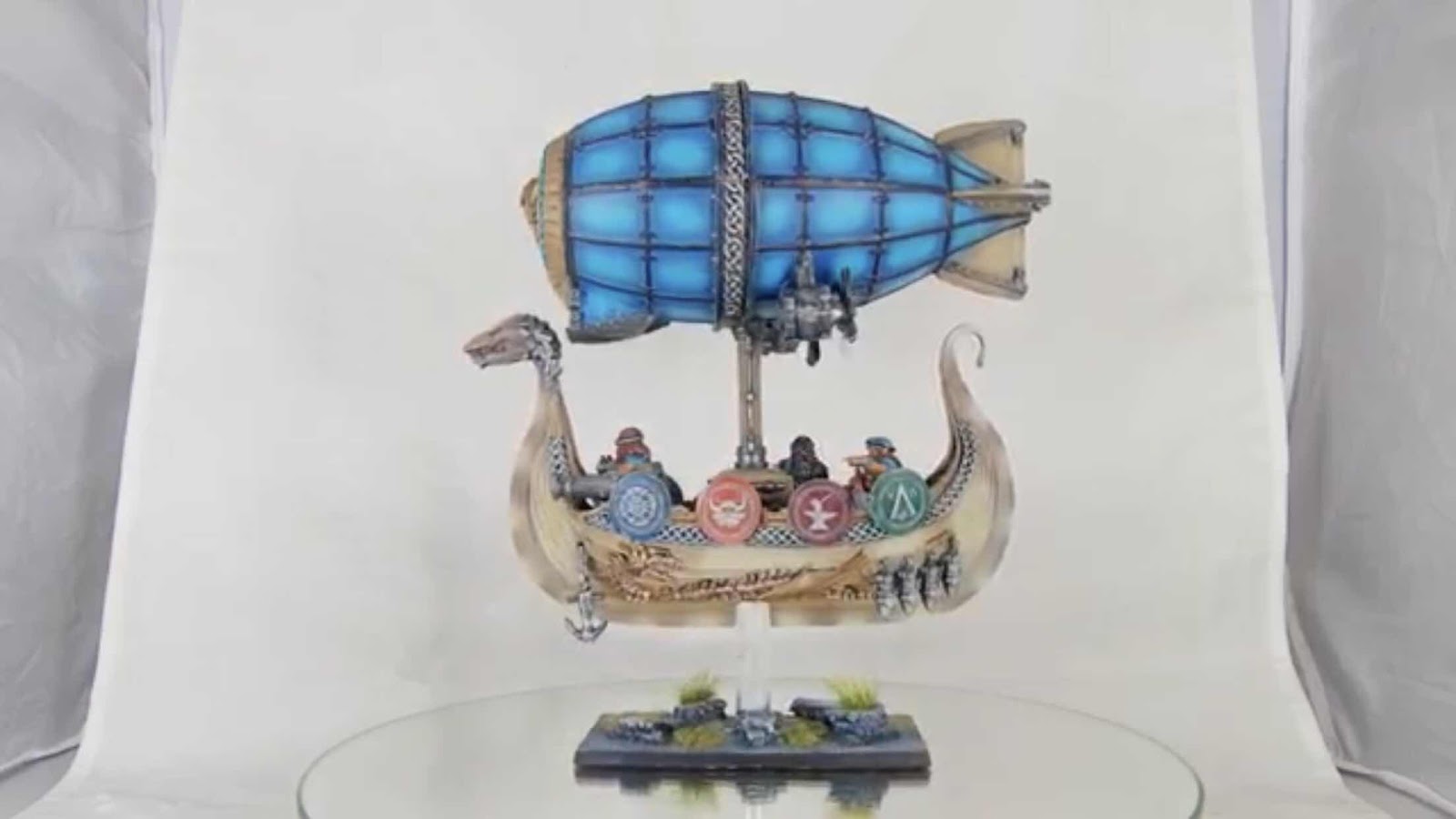 Issues with the model

So I got it from a Kickstarter (well late of course). As I started to put the model together I realized following issues with it:

1) several parts in the ship's hull didn't really fir into one another,
I had use a lot of green stuff  to fill in,
2) It was totally missing the dragon decoration showing in the side on the above pic
3) Parts in the balloon were even worse in fitting. Most annoying thing was, as you can see from the picture below, that some of the parts were so blatantly flawed / destroyed by filing 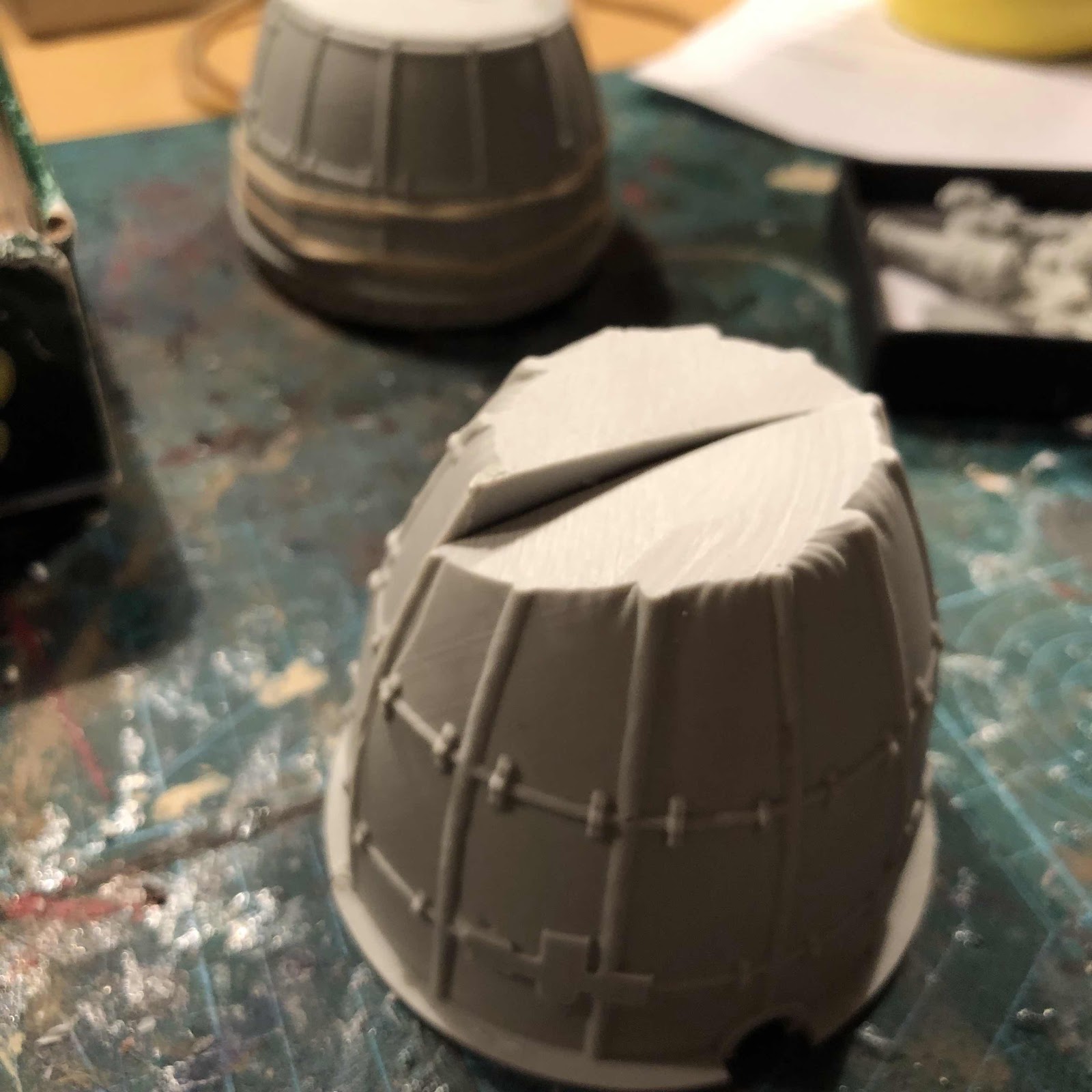 So Norba Miniatures had really failed in their quality control, shame on them!

Situation only got worse when I wrote to them asking for replacements for these flawed parts. First got pretty vague answers on their schedule to send replacement, then after a month's waiting (and several emails from me) they answered: "We don't have any spare parts, send the model back (with my own expense) to receive a refund on the model"! I asked several times for another form of compensation, as I certainly didn't want to return the model (I had started painting it etc.). They wouldn't change their approach. Very disappointed on their customer service! First it took them a month to realize they don't have spare parts and then no options for compensating for a flawed product.  I will certainly not be buying anything from these gits again! Unfortunately it seems quite a typical for Spanish miniature companies to produce this winning combo of bad quality and an awful customer service...