The Others - Fan made ASOIAF faction reviewed

Is Death too powerful? 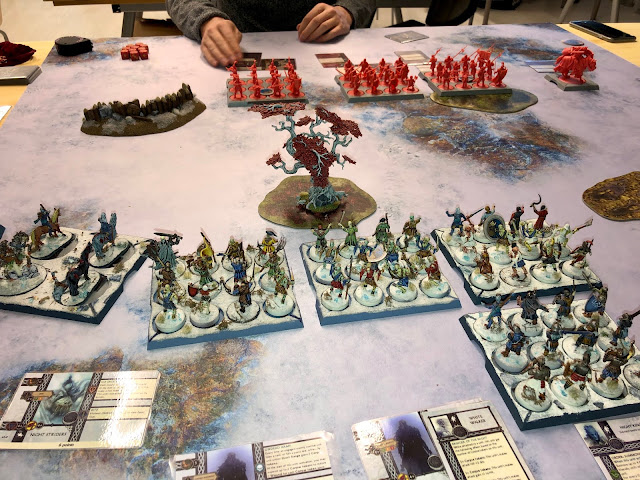 So, I've been building (link to Project page) and painting an army for the fan made Others -faction for my current favourite game: Song of Ice and Fire - Tabletop Miniatures Game . I've now played 4 games with it and a talk on "On the Table" podcast & Chase is agreed. It's time to sum up a review of the faction and it's units. Read on!

Faction as a whole

As a fan made faction and rules, The Others are surprisingly well designed and do work! What is best is that it really well captures "the fluff" of the Others faction, great work indeed!

Based on my experience, the Others are probably a little bit too powerful in a hands of an experienced ASOIAF TMG player (yes, I'm calling myself that with 26 games under my belt). I'll list my findings on their strengths and weaknesses below, but I guess the one underlining point is, that a 4 point, insignificant unit (basic Wraiths) with a morale 4 is a bit too good. One can fill the battle line with these cheap and expendable units (and they can actually do damage, especially with some corpse tokens on them), while having couple more better units swinging from the flanks or holding objectives for points. 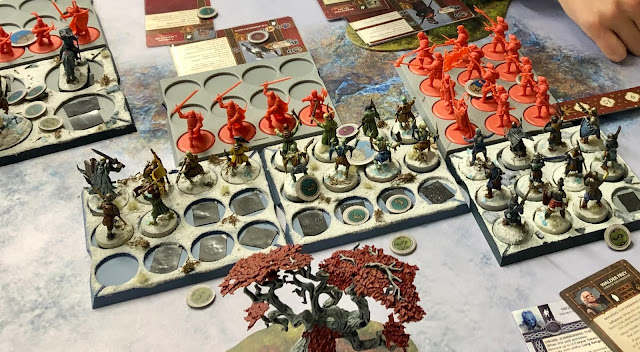 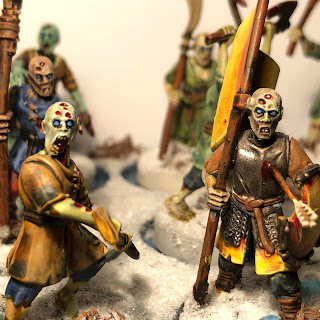 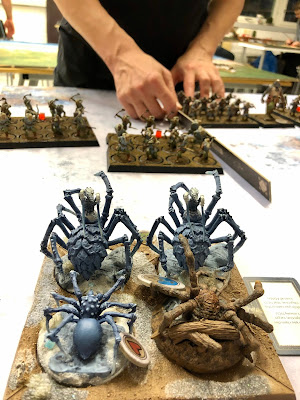 Night striders are fast and have Vicious 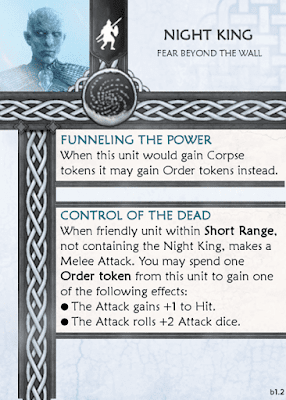 I've only played this varian once and didn't get a single Order token for him, hence I couldn't use 2 of his tactics cards at all. Spear of Winter is pretty good. Need more games with this one, but at the moment not my favourite commander 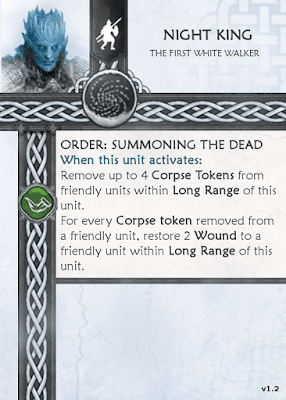 The other variant of Night King. This one is better or at least easier to use; straight forward and powerful healing ability, which is always handy. Good and versatile tactics cards providing protection, corpse tokens and token delivery. "Touch of the Night" -cards needs clarification - are the effects cumulative? If yes, very powerful! This commander provides exactly what our fragile army needs! 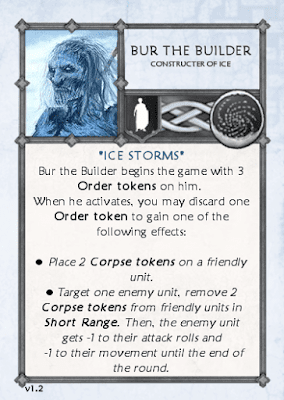 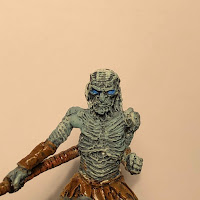 Bur is good too. First of all, he is a NCU commander and this faction does not have too many NCUs, secondly he can deliver Corpse tokens, which are needed very much to make this army shine. "Grumkins and Snarks" is a very powerful tactics card (D3+1 hits / wounds on an enemy unit anywhere in the battlefield), the other too not so. 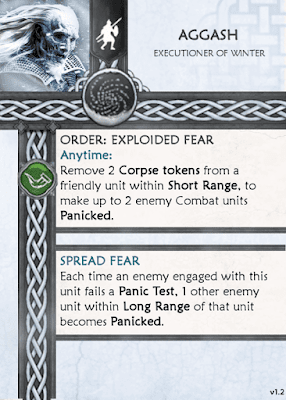 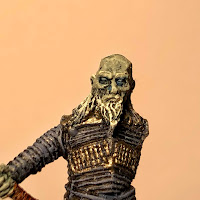 Aggash seems to be all about panic. I've yet to play him, so not much to say now. 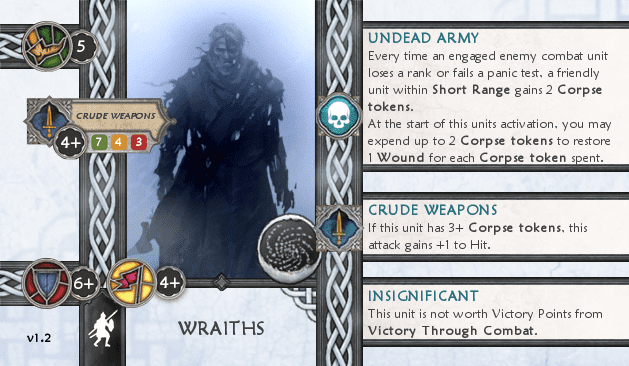 Cheap (4p.) but solid enough INSIGNIFICANT basic unit. Yes, they melt away with armour 6+, but won't probably be wiped out, because they probably don't take any damage for morale (4+) and then you heal them. Give them  3 corpse token and they start hitting things (with full ranks) or heal up with them. For four points I take several of these guys all day, every day. Battle line of them is your tar pit, that holds the enemy while your hard hitters move to flank. Give your commander behind this battle line to boost and heal. And you can summon two more of these units with your Tactics cards... them dead are restless! 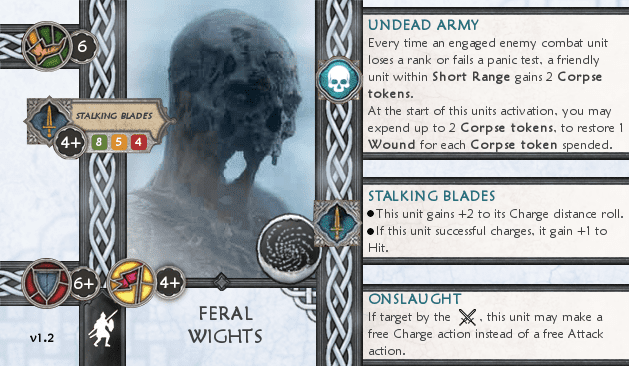 Extremely fast and dangerous on charge. I've killed giants with one go with these dudes. Here's your surprise superduper combo on first round: 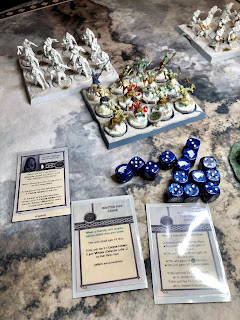 1. Give this unit 3 (or even 5) corpse tokens (with Night Queen for example)
2. On activation play "Blessings of the Great Other" tactics cards and get two effects (for example +1 to hit (hitting on 2+ on charge) or + 1 to movement if needed
3. Declare charge and play "Unstoppable Charge" tactics card, granting +2 automatic hits and auto roll of 6 for charge distance.
4. Charge 6"+6"+2" = 14 inches as your charge and hit your enemy with 8 rerollable 3+ hits.
5. Use crossed swords to charge again if you wiped out the first enemy 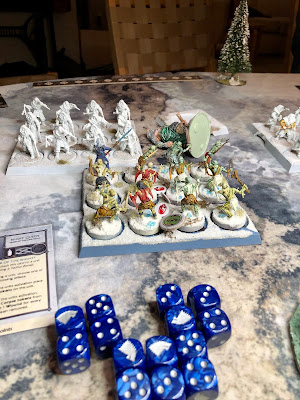 Fallen crows is one of your elite units at 6 points. They hit well (Crit blow!), save ok and really well protected against morale damage. Should we compare them to their living counterparts (NW Sworn Brothers), maybe these fellas should also cost 7 points. As a weakness, Fallen Crows are harder to heal. NK the First White Walker as a commander can fix this. 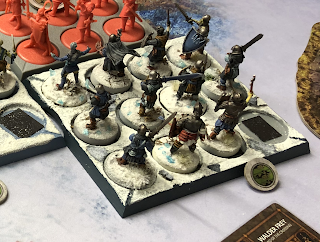 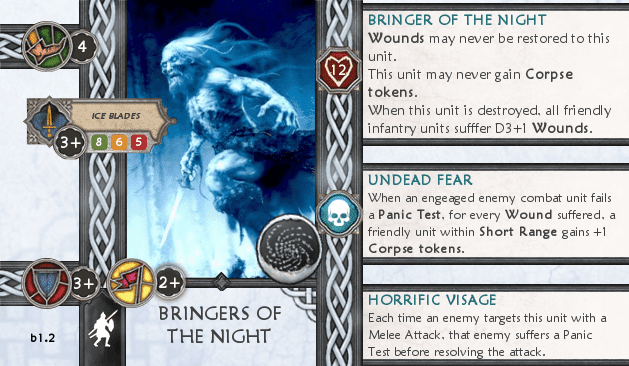 Bringers of the Night are your very tankym elite  commander bunker at 8 points, that scare your opponents and then hit hard. Almost impervious to morale damage... but, they can't be healed and losing them would be disastrous. Intuitively I'm not convinced, but I'm yet to try them. It is relevant for this faction to keep their commanders alive - 2 out of 4 commanders need to be alive to get utility out of their cards and tokens, so I guess these guys could serve that role. I think I would still prefer having my commander in Fallen Crows and behind my battle line. 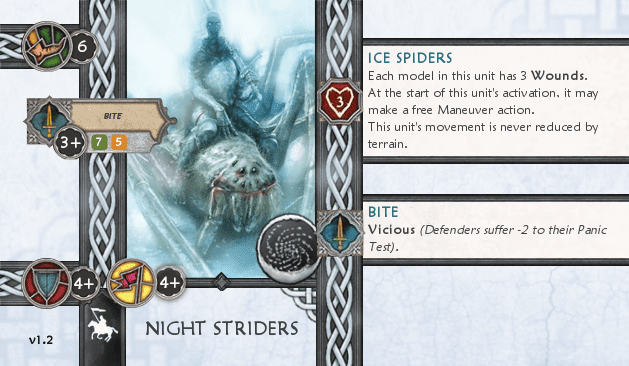 Ice Spiders from beyond the Wall! Fast (once again great combo with "Unstoppable Charge" TC and dealing -3 morale save when attacking from the flank (which fast cavalry should be able to do). They're also OK even on a prolonged fight, but I guess that's never an ideal situation for cavalry. 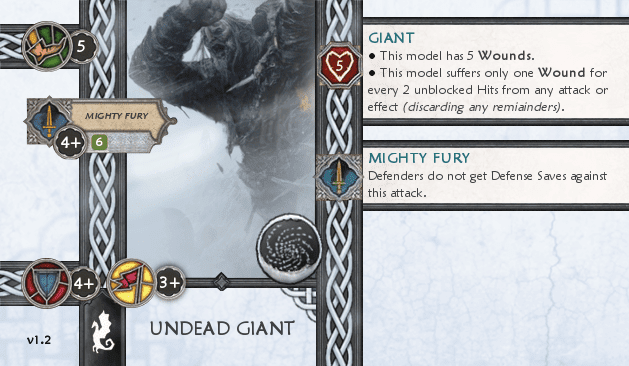 El Gigante! Pretty ok, but not as good as it's living cousins. Still a pretty solid choice at 6 points. 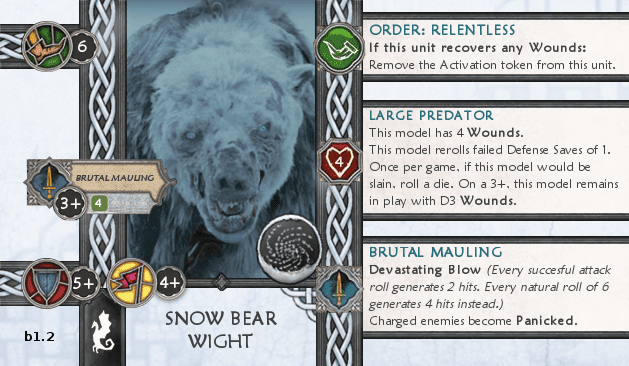 OK, Mr. Zombie Paddington is OP and totally so in 5 points. Give this one 2 extra attacks and roll a bunch of sixes on a charge and you wipe out units. Give it some corpse tokens and heal it (or with Money bags) and you do it twice in a round... We changed this to 6 points and changed Brutal Mauling to

With these changes, I would still take several of them, if I would want to really min max power play.
Counter play: FF Trappers, Meera & other assets, that deal auto wounds. Crossbows. 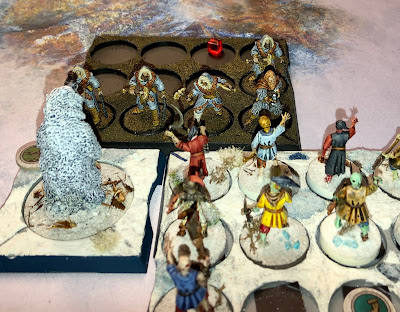 NCUs for this faction are pretty self explanatory.  Great to have 2 choices available with 3 points. Night Queen is also totally worth 4 points as you need the corpse tokens and she can deliver them even before you make contact with the enemy. Craster has one use abilities, just realized, that you can use him to heal the Nightbringers! Nigth Warg is also a very solid choice for three points. Then you also have Bur the Builder, he (or it!) is covered under Commanders above. 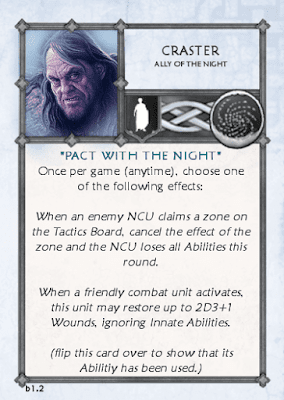 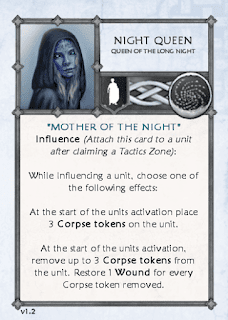 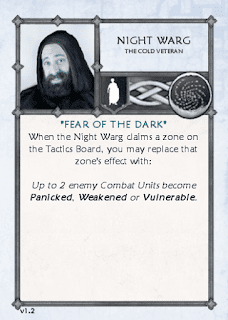 Here you can see two 40p. lists, that I used in a tournament I recently organized 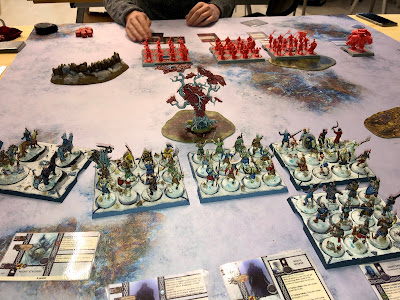