Mighty swings and burning to death! 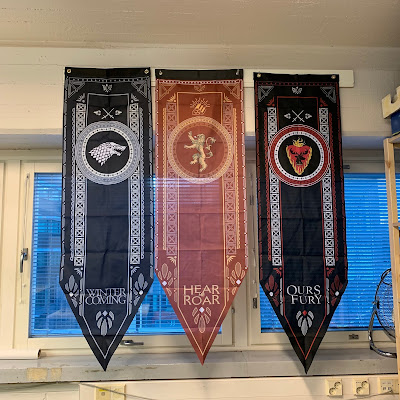 On the second Easter day a peculiar game was played in our War of the Five Kings Campaign.
Our Lannister player was leading the campaign after round 3 and I had already challenged and won him... but another player (Baratheon / Stannis) had used an Event to be able to challenge him too! Due to Covid-19 our Lannister player didn't want to play F2F and then again our Baratheon player doesn't want to use TTS... As I had a stake in this game (one with a greater victory against Lannisters would get to conquer first, I had won my battle with a 7 point victory margin), I offered my services as a mercenary. My offer was accepted and hence we set up this game. I just needed not to loose by more than 7 vp margin to take the lead in the campaign.

Mikko aka Stannis was the challenger and he chose this scenario and game size. Knowing this
in advance, I honed this "anti-Baratheon" list, tuned for the scenario too - marking any of these units, would make them quite terrifying!

My second NCU was Catelyn Stark.

If I would be able to win this or, as said not loose too much, I would have the privilege to conquer Lannister territory - especially King's Landing, which would lift me to the leading position (I'm playing Targaryens in the campaign)

Mikko deployed Baratheons in a solid line in the center and to right. I split my forces into two flank forces... 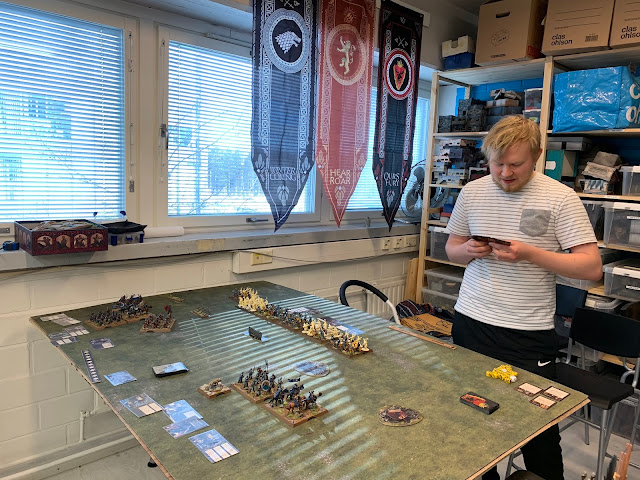 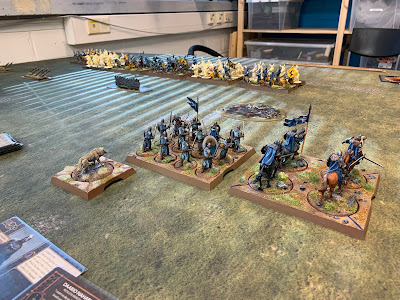 My left flank: Bowmen with Rodrik on the exreme left, then Outriders with Syrio
and Sworn Swords behind them and finally slow Great Axes in an advanced position 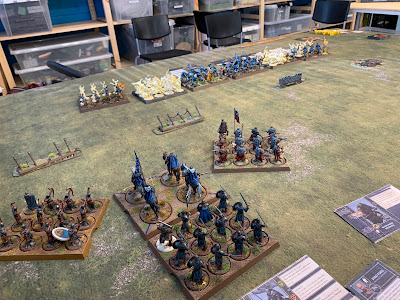 Mikko marked my bowmen (I thinked it was a mistake to give them 10 attacks) and the
unit of Sworn Swords with Daario. I marked a unit of Sentinels in his right flank and a Warden unit
somewhere in a middle of his battle line.

I chose to be the  first player and started the game BEFORE the first round by popping Arya's once per game ability and maneuvered Rodrik and the Bowmen 5" forward, they came within long range of two Baratheon units. As a first action I went for the letters for 2 more tactics cards and gave a panic token for them Baratheon Sentinels,  whom were a marked unit. After Mikko's activation (probably he took the pony) I activated Rodrik boys, as he activated he threw a vulnerable token AND a VP coin at the very same marked sentinel unit. Add to this Rodrik's Tactic Card "Press the advantage", I had built a perfect combo, where I had

This is what I rolled: 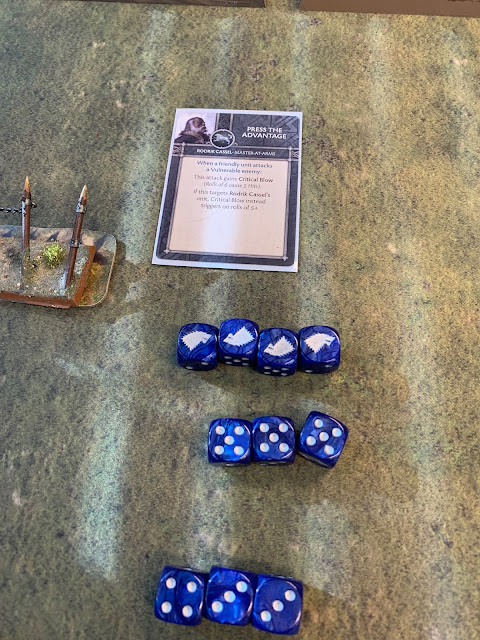 Boys and girls, that's 17 hits to a FLANK  of a vulnerable, save 4+ unit.
Sentinels were killed outright, even without using the vulnerable token!
This earned me 5 VP off the bat:

I was feeling very victorious (maybe a bit too much for my own good), but Mikko showed
his  Baratheon stalwartness and showed no sign of defeatism!

Instead, he played Melisandre, whom immediately grilled half of the Bowmen by killing three of his own men - Bowmen couldn't succeed in a -3 morale test!

Next heat seeking missile I sent in was Daario and the Sworn boys, another marked unit of mine; with their 12 rerollable attacks with 3+ to hit, crit blow (Stark fury) and Precision from Daario's order I expected to blow up another Sentinel unit. Unfortunately I only managed a one six and "only" killed eight of the enemy, while losing four men to SF and Daario's Reckless Attacks! 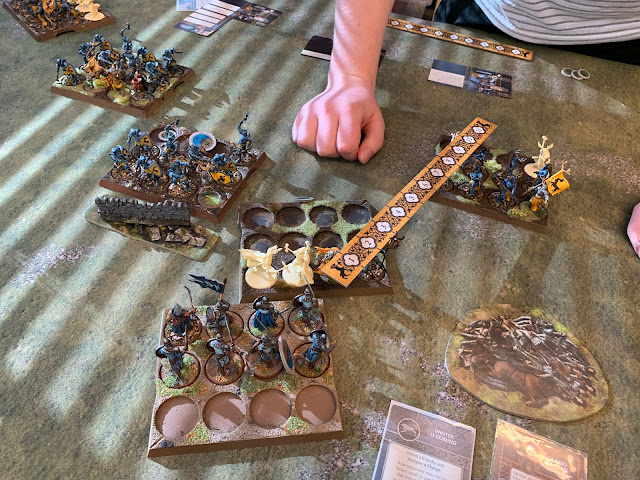 Stag knights then pulled of a  charge to my flank, but luckily failed to cause serious damage. With some Baratheon trickstery Sentinels healed two models... 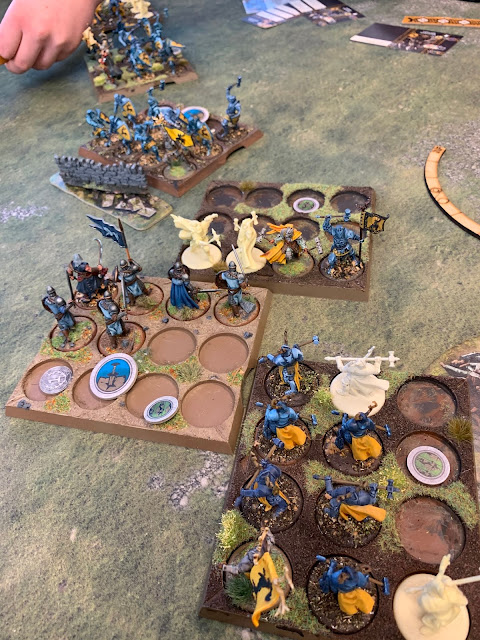 At the end of round 1 my left flank looked like this. I had a nice power advantage, but I was worried about my bowmen and Syrio and the Sworn boys were too behind. Baratheons seemed to have taken few steps back... 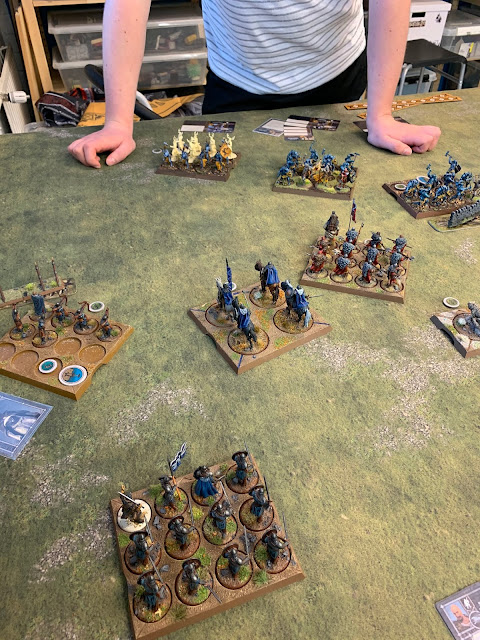 Round two - save Daario!

Round two started with Mikko naturally taking the Swords and his Stag Knights
pummeling a way at Daario and the Sworn boys. As that unit had gained an extra VP token too from Stannis, I really needed to get the hell out of that fight - so they retreated with the pony zone. As Mikko didn't follow up with a charge right away, I was able to move even further away with their activation, safe for now! 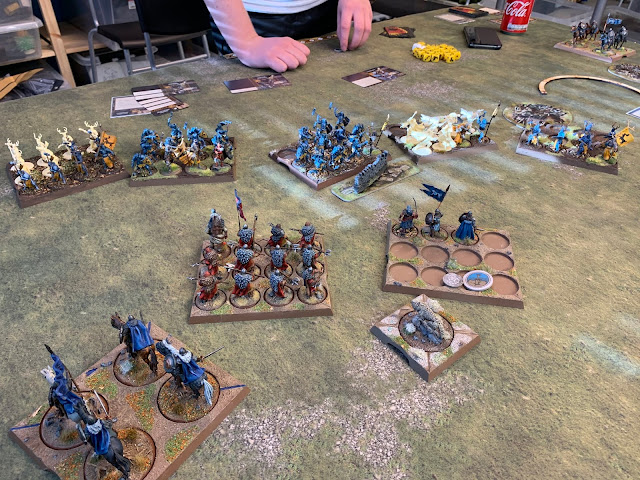 Instead of following Daario Mikko played Melisandre and once again killed three of his own men and wiped out Rodrik and the Bowmen! Darn, this gained Baratheons 3VP.

Then it was time to shift the gear to offensive again, as dreaded Umber Great Axes charged in, actually engaging two Baratheon units!  Almost half of Stannis' unit was killed, even if the GAs had a weaken token! Now Mikko started to look a bit worried. 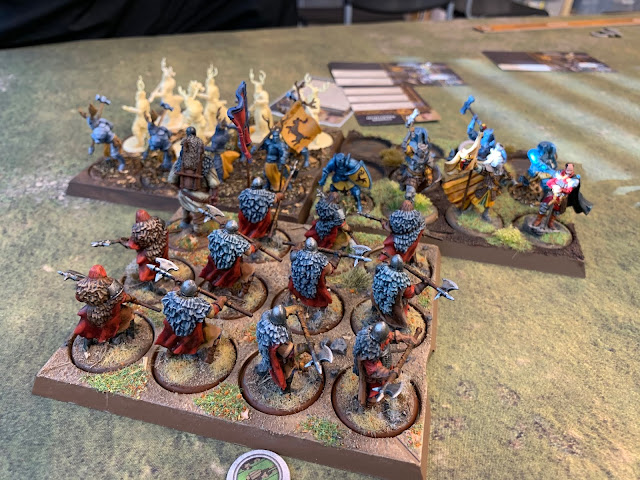 I had "North remembers" in my hand and charged Summer to the flank of marked Wardens. Summer caused a wound or two, but was then smited to wolf pulp by wardens. So the trap was sprung and I removed the activation token from my Great Axes, whom had been reduced to a last rank, giving them a crit blow. They were also influenced by Catelyn, giving them their max attacks. They duly proceeded to chop Stannis and his bodyguard Wardens to bits, huzzah! This was critical, as I had lost my commander too and could not hope to win, if Stannis would have been allowed to keep throwing out those additional VP coins at my units. Mikko probably played "Last Stand" or so, anyway, my GAs were soon killed, but they had done their job!

Daario's unit was also healead up 3 men, but I didn't feel safe, having seen what Melisandre could do!

To the bitter end!

In the meanwhile my right flank Outrider had charged Mikko's two unit's into the rear (Sentinels and Stag Knights), gritting their teeth they wanted to give time for their comrades in arms to overwhelm my enemy in the left flank...

So further charges from Starks followed! Both Otriders and Sworn Swords with Syrio got charges in; Syrio was far more effective than Daario: only one man lost to Stark Fury, but marked Warden unit redused to only two man (well they had some damage already)! 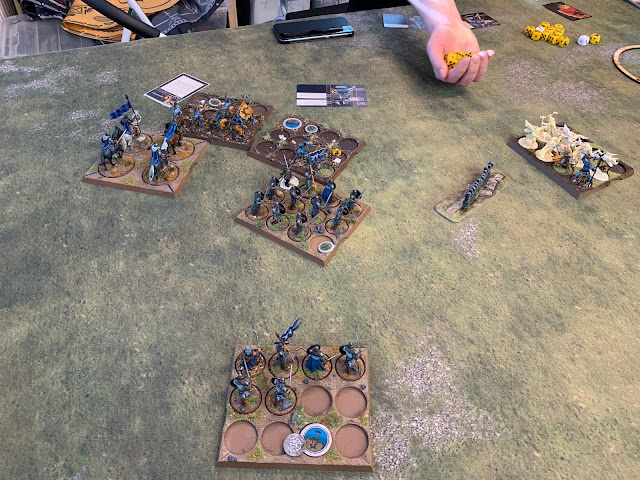 After quite a bit of grinding during the early rounds of the game, units now seemed to be dropping like flies! Melisandre proceeded to grill both Daario's (this gave Mikko a leap in VPs) and if I remember correctly also Syrio's unit. Before dying, my guys had been able to destroy his left flank completely.

In the end of Round 4. we both had just unit left on the table and points had climbed enough to
end  the game... 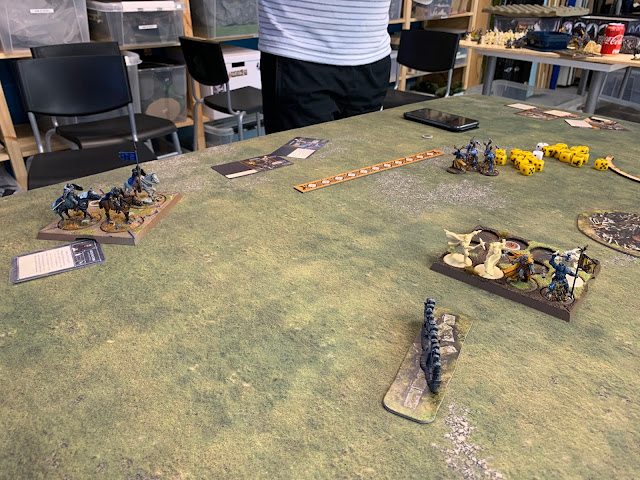 Mikko and his Baratheons had won 14-11
- what a slaughter by fire and steel! 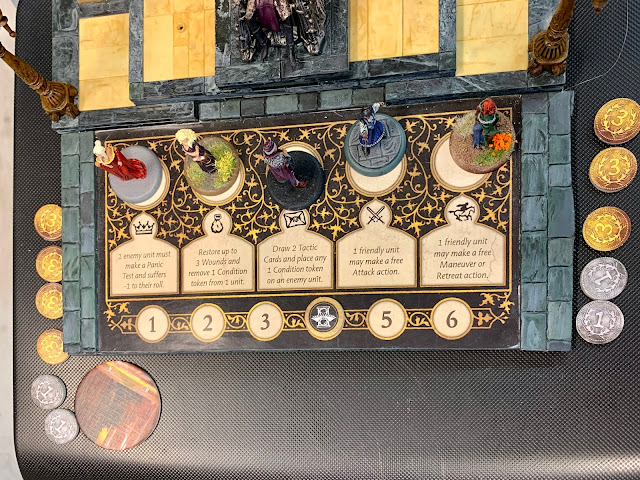 So why this result?

Well, I took a nice lead right from the beginning, maybe it gave me a bit too secure feeling about the game, also I was not aware enough of Melisandre's capabilities: 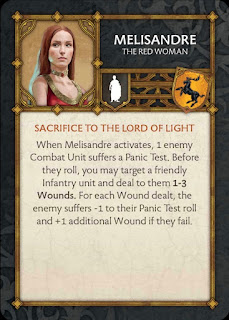 I would also have loved to get my key tactics cards to my hand... now all 4 best cards (that is Sudden charge and Swift advance) were in the bottom of my deck. 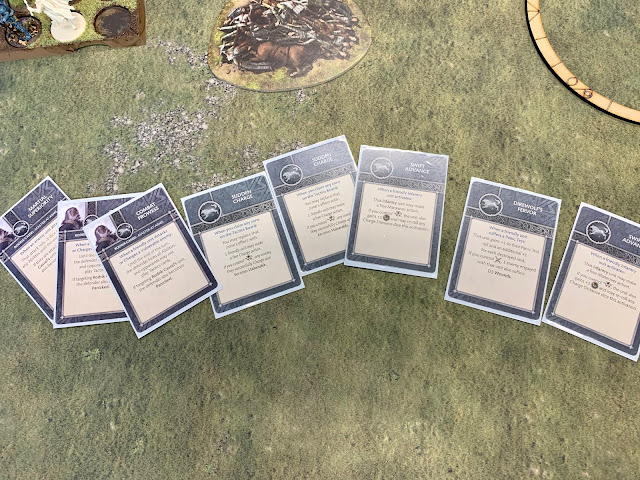 And of course Mikko played well and Baratheons are a tough nut to crack!

Impact to our campaign

Even if I lost the game, I had achieved my goal: I had won Lannisters with a higher margin and could claim their territories with priority - this gave me keys to King's Landing lifted me into the leading position of our campaign! Let's see if I can hold it... Herkko and his Lannister faction was quite decimated by this round, leaving him just two provinces. :-( 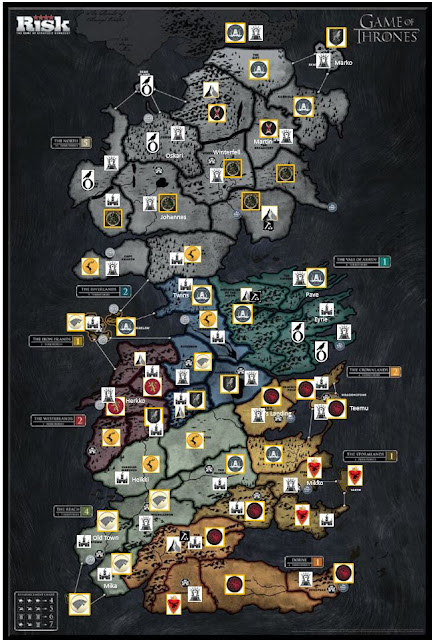 Thanks for  reading! You can follow our campaign here.