Making of NOT RUINED Greek buildings 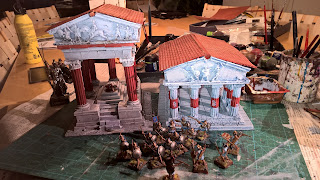 Our Mare Nostrum Campaign got me started on producing more terrain, mainly building for our games. This included putting together two resin temples from Scotia Grendel and upgrading one of them and an earlier production (Hirst blocks) with a roofs and fronts with reliefs.

I started by constructing three new facings for the buildings. Used the resin element from the Scotia Grendel -temple as a model. I cut the walls from the board with this insulation material between cardboard walls. Upper elements are plaster blocks from Hirs Arts . 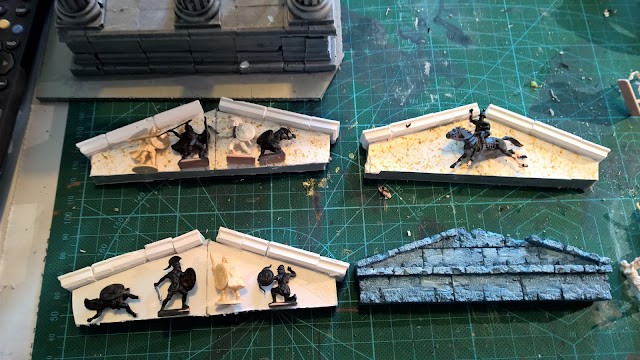 The models for reliefs are 20mm. plastic models from Zvedsda. 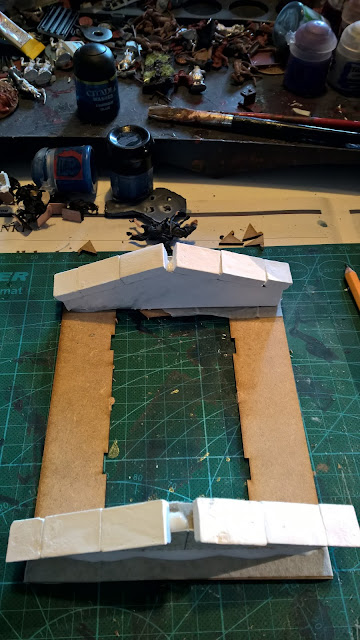 h
Then I started to construct structures for the roofs. Took the frames from the MDF-buildings
I had buildt - it's always a good idea to spare elemts , that you can use for scratch building (or as bases) and it's even bette when you actually use them!
Hirs Arts plaster blocks were used to fill the frame. 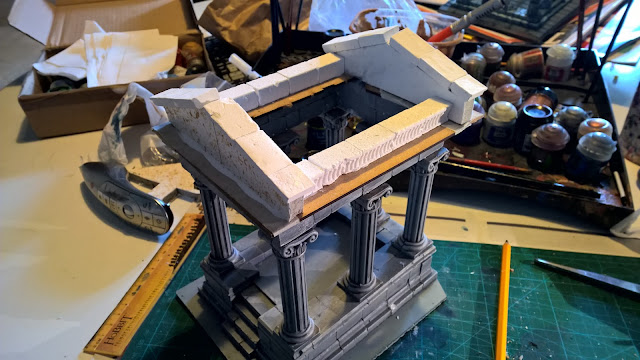 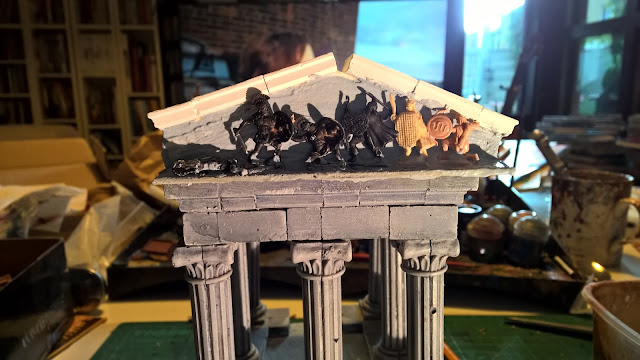 One of the best parts was to design the reliefs. Zvedzdas 20mm miniatures were excellent for the job.  I designed scenes describing Greek and Macedonian troops facing their classic adversaries
- the persians 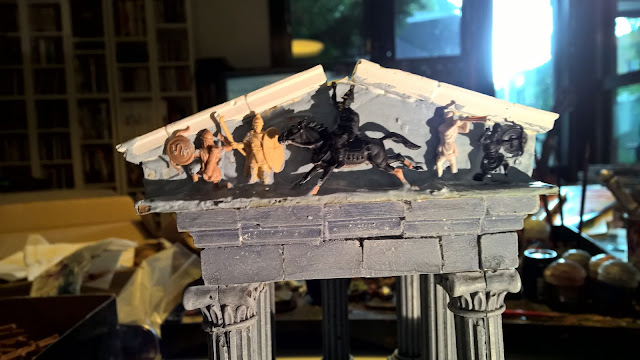 The walls were covered with a thick layer of stuff we use to create rough wall texture (PVA glue, joint filler and water) to make the models sink into it a bit. 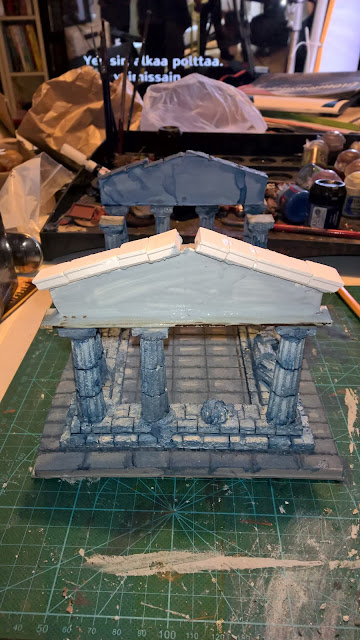 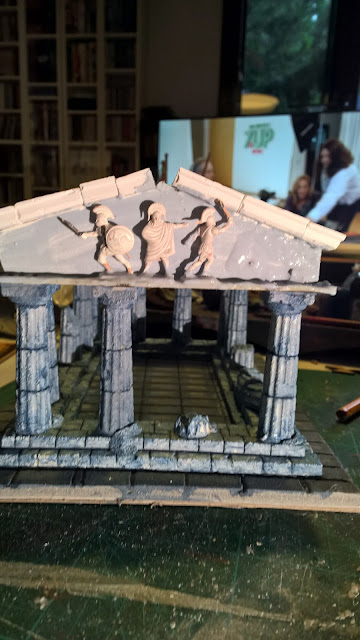 Then I started working on the temple and it's roof, 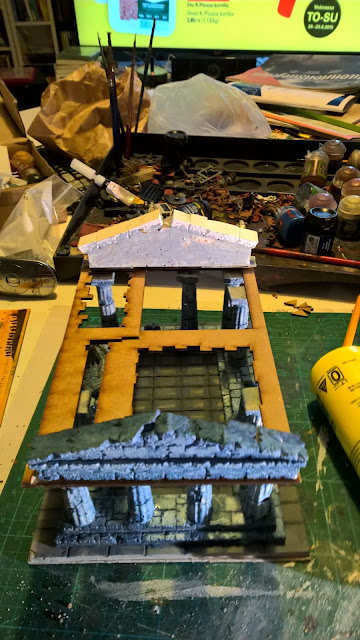 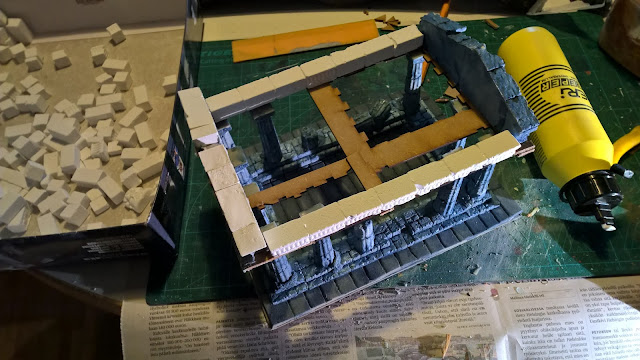 Then I sprayed the structures with light gray and started highlighting them with lighter shade. I wanted to keep the blueish hue on them - even if that is not historically or geologically correct. 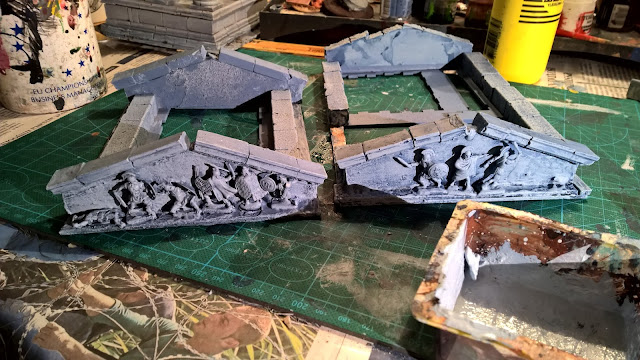 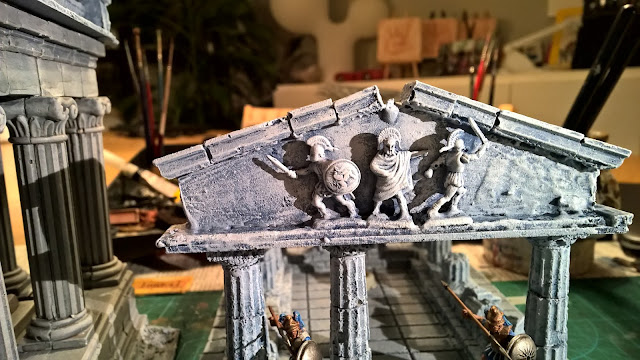 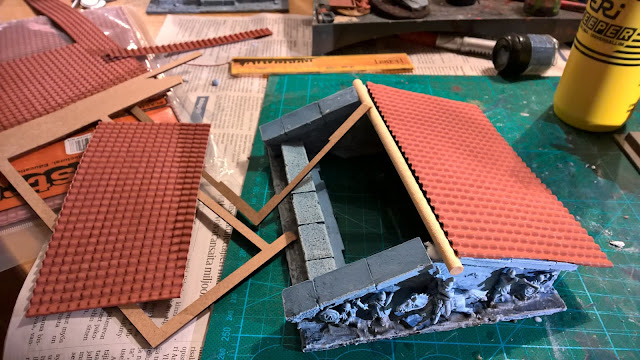 Roofs were constructed from Spanish tile -style roofs from Plaststruct and the same mdf frames and a wooden beam from an ice cream stick. 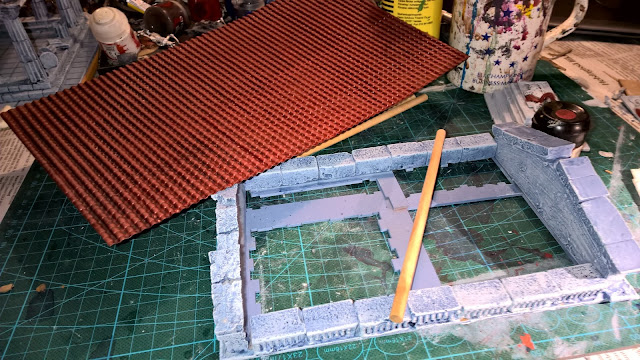 The roofs were sprayed with reddish terracotta, then washed with a mixture of red and brown ink and then drybrushed. 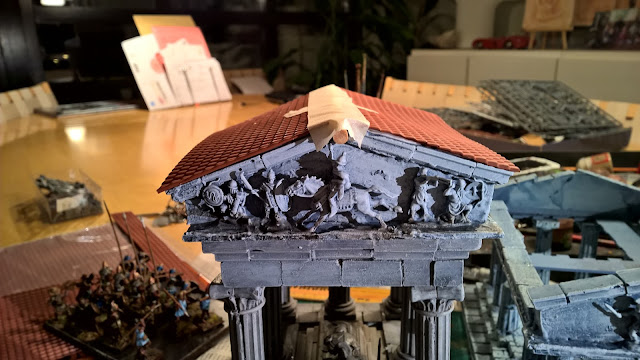 Testing it out. It was a bit tricky to get the roofs straight and some further mdf sheets were used to
fix any unbalance. 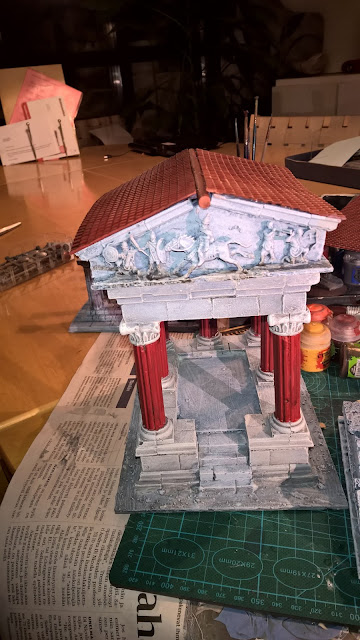 I had uploaded some WIP pictures to a FB-group for Hail Caesar in Finland and
I was asking opinions on should I paint the temples with some color as well - as Greeks did!
Encouraged by the feedback I added RED to pillars and highlighted them. I think this move really did the job! 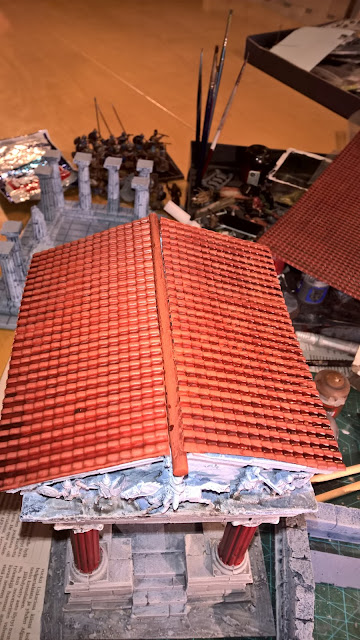 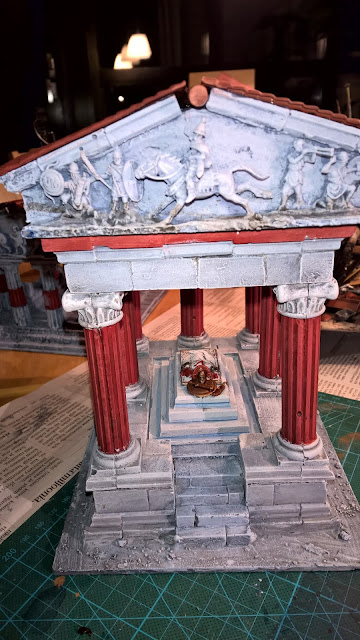 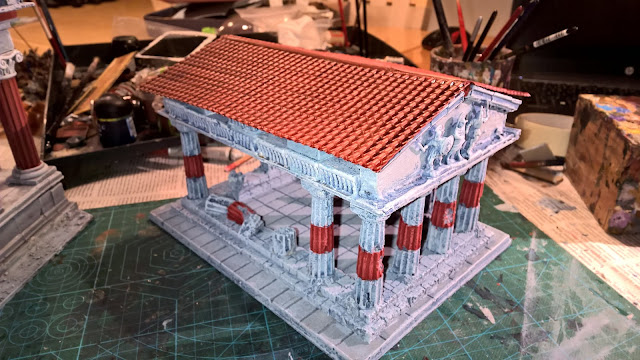 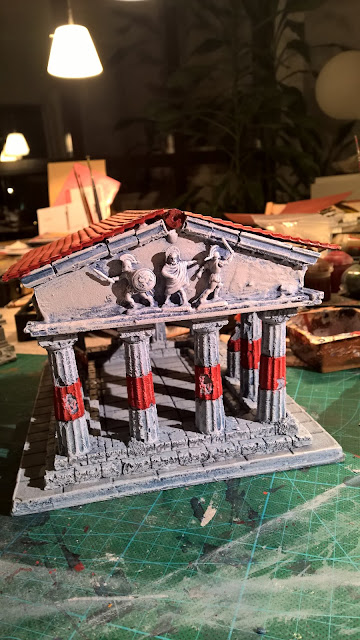 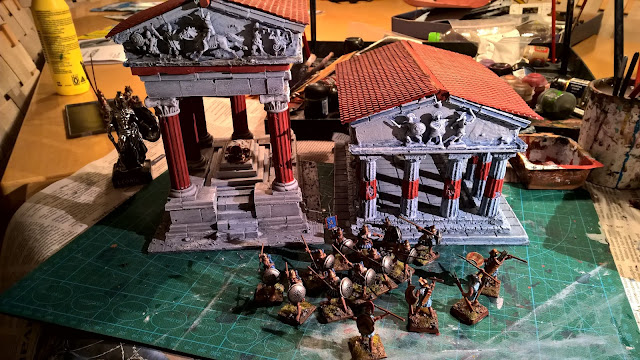 Naturally we needed something special to be held in this mighty temple... behold THE TOMB OF LEONIDAS: 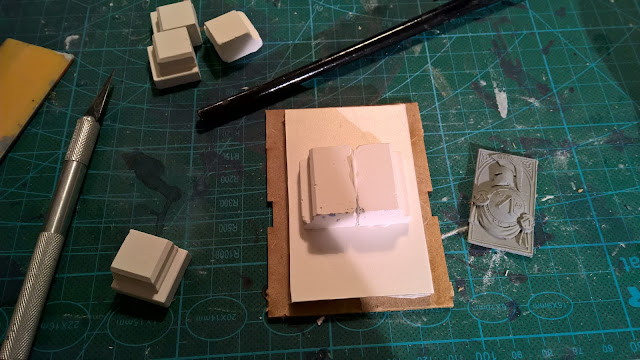 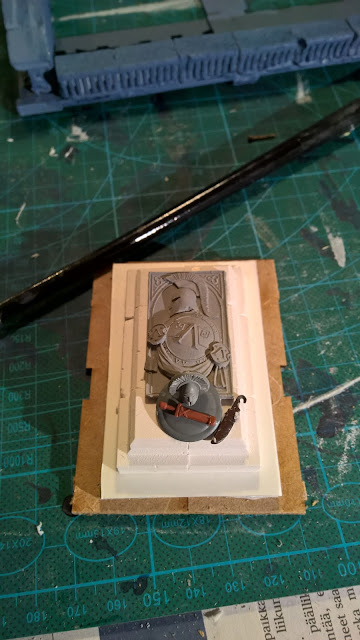 Plastic war gear added.
And fitting it into the tall temple. 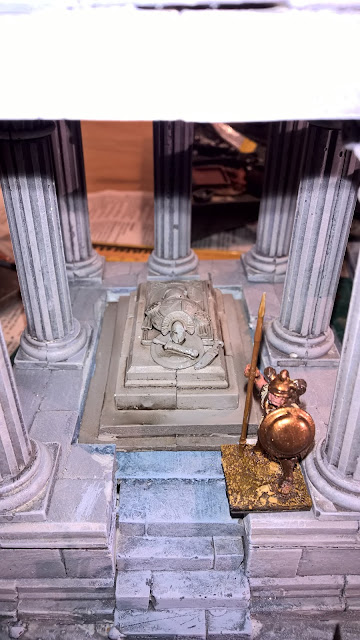 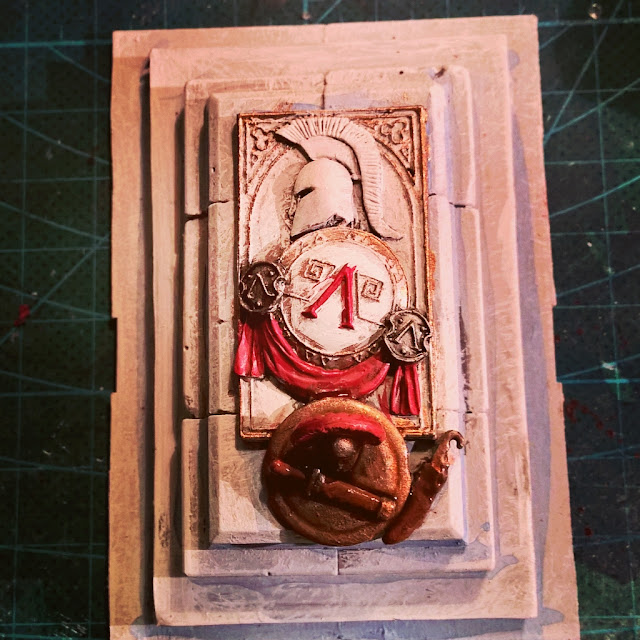 Almost done. The statue still needs to be painted. 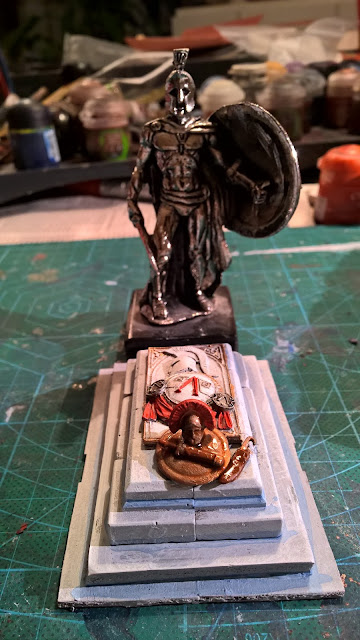