Yesterday evening Tom Bombadil and Goldberry helped the infamous four hobbits trying to escape from a terrible faith in the ghastly hands of Barrow Wights! 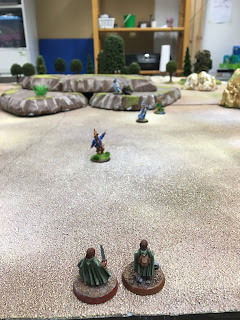 Read on to learn how it all went down...

The beginning of the game plays heavy on Wight's advantage and the hobbits are in trouble. As soon as they manage to summon Tom, things will start to look brighter (for example the mist disperses). Game was hosted and also played my friend and a fellow Tolkien / LOTR -fan Marko. Wight miniatures in this game are painted by Marko and hobbits (whom need some fine tuning), Tom Bombadil and Goldberry by me.

My set up: hobbits had to be placed in a zone 12" from the center line to the south and
min. 6" from one another. So I placed three hobbits in a row (Frodo in the middle)
next to the center line and poor Pippin had to stay a bit behind... 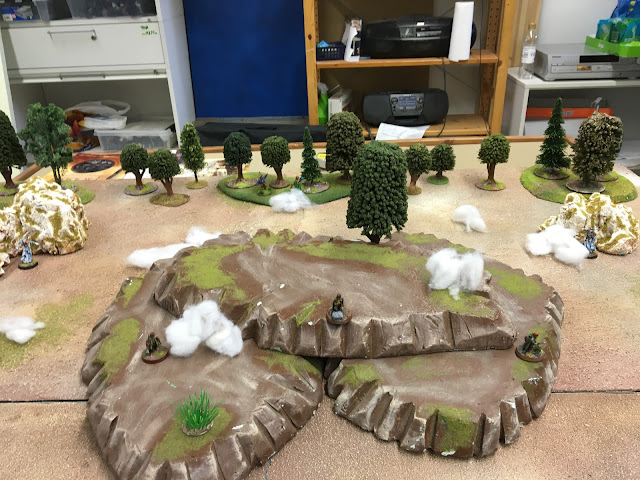 Of course poor Pippin, already positioned in a peril, rolled a 1 and he was too tempted
by the evil magic of the tombs... Marko was already laughing with an evil glee in his eyes! 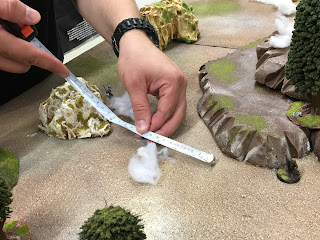 The closest Wight closed in on Pippin and... 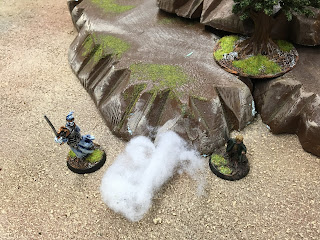 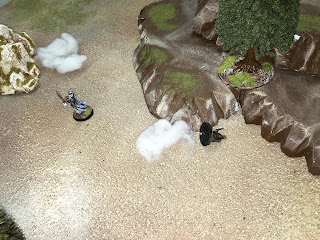 BUT AS WE KNOW, hobbits have more in them than meets the eye
and duly Pippin rolled a six (OK, I rolled) and jumped back to his feets! 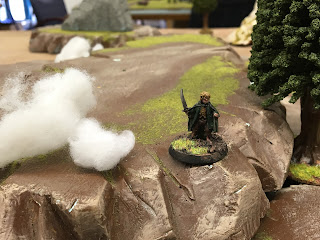 Close up on the brave lad 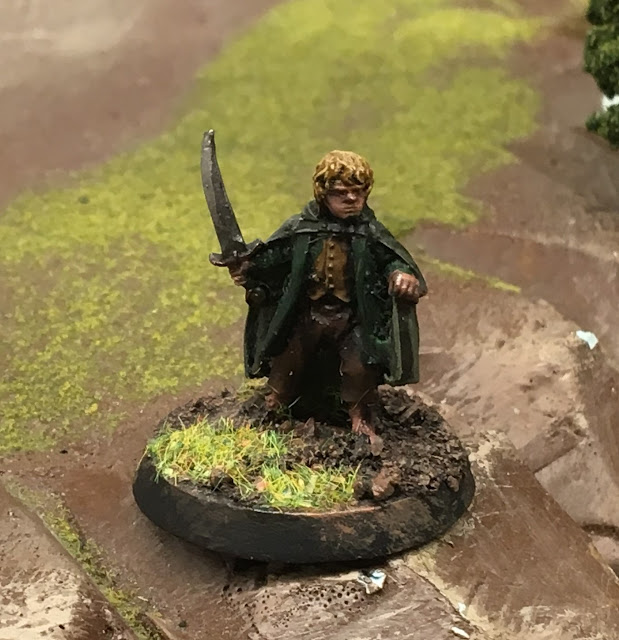 Unfortunately it felt like Pippin was only delaying the inevitable, as
another Wight joined in chasing him! 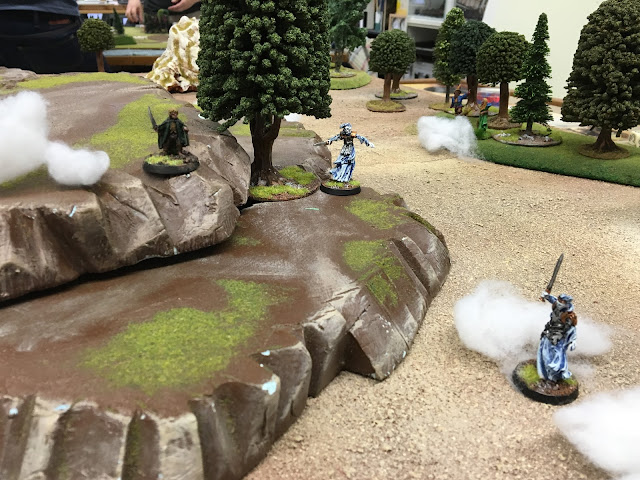 Over all situation after few rounds: Frodo, Sam and Merry are making good progress and
resisting evil magic, while Pippin still struggles to make his escape from two Wights right in his tail 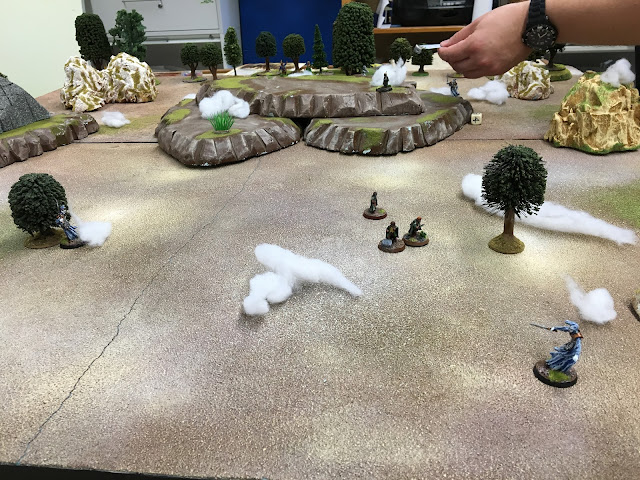 The inevitable happened and Pippin was paralyzed and
a Wight started drag him towards his doom... 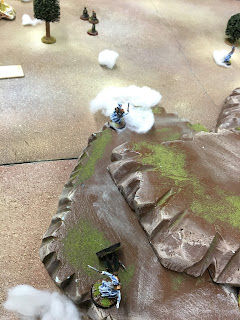 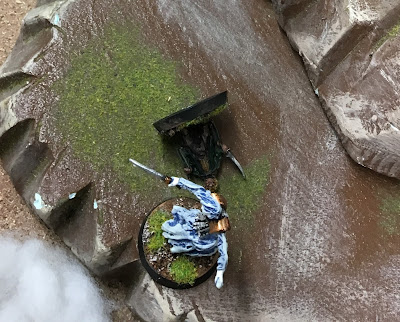 Further up in the north the two other Wrights were reluctant to show
themselves as that would start the Hobbits singing. Marko clearly had a plan to
finish poor Pippin off before Tom could interfere 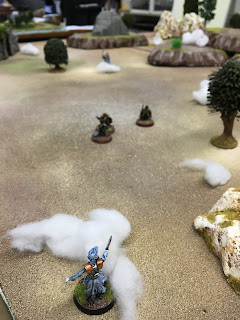 Keep it together lads! 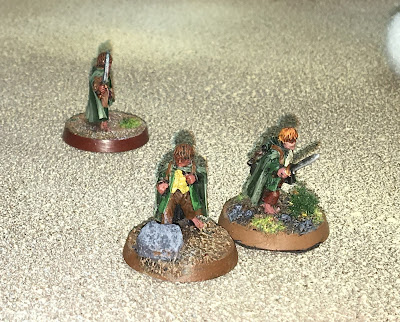 So after some tactical initiative rolls I managed to get a line of sight to
the Wights and hobbits started to sing for Tom:

And naturally I managed to roll a six!
And the mist disappeared!

Then Wights clearly decided to finally act with determination!
Soon both Sam and Merry were down with Magic and Merry was charged by a Wight.
Frodo could have escaped the field, but he's not that kind of hobbit, whom
leaves his friends in peril! Summoning his courage Frodo charged the Wight...
and managed to win the combat! Merry was saved for now! 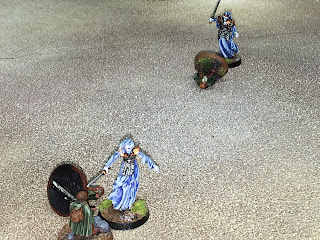 Tom danced to the table singing his banishment song:

Get out, you old wight! Vanish in the sunlight!
Shrivel like the cold mist, like the winds go wailing,
Out into the barren lands far beyond the mountains!
Come never here again! Leave your barrow empty!
Lost and forgotten be, darker than the darkness,
Where gates stand for ever shut, till the world is mended. 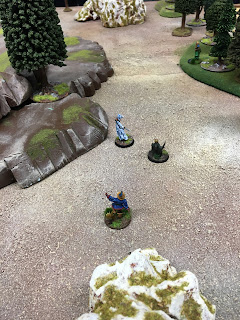 And in no time Pippin was released from evil magic and once again darted towards north! 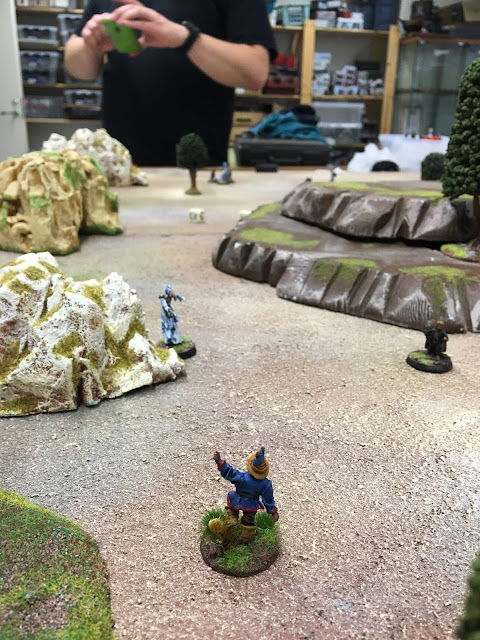 In the north 3 hobbits were struggling with 3 Wights... Frodo stood
his ground throwing rocks at Wights (hitting, but not killing). This gave Merry a chanse
to escape the field! 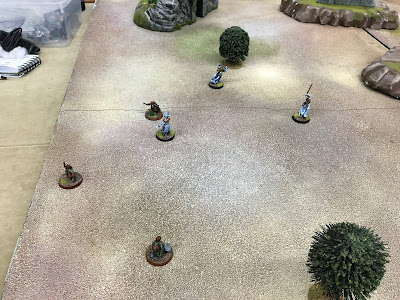 Finally things started to look good for Pippin as well, as beautiful Goldberry joined the fray! This magical couple could easily escort him to safety! 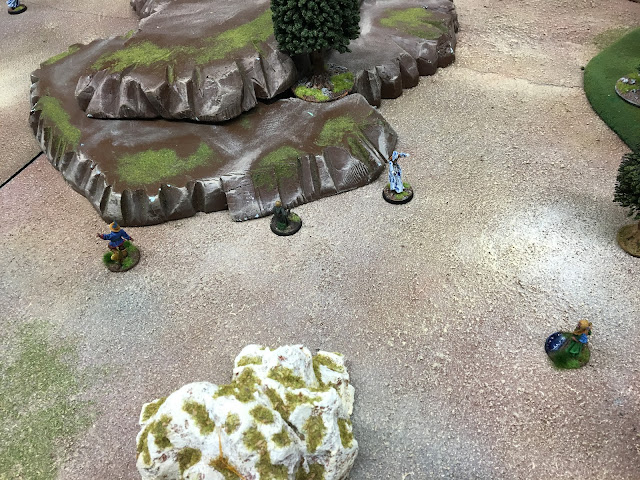 In the meanwhile brave Samvais had been dragged to a tomb, where he kept fighting
to keep his life! Tom dashed forward to save him, if only he could make it in time!!! 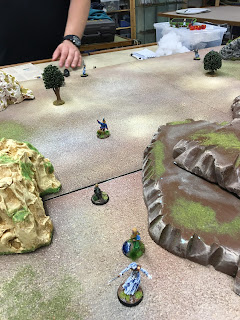 BUT NO!!! With a 4th strike the dark blade hit it's mark and Sam went limp in the cold, moist tomb... 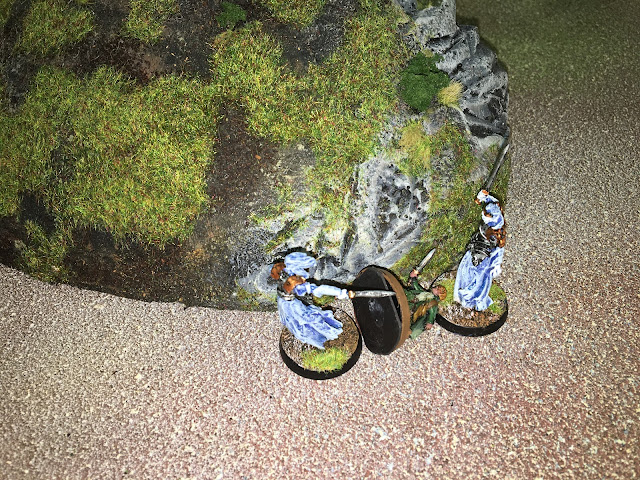 At this point we called it a game, Marko succumbed to the fact, that Tom & Goldberry could easily escort the final and third hobbit, Pippin, into safety. He then started another game with Kalle, who had arrived to the  club, this time Marko would be steering the hobbits... 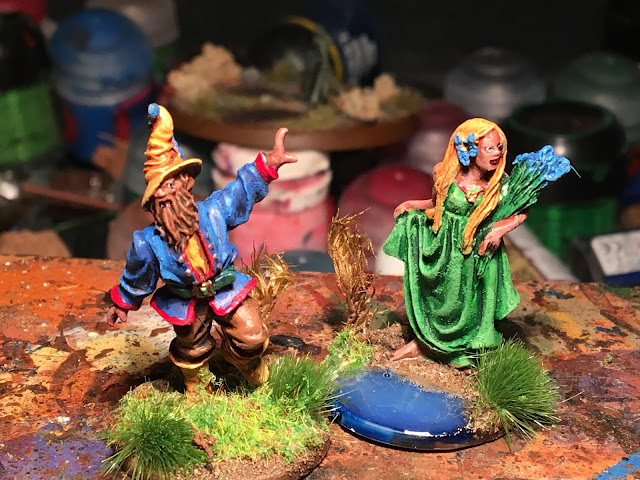