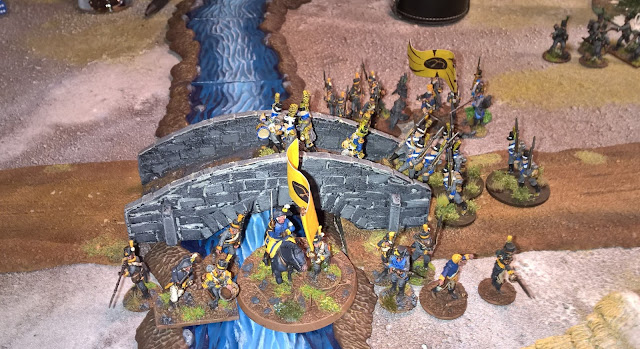 This time I joined Marko commanding the Russian frontal assault.

I had balanced the OOB's a bit: Russians had 35 points of troops vs. 30 points for Finns.
This time we also set clear goals for winning honor points:
* Russians would get 1p. / destroyed or routed Finnish unit
* Finns would get 1p. / each unit that escapes the battle field or is NOT captured by the end of the game. See what "captured" means from the first battle report for this same scenario.

Both Joonas and Ludde has really pulled their weight in joining the painting effort and produced a
unit of Finnish line infantry for the game: 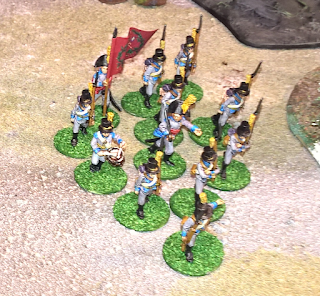 Nylanders from Ludde in the first pic, crossing the bridge.

Finnish battle line viewing the documentation in the horizon 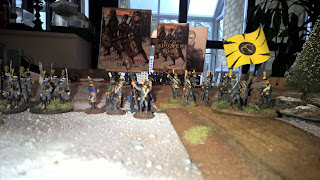 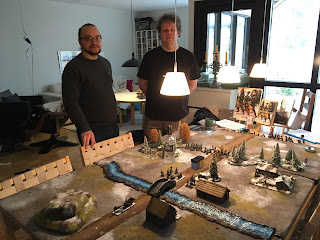 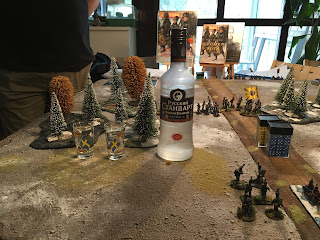 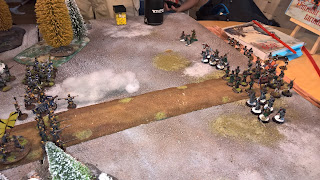 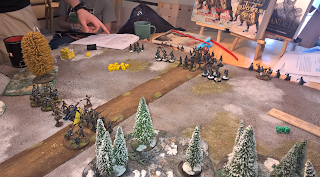 So the Finnish reinforcements have time to arrive 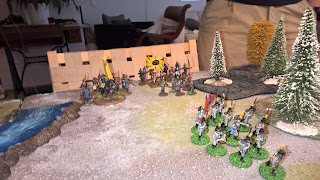 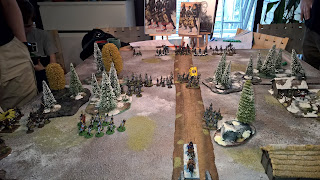 Santa and his little helper wondering the clamor of battle 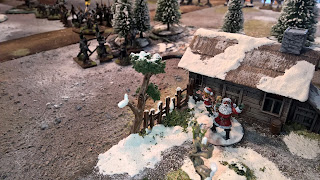 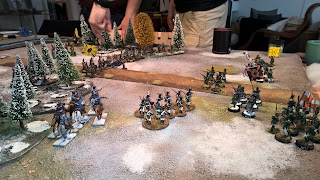 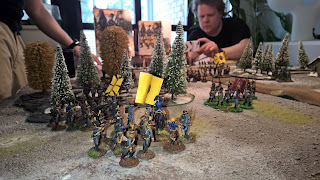 Finally an assault by Grodno hussars! 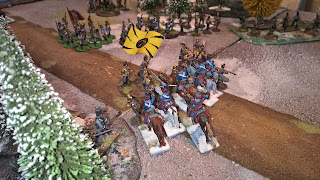 That end in a draw and the hussars pushed back, unfortunately
they are unsupported by the infantry, which is driven to wavering
by the shooting from Finnish jaegers and line infantry 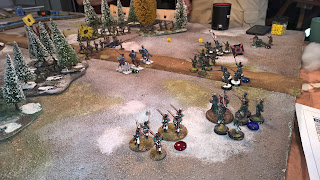 Soon the withering fire from the Finns has blunted the Russian attack!
My sly character decides it's time to save his own skin and commands
his unit to retreat from the field of battle - actually fulfilling his set challenge:
do not end up in melee and survive the battle unscathed! 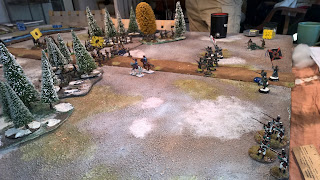 Russian reinforcements arrived via Yppäri stream, but they
soon realized, that the main assault had already failed... 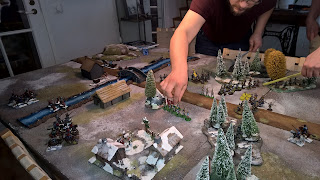 And the Finns under Commander von Essen (Joonas)
formed a solid firing line against them and to screen the not
so exhausted rearguard marching towards safety. 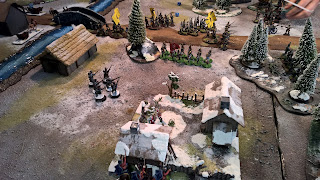 So Russian reinforcements moved on to looting Santa's cabin (not so historical)
- Ensign Trumpovich SCORING his set goal / challenge. 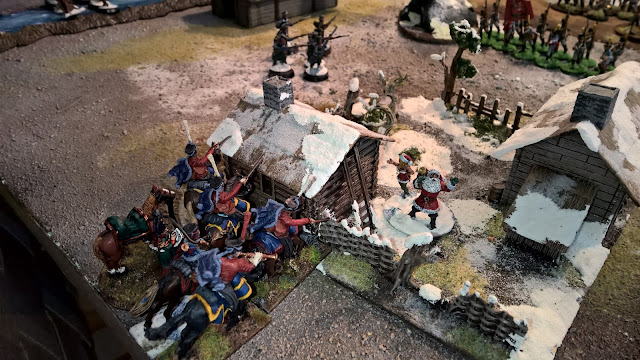 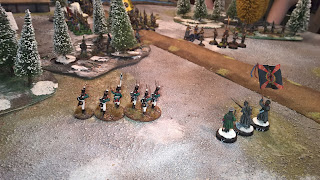 As the scenario allowed, Finns started to pull of their forces via the road 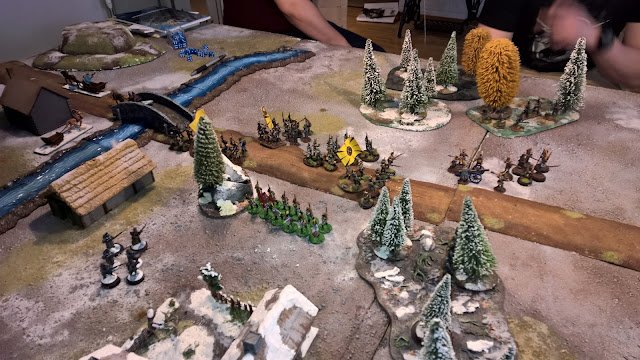 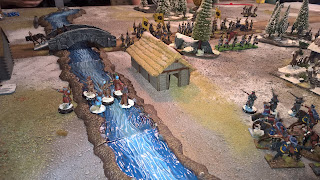 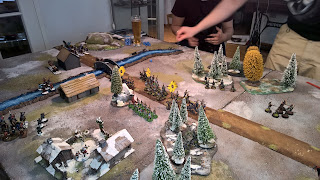 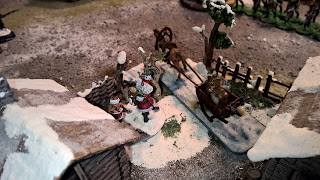 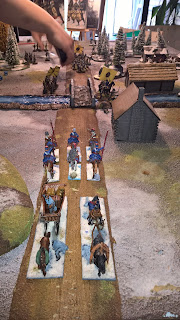 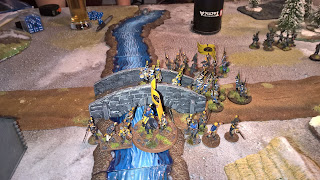 Hectic retreat to reach safety within the given time line 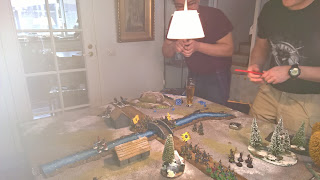 Cossack assault! Too little too late! 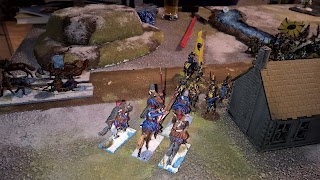 What is left from the frontal assault, total failure!
Nothing they can do to stop the Finnish rearguard from retreating... 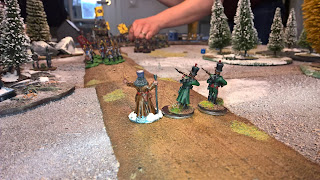 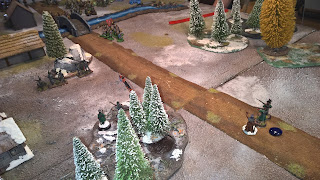 Even the cannon makes it across the river!
And AGAIN the Finns get the cavalry reinforcement
due to double six roll on command! 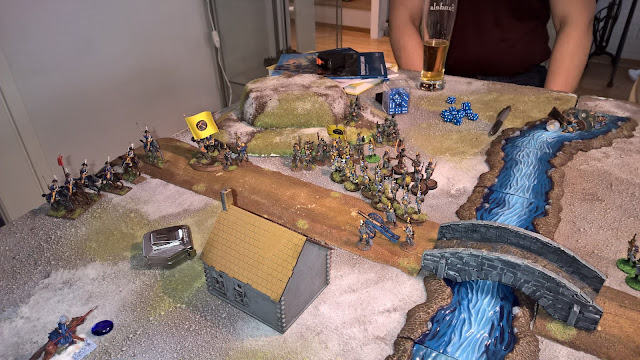