Since Hamburger Tactica, where I acquired the plastic Gripping beast box of late Romans and some metal blisters as well, I've been building up my 6 point late Roman Warband. So far I've played two games with them: 1 against Saxons played by Timo and one against Britons played by Sami. Below you'll find reports (WIP - first game done) from the games and my thoughts on how the roman board works.

Arthur (Foundry) and his elites 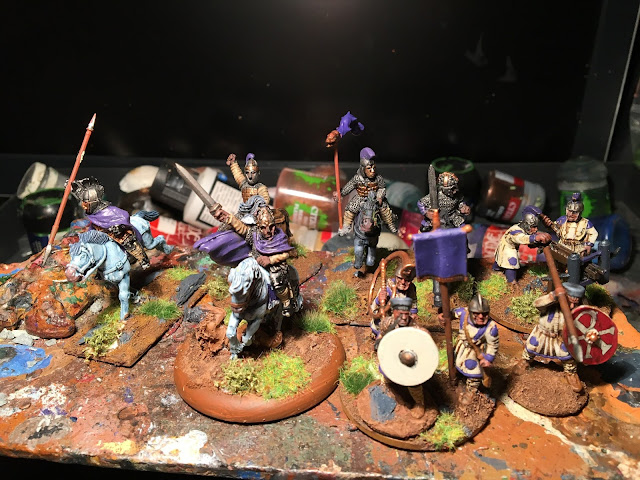 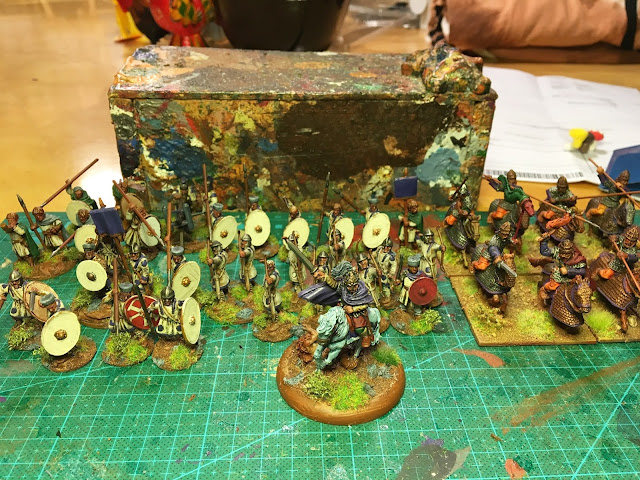 Actually the very first game I had was with Kalle already in Tactica.
It ended in a draw against Saxons. 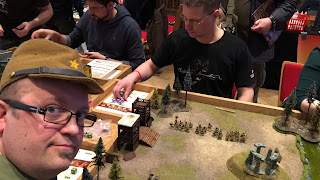 Scenario: Battle at the Fjord

I had introduced Saga to Timo and he had his second game with Saxons. Timo had two HG units (4 each) and 2 units of 8 warriors. I had 4 HG on horse, manuballista, 6 levies with shields (Armour 4), 10 warriors with bows, 6 warriors on foot.

I placed the manuballista on the hill, archers in the middle as close as possible to the river. 6 levies were also put up front to work as the a fatigue "donator" for the enemy. My warlord, HG and 6 warriors stayed a bit back as reserves. Timo hid one of his HG in the woods, the other was hanging out with the boss and the warrior units were pushed forward towards the crossing points.

My plan in short: shoot them up one unit at the time, sacrifice levies to fight whoever crosses the river to give the enemy fatigue and to take few of them with them to hell. My reserves mainly the WL and HG on horse back would then charge in and finish off enemy units, that had gotten through, but already had a few fatigues. I would wait before crossing the river as Saxons didn't bring any shooting along... 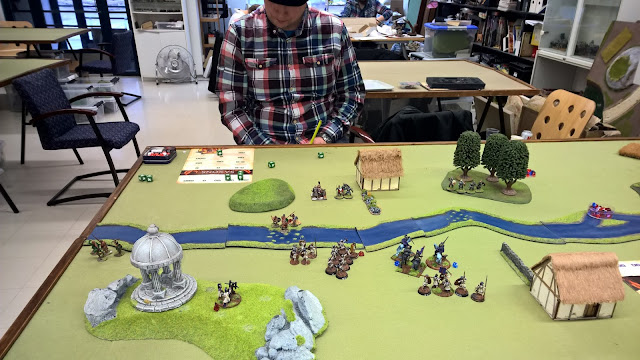 My first phase saw my shooting dwindling down Saxon warriors, this really enraged them and they charged my levies on the left hand crossing and dashed over the river on the right to charge my archers! Very aggressive indeed! Maybe a bit too aggressive... my levies used "ardor" and the Saxon warriors got their noses bloodied and retreated in chaos! Go levies with shields!
My archers went on to defensive mode, and due to Saxons having fatigue from their rush, only 2 archers were slain and as also two Saxons fell, they retreated after this humiliating draw... My warlord was watching with a grim smile on his face... 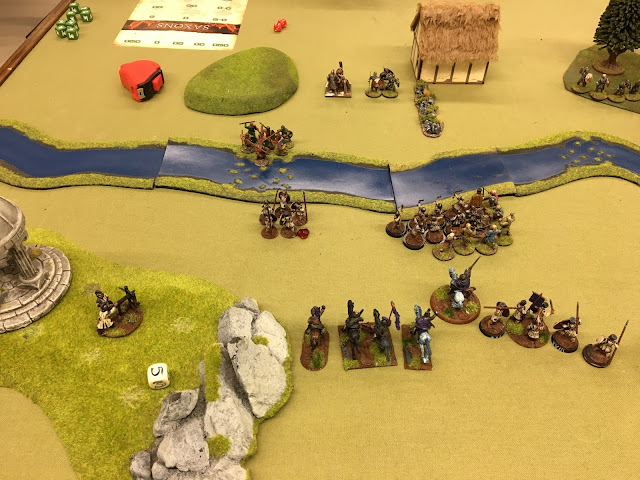 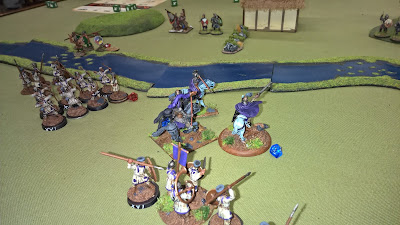 And then proceeded to make short work of those Saxon bastards, whom had been arrogantly way too confident in their headlong charge over the river!


Intimidated by my manuballista Timo started to consider attacking it with another daring dash... 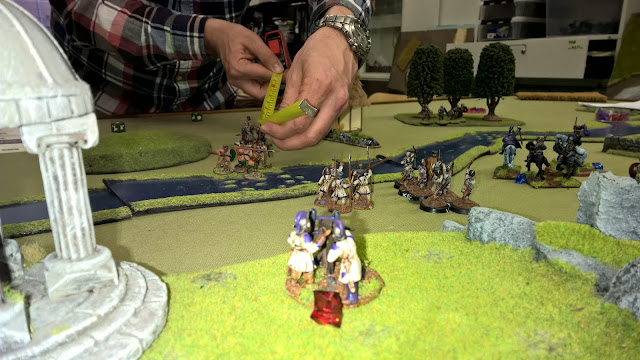 This time they were smart(?) enough to bring along their mighty warboss and some HG. Together they actually managed to slay my 5 levies - what a mighty deed! My levies actually took couple of HG with them!!! My shield levies had performed far better than I could have dreamed of! They really hindered the enemy and took lot of Saxons to grave with them! Beautiful with just a half point! Totally expendable! Totally worth the 1/2 point! 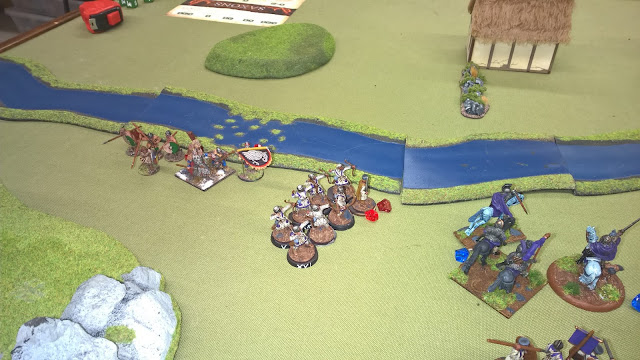 Retaliation was again imminent as the last HG's were shot by my archers and my HG cavalry decimated the remaining warriors donating more fatigue to the Saxon WL. 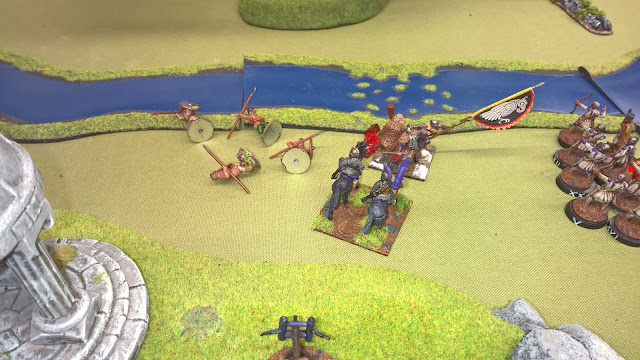 Then a combo from the Roman BB worked beautifully: 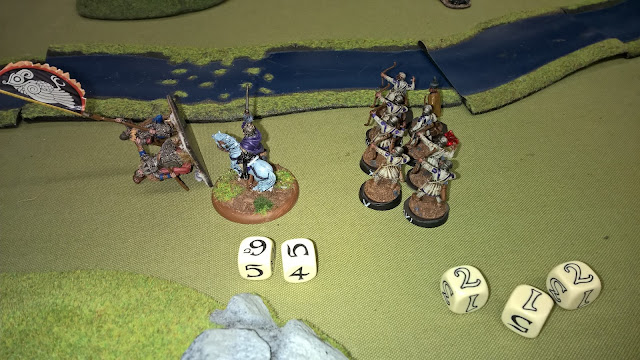 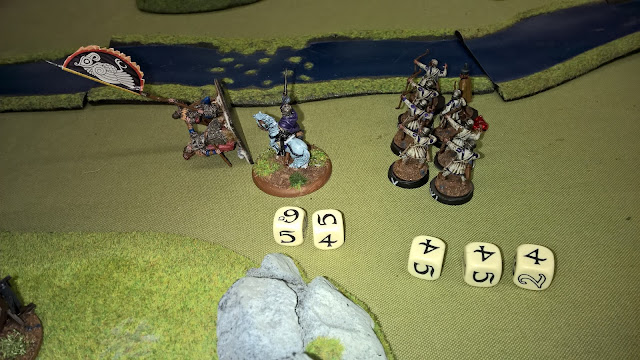 After this the Saxons conceded the battle. 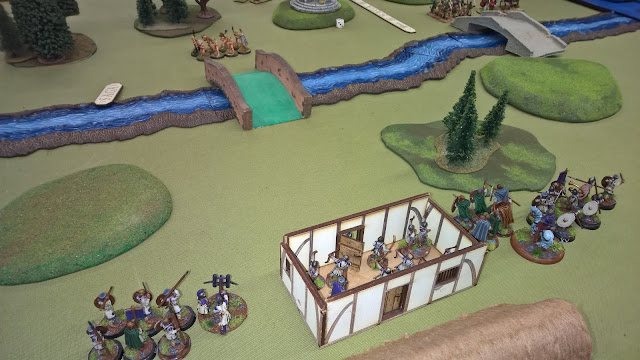 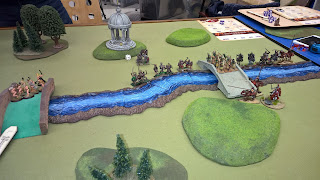 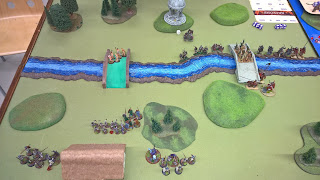 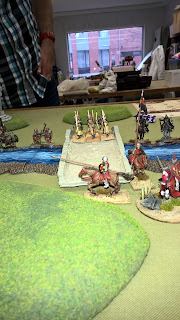 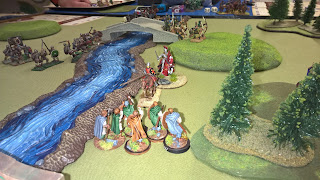 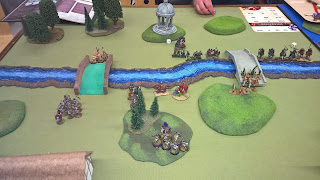 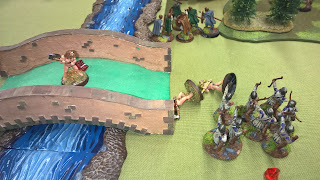 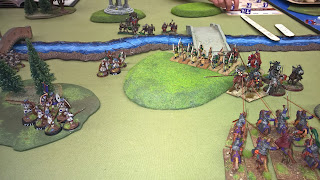 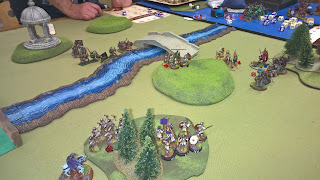 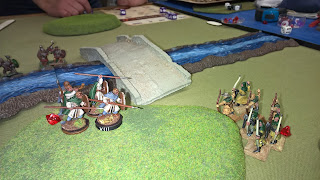 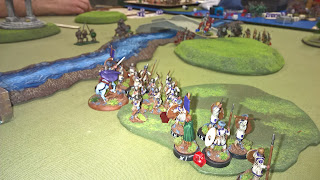 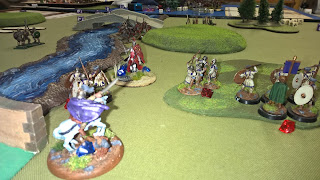 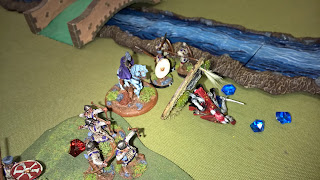 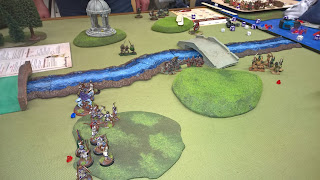