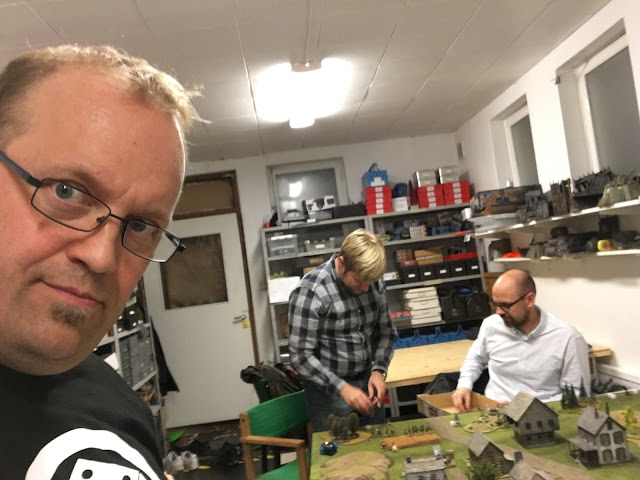 Once again two Nopat-club members braved themselves for the hardships and traveled all the way
to the capital of the Swedish Empire. There we joined like-minded generals and had some delightful Musket Mayhem at the American Revolutionary War, or should I say Rebellion!

Jesper had set up the game for us with Ulf and Paul supporting. I joined redcoats, getting the command in the center with two units of British Regulars and a battallion gun. Ulf was covering my left flank with small units of Queen's Rangers and Hessian Jägers, while Jesper moved in from the right with his tough as nails Grenadiers and agile Light infantry. As per the Musket Mayhem System (designed by Jesper & co.) our command in chief had 2 command dice to distribute and each of our subcommanders and one of their own.

The battle was all about critical objectives, which needed to seized by moving into contact with them and making a successful full action AND then rolling 5+ on D6.

Three objectives from left to right were the moonshine distillery, town house and the pile of goodies (Jaakko and Paul clearly don't understand, that they're about to face the wrath of the British Empire). 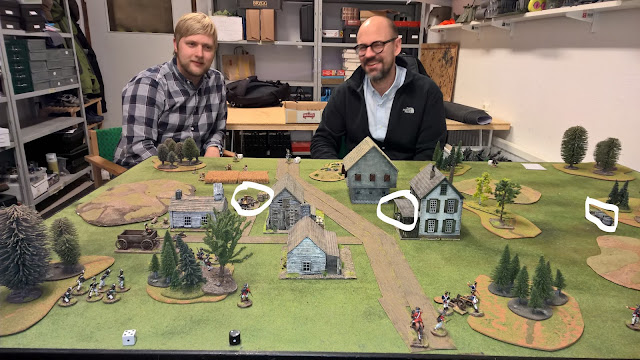 The most coveted objective, even if the town hall is worth
2 points and the other two just 2 point. 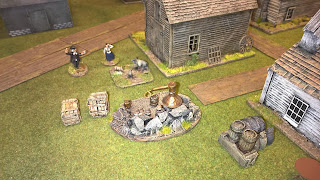 Our forces started out of the battle field had so succeed in a command to move in. Artillery would always make one action, so it promptly arrived before my infantry...  It took a good position cover the central objective. 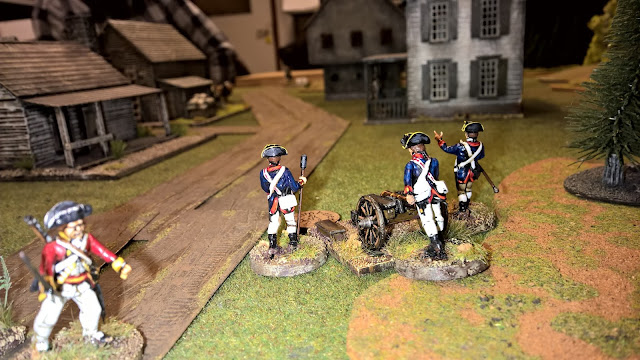 Finally my boys moved in. Our left flank skirmishers were already approaching the moonshine distillery - like by drawn in to it by some magical lure... luckily the poorly trained enemy wasn't making too much of a progress either! 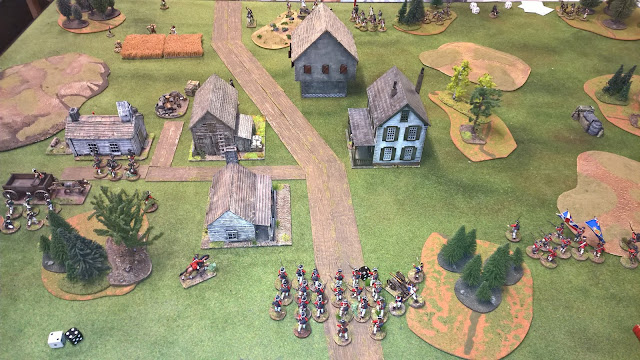 Our CinC clearly has some encouraging words for my boys; the main objective was straight ahead! 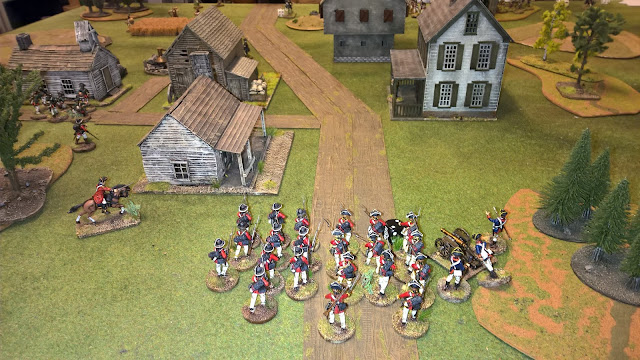 While my boys were still milling about our agile skirmishers were already closing in on the distillery-objective, our plan was to use these sharp shooters to thin enemy lines, while our main force would leggit to objectives... 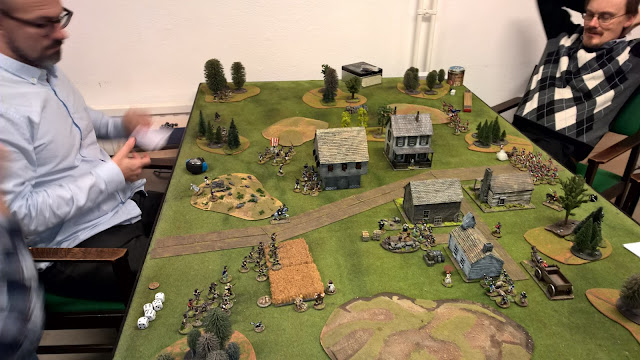 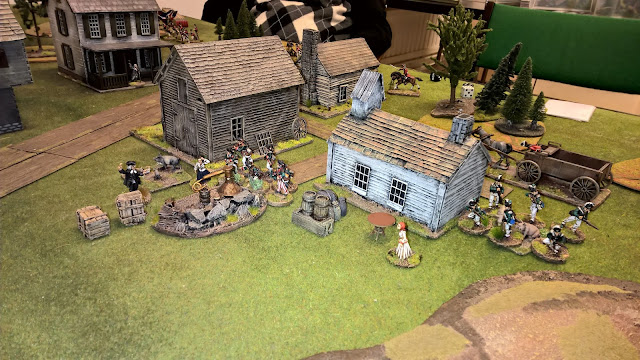 But enemy is approaching en masse! 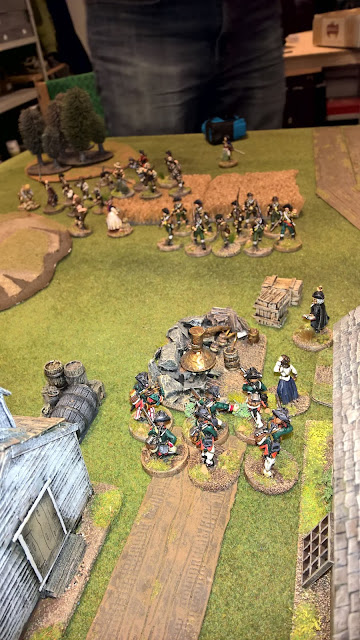 Dirty tricks! Just as our skirmishers were priming their
guns our sneaky enemies played "shoot the enemy officer" -card and
rolled a damn success! Ulf's officer was knocked to the ground
and his units couldn't be given commands this round! 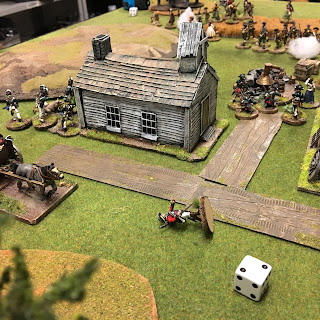 Feeling quite frustrated about this ruse, we were more than ready to let them eat their own medicine: as the rebel regulars declared a charge against the Jägers, we played a "hesitation" card and their charge was stopped at it's tracks! Hah! 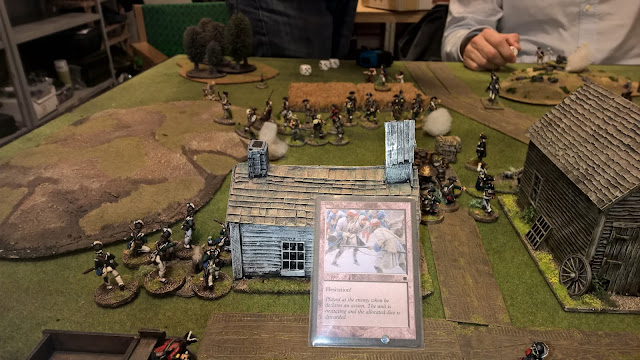 While this confusion ruled on the left flank my boys reached the town hall and also secured the perimeter... 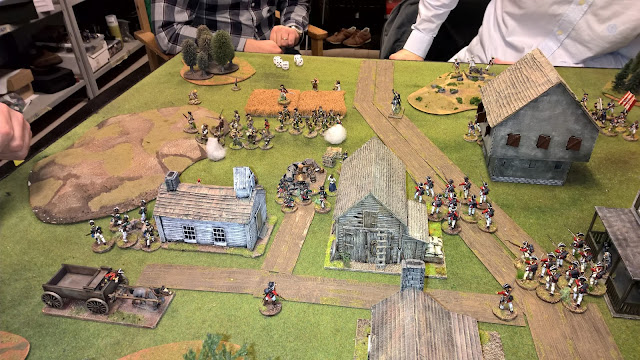 It was now quite clear, that forces on both sides were eager to claim the moonshining distillery... on our left flank rebels made an all out charge towards our skirmishers, whom duly evaded. This left the distillery in the hands of those rebel scum! 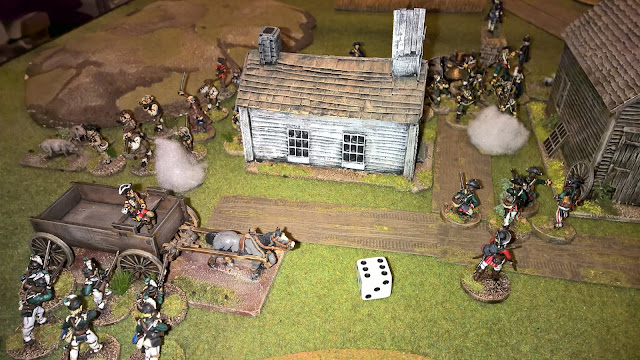 My boys would have none of that and they charged the rebels and won the fight 4-3 (luckily few rebels had been taken OOA by shooting). 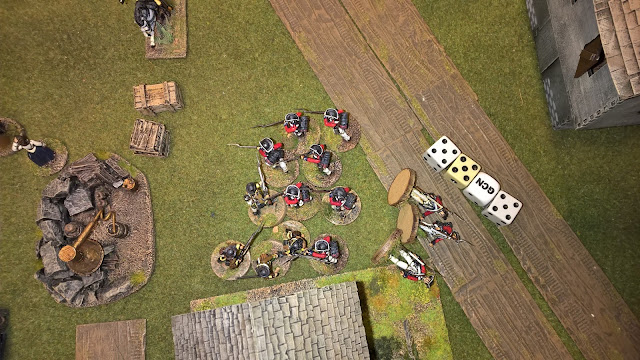 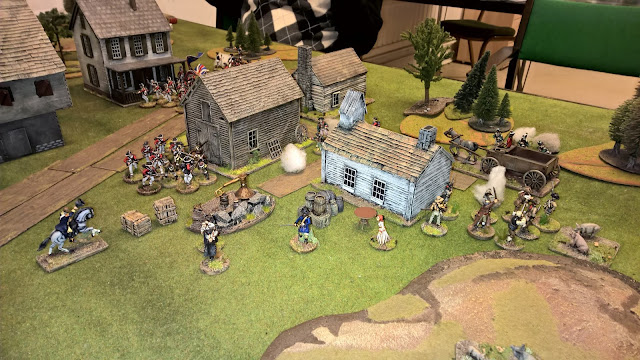 In the meanwhile Jesper's units had also moved towards the village - this was where the battle would clearly be decided! 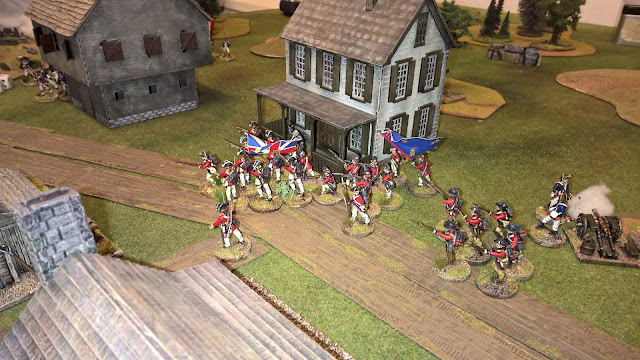 More meat was thrown into the meat grinder, that was formerly known as the moonshining distillery; more rebel regulars charged in... 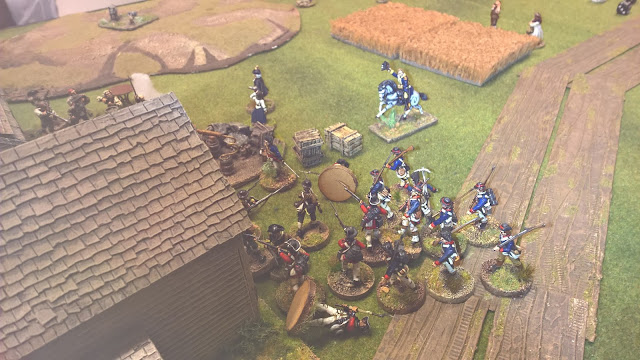 As my boys were in distress now, my other unit left the objective to grenadiers and charged in as well! Next delivery of moonshine would certainly have red tint on it! Grenadiers duly captured the town hall objective, worth 2 points. 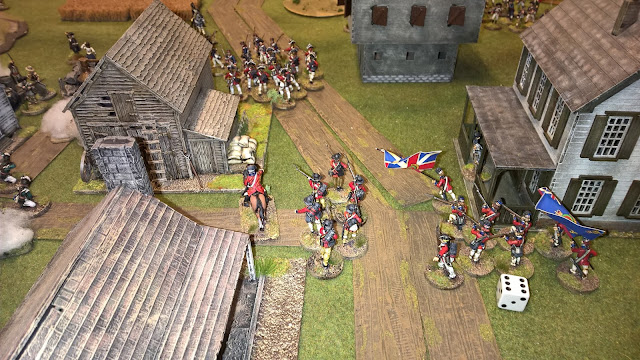 Unfortunately they were too late to save any of their comrades, but in retaliation they wiped out the latest rebel unit. 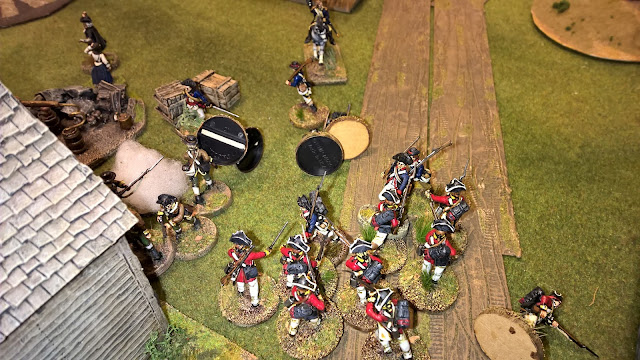 Now all remaining forces were thrown in! Even rebel militia and Hessian Järgers engaged around the distillery. 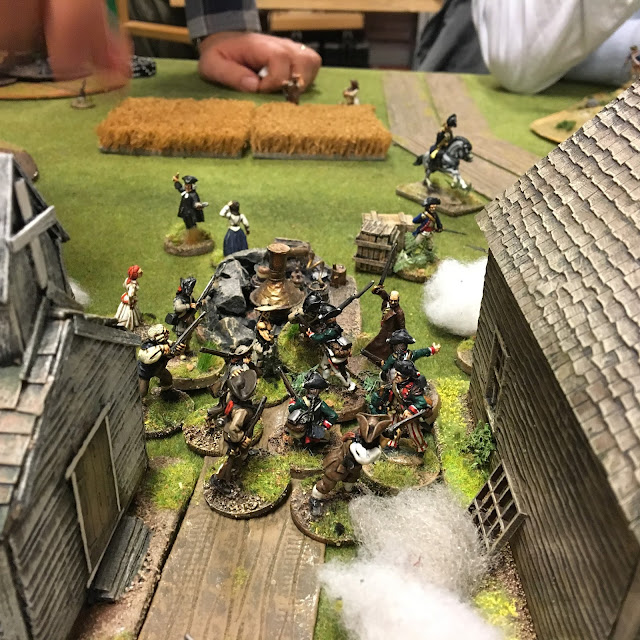 Our nimble Germans were not equipped nor skilled for close encounters, but swift revenge was soon delivered by my boys... HUZZAH! 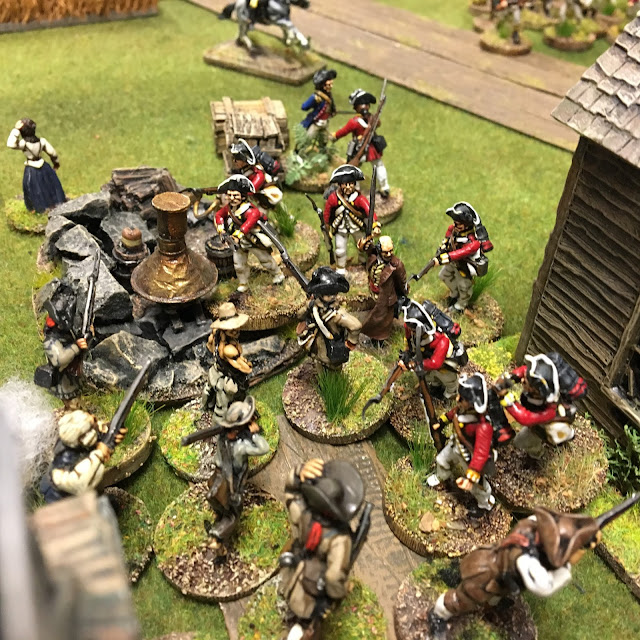 Finally this objective was firmly in British hands! 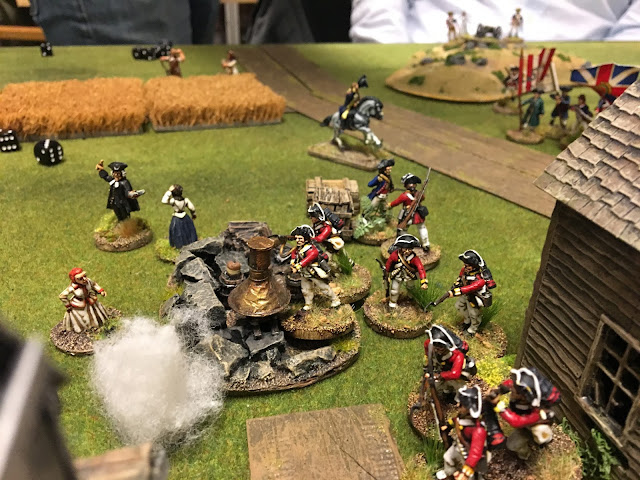 To secure the perimeter Jesper's grenadiers charged the last rebel regulars approaching. Grenadiers actually got their noses blooded, but naturally they held their ground! 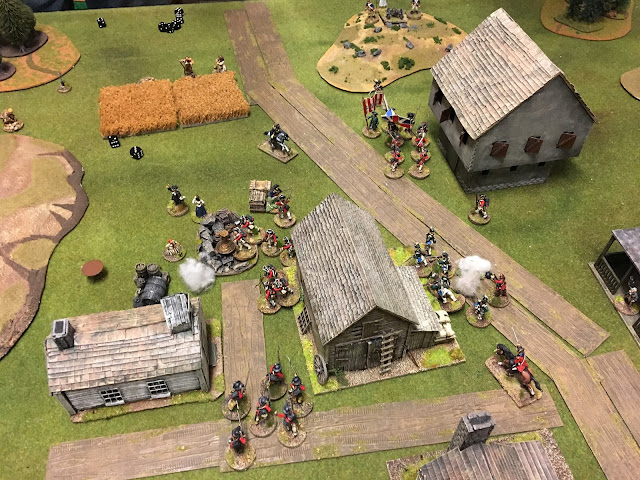 Get lost rebel scum - this is our town! 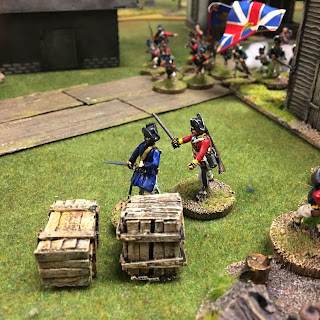