Giving the Raid a go as a BARBARIAN!

One our Barbarian players in the Limes campaign decided, that he doesn't want to play anything
competitive, so we needed to recruit more barbarians - and got two more. As my Brother in Arms for Romans wanted to test drive the Roman faction and I wanted to try the scenario as a barbarian, we set up a "dress rehearsal" game. One of the newly recruited barbarian players, Mikko, joined as my second in command. 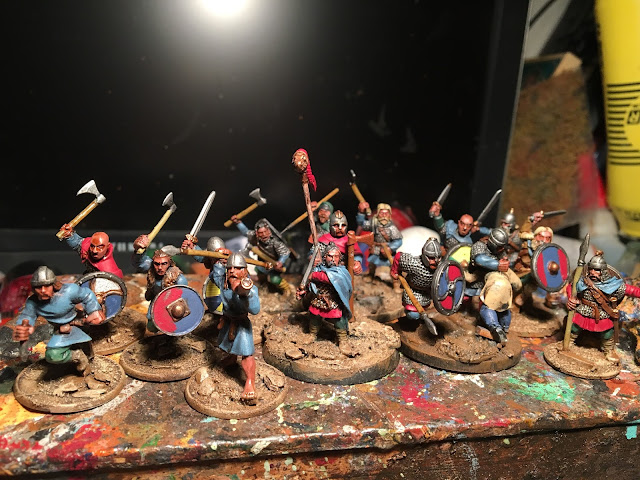 Of course I had to paint a few barbarians for the game, here still WIP

Read on to find out, could even I win the dreaded Raid-scenario...

Finished the Roman HG for the game. 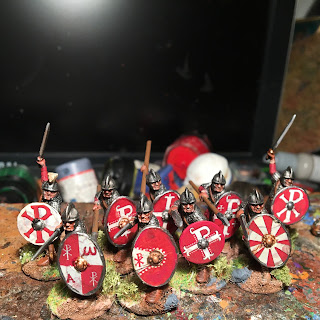 And worked on some Viking / Barbarian fatigue holders 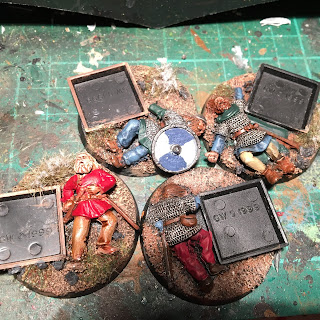 My shopping list
(Surprise assault is marked, but I left it out) 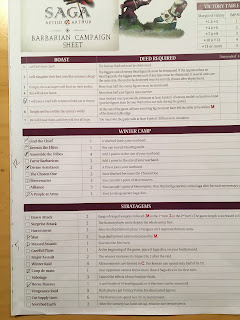 = generates 8 SD, allowed to roll 7, Priest can roll more by taking a fatigue

My plan was as follows:
* Play with 8 dice all the time to get my army moving
* Cavalry will make a first Saxon turn assault on archers
* Hounds will go and exhaust another (or something else)
* Screen with  levies and the small warrior unit
* Destroy enemy hard hitters with either HG or the 10 warrior unit + Saxon melee abilities
* Move the army as a front, not as piece meals (except for units with a mission (horse thieves & hounds) 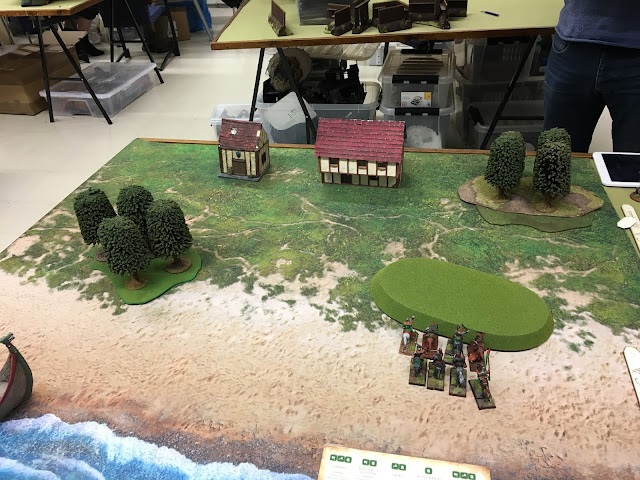 
We deployed in two pincers: on our right flank we had our "suicide teams": horse thieves, hounds and levies with bows, on the left we had 10+6 warriors, 8 HG and our HQ units, all taking cover in the forest 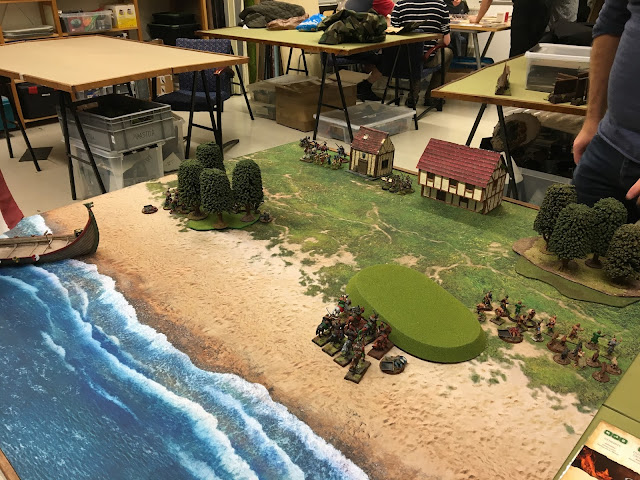 Roman deployment: large building held 12 warriors and the smaller one 8 archers. 10 archers were deployed in the forest on their left flank. Ballista was in the extreme corner. 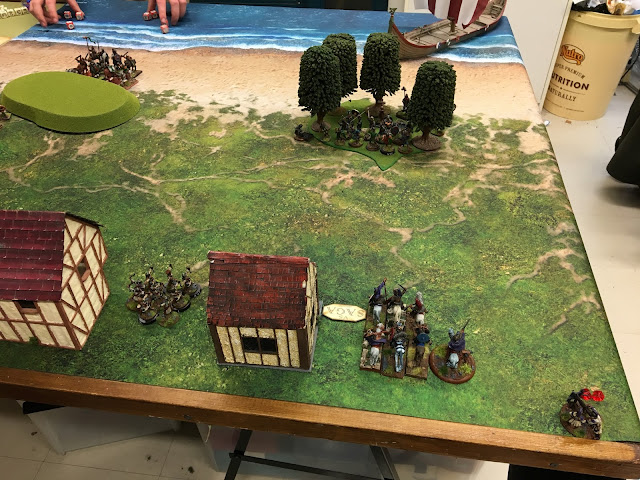 Romans only got 4 SD to use on their first round, so nothing much happened... Ballista shot twice causing only one casualty and exhausting itself in the process. Roman archers in the left moved to the range and shot 3 levies. We weren't impressed...

Then it was our turn: duly we placed 8 SG on the board and planned our first suicide strike...

Our cavalry spurred their horses to gallop and in two moves charged the archers in the open! They then removed their fatigue and boosted their attacks to 15 with Saxon abilities. We were striking hits on rolls of 3's... after a lot's of dice rolling we were shocked: 1 archer casualty and 3 horse warriors down!!! Cursed be the dice gods! 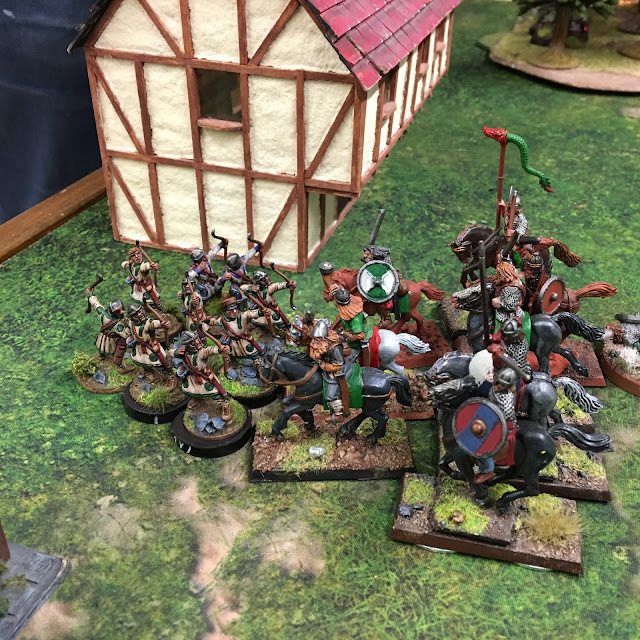 All that then remained was to retreat the cavalry from the range of two Roman archer units. 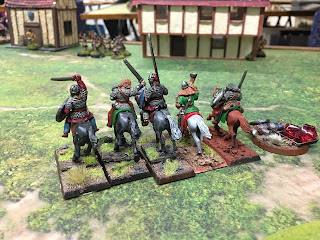 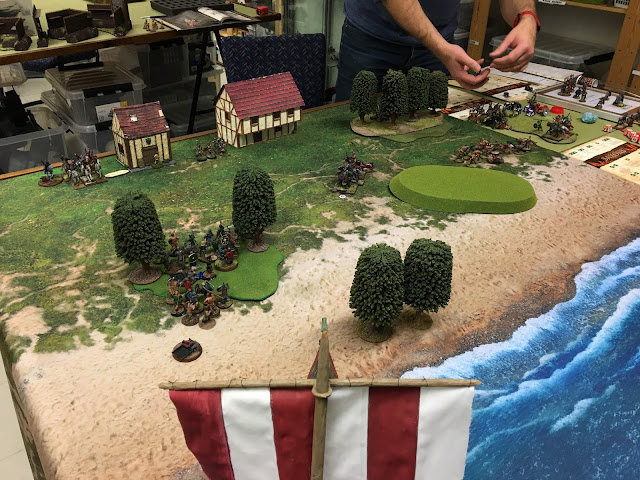 Sami rolled his SG, this time all 6 of them. Still no rare symbols...
(I think he didn't roll more than one of  them in the whole game) 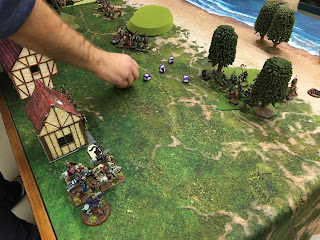 Suddenly raiders from the sea arrived at the rear of our hounds and levies!
They charged our hounds in two moves, but failed to beat them. They then exhausted themselves. 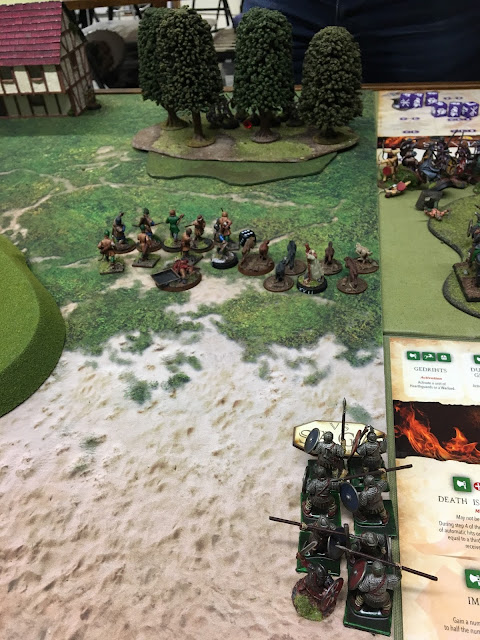 The 12 men Roman warrior unit exited the building and charged our cavalry and slaughtered them. The suicide attack had ended... 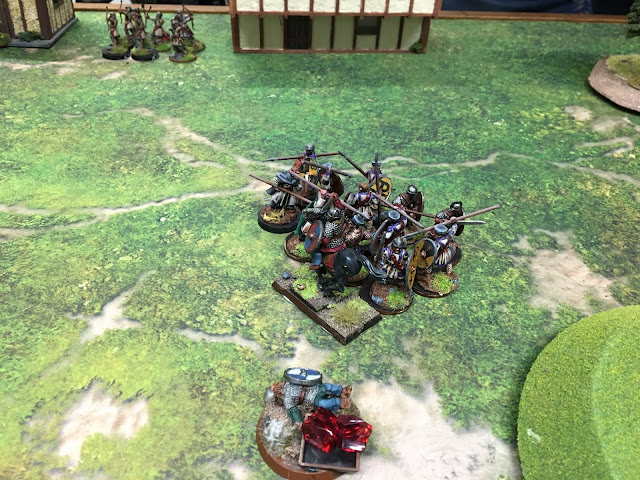 On our turn we now charged our dogs to the Roman archers in the forest. We only killed on or two of them and only 1 doggie survived (another failed melee). At least the archers were now exhausted.
In the meanwhile our levies creaped to the forest edge. The lone doggie disengaged to the left, but was shot later... snif! 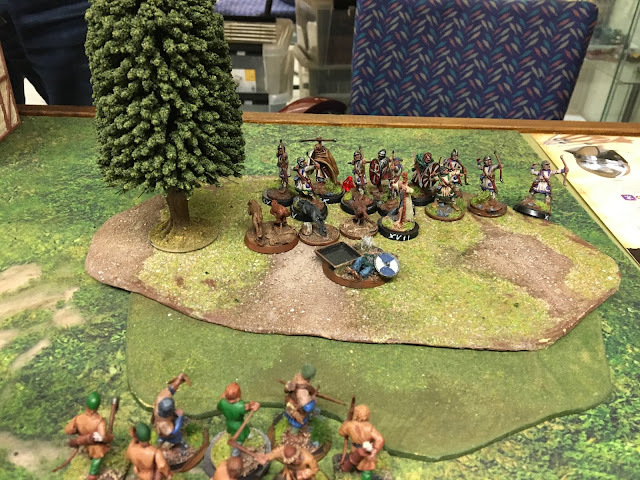 On our right flank our forces were now moving forward and out of the forest. Our screening unit of 6 warriors had lost half of their numbers to Roman shooting, put they were pushing forward anyway! 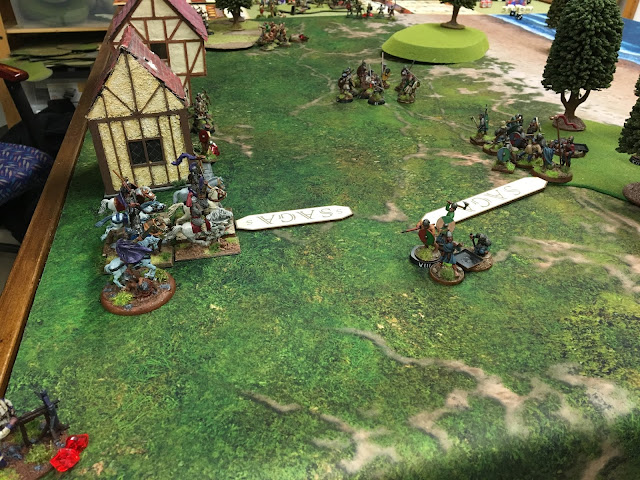 (This might already be Round 3.) Our warlord and his elite 8 HG's charged the enemy HG - this battle could be a decisive one...
Once again we wen't in "fatigue free" and with bucket load of dice (at least 24). Sami played 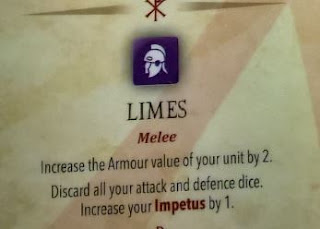 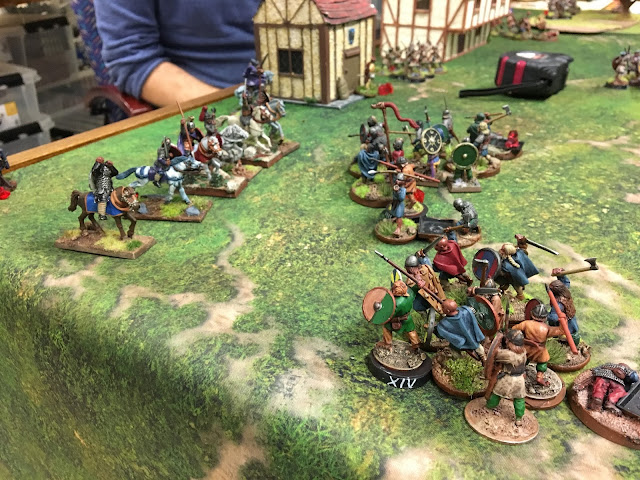 In the meanwhile our levies were making their way towards the table edge. 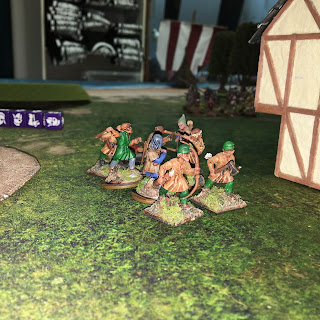 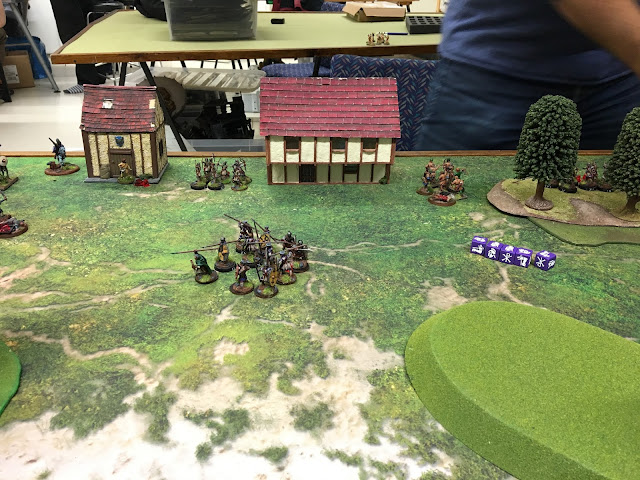 Roman elite prepare for the charge... 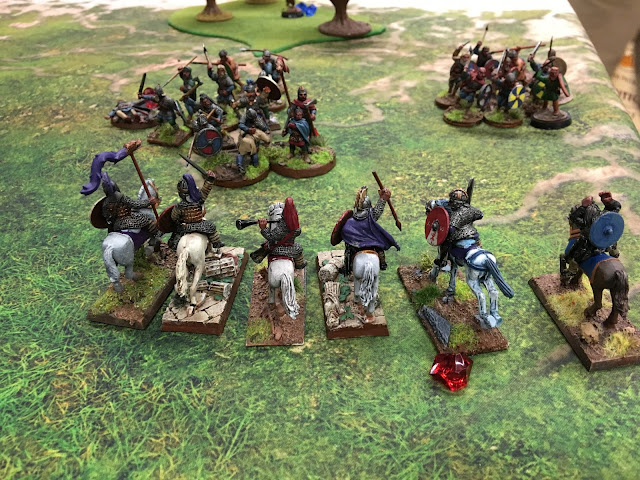 Another brutal fight... this time were underdogs in terms of fatigue... our Warlord was looking in terror as his bodyguard was hacked to pieces... 2 Roman elites fell as well. We knew now that the battle was lost, but remained in our grim resolution, to take it to the bitter end! 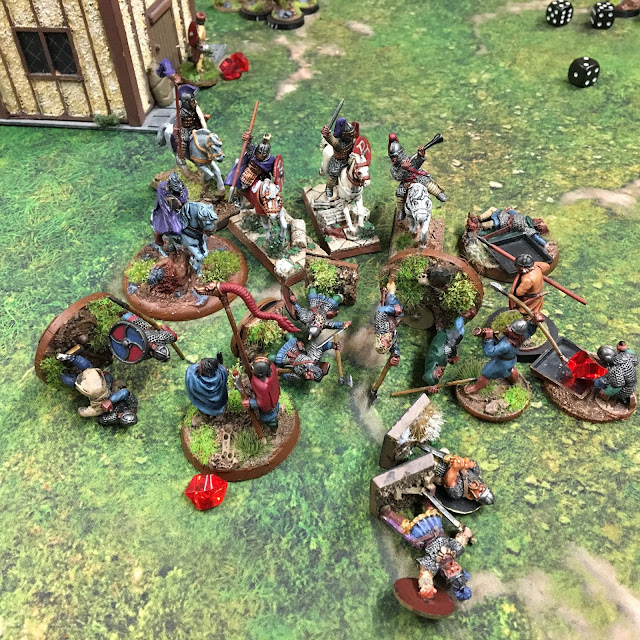 Roman archers moved forward and peppered our warriors with few shots, but no casualties 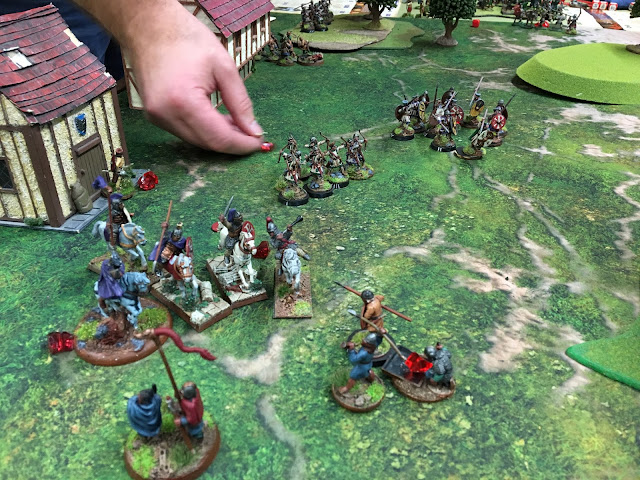 So, we considered what to do and considered: if this would be real campaign game... CHARGE! 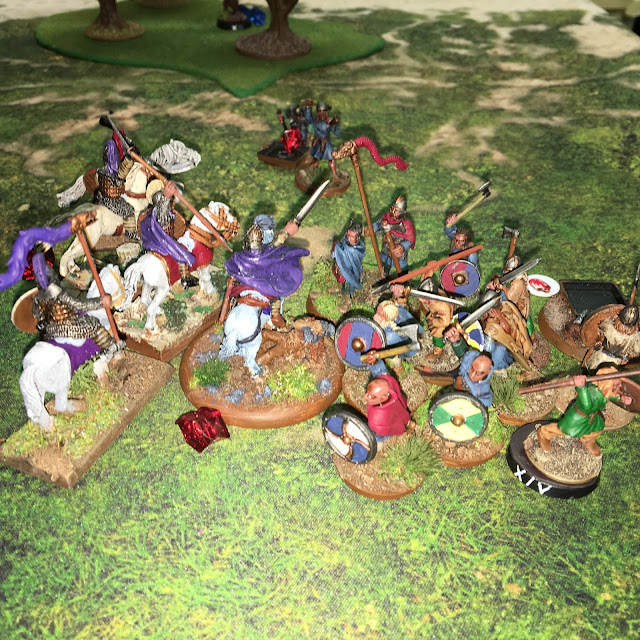 Our WL and warriors charged the Roman Centurion with revenge in their mind and 8 hits were scored! Finally the dice started rolling! (or we simply started using (my) skull dice, that Sami had been using...). After saves 5 hits remained, so the warlord down (instead of all the HG), hurrah! 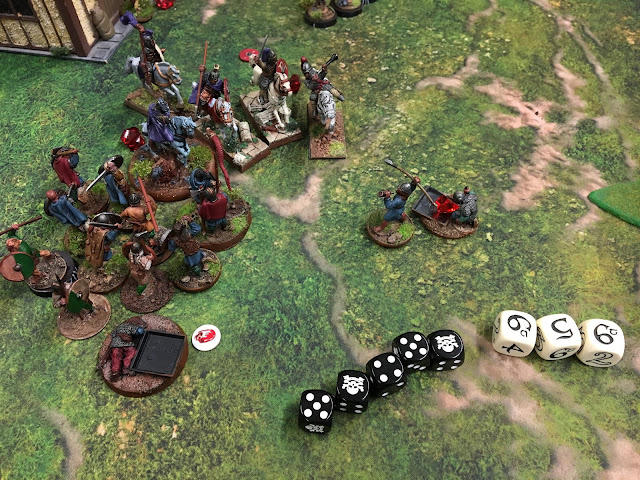 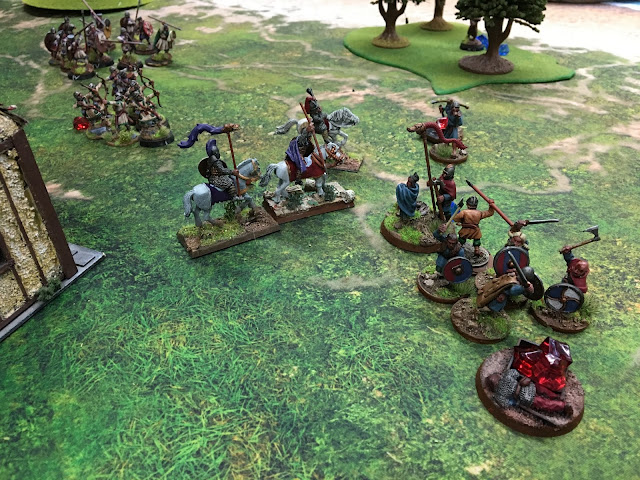 Romans weren't rolling that many SD anymore, so their actions were limited. His HG charged our lone warrior - whom survived! This was actually quite critical, as if that lone warrior had died, more fatigue would have been given to my units nearby. This would have slowed my warlord and the other warrior...
Few more levies fell to shooting. 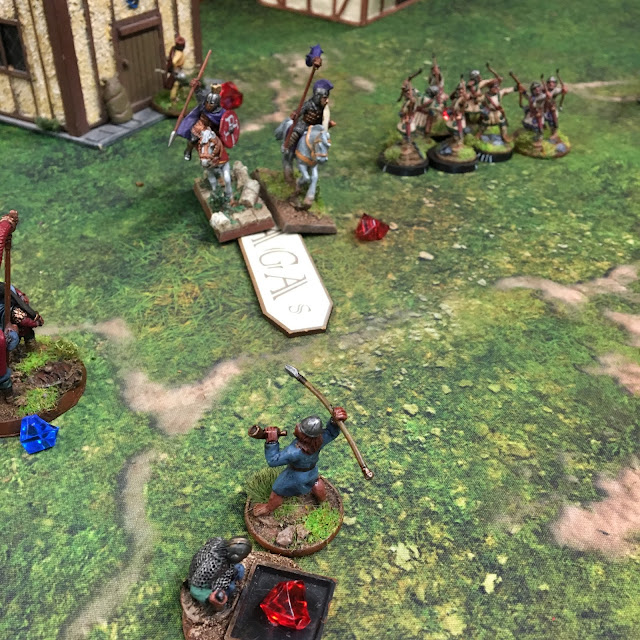 Final dash: my warlord and two warrior units dashed forward to the waiting pleasures in the Romano- British villages waiting. I eally had to calculate what would it take to get to the edge with all units - considering, that Sami could use fatigue to slow my units down. 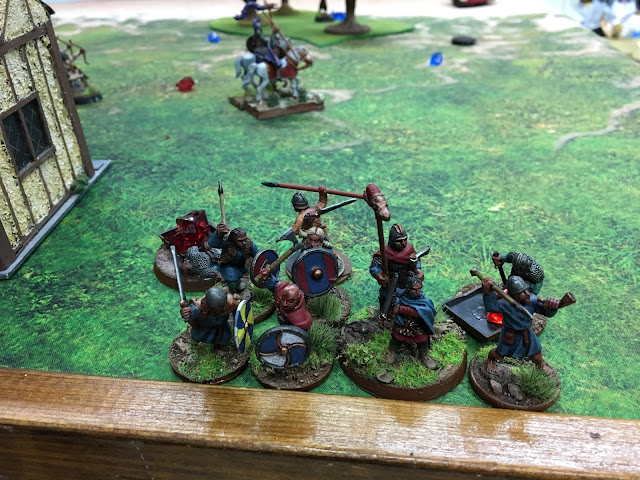 Pile of Saxon (and hound) casualties was immense... 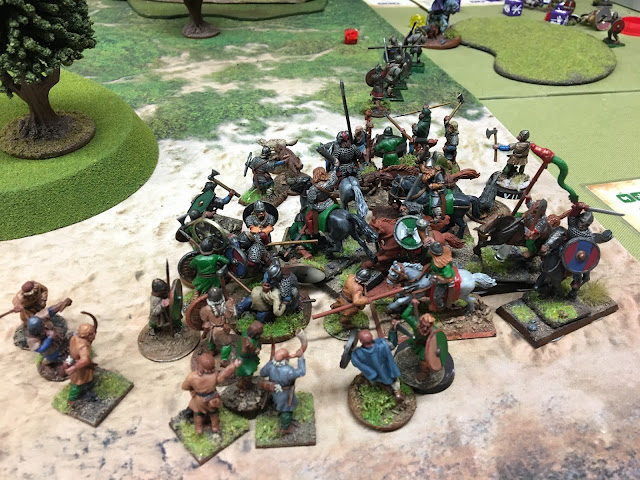 Equals to 4 points in determination


Conclusions - is it possible to win the Raid scenario with Barbarians?

I can't really give an answer, as so far we have played it four times (3 X Saxons & 1 X Huns) and every time Rome has won it a large margin. So we will need to keep researching.

I think our plan was good and solid...

Why did we not win this game?