First go with the Rising Sun by CMON

...to try out recently arrived Rising Sun boardgame. Read on how it went and how did we like it.

4 of us from the Nopat & Taktiikka Club had participated in the kick starter and most of us had already gotten the game (not me as I was late with my payment for the delivery :-( ). So we were more than eager to give it a go. Marko also joined us as one of us had to cancel.

Soon the game was set and clans were distributed randomly. I was wearing a dragon t-shirt, but didn't get the Dragonfly clan, but the Fox clan, which proved to be pretty good. I played with my painted samurai & sohei minis as I haven't had the chance to paint the proper minis for  the game.


And then the game started - quite slowly as we were careful to get it right (and still we made mistakes). 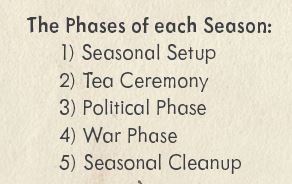 And of course we started to make our practices and the Tea ceremony changed into a Beer ceremony!

After short negotiations I made an alliance with Matti, whom was my neighbor in the map and we agreed to cover our asses with this alliance and focus on expanding to opposite directions...

My province was Kansai with the orange castle and Matti in Kyoto with the green turtle fortress. Marko was west from me and Ludde in Hokkaido, far east.

First mistake: a Shinto model (priest) was deployed, where it should not have been

Soon things started to look grim as Marko was massing his yellow horde and even a  terrible monster had been summoned!

I actually ended up in a fight with Marko's forces, but luckily I had chosen my prayers correctly and had boosted my honor to nr.1. position: we made war and I managed to take one of his models hostage and then our forces were even on that region and I won the tie due to being higher on honor. First round result was 1 victory in battle, one Kami (monster) summoned and well positioned and several provinces with my forces (see fox clan special ability). I was also leading in victory points, which was surprising!

This time I made an alliance with Ludde (Hokkaido, Dragonfly clan); my argument was simple and obvious: we were both very well positioned for harvesting and I would get to start this season.
So soon our coffins started to fill with coin and more VP's flowed in. Things started to look good. Ludde even sent his pet dragon to visit my province!

As my further actions (political mandates / prayers) I acquired several  upgrades, including 2 X 2 Ronins... I was truly well prepared for the war! Even the fact, that Ludde played "Betrayal" didn't much bother. I then proceeded to sell "I won't attack you" -deals and my coffins filled even more!

Second war phase saw me fighting on several fronts (I didn't keep my deals hahahahahahahhhahaaa). With combinations of taking hostages and deploying Ronins I won two battles and those hostages gained me more VP's, that were taken from other players.

Excellent 2nd season saw me taking a clear lead in the game and as we had to sop due to time constraints, I was declared winner!


And for the next game I intend to paint the Fox Clan!