The Battle of Dorylaeum took place during the First Crusade on July 1, 1097, between the crusaders and the Seljuk Turks, near the city of Dorylaeum in Anatolia. - Wikipedia.

Crusader vanguard needs to hold out and protect the camp until rearguard force arrives and saves the day. Rearguard was deployed, but could be activated from round 2. Crossing the river would take one move.

Victory points would be awarded from: 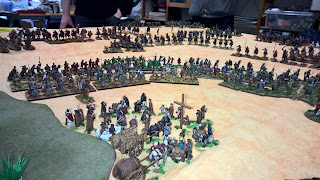 Our Order of Battle

Map of our battlefield 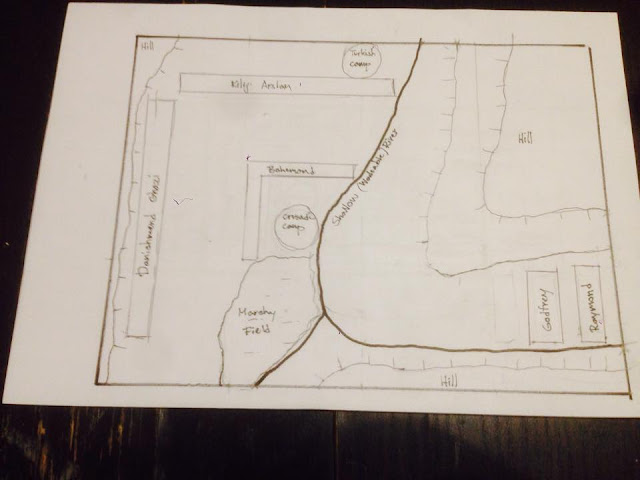 Our umpire Aleksis watching over as the table is set 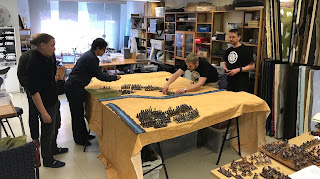 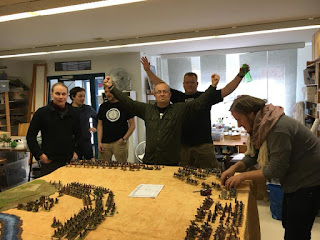 Poor crusaders all but surrounded! 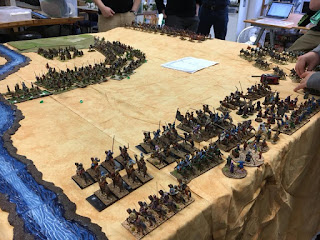 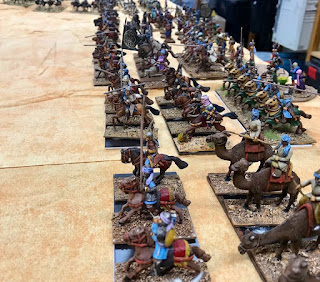 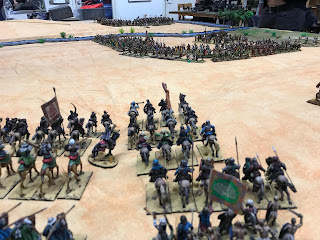 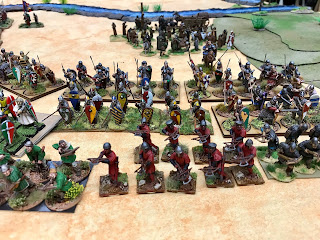 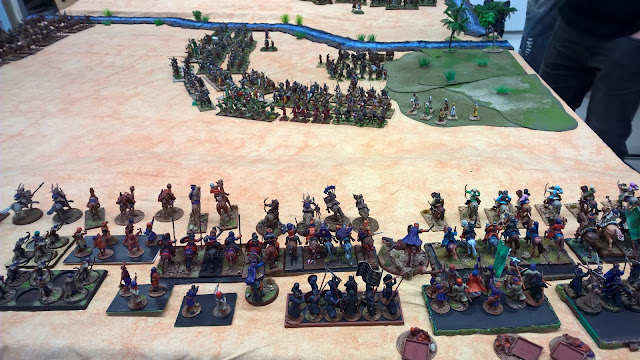 Crusader rear guard placed on the table
(to be actived from round 2.) 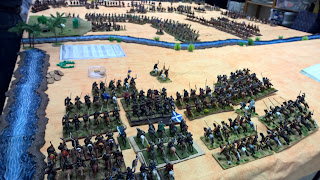 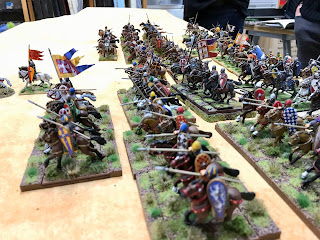 We got to start the game and mine and Kilij Arslan's divisions surged forward to pepper the crusaders with arrows. Hassan's division tactically held back for now... 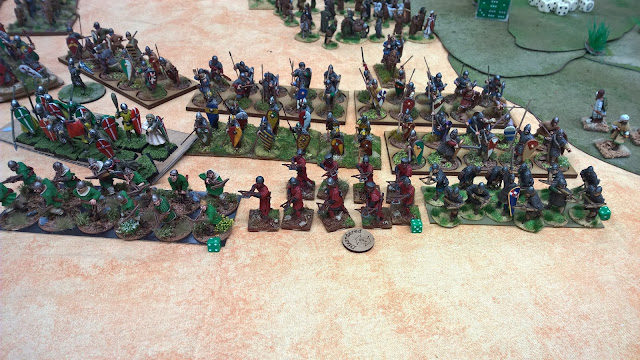 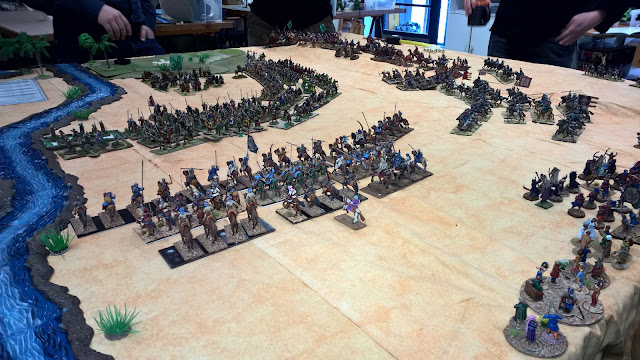 As the Crusader rearguard was sighted in the distance our forces didn't waste time, but charged in!
Enemy shooting had also been withering, so it was high time to move in and take those crossbow units out of the battle and so we did! 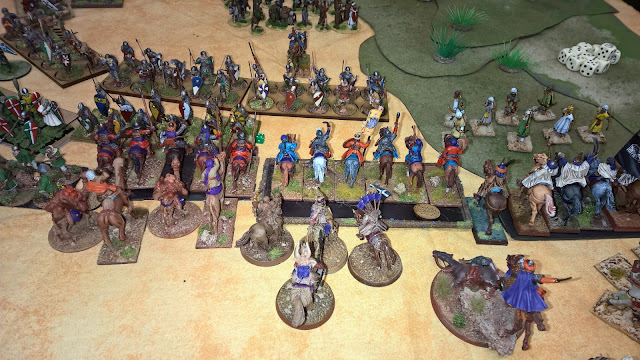 First line of crusaders destroyed by my cavalry! 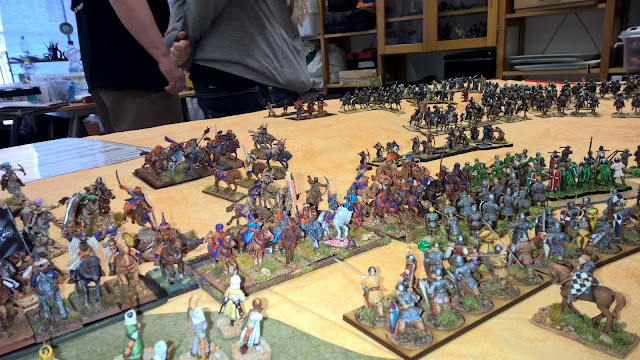 Hassan's division also decided to start moving, how good of him!

As our first wave had taken in some shooting and then fought severfal rounds of melee, they were eventually destroyed by the second battle line of Crusaders... 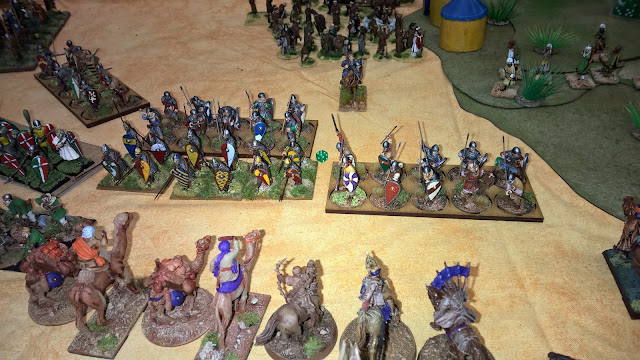 Overview end of round 3. Crusader rearguard has reached the river - but slower than expected! Will they make a difference in time? 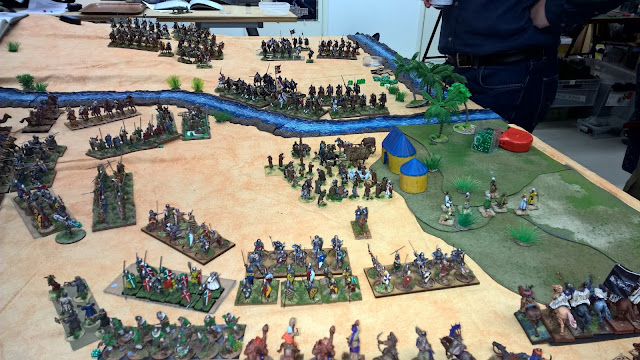 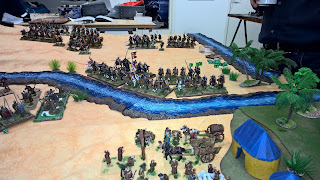 As the remnants of the first wave scattered, Danishmend waisted no time in commanding his remaining mounted fighters into a charge and his lieutnant commander did the same for the muslim infantry. One of the cavalry units chased the enemy skirmishers deeper into the swamp and prepafre to enter the Crusader camp! 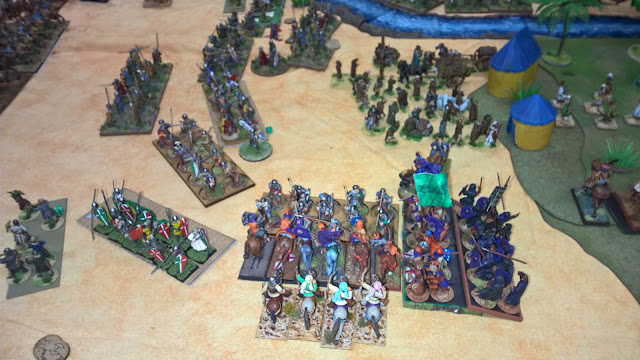 On the far side of the battle field a terrible sound rang in the air as heavy cavalry units smashed into one another as first mounted crusaders charged across the river... would this turn tip the balance of the battle? 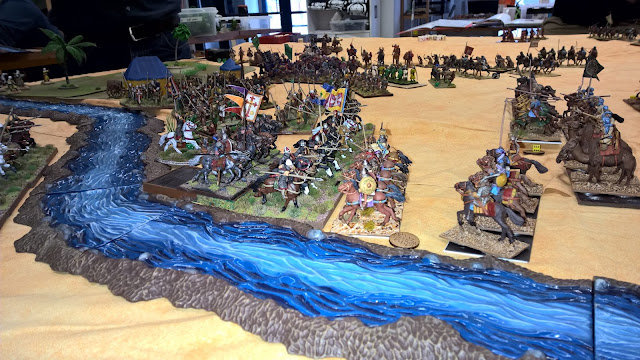 Luckily Crusader Rearguard had had some difficulties in getting their forces in to position and most of the were still behind the river... 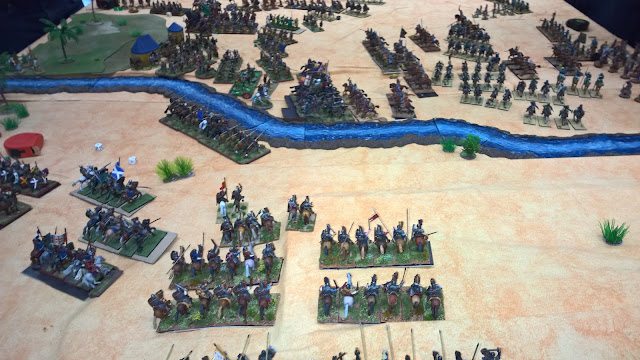 And even if some muslims were wiped away, we had plenty of reserves as Hassan's units joined in stemming the tide! 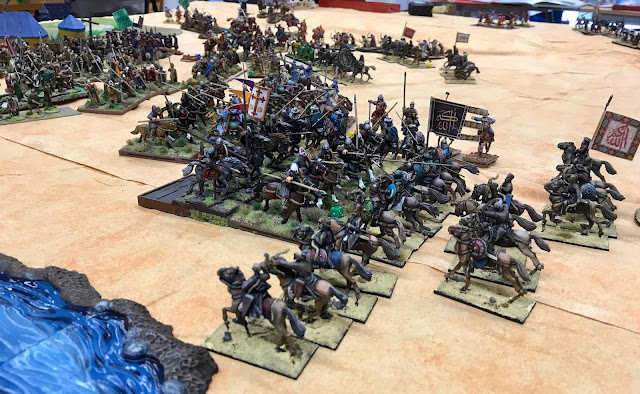 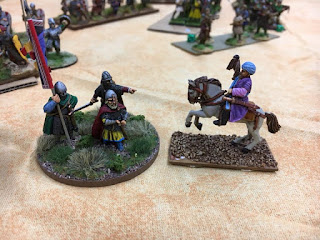 In the meanwhile my forces broke through and sweeped into the flanks of the remaining defenders of the camp - huzzah! 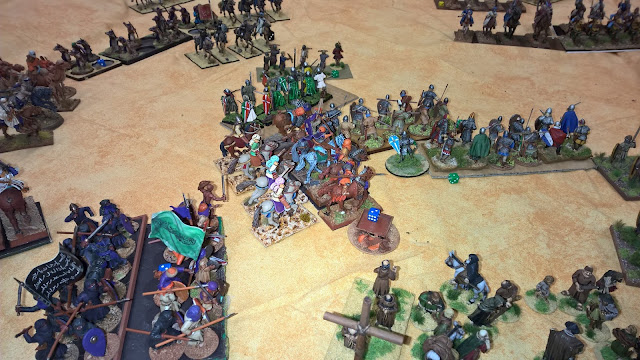 Overview at the end of round 5. (I think) 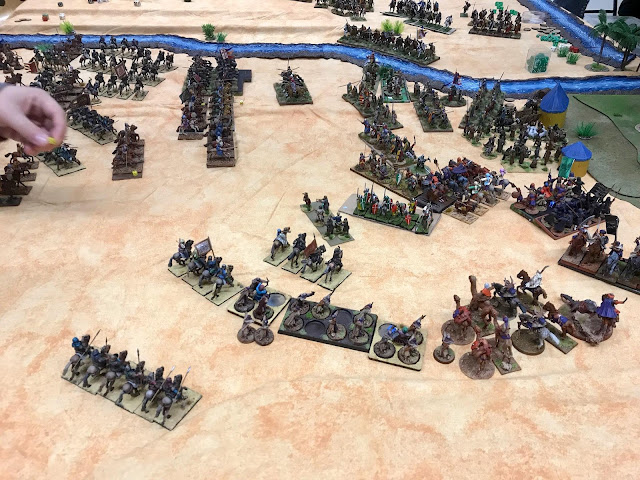 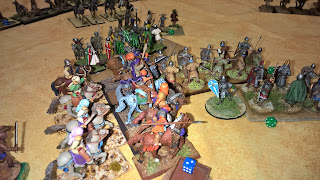 On round 6 my infantry started looting the enemy camp. To everyone's surprise the Crusader infantry fighting to it's flank still had the fighting spirit in them - or actually their commander Bohemond had: he joined into the melee with all he got and they managed to win that round and my cavalry jumped out of the melee! Maybe it was good, because if my unit had broken, my division would also have broken... 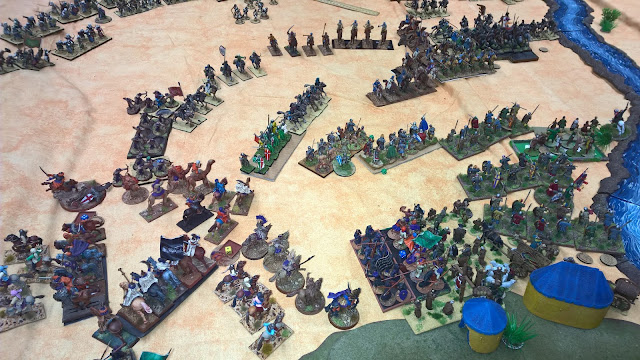 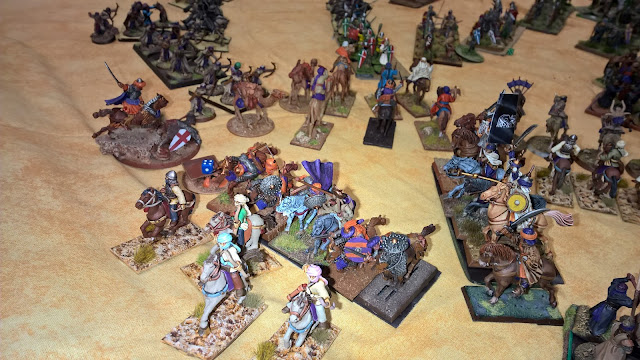 Overview of the central battle field: enemy army has broken as all four vanguard divisions (and one o the rearguards too?) have broken... 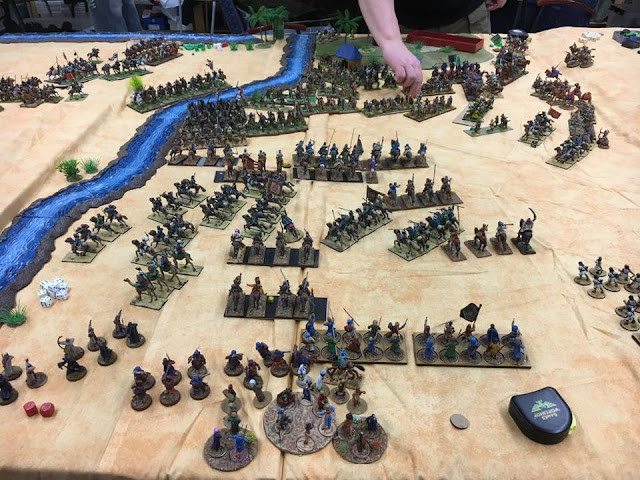 Panorama of the battle field in the end of the game!

Only finished on unit of Crusader cavalry for this game (I did worked on my Saracens too, but they weren't quite finished): 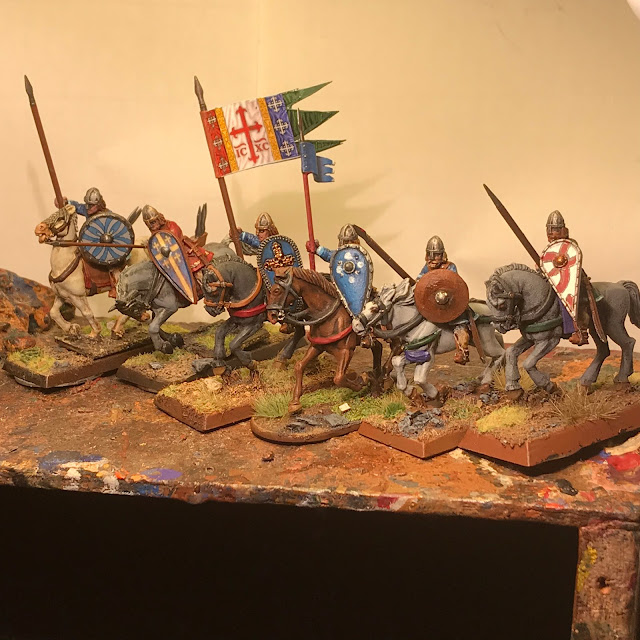