A great tradition of gentlemanly summer weekend with wargaming, good friends, cold drinks, fat cigars and hot sauna has been established at our club. You can find blurry accounts of previous sessions in my blog.

This time we decided to run a kind of team tournament with a Pasific team.
Concept is based on the campaign day event pack  by Downorder.com - thanks for sharing!

Miniatures painted for the event

And some more jungle terrain

And finally: a truck for my bamboo stick fighters

My plan was to have large units, whom have decent firepower and lot's of melee power. I would focus on overwhelming the enemy on one flank and then steam roll the enemy units one by one

Some of the armies


Japanese overall commander for the first round: Marko 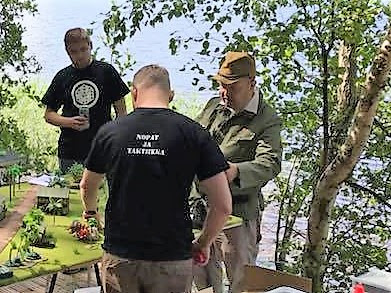 So it was time to agree on  matching players. Antti and Jaakko had had a longer break in playing BA, so we agreed to pair them. Marko faced Kalle in the cabin and my first opponent was Ludde playing with a (late war) Australian force (my miniatures).

As our campaign day would follow broadly historical events of the war in the Pasific, first round was all about Japan attacking. Envelopment was rolled as a scenario and Jap players were automatically attackers, while allied forces were deployed hidden.

As Ludde had to first deploy at least half of his units, I had the opportunity to strongly play my refused flank plan and so my forces moved in from the extreme left flank - at the same time staying very far from the enemy tank.

Many Australian units stranded in their left flank

Rapidly my infantry moved towards the enemy deployment zone (I would score 2 points for every unit there in the end of the game), while my artillery and grenadiers formed a fire base at the extreme left, focusing their fire on the enemy engineering squad with the dreaded flamer.

As Australian units had taken lot of pins and even few casualties from the preliminary bombardment, I felt that the game was "in the bag" right from the beginning... this proved to be too early a feeling!

My truck driving bamboo stick fighter unit was first to make contact with the enemy: they charged in the middle and wiped out an enemy unit, consolidating into the dense jungle. My regulars moved a bit more cautiously hugging some cover and avoiding the enemy artillery sights.

Enemy perspective: many units still marked as hidden. Aussie reinforcements arrived in the cover of the white rocks

Fluff-playing (or just drunken idiotism?): my two suicide antitank hunters went for a kill; first one was cut down by the tank's machine gun, but the other blew it (and himself). This was of course very much to the Japanese doctrine, but in points wise I donated 4 points to Ludde, while gaining only one myself!

But the time was ticking so my units needed to leg it! My left flank units pushed forward benefitting from the havoc my cannon fodd... errrr I mean bamboo stick fighters had caused amongst the enemy ranks.

Only my Kempetai officer was left from the alfa strike team, but also the lines of Aussie defenders was very thin at the center / Aussie right flank...

Some Aussie troops moved to stop me from the left, but it was too late for them: Australian lines had
been breached in the middle!


Eventually our game ended in a draw with me having 6 kill points and Ludde 5.
If I hadn't charged and destroyed the Matilda and hid my two suicidal antitank attackers, I would  have won the game, oh well... I wonder does it make sense to count a single antitank dude as worthy as a whole unit?

Marko and Kalle fighting it out in the cabin

All first round games had ended as draws, so the score was 3-3. Never mind, that Kalle and Marko had fought a wrong scenario! I was raised to the position of the Japanese CinC as I had scored the highest kill points amongst the IJA.

I held a council with my officers and we decided to single out my fight as the strategic battle, where we would score double points for winning. To support this cause Marko even his AT-gun to join my ranks. So was well equipped and motivated to fight Antti and the US Marines...

My guns formed a fire base while my infantry moved out in two spearheads - both lead by - surprise surprise bamboo stick fighters. While my strongest push was in the middle, as shown below, my truck driving unit with the Kempetai officer made a rapid sweep via the right flank rocks...

They struck hard at the enemy and wiped out a unit of marines, but were then encountered
with more they could handle!

And were no more, but had again won more than their points worth!

Several more charges were initiated against Marines already mauled by my HE weapons and these fights were won by my forces across the battlefield - including once again my SAT-bombers.

Marines are hard, but when Srgnt. Striker was more or less the
last man standing, even they had to yield! 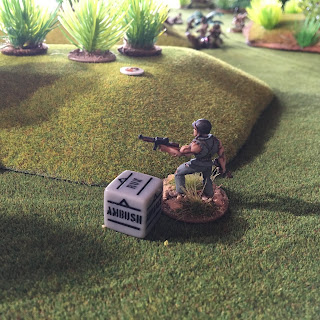 Pics from Marko's and Ludde's game

After the second round we decided to take a sauna break (not a tea break, as we are Finns!)

After the sauna sessions some players were too “tired” to continue, but the more veteran of us continued with Blood Rage!

Sunday continued with a lovely weather and allied forces refused to continue fighting (and went to sauna again) and we accepted their (shameful) unconditional surrender.

After sauna (and lake) and lunch fighting spirits were high again. This time we moved up to the skies were 6 zeros faced (unhistorically) 6 Spits in a game of Blood Red Skies.

Me and Marko continued to fight for the Emperor against Kalle and Ludde.

Marko faced 1 to 2  odds in his first BRS -game and performed very honourably!

So I could have the pleasure to shoot down spits with the advantage of 2 to 1 odds!

Once again a heroic victory for Imperial Japan...

Great weekend and lot's of glory for Japan!