Battle & murder at the monastery 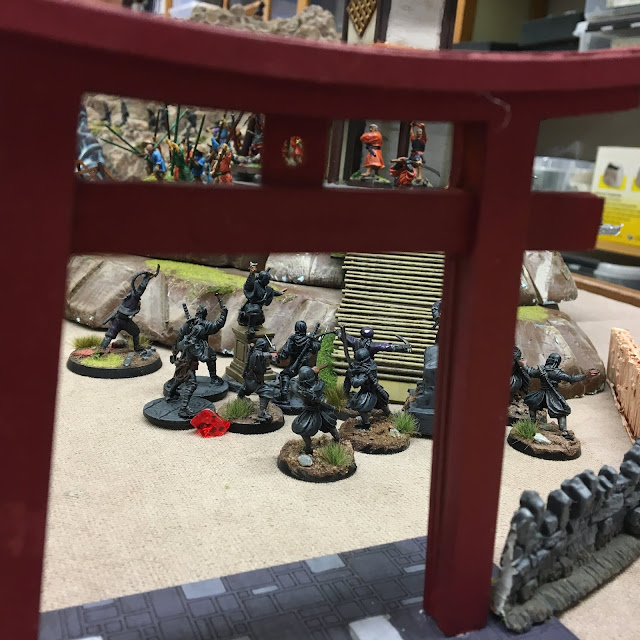 This months Saga Game Night was about fan made battle boards. I had recently discovered and played Fantastic Saga pitting my Greek Hoplites (and Ares) against Jaakko's Undead, but for this evening I wanted to "re-enact" my experience from Hamburger Tactica (2014), where Patrick & co. from Kurpfalz Feldherren were running the same scenario with the best looking games table, I had ever seen (until I saw more tables from them next year!).

Samurai vs. Sohei vs. Ninjas

So the idea was, that all three players would have at least one objective against each of the enemies. I was playing ninjas, Matti was defending the monastery with Sohei and Mikko attacking with Samurai & Ashigaru 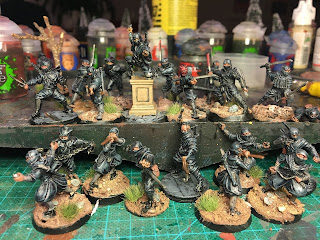 Some speed painted ninjas for the game

We chose our objectives in secret and they were as follows:

I had following set up for my forces (5 points warband)

I got the start (and other players rolled 3 Saga dice for their boards). Matti and Mikko were trying to get their heads around their battleboards 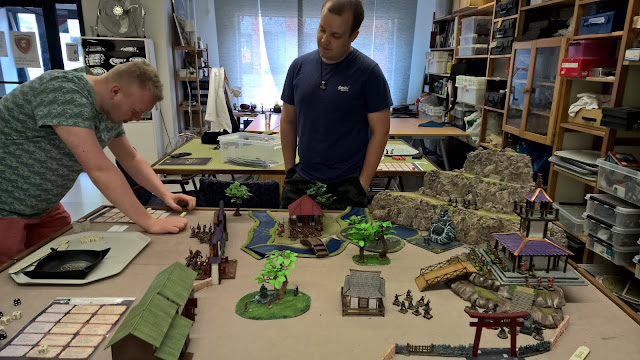 Samurai forces were massing at the monastery gates, ready to charge in! (but who's the fool, that have designed these not so defensive walls?!) 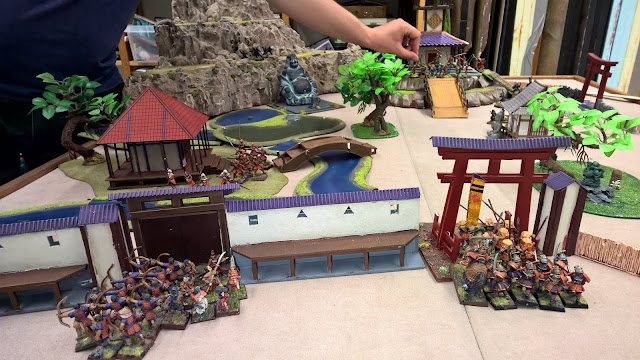 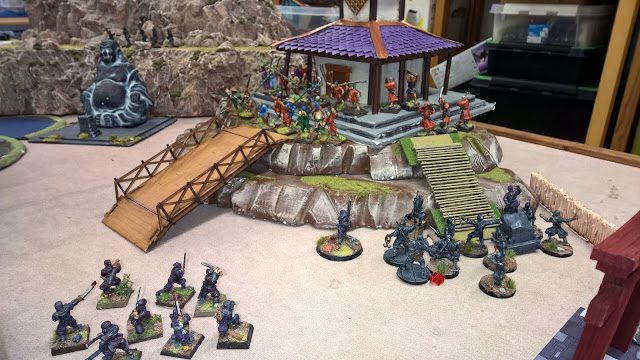 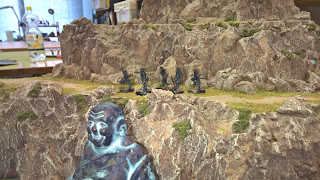 On the Sohei turn, monks with Teppos blasted at my Shinobi (WL), whom had to do his best Matrix moves to avoid being shot to pieces, this exhausted him. Mikko's Samurai had entered from both  gates and were heading towards both shrines... 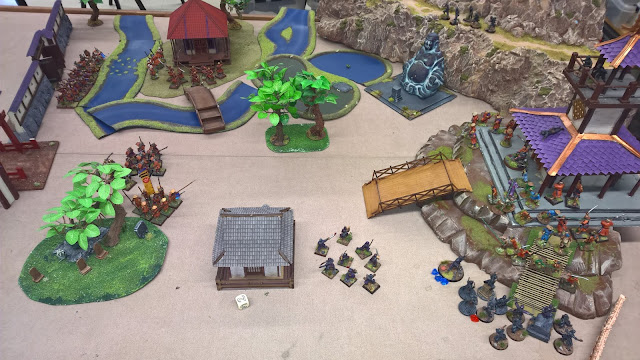 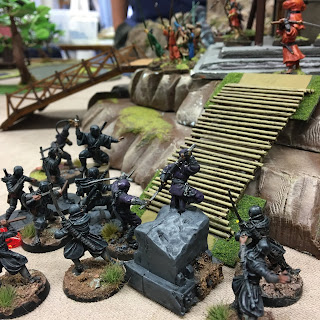 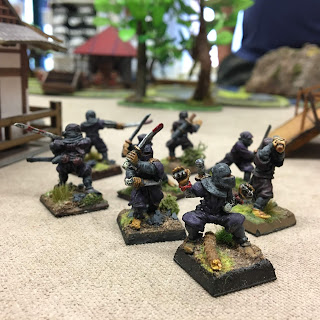 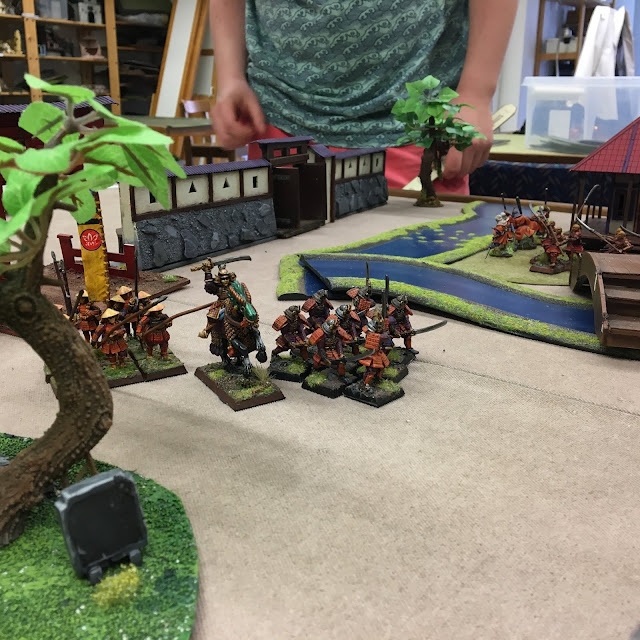 Sohei WL shouts out orders, unawares, that he is being surrounded.... 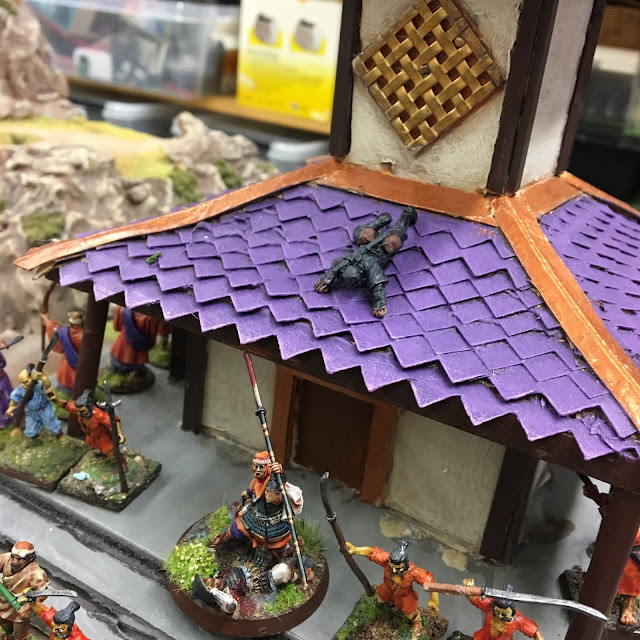 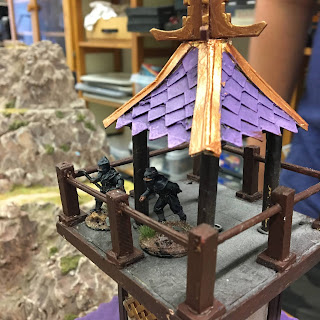 Matti's veteran Sohei didn't just stand by to get shot by Asigaru archers, but
charged into ronins 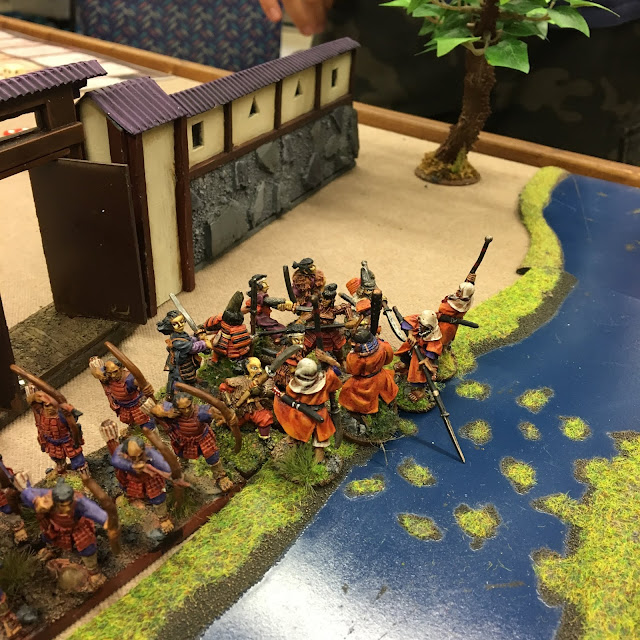 And chased them away! In the meanwhile, the shrine island was threatened also via the damaged bridge. It seemed that WL Mikobu was very eager to get into grips with the enemy! 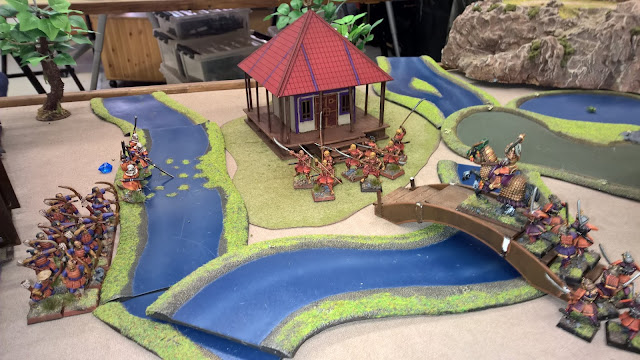 Once again the Sohei chose to attack! 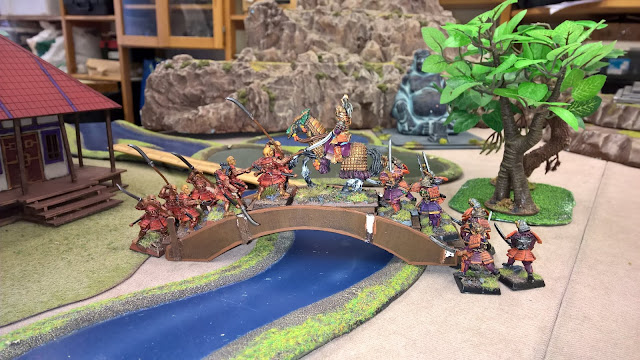 At the temple, one more ninja unit was approaching via the mountain side 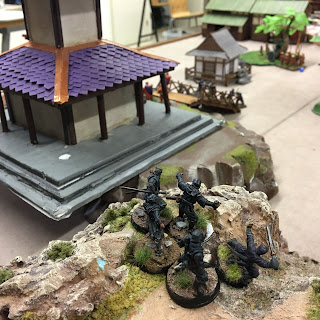 Sohei WL charged my ninja initiates and drove them off, but this left him exhausted and vulnerable -
his bodyguards were far away! 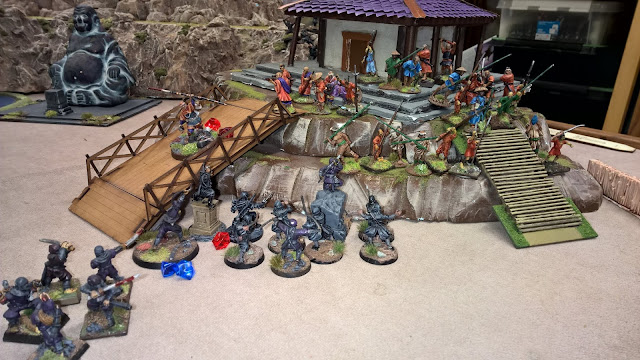 I got my turn before Matti and the exhausted Sohei WL was just too soft and valuable target not to assasinate! My Shinobi finished him off and continued to bash Soheis with Teppos 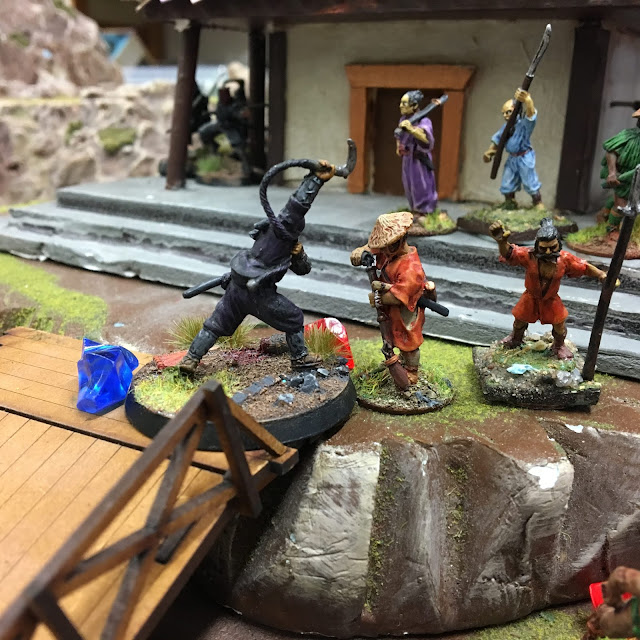 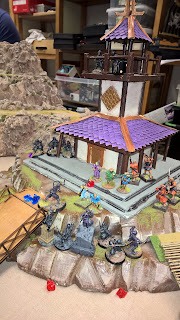 In the middle of the field one of my scouts was spying on the Warlord Mikobu... whom had driven the defenders of the bridge off 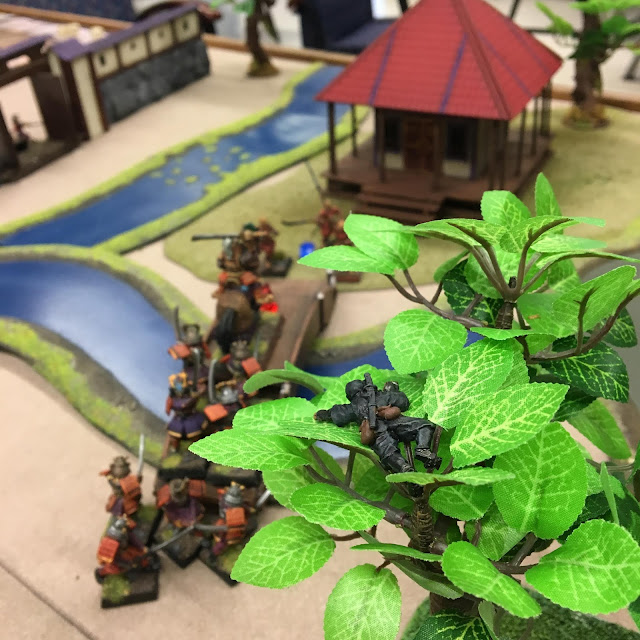 WL Mikobu drove on to the island and ronins also crossed the river, moving towards the shrine with burning torches. 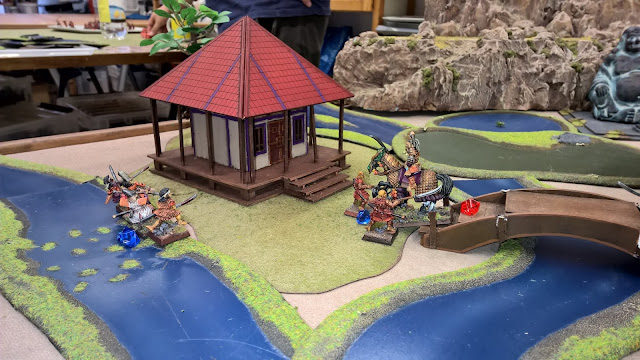 At the last round I tried to reach the Samurai WL with my WL, but his Samurai guard was too
much even for the master ninja!
(unfortunately I forgot count in the +1 to hit from shurikens (= javelins)) 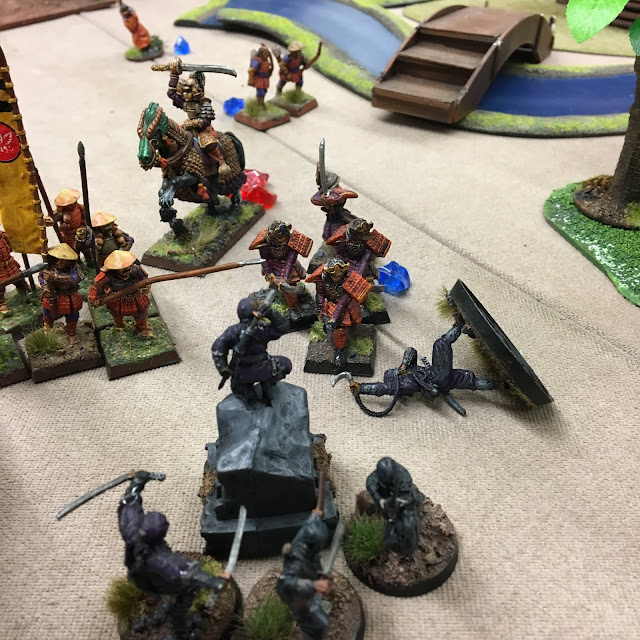 Samurai & Ashigaru forces then moved on to fend of my remaining forces,
whom seemed shocked from the death of their master! 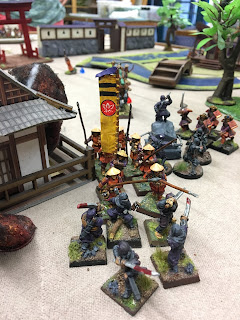 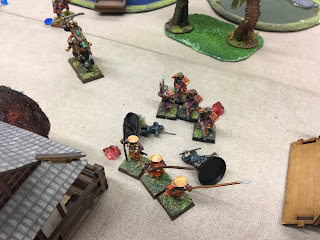