Dalauppror with his warband of Swedish & British sell-swords are already notorious for their presentation games in Salute. As a committed Great Northern War armies collector I was allowed to join in on this crew and so started my "Project Salute"

Me, myself and the Maestro himself!

Read on to learn what this all meant!

The project was well organized; Dala and Jeppan were planning the scenario for The Pikeman's Lament (Dala aka Micke being the co-author and all!), Jan whom is based in UK is the master architect for terrain and all of us painted miniatures for the project. I was asked to produce more wounded Russians and so I did:

It was really nice to paint these characterful minis from Casting Room Miniatures.
And cossacs, here WIP, that are from Wargames Foundry

And from some other producer i don't know, as these are bought from Hamburger Tactica's "Bring and buy".

The Day of Days

On the Salute day we woke up very early and left the hotel with Jeppan so early, that even breakfast wasn't yet available! This is real commitment! So we arrived to Excel fair centre and found our Brothers in Arms there: Micke, Andy and Jeppan in the picture.

Soon the foundation of our battlefield (made by terrain master Jan) was laid out and setting up continued... 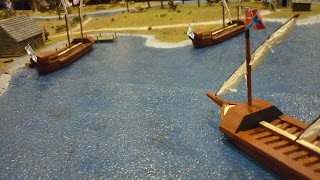 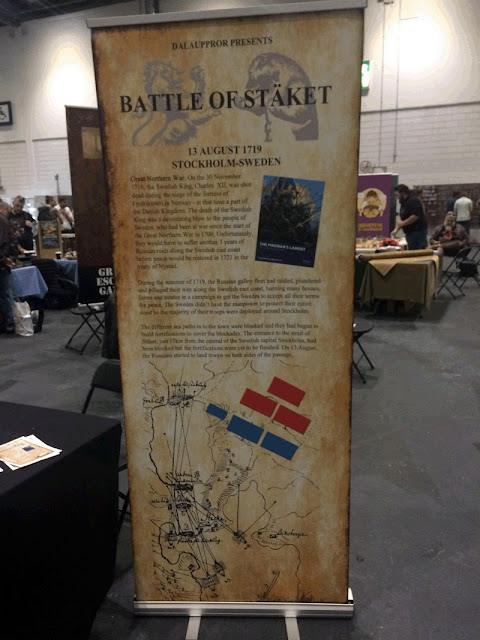 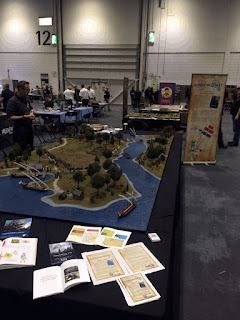 In the end of the day we even got a nomination! 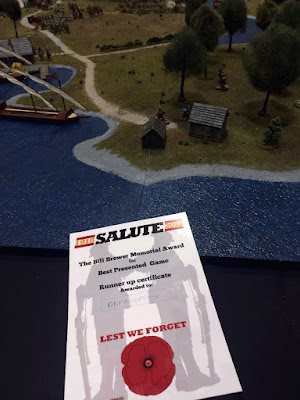 Here's brief introduction by Micke and Jan to the situation 13.8.1719

Map of the battlefield, made by Jan 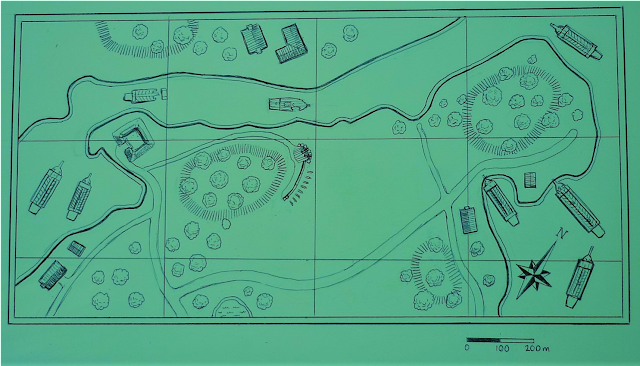 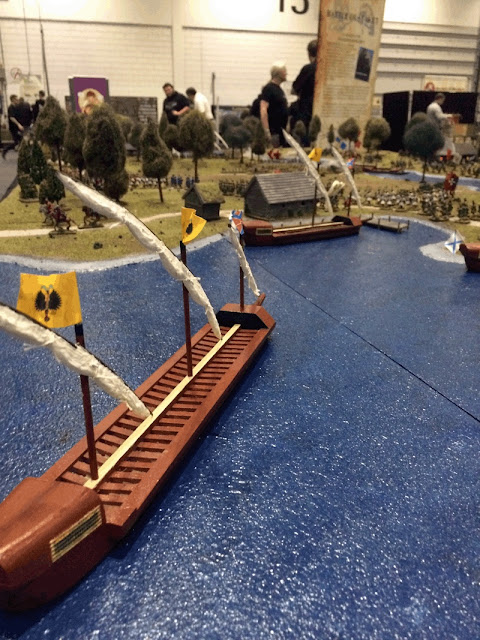 Russian flotilla trying to find it's route to Stockholm 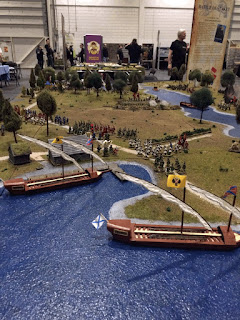 Three battalions (or companies in The Pikeman's Lament terms) ready to storm the Swedish positions. Historically the Swedes defending the fortifications were not regulars, but "tremänning" militia. In the game we simplified things and all Swedes were the same (regulars). 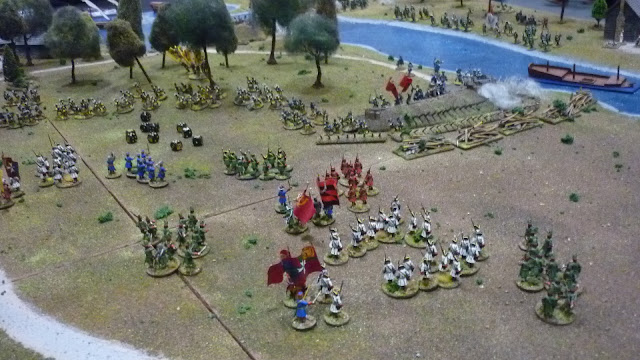 But the Swedish reinforcement reach the battlefield before the
Russians can overwhelm the defences. A fire fight erupts. 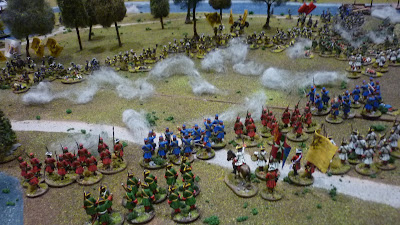 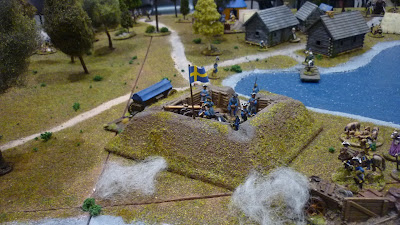 Swedish defences - still somewhat unfinished at the time of the attack 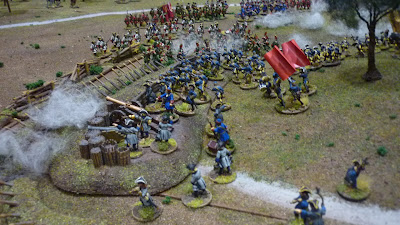 Our game table was significantly larger than what the actual game played needed. Lot of detail and small dioramas were placed everywhere 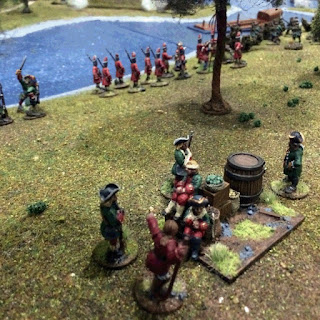 Husband defending his family from the looting cossacks 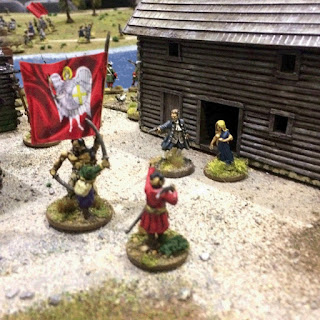 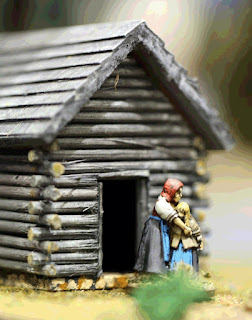 On other side of the gulf two more battalions of Russians were marching to outflank the Swedes, mut their advance was halted by bombardment from the Swedish galleons and artillery positions (miniatures by me) 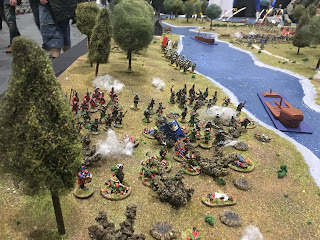 
After some serious shopping it was my turn to run the demo game and fellow gamer Herkko from Nopat & Taktiikka club joined the Russian ranks. I was commanding Swedish forces.

Cunning Russians avoided a head on attack against the defences and tried to sweep from the left.
Luckily the Swedish reinforcements commanded by me once again made it in the nick of time (there were quite a few failed command rolls on the way).

Once again the battlefield was covered by black powder smoke and Russian casualties started to mount up!

As the crowd had left the building games and vendors rapidly packed their stuff and the hall cleared surprisingly fast.

There was a huge selection of demo and display games in Salute, and the competition to be one of the finest was really tough! I certainly think we can be proud of our demo game!

Our game presented in other sources


You can see our game presented by Jan in a Wargames Illustrated's Youtube video here. Presentation starts at 5:39

Micke has made two blogposts on his blog: here and here

It was a great experience to join in as demo-gamer to Salute. We luckily had a large enough team, that everybody could enjoy Salute and be part of the presentation as well. I certainly look forward to what project Micke & co. come up with for Salute 2019 and wish I behaved good enough, that I'm welcomed to the project again!