Celebrating the launch of Rebels and Patriots by Osprley Wargames

Several of us had had the opportunity to do play testing for this new set of rules coming from Osprey Wargames tomorrow! So we clearly had invented a way to travel to future!
Besides us play testers three more mates from club joined in to learn about the game.
Juha and Kalle hosted an AWI battle with and The Lament Ridge scenario from the book.
Me and Marko hosted a Russo-Swedish War 1808-1809 battle of Vaasa, that took place 25th of June 1808. This was also the next battle in our related campaign, which has been on hold for a while.

We started the event by distributing recently arrived rulebooks for play testers and then having a video call with Michael Leck (aka Dalauppror), co-author of the rules. He was at their club in Stockholm. We showed our tables and club and expressed our congrats on the publishing of the game.

The Battle of Vasa was fought between Sweden and Russia during the Finnish War 1808-09.
While the Swedish army was celebrating its victory at Nykarleby, another Swedish force, led by Johan Bergenstråhle, landed in Vaasa. Adlercreutz had forgot about this landing and didn't send any troops to help Bergenstråhle. The Swedes, numbering about 1,200, landed just outside Vaasa, but the Russians, strengthened by th arrival of the retreating Russian main army turned out to be too strong. About 1,000 men managed to retreat northwards after some harsh street battles. The Swedes then joined up with the Swedish main force in Nykarleby. The Swedish commander Bergenstråhle was captured by the Russians.
Based on the historical events and forces I made up an OOB for Rebels and Patriots, find it here
Idea in short: 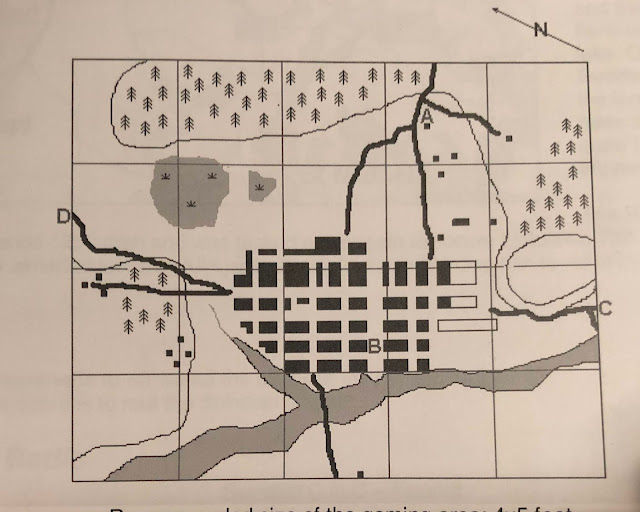 Swedes get the town into their sights

Russians hastily put up some barricades and prepare to fire!

Enter the town and engage!

As the Swedish forces entered town, two things were triggered: Vaasa Militia would start to appear at 4+ on D6 roll and small Russian reinforcement force would arrive from C (successful command was needed to enter the battle field)

Swedish Jägers had outflanked the Russians and their fire drove the Russian light infantry back and into hiding, while cannon fire had destroyed part of the barricades

Situation after about 4 rounds; 1 Vaasa militia is firing from the cabin with yellowish roof and Russian reinforcements are approaching the town

It seems, that the players are enjoying the game!

Russian line infantry takes cover behind a building, but are "ambushed" by
the Swedish Jägers

Will the reinforcements make it to the town to help their comrades?
Game hangs in a balance

As the game reached it's 6th round, the Russian main force arrived from the point D

But their fellows on the other side of the town were taking heavy casualties... 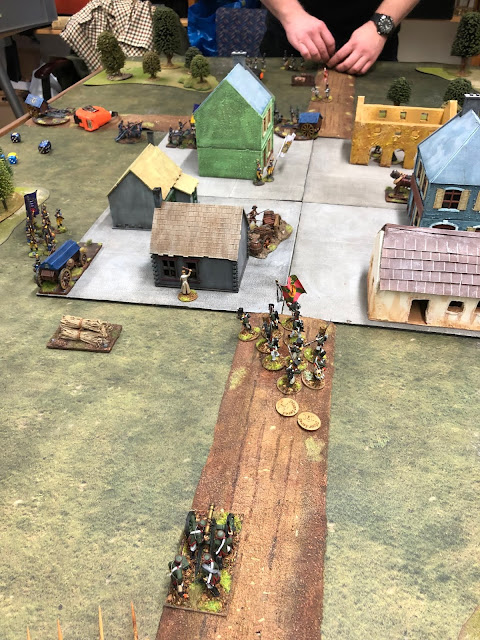 Swedes and Vaasa Militia had practically taken the control of the town and Russian reinforcements had been denied the access of the city. Still the Russian Jägers (light infantry) was lurking in the outskirts of the town. Swedes needed to push them out of the town and keep new forces from entering, in order to win the day...

Demidov (above) lead his men into an assault against some Vaasa militia defending the yellow building, but they were repelled...

Another Militia failed it's command and hence there was nothing we could do to smoke the cowardly Jägers out of the town!

10 rounds of fighting had been completed and Russia had won, final score was:

We had a good time, scenario worked fine (I did some fine tuning during the game).
If the Swedes could have ousted that one Russian unit out of the town, they would have won 7-4, but it was not to be. Game flowed well; it was about a year since we had been play testing this, but the rules came back really fast.
I must say, it's a great set of rules and of course us play testers have been totally awesome!!!

More pictures on the AWI game in Juha's post