A while a go I played this large ASOIAF TMG battle against Mikko, it was kind of a thematic game: The False King Joffrey was defending the walls of King's Landing against an assault from the Northern army, lead by non other, but the King of the North, Robb Stark! Our scenario was Storm of Swords, which is a kind of siege scenario. 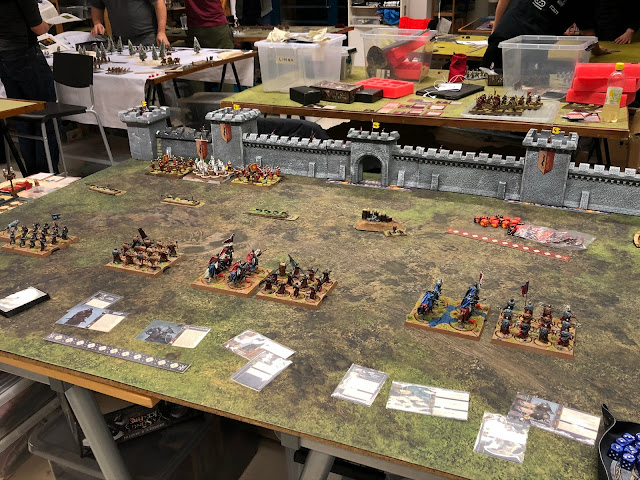 Lannisters had prepared well for the battle and the King's Guard with Joffrey himself
held the choke point against the invading army (Lannister only had half of their army on the field
at the beginning of the battle. 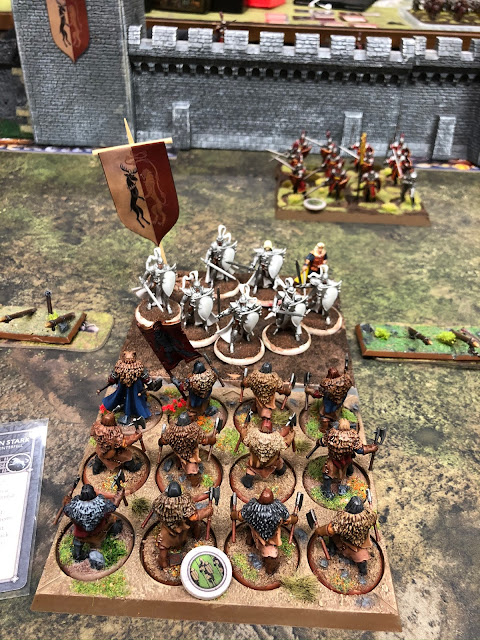 After Umber Berserkers had a go, it was time for Tully Cavaliers to make a daring charge
to their flank, sweeping near the deadly stakes... 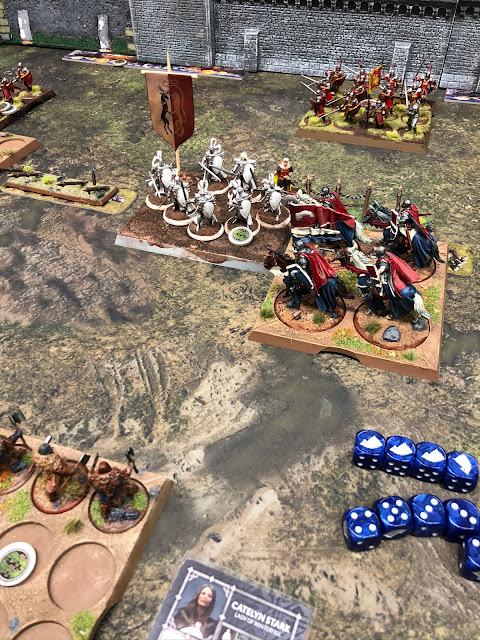 And only Joffrey and his true father were left standing
(still with 8 attacks!) 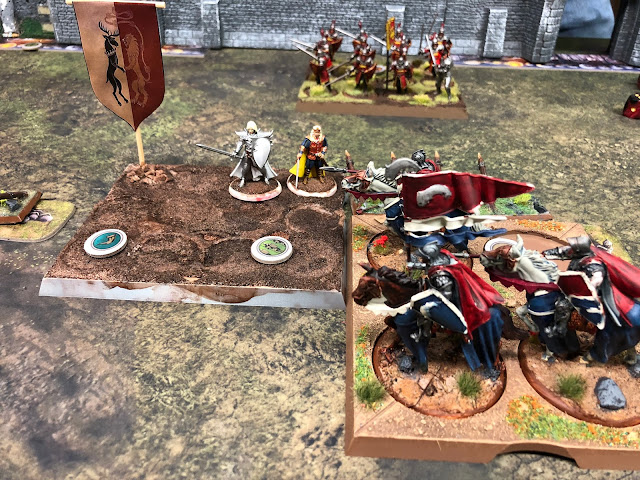 In the mean while Robb had reached the wall with his
invisible Umber Great Axes body guard... 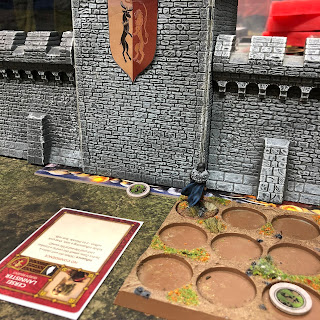 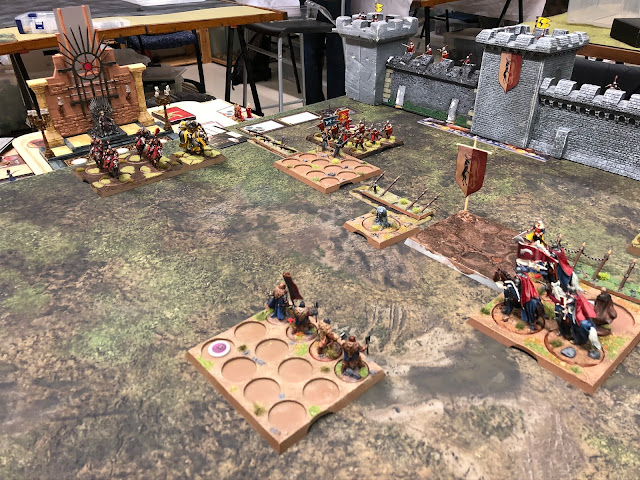 King of the North is in grave danger... 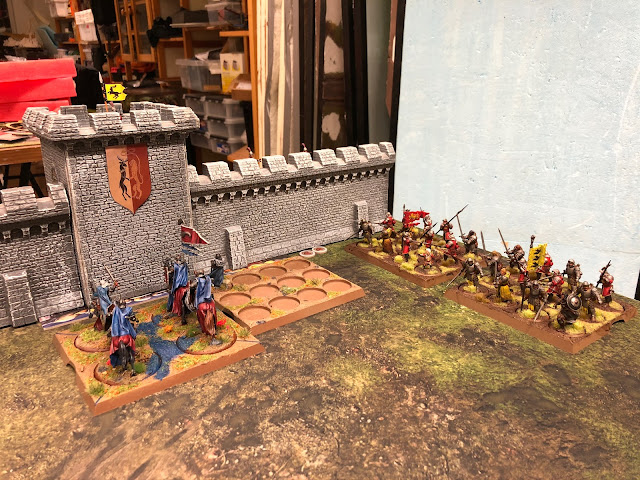 Grey Wind is also trying to finish what Arya's dire wold started... will the Mad Dog Clegane be fast enough to save the false king? 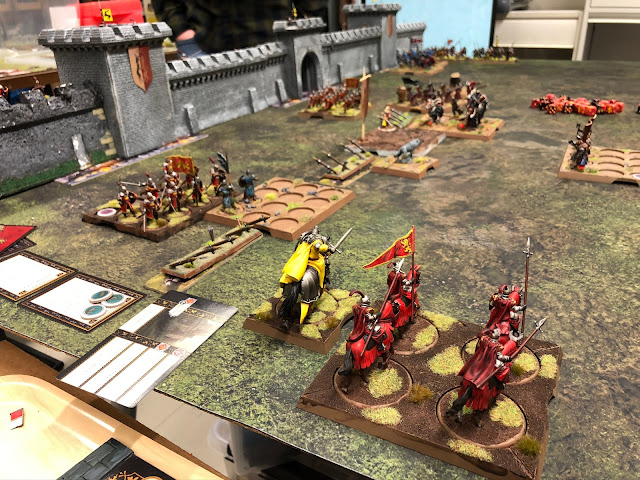 In the mean while. Robb had played some retreat shenanigans and attacked one of the Mountain’s men units, but it was just a last stand and soon King of the North was over come...
Even Stark Outriders arriving from outflank were not fast enough to help him! 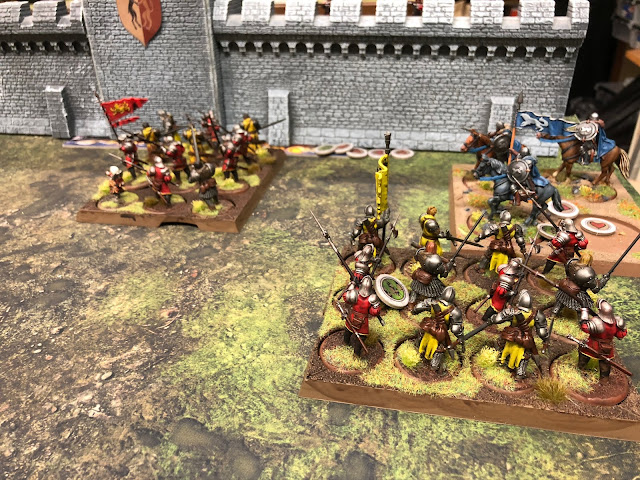 But this sacrifice was well timed as a unit of Greatest of Axes was able to re-deploy and
Charge KOTCR! My axes held them at bay nicely. 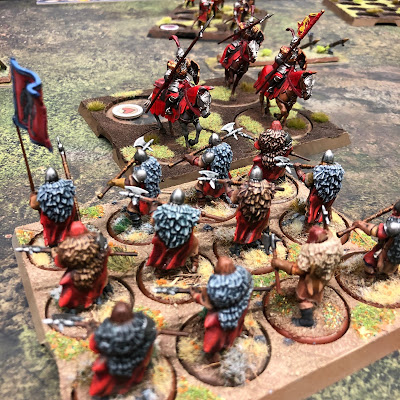 In the final moments of the battle two wall pieces were destroyed one after the other:
Tully Cavaliers charged the right flank wall section, that only had one "hitpoint" remaining, easy job, but the middle part was a cunning play from Starks (aka me): my Cutthroats with Maege Mormont had charged the wall, but it still had 4 hitpoints remaining. Then Mountain that Rides charged them in the rear, one might think, that this would be disastrous, but no! 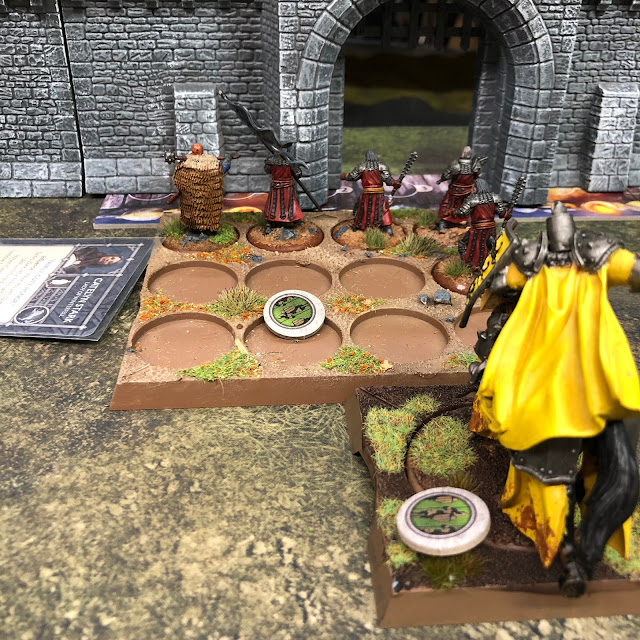 After Mr. Clegane had decimated seven models from the unit and it was time for the panic test at -2; I played Direwolf's Fervor Tactics card: 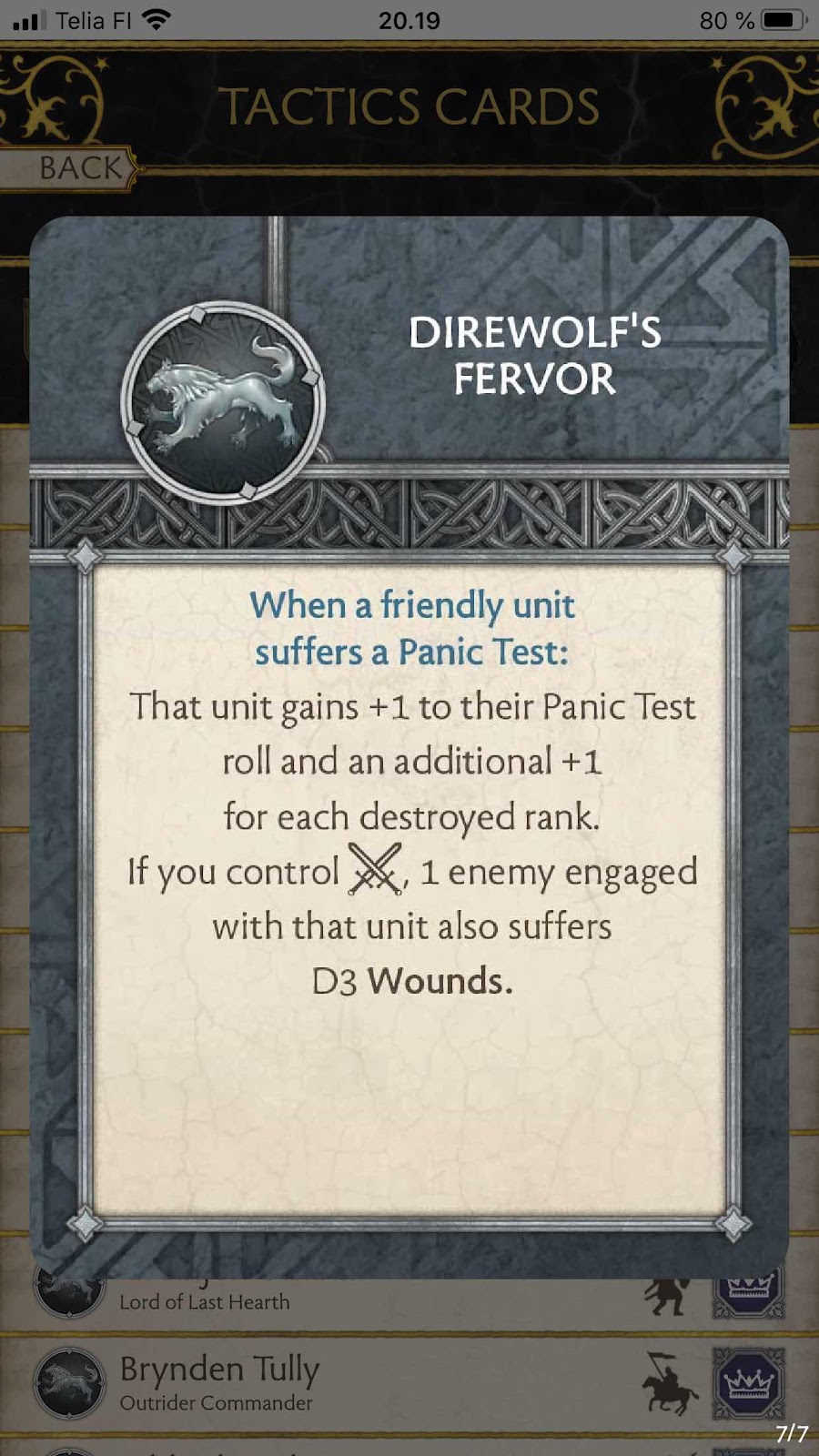 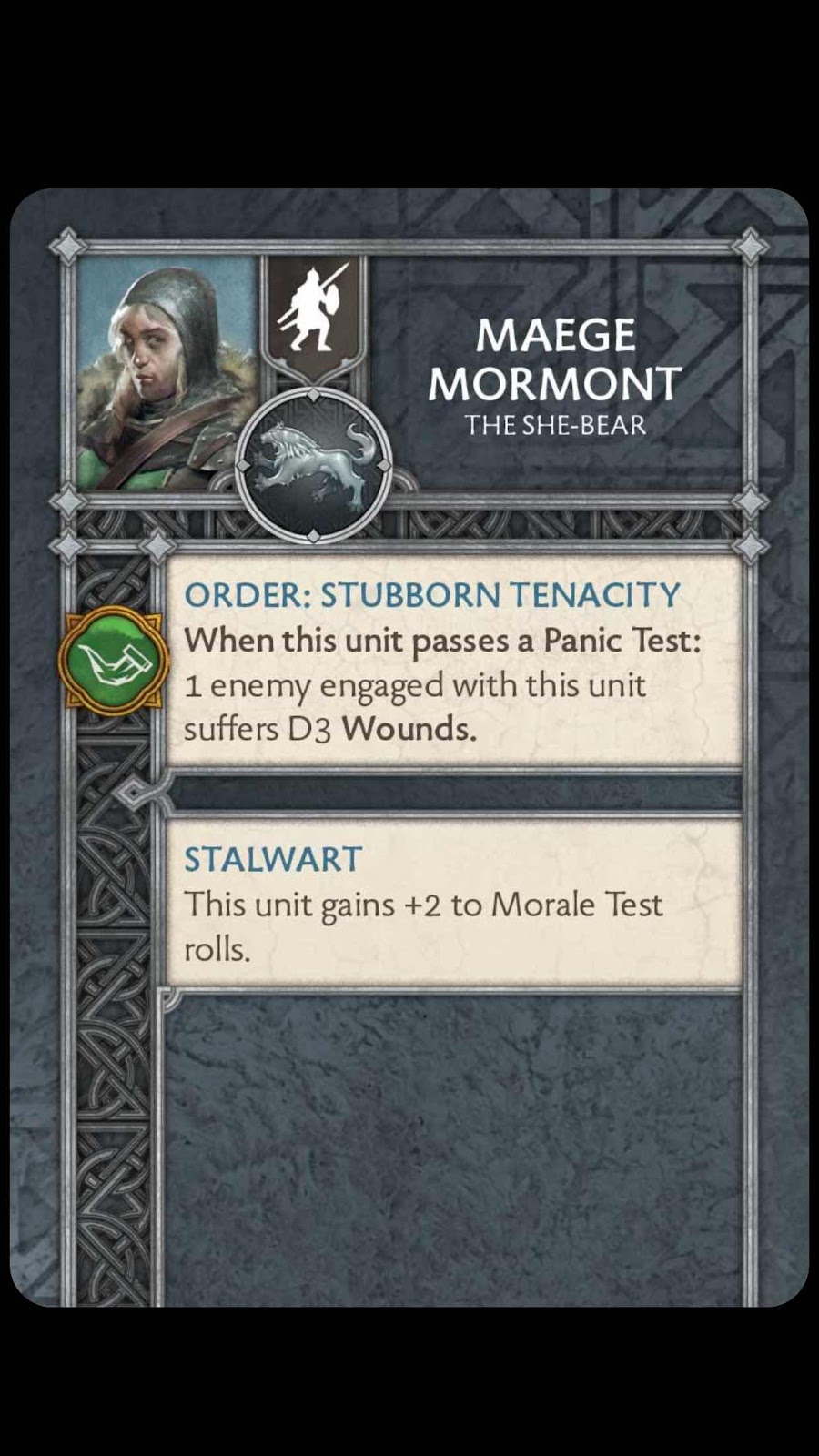 This gave me +2 to my panic test (as did Maege too) and as I controlled Swords on the Tactics Board I was able to dish out D3 wounds AND another D3 wounds from Maege's Stubborn Tenacity order! For a second I actually considered to kill the Mountain, but then, in a flash it came to me: I can take down the wall! So I rolled 2D3 and the wall came crashing down!

Destroying two wall sections in a row secured the Victory for my brave Starks!

King's Landing is ours!

This battle was part of ASOAIF Game Night I had organized... 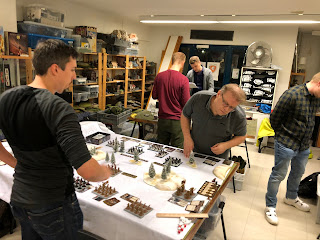 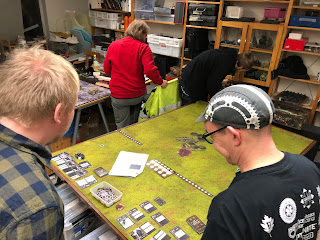 Heikki and Mika prepare to dish it out 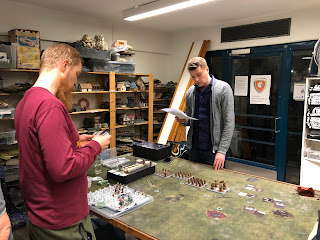 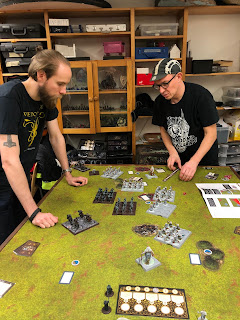 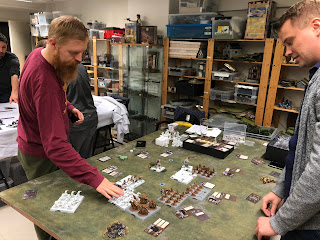 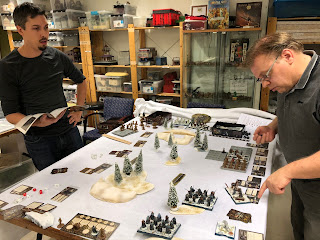