As the fifth round of our map based campaign started, I was challenged by Mikko, of House Baratheon, to  battle for King's Landing. In our campaign KL gives the player controlling it +2 campaign points and hence it was quite critical... so, gloves came of...

How to kill Baratheons?

Well, a pretty obvious choice is with something that punches through their thick armour. That something in current Targaryens is Unsullieds. 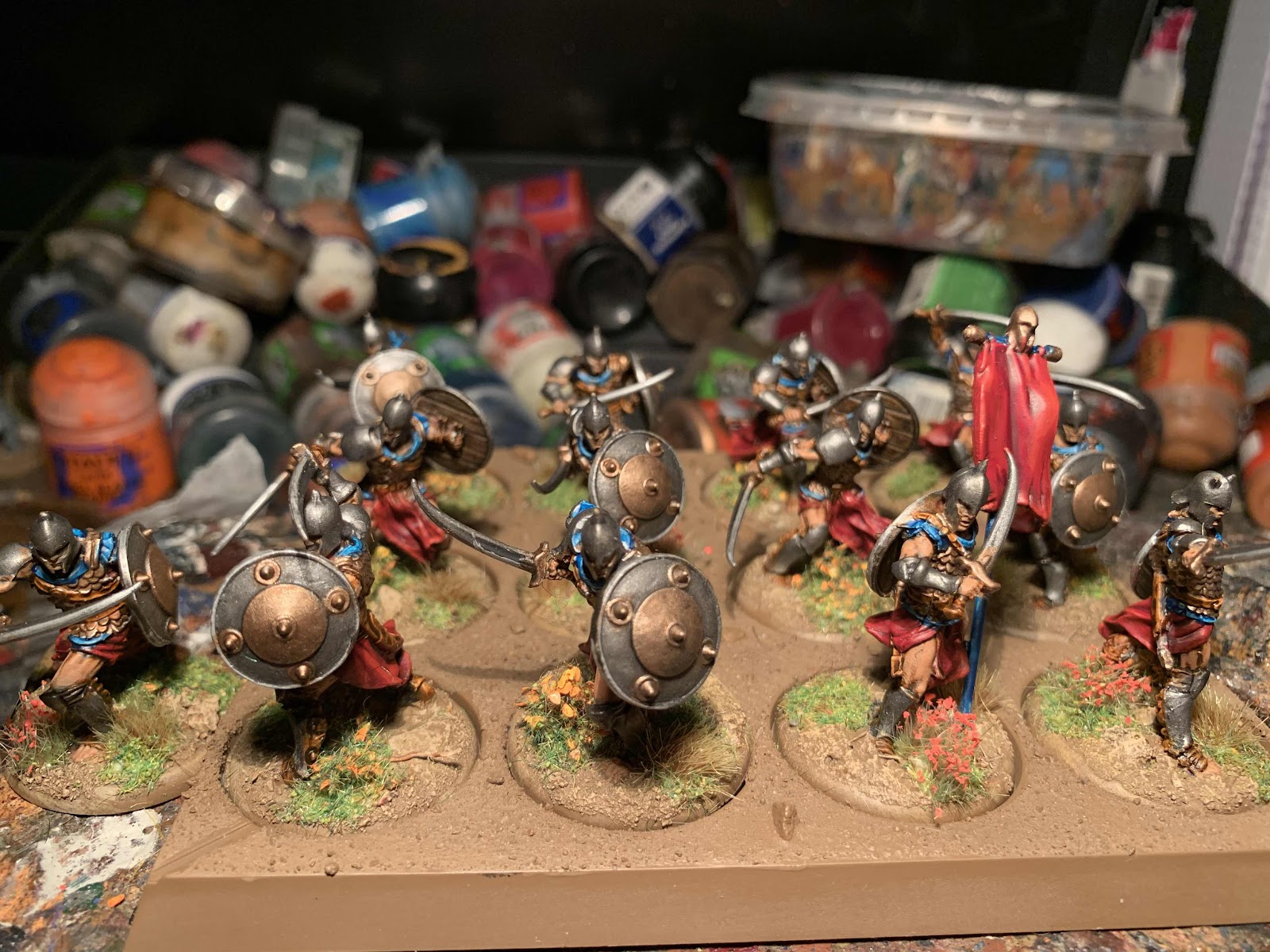 Mikko, of House Baratheon, had chosen the "Dance with Dragons" scenario for us, so that, and Baratheons in mind, I had built the following list:

This is an extremely elite army of 53 points (as the campaign leader I have a 5% bonus to my army), with two units of Unsullied: one with Daario to give them more survivability and one with Roose to add extra panic punch. Zorse Riders are there to shut down Baratheon counter cards, while other units hack them to pieces (hopefully). Dothraki Vets are a very good unit if used properly - might be challenging to get them moving and charging enough to get enough value out of them. Cutthroats are a very good 5 point units, with good abilities against Baratheons.
NCUs: Petyr to take / deny needed zones and do something, that suits the situation better. Tycho is there to heal my glass cannons and finally Illyrio is an affordable NCU to give my elites a one extra activation.
This army is a hybrid army: some very  good infantry units to take and hold objectives, while my two cavalry units would either support them with flank attacks or go hunting slow enemy units sitting on objectives (movement 2). Earlier on I had chosen the same scenario with a far more aggressive approach: never mind the objectives, just charge and wipe out the enemy - and this tactics had worked very well with Targaryens, one example here.
I now chose this hybrid strategy, because

Mikko's army was also a very elite army too. It was also a bit min max, compromising of 3 Rose knights and two Stag knight units. His army was this time lead by Renly Baratheon, Lord Paramount of the Stormlands. New hero boxes have given Baratheons a plethora of new options, making them far more powerful than before! At least I didn't have to worry about the terrifying Melisandre, whom had burned my Starks the last time we faced off. All of his NCU's provided help in Healing his Baratheons: Tycho Nestoris, Courtney Penrose and Margaery Tyrell

As campaign effects we had chosen the following:

Of course my plan was to win the battle, but in the worst case scenario a narrow defeat would also stop Mikko from conquering King's Landing as he needed to make a naval invasion on the map and three Empire points from a narrow victory (three VP margin) would not be enough... 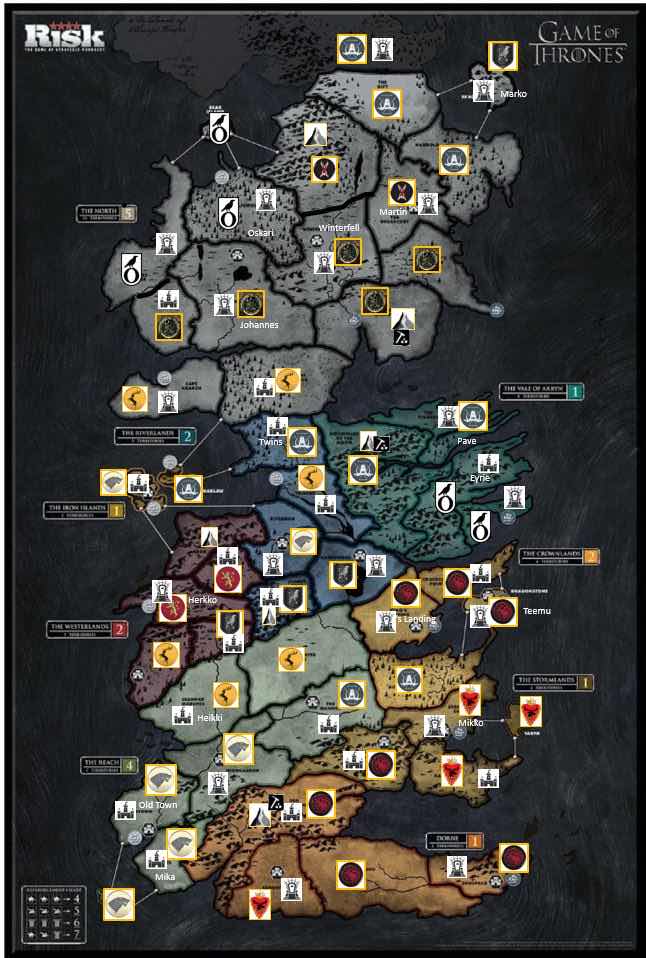 With a strong cavalry element in my army I was extremely pleased to have Mikko deploy first. He focused to his right flank - facing the "Nullify a NCU" objective. Renly was also there in a unit of Roses. One Rose knight unit faced the centre objective and a third one was quite alone in his extreme left, facing the third objective. 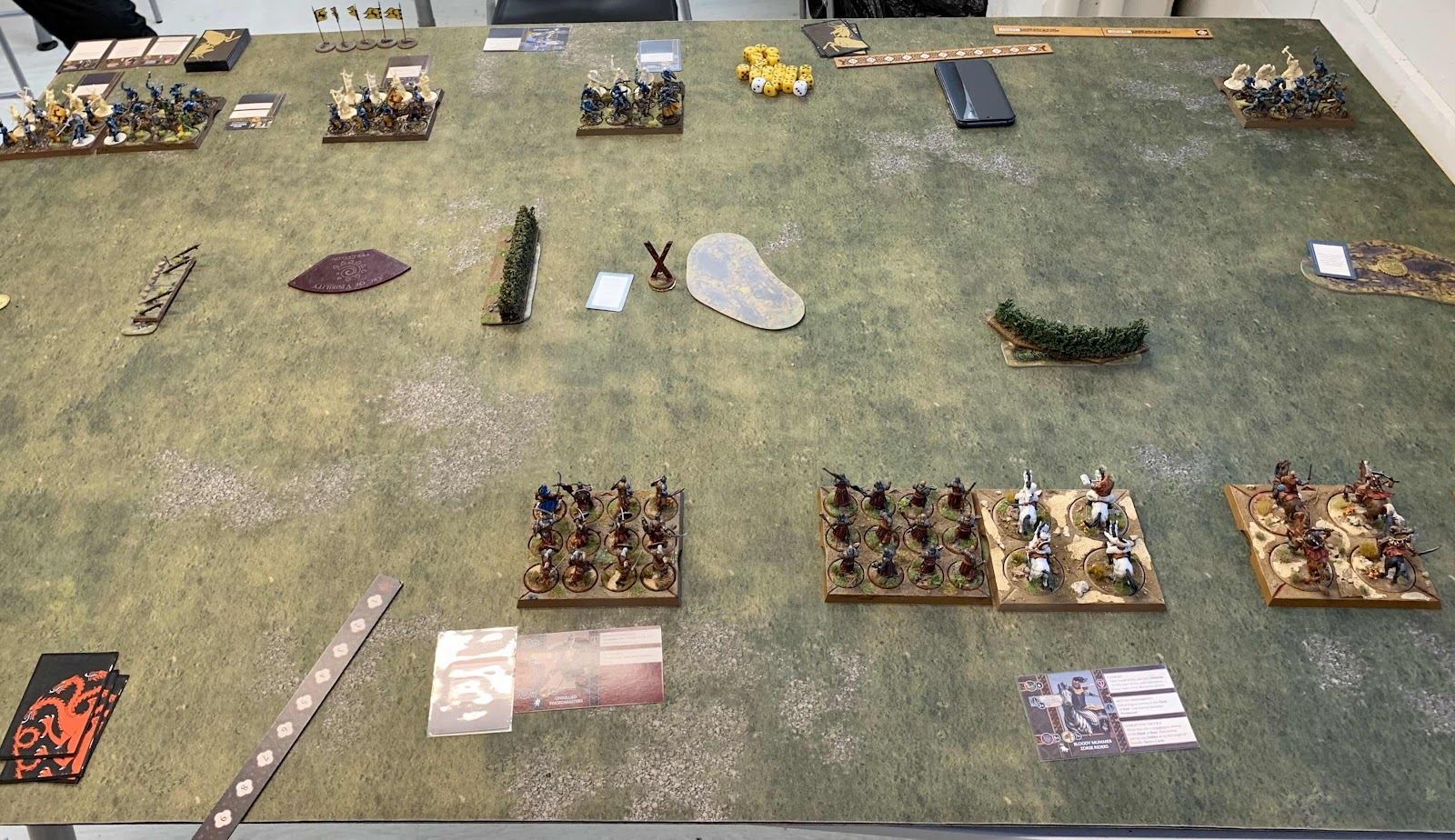 As Melisandre was not in the play, I decided to forget about the NCU objective and focus on destroying peace meal his separated units in my left flank and in the centre. Roose-Unsullied and Veterans faced the lone Rose knight unit in my left flank - thats 21 points facing his 9 points (Roses are 7 + an attachment). This left my three other units to fight for the centre, where I expected fighting to be hardest. I would need to claim the money bag to have Daario boost his Unsullied unit... 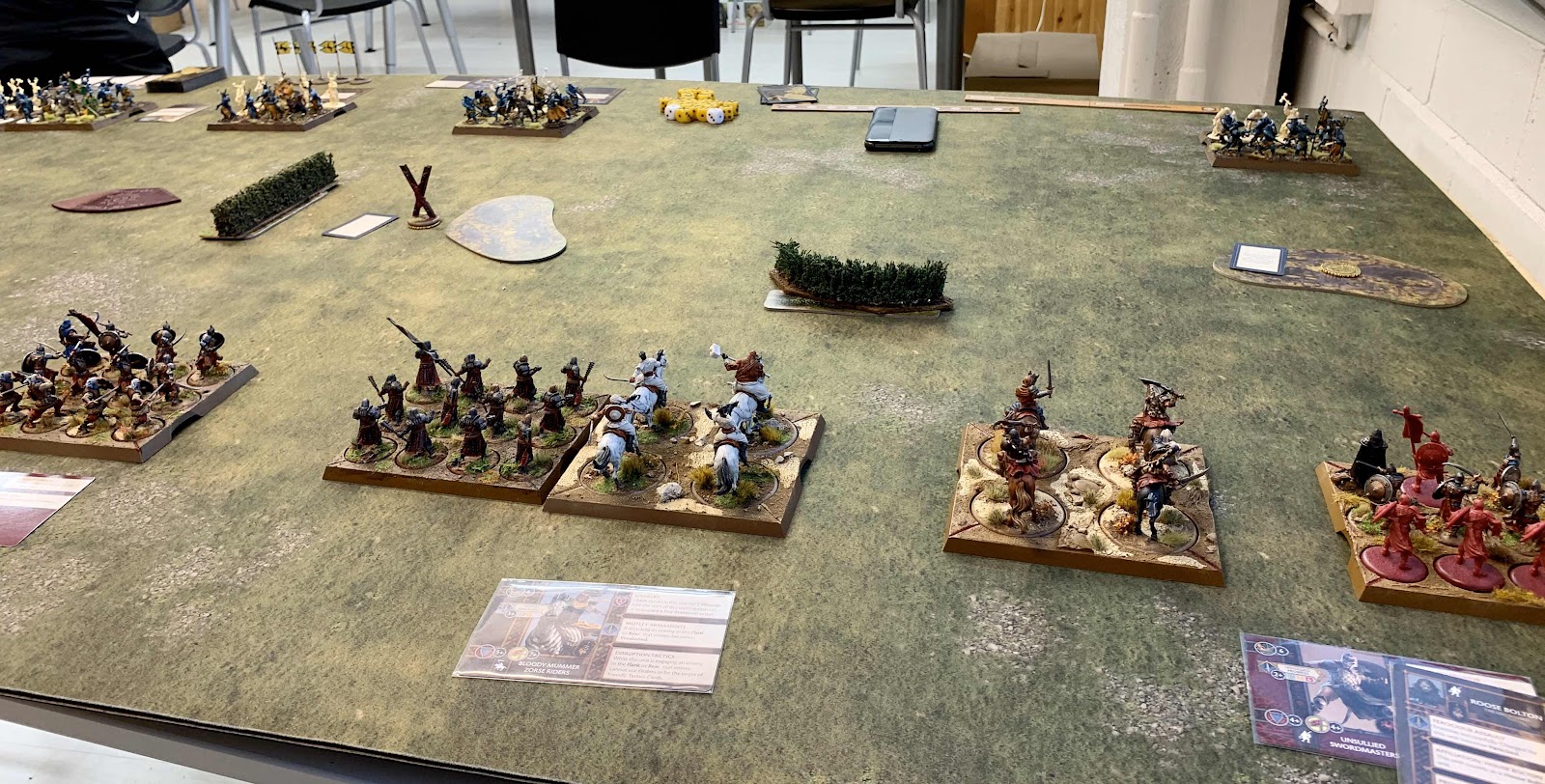 Baratheon battle line close up. Renly in green and Brienne ready to defend him! 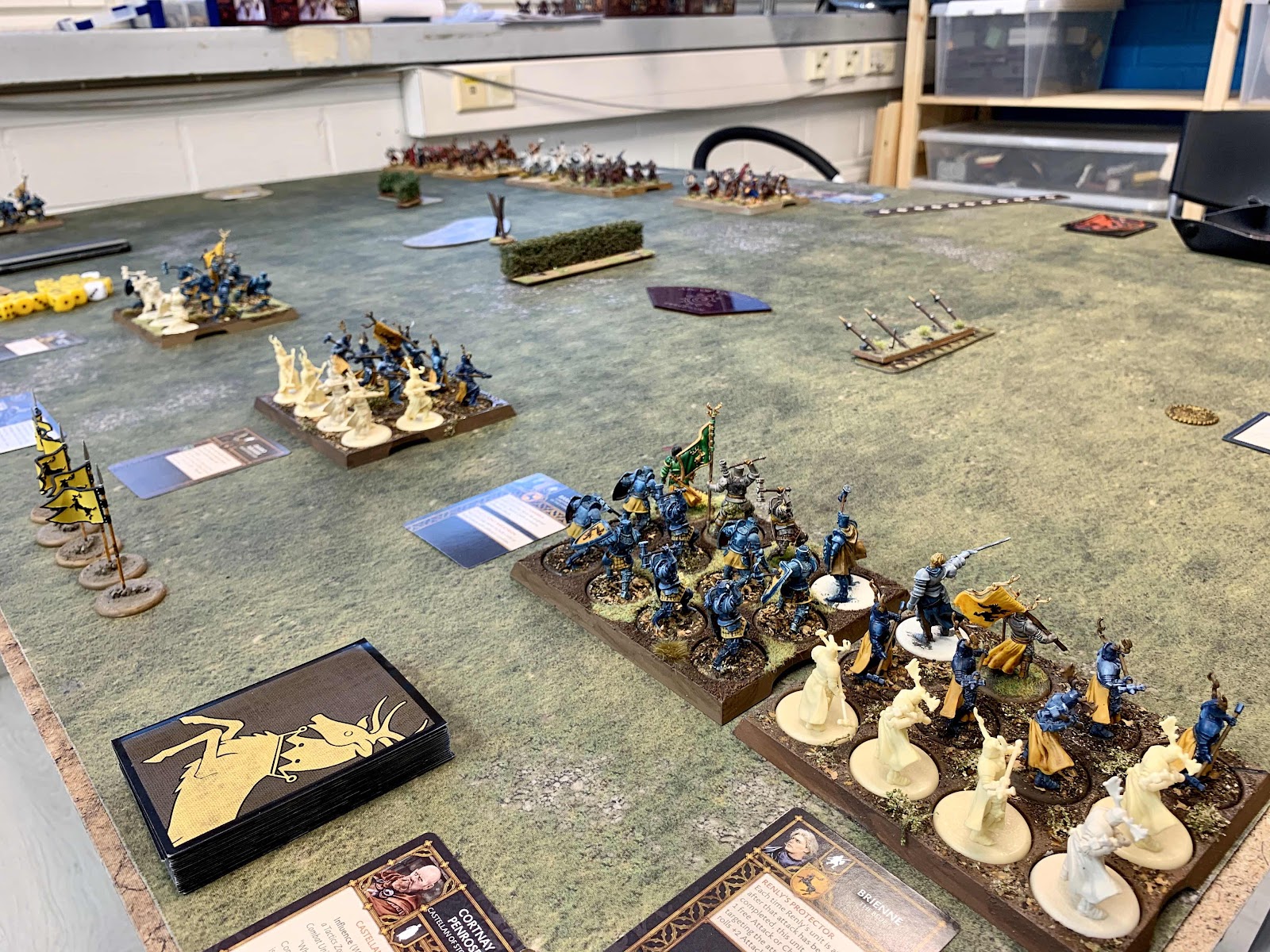 I started the game by claiming the letter to build up my hand - Targaryens really need their cards to perform and survive (free retreat with 6 cards). Early moves saw Roose-Unsullied fly (speeded up by Unstoppable Advance card) to the objective in my right, but main focus was manoeuvring in the middle...

There I could have reached the central objective with Daario-Unsullied, but I was a bit (too) scared of going that far, as Baratheons would go first on Round 2. This was a mistake, I think. My commander should have taken the objective - giving me the chance to get 3 points from objectives against Mikko's two - Renly was sitting on the right flank NCU objective - nullifying Illyrio.

Zorse riders (still without stripes) moved to flank the Rose knights - how could they stand against this combo of Daario-Unsullied-Zorses? 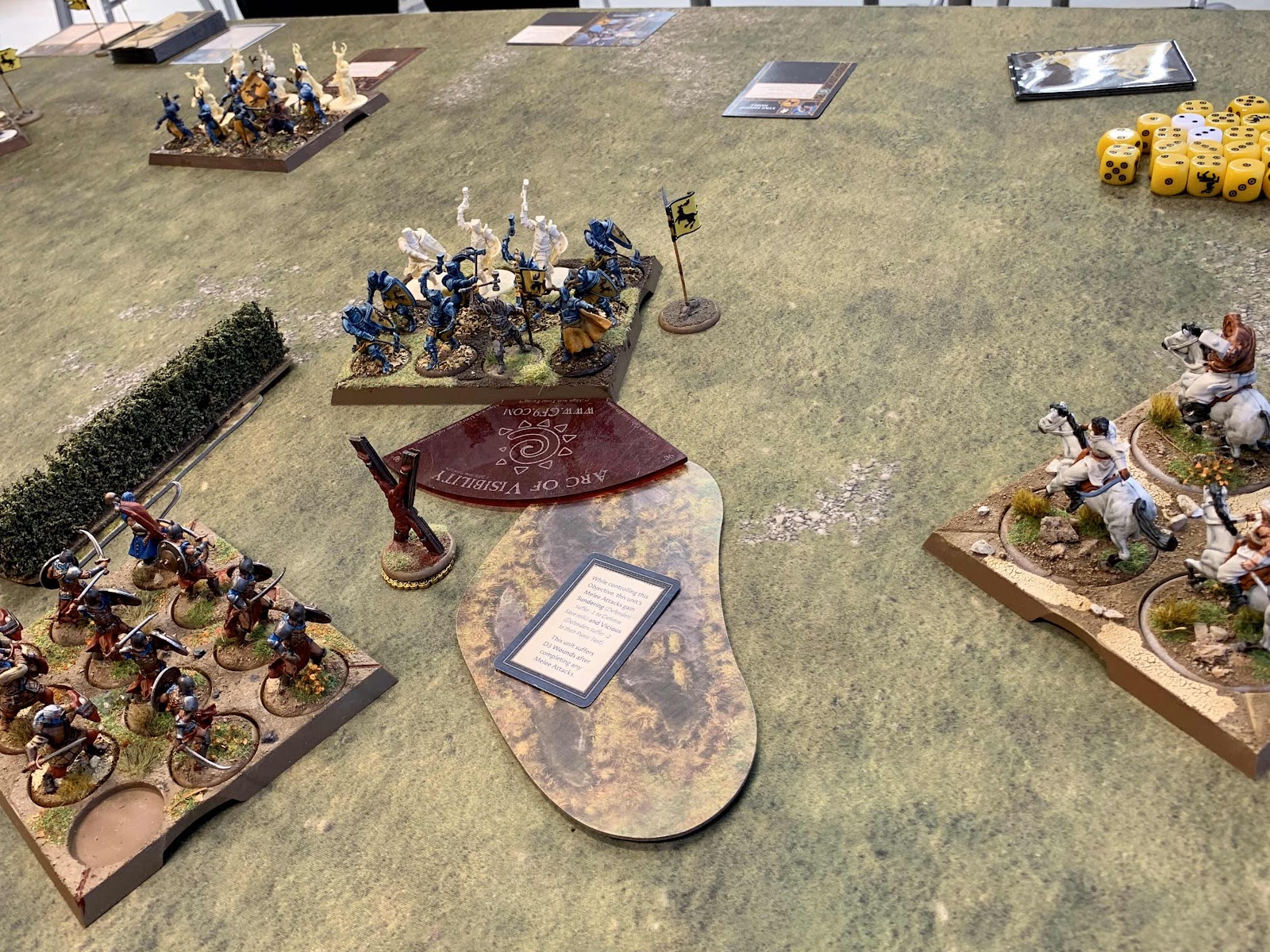 Round 2. Challenging the Roses 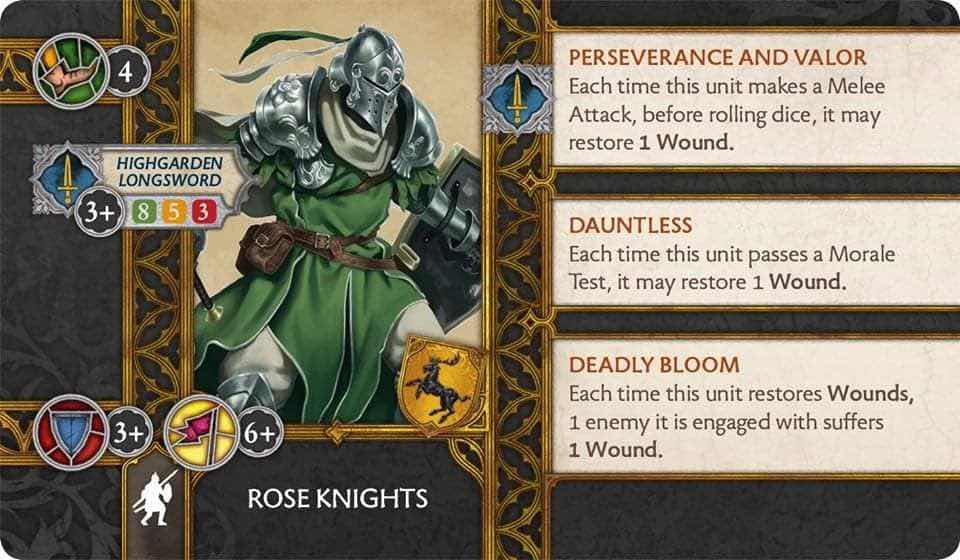 I had Forced March card in my hand (Daario's TC) and as the second round started, I marched Daario-Unsullied to flank the Rose knights, whom were now threatened by three of my units, this really looked good - even if more Baratheons were now moving closer from their right flank.
Unsullied and Forced March really work well together, as Unsullied don't take tokens! 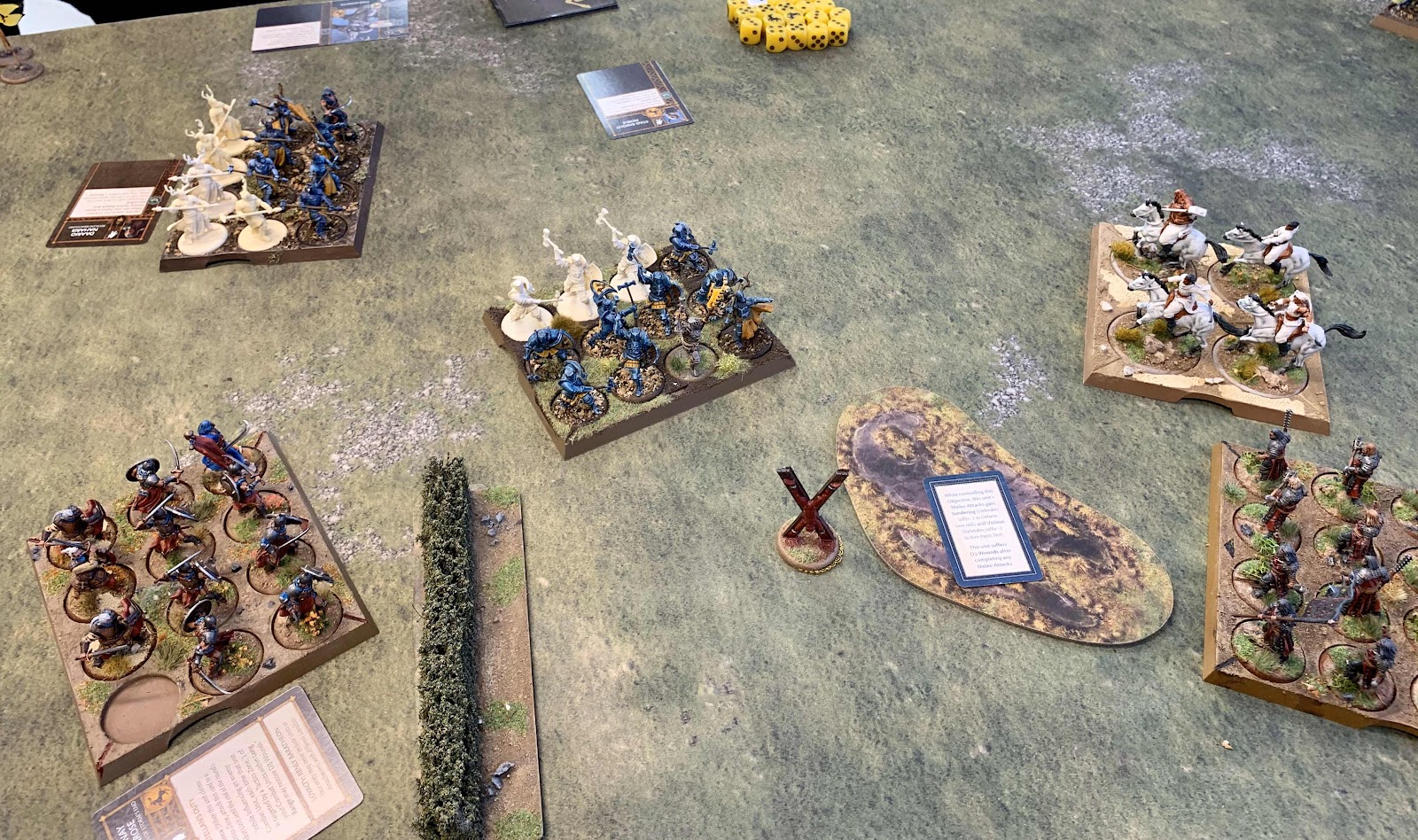 So a charge was declared, but unfortunately I rolled a 1 and was disordered. Now I started to regret I had used the Unstoppable advance on the first round - it would have given me a reroll for charge distance. All of my attacks hit anyway, but not a single 6 to give me those much needed precision hits.So only 4 knights fell and one was then again healed back by a successful panic test, causing a wound to Unsullied. 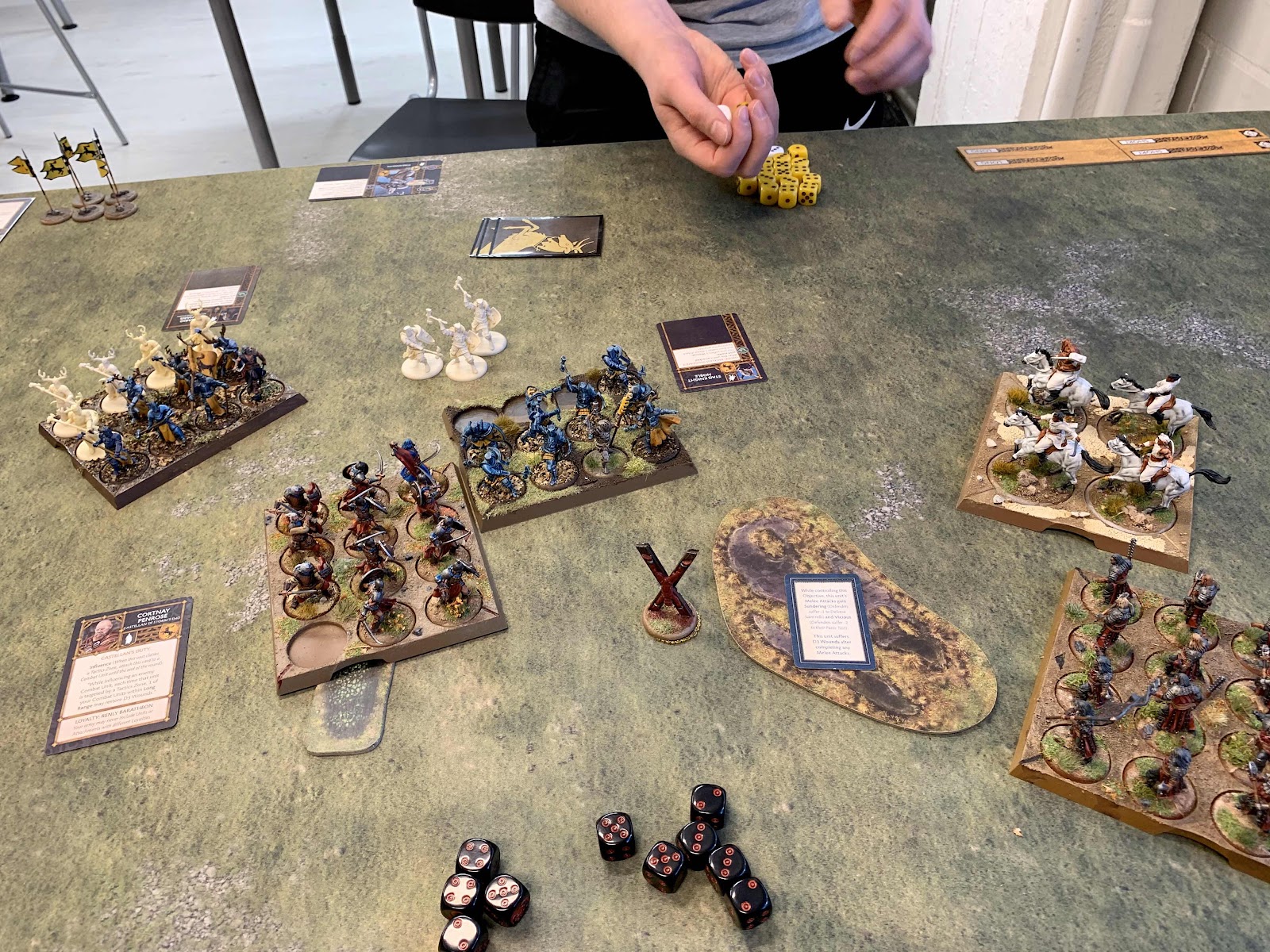 As my Zorse boys weren't there yet, Mikko used his Stag Knight Noble's order to counter strike, him loosing only one wound, because RK, and bashed several Unsullieds. I then charged in with Zorses, but RKs kept healing faster then I could kill them!!! And whenever he could cause a wound on an engaged unit, it was to Unsullied. After RKs had activated and bashed more of my Unsullieds, I had three men left standing and RKs were full!!! WTF!?! This was damn frustrating!!! I got two flank charges in and MY FACE got smashed in!!! If I remember correctly Mikko also used Tycho's once in a game ability to heal 5 men back.

To make matters worse, my Daario-Unsullied now faced an imminent destruction
in the form of Stag Knights bearing at their flank... 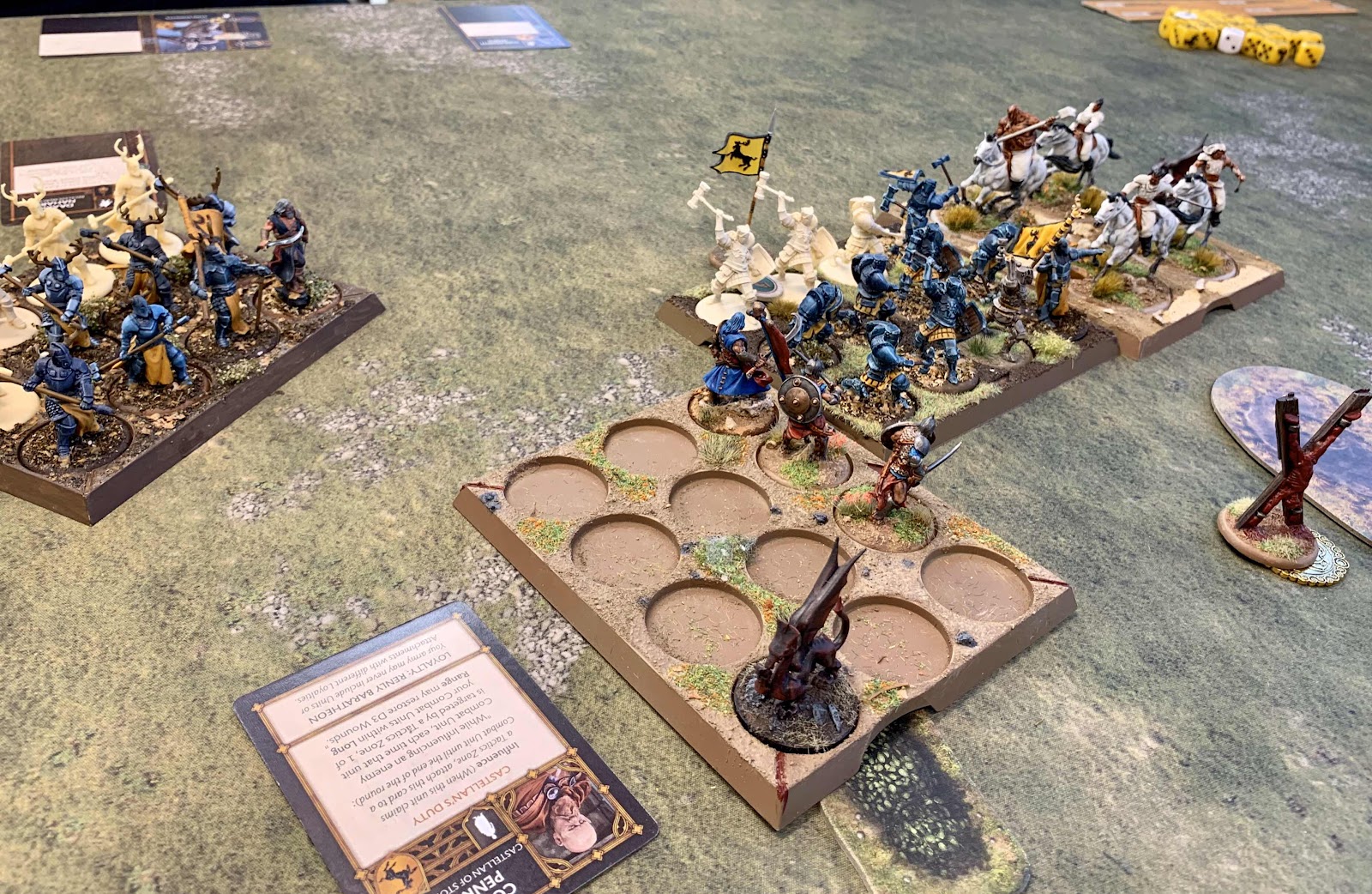 Fortunately Mikko didn't prioritize this and I was able to take more cards and got "Fury of the Dragon", which I used to retreat Daario-Unsullied from the harms way, huh!
My Cutthroats then moved in to claim the central objective and we both scored 2 points from objectives as Renly was controlling one and I had two. My initial try to take out Baratheon units with a combined attack from units had failed, but at this point I had to continue with this plan and try not to lose my units in the progress! 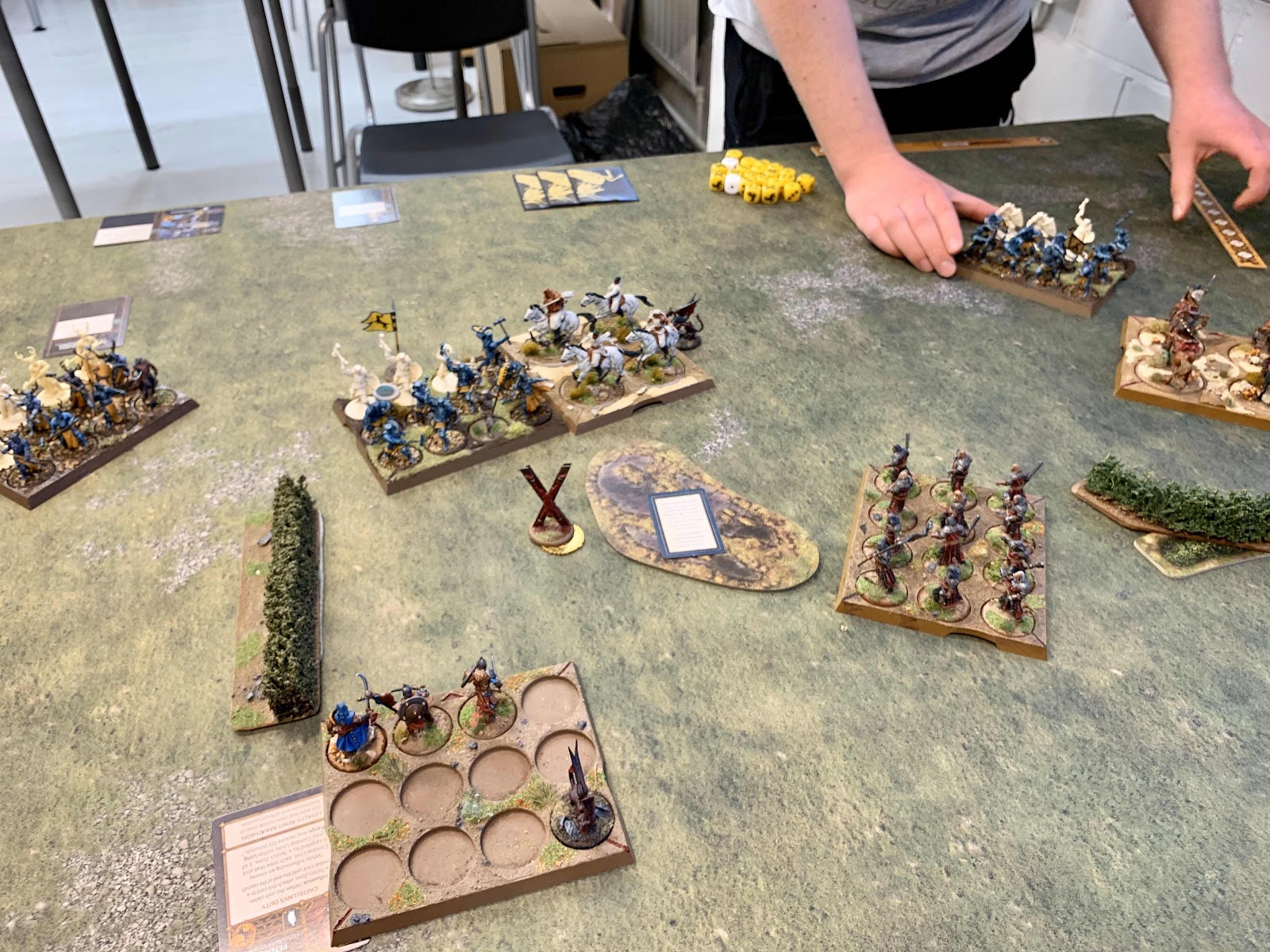 Unfortunately I was not able to stop the avalanche of Baratheons... Stag Knights with Daario attachment had marched towards my Daario-Unsullied and before I had the opportunity to heal them, they charged in smashed them - Daario was killed by Daarioa! 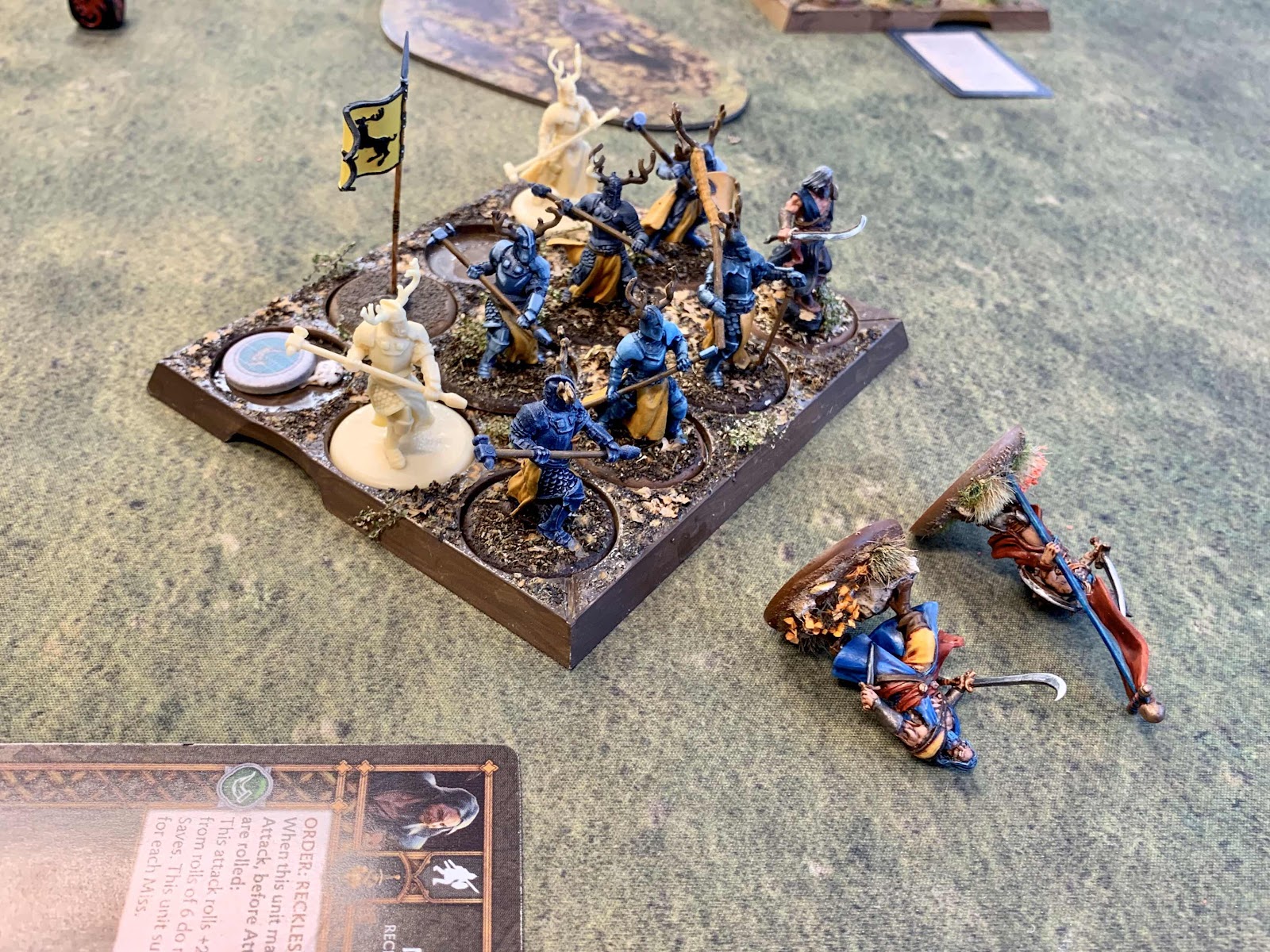 My Cutthroats (with an objective) then charged the Stag Knight to revenge my fallen commander, but could not wipe them out (they also passed their morale).  My Cutthroats were then counter attacked and attacked and to no ones surprise died and panicked to a last man, yielding the objective token to Stag Knights! Now it really started to look bad! Can't these Baratheons be killed at all? 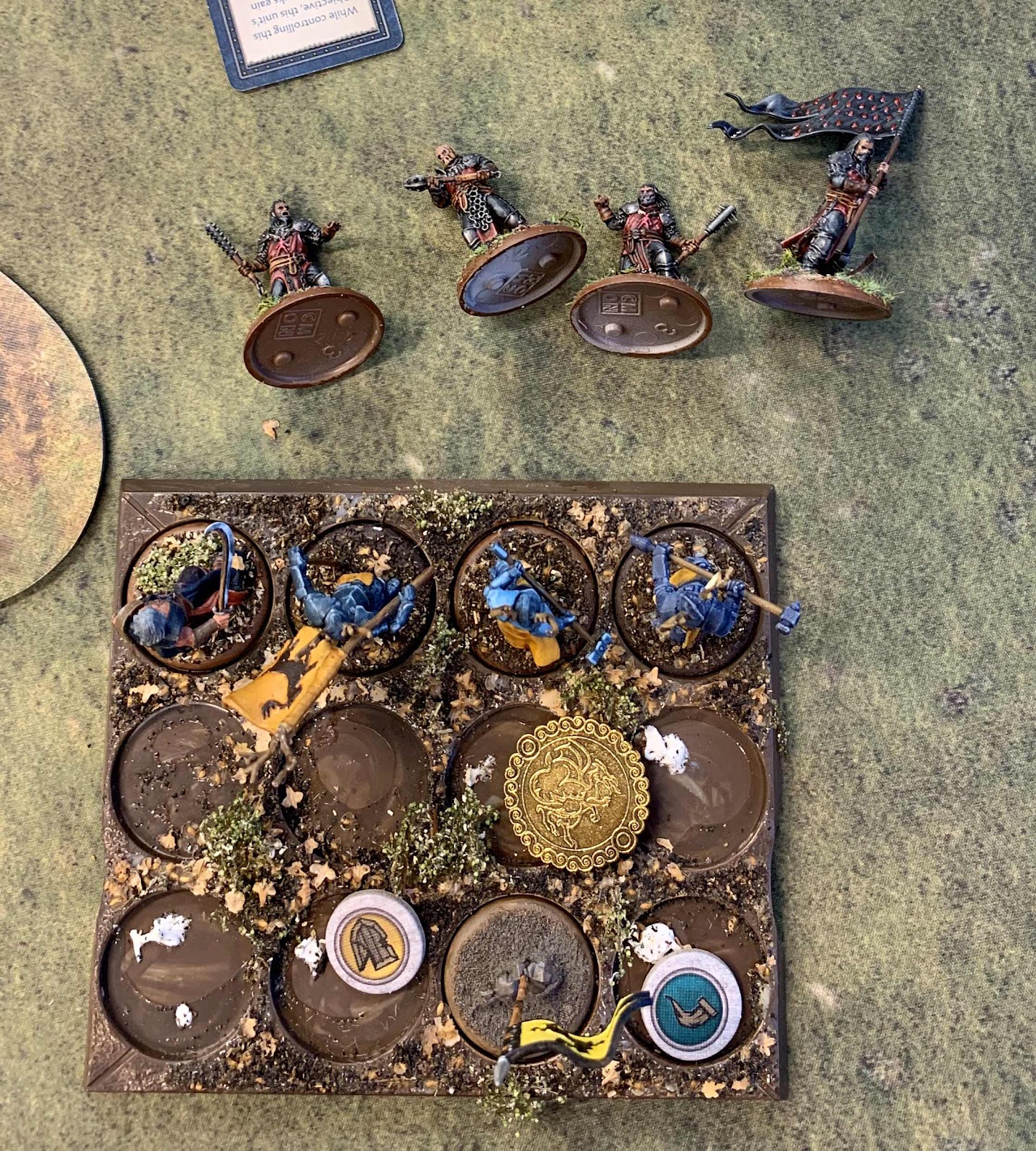 While my centre was collapsing I had finally managed to reach the lone RK unit in my right flank, even if my Roose-Unsullied only had movement of 2".
Zorse boys had also moved away from the hopeless centre and were moving in...
Unfortunately their long bomb charge failed to reach the enemy rear. This would have probably finished the RK unit! 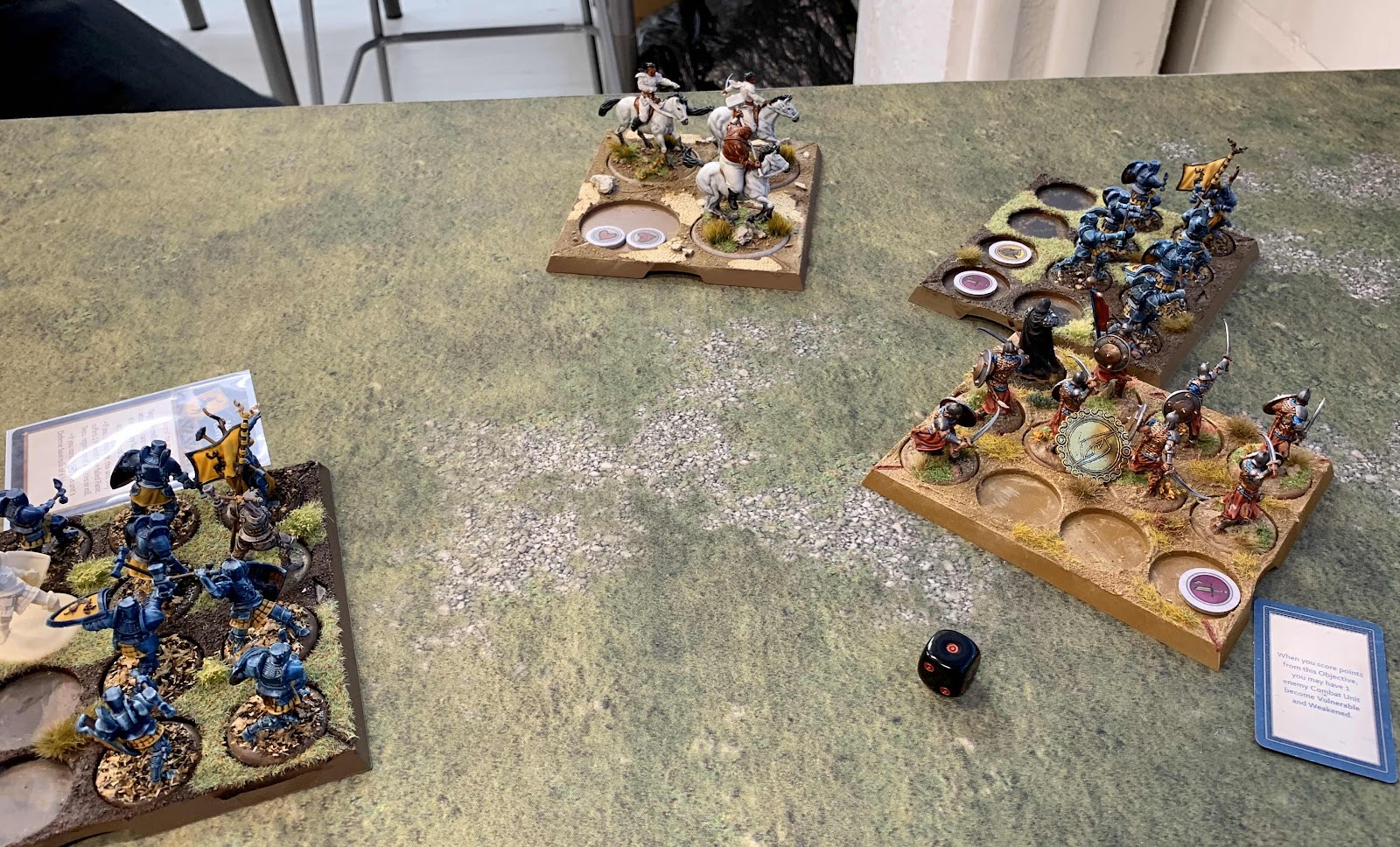 So Roose-Unsullied did so, but this delay caused my units not to have a change to anything else before the game would end. Only exception to this were my Dothraki Veterans, whom had already moved away from this fight - having only one model left - and had been speeding towards the Stag Knights holding the centre objective. I needed to destroy them and claim that objective to reach my minimum objective - not giving Mikko more than a narrow victory! 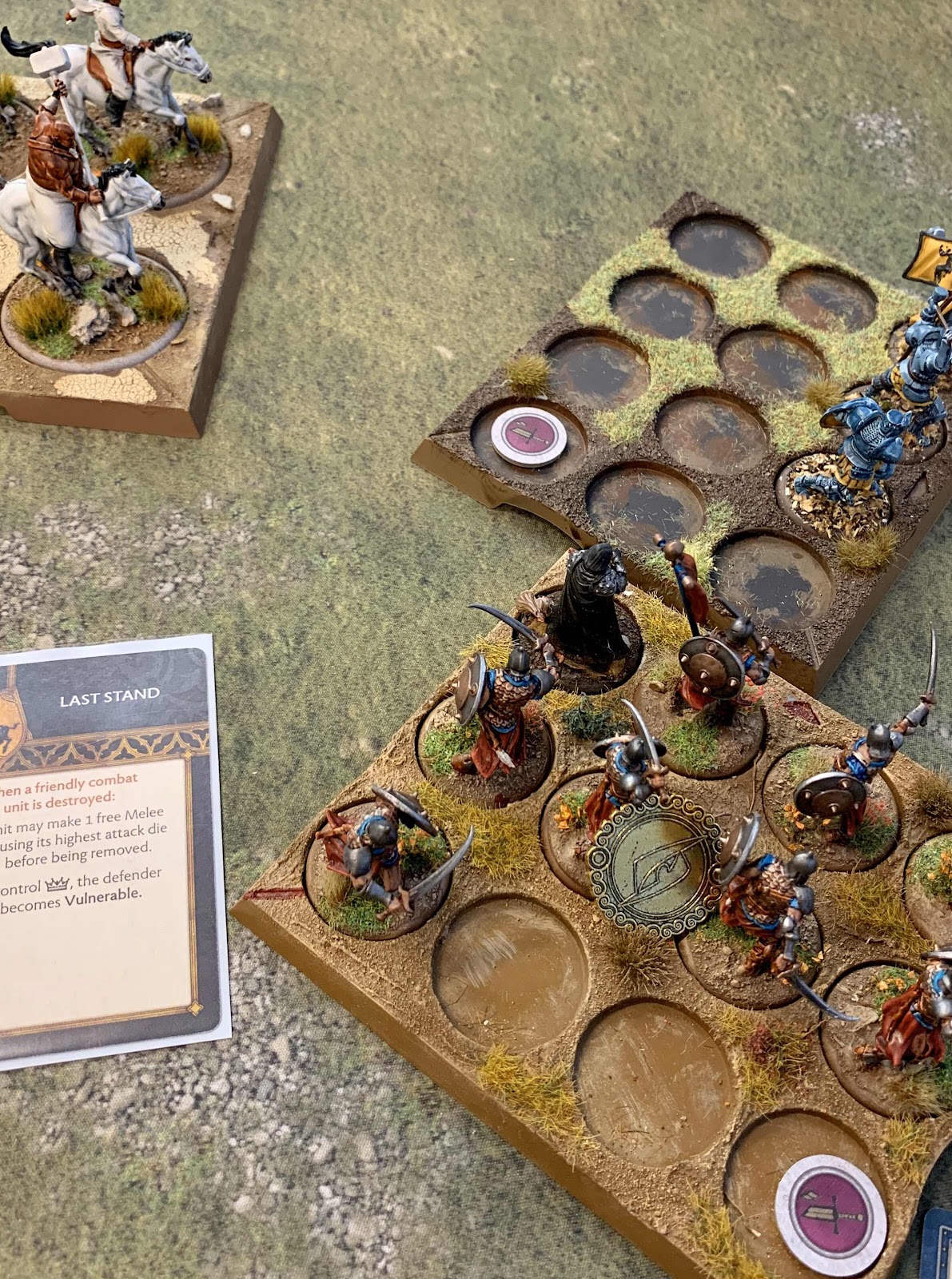 So my lone Veteran then charged Stag knights into their flank after 5 arrow shots, that had only managed to kill a one enemy (I failed most of my 5 3+ attacks!).  Only Daario and a Stag Knight stood after my hits, but adding to my anguish they of course succeeded in their panic test. Their 7 strikes then managed to  kill my lone Vet and this combat also swinged to Baratheon's favour. And so my last hope of a honourable defeat faded - instead of claiming two VP, I gave the enemy one more. MEH! 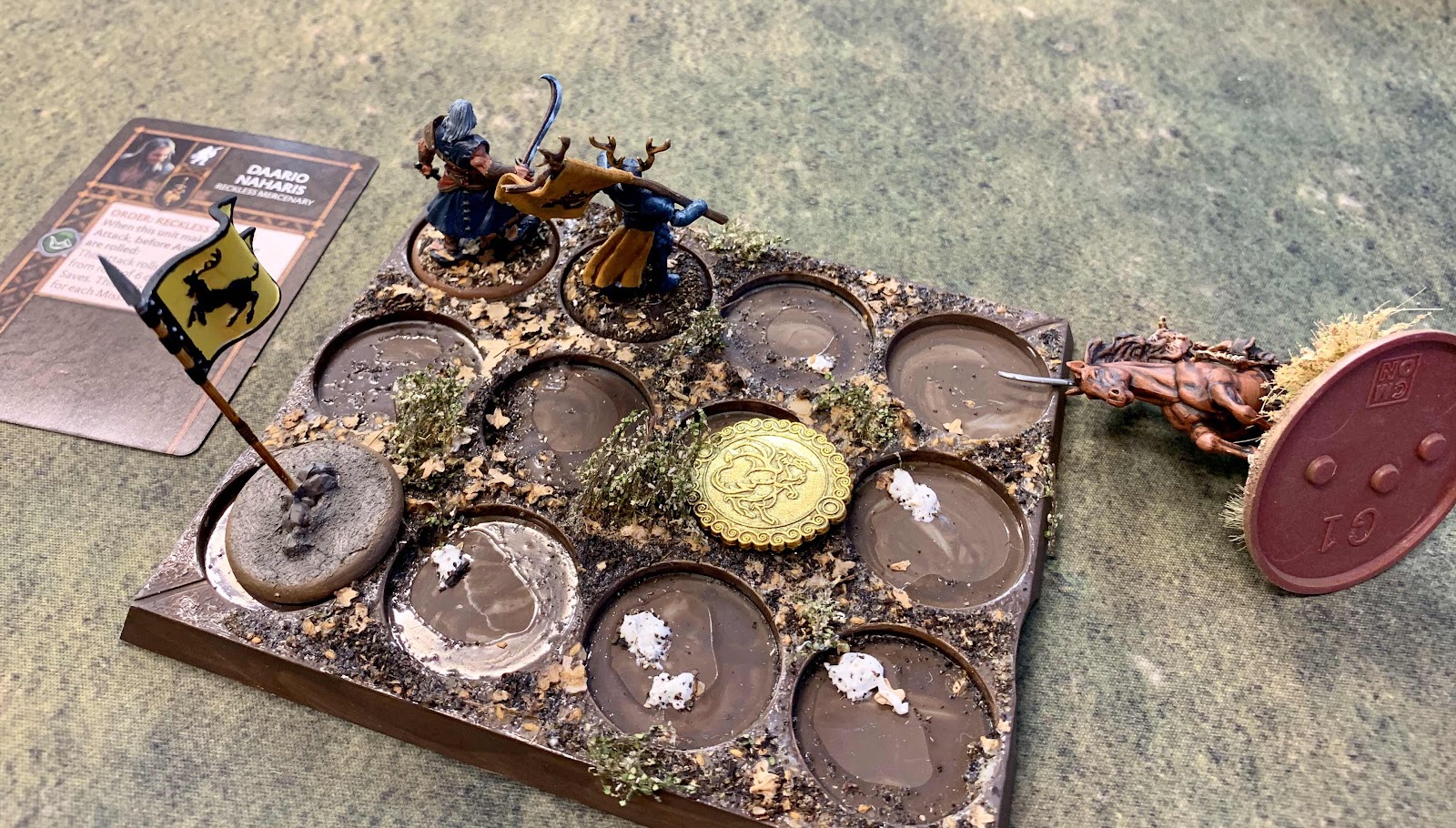 As a last, futile lash out my healed up Zorse boys attacked Brienne-Stag Knights in the flank and caused some serious damage, but with 7 attacks and a failed morale test, the max damage is 11, so futile. 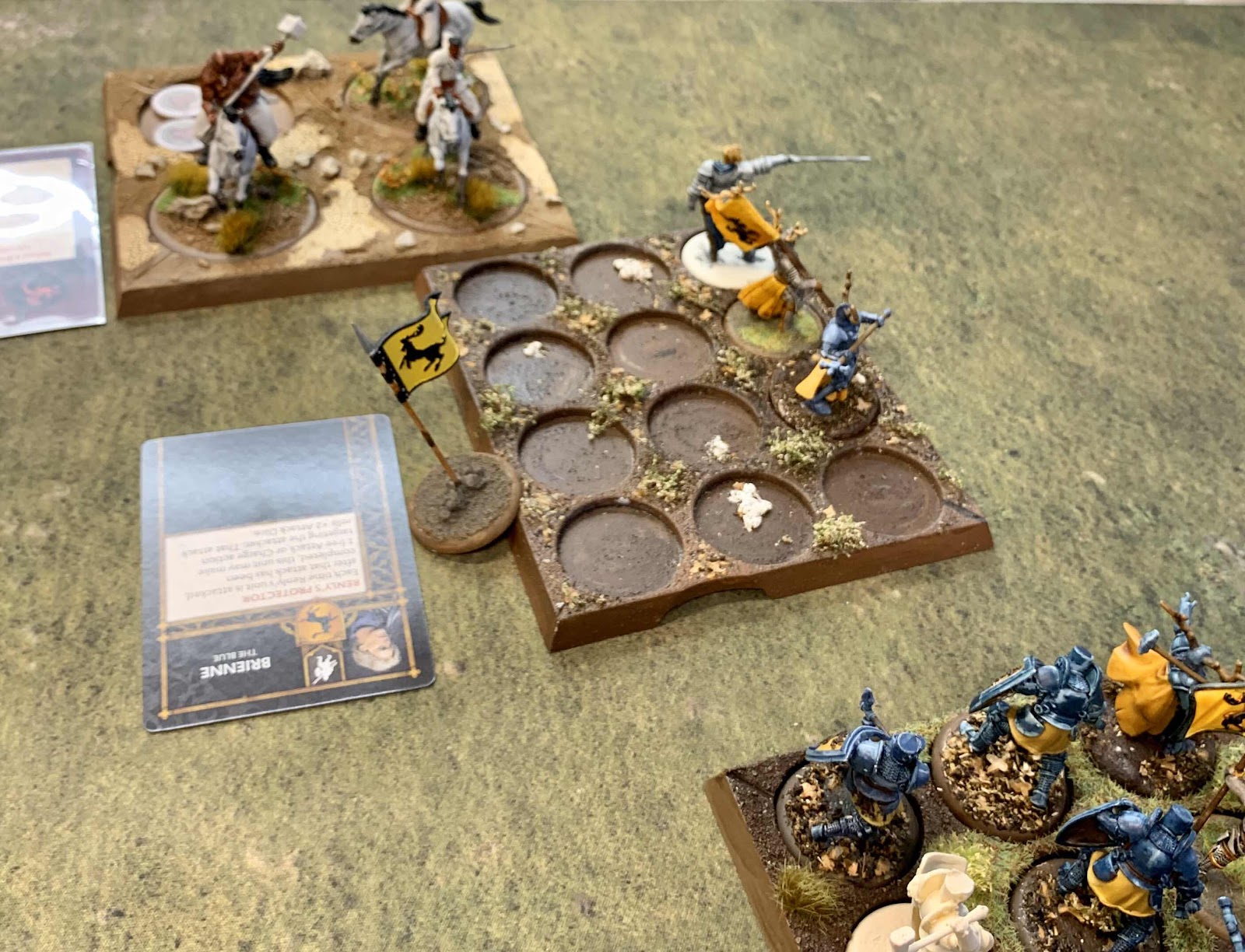 So the battle had ended.  I had two units left and I had only managed to kill a single enemy unit. I still find it hard to believe this result. It would be silly to blame the dice, even if there were a few failed / disordered charges... so why, oh why? 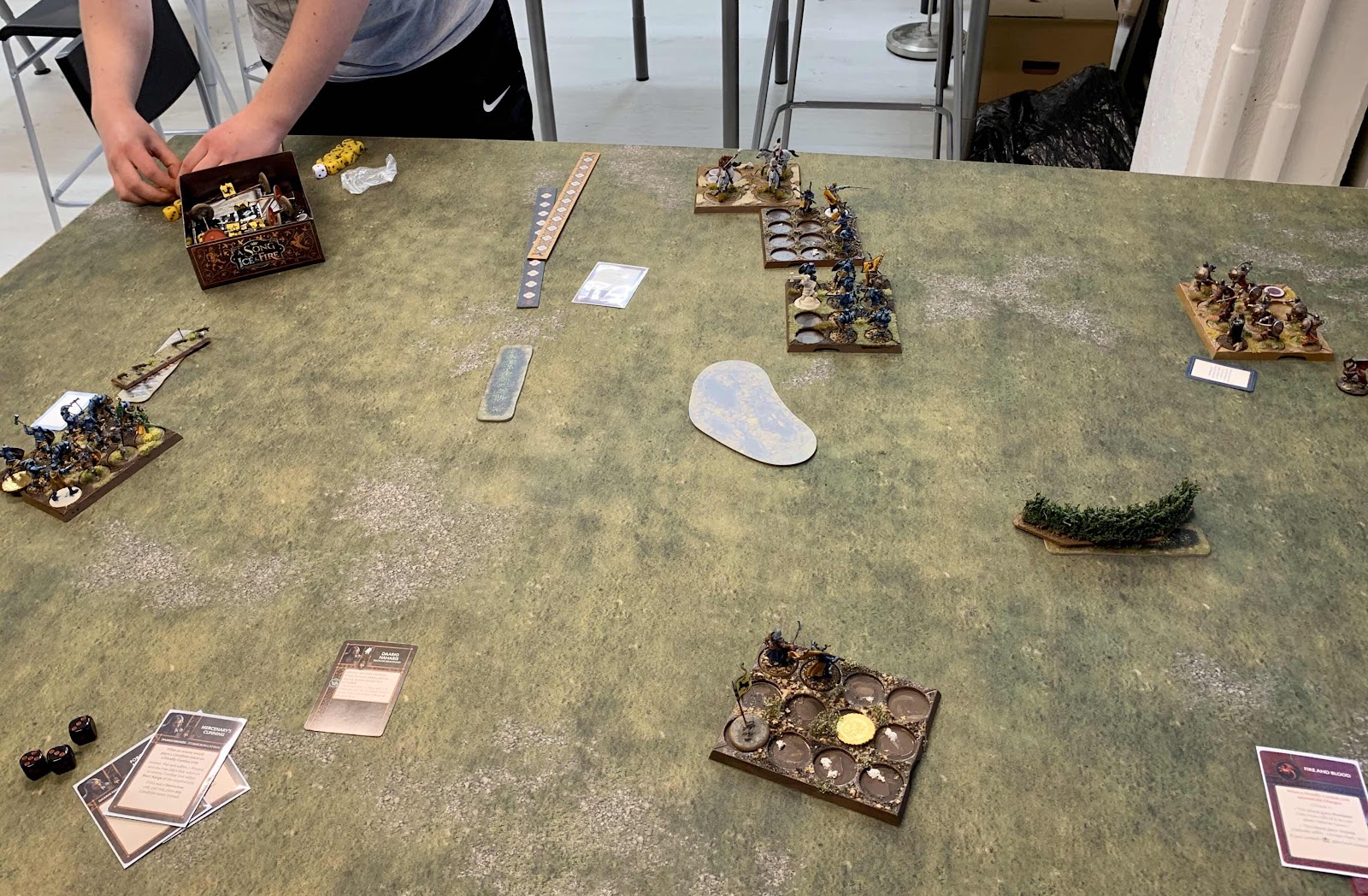 As the din of the battle faded, Renly viewed the battle field from a distance. His army had soundly beaten the enemy and he felt elevated, even if there was a tiny voice nagging in his mind: "It was that reckless mercenary, Daario, that had earned the glory, not you". 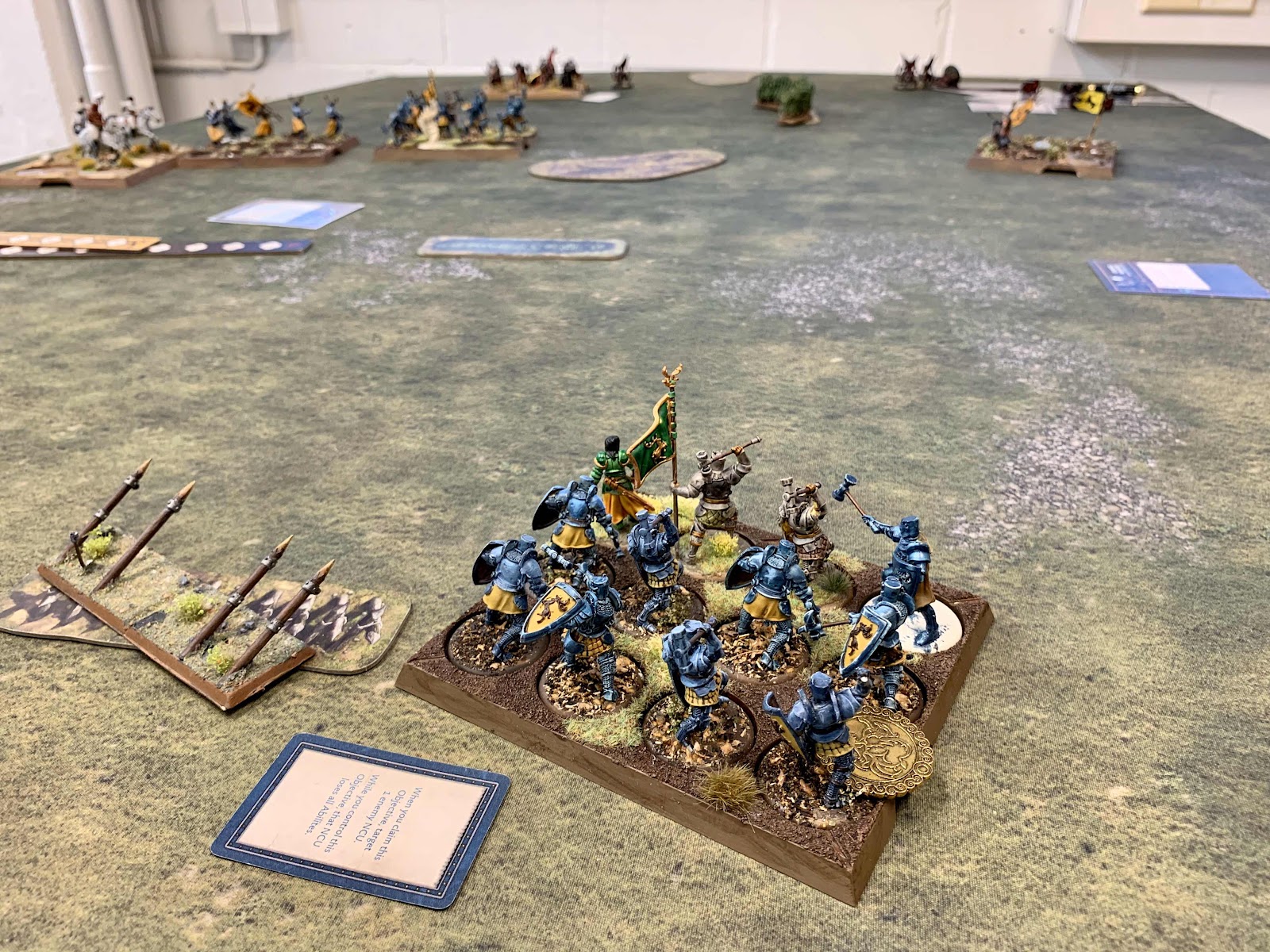 Another view of the end. 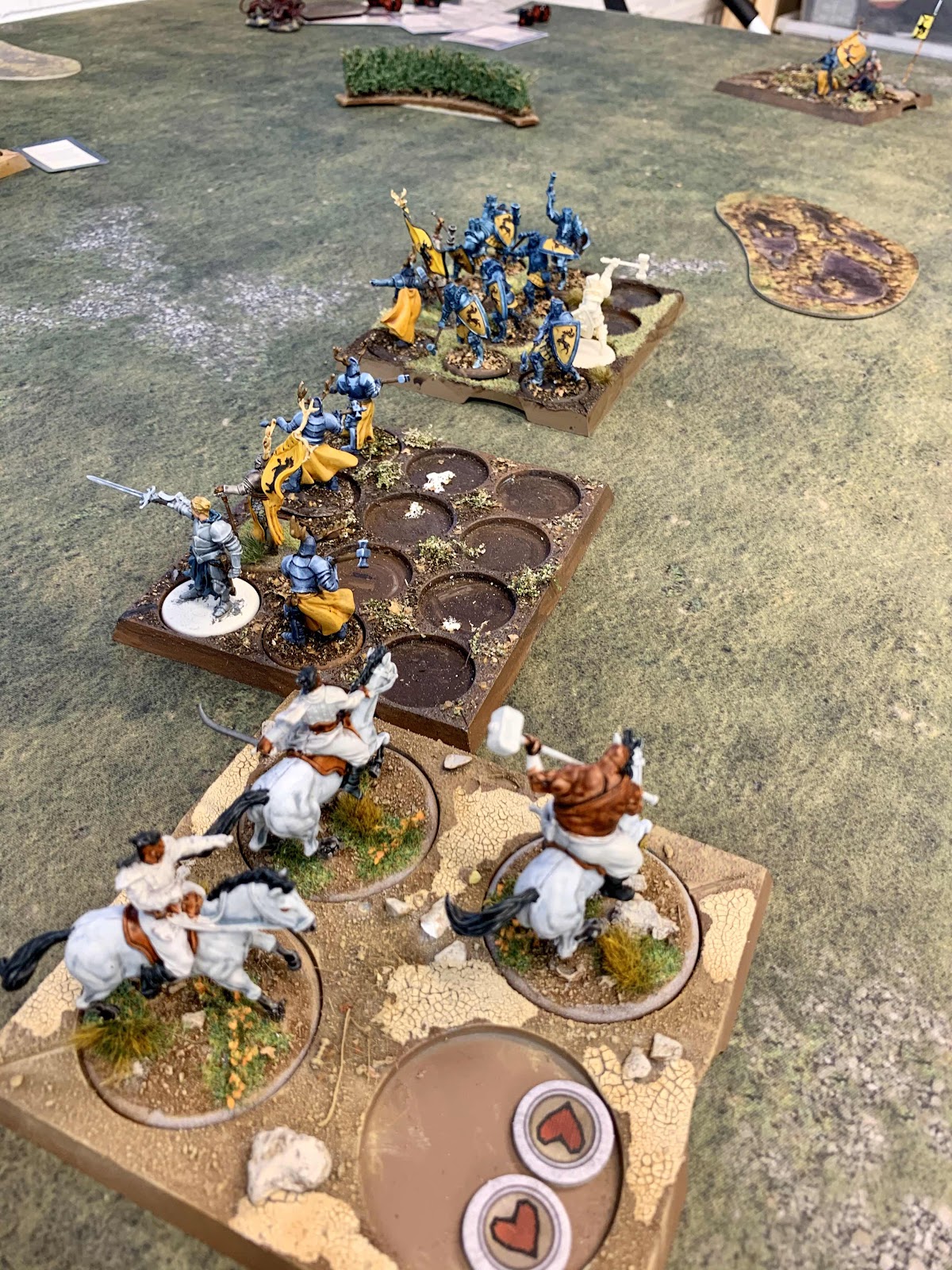 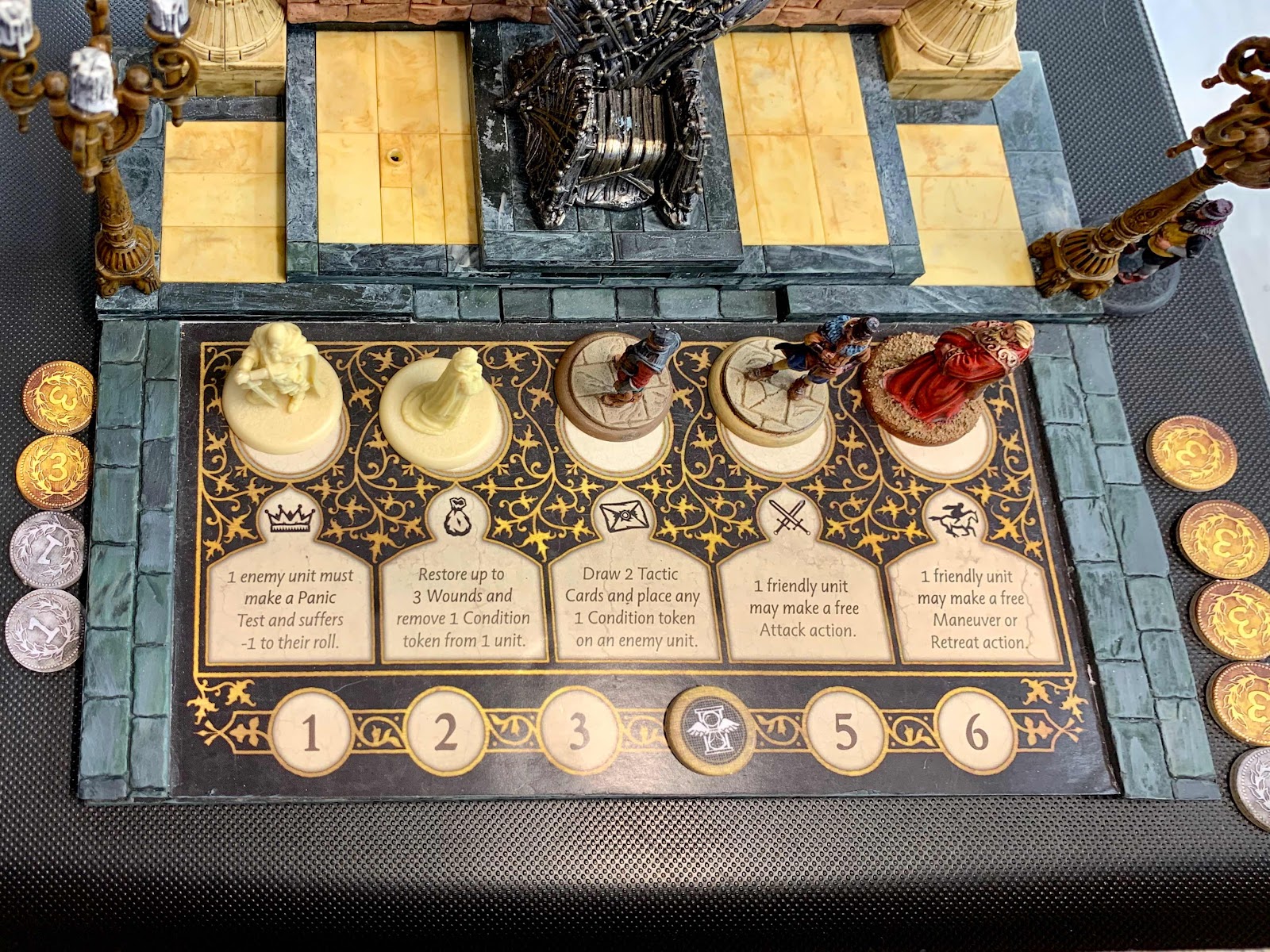 So what went wrong?

With a decisive battle Mikko was able to conquer King's Landing and eventually elevate himself to be the second mightiest Kingdom in our campaign. So this battle lost me the WAR!