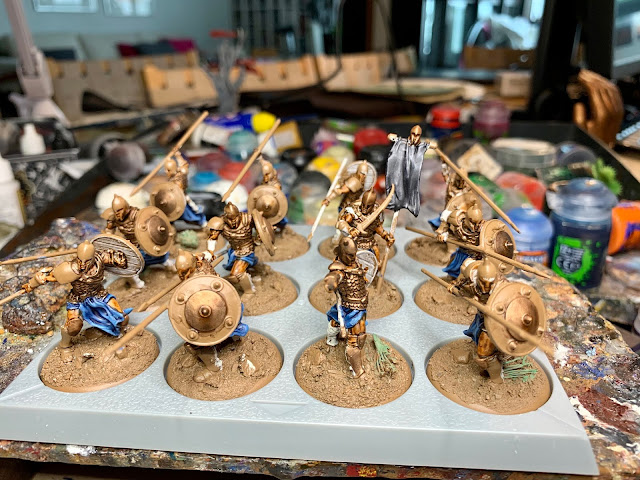 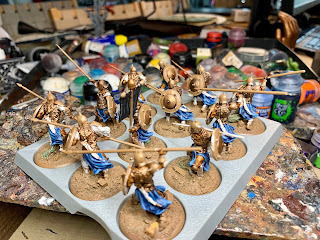 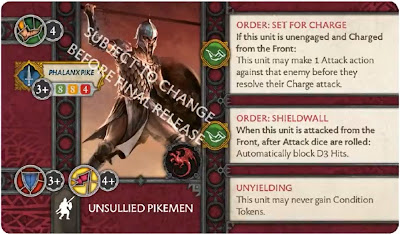 As Unsullied Pikemen were presented in the CMON Virtual Expo recently, I immediately set out to convert my second set of Unsullied Swordmasters into a pikemen unit. Taking long spears from Victrix plastic Saxon set I managed to build a unit, that actually looks like they were always meant to be Pikemen! As we don't their points value yet (speculations are between eight and ten), I agreed with my regular opponents to play them at 9 points. Read on to learn how they fared against them dreaded Starks!

I first considered to make an all infantry Targaryen army (well except Jorah, the Exiled one), but decided to take a unit of Screamers as there would certainly be a unit of Stark Bowmen to deal with... (as it proved, there were two!). My army was as follows:

Another new unit I wanted to try was Stormcrow Derwished, which seems like an awesome unit, compared to Stormcrow mercs at least.

Bolton Bastard girls are also one of my favourite units at the moment, I ran them
with Stormcrowarchers models to make them feel more Targaryen.

Starks were lead by Rodrik Cassel:

I deployed most of my unit in the centre, with Unsullied pikemen being the most obvious choice to head towards the central objective, that grants 2 VP. while my best killers - Unsullied and Derwishes were on my left flank - daring to face two units of Stark Bowmen 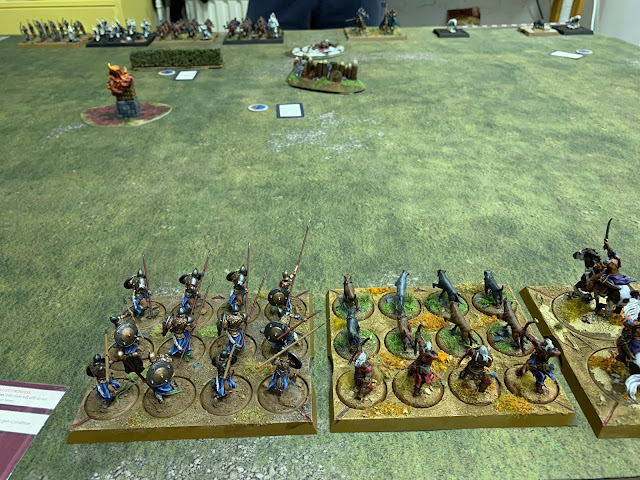 Only Jorah Mormont occupied my right flank, looking to
crab an objective 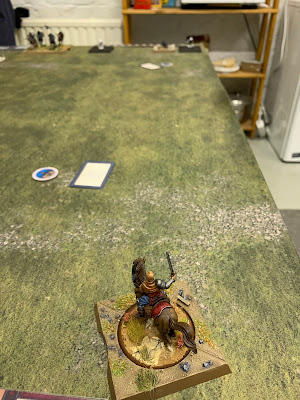 I was the first player. After the usual tactics board play our forces started to advance, I made sure to stay more than 14" away from the Bowmen units. 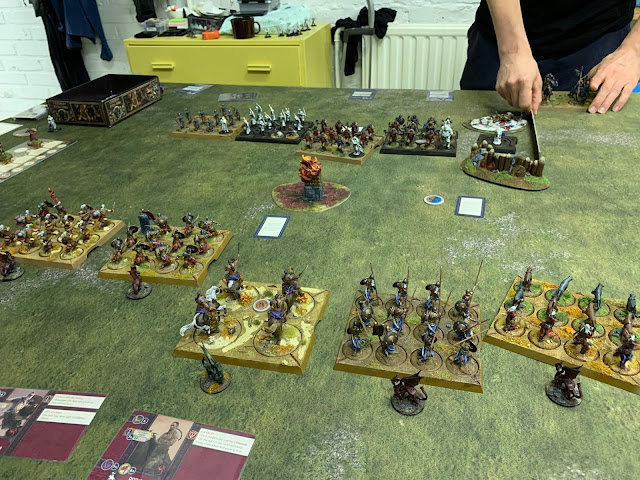 Round 2 started without any immediate charges from Starks. I bided my time, waiting for any of the Stark units facing my battle line to take initiative... on my right flank I moved Jorah into safety and
Bastard Girls turned to face approaching Dire Wolves and Stark Outriders and to protect the flank of Unsullied Pikemen. 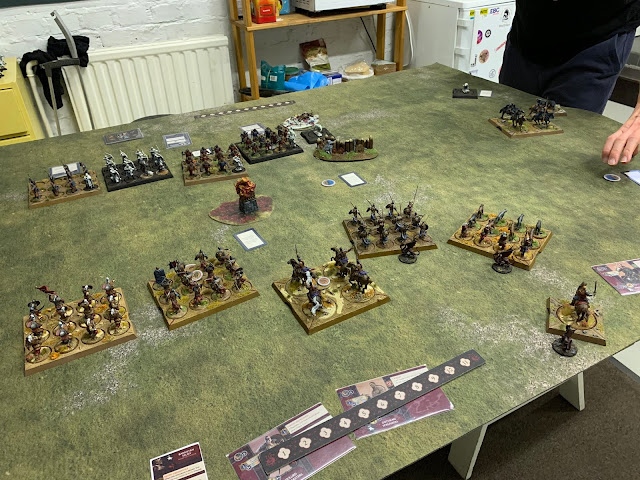 As the Stark battle line refused to move (Starks out activated me 10-8), I decided to make a daring play and I had the cards I needed... My Screamers charged the Berserker unit next to Bowmen with Hit & Run and retreated to face the bowmen, blocking their los at least partially. Arrows rained on Screamers and Derwishes, then Berserkers followed with a charge... soon my Screamers were no more, they had been sacrificed for the greater good: now both my Unsullied Swordmasters & Stormcrow Derwishes were able to charge the Berserkers and I had an Overrun card in my hand... 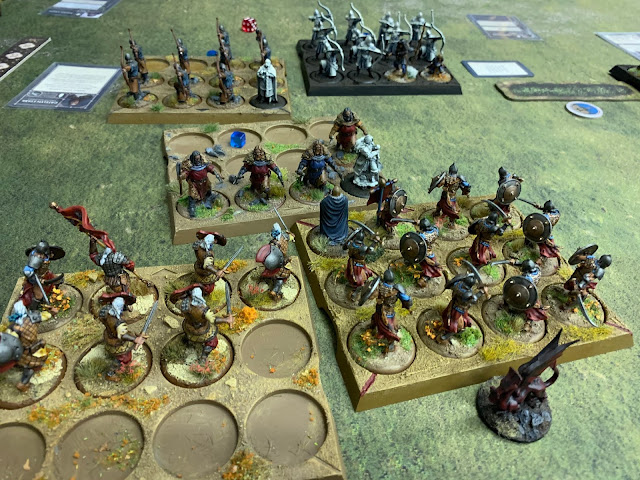 But failed to wipe out the Berserkers, which was a disappointment!
SC Derwishes had two ranks left after taking in some arrows and they charged in too. They also
failed to finish off Berserkers! Unbelievable!

In following rounds the unexpected continued to happen and both Derwishes and Unsullied Swordmasters succumbed to arrows and attacks from both Berserker units - without any Stark units being destroyed! If only I could have destroyed the first Berserker unit I could have engaged both Bowmen units.... I still think my plan was solid, if risky, but it was not meant to be.

In my right flank a status quo continued: my Bastard Girls were staying vigilant and no Difrewolf nor the Outriders dared to make a move. Unfortunately Starks were sitting on more objectives then me, so their score was rising too rapidly...
Unfortunately this part of the battle was so intense, I forgot to take photos.

It was my turn to go first and my slowish Unsullied Pikemen had been approaching the central objective and immediately charged the lone Direwolf sitting on it. After skewering Shaggydog,  the turned around and charged with overrun right at Berserkers with Bran & Hodor. Still Berkersers proved undestructible, but I guess it's better to charge then be charged - even if I have the Set for Charge order. I placed my unit as far from Stark battle lines to avoid flank charges from them... 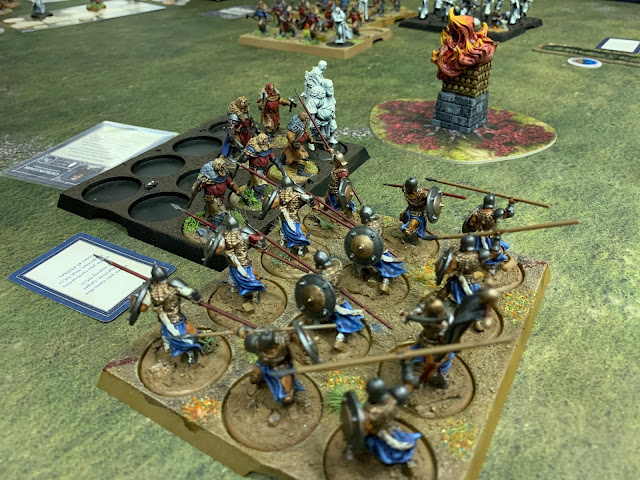 My rigth flank also erupted into action: with "Swords" from the Tactics Board my Bastard Girls (made to look more Targaryen with SC Archer models) shot at Grey Wind and followed with a charge (Charging volley). A second wolf killed, I think I had a second Overrun and proceeded to charge to Outriders - BGs had now shot and made two charges without being activated yet - this is Targaryen fury at it's best! 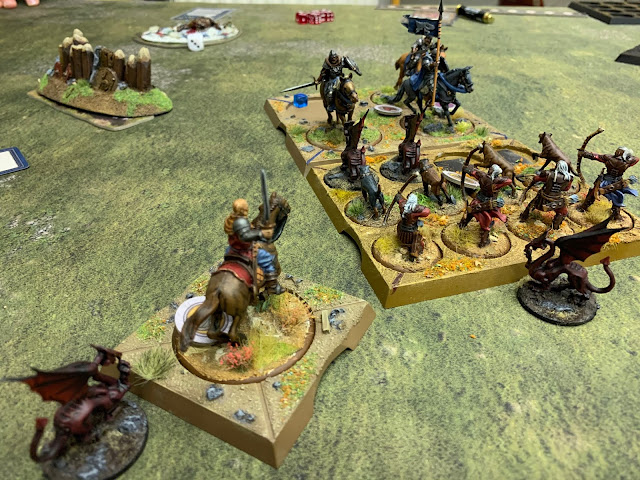 Jorah also found it safe enough now to approach and start distributing those tokens... until he was Crown zapped to death... so much about morale four. 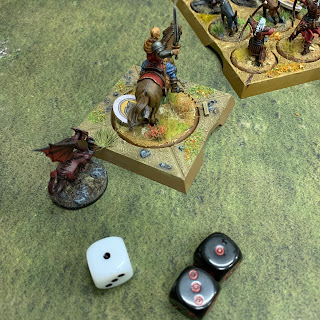 Starks and charging... you know! Naturally my opponent was holding a Swift Advance TC in his hand and so Robb speeded his unit of Berserkers to the flank of the Unsullied Pikemen. After two attacks from Berserker units (one with Catelyn) the Pikemen were still standing, having lost only 5 men. They are tough as nails! 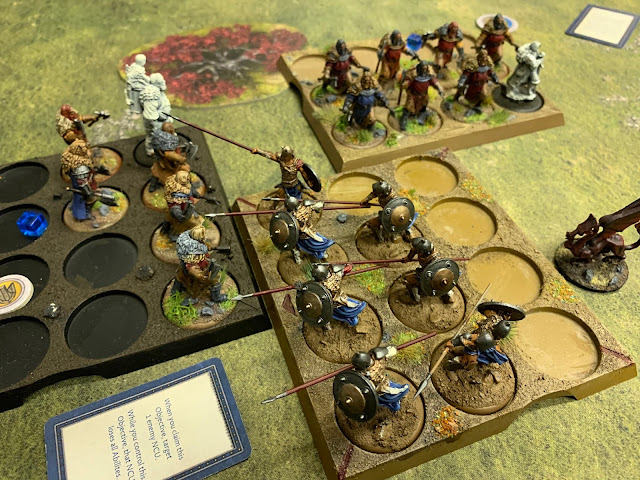 So I killed two Direwolves and made several successful charges, but I only had two units left, while Starks had only lost those wolves. And so the game ended as Starks reached 10+ points, with my score only at four.

Paavo had made a really efficient 50p. Stark list with 10 activations and double Bowmen and double Berserkers. With an advantage on activations and NCUs he had far greater control then me and that and the efficiency proved too hard to beat.  Catelyn and Eddard also healed Stark forces, while I lacked healing. I would also really have needed these very good cards from Barristan: 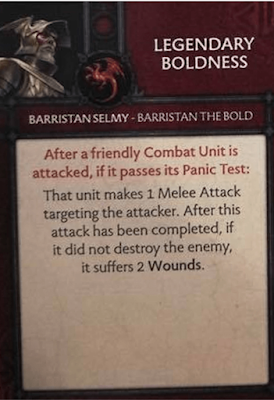 These would really have boosted many of my units, specially morale 4 Unsullied units and also morale 5 Bastard Girls.

So, in this game I lacked efficiency, which lead to my aggressive play failing and then my entire left flank crumbled.

Unsullied Swordmasters - failed to wipeout already depleted Berserkers. MEH! Their precision would have been better fighting some more defensive Stark units but there were non in the field. In some games USMs have really shined and then in others totally not. Need to keep on practising and maybe try out their officer. So far I've stayed away from making them a 12 point unit!

SC Derwishes
They are a really solid unit with interesting abilities. In this match up I was out activated and had no chance to get them into the enemy flank. They succumbed to enemy arrows. Hard to evaluate them at this point.

Unsullied Pikemen are a very much needed new tool in Targaryens. I think they are worth 9 points, both hope they shall be 8p. They held fine against Umber Berserkers. If only I could have reached the central objective with them...

Bastard Girls are one of my top 3 favourite units at the moment. Extremely good performance and brings Vicious to Targaryens.

Even if I suffered a crushing defeat, I shall continue to experiment with this list.

Having now played some 30 games with Targaryens (and won a bit more than lost), I think they are an awesome faction (love the deck), but with current available units really suffer in the amount of activations (many elite units). This need has to be currently answered with cheaper neutral units, like Bolton Cuthroats and SC mercenaries. I also struggle to win with 40 point Targ lists, I think I've not won a single game with 40 points.