Mikko and I were on the top 3 of our Mare Nostrum campaign and he was expanding strongly in North Africa, despite the best efforts of my Cathagenian allies: 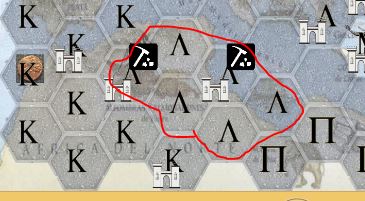 Even if I knew I'd be facing a tough and slightly larger Spartan Army -  I just had to put an end to this expansion! Read on to learn, how it all went down...

This campaign round didn't have any spesific scenario, but Mikko had chosen Outflank as his event. So he left a 5 unit (including 3 spartan units) strong division in reserve. They would arrive on 3rd round from Mikko's chosen side of the table +/- 12" from the center line.

I had 430 points to use (against MIkko's 450p.) and wanted to try a cavalry heavy army, since I knew, If I went toe to toe against all those spartans it would be a game of luck - who'd roll better - so I thought I must find an advantage by maneuvering with my rather fast cavalry. So I had two cavalry divisions and 4 divisions alltogether to give me more flexibility. 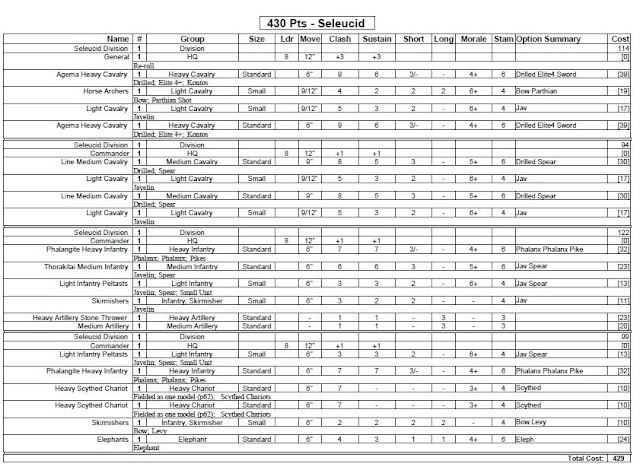 Mikko's army was - as usual - filled to the brim with Spartan Hoplites, I think 5 units, then some heavy hoplites and even few levy hoplites. Just two units of skirmishers, one with bows and one with slings. Very traditional approach, even if playing with Later Hoplites. Then again, it has very well for Mikko so far, he has won all of his games in the campaign.

As per his Event, Mikko left a strong division in reserve: 3 spartan and 2 heavy hoplite units. They would arrive from his pre-chosen table side in the third round. 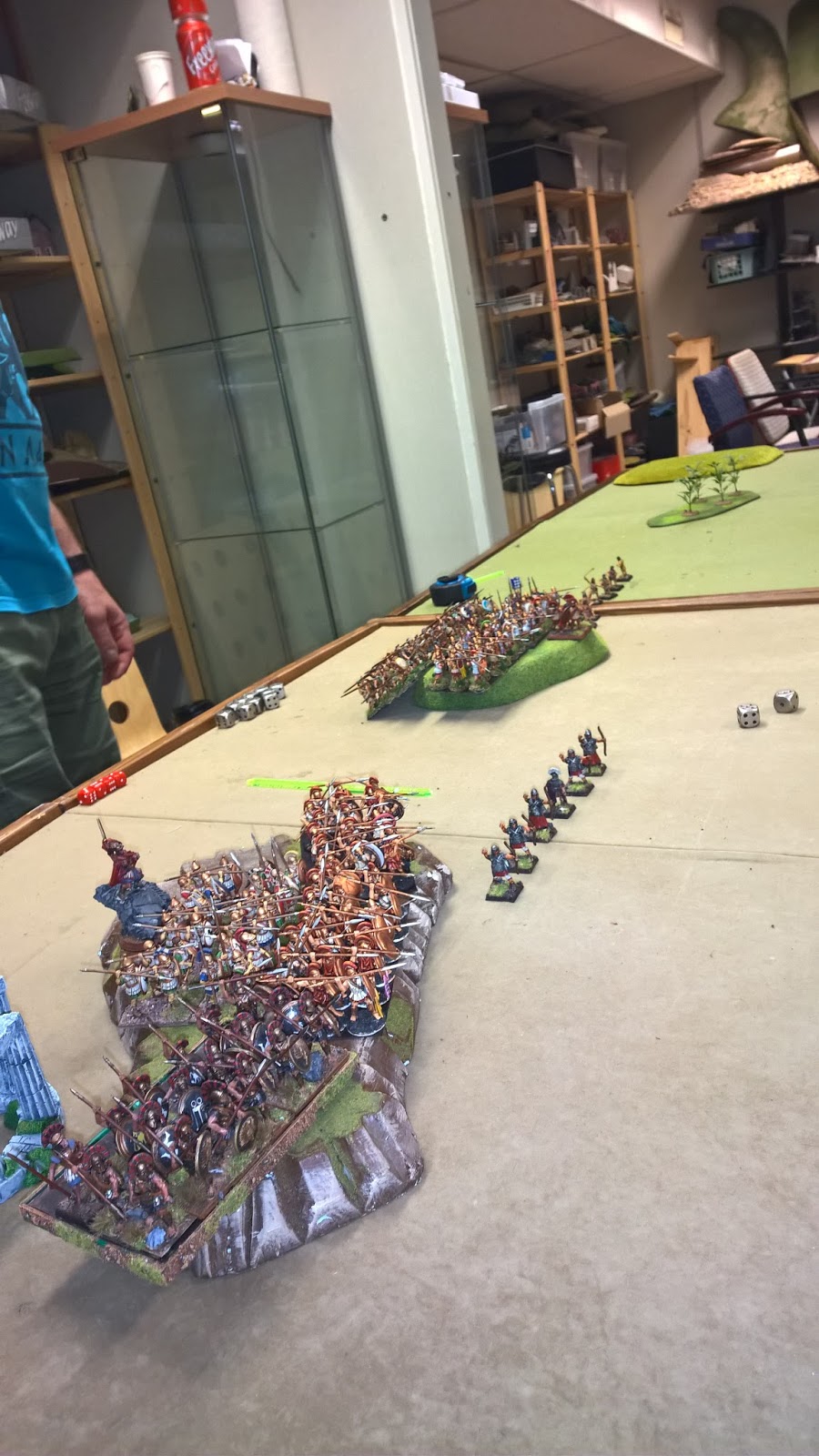 Hoplite army deployed on their right half of the table. Spartans took the hill and some lesser hoplites took the other. 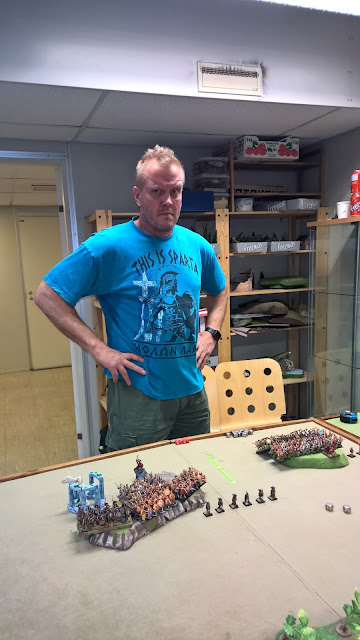 Mikko - in his famous  Spartan T-shirt - ready for the battle! 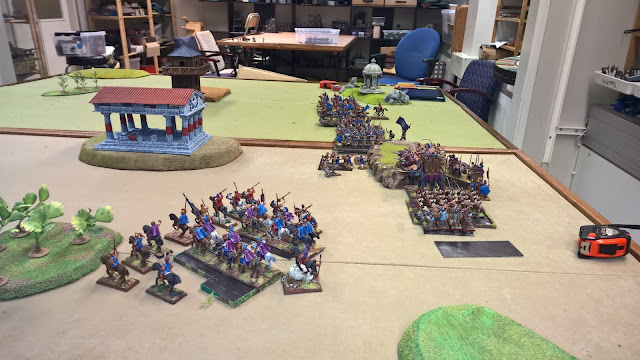 I deployed my cavalry divisions on both flanks (heavy cavalry with kontos on the right) and infantry & co. divisions in the middle. I made sure not to stray too far from the Hoplite deployment, it was quite obvious, that I needed to cross the nomansland and engage. At the same time I kept away from the left table edge, because it was also obvious, that the outflanking force would arrive from there... 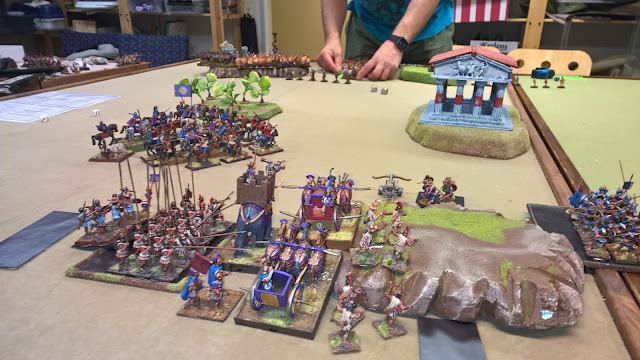 I managed to get the first round and my left flank cavalry moved away from "too near for comfort" left edge - all in columns. They were the fastest in my army since left of my divisions moved just one move - even a blunder roll was seen, but it was rerolled. 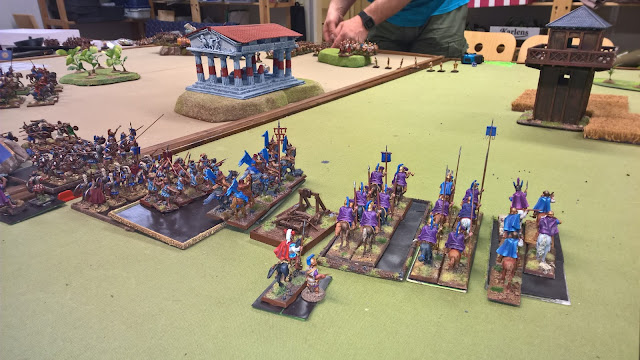 My heavy hitters on the right

Spartans took positions on the edge of the hill and lesser hoplites obviously lost their nerve as they saw the massed cavalry approaching since they turned and headed off towards the rear behind Spartans. Unfortunately they were slow... too slow. Greek slingers dashed towards the temple. 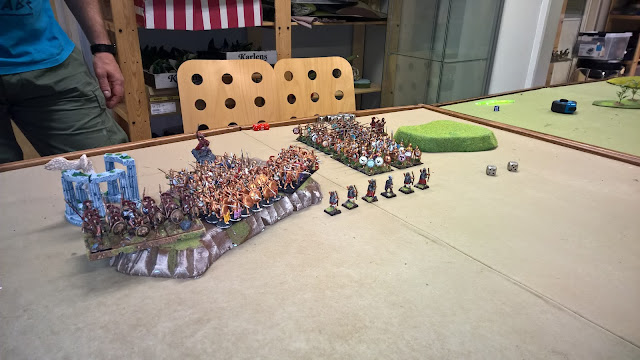 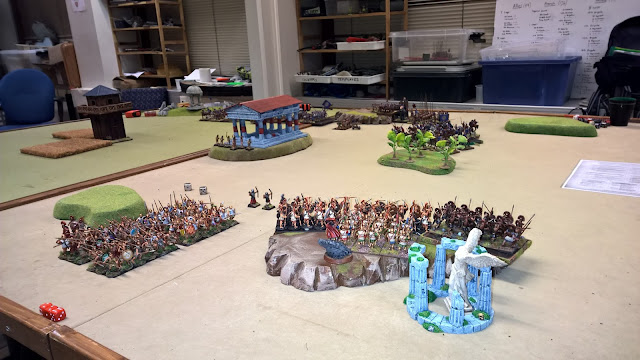 Greek positions from behind.

My left side cavalry saw the levy hoplites showing their flank in the distance and dashed forward, deploying into battle lines as well. My skirmishers took positions in the temple. 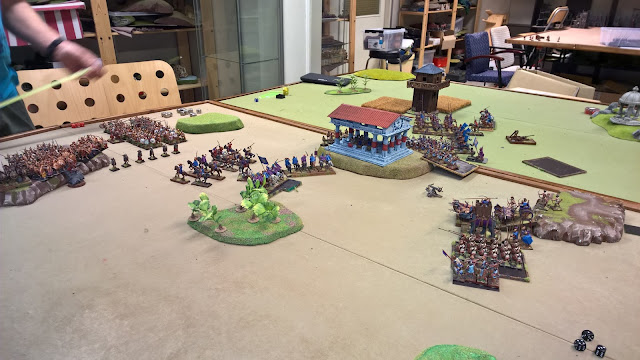 Unfortunately three my other divisions were moving far too slow - division with heavy chariots and the elephant didn't move at all! This didn't look good, not good at all! Second round saw first missile exchanges, but nothing significant was achieved. 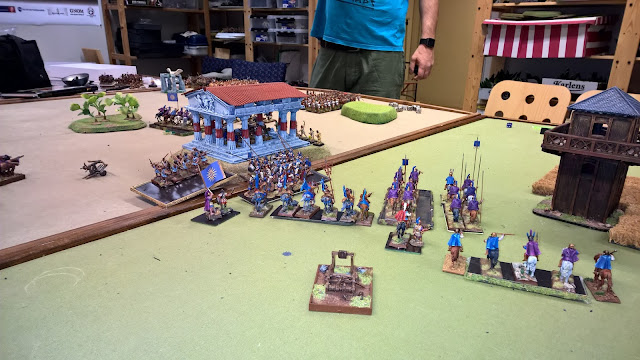 Mikko's light elements moved to harass my troops and probably also hoping to screen my troops off course, pah! The division with levy hoplites was still slow, they only moved one move and because of this, one unit turned to face the coming onslaught - brave souls indeed! Mikko's bowmen managed to wound my light cav. 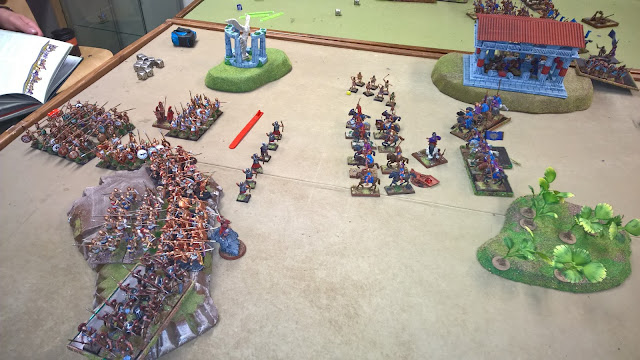 3rd Round - more Spartans in the horizon!

The battle was now escalating fast! My cavalry spurred their horses forward, desperate to reach the enemy before their reinforcements would arrive. My light cav ran the Greek archers down, but  my poor medium cav was not fast enough! Only few inches separated them from the levy hoplites! Damn! Two moves wasn't enough (and this was the result of a reroll). This spelled doom for this division! 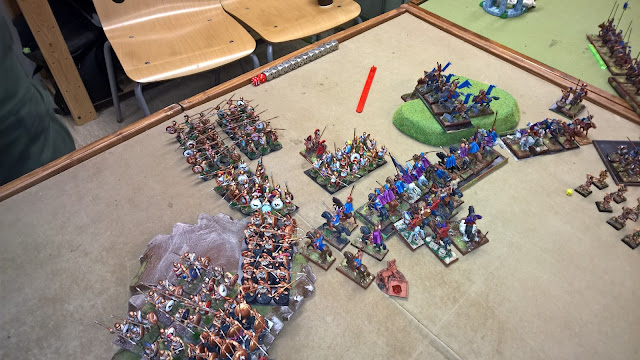 Luckily my two divisions circulating the temple found the right gear and pressed forward in a hurry. Light cavalry elements took the hill on the enemy deployment zone and the heavy Agema Cavalry opened into battle line just a bit behind. My infantry division took a risk and pressed on in marching columns. My troops peppered Greek slingers and the hoplites standing in defiance and few wounds were caused, but those Greeks weren't going anywhere, while the Spartans were watching... 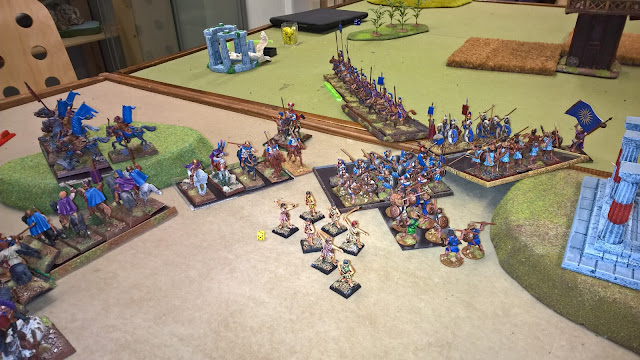 Since my "specialist" division wasn't anywhere near the soon to be erupting fight, they decided to turn and prepare to counter the soon to be expected second Spartan division... My bolt thrower was now in position and opened fire on the Spartans at the hill. Not surprisingly, they held firm under the fire. As expected, Greek Third division arrived, but were quite slow to move. 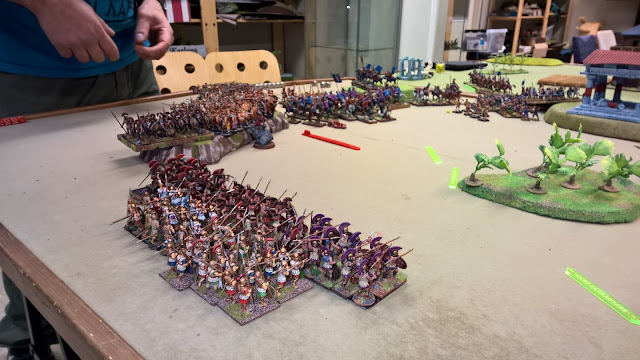 Mikko's Spartans on the hill didn't wait longer, but charged down the hill. First unit used their initiative and scared my light cav away (they evaded 36" with three moves). Rest of the Spartans charged towards the flanks of my medium cav, whom didn't even have the space to turn!

Levy hoplites now followed with their charge safely, since I couldn't counter charge anymore.
Rest of the lesser hoplite division turned around and charged my horse archers, whom successfully evaded. This was a good move, since my heavy hitters were approaching. 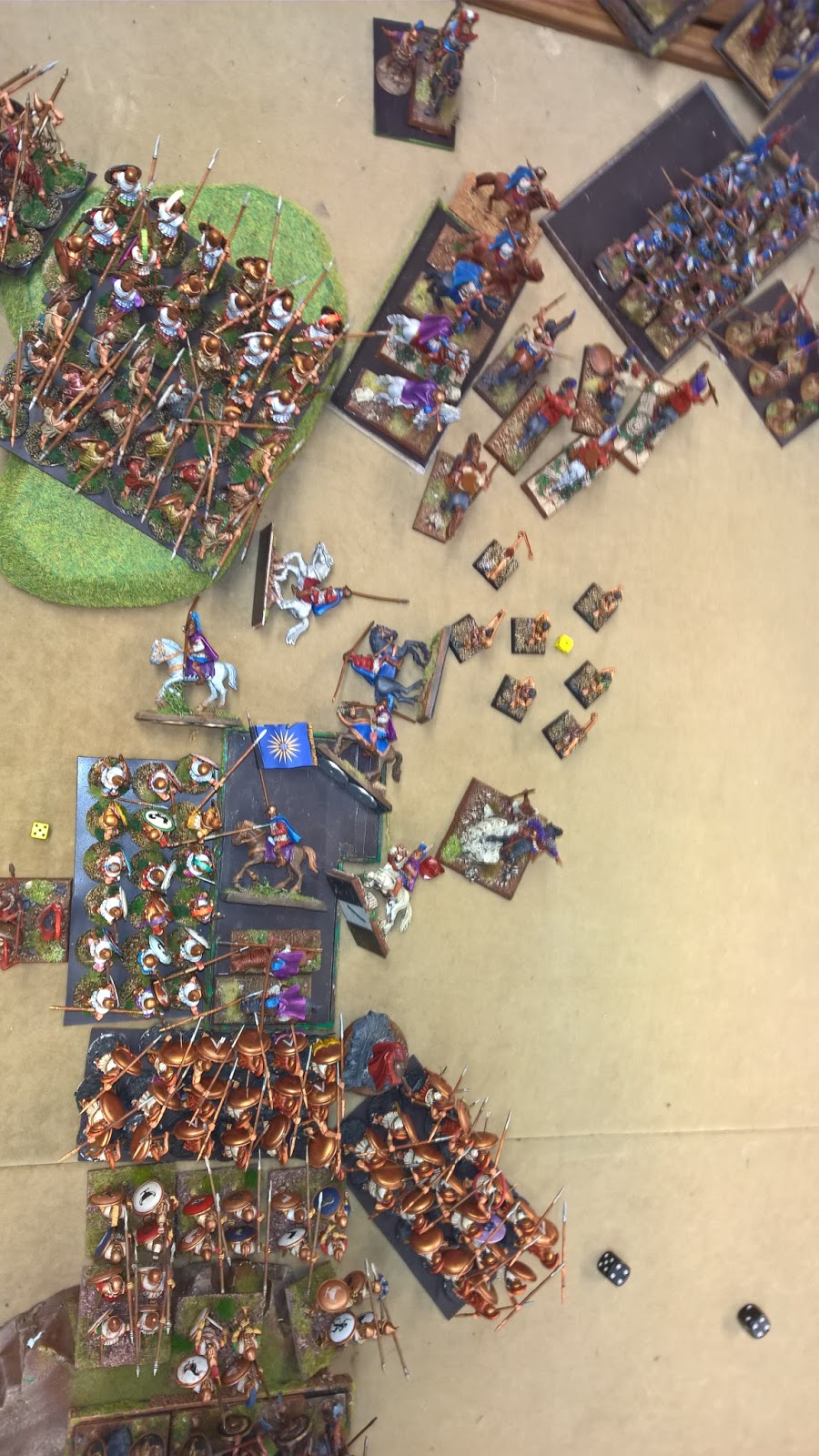 As can be expected, my cavalry unit was annihilated by this infantry onslaught. They did succeed in causing several wounds on the levy hoplites, but the amount of damage they took was just over whelming. I lost the combat by seven and both of my medium cavs broke. The light cav that had been supporting, retreated in disorder. 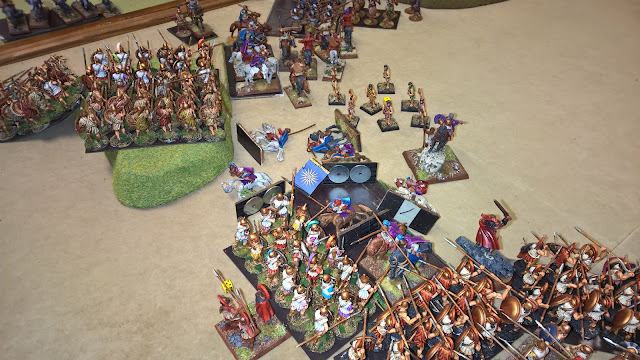 Even if I was shocked of the fate of my medium cavalry (they have now broken in two consecutive games on the first enemy conatact!), I pressed on and home my attack and hit the hoplites on the Greek left flank with my two divisions: heavy cavalry making contact and both the light can and the infantry moving successfully into support. 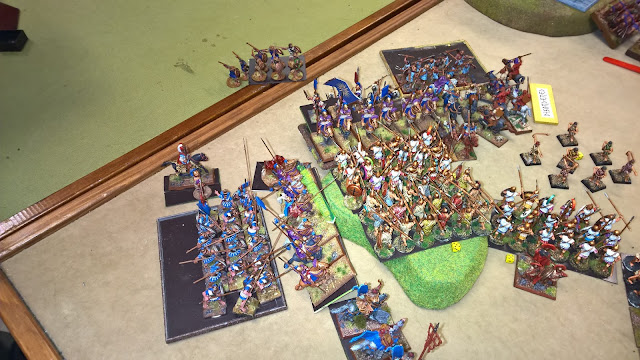 I started the combat from the units nearest to the table edge and threw my commander into the combat as well - breaking this enemy would the key to winning the game! My Agema with Kontos (and good supports) duly did what was expected from them: they broke the enemy and sweeped (dirordering themselves in the process) to the flank of the hoplites holding the hill, whom had not yet fought. Struck by two well supported Agema units was just too much for these poor souls and soon they were also trampled under the hooves!

Now it was time for the other sweeping advance and like an avalanche my cavalry proceeded down the hill and quickly dispatched the hoplite units that already had 5 wounds from the fight with the medium cavalry. This broke the Greek division.  With their final victorious move they engaged the Spartans to the flank, this fight would take place in the next round. 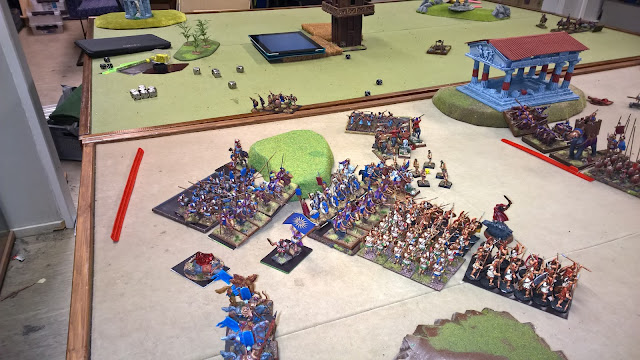 The lone light cav also shined: they had sped their horses to harass the side of the approaching Spartan division. Few well placed javelins saw a Spartan unit retreating in disorder, nicely ending their retreat in front of their comrades! Sweet! My specialist division took positions between the forest and the temple, their missile fire even managed to drive back one of the Spartan units on the hill! Bloody and bloody excellent round for me! 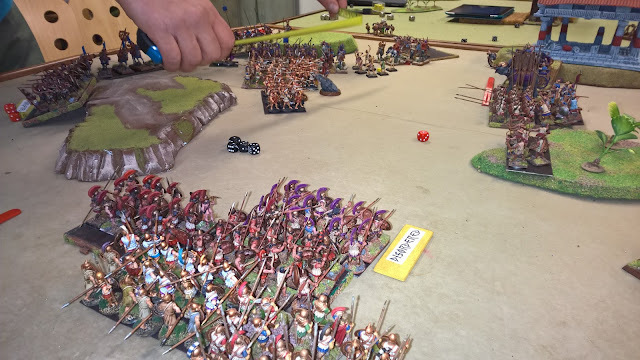 End of Round 4 from another angle: 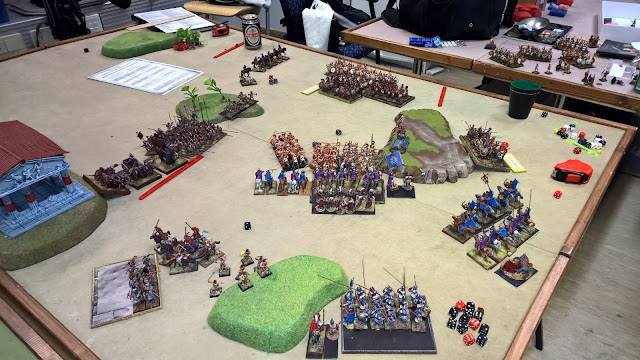 Mikko round 4 was quite uneventfull. My specialist division was quite well protected by the forest, so the outflanking division couldn't reach them. Neither of the missile fire disordered ELITE Spartan Units managed to come out of the disorder. 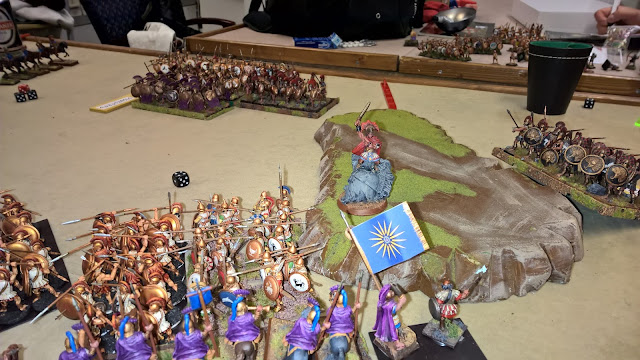 Few blows were exchanged in the combat between Spartans and my Agema, but that ended in a draw. It was obvious, that the warriors were starting too feel tired and the night was falling...

I won the battle by exactly 100 points:

I lost 60 points (two units of medium cav) and Mikko lost 110 points in broken units and 50 points from the broken division.

This gave me a much needed 4 points in the campaign!

My heavy cavalry was just amazing! Between them (ok well supported and commanders joining the fights) they destroyed 4 hoplite units in JUST ONE ROUND and one of them then even proceeded to engage two more Spartan hoplites into combat. 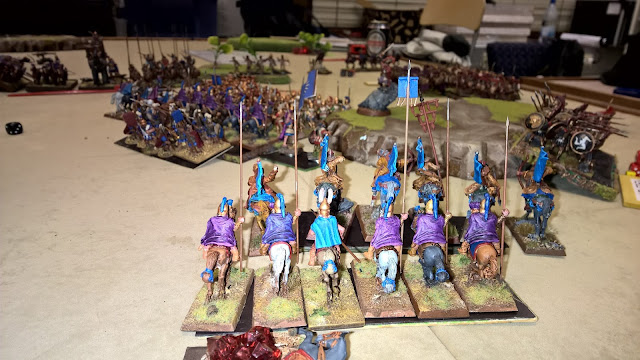 None of my infantry units didn't even reach actual contact with the enemy and my specialist division didn't even reach the fight - nor did the third, very strong Greek division. Partly due to the fact, that Mikko wanted to call it a night after 4 rounds. Anyway, the game was quite clearly in my bag at that moment.

So my cavalry-strategy worked well. Looking back, it's quite obvious, that the forlorn charge of the medium cavalry was just a bait to lure the Greeks out of their defensive positions and helped me to reach them before 1 third of their army could join in. Strategy well executed, decorations all around!