After mainly losing against Rome, barbarians had brooded on big plans and as the cold white season descended to Britain, those mad Picts charged forward, en masse! Oh dear... 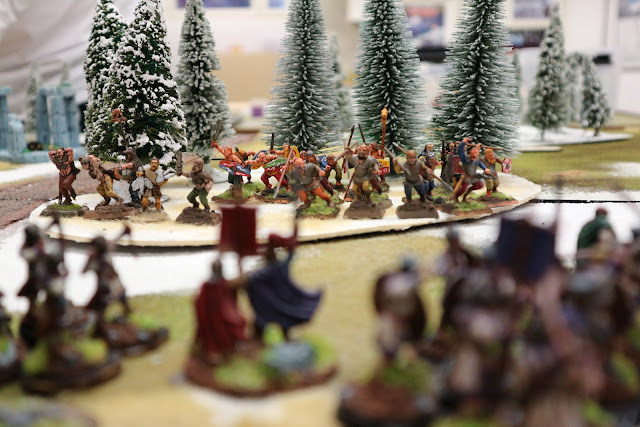 
So our second go for the Limes campaign had reached it's 3rd year. Barbarians had given us plenty of TIME UNITS to spend (so I certainly didn't expect for a winter raid) and I had built myself and armoury (recruiting levies), fields (free levies every year) warmachine workshop (gives a manuballista for every game) and a villa (2 extra time units for construction every year). 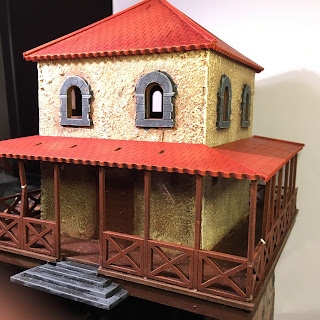 
My army stood in a decent strength with WL, religious advisor, 8 HG, some 30 warriors and 4 levies. I also recruited mercenaries: a pack of hounds (move 6 always, can't be slowed down). Of course I had the manuballista from the constructions: 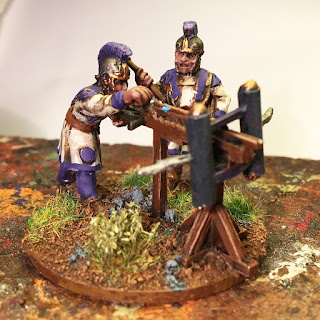 So my army stood in about 8 points. I had worked on my cavalry, looking forward to field them... 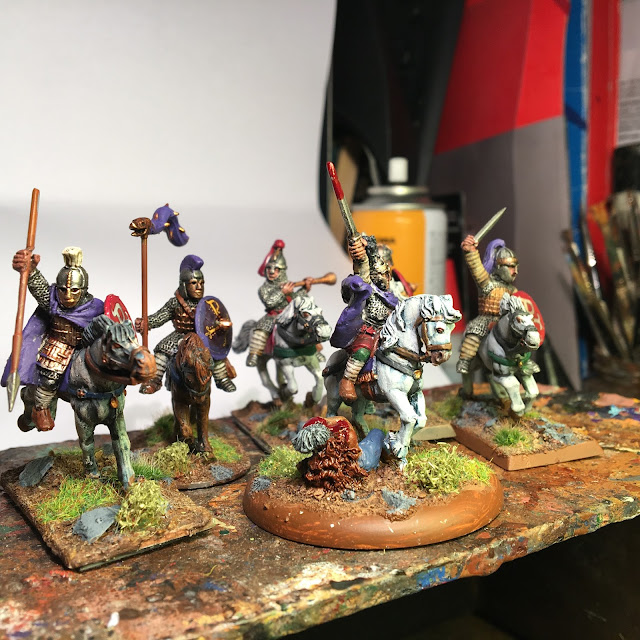 But they were not needed, as all units move 4" in a winter raid. 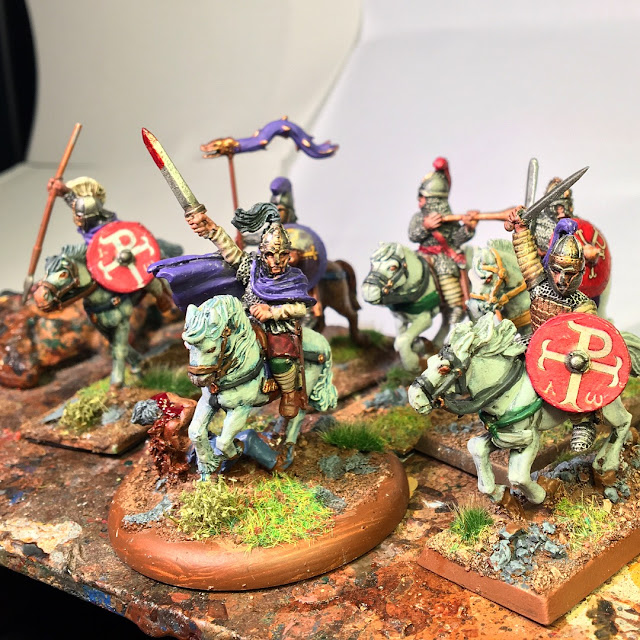 So, the barbarians had had a revelation: kill lot of Romans in the early phase of the campaign to make them weaker. Very clever indeed. So they had taken most of the tricks. Besides being a Winter raid and a vengeance scenario (kill points for victory) I had to deploy first, only got 4 dice to roll on the first turn, they had extra 6" to deploy and they sabotaged mt manuballista (snif) etc. AND the barbarian army was huge 10 points horde with:

My army was somewhat smaller, but I had the advantage of being able to roll 7-8 saga dice every turn (religious adviser)...

Barbarians deployed in two groups behind the well placed forests, while I placed one archer unit and HG in the buildings, 10 man archer unit to my right flank and 12 man warrior unit + both HQ between buildings. 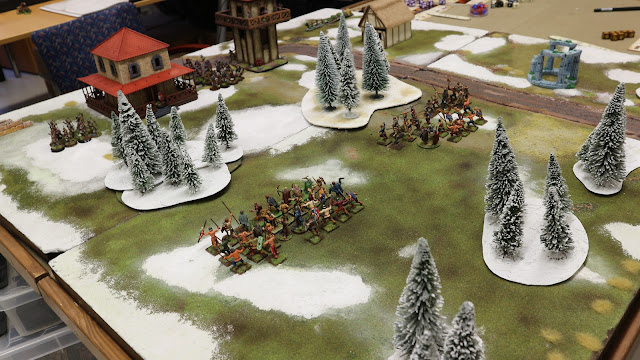 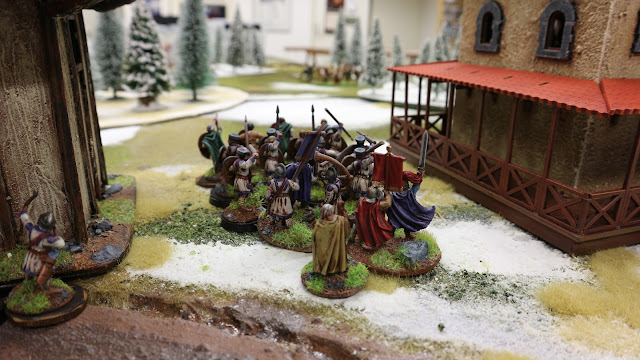 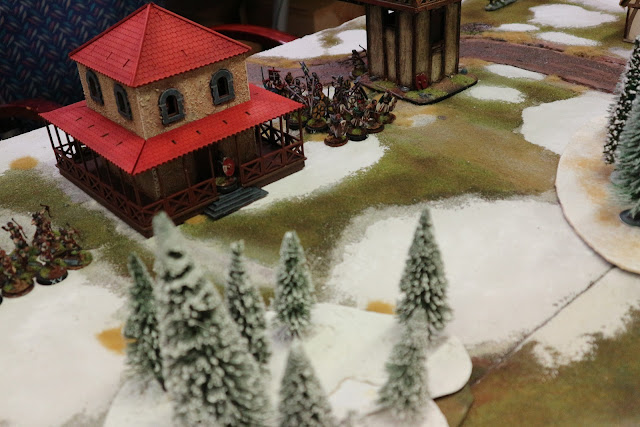 So I had the first turn, but only 4 saga dice to use. I moved forward with my troops and left some dice on defensive abilities (Scuta). That was it... 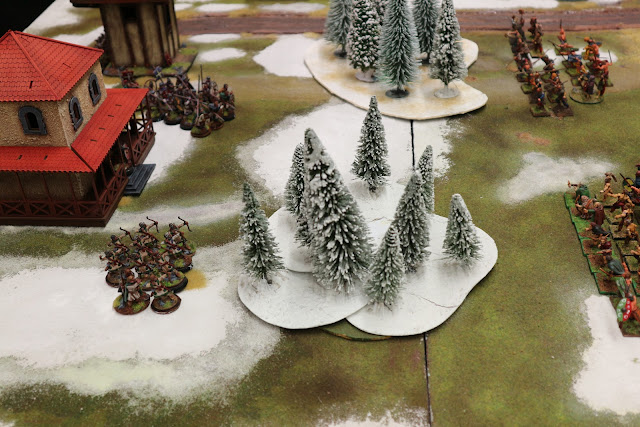 First round had been very passive and on round two action started. My mercenary hounds moved in on my left flank... 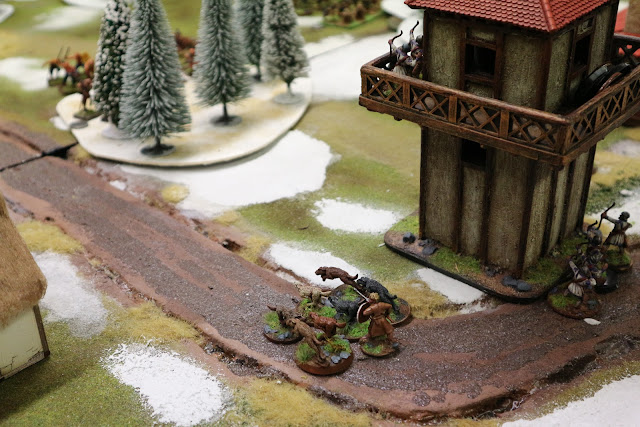 On the right flank my 10 archers had moved into the woods and peppered the enemy levies with crossbows, 3 fell. My other Archer unit also moved out of the building to get a range for the enemies moving into the opposite woods. My archers on the right were then attacked by enemy warriors, I defended but failed my saves badly and loads fell. On my next turn my HG came out of the building and charged those enemy warriors with two moves and slaughtered them. In the meanwhile Sea Wolves (mercenaries) had outflanked in and moved in the Roman Villa to loot! 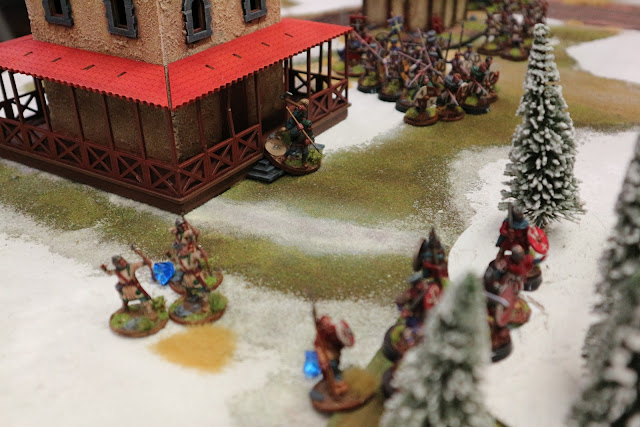 My HG taking control of the woods in the right flank. 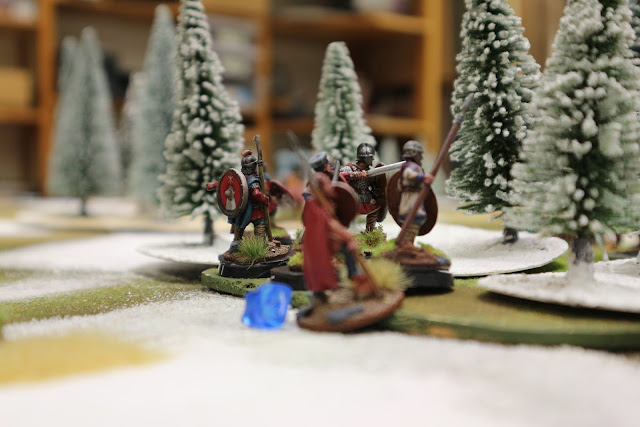 Battle for the woods continued as Barbarian HG charged my HG, whom repelled them
(actually barbarians would have won this as I interpreted a rule wrongly
and rolled better saves in the light cover). 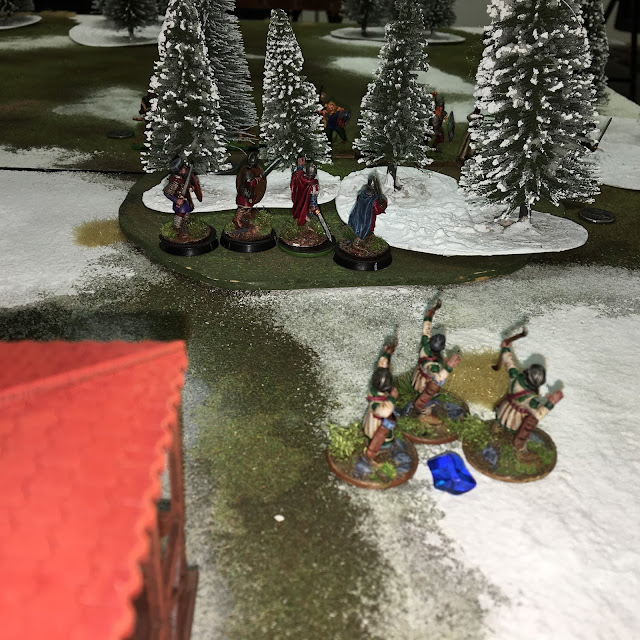 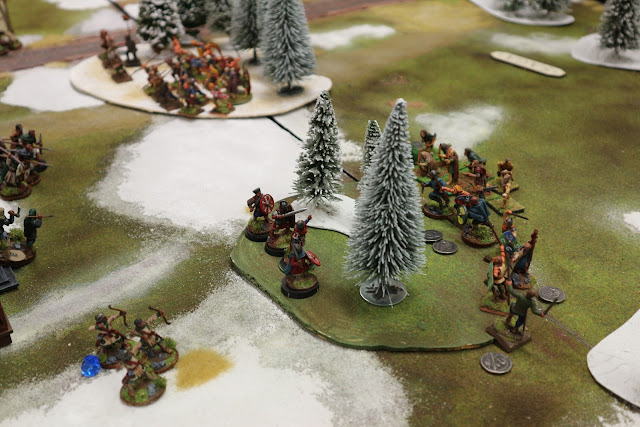 In the midgame all was still open - no decisive losses for either side. On the left flank major forces were facing one another and my hounds were moving into a flanking  position...
My priest and Centurion (WL) had taken some distance to the Villa full of Sea Wolves. 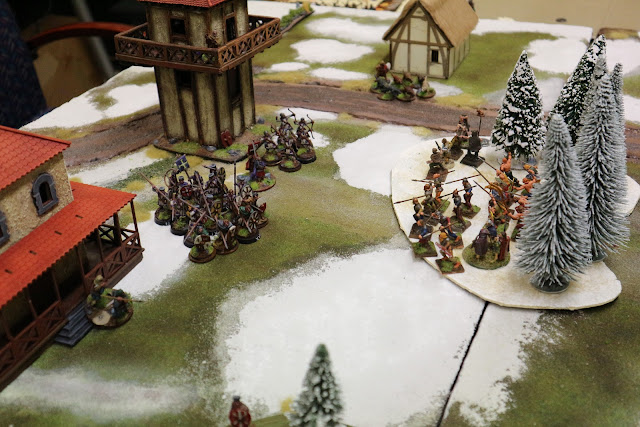 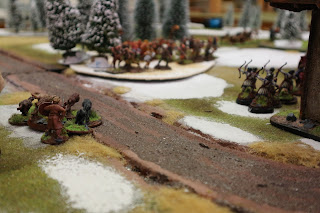 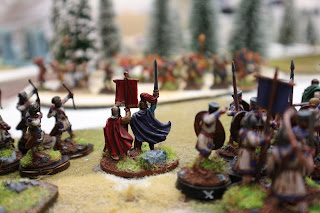 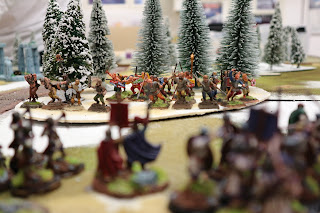 Finally Sea Wolves made their move and charged my 12 warrior unit.
Surprisingly few casualties were caused, but SW's took extra fatigue due to my Foedus - ability 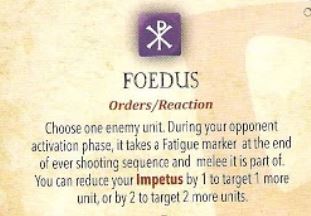 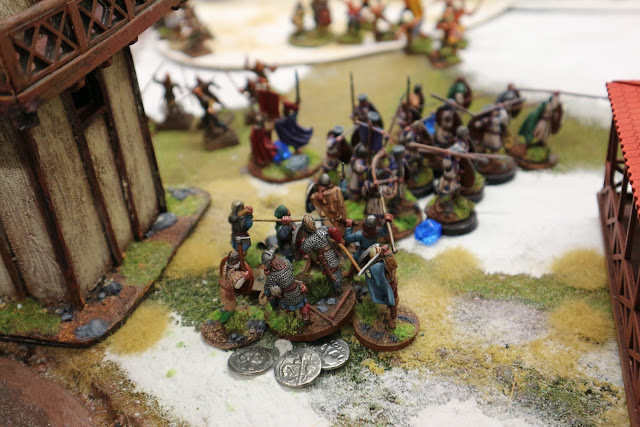 My hounds were peppered by barbarian scout javelins, but then did what they were here to do:
charged the barbarian HQ and exhausted them. Unfortunately they all died in the process (so I don't get them "half price" for next year)

Roman casualties were alarmingly piling up... 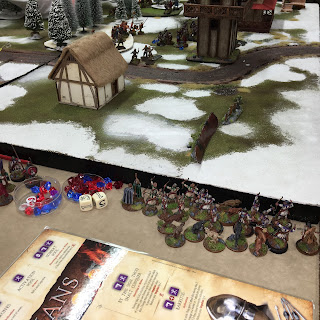 So it was time to make decisive moves and wins if I was to win over this barbarian horde! So I would need to take out their HG for fast slaughter points. Ground work had been laid by the hounds and the HG were exhausted. First my 12 man warrior unit would pepper the Sea Wolves with Plumbatae and then they would charge and wipeout the HG with my Centurion, well this was the plan anyway...

I threw my darts (plumbatae) and then realized my grave error as Mikko played his reaction: Evasion 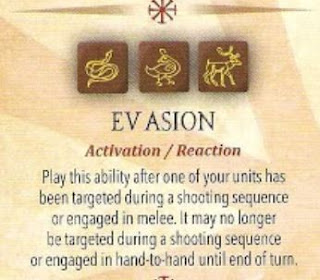 And so my 12 man warrior unit was stuck - they were too close to Sea Wolves to charge anywhere else and they were not allowed to charge them (I do now realize, that there must have been an error and one can't be within VS (= 2") of an enemy unit, unless one is charging it, so I shouldn't have been stuck, oh bollocks!) 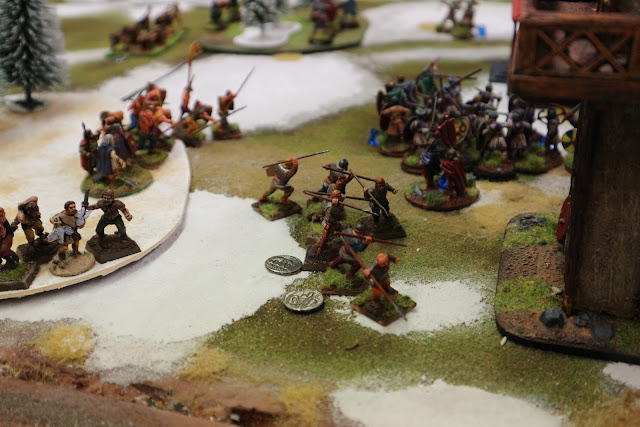 So my Centurion had to lead brave levy into a charge against the barbarian HG! And they managed to slay several of them and win the fight! Huzzah! 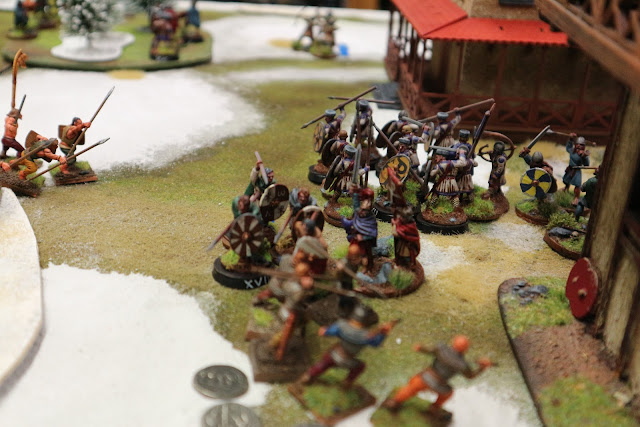 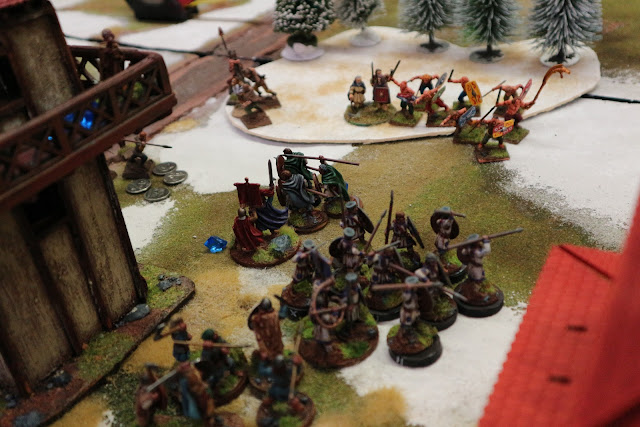 Only 3 barbarian HG were left standing 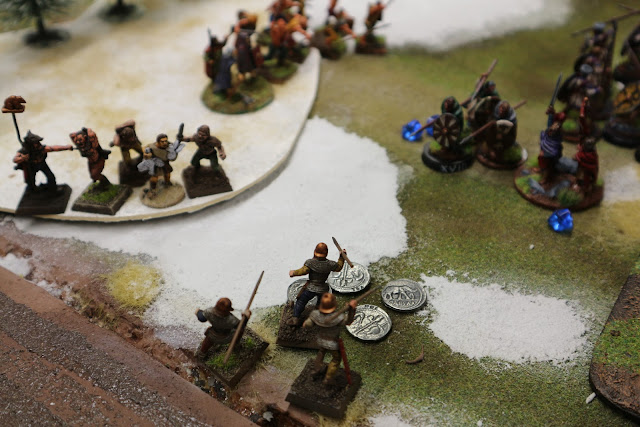 On the right flank action had died away for a while... 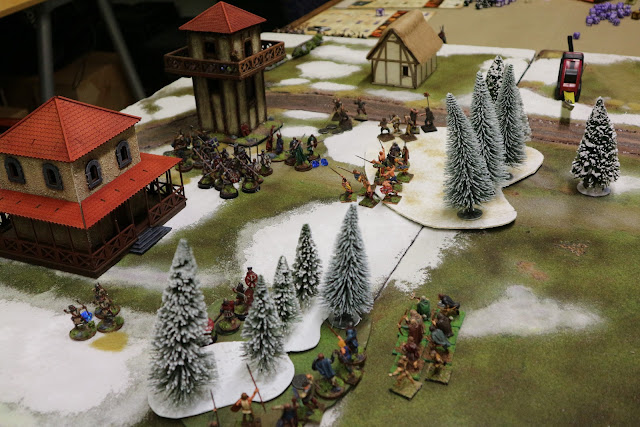 Until the Barbarian Warrior Priest commanded the remaining HG to join him in a charge against my elite... here Mikko fell into a classic trap! His HG had one fatigue before the charge and as the WP had made contact I told Mikko, that I'm using their fatigue to slow their move to VS - they won't reach the melee! So the priest fought alone, but unfortunately I couldn't take him out. 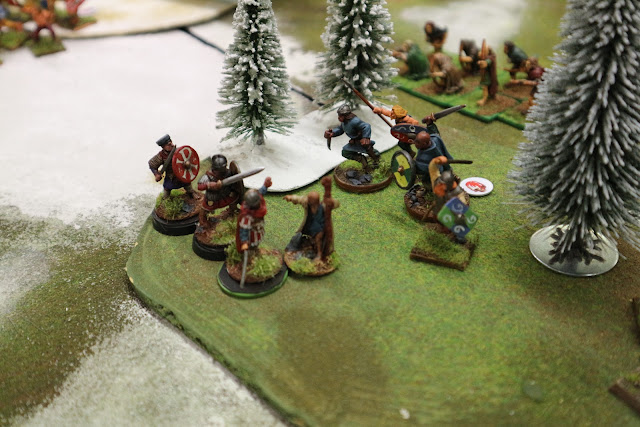 After that the HG made another charge at my HG and both sides lost some elite warriors, once again my Roman heroes repelled the enemy! 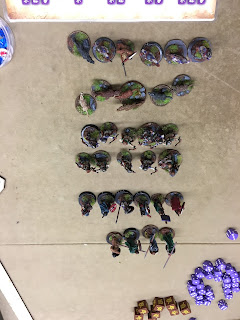 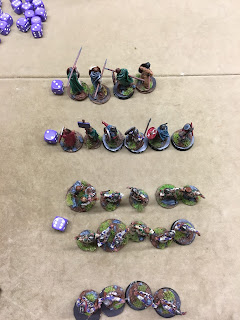 We counted the slaughter points and Mikko had a few more than me! I had managed to stem off the horde and only lost with a narrow margin, not bad! This had an impact of 2 either in raising Barbarian determination or decreasing our Morale... (Currently Rome 17 Barbabarians 11)

Could I have won?

I think, yes. I should have: