Saga: Cross & Crescent campaign round 3: tight victory to my saracens

Battle at the Jordan river (ford)

Third round continued on a second evening of gaming. Our muslim side had been so cunning that no muslim armies arrived for the game night and we got the christians to fight amongst themselves (as they historically also did).
Last night it was the right time for the saracens to make their moves as me (aka Mullah Nicodemus ibn Yahia ibn Aymaan al-Zugag) and Kalle (aka Amir Azad ibn Aijaz ibn Arman al-Manna or Kallah in short) moved to encounter Aleksis' (aka Baron Alexis du Rich d’Ibelin, le seigneur de Nablus) crusaders and Sami's (aka Hochmeister Samuel von Hauck von Der Orden der Brüder vom Deutschen Haus Sankt Mariens in Jerusalem) Milites Christi. Yes we have cool thematic campaign alter egos ;-) 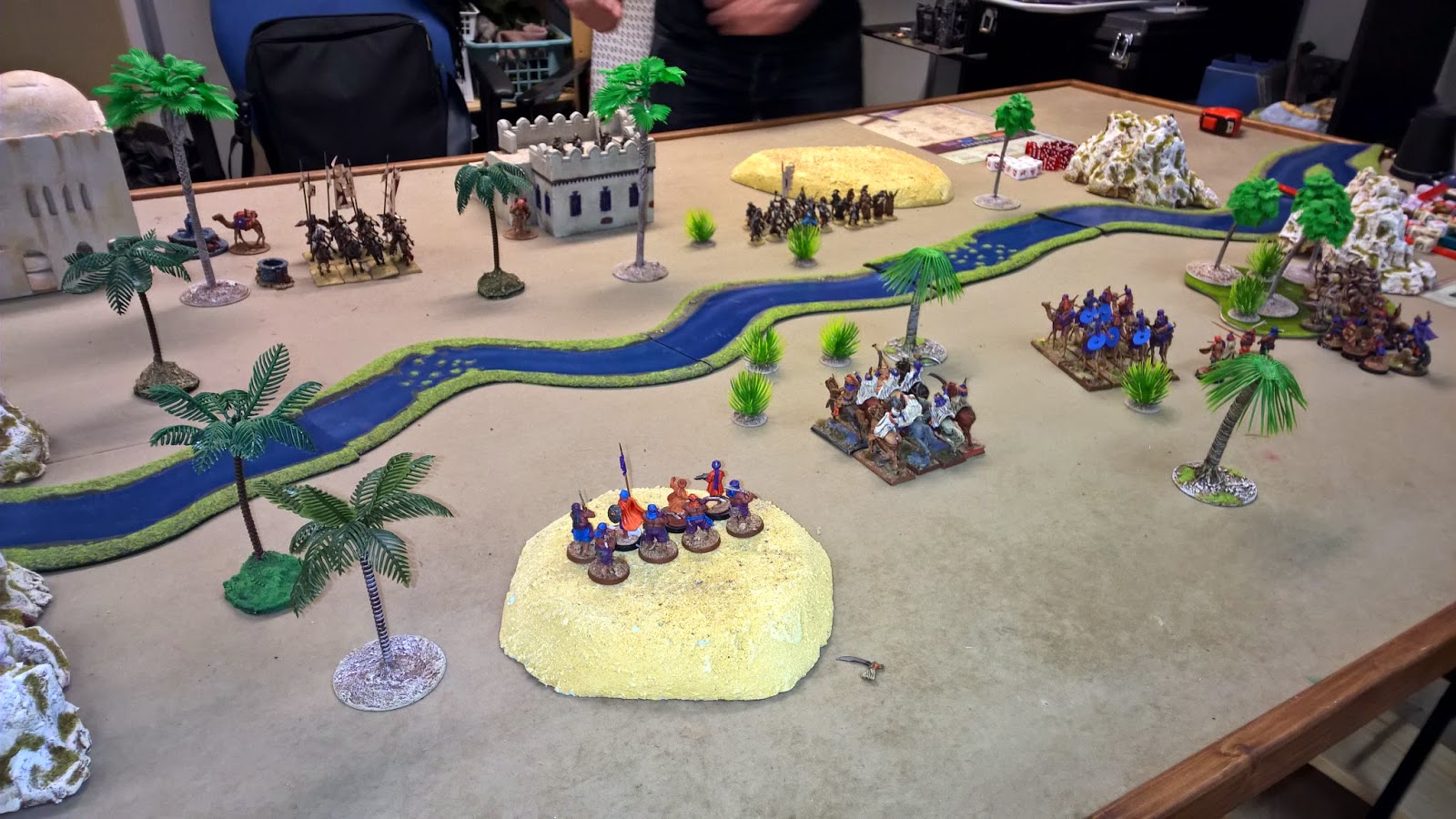 My 6 point warband consisted of:

So we started by placing terrain; both players chose 3 pieces of terrain. My plan was to get two forests on my side, where my archers / warriors with nafta could hide from crusader crossbows and cavalry. In general my plan was to whittle the enemy my my superior shooting and if anyone dare to cross the river, I would counter by torching them with nafta!

So I got my two forest. Worryingly Aleksis placed a building within 12" of the crossings... too damn good hiding place for his crossbows! (not a surprise, that he deployed them there) 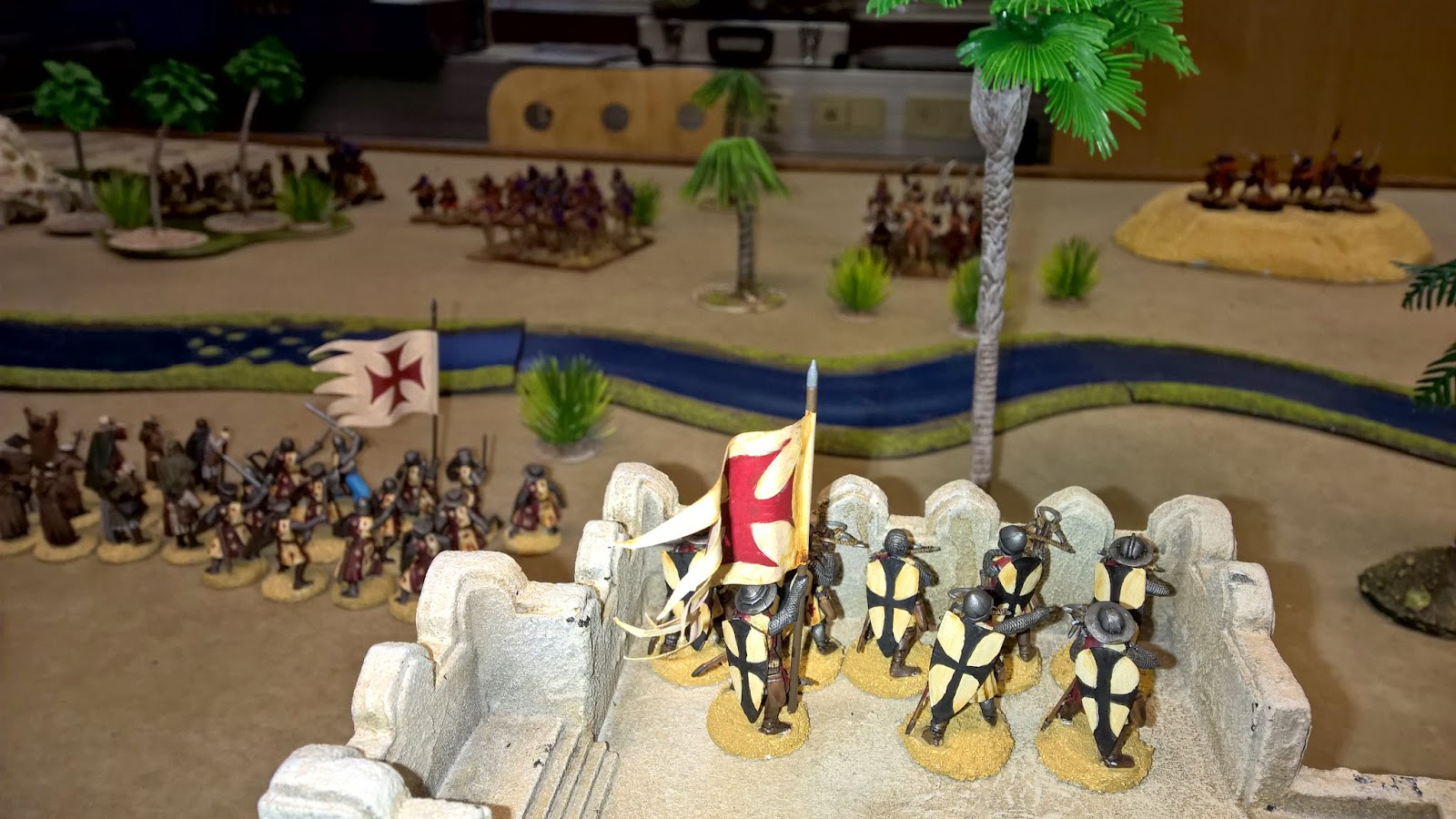 So, we moved on to the rolls for changing the terrain. Aleksis succeeded in deleting my central forest (damn) and I countered by moving his central building further away from the river - effectively deleting the 12" killing zone to the crossings. Yes, I know what crossbows can do (and they eventually did).

My deployed followed my plan: be ready to _move_ into shooting positions and at the same time deploy far enough, so that crusader knights can't reach me during their first round (without getting many fatiques anyway). So my levies and one warrior unit hid in the forest and my cavalry deployed slighty closer, in order to reach firing distance in 1 move.

Aleksis deployed his deathstar of 8 knights on his right flank, facing one crossing and most of his army near the other crossing close to his left flank. Crossbows deployed in the central building.

Aleksis (aka baron of Ibelin) got the first round. Luckily I had rolled well for my 3 saga dice and immediately caused two of his units (knights and crossbows) to take fatique. I had also placed a die in the saracen trick -ability, which effectively paralyzed Aleksis' knights for 4 or so rounds (and I think won me the game).
My counters lead to  a very short round from Aleksis: he spend 4 dice to gain further virtues and succeeded in unlocking the purple (= best) virtue immediately... ouch. Then he rested with the units, that had the fatique amd that was more or less it. No movement.

In my first round I proceeded as planned: Bedouins rushed over the river and peppered pilgrims with their javelins and then retreated - hit & run! My bow-cavalry proceeded to the river edge and opened fire against foot sergeants, levies moved out of the forest to reach firing positions, since it seemed that no crusaders would cross the (my) right flank crossing anytime soon.
The Saracen trick ability stayed on by board and kept paralyzing crusader knights (if they had moved, they woud have ended within my shooting range, across the river). 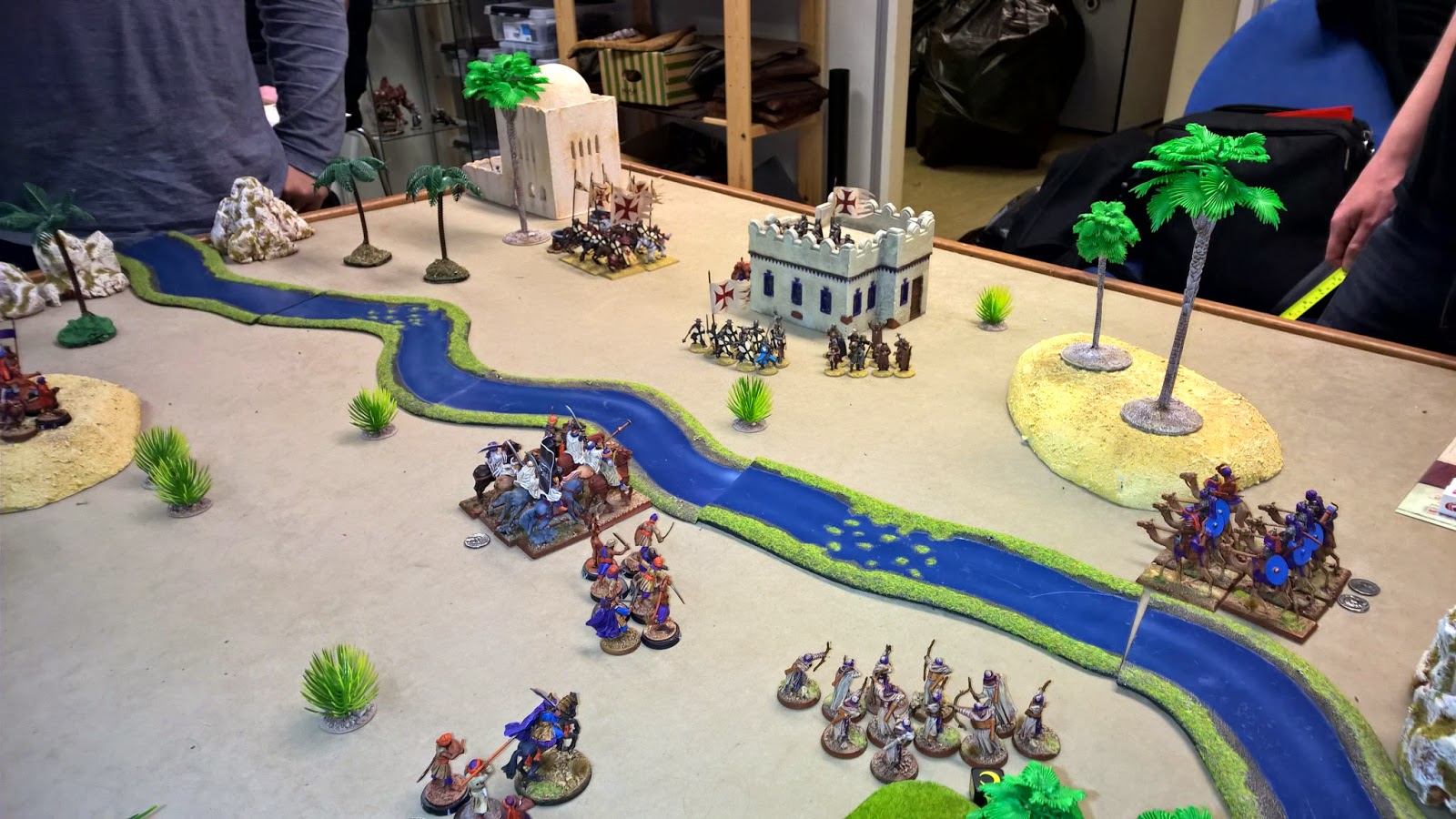 Situation after the first round.

In the round two, Aleksis saw an opportunity and moved his crossbows out of the building and in two rounds of shooting annihilated 5 of my 8 eight mounted warriors... ouch! I countered by another hit and run from bedouins and shooting from levies. Slowly but steadily whittling them down. My remaining mounted warriors galloped to extreme left flank and stayed there to ensnare the crusade cavalry with Saracen trick, should they eventually decide to take part in this battle! 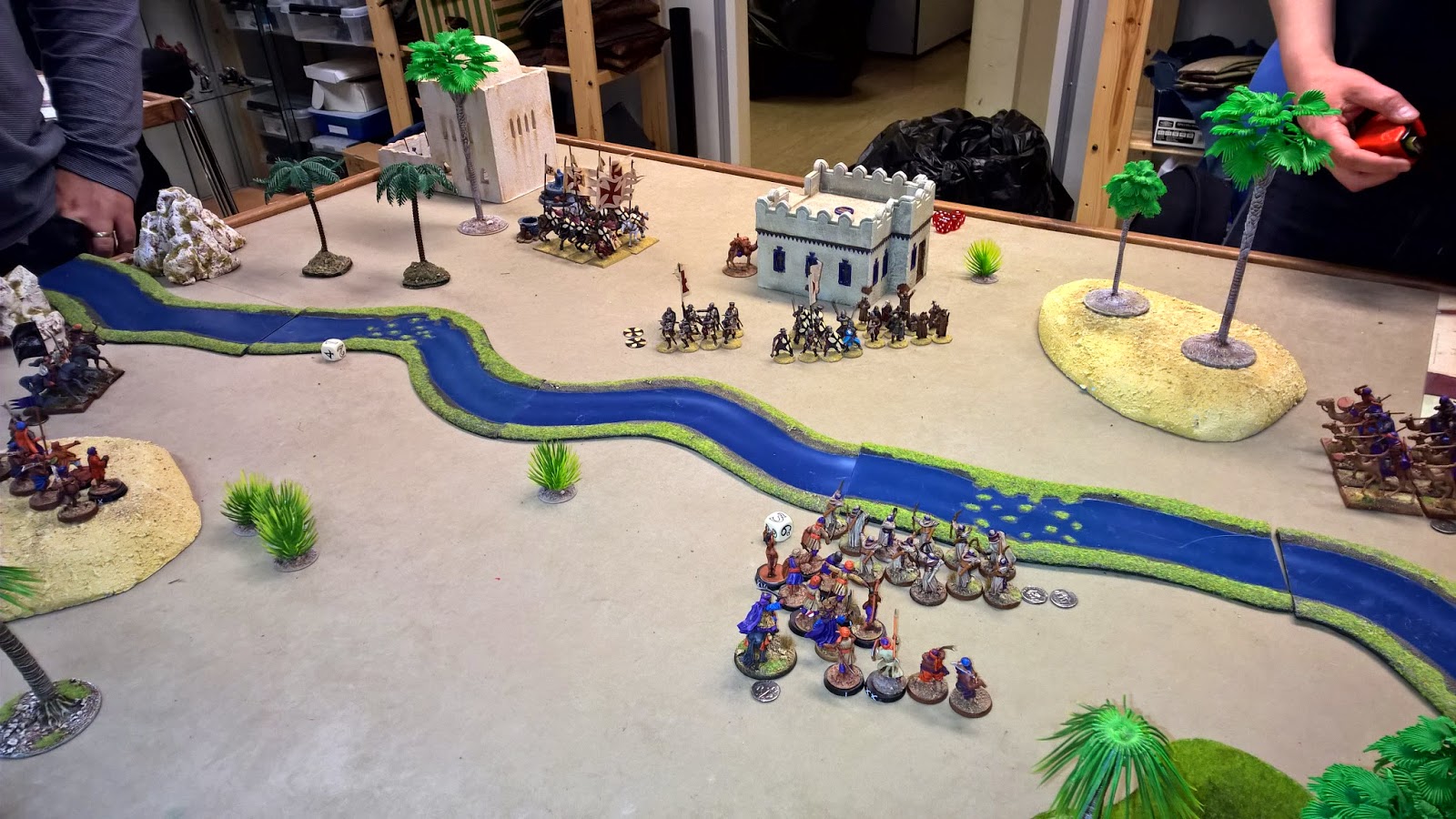 This exchange of projectiles lasted a while and then I got bored and decided to make a somewhat drastic move: my warriors with nafta-dudes jogged over the river and proceeded to flamber crusader crossbows to 4 warriors remaining with 4 fatiques. Crossbows were now effectively out of the game and with that there were no more shooters in the crudader army. Pilgrims charged bedouins but lost the combat and retreated. Bedouins also retreated since we were playing on points of troops that were across the river in the end of the game.. 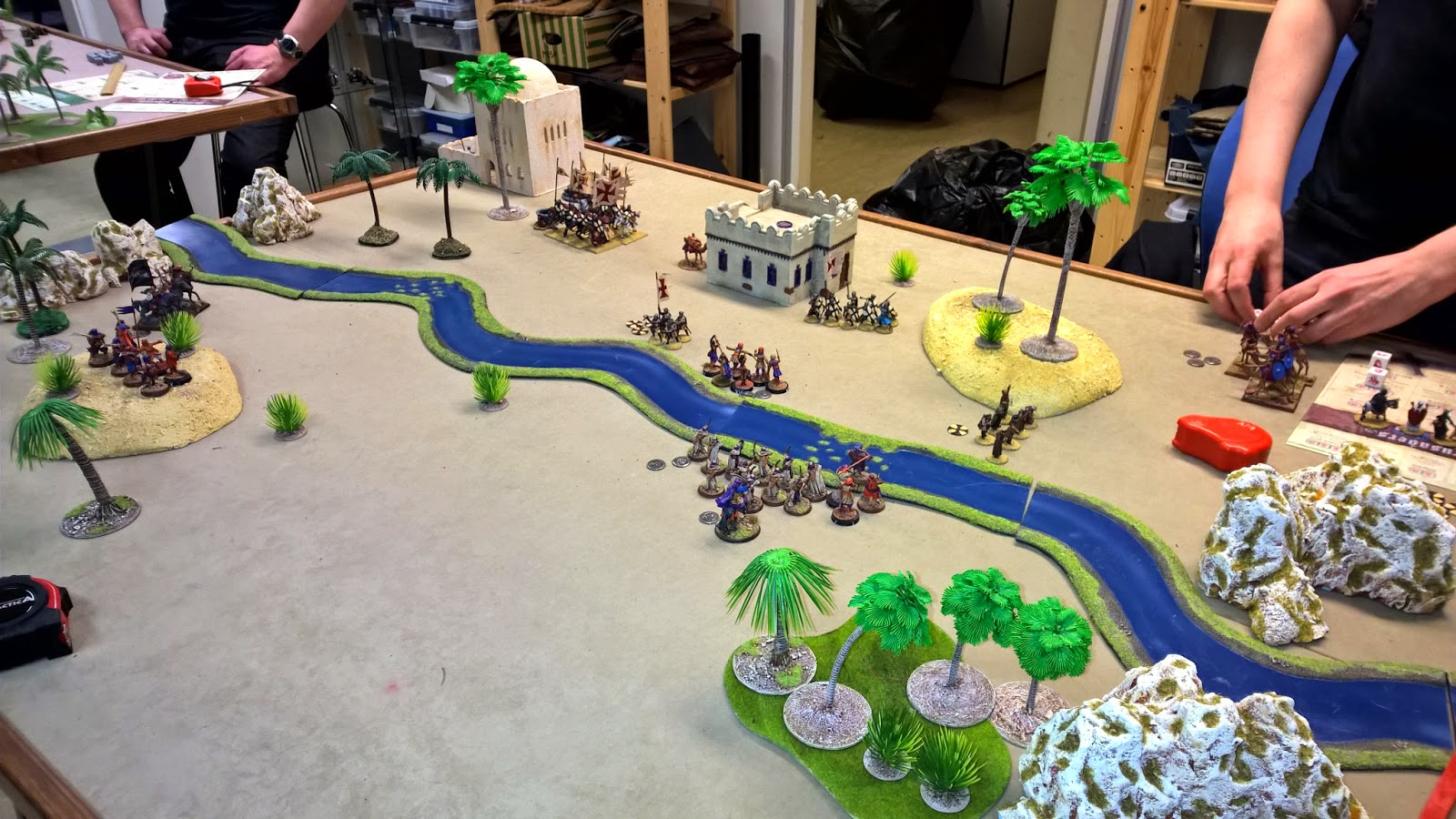 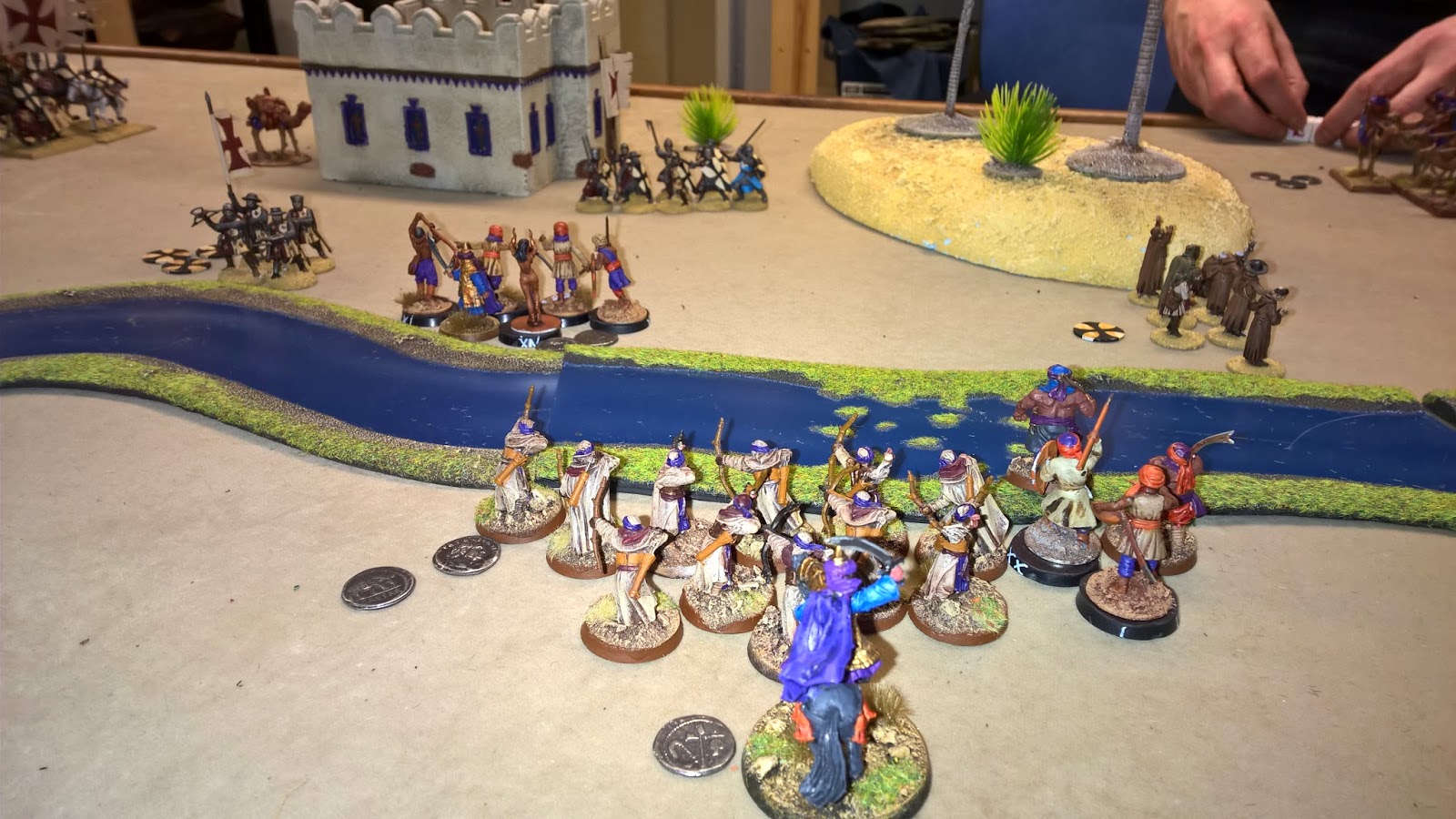 Saracen warlord leading from the back... and pondering on decisive moves...

From there on, the game got so intense that i forgot to take pictures! Thinks started to really roll like an avalanche! Baron Ibelin cried out "CHARGE" and dashed forward! BUT he fell over, tripping on his over sized sword (= I used his fatique to shorten his movement). His loyal warriors carried their charge home instead, but due to everybody laughing at Baron Ibelin, no casualties were scored in the fight and sergeants retreated. Baron of Ibelin got up and he was pissed. He charged my warriors again and slaughtered then to the last man. Yes he was boosted with couple of abilities and had 10 attacks etc.

In the meanwhile the stalemate in the left flank finally came to it's end: Aleksis activated his knights, whom dashed forward. To my shock I realized / learned that the hill were my warrior unit with the last two remining nafta dudes were sheltering, was no shelter (= not open ground hill), but just an elevation and wouldn't hinder the knights at all. 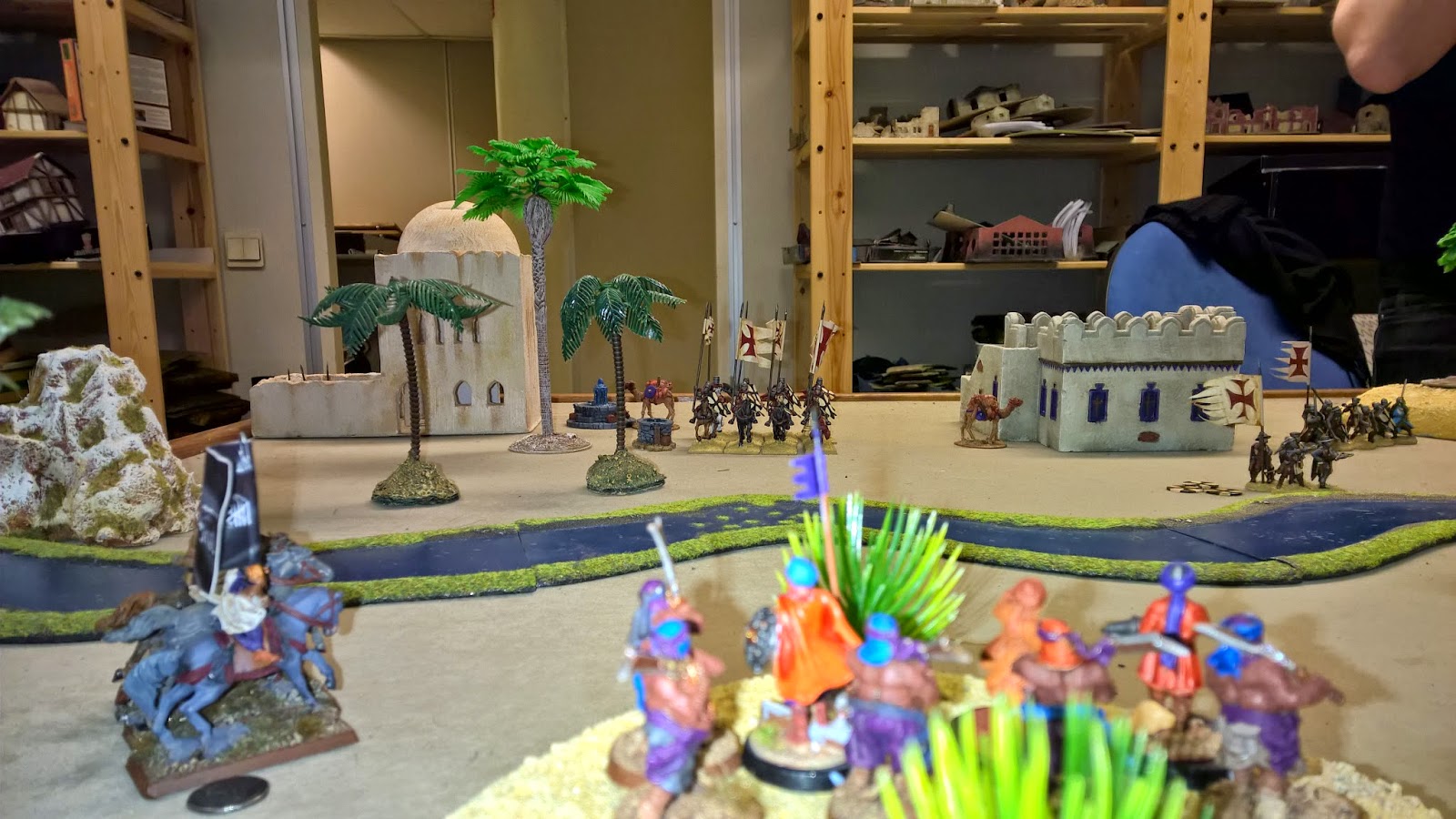 Luckily Saracen Trick, that had stayed on by board throughout the first 4 rounds, lured the knights from their target and they proceeded to annihilate my mounted warriors, whom sold their lives dearly.

Unfortunately the knights had one more activation left and roaring in their blood frenzy charged up the elevation at my horrified warriors. BUT now they were fatiqued and my warriors were not. I swapped half of my attack dice to few extra defence dice and of course increased my armour to 5.

This worked as I wanted it to work: two warriors survived the melee... and how surprising, my warriors had shielded their nafta wielding brethen!

My next round (5th) started with not so many Saga dice being generated, but luckily "Omens" helped
me. My nafta-dudes proceeded to avenge their fallen brothers and in a suicidal manner scorched the knights AND THEMSELVES in two consecutive shooting activations. Knights were left with three models moaning complete devastated with six fatigues. They were effectively out of the game, but they were on my side of the river, scoring three points.

In the meanwhile my warrior unit of 4 and my Bedouins almost finished the pilgrims and proceeded deeper into enemy territory,

My warlord had been stuck on the riverbank throughout the game, he couldn't move over the river, because that would have lead to a duel with the maniac called Ibelin with 10 attacks and an over sized sword... Then he realized: If I can't cross here I will go and decimate the remaining, very exhausted knights! In two moves he charged them and scored three hits with his 5 attacks! BUT, alas Aleksis saved them all and Nicodemus (WL)  bounced off. In the next round Aleksis played them safe by putting dice on the ability that allows his crusaders to remove all fatigue in the end of a melee. Instead of helping them to do that, Nicodemus rushed over river to score 3 points.

It was time for the last, 7th round. Baron Ibelin poured over the river with his 3 remaining warriors and butchered my levies until there were only two of them left.

At this point we stopped to calculate the current points - the score was even! I cursed the fact I hadn't managed to kill a single knight with my WL! So it was no up to my two last levies and bedouins - they HAD TO kill at least one sergeant to tip the scale to saracen victory, but my levies were exhausted from the melees and I only generated 2 saga dice (from warlord)!

Once again activation pool and "Omens" ability came through for me and I got several crescent-symbols. I placed three dice on levy activation, one to get +1 to hit for shooting and two to combat pool. First some rest and then... First round of shooting: 2 shots (with one die from CP), Aleksis used my remaining fatique to improve his armour... no casulties. Second shooting activation: two shots (1 from CP) and the piercing shot -ability. Two hits scored AND 1 CASUALTY! Allah be praised, victory is ours (I would still have had the bedouins, but we called it a day).

One of the best Saga games I've ever played! Thanks Aleksis and thanks Nafta-dudes!
Lähettänyt Teemu klo 11.10