So round 4 started and I was eager to keep playing!


I wanted to play the scenario Assault at Dawn (C&C page 112) and got Mikko (a rather newbie on Saga) and his crusaders as my opponent. 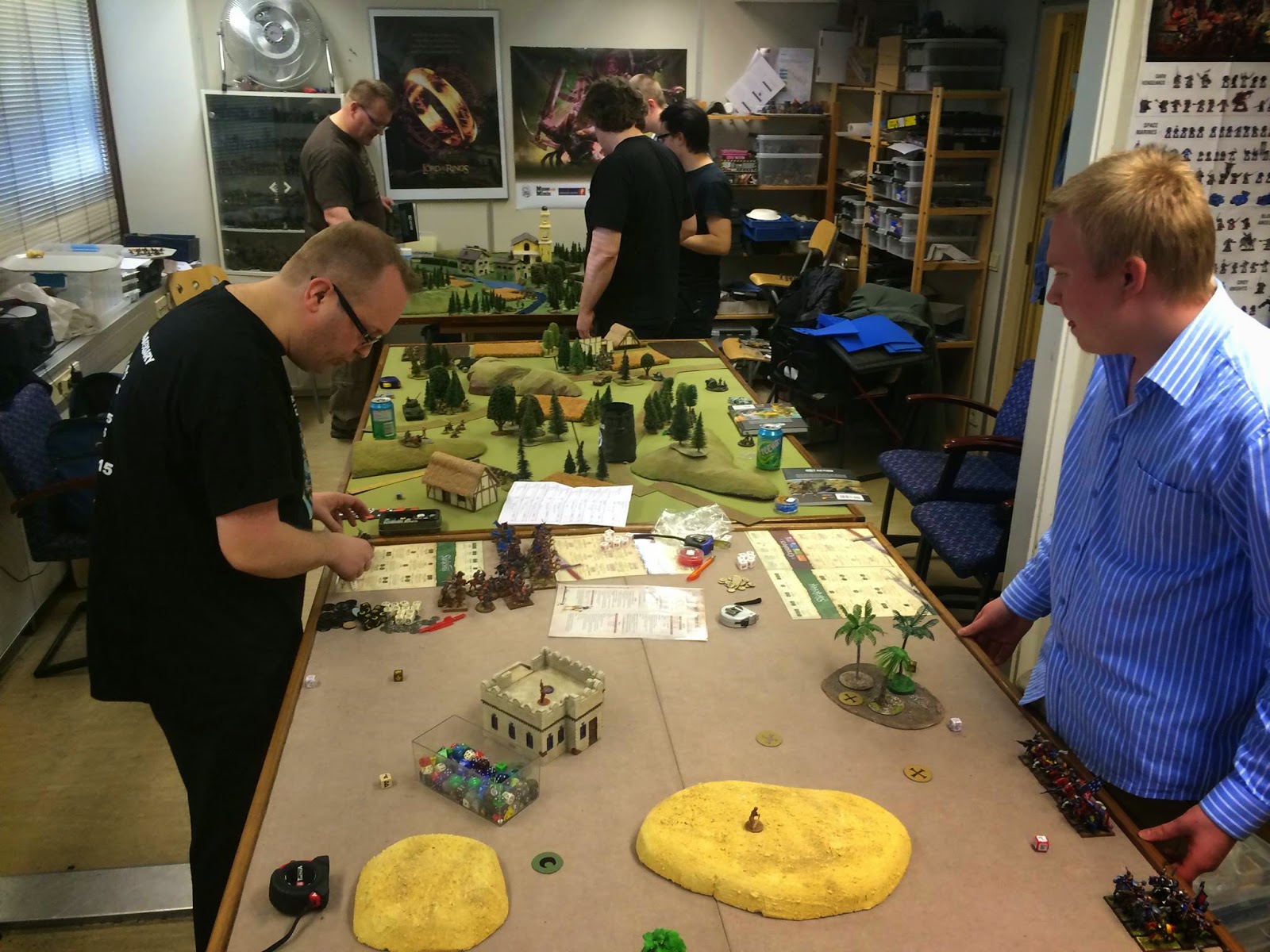 Table is set and unit counters deployed - good to go! (Myself on the left)


Mikko had signed up, put his warband was still "in progress" and hence this was his first game of the campaign. I was kind enough to borrow him figures to get going with the campaign. Since all miniatures on the table were mine, how could I loose? Also, since Mikko was still rather new on Saga, I decided to be rather gentle - didn't even bring any Nafta-dudes to play!


Our warbands were as follows


Saracen -all mounted, all shooting

(Later we learned, that crusaders can only have 1 unit of mounted Sergeants, but who cares)

OK, my army was very shooty BUT very fragile in melee. Without nafta as a terror-factor, I needed to be even more cunning! I decided to try to split the crusader army into two sections and while slowing down the other half, try to hit the other half as hard I can with a combination of shooting and overwhelming close combats.

I chose 3 elements and Mikko 2. Mikko placed a forest on his table edge and a building on my side. I placed a rather big hill (difficult ground) in the middle of his side, a forest and an elevation  on my side. Mikko succeeded in moving the big hill, but there wasn't too much room (he should have removed it!) and I also moved forest on his side a but further away. 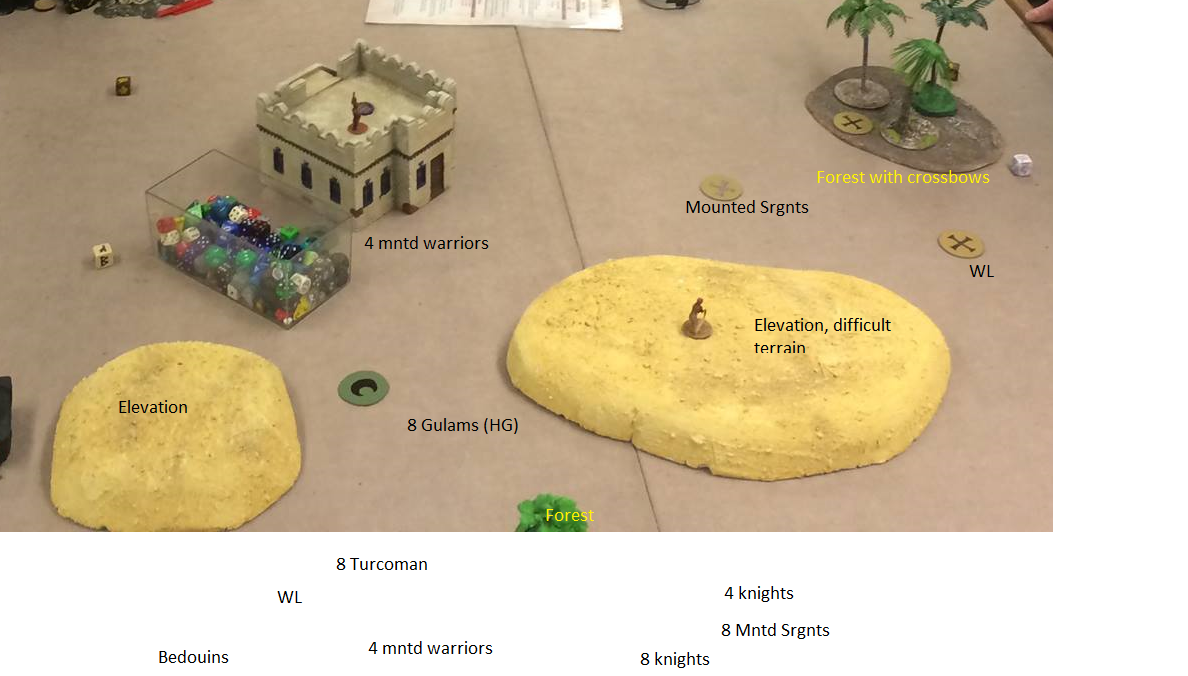 I knew I had the first round so placed my best shooting units in the range for striking after one move. Both 4 warriors units were deployed in a blocking position: one on the left, next to the building to stop anyone coming through (units must stop when they come within 6" of a unit counter, then the counter is replaced with the unit) and the other on the extreme right. Since Mikko placed a counter in the forest rather early (whom obviously were the crossbows (only on foot unit), it was easy to play refused flank and put almost everything on the other flank. My blocking 4 warriors and the large elevation effectively separated Mikko's WL and 2 units.

So I got the the start and managed to roll 3 X "Allah" on my Saga dice (Allah = rare symbol on muslim dice), this lead to 7 dice on ny BB with the following set up: 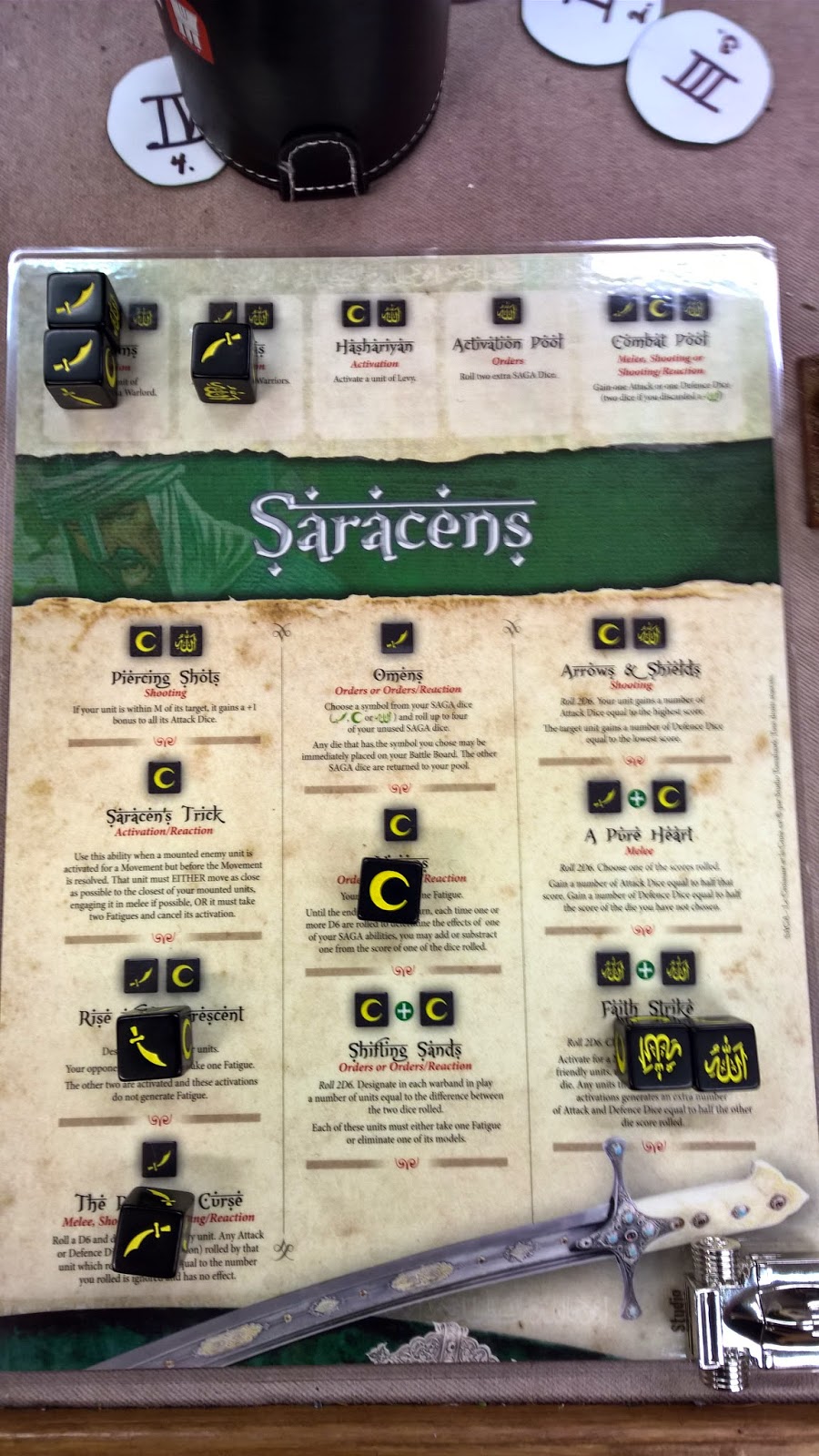 Hence I just had to reveal all of my units except the two 4 men warrior units. I immediately proceeded with my plan and started a barrage of missile fire on the crusading knights. Bedouins killed 3 knights from the big unit on the right (and then retreated). My Gulams (HG) and Turcomans peppered the unit of 4 knights and killed 2. Then my WL and 8 gulams charged the remaining two knights with "Faith strike)... I already felt like the game was already "in the bag"!

Then, obviously the dice gods punished me for my arrogance! I generated altogether 35 attack dice, managed 2 hits against the knights and eventually caused 1 casualty. Knights killed 2 or 3 of my fragile gulams. OMA (= Oh My Allah) and won the melee with 1 knight remaining on the table!!!! With mu final moves I retreated with my WL and moved turcomans back to the front to screen the gulams from an expected revenge... 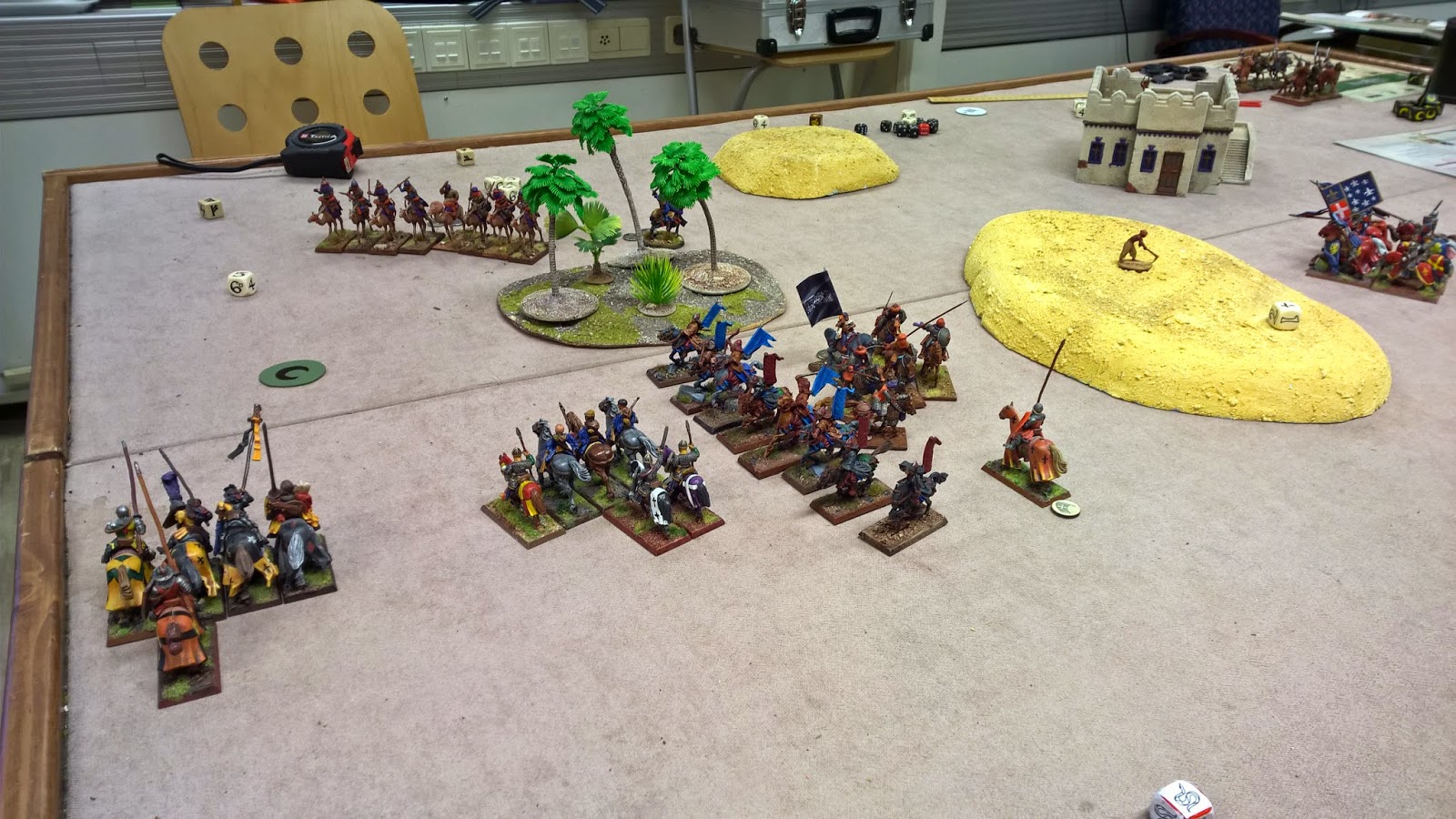 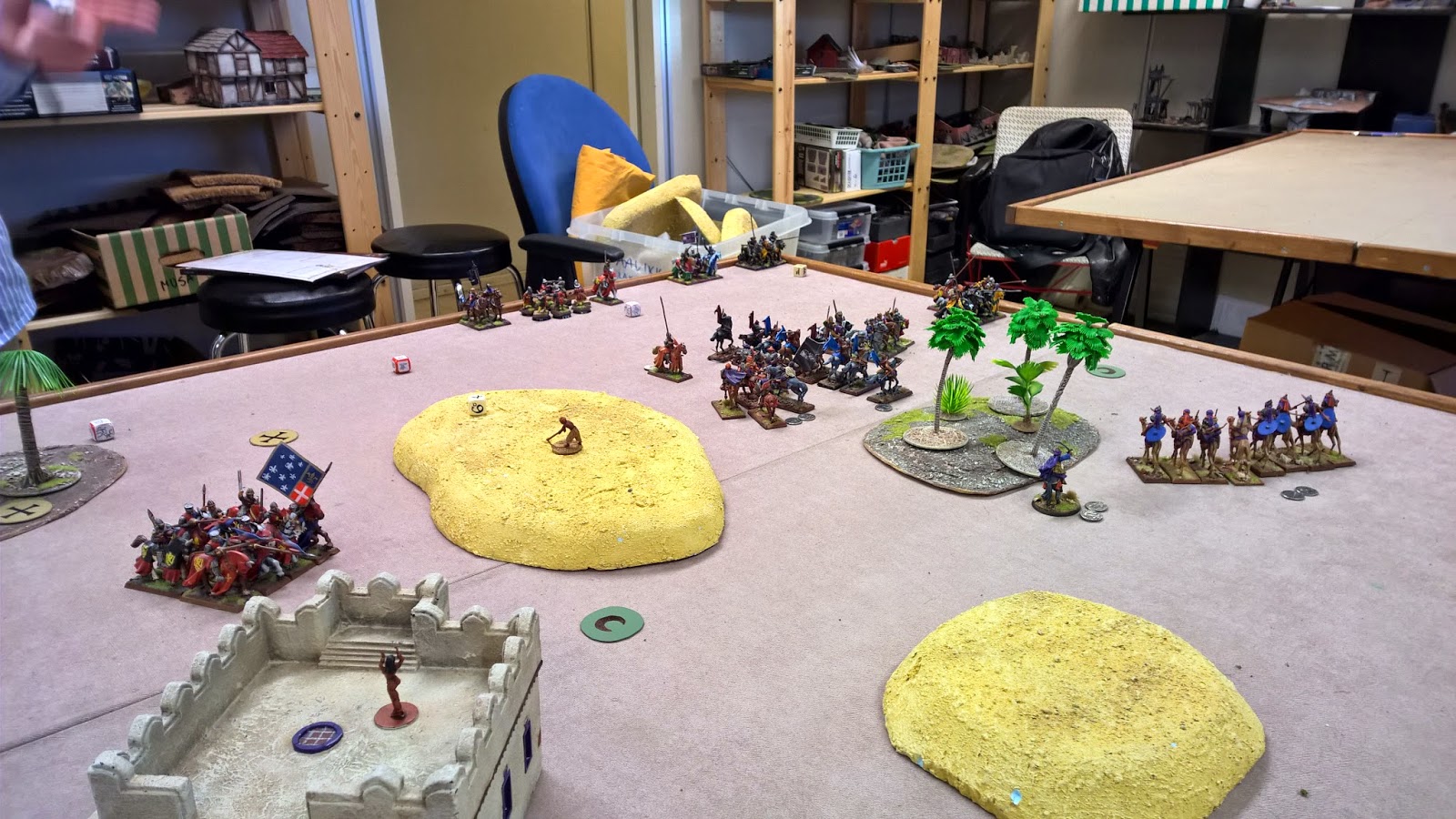 Mikko was a bit terrified by my shock start, but he was still generating full amount of Saga dice and came up with this set up on his BB: 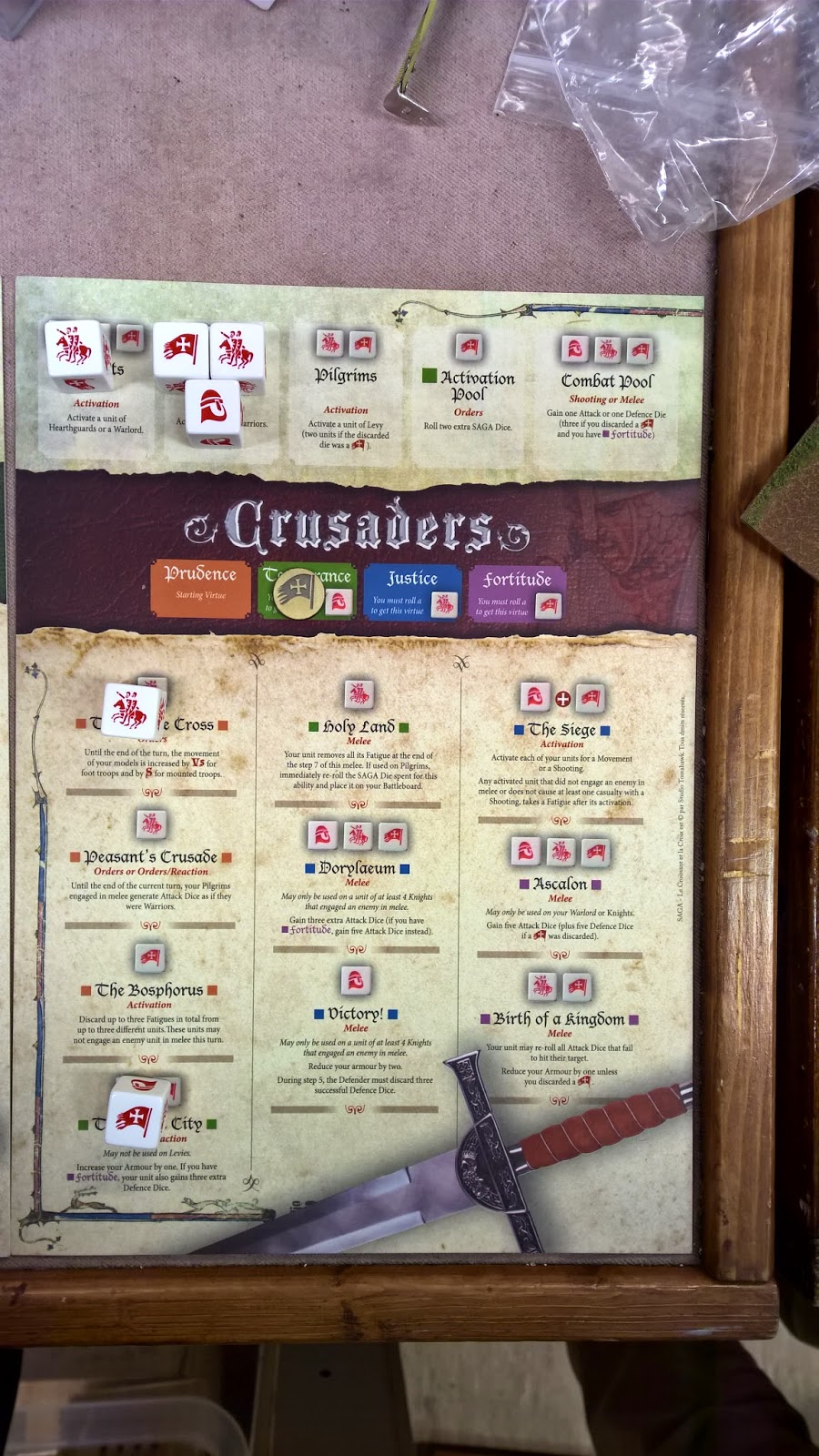 Crusader's revenge was swift; his large knights moved with the speed of the cross and charged my Turcomans twice. Turcomans didn't really fight back and managed to do their job: protect the gulams - and died in doing just that. On my left flank the blocking warrior unit did also what was expected: they stopped the progress of Mikko's 8 mntd sergeants... unfortunately they also died while doing their duty for Allah (and me)... 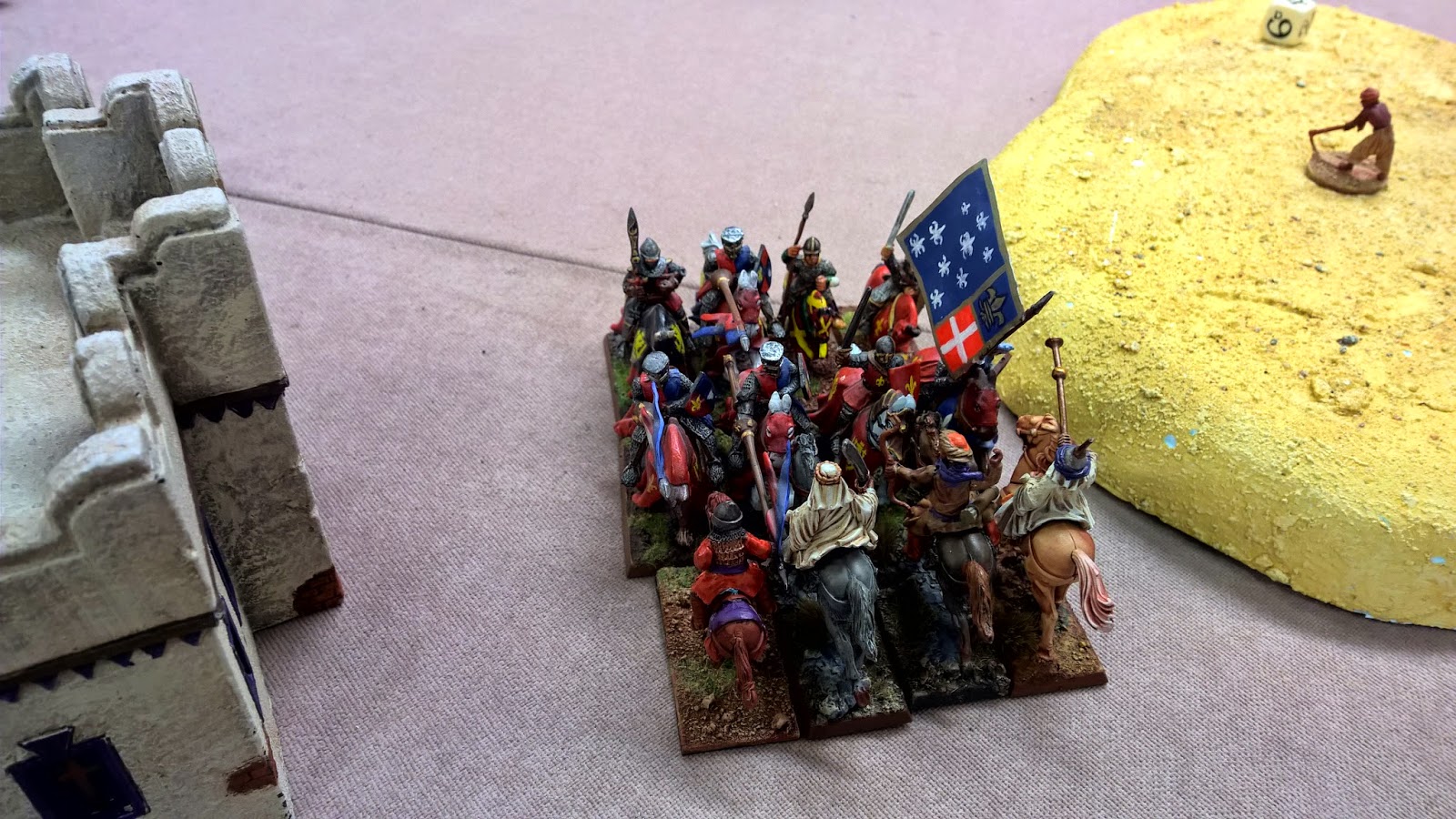 The lone serf watching in terror as brave Saracen warriors are cut down by mounted sergeants!

My second round was full of shooting once again as the BB dictated: piercing shots &  prophet's curse and all activation dice on gulams. Mikko tried to protect himself with an ability to improve armour against shooting and using my fatique, but it wasn't enough; after a barrage from bedouins and gulams his big knight unit was reduced to three knights and his large sergeant units as well. Then Kilij Arslan and my gulams charged the remining knights and  Kilij charged them again (they were now exhausted) and finished them off (one bedouine acted as a meatshield). This generated one more fatigue to Mikko's unit of warriors.
The bedouins are playing their trick: "hide in the bush and whittle enemies down with javelins"... enemy cavalry don't really want to charge camels in rough ground... 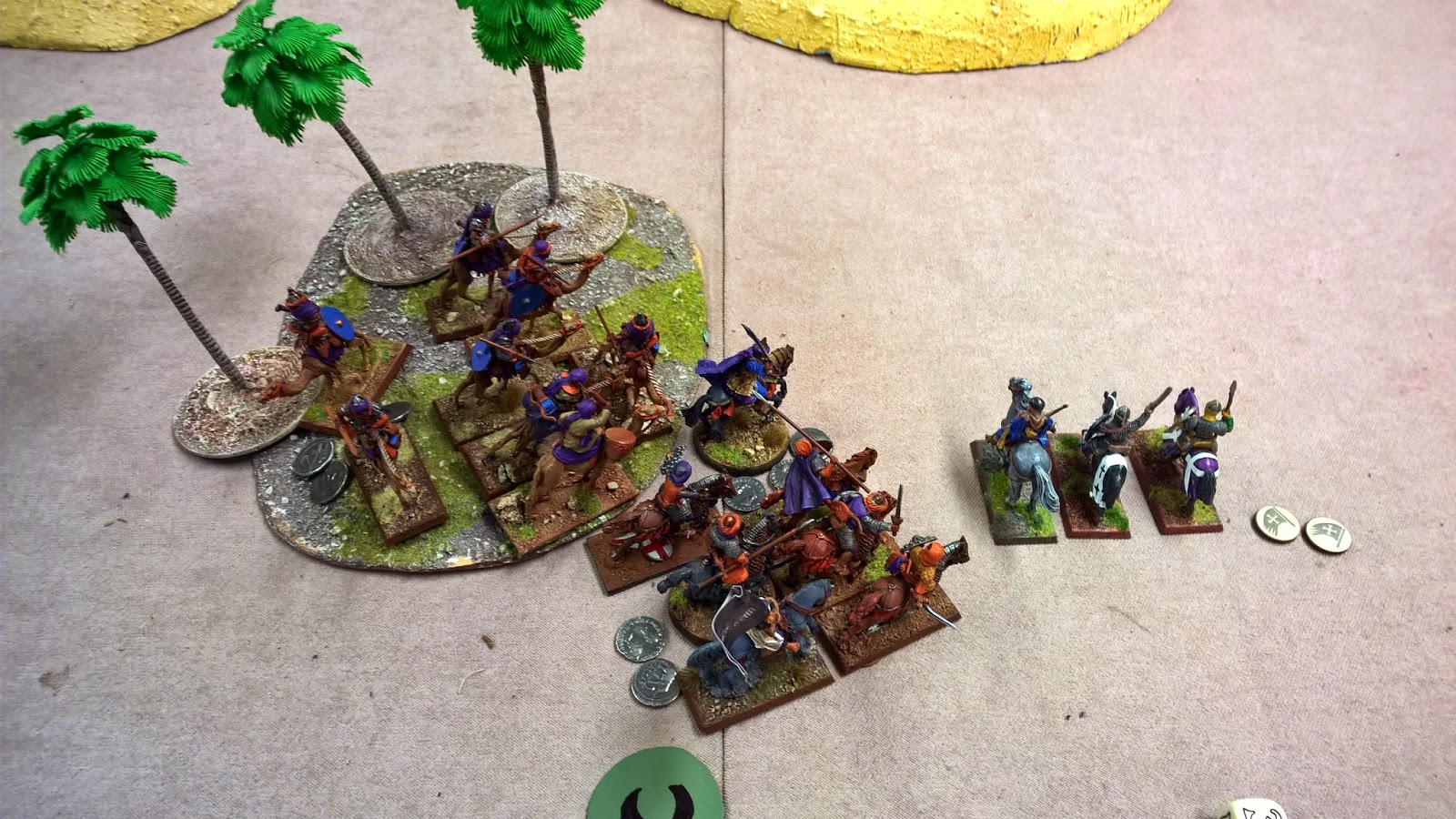 All crusader knights slaughtered... where the heck is our warlord the warriors are thinking!


Finally The crusader warlord and the crossbows realized that their comrades were being decimated on the other side of the hill! They must have been slow in waking up after last nights drinking! 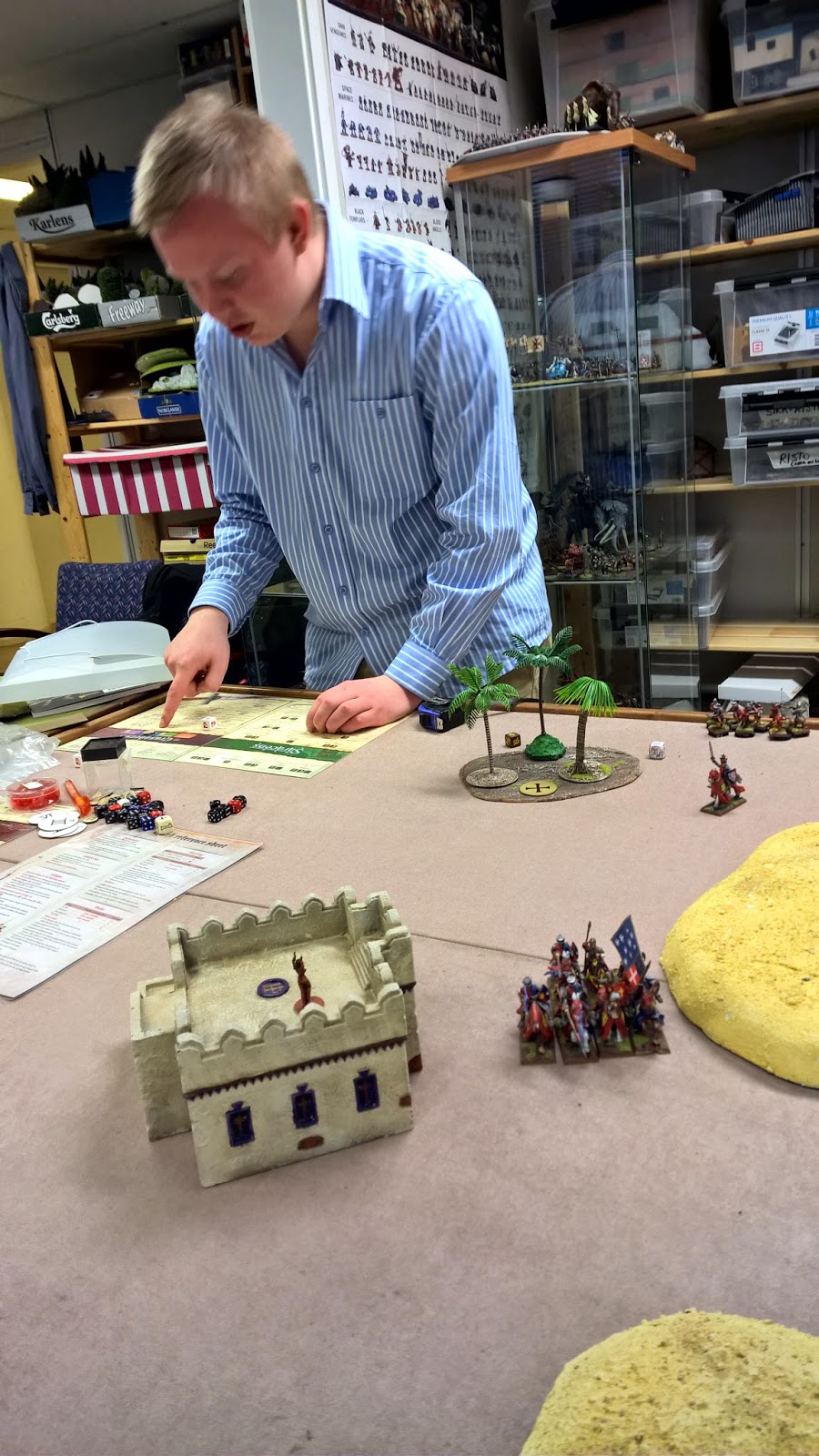 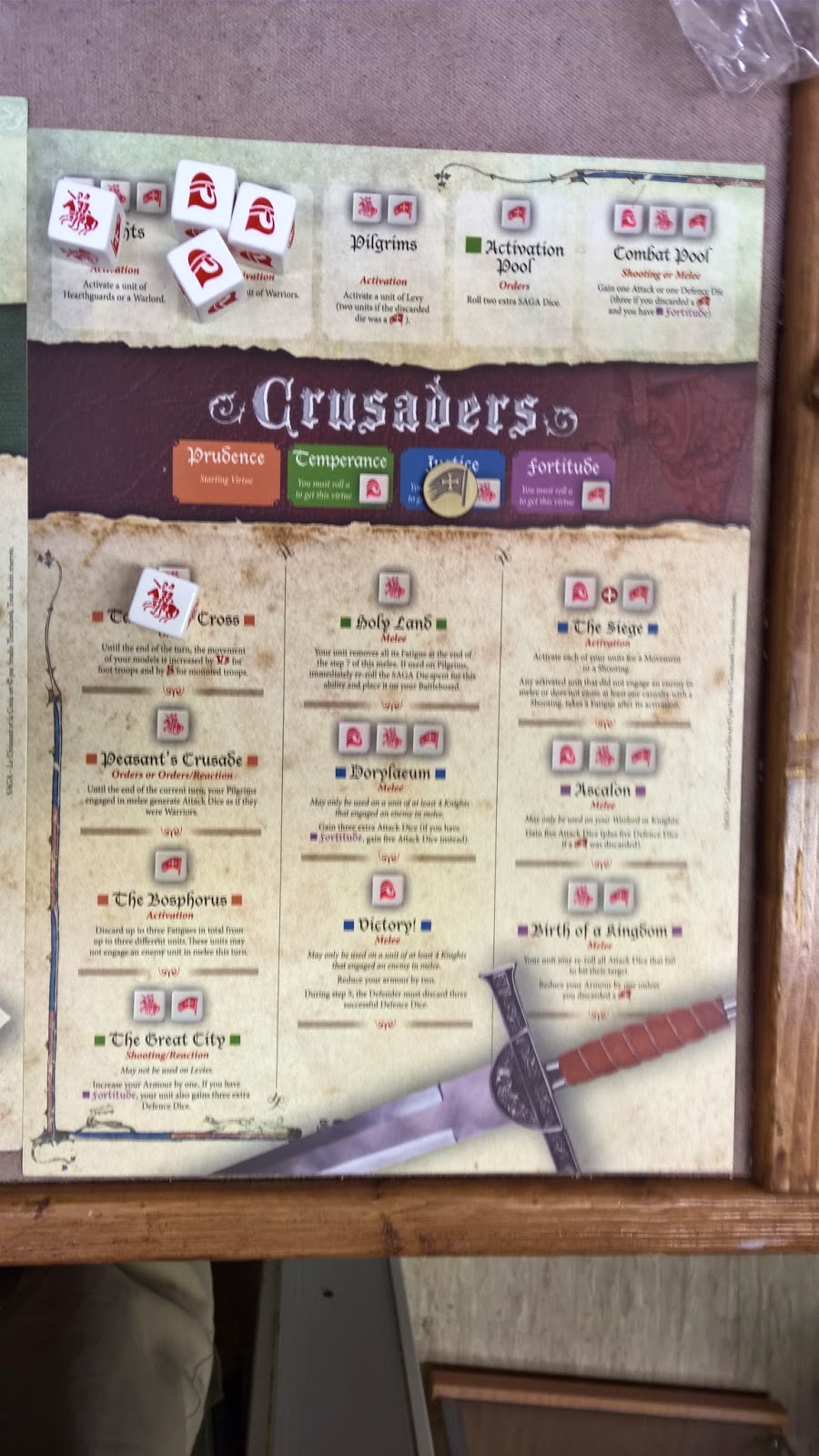 MIkko's BB for round 4: hurry warriors!

Mikko's warriors and WL finally rushed to where the fighting was actually taking place! They catched a glimpse of Kilij finishing the last knights off and charged forward with incredible speed screaming "Revenge!".
Kilij valiantly stood his ground (ok one bedouine died) and then slipped into the forest...

My fifth (?)  round saw the "Omens" ability once again coming through for me and filling my BB with common symbols (the sabre-symbol). Beouins and Gulams shot the warriors to bits and then gulams charged and finished of the smaller warrior unit. 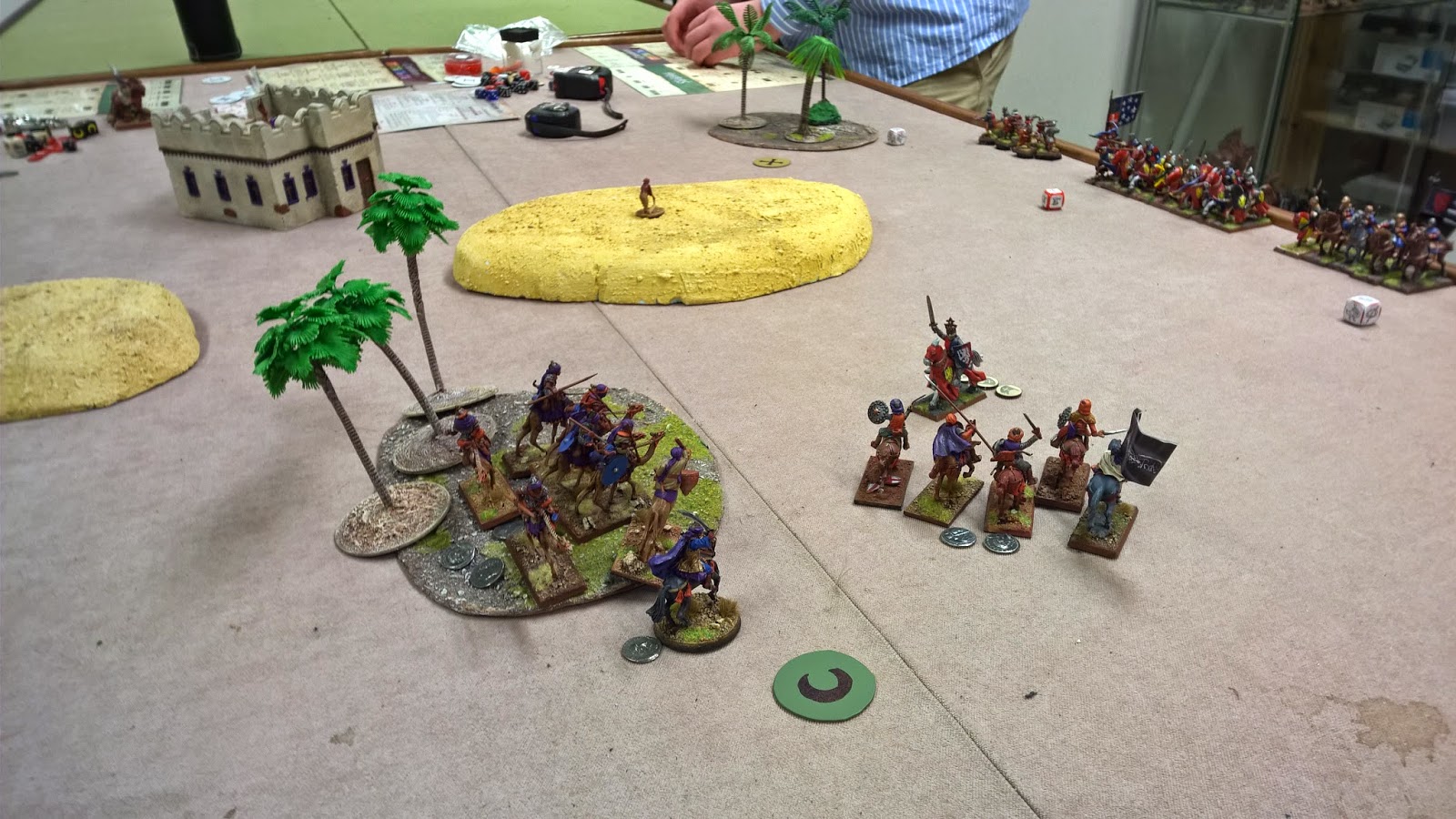 Situation in the beginning of Mikko's 5th round.

Suddenly Mr. Crusader Warlor found himself alone facing the Saracen army (one unit still not revealed!). Badass he is, he of course  roared "CHARGE!"... and this lead him into a fight with Kilim (I guess this was not exactly planned...). Well, he was rather well equipped with 10 attacks (Ascalon) - GULP!
Luckily he was more fatigued than Kilij, who raised his armour and reduced the enemy armour. Mikko of course countered by reducing Kilij's armour back. After a blur of hits from the crusader, 3 hits were scored, one of them was saved and one more Bedouin died, poor bastard! Kilij scored 3 hits with his 5 attacks against the reduced armour of 4. One of them was saved, resilience covered one, but alas the crusader lord was blown from the saddle! Maître Michel “le Malheureux” de Pauvres Chevaliers du Christ et du Temple de Salomon is captured by Kilij Arslan's saracens! 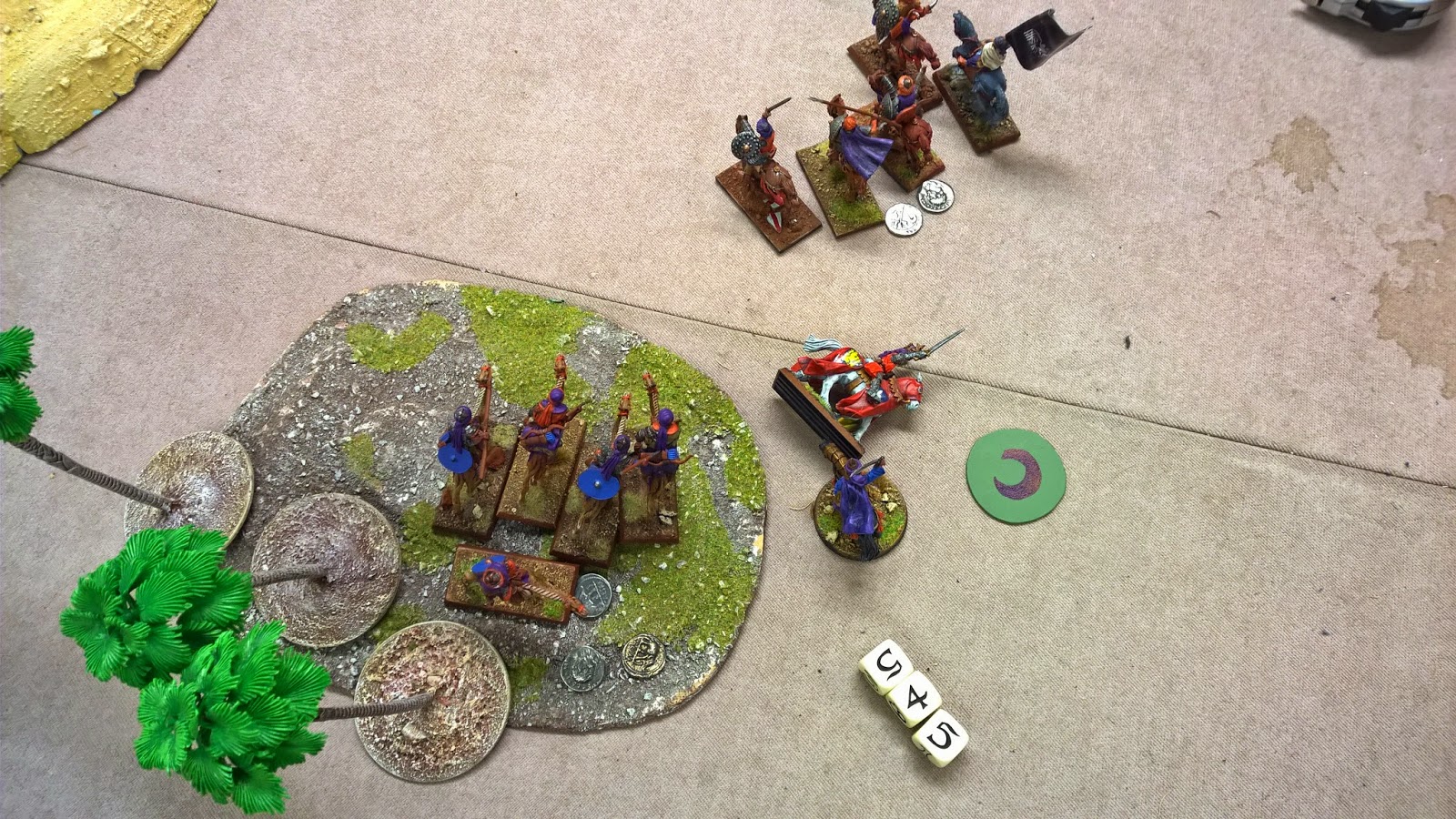 All cavalry warband led by Kilij Arslan worked nicely. Getting the start and the Assault at Dawn -scenario worked very much to my benefit: I grabbed the initiative and managed to strike a telling blow to crusading lines before they could even react. Fast and deadly - even if the first melee with one crusader casualty from 35 attacks was abysmal! Well, I practically won the game in the deployment of terrain and troops.

To Mikko's honor I must say that not for a moment was he dispirited and kept coming even when the odds started to look very grim... thanks for the game Mikko and hope you learn from this, maybe not so gentle after all,  lesson.
Lähettänyt Teemu klo 20.40