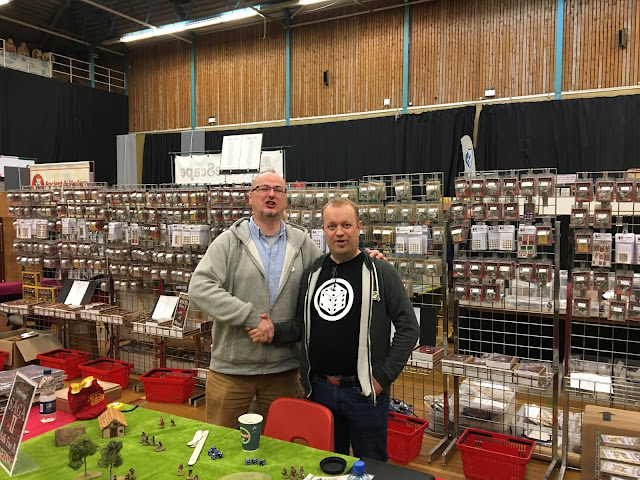 Definitive highlight of the day was to have long chat and a demo about Saga 2.0 with
Grippingbeast's chief Chum Andy. Very interesting changes coming to Saga I must say!
Read on to learn what else happened!

Took a direct AirRail bus from Heathrow and arrived in Reading about eight o'clock.
As my hotel - Hotel George was in the city center I took a quick walk there... 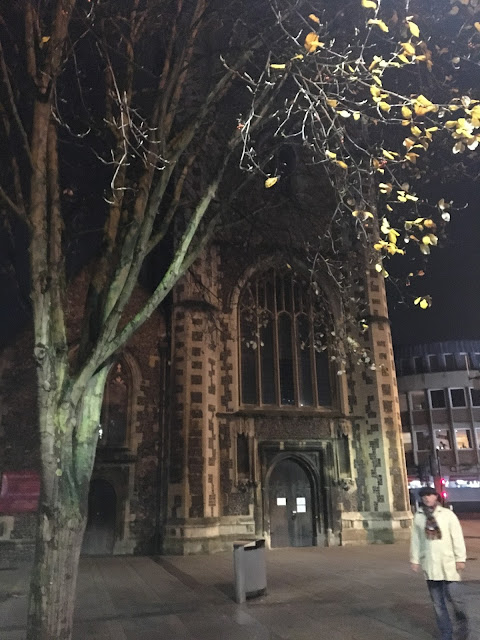 I soon learned, that the oldest part of the building was built in the year 1423! 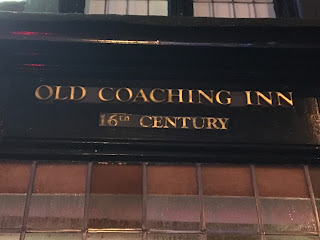 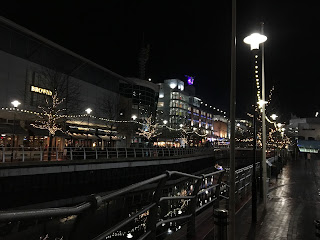 Found a restaurant called "The Real Greek", where they served
Greek dishes in a tapas way. Good food but a bit noisy as the
place was packed. 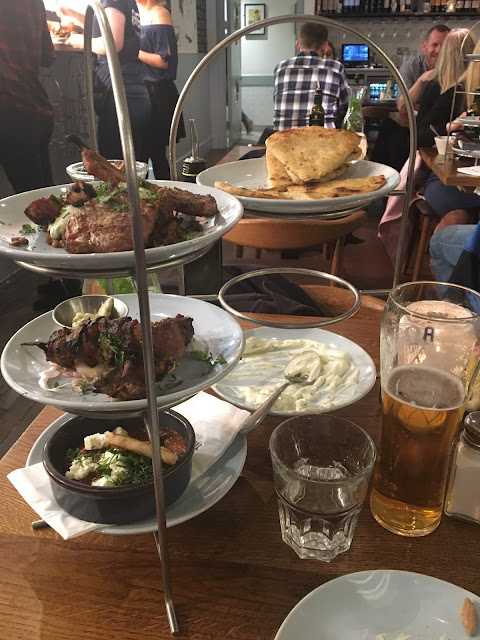 Took a stroll back to the hotel... 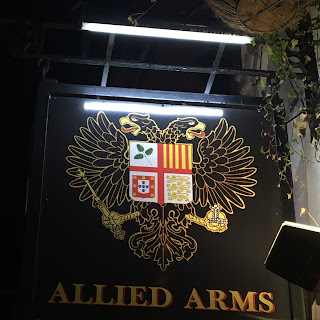 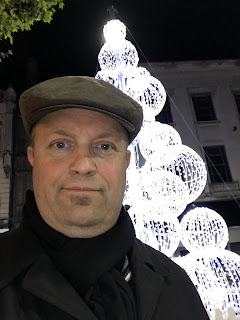 ... where I enjoyed three different board / card games with
British "colleagues", whom were also visiting Warfare and were hosting
a big Gettysburg demo game 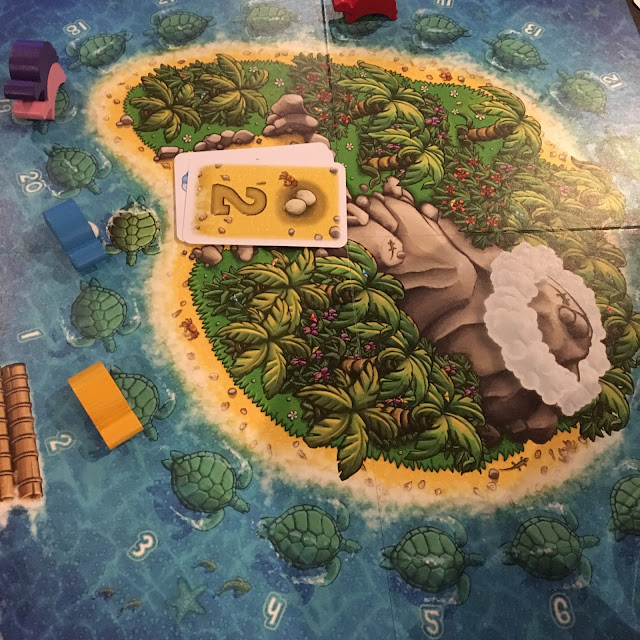 After breakfast I took a walk to the venue: Rivermead Leisure Centre, which is by the Thames river. Took me a bit less than 30 minutes. 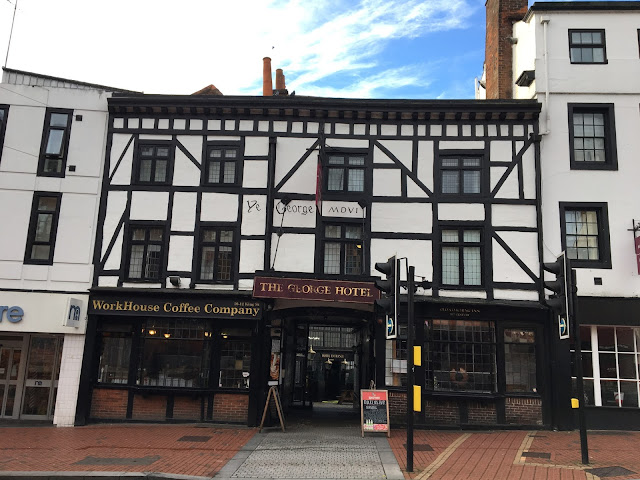 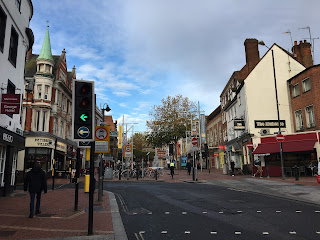 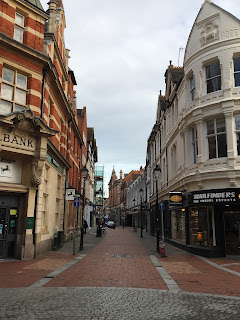 After paying my entry fee I ventured directly to the Bring & Buy -section. It was a big
as promised, but actually had very little to offer to me as I was not interested in painted 10-15mm minis nor in GW stuff. Later in the day I found a box full of New Line Design's Late Romans stil
in their packing, this was great as I'm currently playing that period in our Limes Campaign 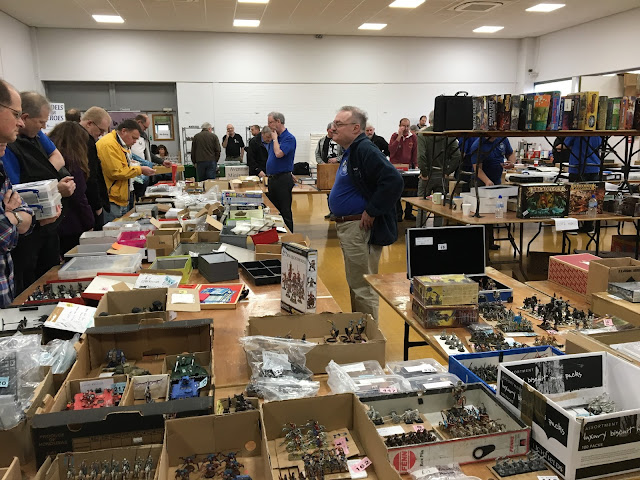 Aventine miniatures was displaying their beautiful miniatures, but weren't
unfortunately selling them in the event. 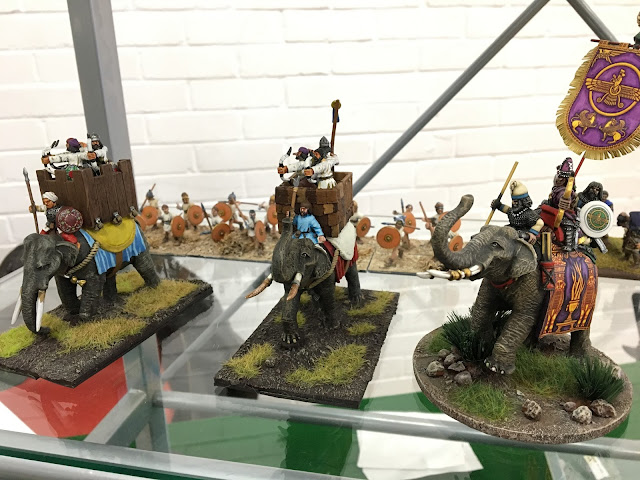 I seem to have a "thing" for war elephants and Aventine's are the best on the market. Resin nowadays. 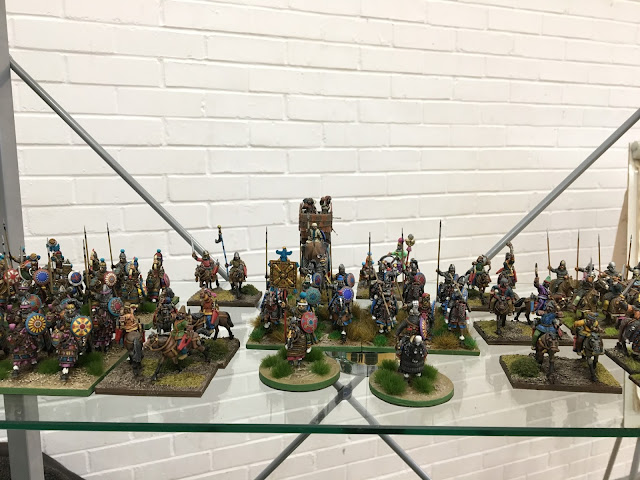 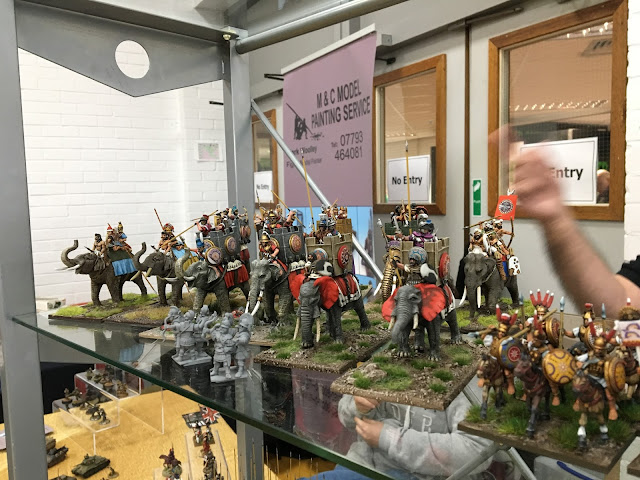 After taking an overview to the traders area (so much beautiful and definitively needed stuff!)... 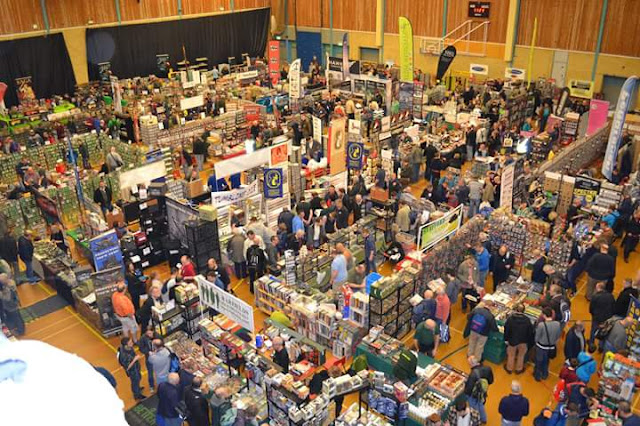 ... I headed to see the Saga Tournaments (specs here ), as I wanted to see the top chums, like Andy Lyon play.

In the first game I got to follow a while (eating my lunch sandwich at the same time) was Irish vs. Vikings. The vikings were played by a not so experienced player and were wiped out. 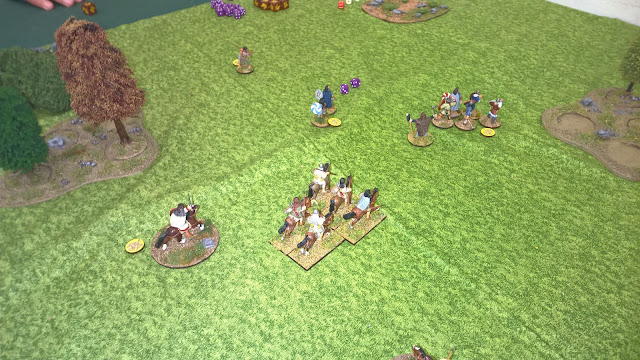 Before the last game of the tournament started I had a very nice chat with
the tournament organizer Rich Keenan (see Invictus History ) - he had actually brought practically
everything to the tournament! He then pointed me to the table, where Andy Lyon would play. 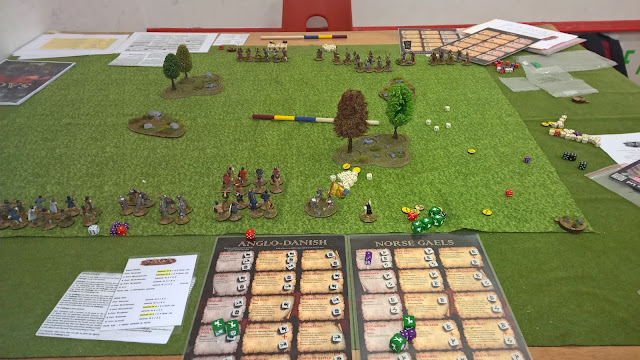 After introductions I was warmly welcomed to watch the game and
soon the forces had lined up: Andy's Anglo-Danes on the left and Robert's Norse Gaels on the right.
Both had 6 points of troops and a priest (each type was available for the gamers in a game). Andy had a War priest (practically 2 warlords!) and Robert had a religious adviser. 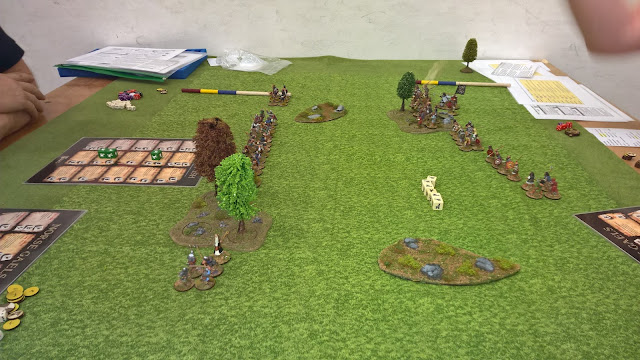 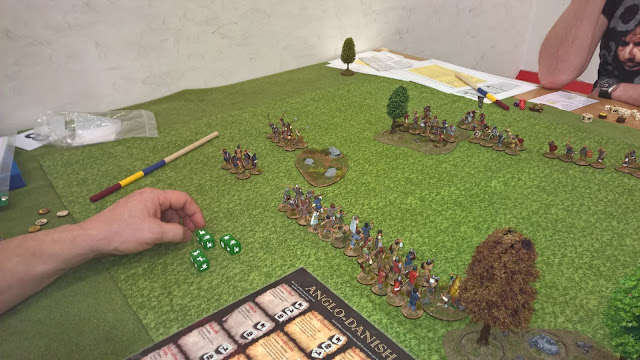 Andy sent 4 HG to counter this threat and also pushed forward in the middle, where both his WL and the WP were able to move units with their "Obey" command. 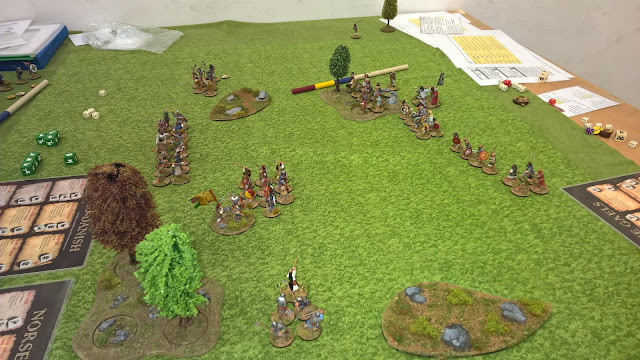 Robert contemplating his tactics. I think he was slightly intimidated by Andy's reputation and the battle board was also new to him. 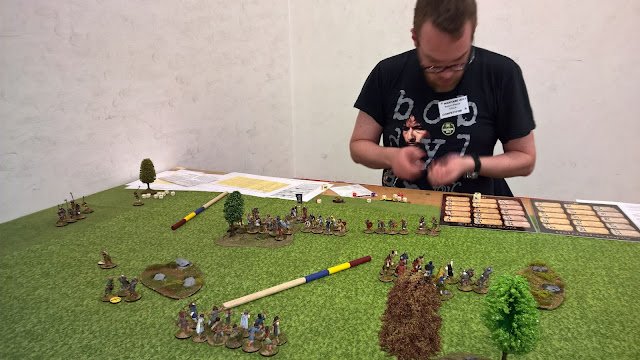 Anglo Dane commanders moved forward with a unit of 10 warriors. Levies from either side had yet to do nothing... 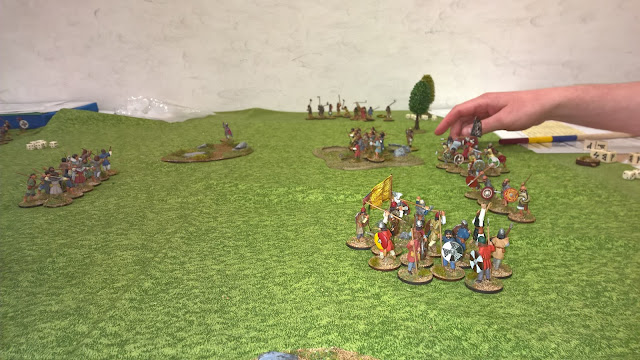 Decisive moments were closing (this is around turn 4) and both players are considering their choices. 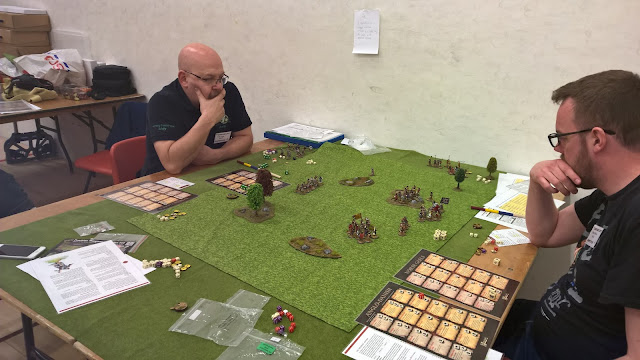 Robert chose a somewhat surprising tactic and "ran away" with his WL. WL's were worth 10 slaughter points in this tournaments (promotes aggressive playing said Rich). 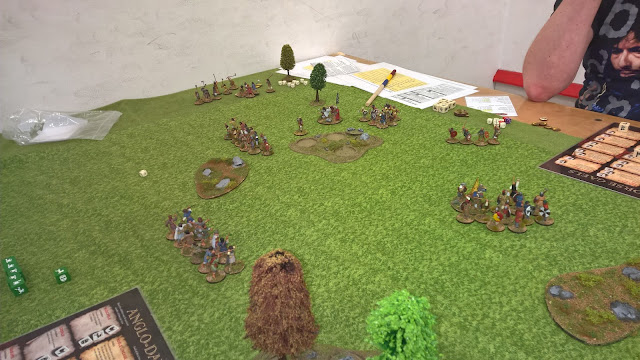 So Andy's forces had a comparably easy job in dispatching the 4 HG left to stand in their way...  it seemed quite typical, that only one action was focused on and it was really boosted by Saga abilities.
Here an interesting combo was played: Andy used his WL to activate the WP, whom took the warriors "with me" and "side by side" to the melee. 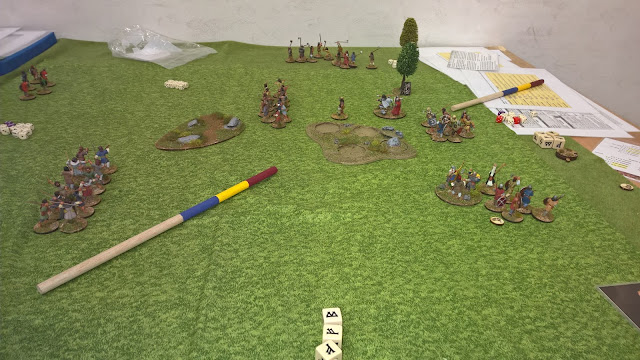 Norse Gael warriors proved to be a harder nut to crack: in the first round of melee they killed all the remaining Anglo Dane warriors by taking fatigue to get auto hits into the enemy. After that they were exhausted and Andy's WL went in again, but bounced! 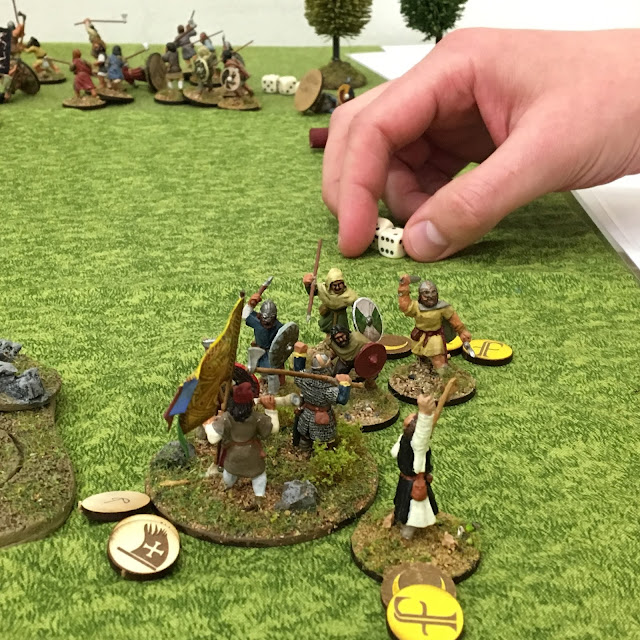 In the last moments of the game Andy's levies finally woke from their slumber and went after the religious adviser, whom had ran to the edge of the battle field with his lord. Javelins flew, but the priest survived! 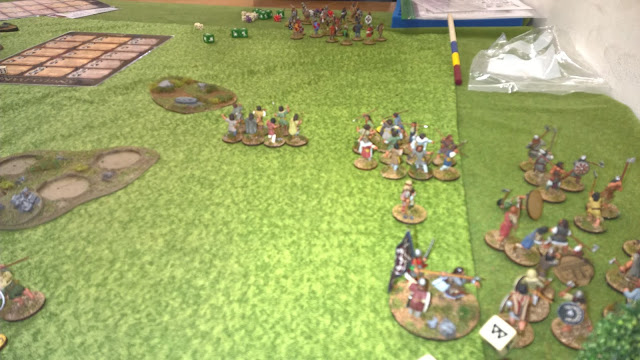 Rest of the day

It was now about three o'clock and the show would end at around four. I had to rush a bit to make my shopping (had promised to bring some goodies to my mates back home as well). Also collected few prizes from GB to the coming Saga-tournament in Finland I'm arranging as part of our club's Winter War -tournament event.

After that was done I ventured to the main hall to see if there was still something to see... but I was late! Games were practically over and the chaps I'd been playing last night with were gone already. That was a bit of a shame - I had had some much to do and watch, that I practically had missed 1/3 of the show. We'll I had such a good time, I can't really complain!

Summary: Reading is a nice town and Warfare is a good show (I've now been to SELWG, Hamburger Tactica and Warfare). Thank you Warfare and all the nice people I had the opportunity to chat with!