And the 5th Game of our Limes Campaign

Our club’s Saga players gathered again for another Saga Games Night, but this time it was a special: first go with Saga 2.0
Last Romans (me) faced Germanic People in 5th year game of our Limes Campaign (Rome currently leading 15-8 vs. Barbarians). Other games were Saracens vs. Normans (playing Crusaders) and Vikings vs. Scots. A full battle report on my game and conclusions on how we all felt about Saga 2.0 follows...

Luckily I had a mighty force of Romans facing the threat:

Germanic people attacked me with:

For this I had taken some unfinished Dark Age cavalry models (Foundry) for further painting,  didn't quite manage to finish them, but now they're in the pipeline. Here are some pictures of them:

When Mikko asked to borrow some DA Cavalry, I knew we would play the killing scenarion, instead of the standard "run through" -scenario.

I had to deploy first, so deployed my power base in the middle, only the ballista and a unit of 4 warriors to guard it ti the right flank, and few units to the left flank. Hounds (mercenaries) were left in reserve to respond to any deployment tricks the barbarians might try to pull...

Mikko deployed heavily to his right flank, but did deploy 2 unist - including one of the HG units to face my ballista in the extreme left. This was very surprising, because there were very little slaughtering points there to gain and he risked loosing men to my ballista. At least he screened his cavalry wisely with warriors.

My plan was to quickly move to the central forest with my archers in the middle - to be both protected from cavalry charges OR to lure cavalry or other chargers into the woods with "Protect" -ability. 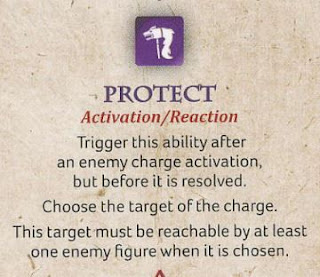 Start of the battle

So I got to start and I let looseissa with my shooting; ballista churned out to bursts of bolts, archers in the right took positions behind the difficult terrain (traps) and my monted HG made a hit and run attack with their composite bows. Several barbarians fell, but maybe not enough... I also DIDN’T move any units to the forest, as I had planned... 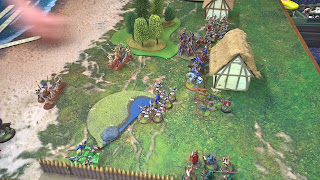 End of first Roman turn on both flanks

Besides the ”Protect” ability, I also left this for Mikko’s turn... 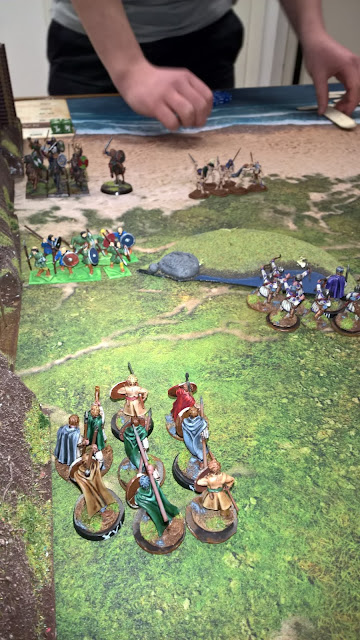 These barbarians were steered away from my HG with “Protect” and they got to taste some “Strategos” too!

After another charge to my archers (Barbarians clearly hated them!) the cavalry surged forward - facing my levies... oh dear!

My levies survived a charge from the enemy WL and on my turn hounds arrived to charge and fatigue the enemy HG. My WL attacked enemy warriors, boosted with extra attacks from “Strategos”, and sought to avenge the archers, but few enemies were left alive... a Saga dice at least was denied! 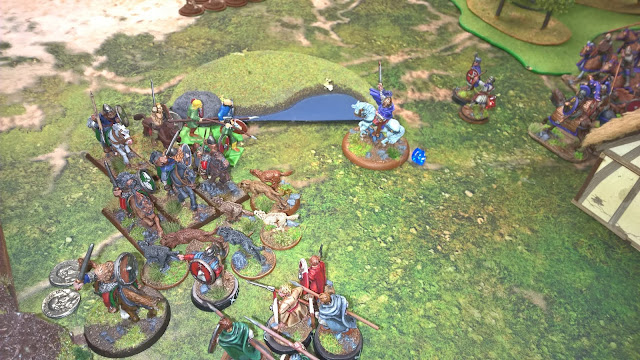 My HG charged into the enemy HG, whom now had couple of fatigues, thanks to my hounds, and slew several of them, only two remained now! The Germanic army seemed to be in tatters now and  their Warlord practically stranded... 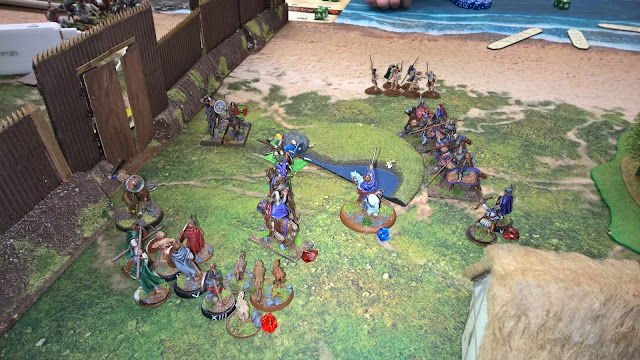 In the middle of the battlefield I had to pay dearly for the fact, that I had not moved my archers to the woods, as the other Germanic HG cavalry unit charged them and slew most of them! Here my Strategos proved very useful as I was also able to take out 5/6 of them HG's! Huzzah for the humble archer! 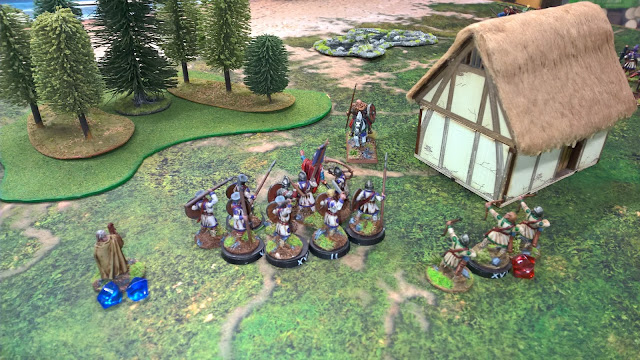 My extreme right flank stayed very passive after the first round... 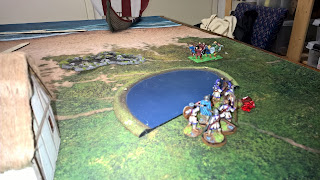 My 5 HG had moved to pepper the enemy HG with some arrows and were feeling confident as my Romans were clearly outnumbering the enemy... 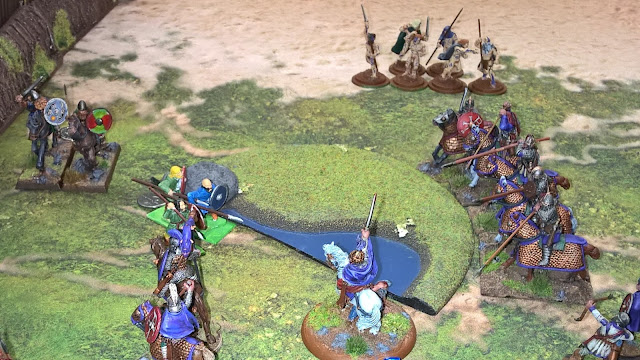 To my shock mere 6 barbarian warriors slaughtered them all without losing a single men themselves!!!

So suddenly what had looked like a certain victory looked almost grim now! I had to sacrifice my poor doggies to save my exhausted Warlord from being charged by the Barbarian WL. My warrior unit in the middle had dispatched the lone HG, but they were now too far to help in the decisive moments of the battle! 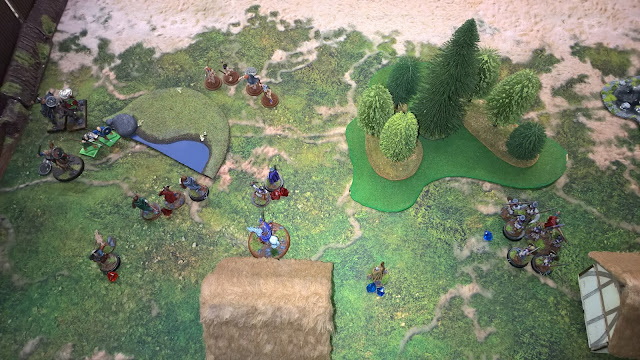 Saga dice on both sides had dwindled rapidly in this massacre. I still had 4 to use (generated 9 in the beginning of the game). Sacrifice of my dogs wasn't going to be for nothing! I rested my warlord and charged the Barbarian one with 2 fatigues (or was he even exhausetd). This and the benefit of extra attacks from Strategos  gave me the edge to finish him off! I lovered his armour to 4 and raised mine to 6... not a fair fight, but desperate times demand desperate actions!

My heroic warlord them proceeded to finish off the one final enemy HG and remnants of a warrior unit. Epic deeds indeed!

My warriors in the meanwhile decimated the other barbarian warriors and the left flank was now totally cleared of enemies. On the right flank my ballista shot again after 3 rounds of doing nothing and took out few more barbarian warriors. With this last insult the battle was over.. 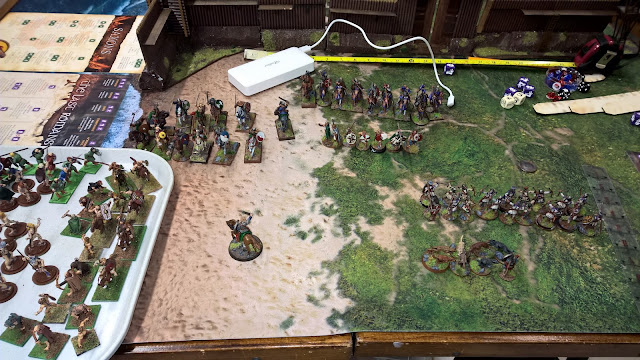