Old gaming friend Jussi contacted me and suggested a game WFB I was happy to oblige.  As it was going to be a totally friendly game, I chose to dust of old Tomb Kings I hadn't used for ages. I also continued painting these Ushabti with great bows, they had seen a field of battle only once before (I guess I wasn't pleased with their performance back then) and I had left them unfinished. I had caught a cold or flue over the weekend, but didn't want to cancel so the game was on!

Read on to find out if we still remembered how to  play this classic ;-)

As I had read the spells of TKs, it was pretty obvious I needed to have a pretty tight deployment; several augment spells had  a range of 12". I had most of my shooters in the left, my Liche Priest in the middle protected by a block of elite Tomb Guard, Casket and Skull thrower in a middle too (facing Empire's largest unit, that Jussi was kind to reveal too early) and finally large unit of chariots with my Prince on the right.

That steamtank was going to be problematic...

I won the roll off for who goes first and moved my chariots in to position, where they could charge from in the next round... 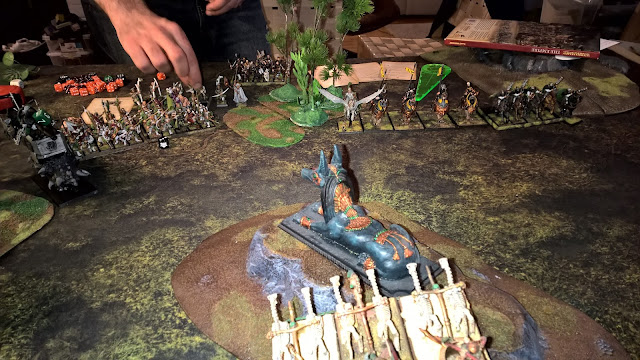 On my left flank I moved my shooters to reach the great cannon with Ushabti and Crossbowmen with my archers. Shot from my skull thrower scattered and hit the Empire Militia as well, they decided to flee. My Ushabti gained multiple shots from magic and took out one cannon crewman. 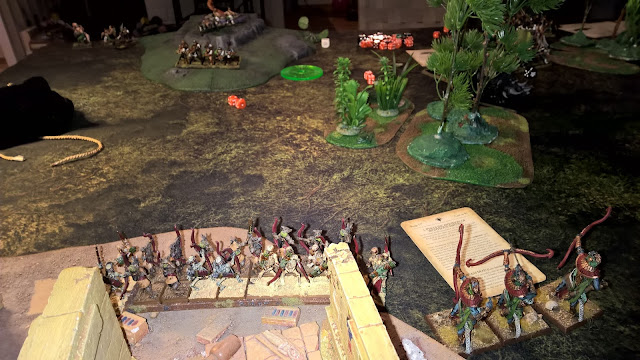 Positions in the end of my first round

Empire's left flank forces dashed rapidly forward in a flanking move. A shot from Steam Tank cannon destroyed my Prince's chariot - this really pissed him off. Empire Spearman horde legged 1" forward as I had reduced their movement to 1". 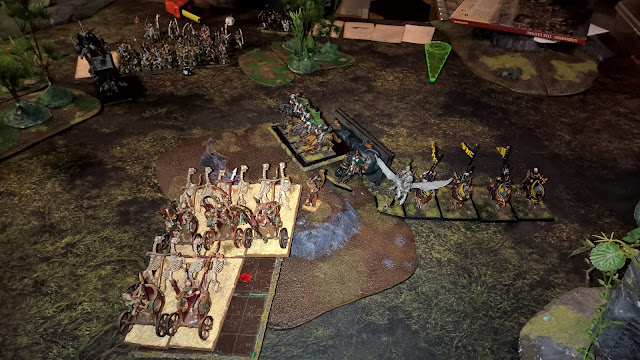 On my second round my enraged prince charged the Empire outriders, whom appropriately fled, he then redirected his rage towards the Empire Captain on Pegasus accompanied with Chocopops. To my surprise Jussi chose a flee reaction as well. He then proceeded to roll very low for his fleeing distance and my Prince caught up and slaughtered them! One mustn't make an arrogant Tomb Prince loose his favorite chariot!

My other charge sent my chariots racing towards the Empire Steamtank! Somewhat crazy you say, but I needed to stop it from advancing towards my hierophant and other assets! I rolled 8 impact hits (pretty badly) and had managed  to heal my unit back to two ranks, so I had strength 5 against T6 of the Tank. No wounds were caused (or Jussi saved them), damn. I followed with a blurry of blows from my charioteers' spears and I think I managed a 1 wound. Well, at least we'd be here for a while. 5+ ward save cast on my chariots would help as well.

My Necropolis Knights also surfaced to the enemy flank 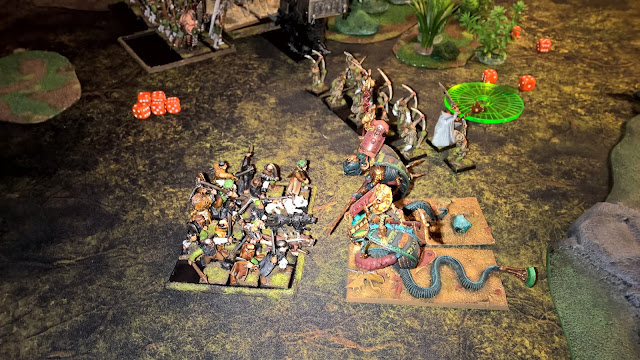 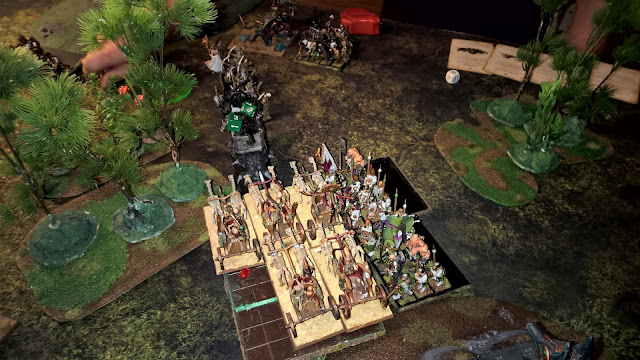 ...and soon they were no more 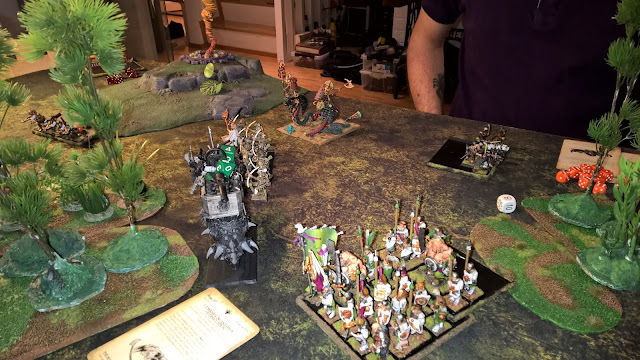 In the enemy rear my Knights had wreaked havoc and were now going after the enemy Life-Wizard, whom was annoyingly raising back up fallen men of Empire - this kind of dark sorcery is our business! 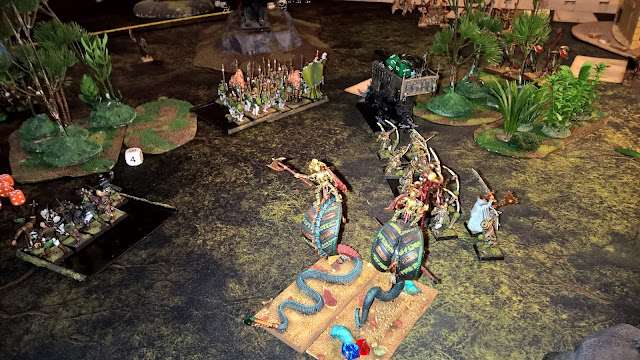 Ushabti moved into the woods to target the steam tank 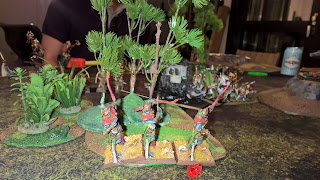 Enemy forces had now broken through and my units made some avoiding moves. Luckily the game was drawing to it's closing... 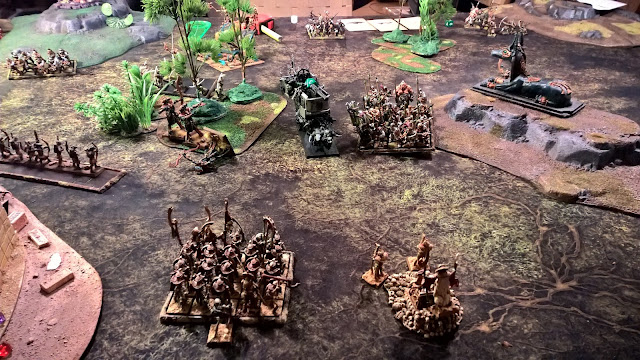 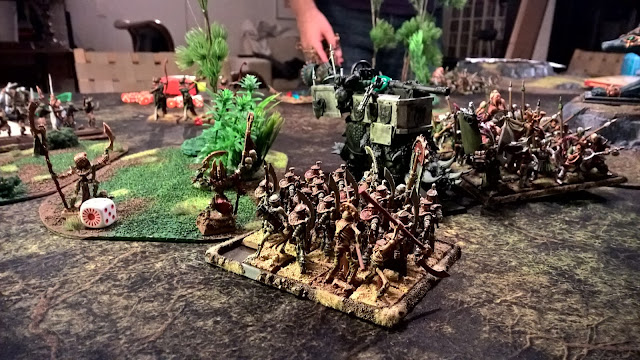 My archers and Ushabti made short work of the Empire skirmishers and my archers overrun to the High Wizard, but it was too late, as it was my last turn. 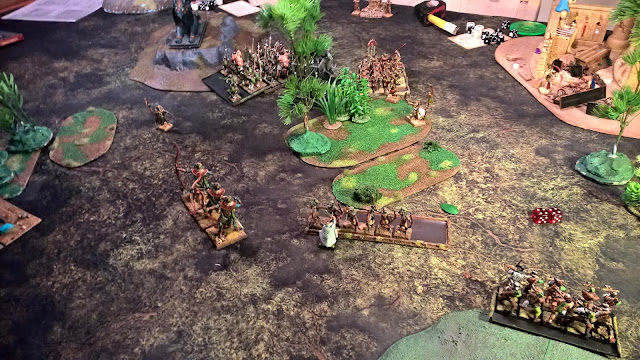 My Knights had a dejavu on fighting the militia, healed to full strength. Once again they were routed, but they evaded from my grasp! Game ended in a draw as both sides had lost just one standard. I think I had caused more damage in points, but that wasn't relevant in this scenario.

At least I was bit by the fantasy bug again and we scheduled another game for April. By then I will certainly finish these beautiful Ushabtis!