ASOIAFTMG: Blackfish vs. The High Sparrow

Are them bloody Lannisters invincible?

So far I have played 7 games against Lannisters with my Stark and lost every single one of them! I have watched a lot of ASOIAF battle reports in YouTube and I’ve been honing a 50p. list to be better and better... This was to be the third evolution and the third game with that list. Read on to learn, if Lannisters can be won? 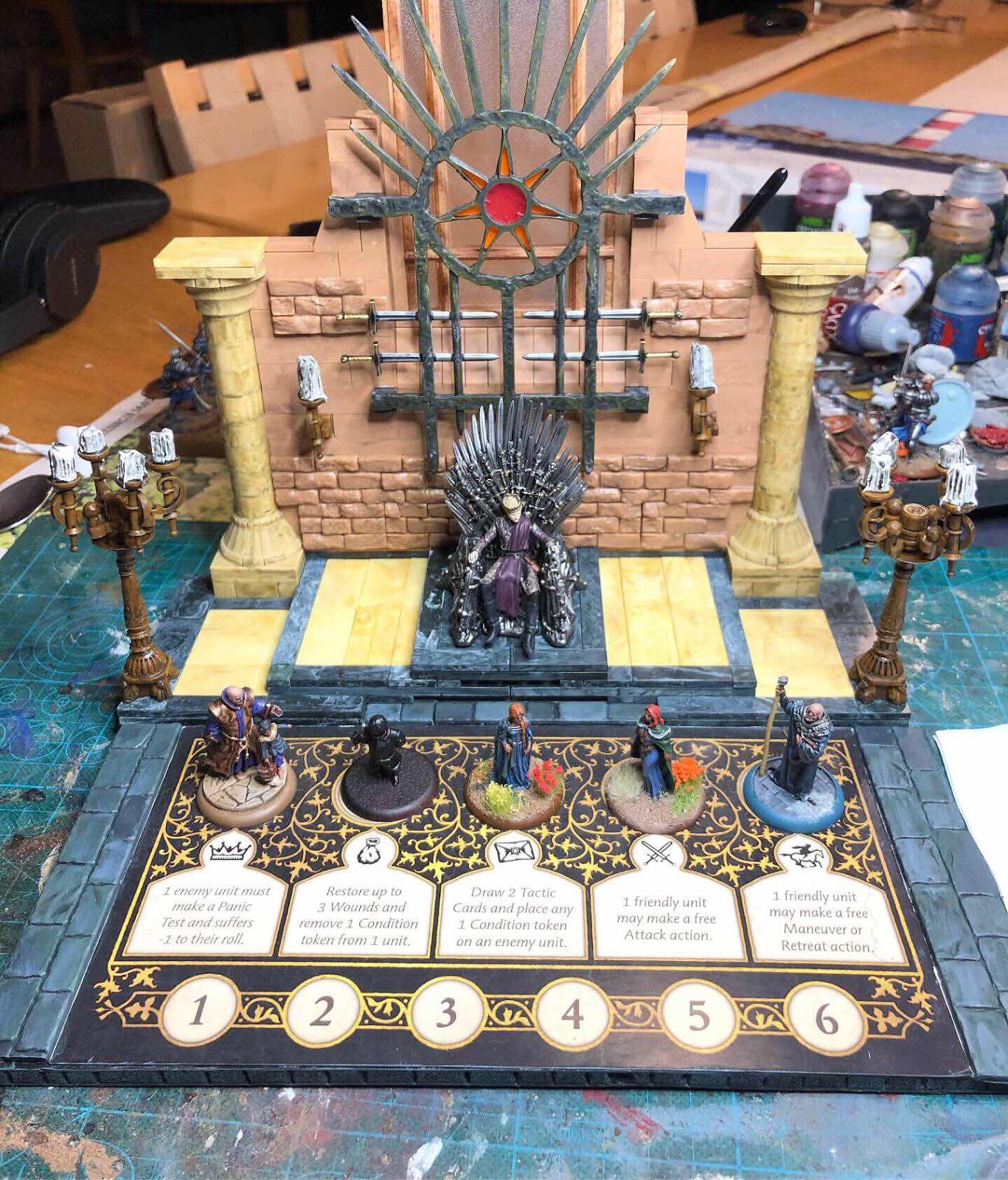 Setting I built for the Tactics board

Preparations: stuff that I painted for the game 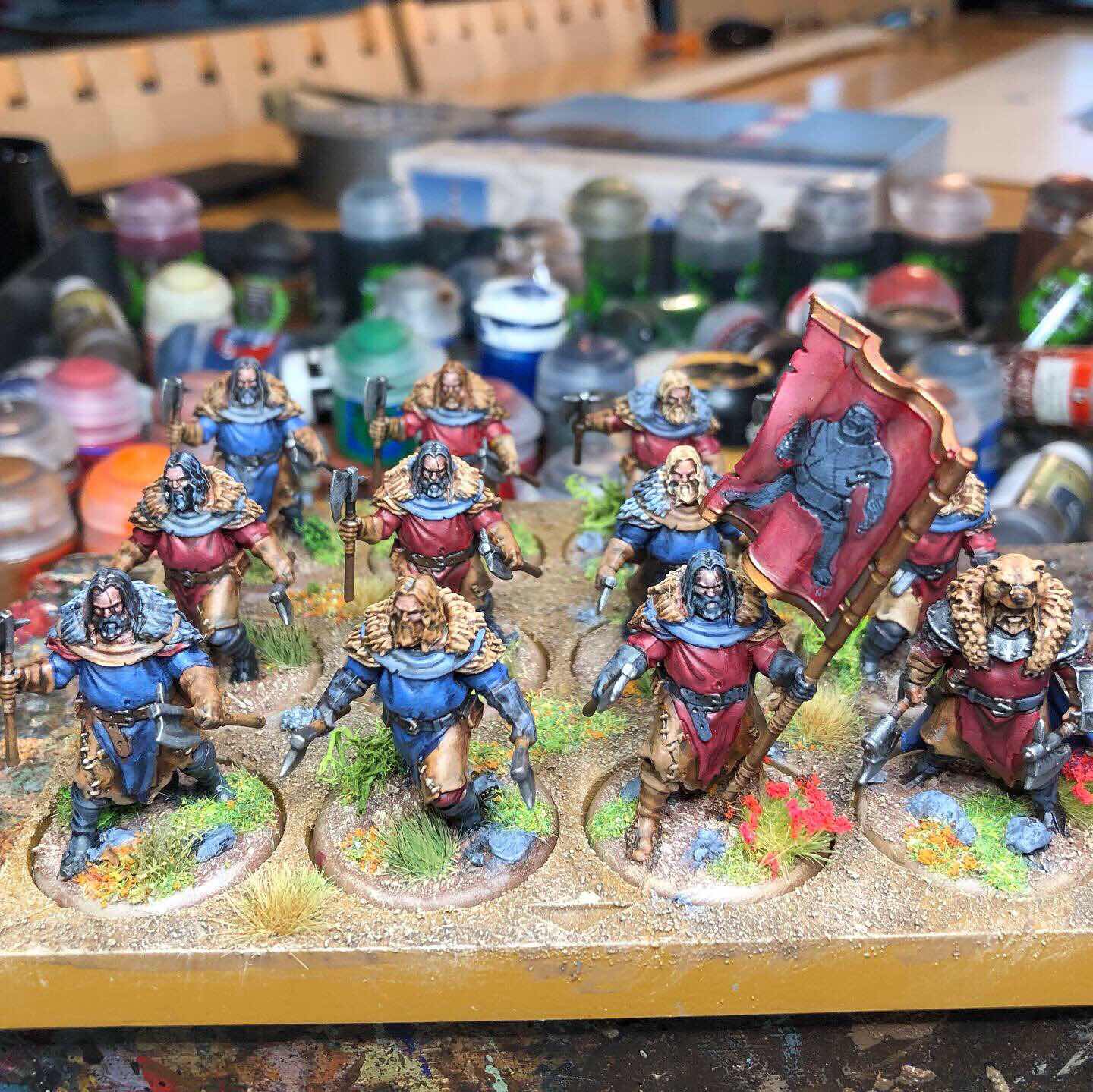 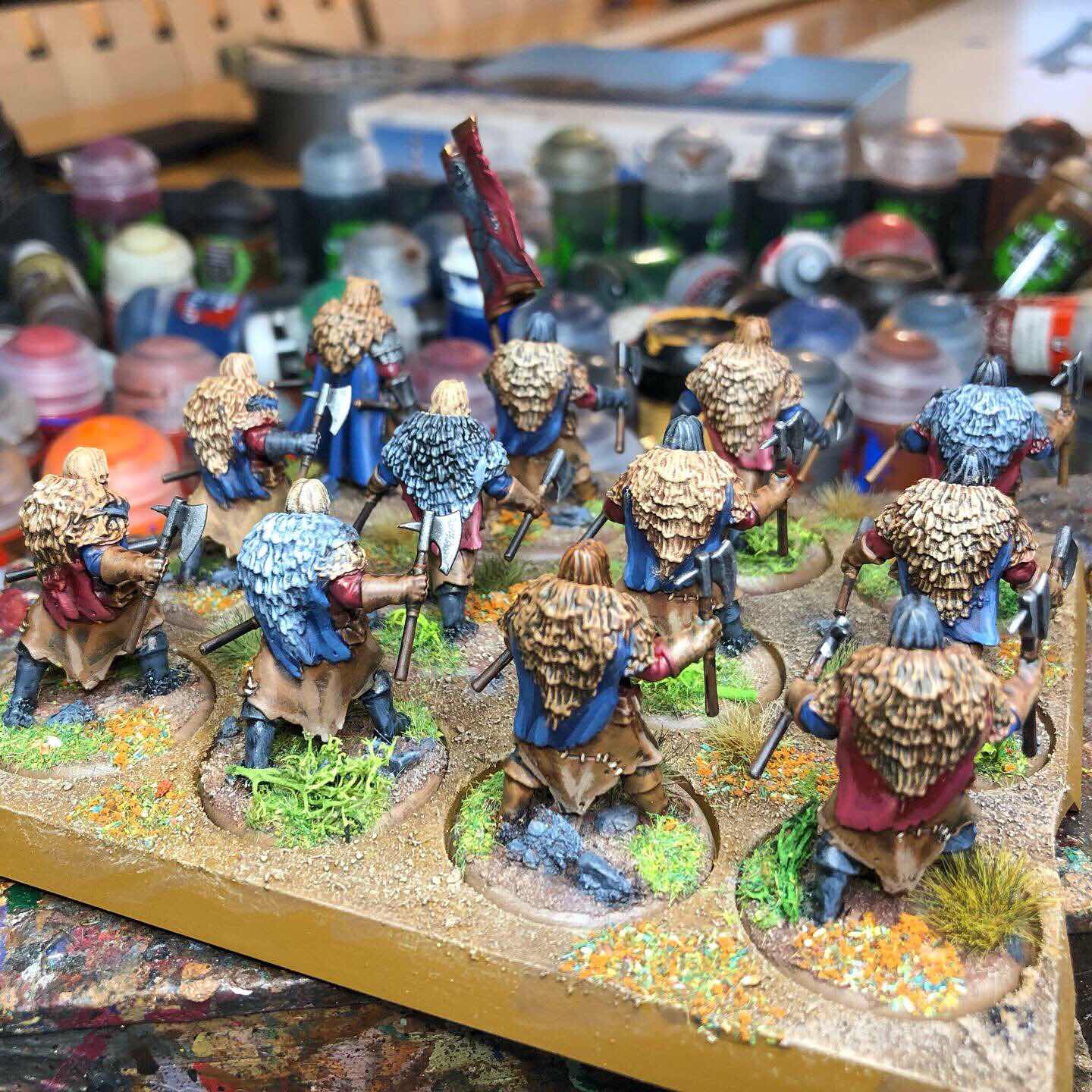 Berserkers are fine with their morale of 4, but Tully Sworn Shields


needed Brienne to boost their morale with +2. 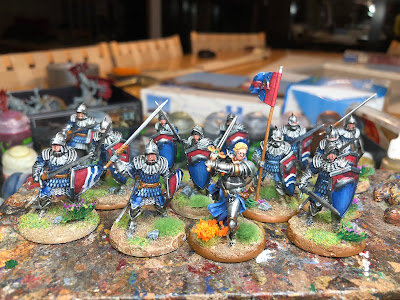 Maiden from the Emerald islands 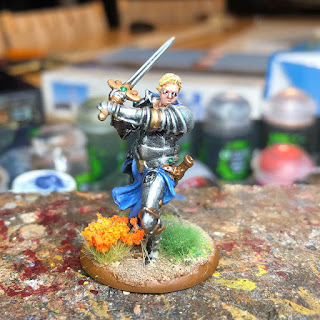 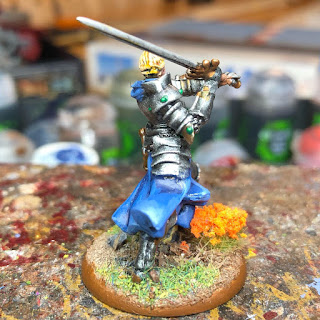 Small shots of port were served, before this grudge match was allowed to start.
(Mikko finished his immediately) 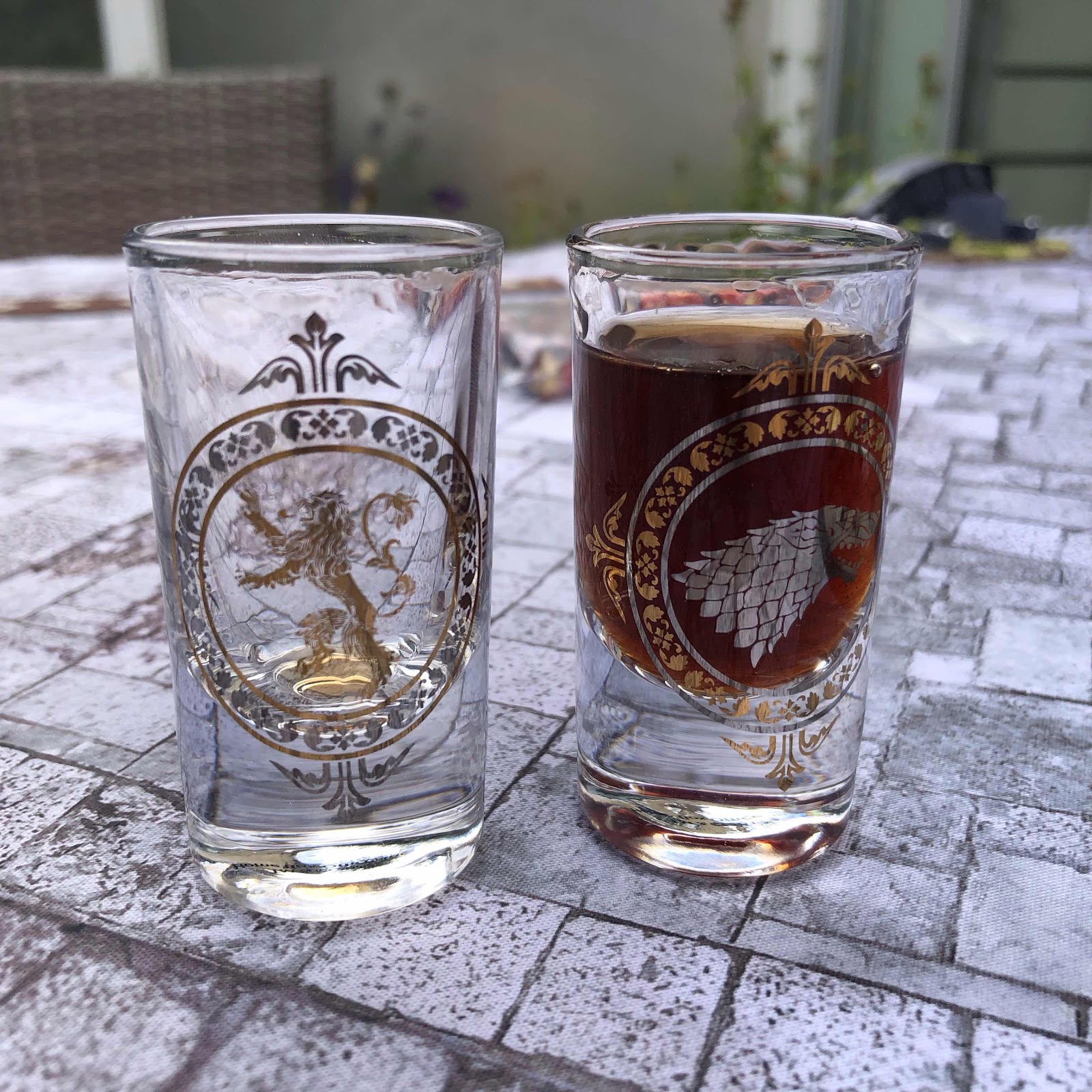 We fight for the objectives and kill points. Central objective is worth 2 points. Only two units start at the field (deployed in corners). Destroyed units are recycled. 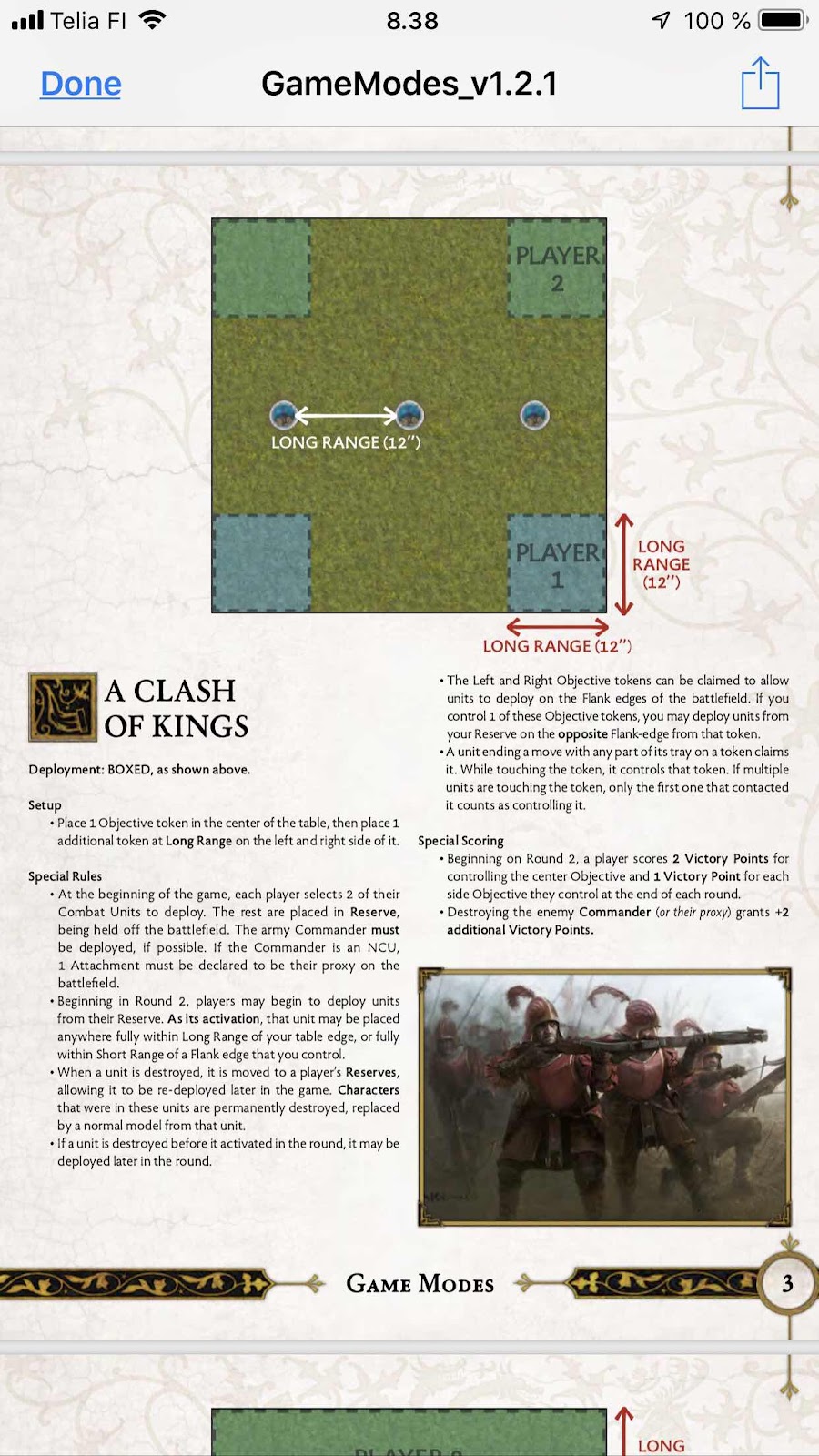 My army is all about high morale / morale boosted (Brynden and Brienne both give +2) and quite hard hitting units (Umber Great axes and 2 X berserkers). One unit of archers (to shoot non-Lannister supremacy units) and 2 dogs from Robb and Bran. No cavalry. No actual Stark Swordsmen. Varys and Arya (first time) as NCUs. Varys to further negate crown zapping and Arya for the element of surprise (and she is cheaper than his mom) 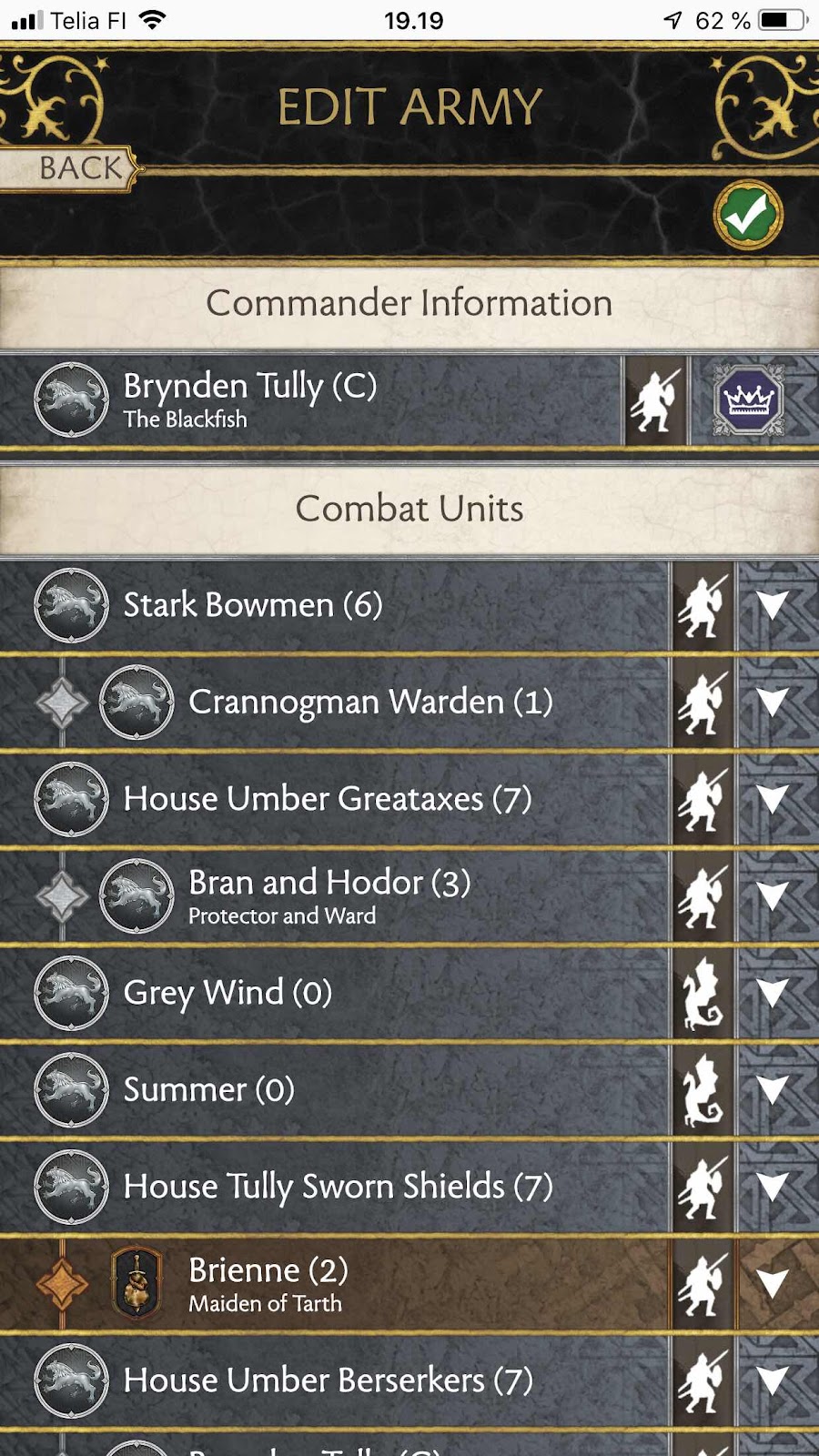 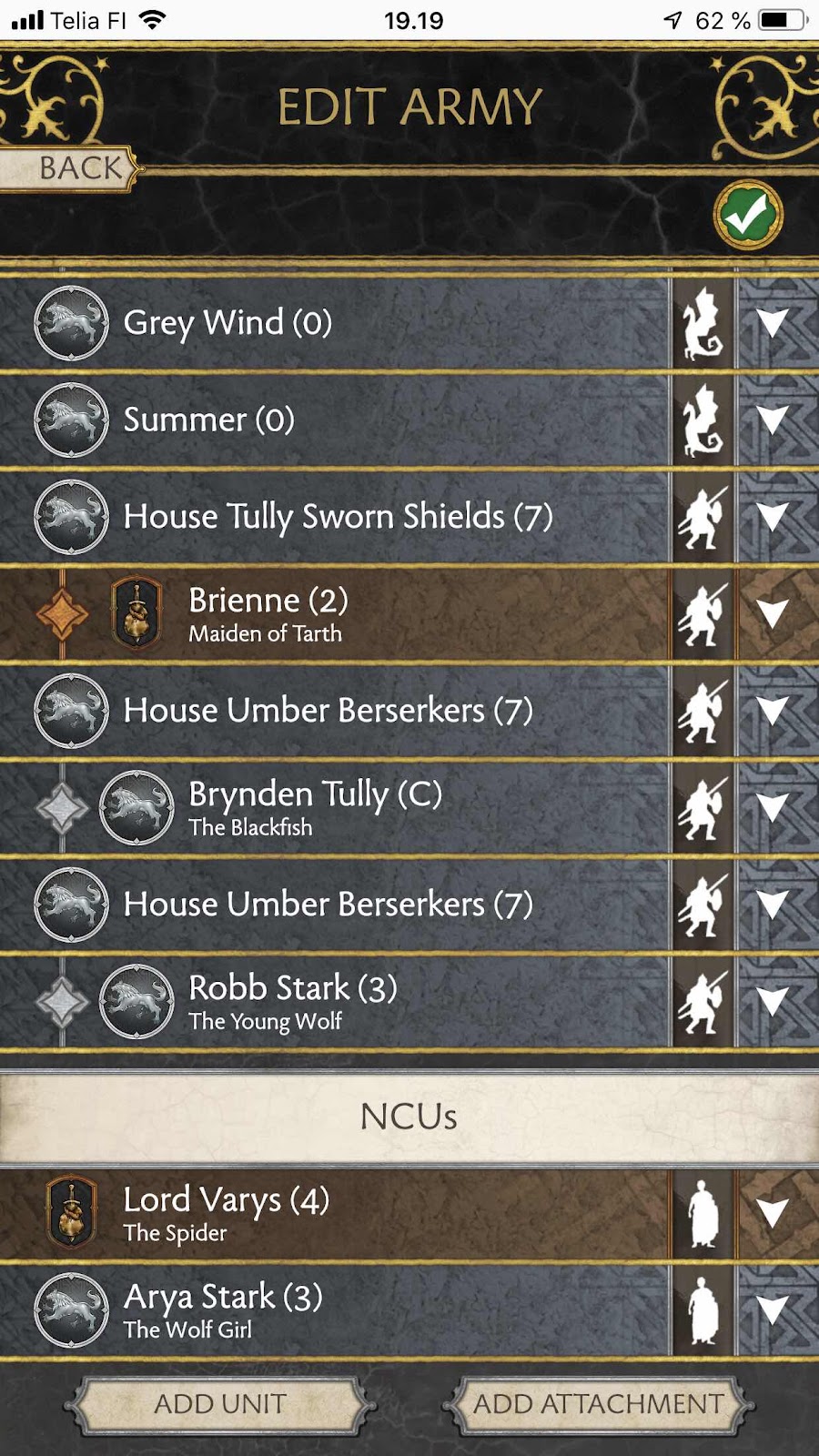 In this scenario one only deploys only two units, one in each corner of your table end and the army commander needs to be in a unit deployed. In my left flank Blackfish himself with Berserkers faced a unit of Lannister guards lead by The Hound - Sandor Clegane. 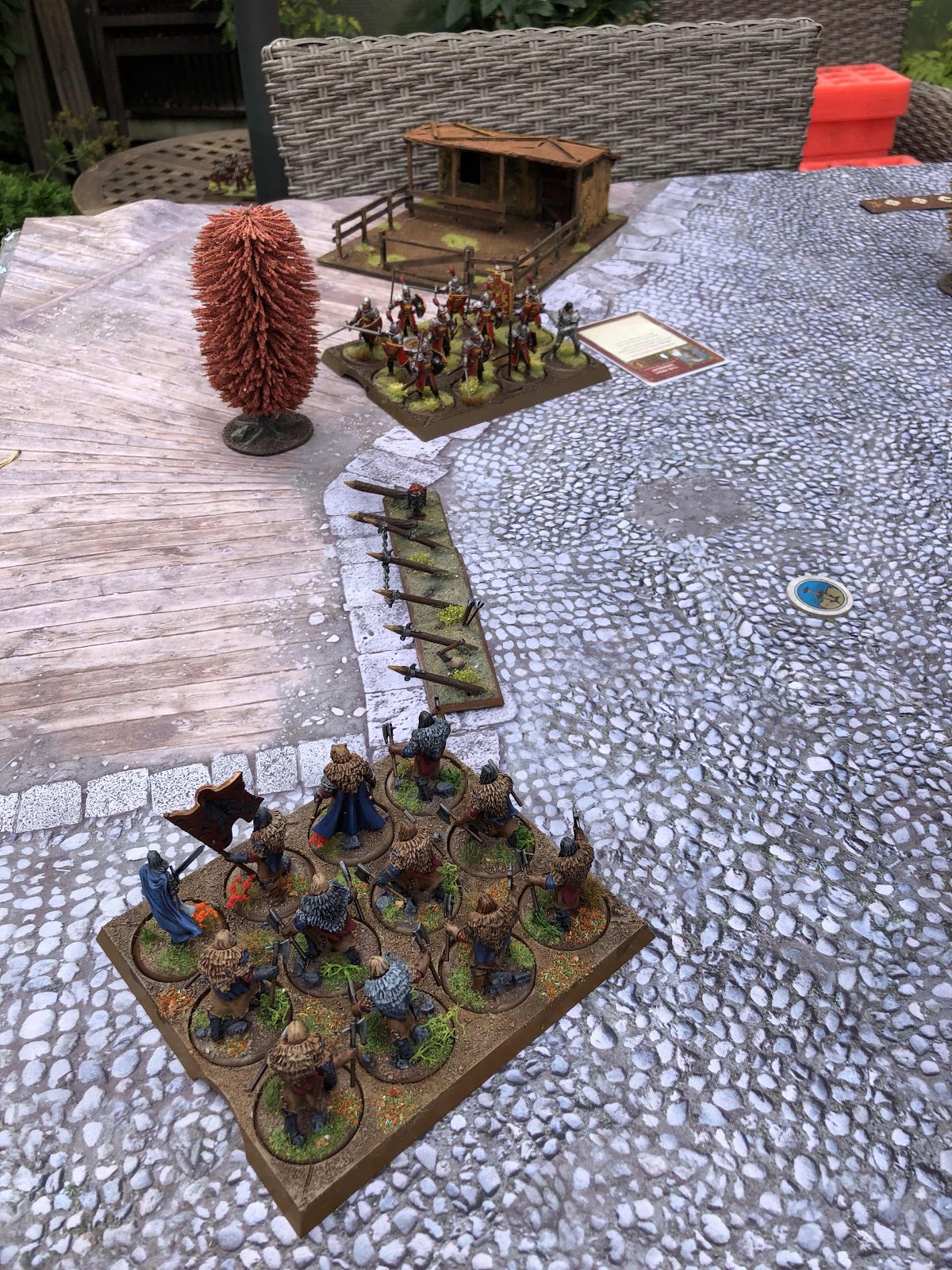 In my right flank a unit of Stark Archers faced a unit of Warrior Sons with a Champion of Faith, acting as the commander as High Sparrow is a NCU. Mikko started the game and Crown zapped my archers, luckily they only lost 2 men. 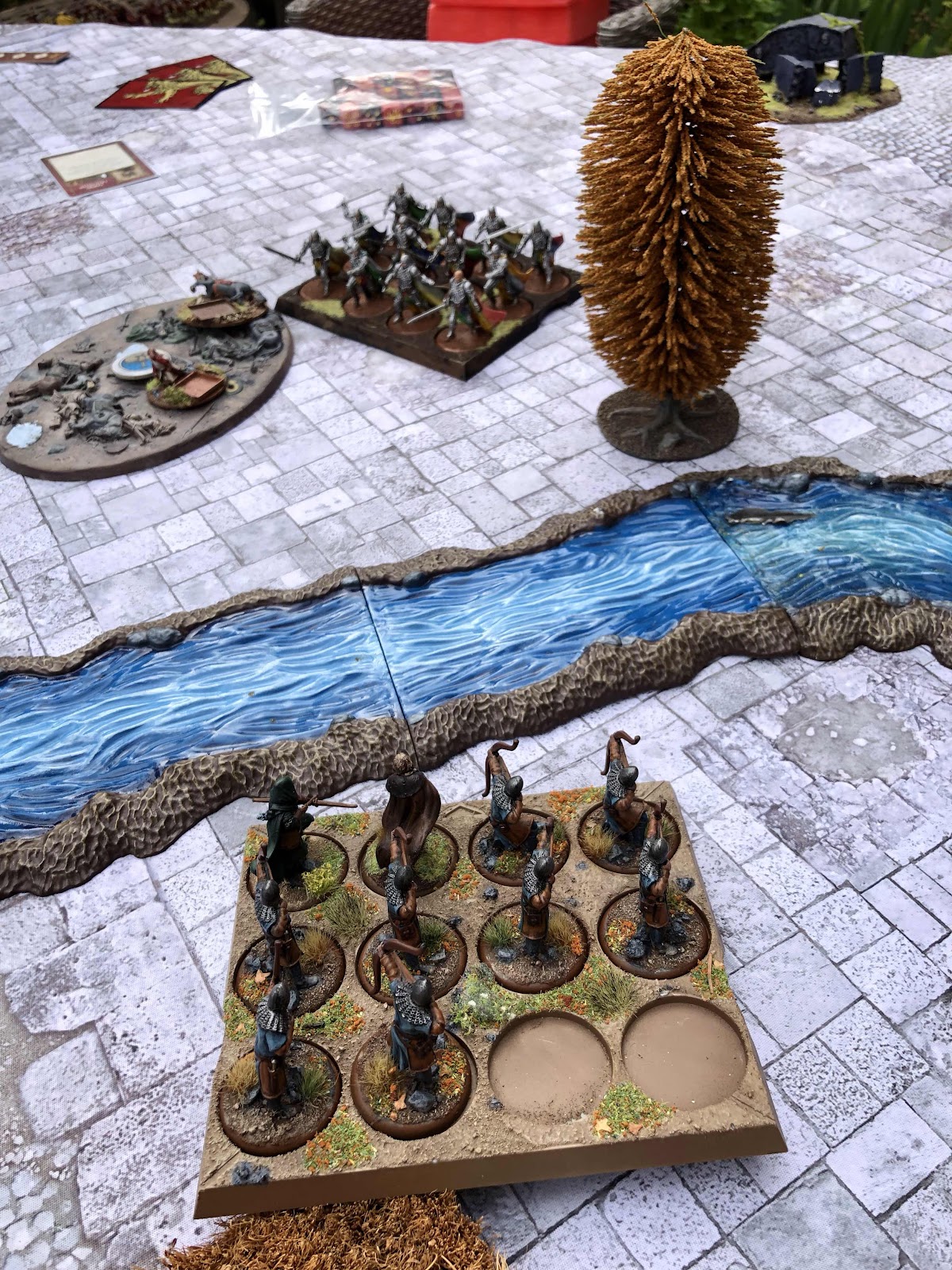 My army really is quite aggressive and so as I was the first player, I played Arya starks "Never do what they expect" and free manoeuvred Blackfish and his Berserkers to the flank ark of the Lannister Guards. As one might expect, my first actual activation was a flank charge by them... 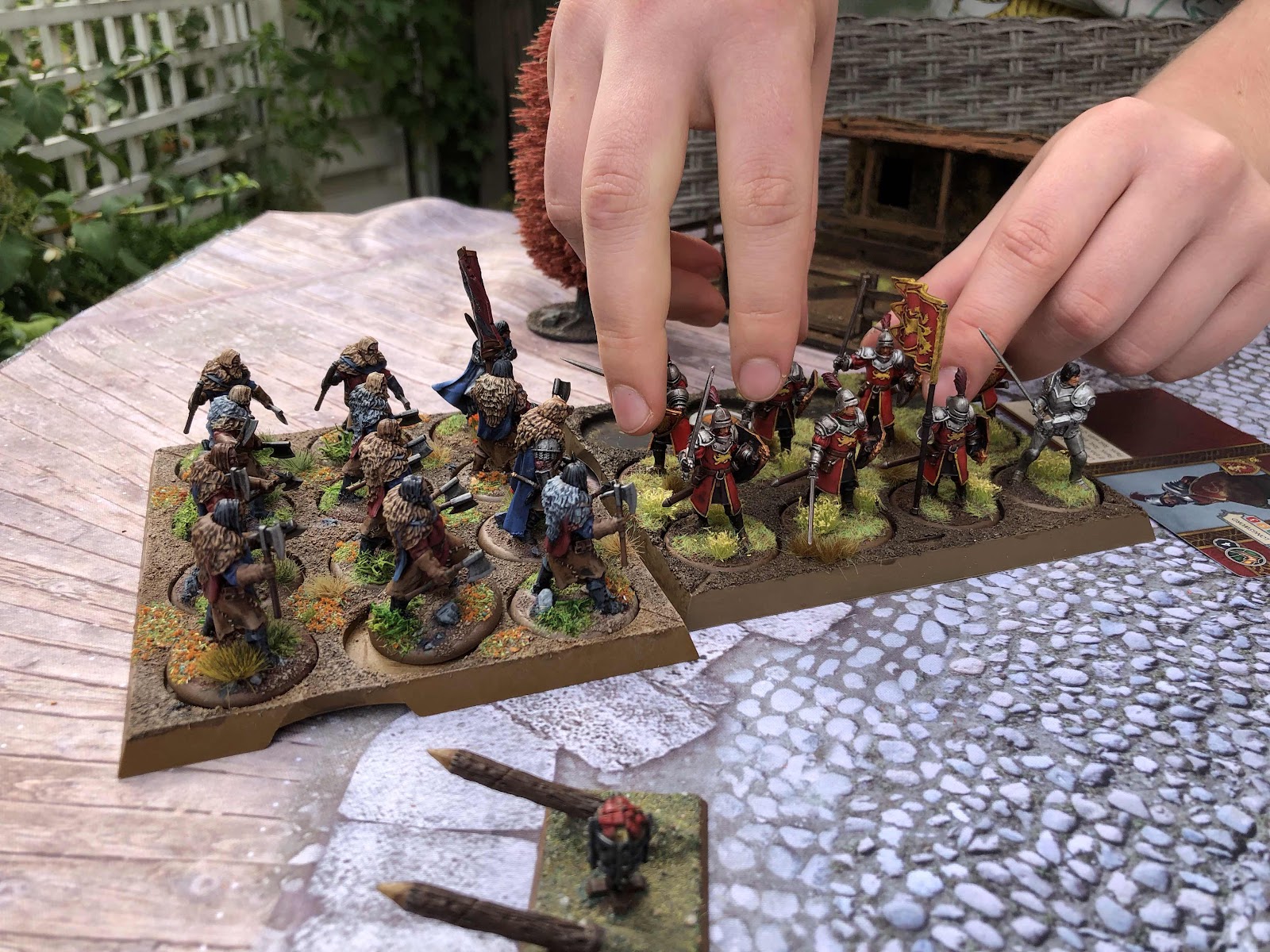 This flurry of blows with -2 to saves (flank and sundering) and the following panic test left the guards with just two models standing. Mikko was sure to take Crossed swords on the Tactical board next - to deny them from me! 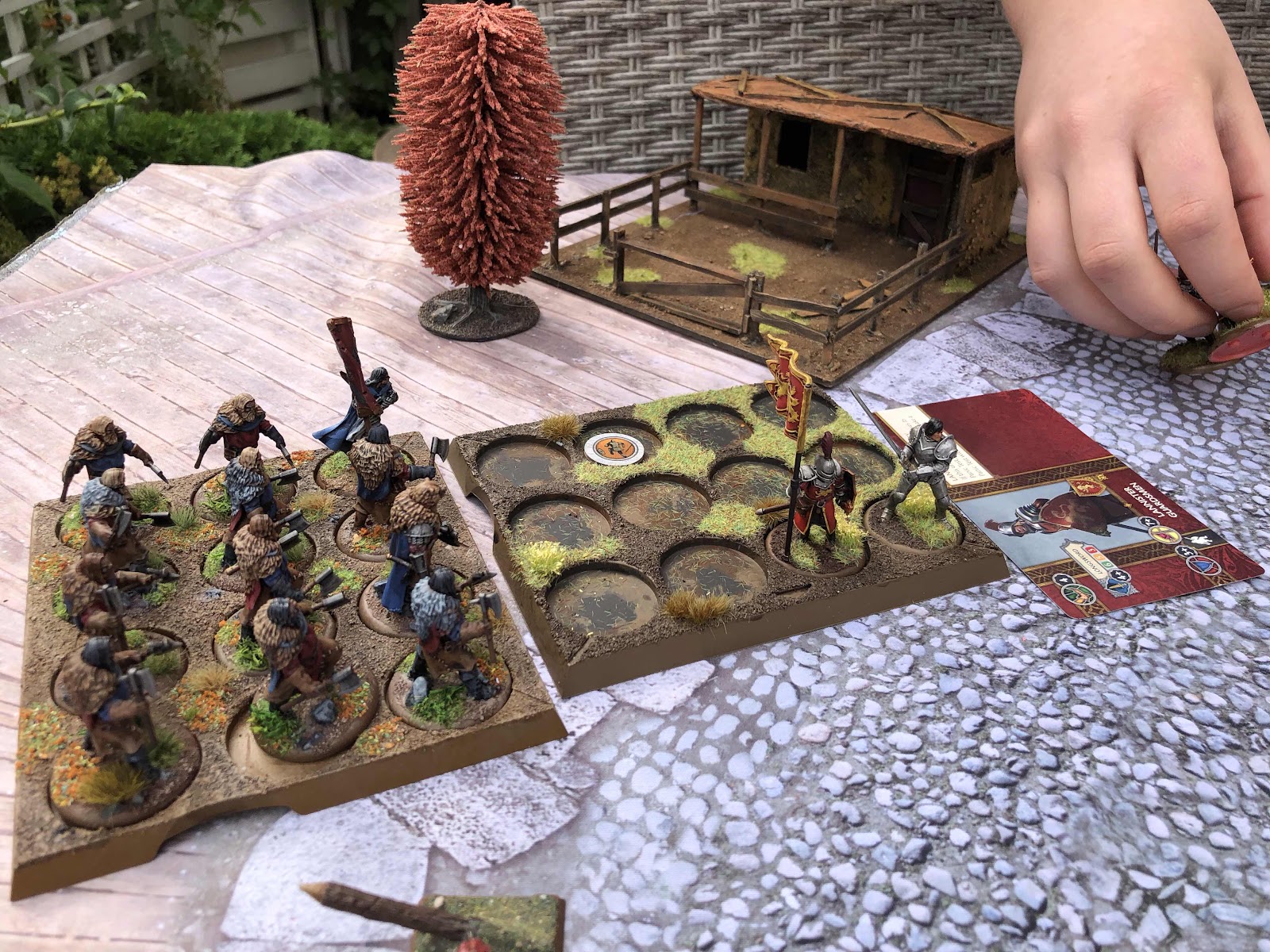 On my right flank slaughter from my bowmen was equally devastating- Crannog Warden allowed me to reroll misses from my 10 attacks as Warrior sons had not activated yet. They must have been Vulnerable as I seem to have taken out 9 models (maybe they lost few on the panic test) 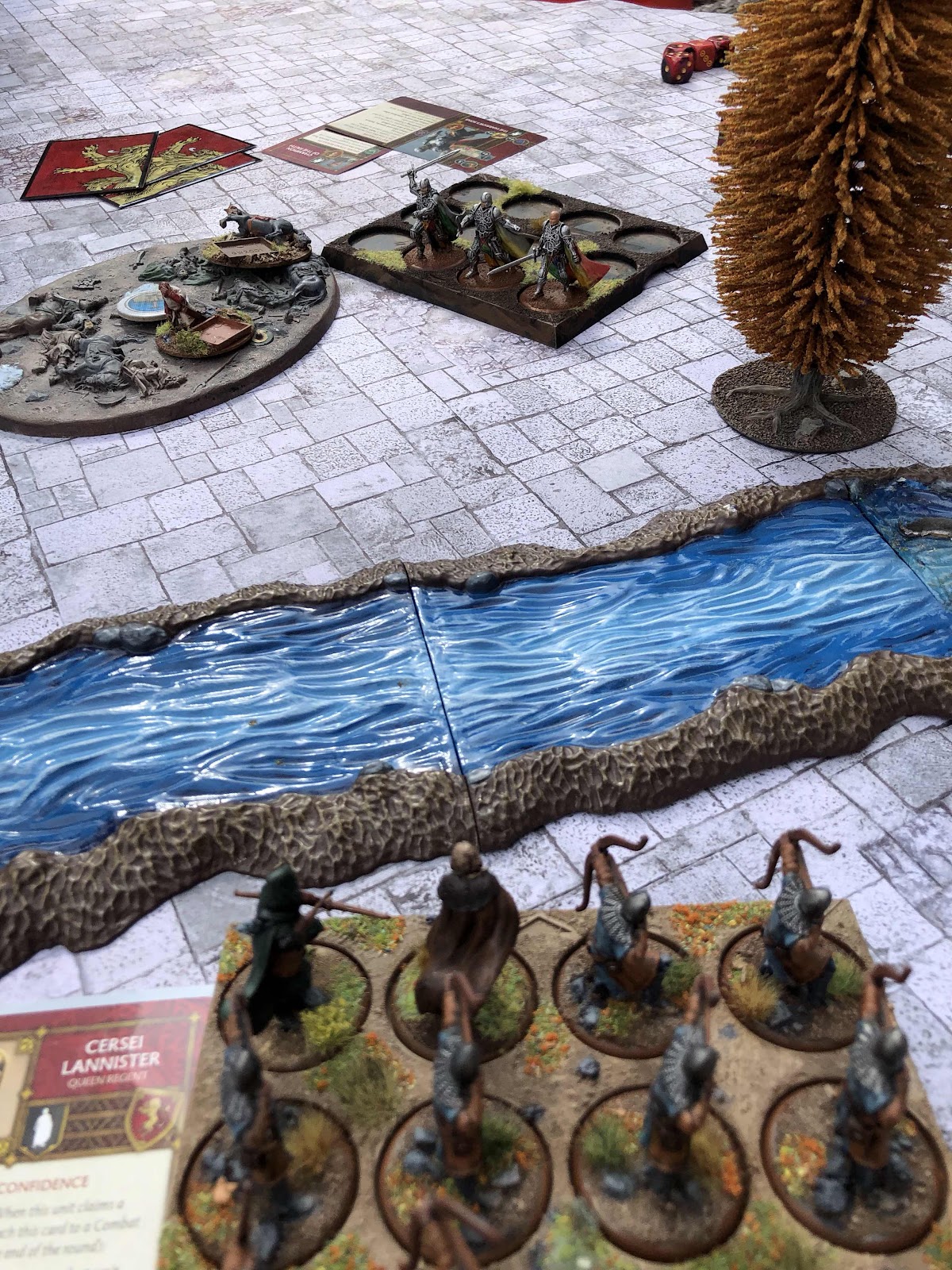 What a momentum I had on round 2! More troops had no entered the battle field...

Round 3. & 4. Lannister cavalry charges... and is counter charged

The Mountain that Rides was the first to charge home and he crashed to the rear of my Bowmen. I was surprised, that any of them were left standing! 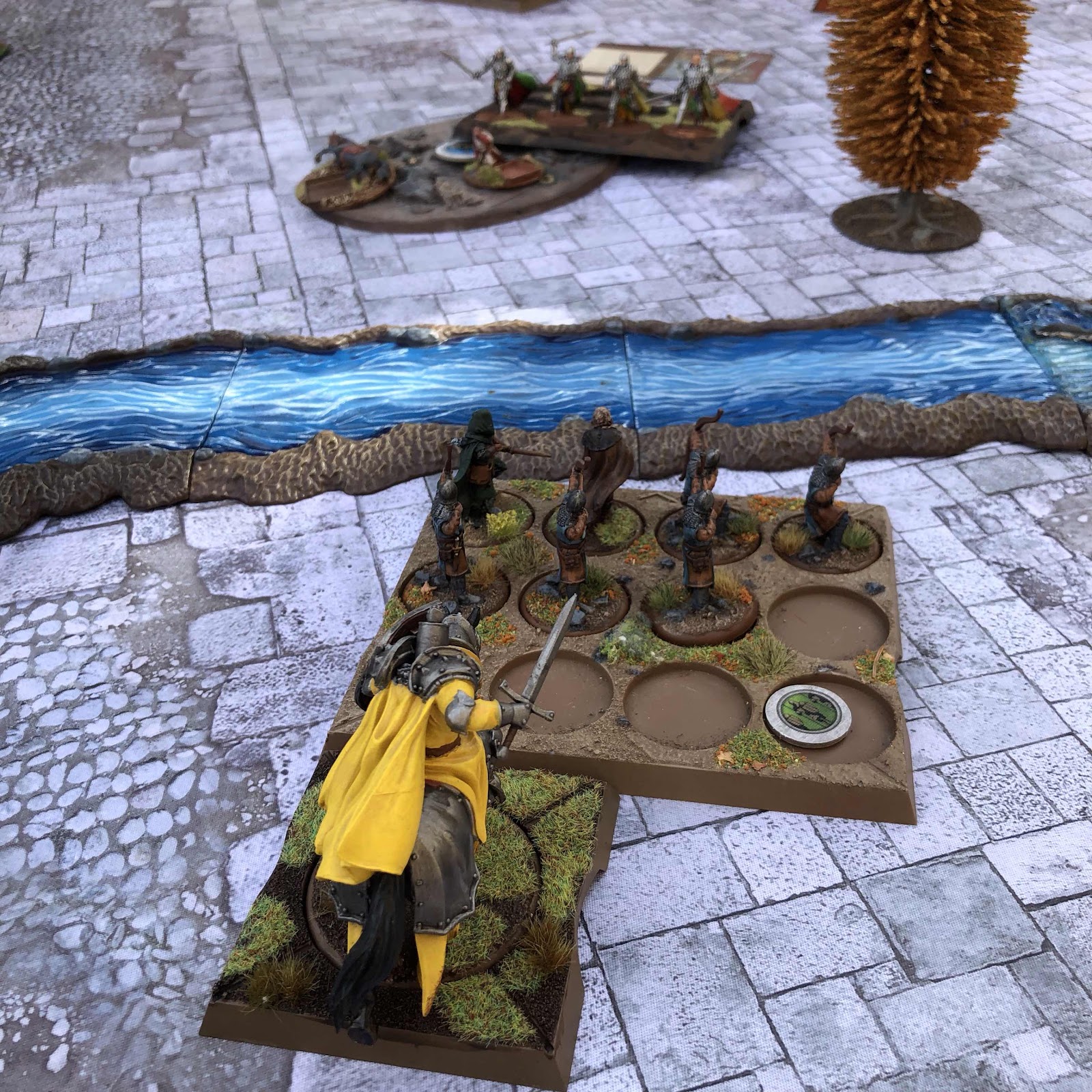 Next his Knights crashed in to the rear of Blackfish & Berserkers (in the meanwhile L. Guards had ran away (like the cowards they are!) and occupied now an objective). My Berserkers survived this onslaught and luckily Robb Stark counter charged with his unit of Berserkers (on steroids!). This was going to be quite a fight on this flank! 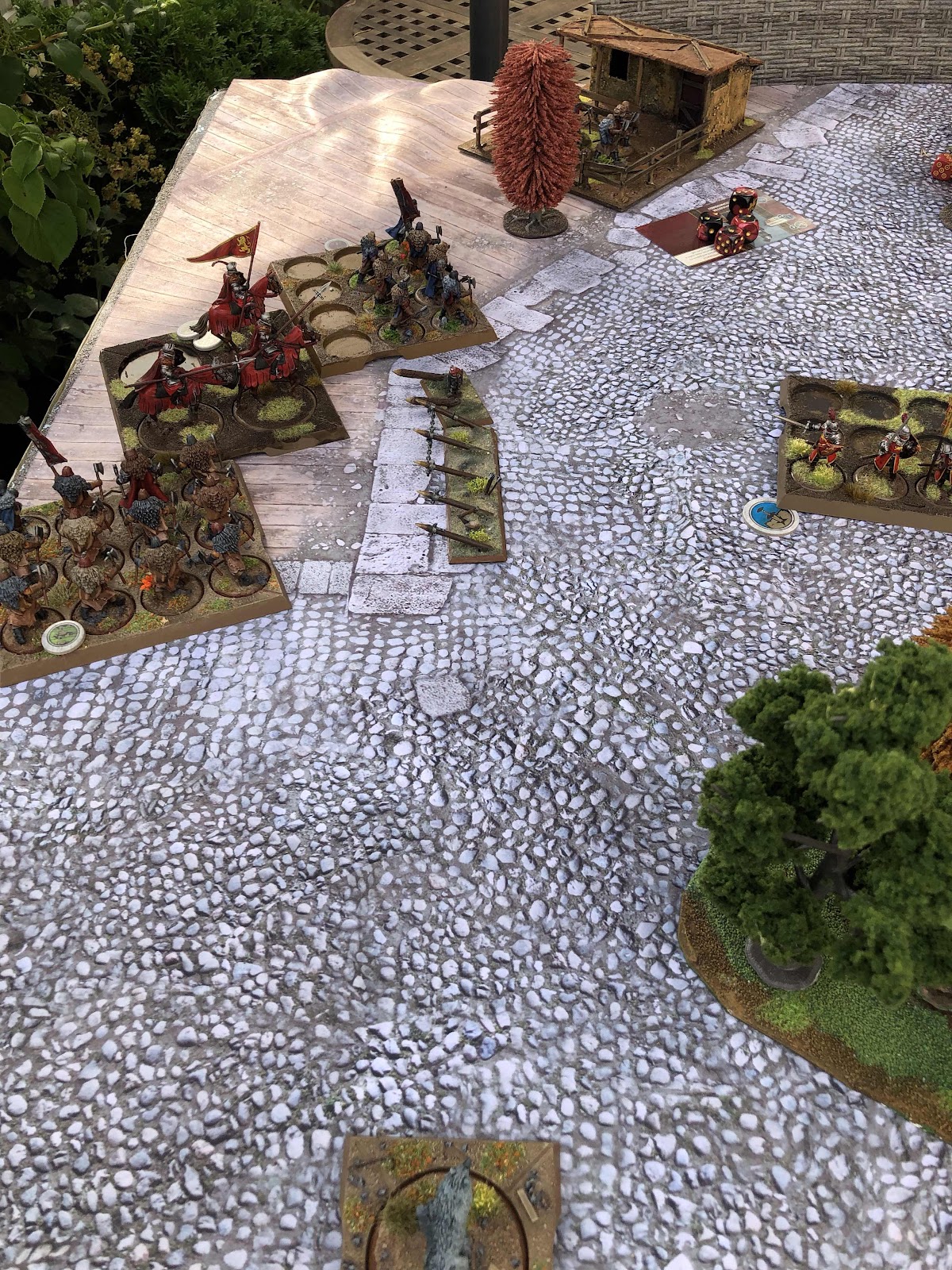 Grey Wind also charged the knights and eventually they succumbed into this
brutal Stark aggression - beautiful! At this point Mikko was holding both flank objectives and was leading with victory points, as I had only scored a point from killing the knights, but my position and momentum was really good... 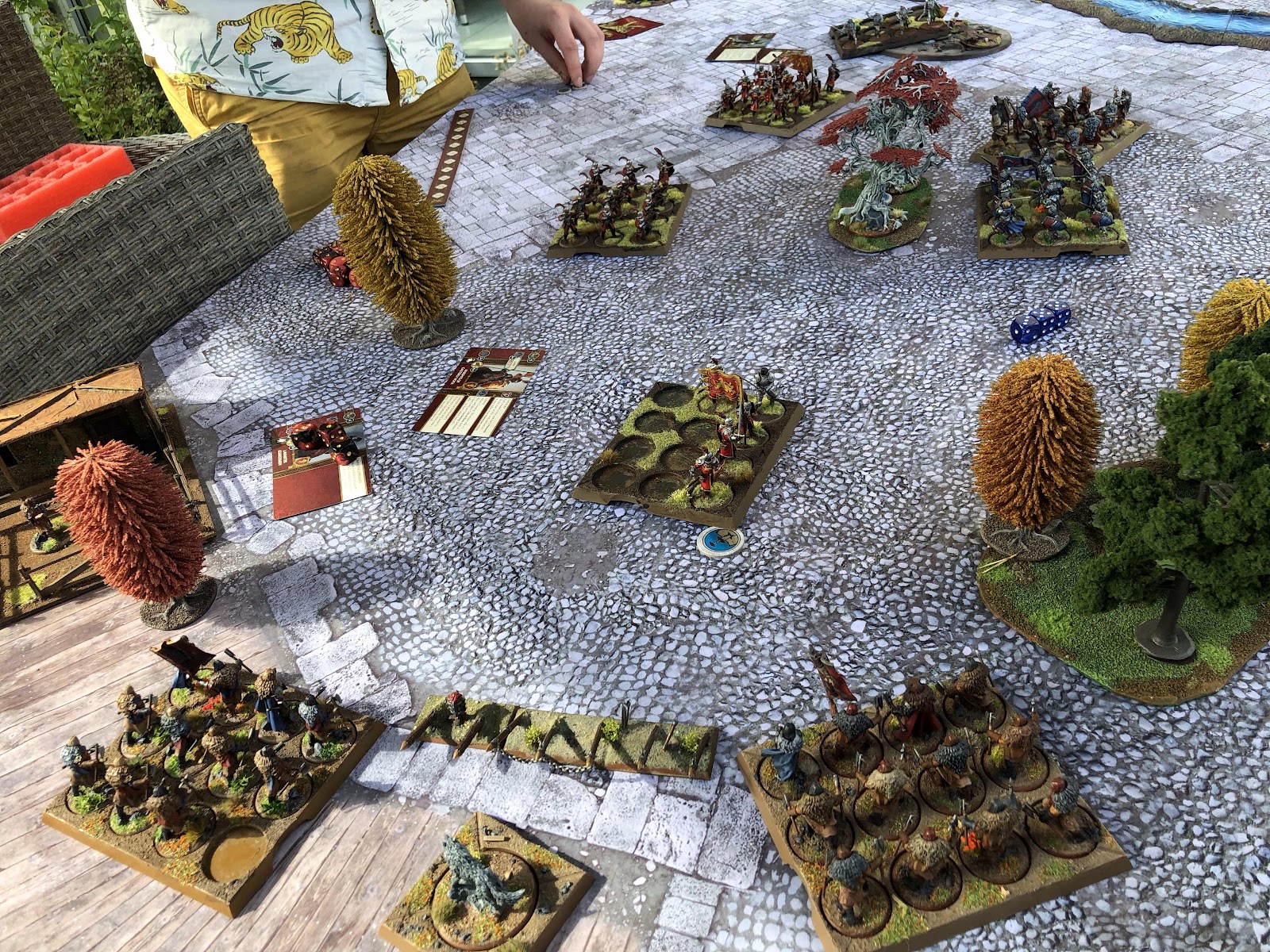 Round 4. & 5. Fight for the central objective

I started round 4 and immediately moved on the central objective with Tully Sworn Shields. I truly counted on them to hold it with their 3+ armour save and a total of +3 bonus to morale (Brienne + Weirwood tree). Umber Great Axes nearby were also a nice insurance for this! 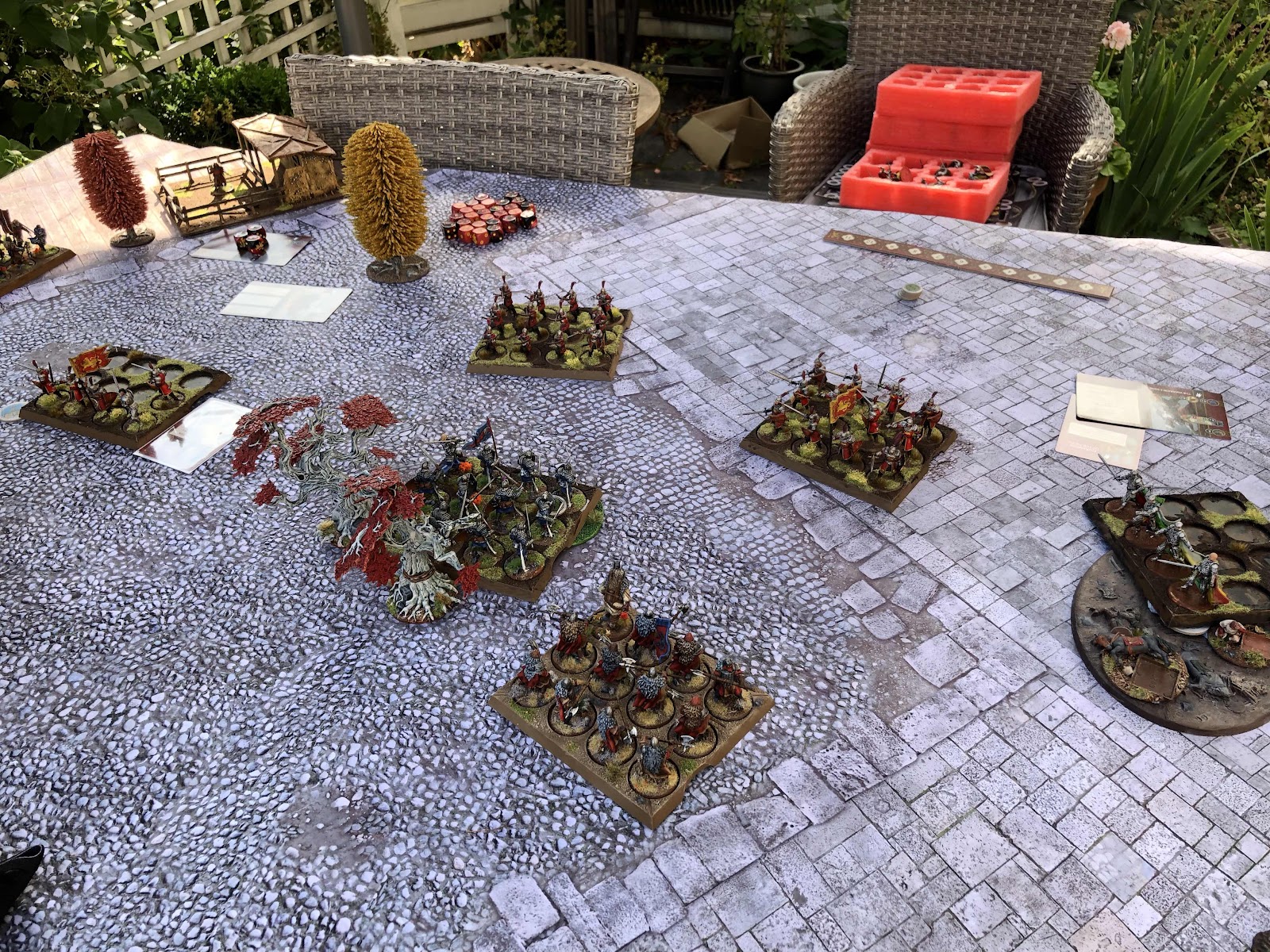 Well, Mikko was not going to give up on the central objective; crossbow men sent bolts flying at Tullies and a unit of Guards charged in... as did Umber Great Axes - poor Guardsmen! 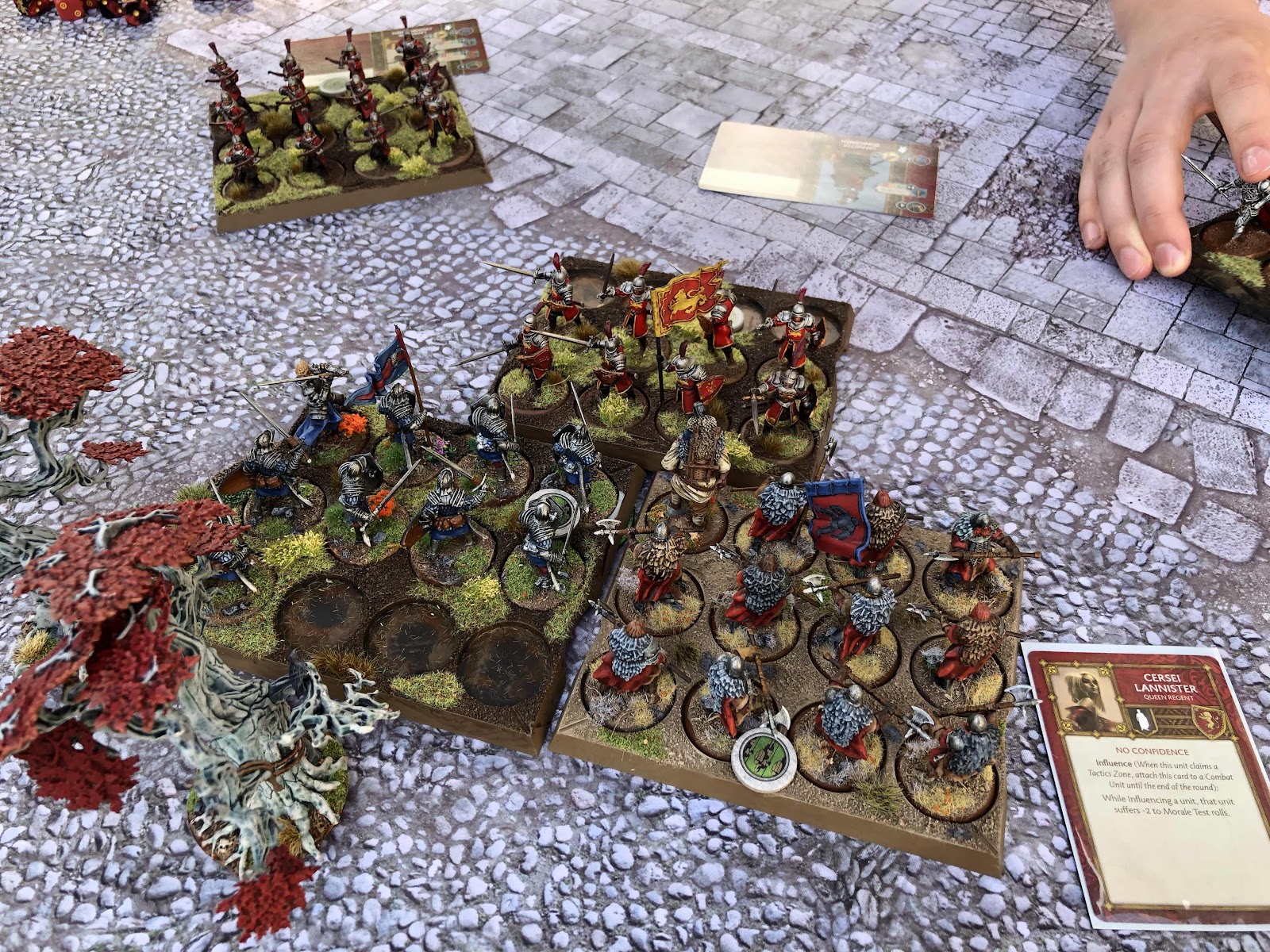 IN THE MEANWHILE Brynden Tully and his Berserkers had destroyed the other Guard unit and taken the left flank objective. That Guard unit had re-spawned from the left table edge - Grey Wind had valiantly charged them to stop them from marching to the objective - brave (and soon dead?) doggie! In the right flank Mountain had finally killed all of my Bowmen and was now approaching the centre - that kind of made me worried. My Bowmen re-spawned to the right table edge and Mikko's Warrior Sons turned to face them... Robb and his Berserkers were holding the re-spawned knights near Mikko's table egde.

At this point I decided to disengage Great Axes to counter the Mountain. Mikko was good mate and pointed out, that charging the Warrior Sons would give me 3 points and the objective (killing the enemy commander was worth 2 points)...

Round 6. Resistance is futile

So, I took his advice and proceeded to slaughter these religious fanatics with ease. 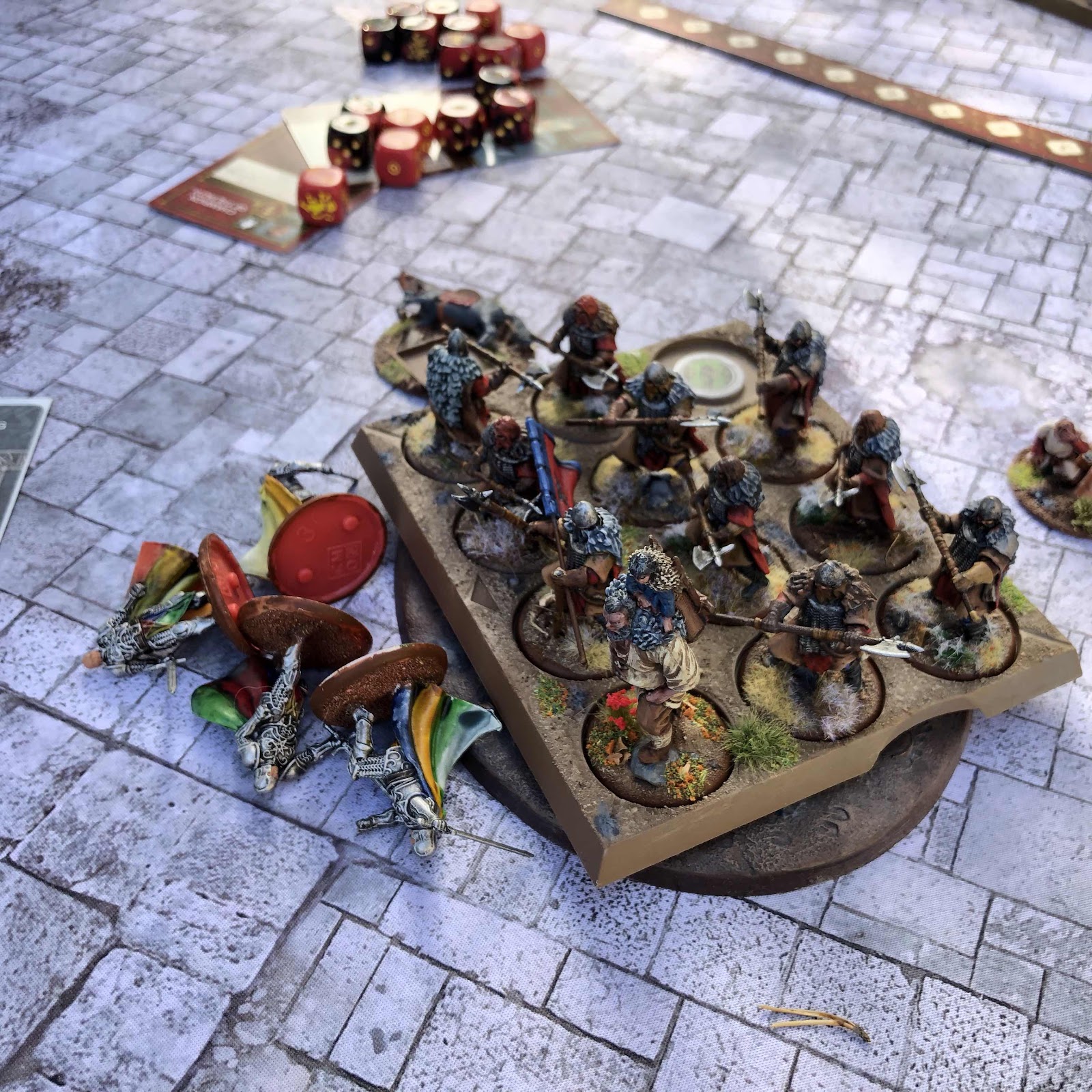 This venture had left Brienne and Tullies alone at the central objective... 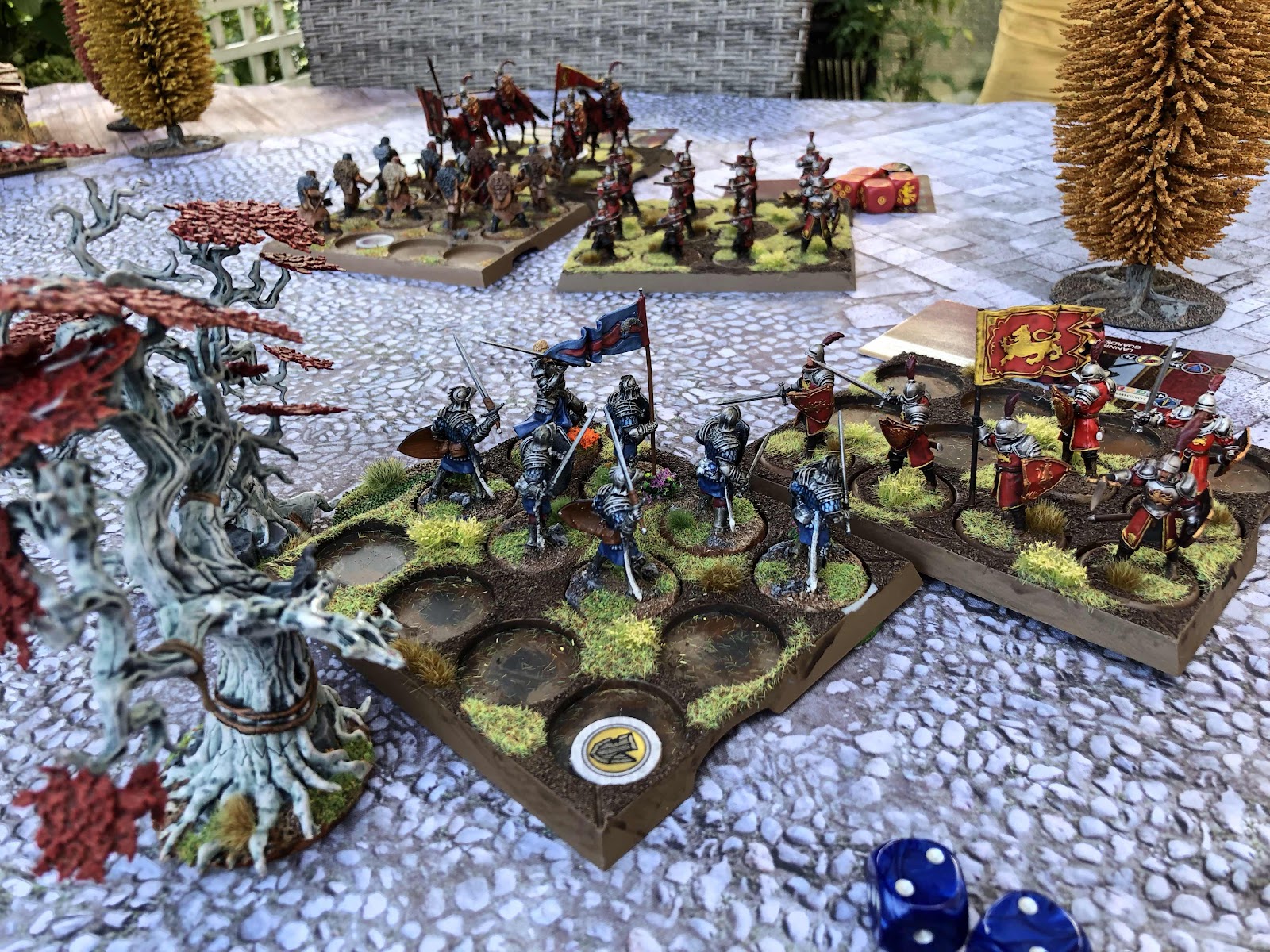 And eventually Mountain took this brave maiden out (what a gentlemen!) 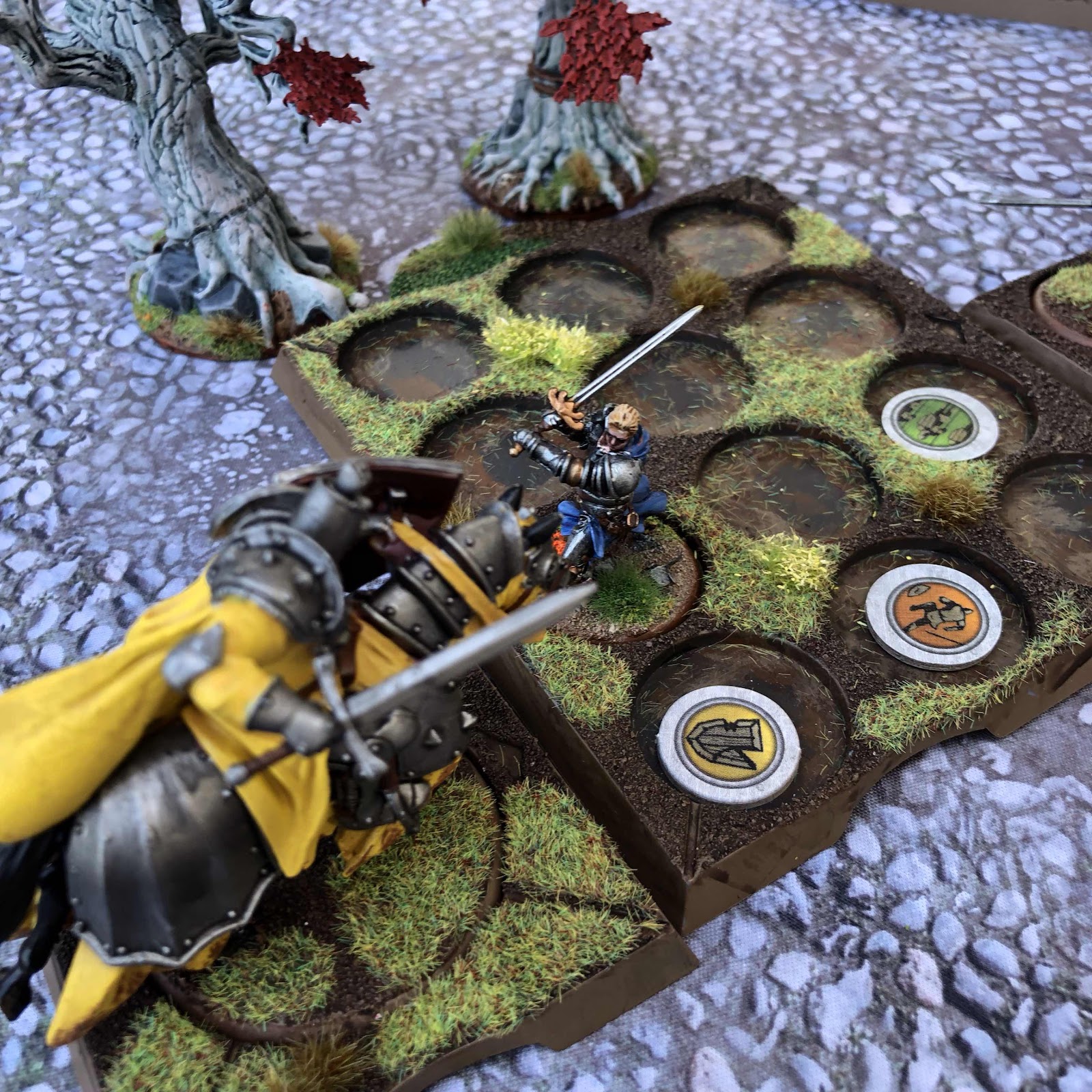 Somehow Grey Wind had survived (by disengaging of course) and now charged this Clegane monster, whom had taken the objective. Well this was a took big a chunk for it to chew! 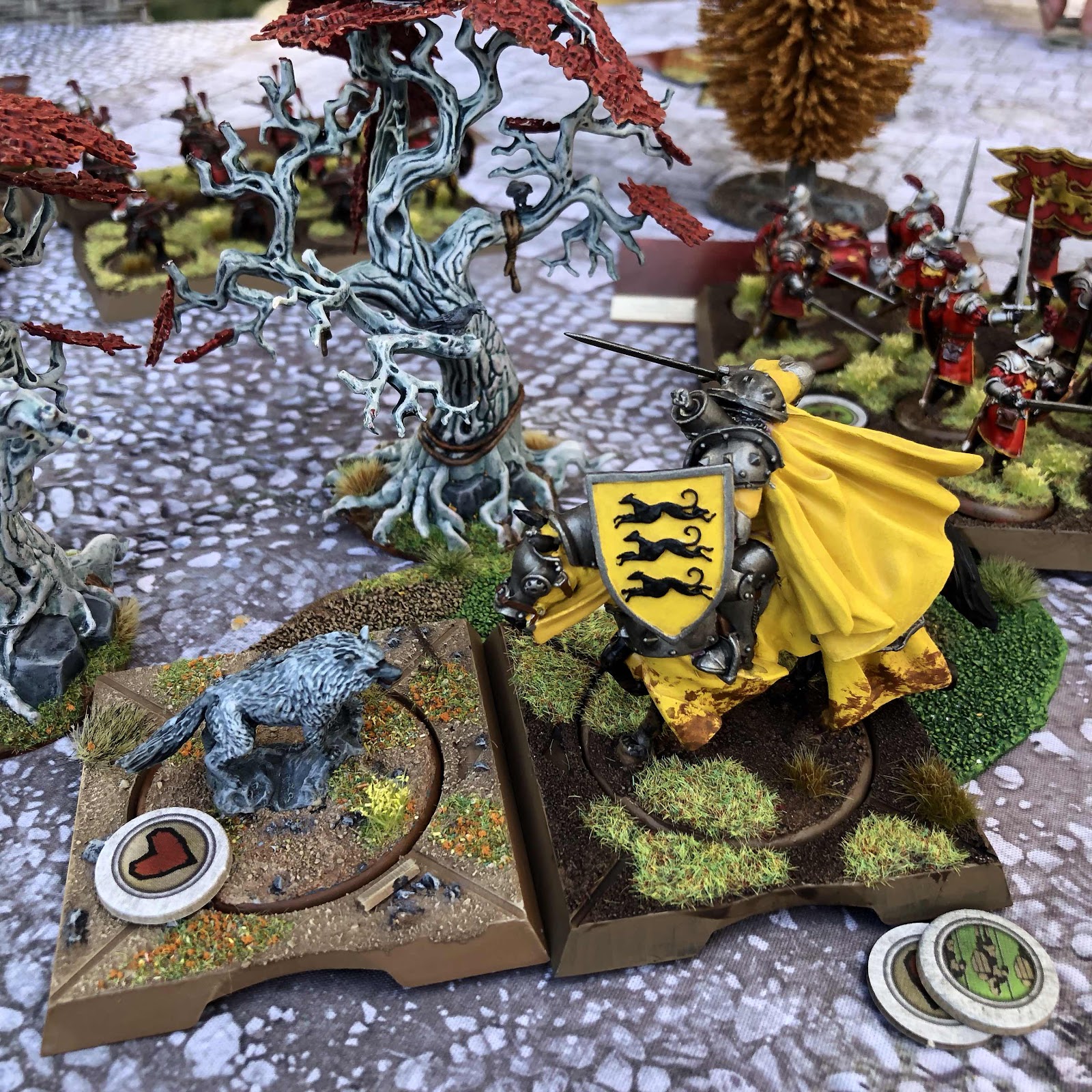 And so the game ended! Final score showed, that I had finally managed to win Lannisters: 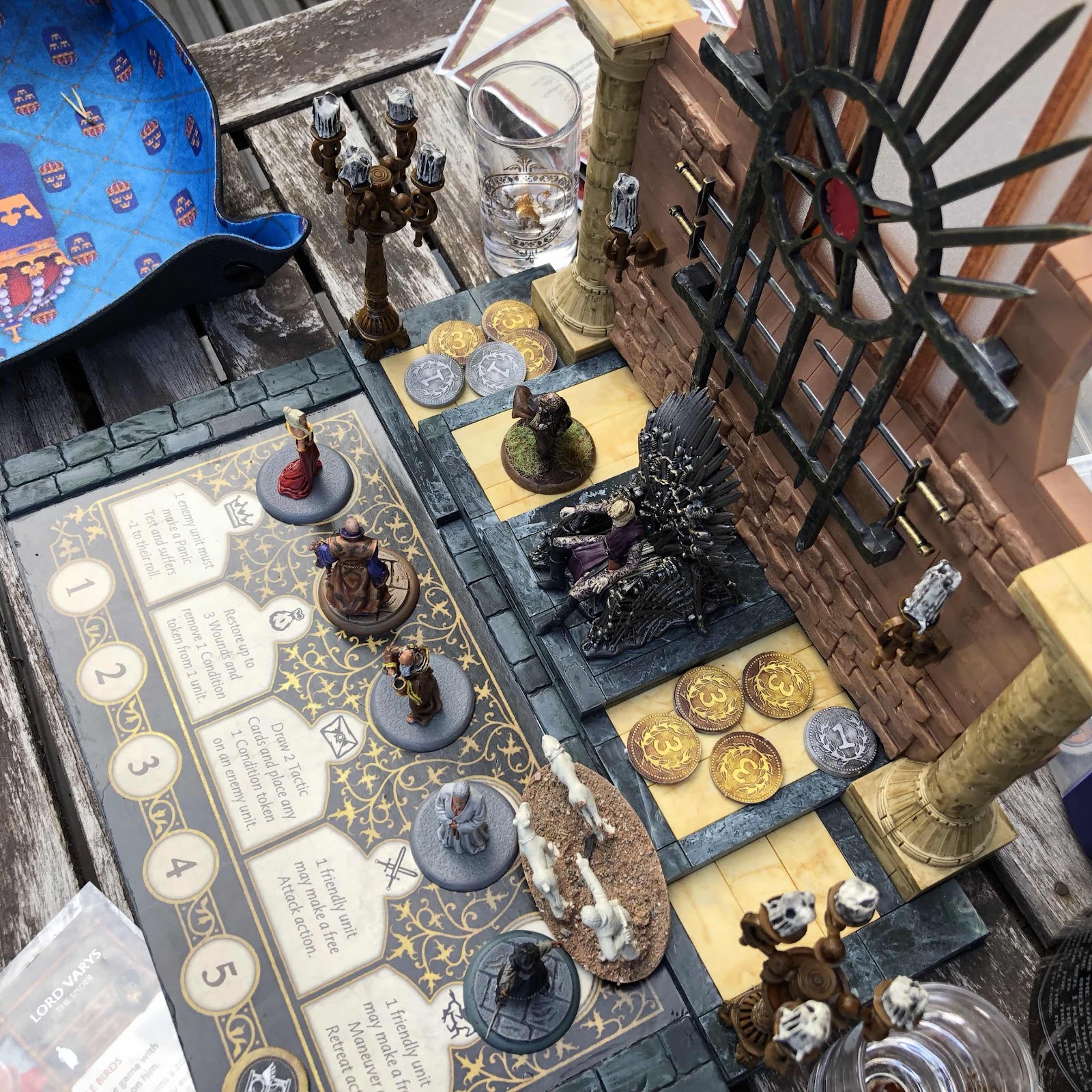 I was so pleased with this achievement, that I offered myself another shot of
fine port! 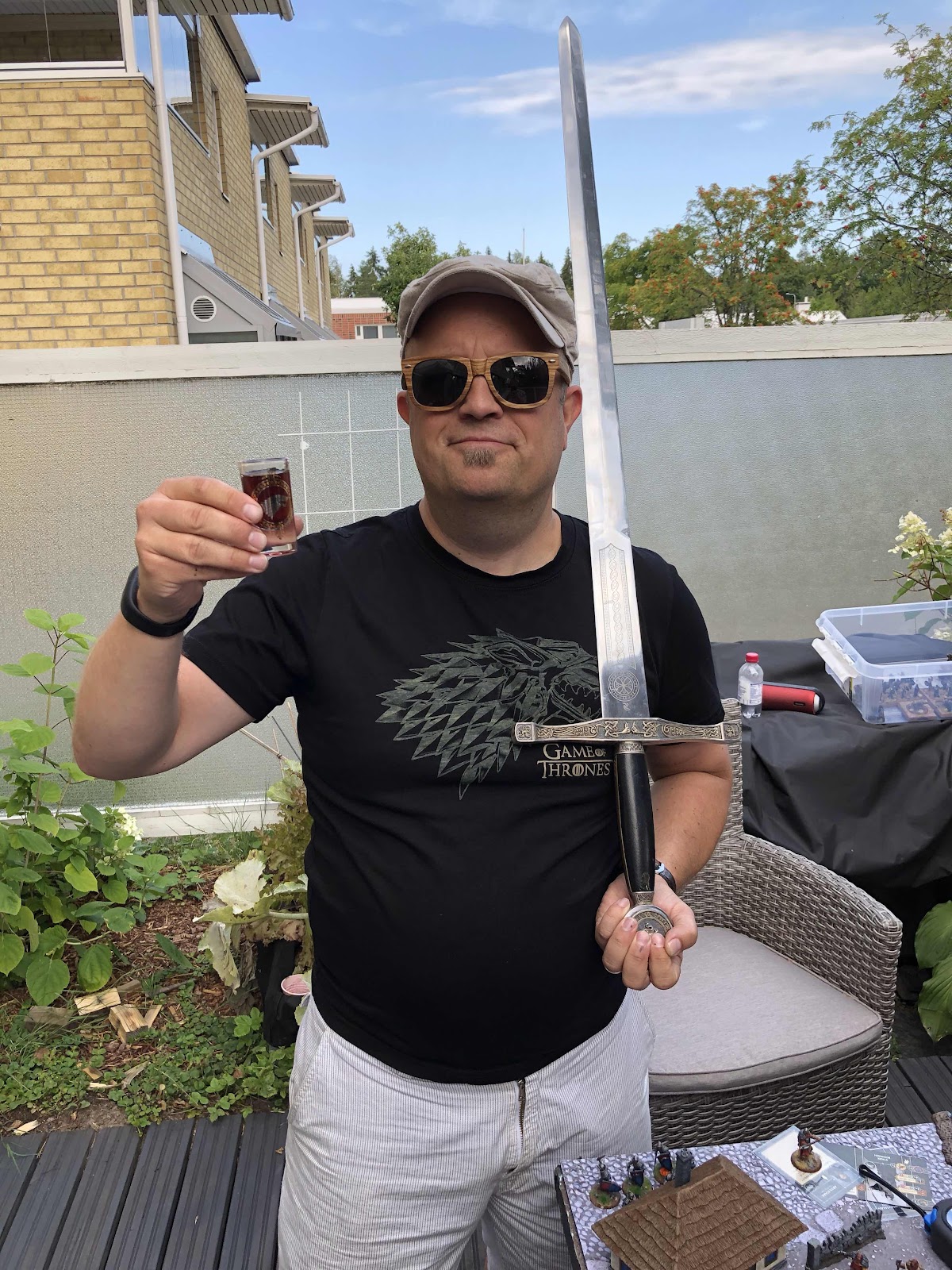 P.S. Varys really sucked! Out of his 4 attempts to nullify Mikko's Tactics Board actions on a roll of 3+, he managed only 2. Traitorous bastard! He was truly working for Cersei!