Our campaign moved on to it's second round and I got my second round game the next night after the previous on, so I was feeling good about my Targaryens - having tabled another Baratheon army (by another player) in a practise game two weeks back... 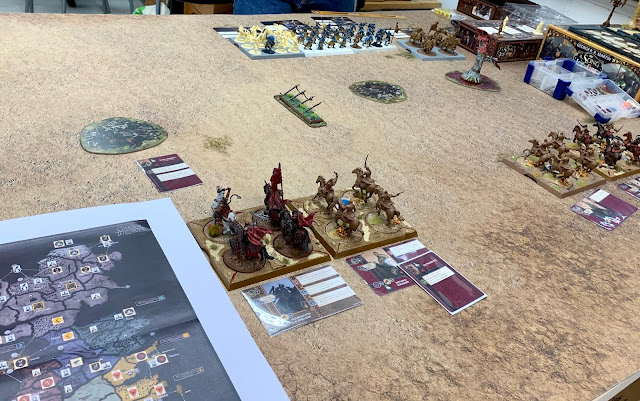 Our Deployment; Targaryens in a pincer formation and Baratheons in a tight battle line


I was once again the challenger, I had announced a war to the OTHER Baratheon player Mikko (aka Stannis), as he was seriously blocking my path to expanding my territory and to King's Landing: 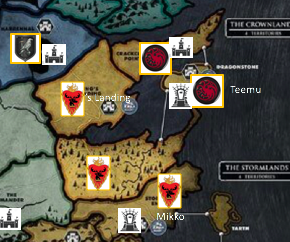 ...but to my annoyance those scheming Lannisters (aka Herkko) challenged Mikko just before my turn! Damn! So I challenged Heikki, as he was leading the campaign and I felt, I had the skill and means to beat him...

This time we played a 40 points game on 4X4 table (which I guess is not so beneficial for Targs).
As Jorah Mormont was wounded (unit destroyed) in my first battle, I had to use a different commander, so it was time for Khal Drogo to prove his worth!
My NCUs were Daenarys and Ilyrio, Heikki had 3 NCUs: 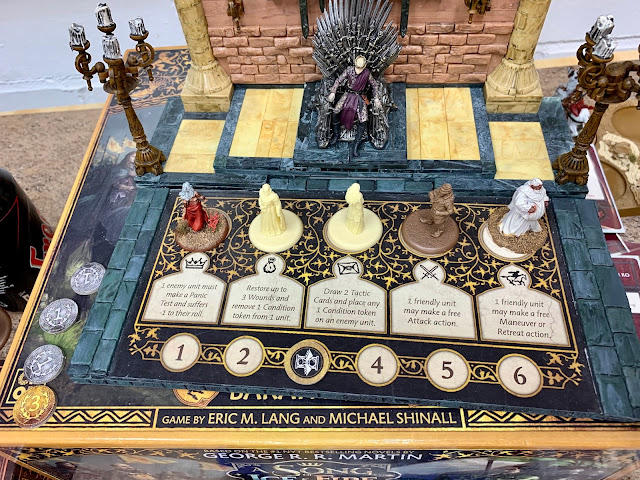 
Heikki's commander was Daario Naharis! I guess he was yet to fall in love with Daenarys. His Combat units were: FM, Stag Knights and 2 X Wardens, some attachments there too.

I started by moving 3/4 units towards my left flank to position myself to over powering charges,
Heikki countered to this pretty well by positioning his units into a "hedgehog defence". Plentiful of weaken tokens were also given to my units. 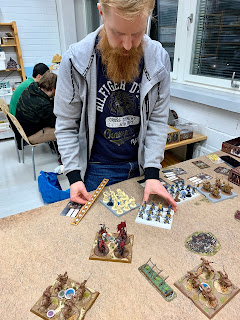 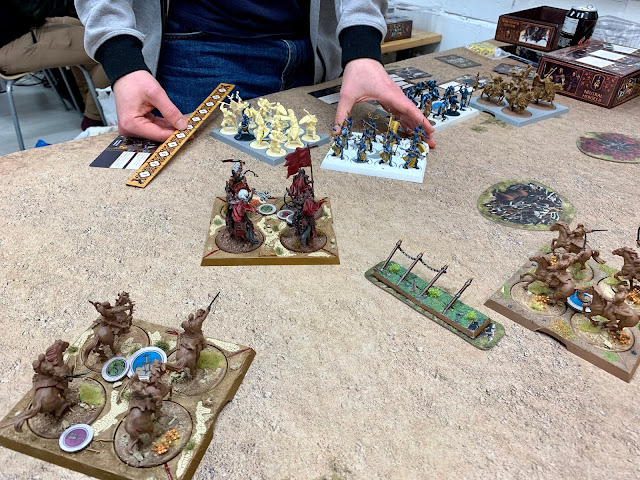 Only 5 Stag Knights fell to this weakened attack and several well placed Baratheon TCs saw Khal Drogo and his FM Guard go down! A disaster, because I also lost the capability to give out victory points by losing my commander. 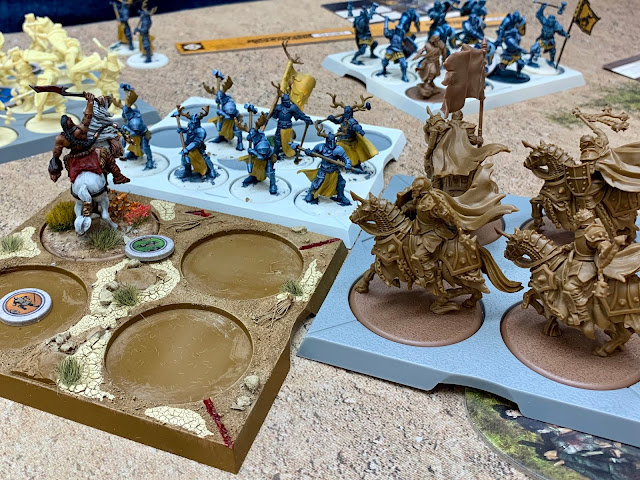 Next my Veterans charged in and they almost wiped out enemy Flayedmen, but the  Heikki played Tycho Nestoris and healed 5 wounds back to them, getting the second rank back too!
Soon my Veterans were also counter charged (Baratheon TC) to their flank, oh dear! 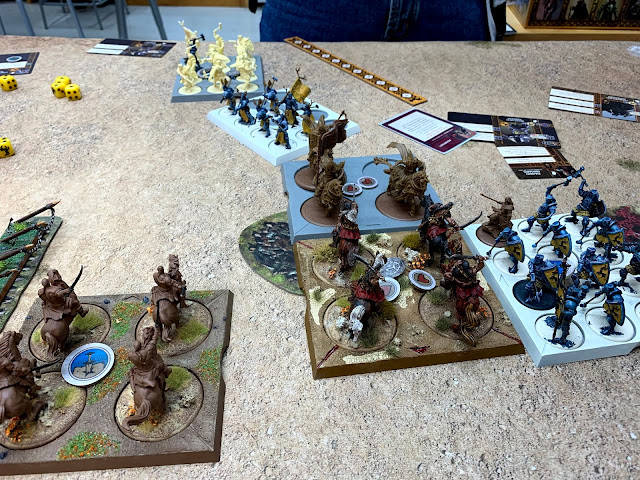 After these counter attacks I considered retreating, but the Wardens, whom had counter charged, were yet to activate and I realised, that retreating backwards would not take me far enough to escape their charge, so I just kept pummeling with Crossed Swords and I also played "Addrivat" on them: 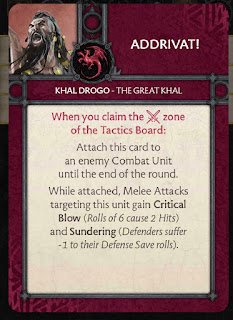 This left enemy FM with just one horsie remaining, but still not destroyed! Soon an attack from Warden in my flank destroyed my Vets, sniff... Somewhere in the tumult of the battle I had also charged in one my marked Screamers, with venerable nine attacks now, but I don't seem to remember whom they fought, probably enemy FM too, because of Addrivat. They also perished ( I believe I lost quite a lot of wounds to failed panic tests during this game).

My last unit on the field was another marked Screamer unit, that had fought against the wardens, to revenge the fallen Veterans, but Wardens were too tough to die completely... finally I had gotten one my four free retreat cards and I retreated to a safe distance...

So, one unit left and Baratheons leading 6-0... only a miracle could win me this game (and I at that moment I didn't believe in this particular miracle happening)... anyhow I would certainly go out with speed: I boosted my speed to eight with "Unstoppable Advance" and Daenarys influencing... 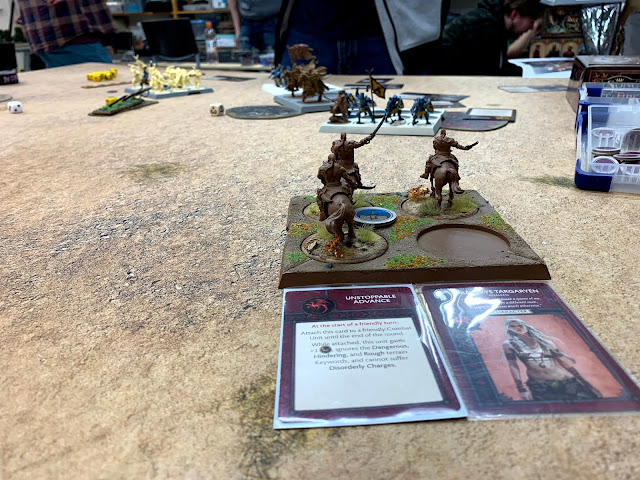 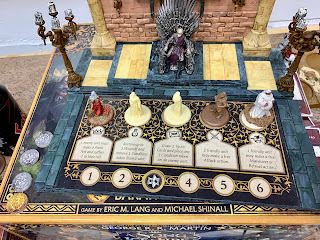 6-0
... and speeded my Screamers to a flank charge, that just barely fitted in. Nine strikes, but Daario had boosted Warden's Armour by +1 and I didn't have the power or TC's to push through their armour or morale! 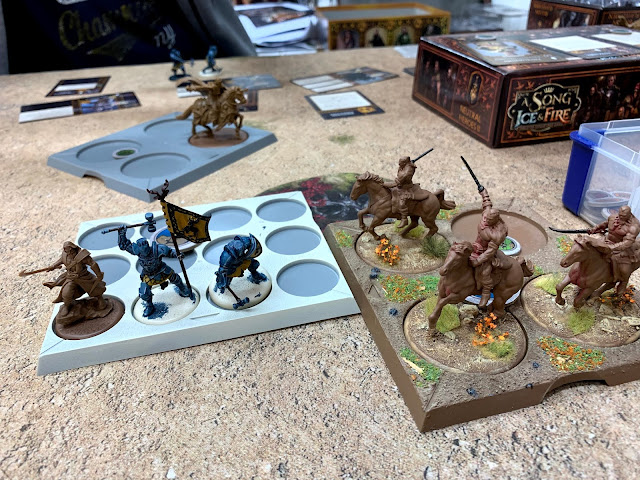 Counter attacks and a one more charge from still kicking FM finished this unit of too, those Bolton bastards really did a lot of work in this battle! 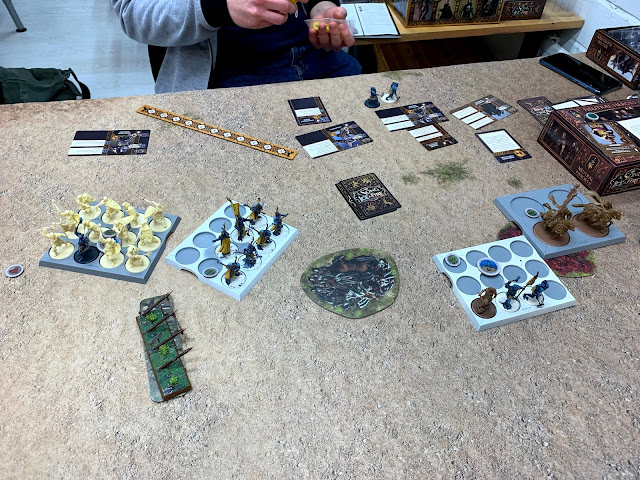 In the end of the game all four Baratheon units were still standing, while my brave (but foolish) Dothraki had been wiped out! Those FM escaped from death quite a few times and Wardens led by Daario were also close to being destroyed, but close is not enough!

Conclusions - why did I got my face smashed in?