Targaryens in Action - Battles in the War of Five Kings Campaign

First round of the campaign

So, we have 10 player ASOAIF Campaign running and playing my brand new Targaryen faction. So far I've played total of four games with them (Night's Watch, Baratheon, Starks, Baratheon) and I've won twice and been tabled twice! So it's a rollercoaster at the moment, but I think I'm getting the hang of it! Here you read about my first campaign game... 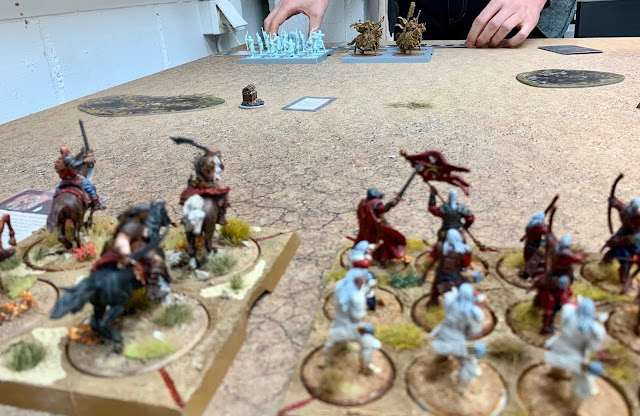 As starter boxes always, also Targaryens have their limitations on army building options. Luckily there are neutral units able to boost them and Stormcrows in a Targaryen army is also a "fluff consistent choice"... unlike Flayed men. 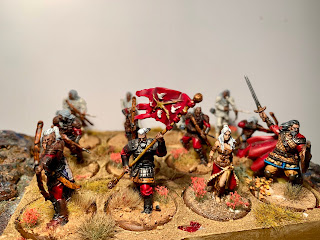 My WIP "Targaryen Archers" aka Stormcrows
with a lieutenant 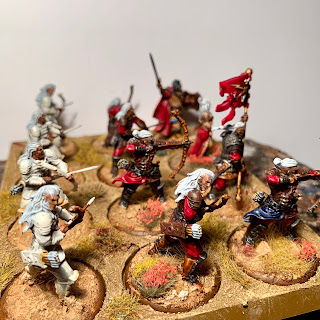 On the first round of our campaign I ended facing Mika and his Starks, combining our most experienced ASOIAF player and a mature and very strong faction. Even if (or just because?) I'm a Starks player too, I was terrified of these prospects and decided  to spend my 3 gold dragons to boost my army with 3 points. As I was the challenger, I had the option to decide on the game size and mode. So I chose 50 points (53 for me) and Dance of Dragons...

My Army composition and battle plan

Out of the starter box commanders I like Jorah's cards far far more than Khal Drogos, well at least they are easier to play! And for example "Martial Superiority" felt like a great insurance against aggressive and terrible Stark units like Umber Great Axes, "Superior Flanking" is an awesome card for a fast cavalry army and finally "Bravery in the face of Death" brings much needed healing.

My combat units are a combination of SB Targ units and some mercenaries. My Mercenaries are here to...

Stormcrows
Flayed Men
My NCUs are also a combination of Targs: Daenarys for added movement and fluff and then Neutrals: Petyr to deny Crown from enemy Walder Fray AND to use what I actually need and my Walder to shut down Stark monsters.

So my plan was as follows: lure / let the (slower) enemy take objectives and hence immobilise themselves, then combine my assets to destroy enemy units one at a time, while their resources are stuck on objectives.

Both of my flanks were anchored by super units (Veterans - Flayed Men) and it seemed I had split my force into two "divisions", which seemed to do the trick as Starks also deployed table wide. This indeed was a trick, as I had no intention to fight Great Axes any time soon! 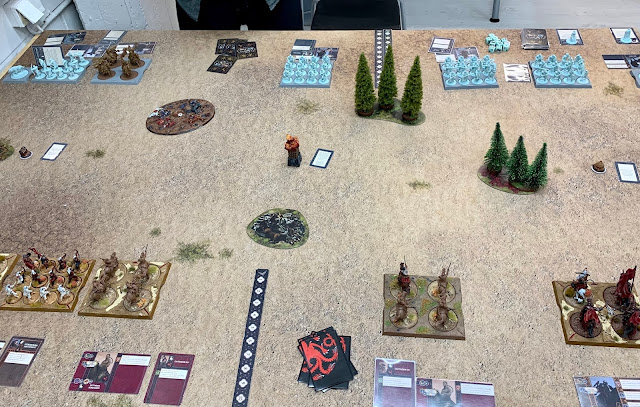 View from my left flank position 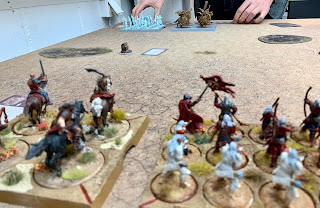 Starks started the game and my early moves (after claiming stuff from the Tactics Board of course) were to move my two screamer units into the centre of the battle field. Starks tried the first charge of the game as Robb Stark led his unit of Tullies forward... well, I guess Tullies didn't really get the idea, as they failed the charge and proceeded to drastically loose an entire rank in a failed morale test! 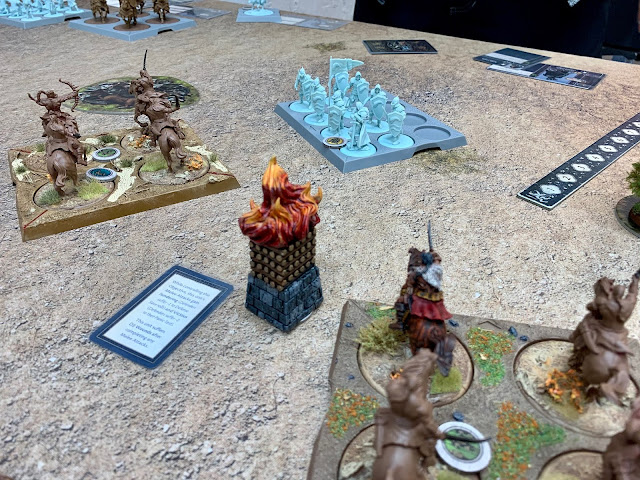 Stark continued their reckless aggression and a charge from FM hit home... but I was prepared for this and played Jorah's TC Martial Prowess, which really blunted the attack! 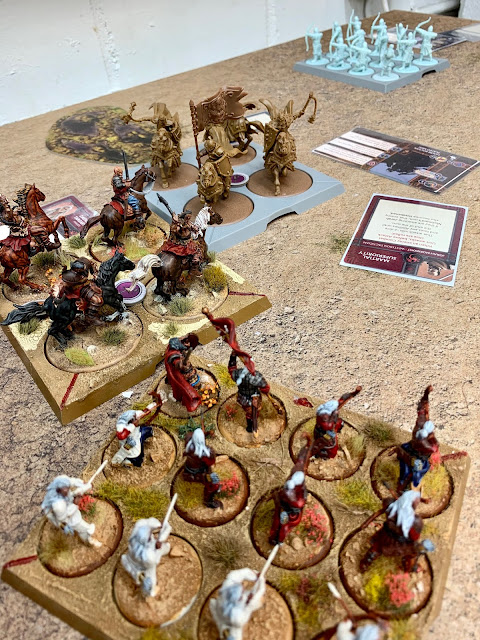 On my right flank also my FM turned left and galloped toward the centre, as the entire Stark left flank watched in dismay and prepared for a long slog cross the battle field!

Second round started with my Screamers first making Robb Starks unit Vulnerable with the Order from the other Screamer unit with an Outrider KO and then slamming into them! As this ended the unit on top of one of he objectives, I claimed it too! Unfortunately Robb was left standing! 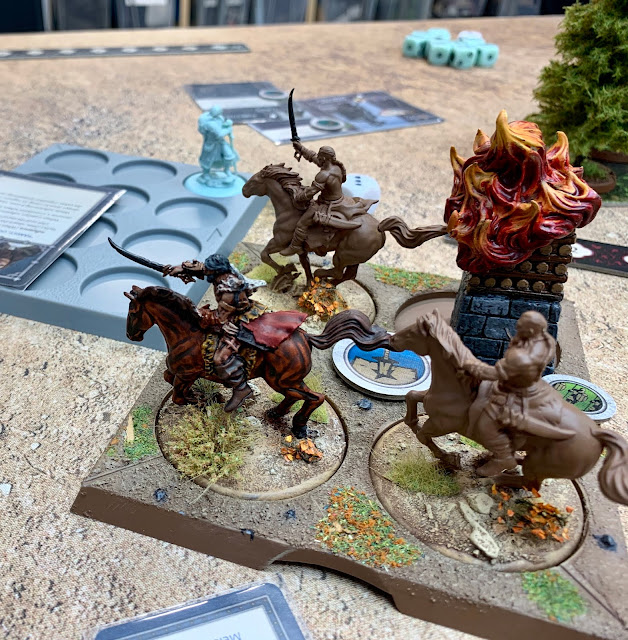 In the meanwhile my Veterans and the second Screamers unit had managed to destroy Mika's FM and now only faced a Bowmen unit and a Direwolf - I (and Mika too) started to feel, that the game was in the bag! 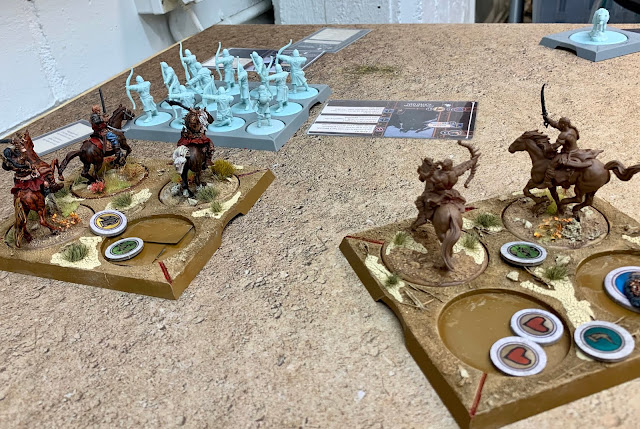 My success continued; FM had again turned, and as Stark units from their left flank had moved towards the centre, they were able to position themselves on round 3 for a great charge position for me starting round 4. There was an unfortunate Direwolf standing in their way and my FM charged this speed bump and swatted it without breaking their stride (I played an Overrun TC, I had thrown TCs away just to get it!)... and continued to crash in to the rear of Tully-boys! 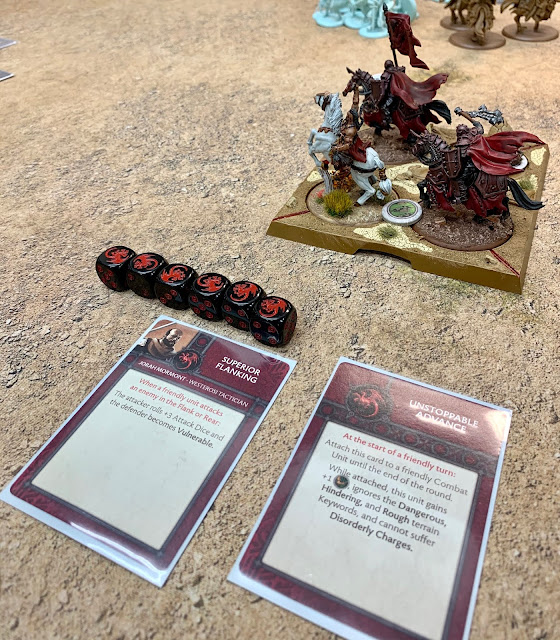 Famous Tully 3+ save was nothing against this devastating Superior Flanking attack with amazing 6 Crits and a total of 16 hits! Tullies were no more! I felt the sweet taste of victory in my mouth... but then!

Starks are a stubborn lot, whom refuse to understand, that they are defeated (even if Mika seemed to realise it)... Bowmen, whom had just moments before been threatened by two Dothraki units, destroyed my Veterans in two consecutive shots!  And destroyed one of my Screamer units too (I think the Direwolf helped in this one)! 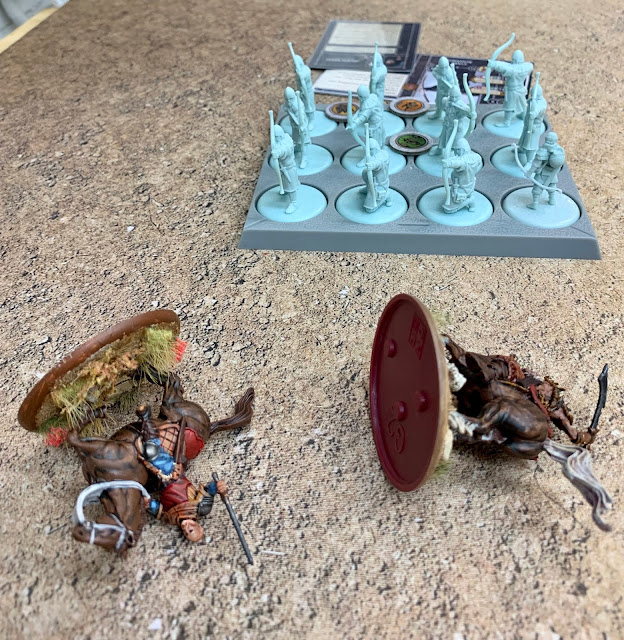 Suddenly the situation looked like this: a Direwolf had crabbed an objective dropped by the dead Screamers, my seriously mauled other Screamer unit was trying to escape from Great Axes with it's 2" move and my Stormcrow archers were wondering, what the hell just happened to the victory that had just been in their crasp (and the heavy purse, that goes with it...). And the FM were sitting on an another objective in the far right flank. 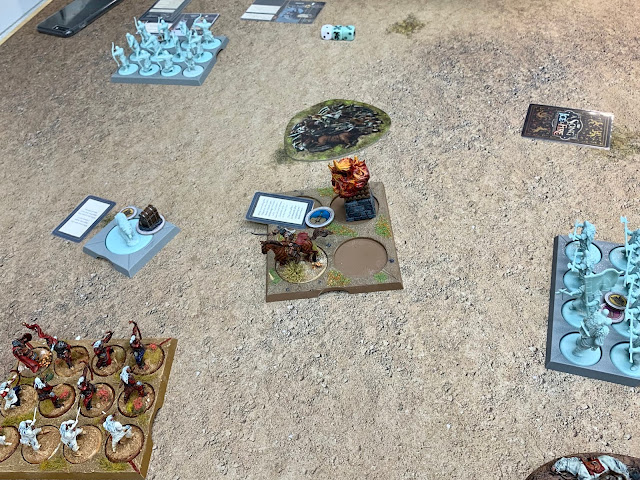 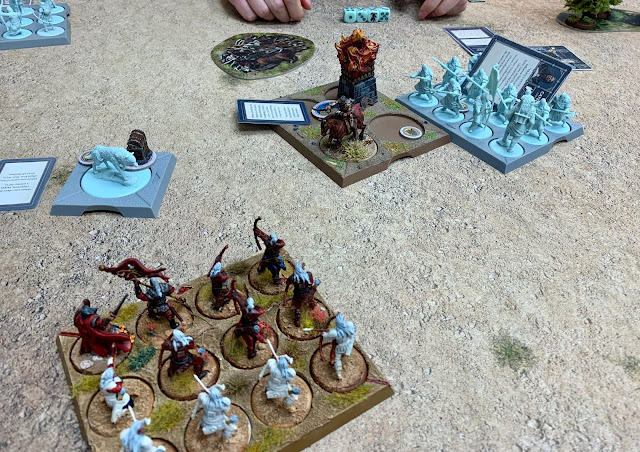 ...but The Stormcrows were still eager to earn their pay from the Khaleesi and shot both the lone Direwolf dead and significantly depleted the Bowmen (some crown zapping helped too).  They even managed to crasp the objective dropped by the Wolf! 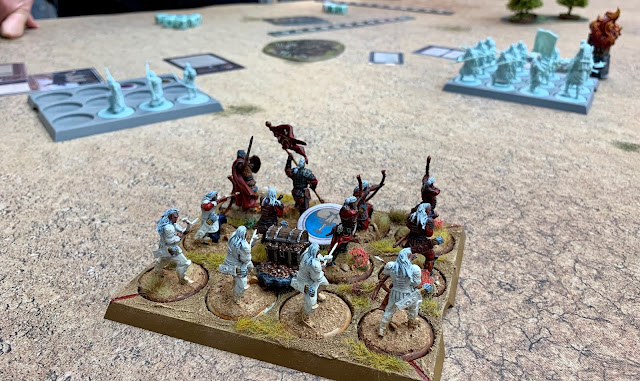 After missing several heartbeats, I was once again able to breath more easily; even if those 3 Bowmen managed to release a one more deadly volley (boosted by Lady Catelyn Stark), I managed to succeed in the panic test and hold on to the objective AND TO THE VICTORY!

Conlusions - why did I win?