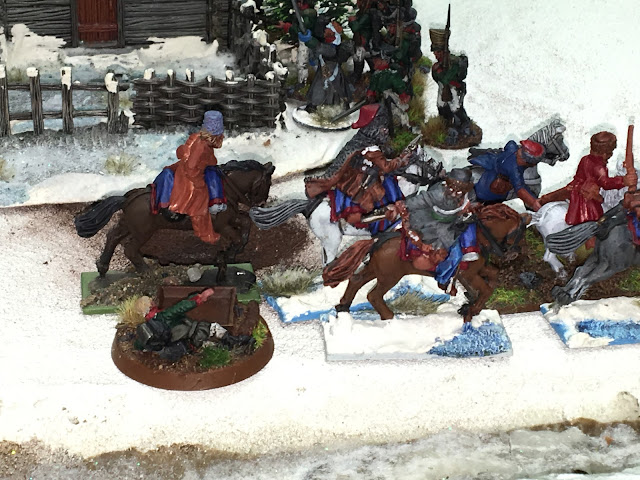 After our visit to Little Wars in Stockholm, we set to work on creating our own resources for the Russo-Swedish War 1808-1809 or "Suomen Sota" (War for Finland). As it takes time to convert and paint the Finnish / Swedish troops we started playing Eagle Rampant (see WI April 2016) or "Pikeman's Lament" with Russians chasing after the retreating French in the cold winter of 1812...

This was a team game for 4 players, 2 of whom had never played any Rampant variant before.

French player must protect the straggler's escape from the field. 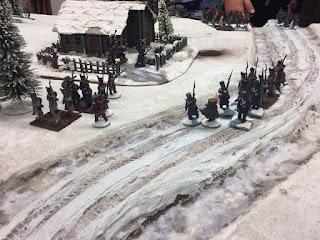 WEATHER: in the beginning of each French round a die is rolled: on 1 a weather die is rolled.
* Any kind of rain image: -1 for all activation rolls, on French blunders (snake eyes) D3 models succumb to cold weather. All shooting ranges are reduced to 12"

Game duration: 8 rounds + 9th on 4+ of D6 (or as seen fit by the Umpire) - we eventually decided a deadline for the game.

Once again the excellent winter table we have built for The Winter War came into use. Once the scenario was introduced and few basic concepts of the rules were explained we deployed as per scenario and the game started. 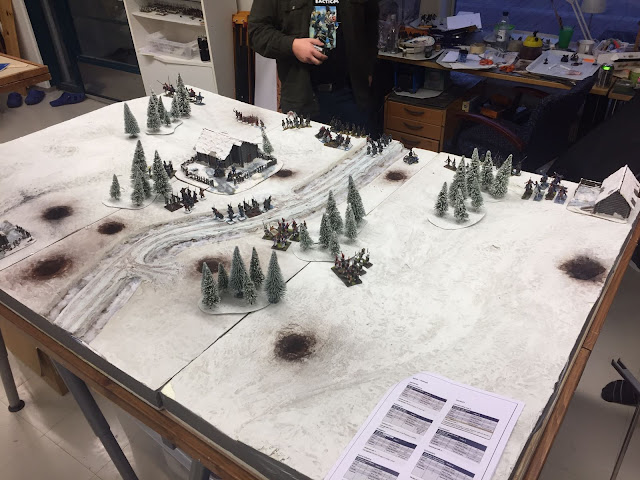 Situation after the first Russian turn 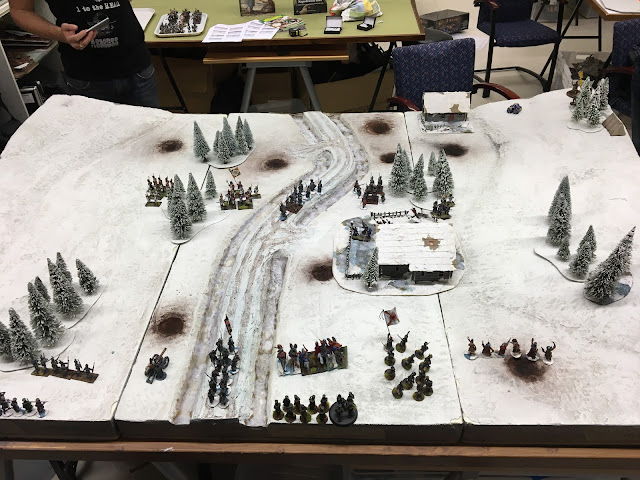 Russian infantry in it's glory! 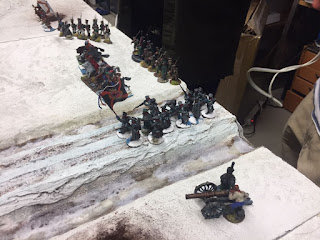 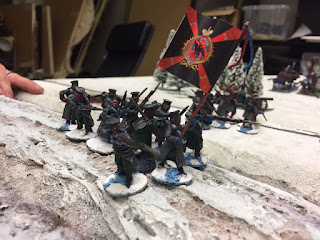 The catch is sighted - Cossacks give chase! 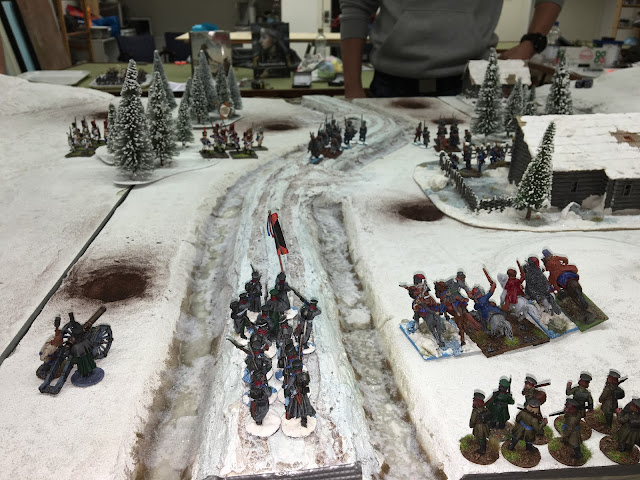 Russian infantry commanded by me follows stalwartly their colors 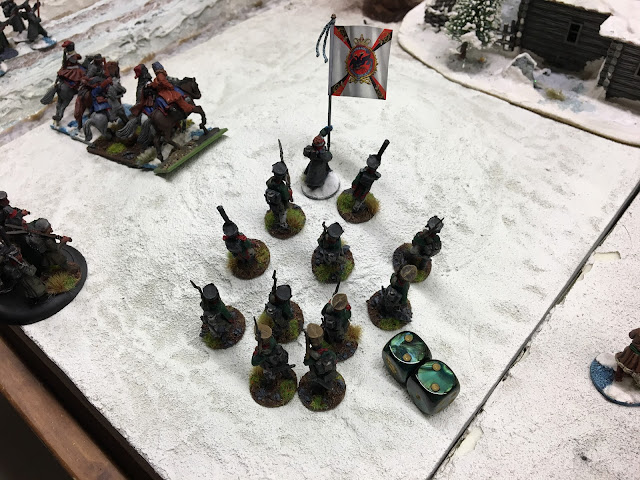 While the poor stragglers are frozen to the spot as they hear the cossack war cries! 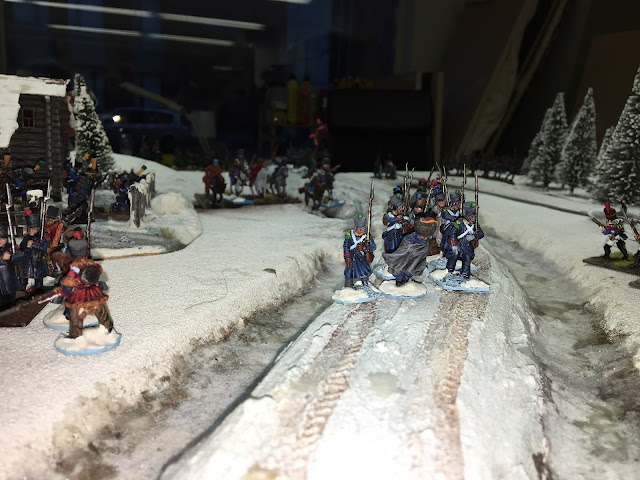 Slow reaction of the Grand Arme remnants proves fatal as the cossacks easily capture the first unit of stragglers and run them to the ground, earning 3 victory points for team Russia! 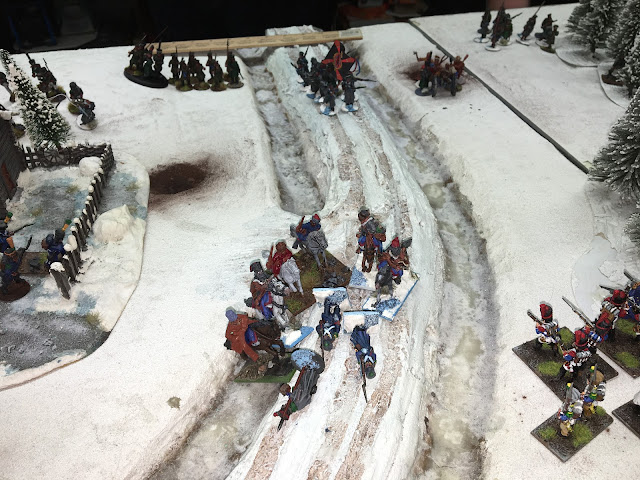 In the meanwhile the Cossack Commander Dmitri and his entourage receive some hot lead to their faces from the muskets of French Guard and as they have just seen the French reinforcements arriving, they decide to call it a day, dragging their wounded commander along. This dramatic event leads to courage tests in all of the Russian troops commanded by Mikko. The other cossack cavalry unit retreats away from the face of the enemy...

French commander has learned his lessons and moves his own unit to block the road and protect the other stragglers unit, whom pick up the pace of their feet after seeing the fate of their fellows. 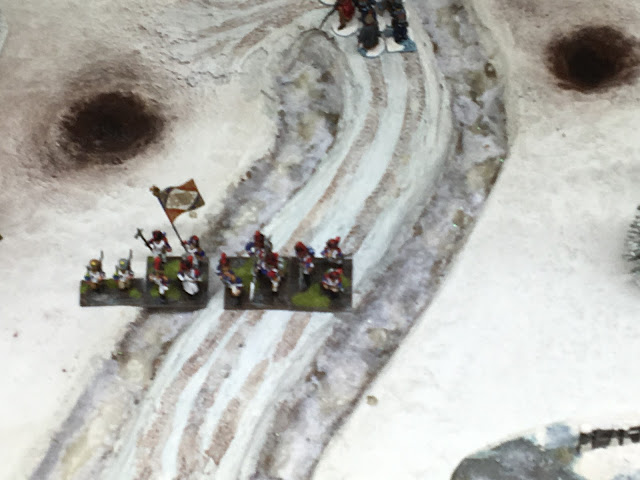 Russian infantry invades the farm enclosed by fences, driving the Fench voltigeurs away. 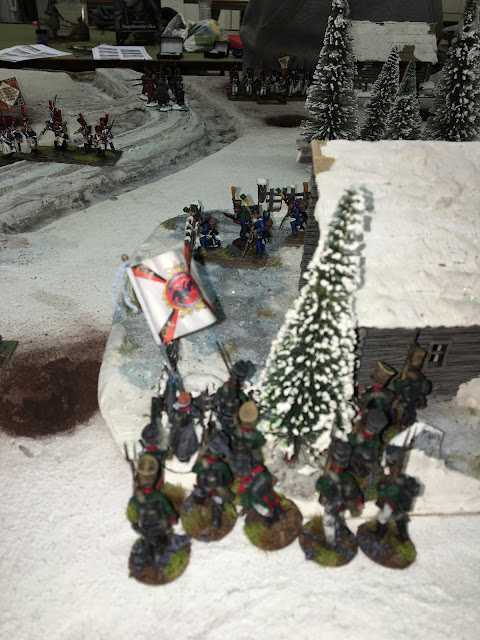 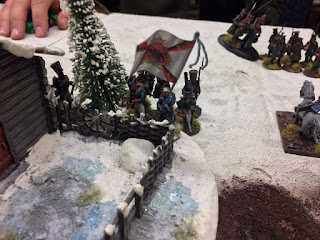 
With the cossack cavalry neutralized there's nothing much we can do to stop the other stragglers unit from escaping, 3 points to the French 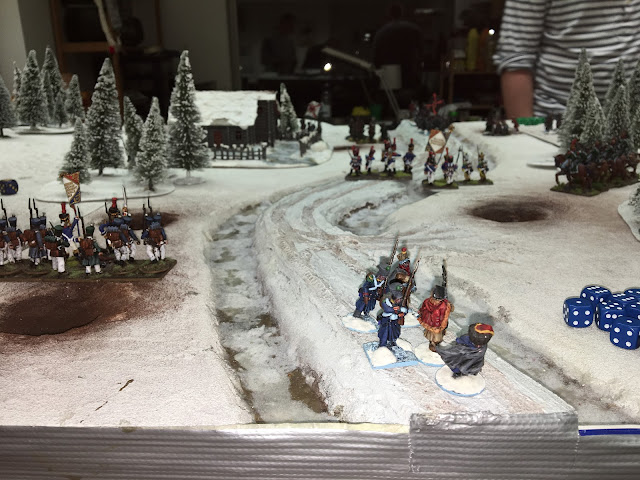 French reinforcements arrive - take the fight to the enemy!

All stragglers either dead or escaped, the French clearly decided to take the fight to the enemy to make sure, there wouldn't be any similar engagements in the near future...

French (or Polish) Uhlans gallop to the field 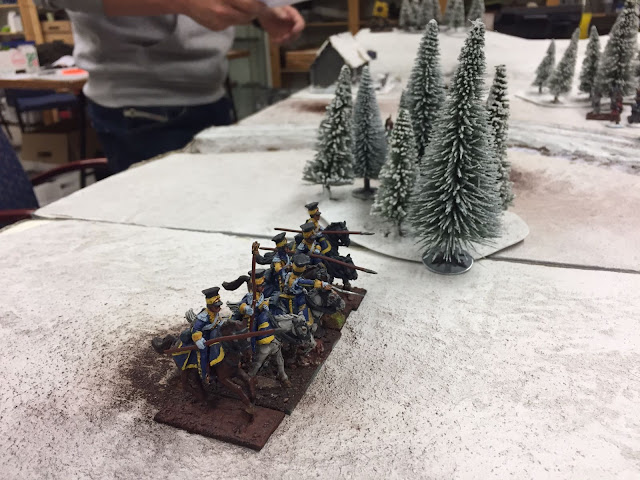 French commander and his "Les Bleus" look surprisingly fresh and crisp, even if they have spent the last months retreating through Russia! Even the flag is starched! - Marko's miniatures 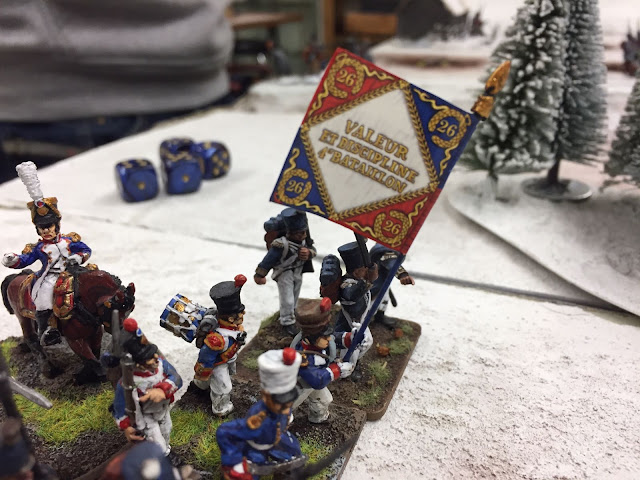 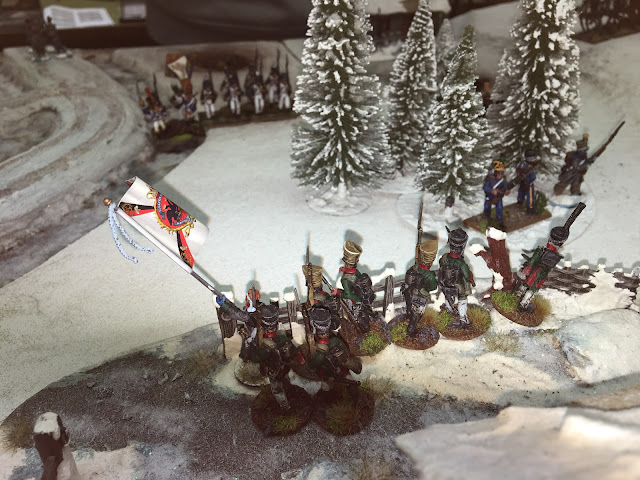 The French reinforcements start to take the fight to the Russians 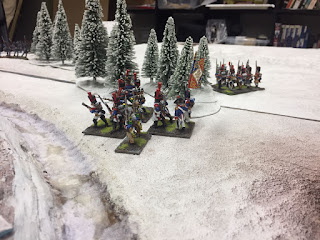 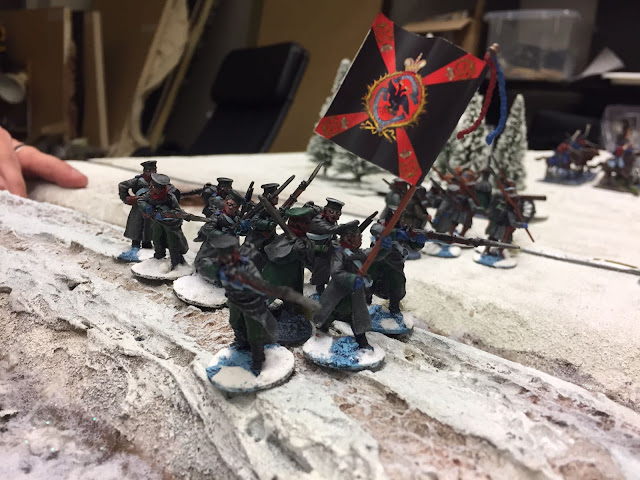 My co-commander kokelas Mikko (soon to be an ensign)  watches as the two pros make their evil plans. The Savolax jaegers, whom had joined Russian ranks make a daring dash from the cover of the woods (rolled snake-eyes for activation) and end up facing French lancers and a unit of French line infantry... 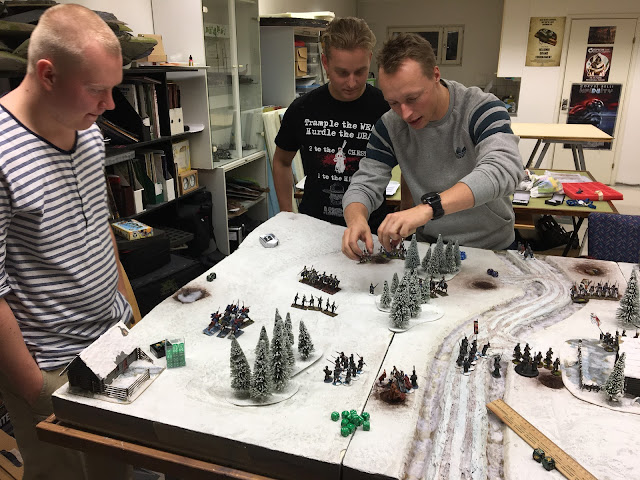 But unfortunately the black powder of these jaegers has gotten wet, the just stand there! 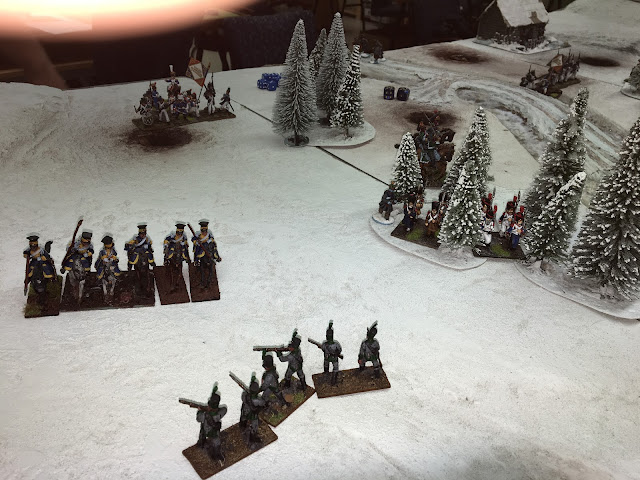 In the meanwhile on the other flank; the French elite cavalry (curassiers) finally get their horses moving (maybe the 7+ to move is a bit too much, they are elite anyway) 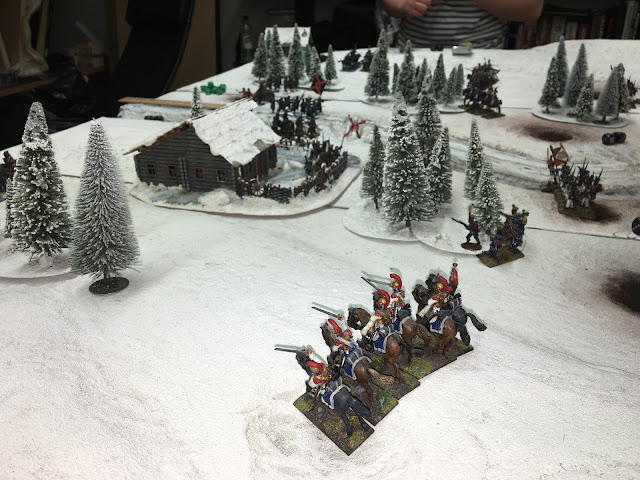 Finally the jaegers have manageg to fire, causing severe casualties to the lancers (whom never bothered to attack). They joy is short as the French infantry finally realize, that they excel in melee... 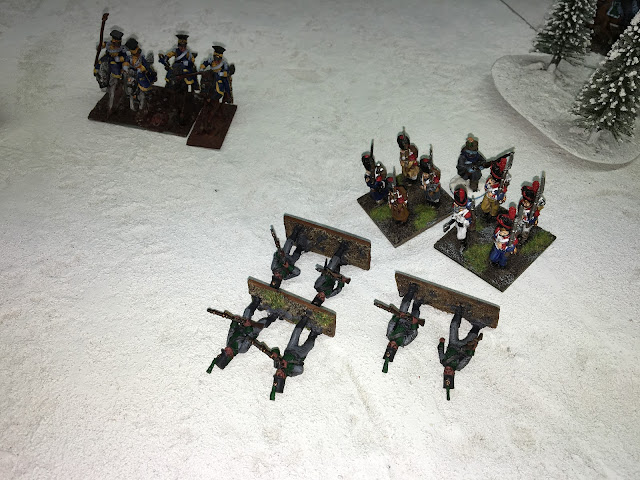 After making short work of the jagers, they proceed to take out the Russian gun 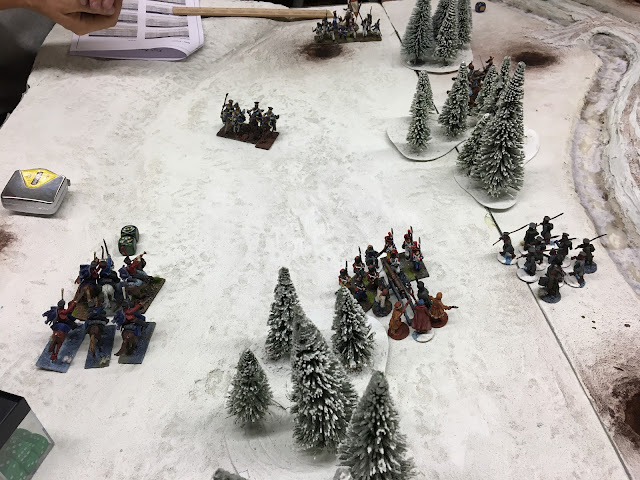 The deadline was reached and the sun set over the bloody battlefield, it was time to calculate the score...
Both sides got 3 points from stragglers (one destroyed and one escaped), 5 of our units destroyed / routed and we destroyed routed 4 French units... marginal 8-7 victory for the  French 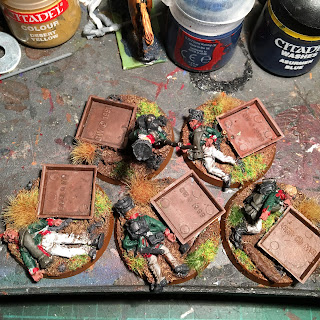 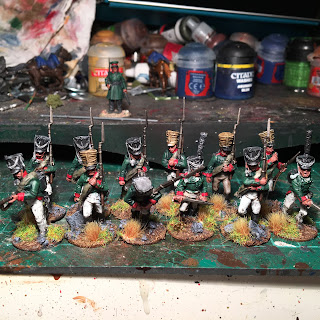 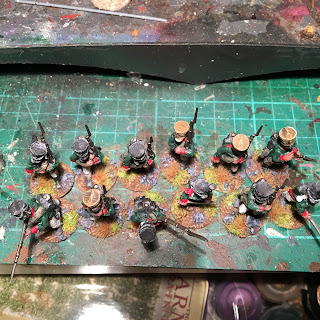 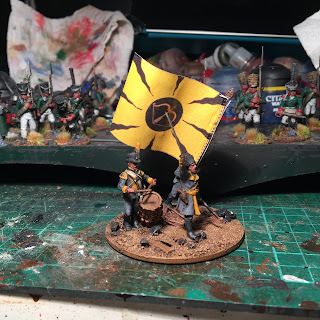