I'm playing the Saga Limes campaign with a club fellow Timo. My Late Romans against his fierce Saxons. 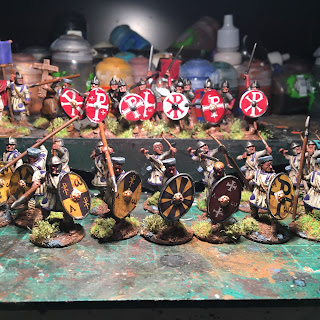 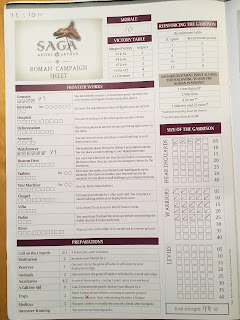 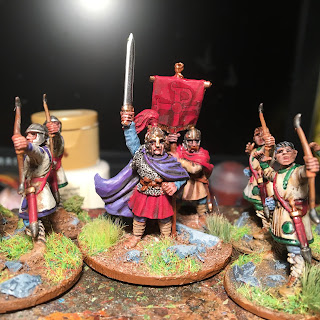 Check out how the minis got painted here

As the first campaign ended so quickly, we agreed to reboot, scale up and balance. So we recruited two more players (Kalle and Sami) from our club and made amendments to make the campaign work on 2 vs. 2 mode. Here are the changes I suggested:

Saga Limes Campaign - expansion to 2 vs. 2


Goal: make the campaign less vulnerable to ending too fast. This is achieved example by

1. Barbarian players both do their own plans & warband building
2. Barbarian spent time units are added together and then the total sum is reported to Roman (defending) players
3. Roman players split the TU's by default. Should they so choose, they can agree on different split, max 1/3 and 2/3 shares.
4. Barbarian player can donate the other max 1 point of Warband points eg. B1 buys option X (which he can buy twice) and donates the effect to B2.

* Once during the campaign both sides can (secretly) switch opponents

We agreed to implement the changes bolded and check out after three rounds should we need the rest.

Practice game: Saxons (played by me) vs. Rome. 4-0 victory to Rome.