My club mate Jaakko ( @jamopower in IG) has been slowly building a napoleonic Russian force and we’ve been pondering which of the many available, skirmish level, rulesets we would use.
We’ve been playing napoleonics with Black Powder, Muskets & Tomahawks (were waiting for the napoleonic supplement to be released for the 2nd edition), Rebels and Patriots, but as Jaakko wanted to play with a smaller number of miniatures we decided to give Sharp Practise a go. Eventually Jaakko painted 30 more miniatures for the game, so the argument for a smaller amount of minis sort of flew out of the window, but who cares! 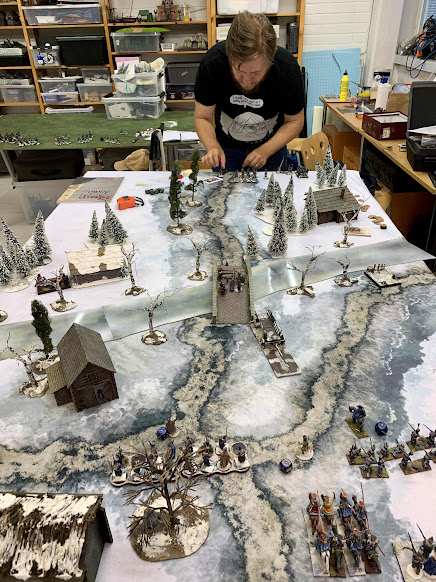 My main drivers for this game were to get back into black powder era gaming and especially to the theme of Retreat from Moscow. It’s an absolute pleasure to paint miniatures from Perry Miniatures dedicated range. 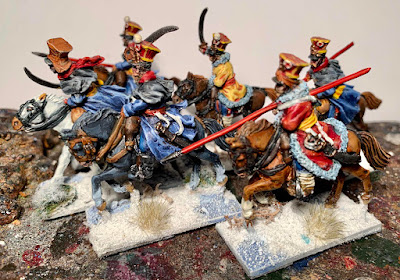 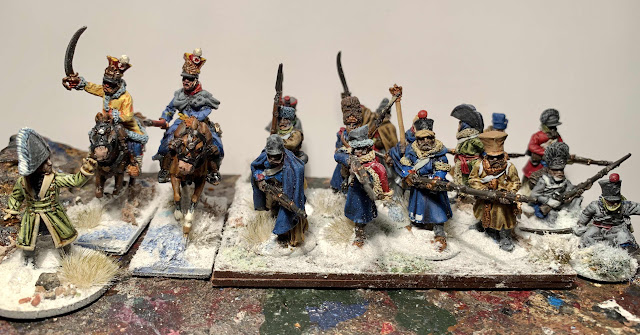 Infantry still WIP, but luckily I already had some ready 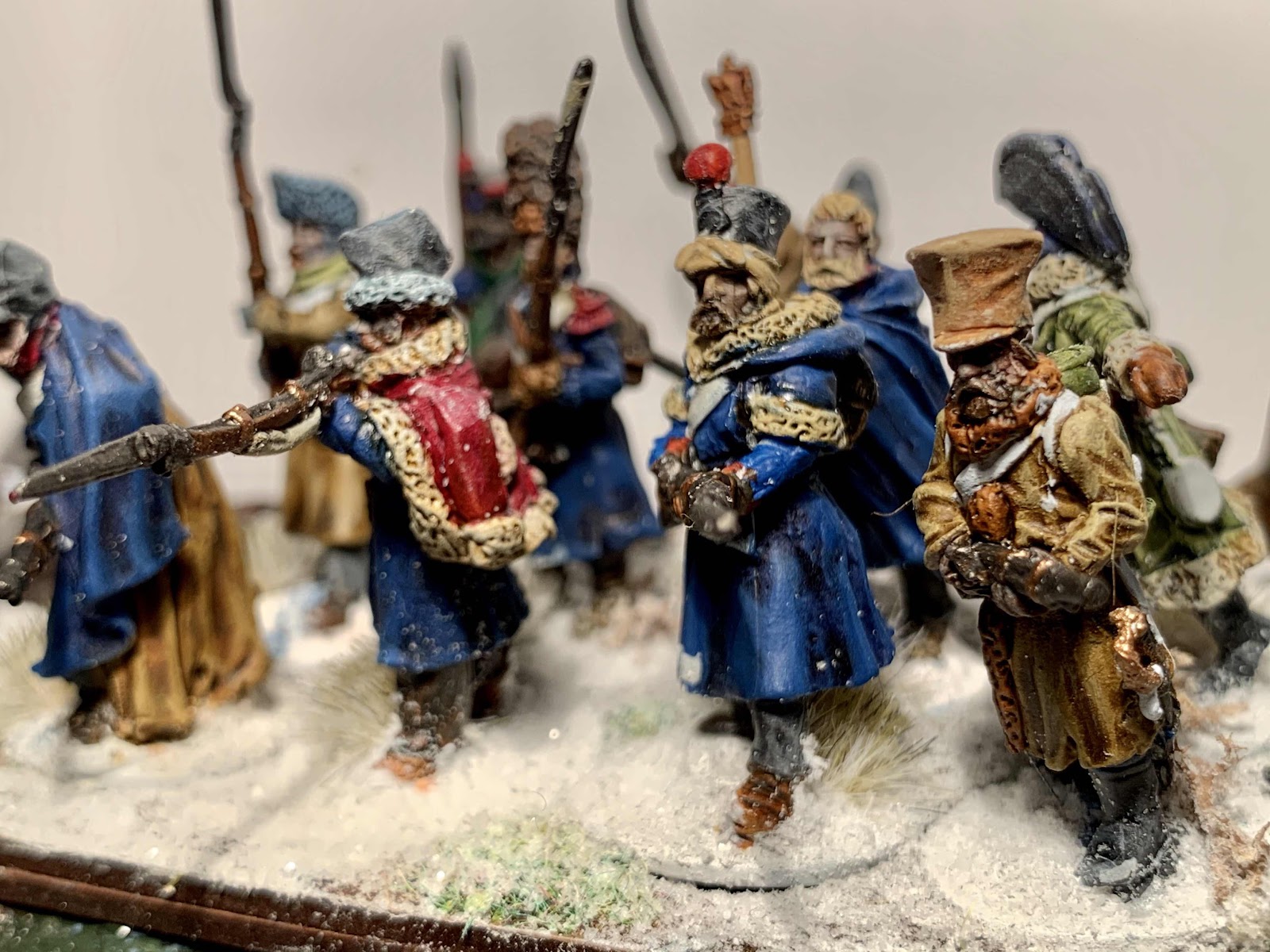 Besides the miniatures one needs playing cards for the activation and some tokens or indicators to show if unit is firing controlled volleys, whether they are loaded or not, etc.
For these needs I had some mdf tokens. 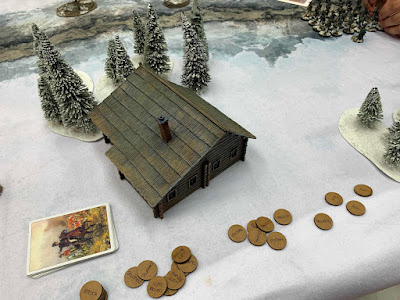 Our main target for the game was to try out and learn the rules. We chose a scenario from WSS issue 86. It’s a scenario designed by my Swedish Wargames friend and blogger Michael Leck aka Dalauppor for the Russo-Swedish war 1808-1809. It’s about a rear guard action and hence suited to our theme as well, Anyhow, we decided to make our own army lists, instead of using the ones in the magazine.
My deployment point was the bridge, where my single cannon also deployed. Should the enemy advance within 18" the would have to retreat and could only resume firing once there were no enemies within 18". 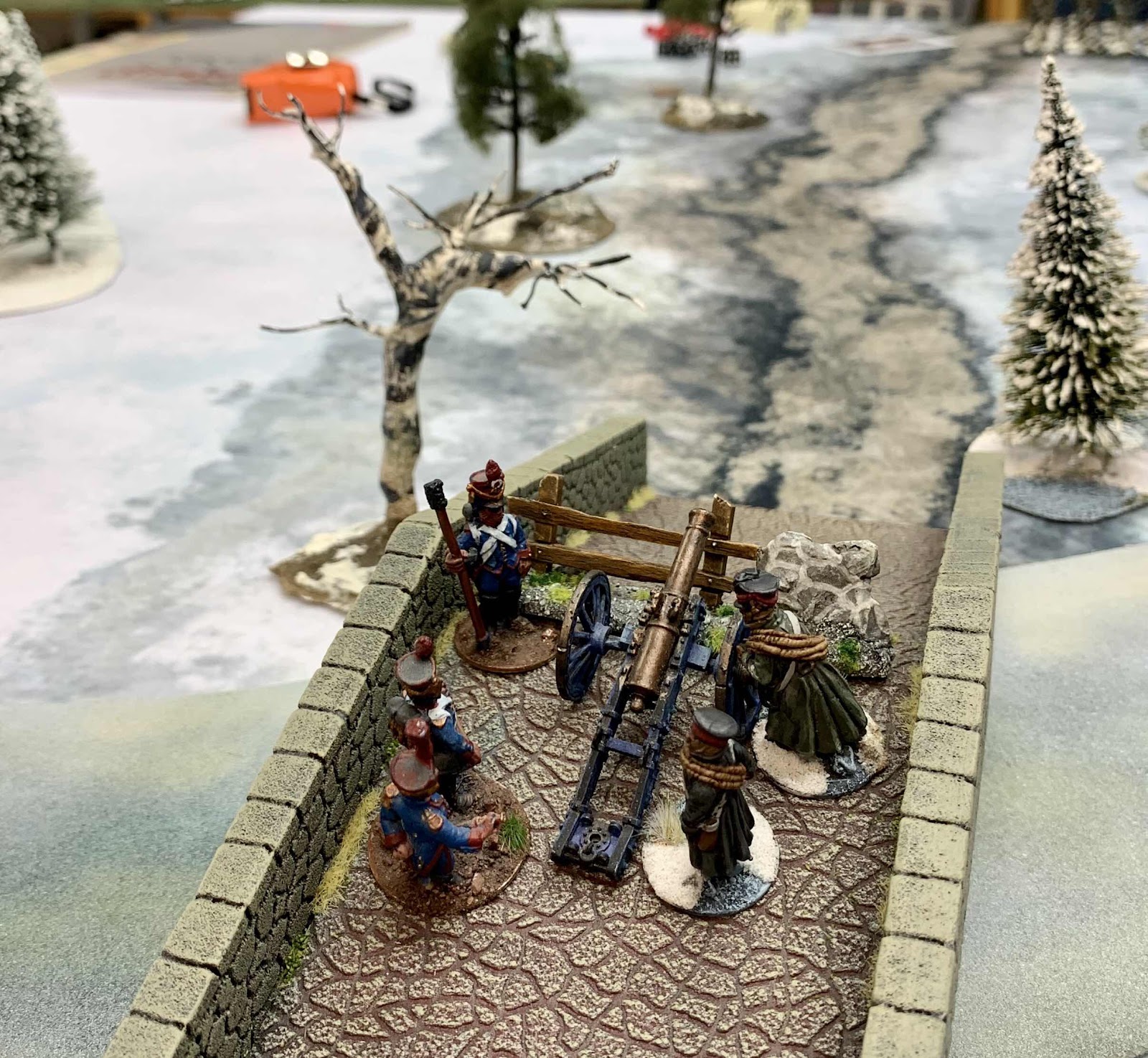 I also digged up my old Napoleon diorama to act as my second deployment point. 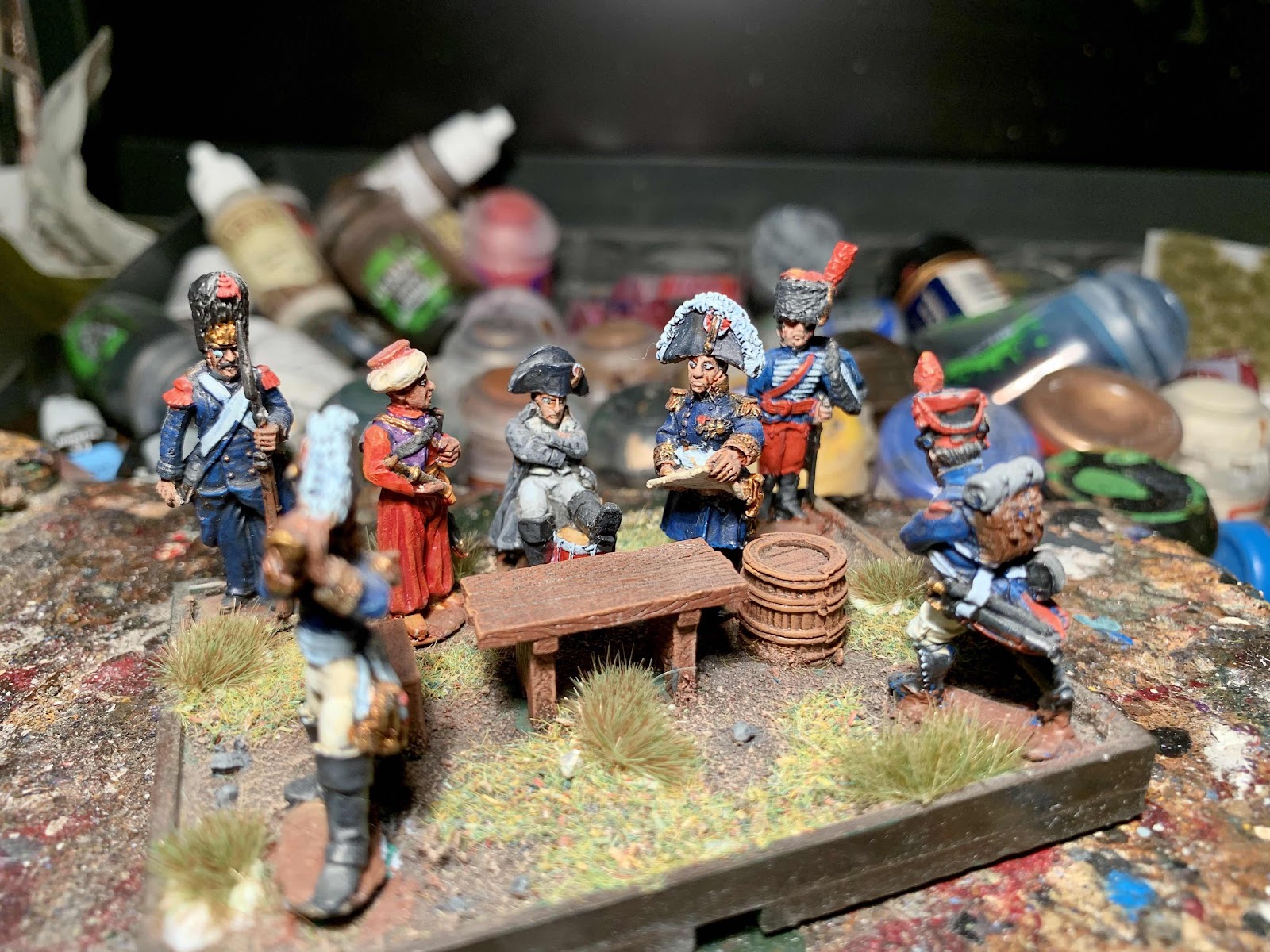 Russian infantry and artillery march into the battlefield. Jaakko had the option to deploy his cavalry too, but opted to keep them in reserve for now... 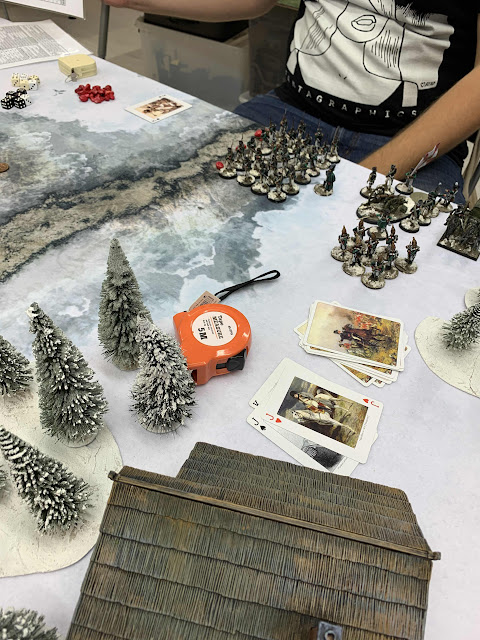 My artillery lands a telling blow on the Russian infantry column and plenty of disorder is placed on them! 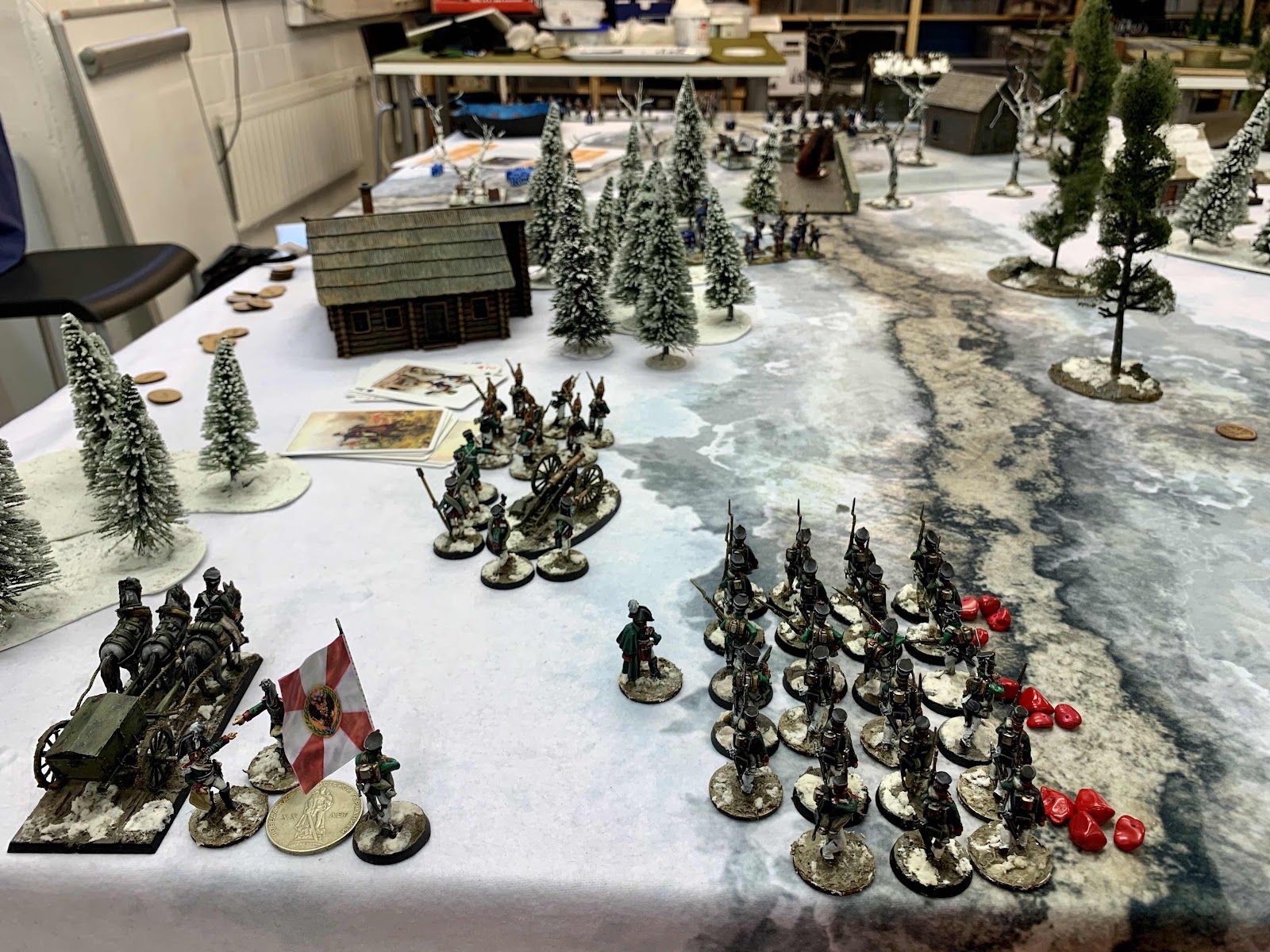 Russian Jaegers also jump out of the woods and rapidly move forward to take some potshots at my cavalry... 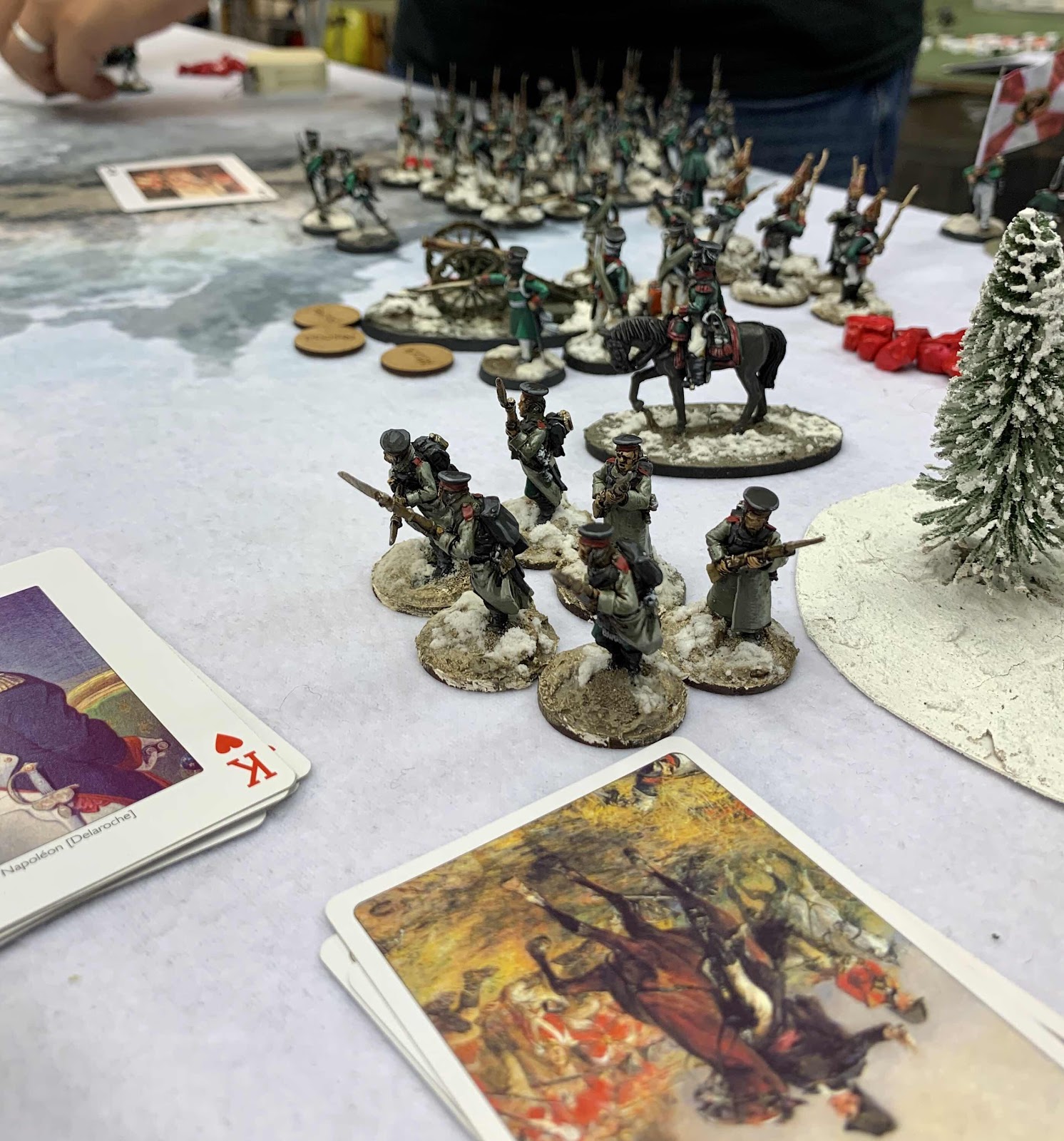 Most of my army (actually everything I think) gets deployed before tiffany card comes up. 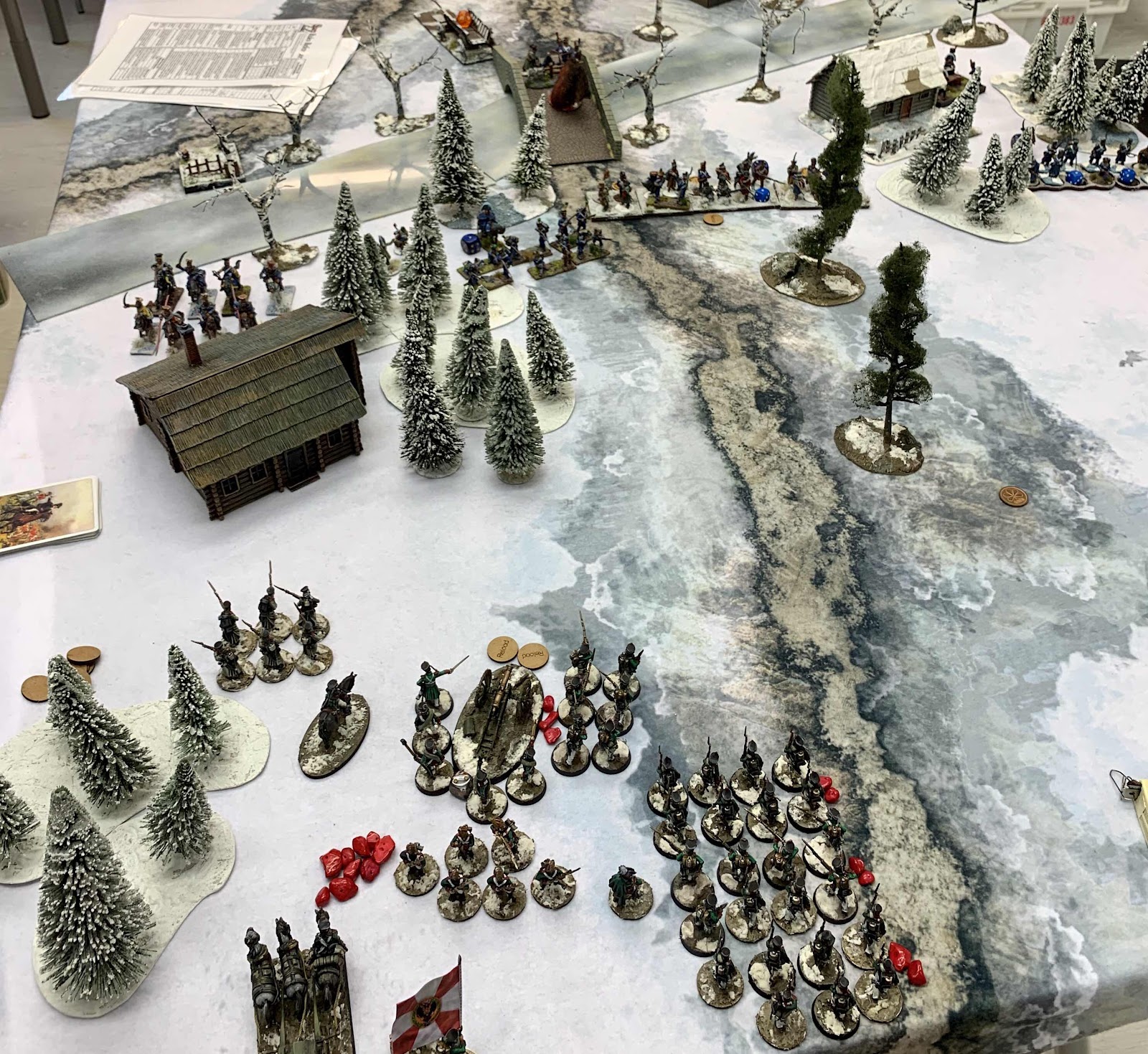 Angered by Jaeger harassment my Polish Lancers ride them over and later on continue their rampage to take out the enemy artillery crew, whom tried to evade, but were caught up! 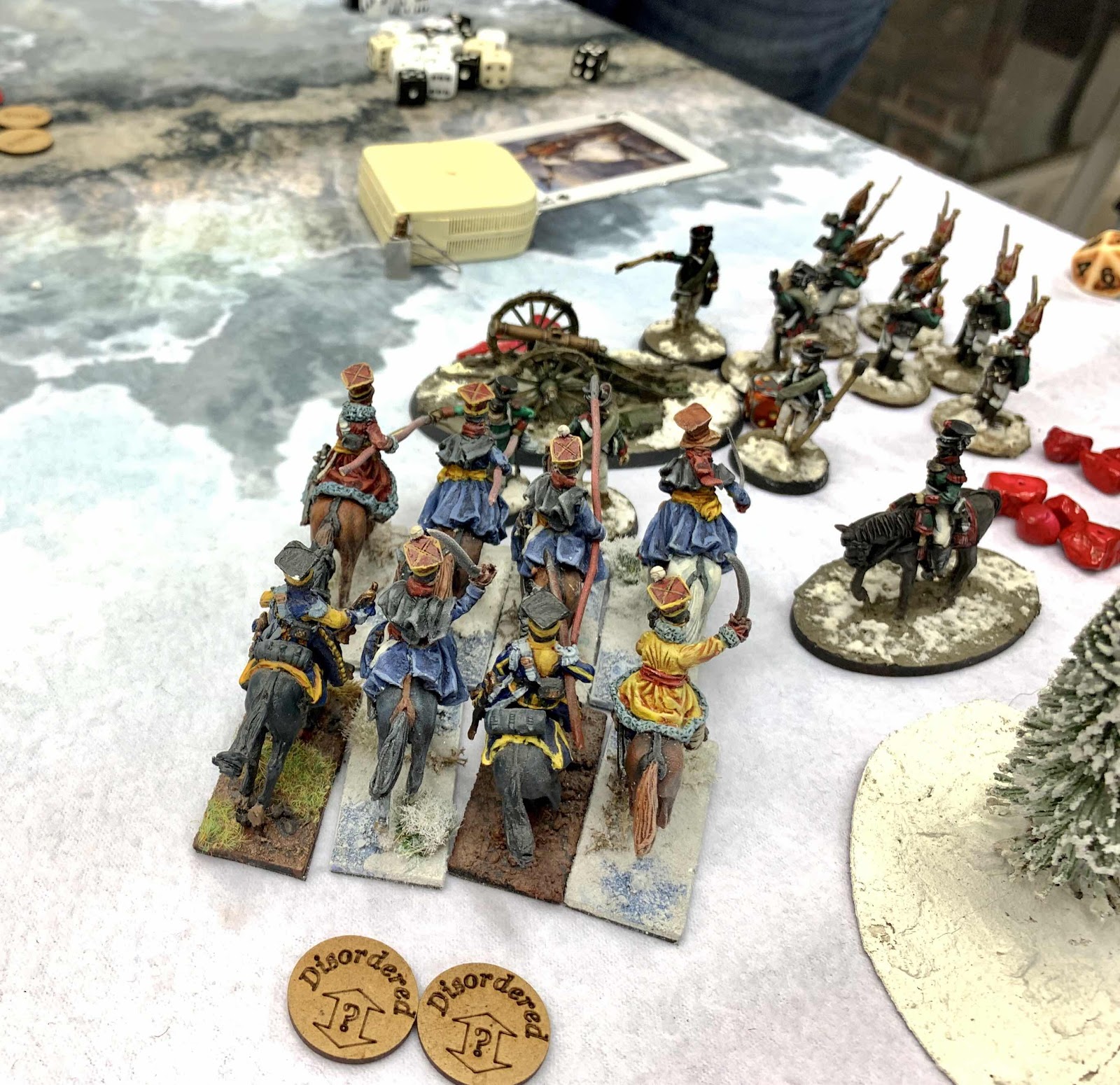 My cavalry has gotten behind the enemy main battle line and causes a serious havoc! Eventually they are shot at a lot and spent... just before reaching the enemy deployment point. A sacrifice, but a worthy one! 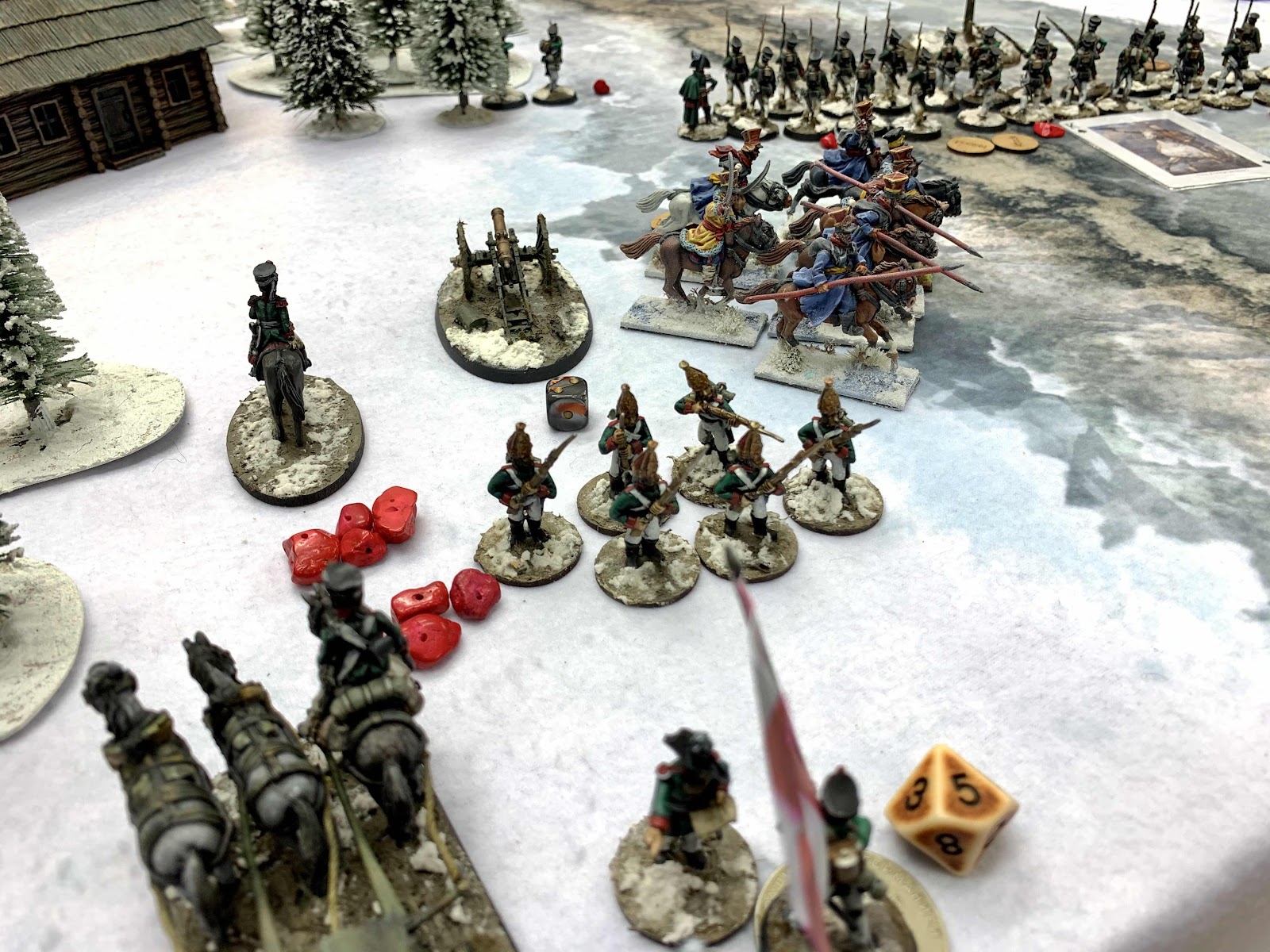 End of the Battle

In the meanwhile our firing lines have poured fire upon one another, but my slightly greater numbers are slowly winning the fight for me... finally Russian light cavalry also arrives... One of my officers is knocked out by a lucky shot, but my army physician is able to revive him. 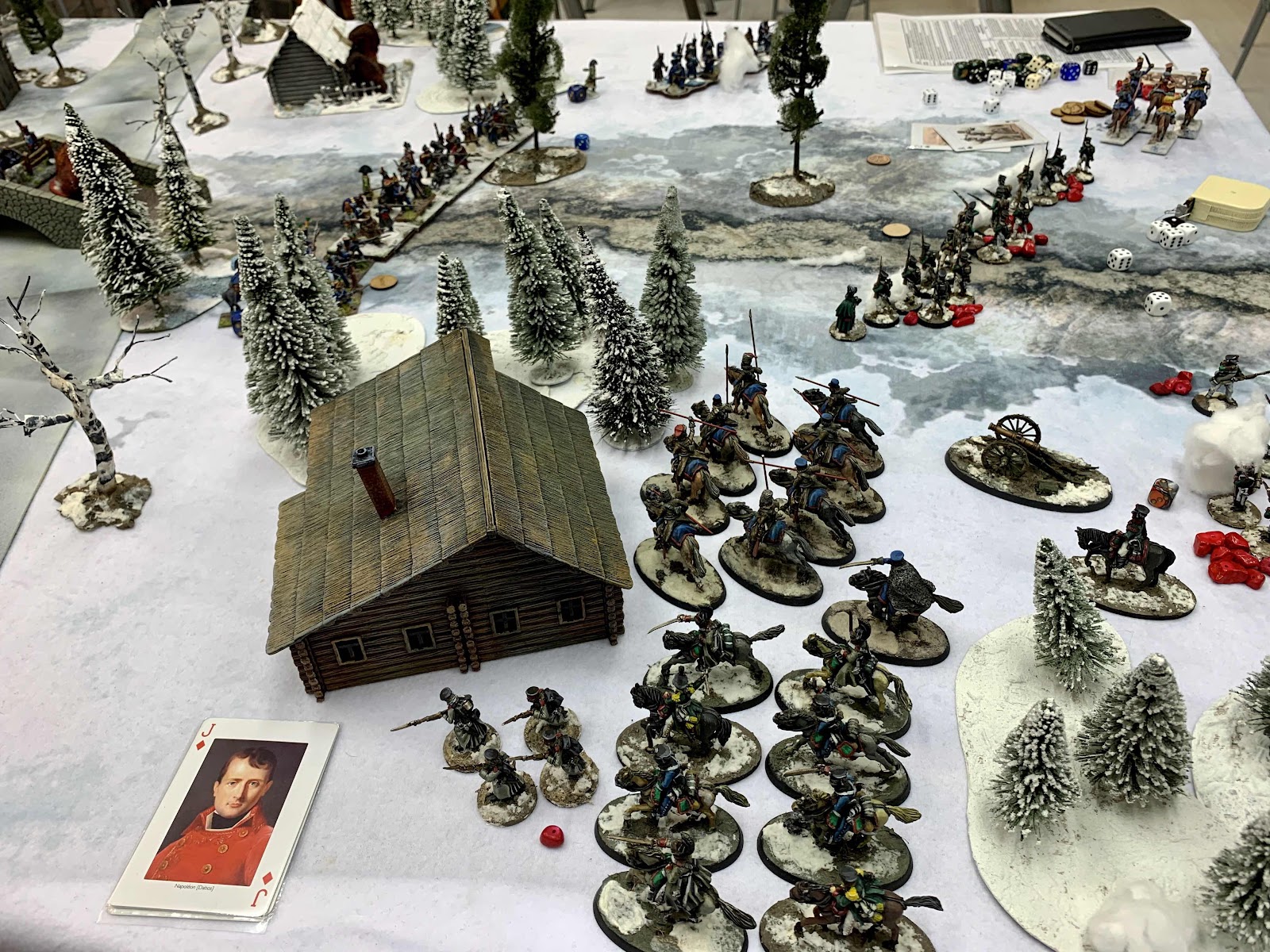 And the second unit of Jaegers manage an outflank... 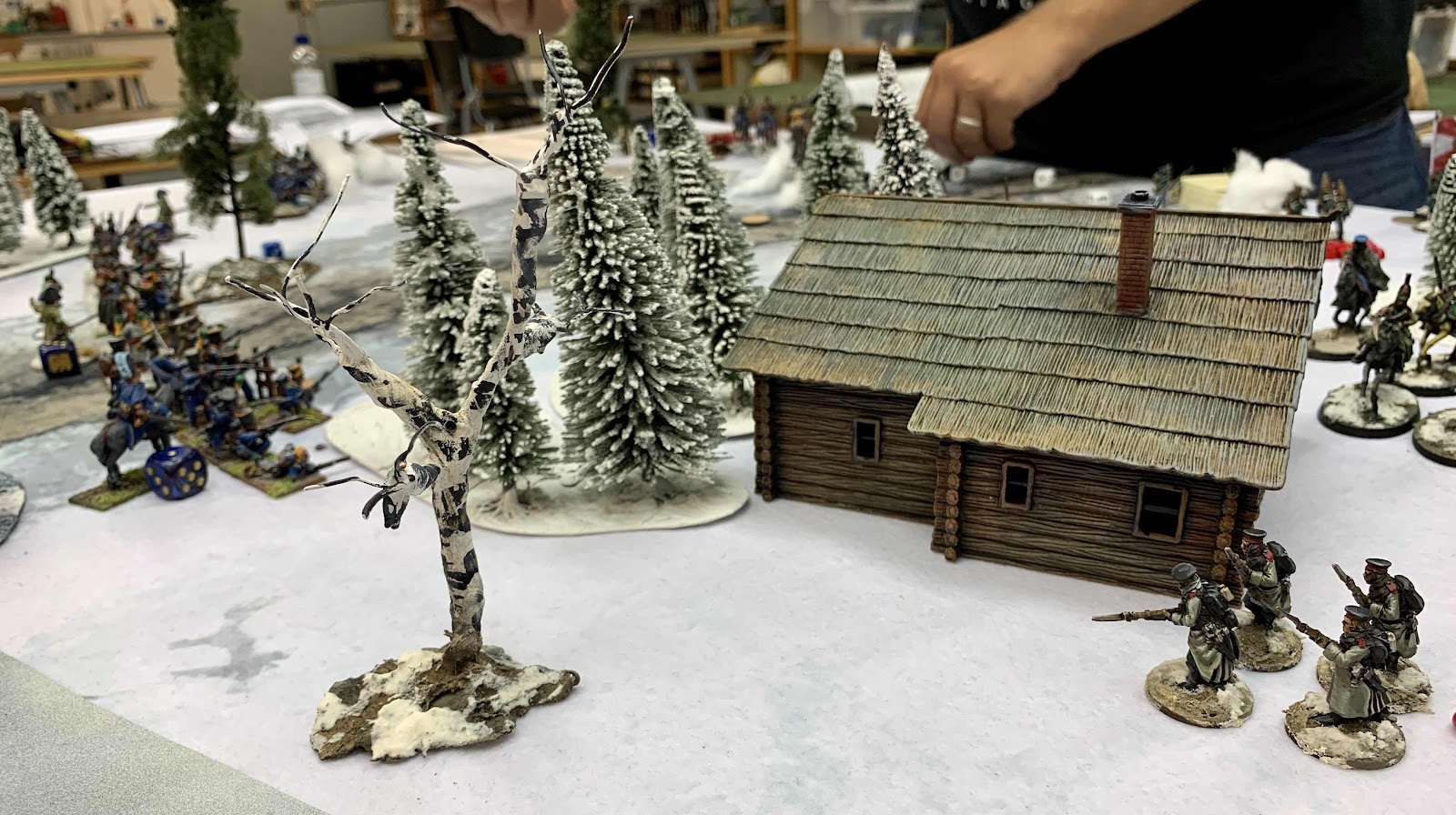 But it's all too late for the Russian cause, their main formation lies in tatters with their army morale broken. 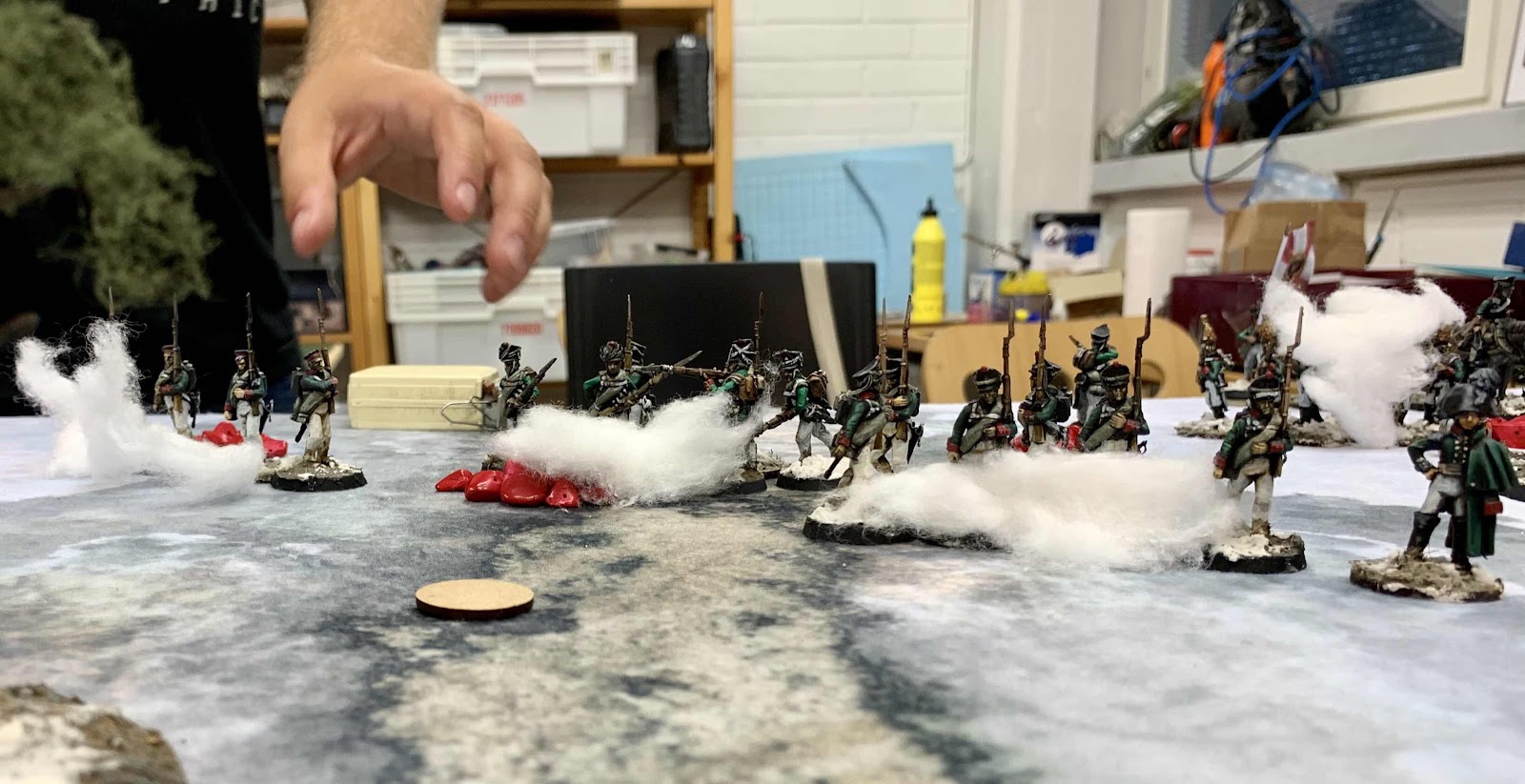